ATLANTA AIRPORT IN THE 1940S

Atlanta Municipal Airport entered the 1940s with a new control tower and administration building and traffic was growing rapidly as the airlines were awarded new routes, flying them with sleek, modern DC-3s and DC-2s.

The postcard below, circa 1940, shows the recently completed control tower that was added to the south side of the existing terminal opened in 1932. Note the observation deck on the second level. The Delta aircraft in the foreground is a Douglas DC-2 and a quartet of Eastern Air Lines DC-2s can be seen behind it. The planes are facing opposite directions because Delta's DC-2s, bought from American Airlines, had the passenger door on the right side of the fuselage while Eastern DC-2s had the door on the left side. Delta operated a total of four of the 14-passenger DC-2s during 1940 and 1941. They were replaced by larger and more economical DC-3s. The Delta aircraft pictured here, along with several other DC-2s purchased from American Airlines, was featured in the film A Thousand Hours while still in operation with American. The Eastern DC-2 NC13736 directly behind the Delta aircraft still exists and is awaiting restoration in Albury, New South Wales. 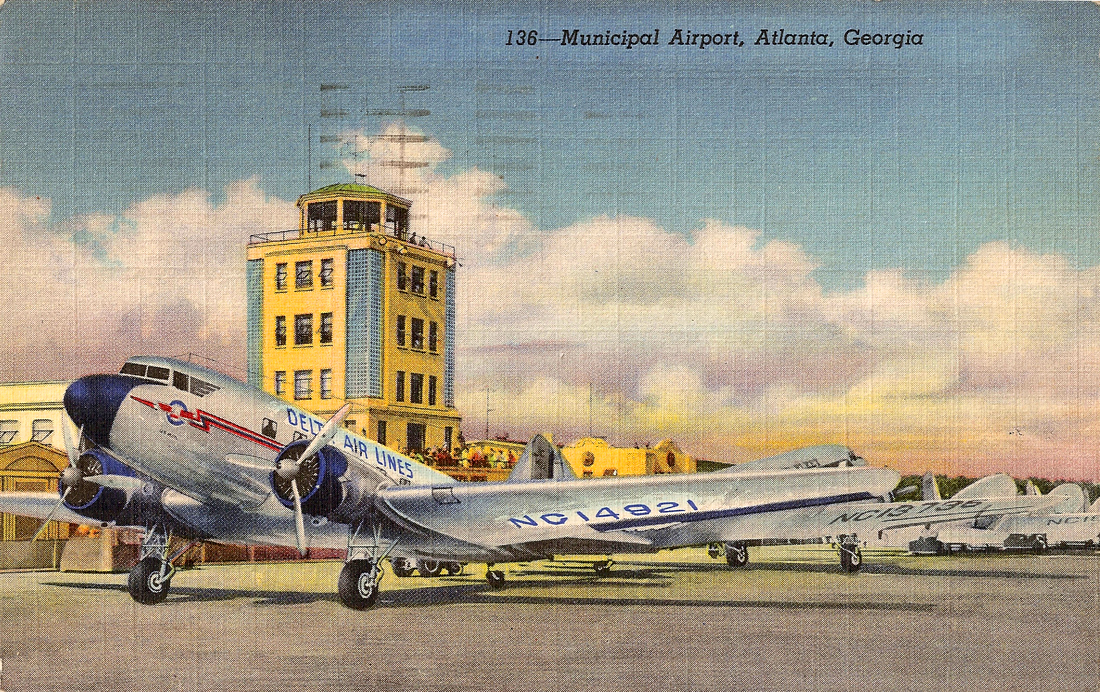 An aerial view of Atlanta Municipal Airport taken in 1940 shows three paved runways, the longest of which was only 3,500 feet long. Mayor William Hartsfield was largely responsible for the improvements made to the airport following two incidents in 1939 in which aircraft had run off the short runways. Virginia Avenue runs across the top of this photo and remnants of the old racetrack can be seen at the bottom. 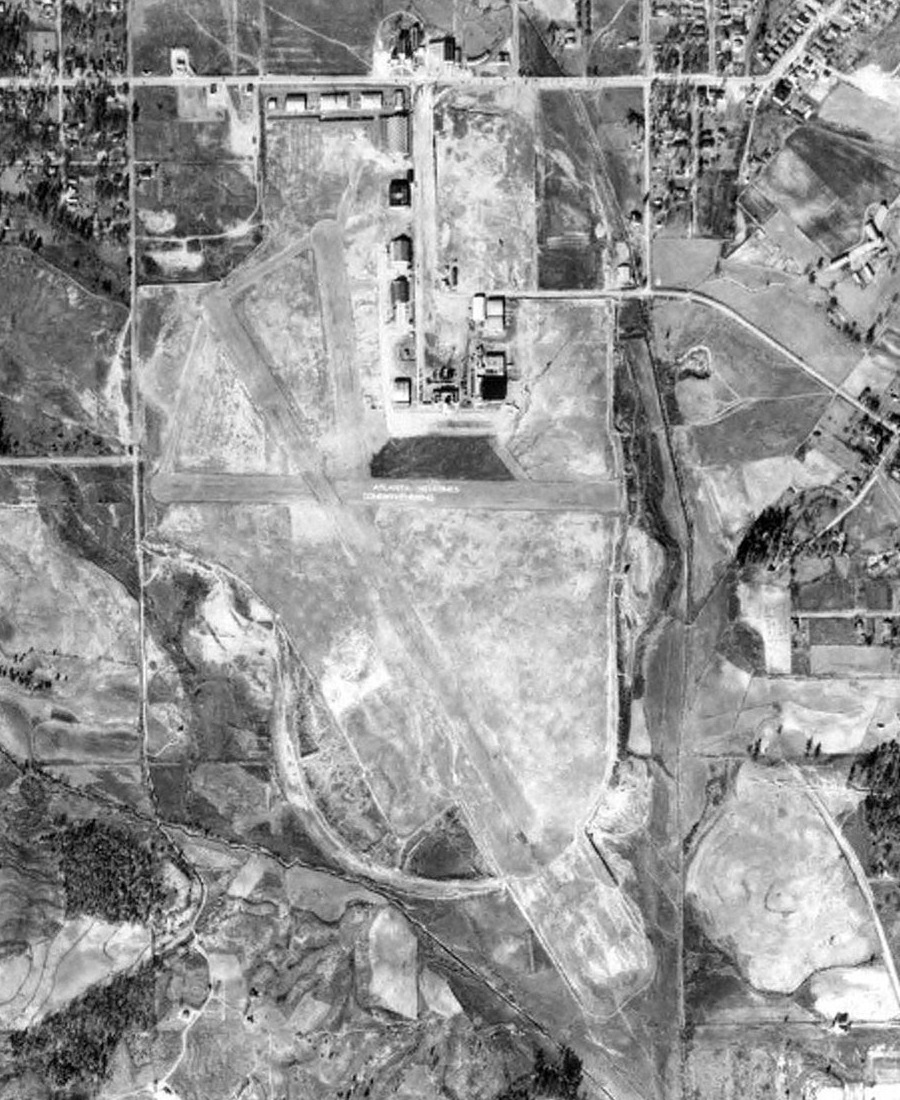 The following series of photos taken around Atlanta's Municipal Airport terminal come from Georgia State University's Digital Collections and are dated 1941, although with the help of R.E.G. Davies' books "Eastern : An Airline And Its Aircraft" and his similar Delta Air Lines book, I was able to determine this was indeed 1940. The people in these photos are wearing short sleeve shirts, the sun is directly overhead, and there are leaves on the trees, leading me to believe these were taken in Summer 1940. In any case, these photos are fantastic!

The first three photos are facing east and show Delta DC-2s in the foreground and Eastern Air Lines DC-2s and a DC-3 behind them. 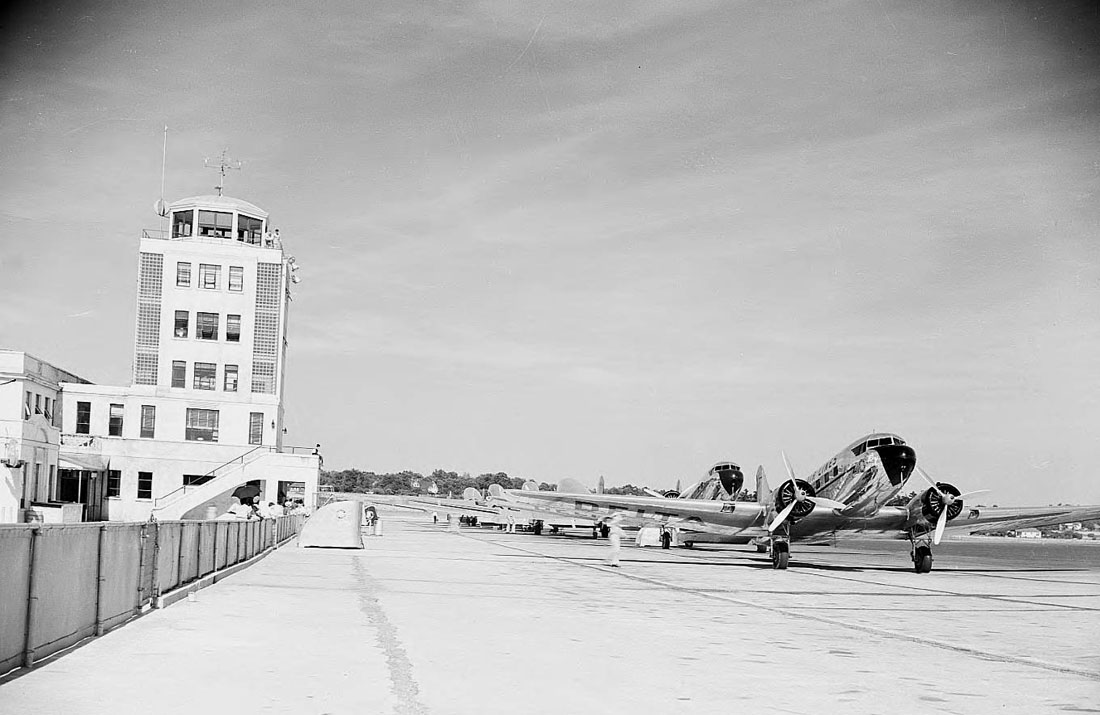 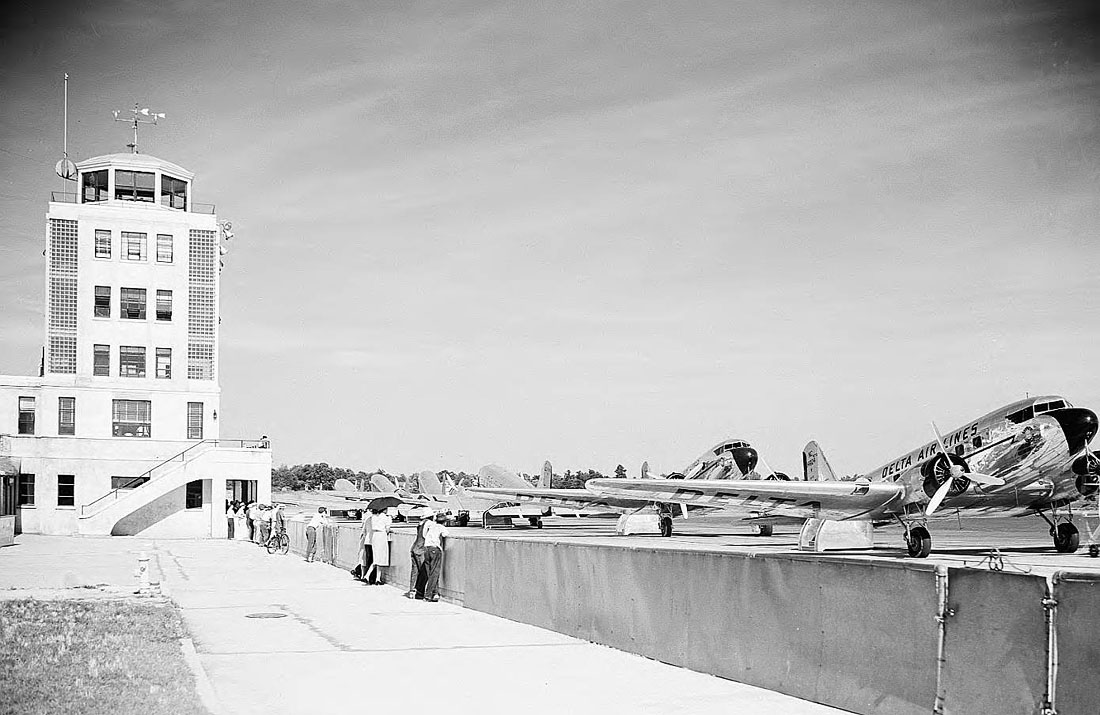 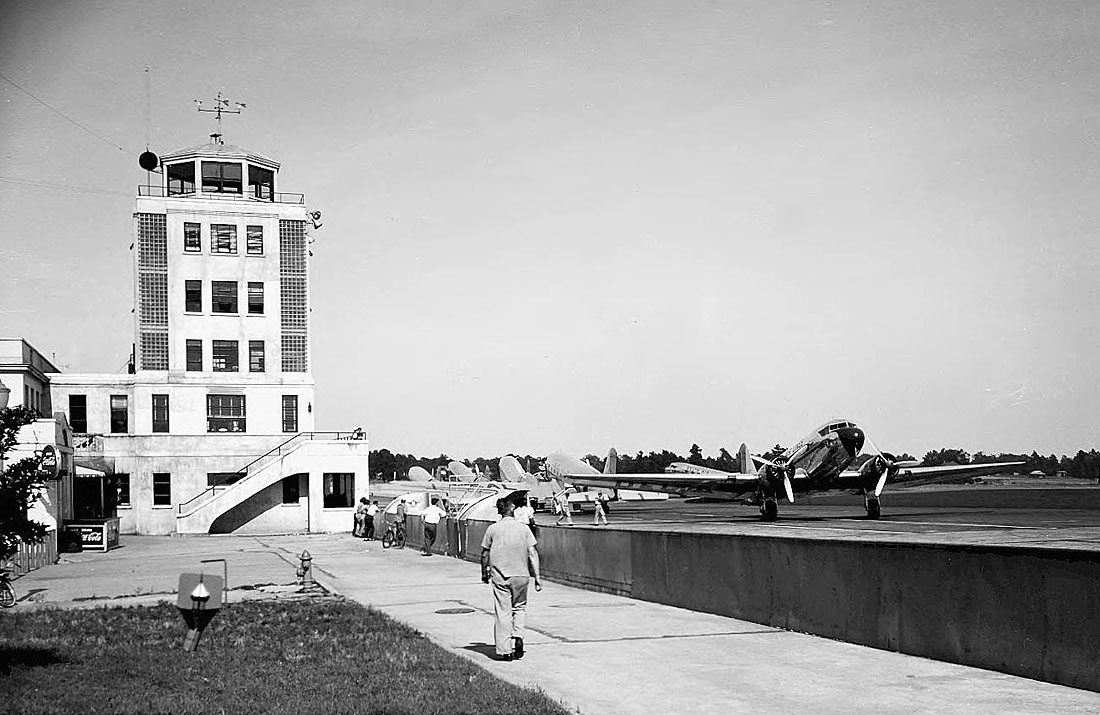 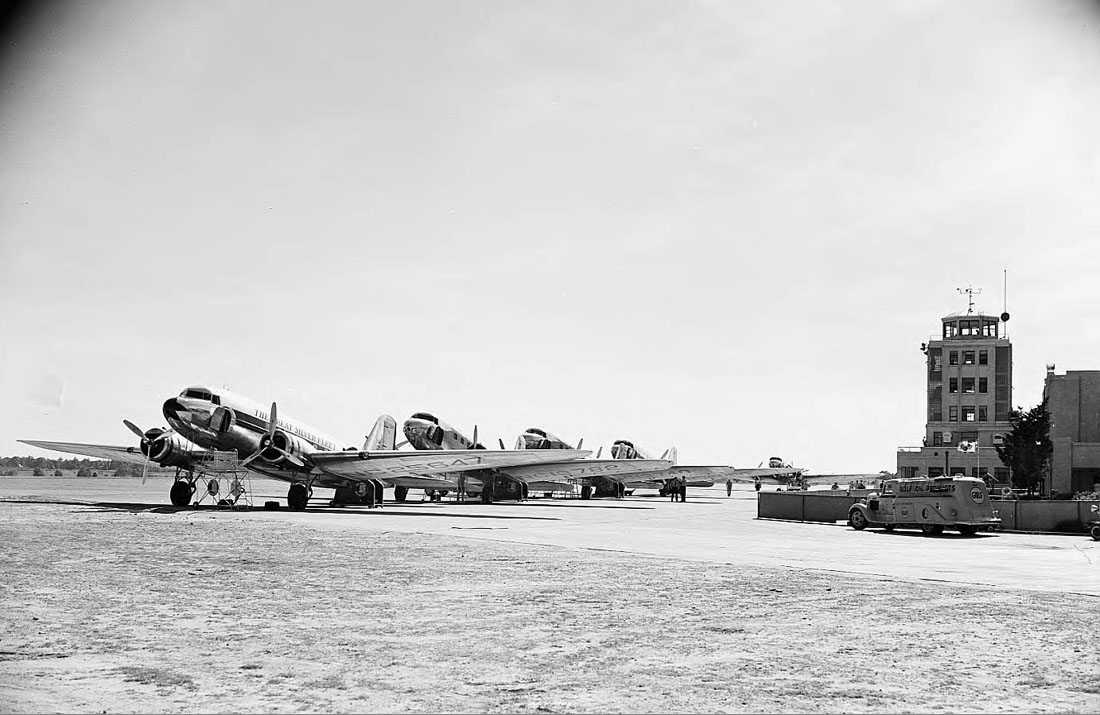 A side note: To the untrained eye, the DC-3 and DC-2s in the above photos look virtually identical. One of the main differences between the two is the width of the fuselage. The DC-2 had 2 seats in each row while the DC-3 had 3 seats across (in later years, commuter airlines such as PBA had 4 seats across). This illustration of the fuselage cross-sections is taken from R.E.G. Davies' Eastern book. 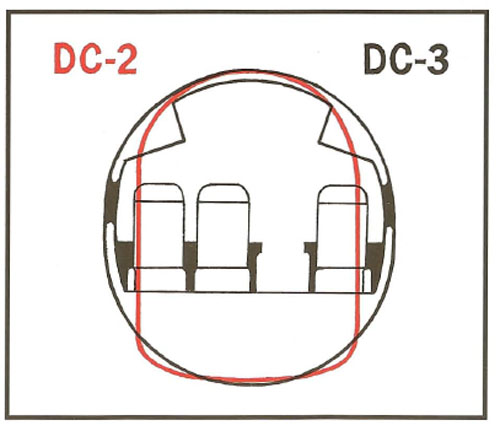 Here's a rare shot of the control tower interior from 1940, courtesy of the Atlanta Journal-Constitution. Their caption read: "J. H. Boyd, radio operator of the Communications Station, with a few of the teletype machines which bring weather data and other airways messages from all over the United States. In case of war these machines could handle military communications." Teletypes and other technology were improving although in 1940 planes were still tracked on large paper maps. 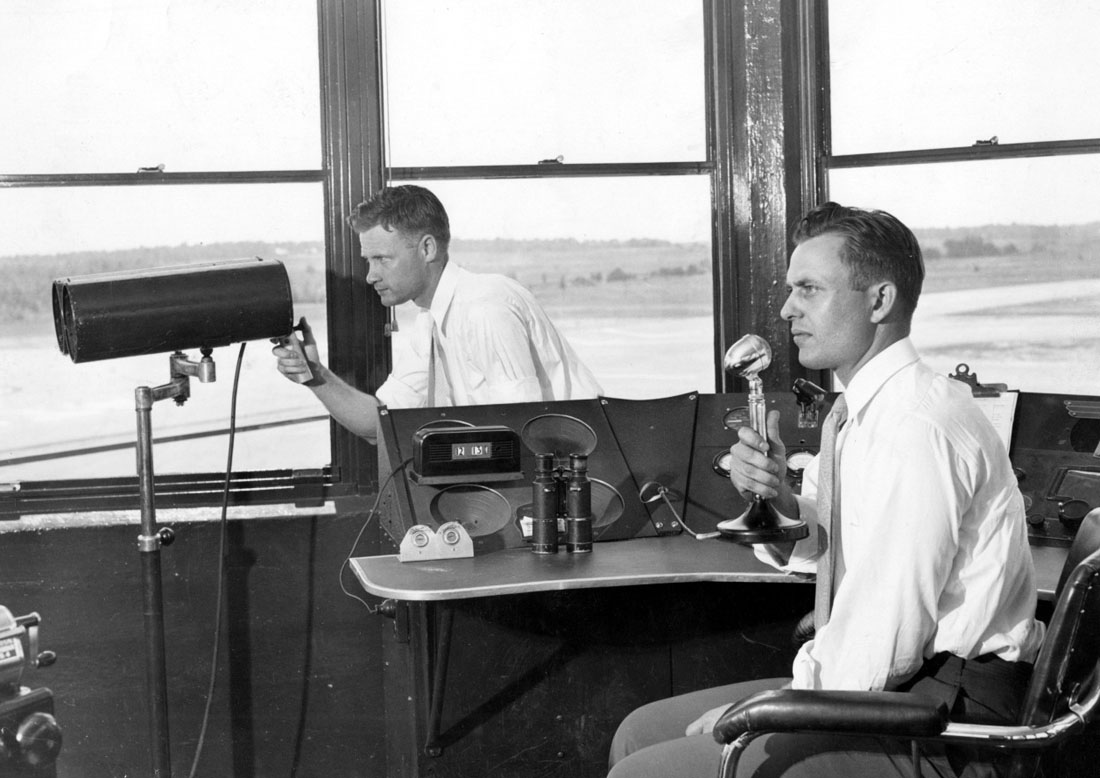 A circa 1941 shot of Eastern Air Lines DC-3 NC21743 parked at the 1932 terminal. The building in the background at center was the Eastern Air Transport building and was Atlanta's first passenger terminal during 1930-32. 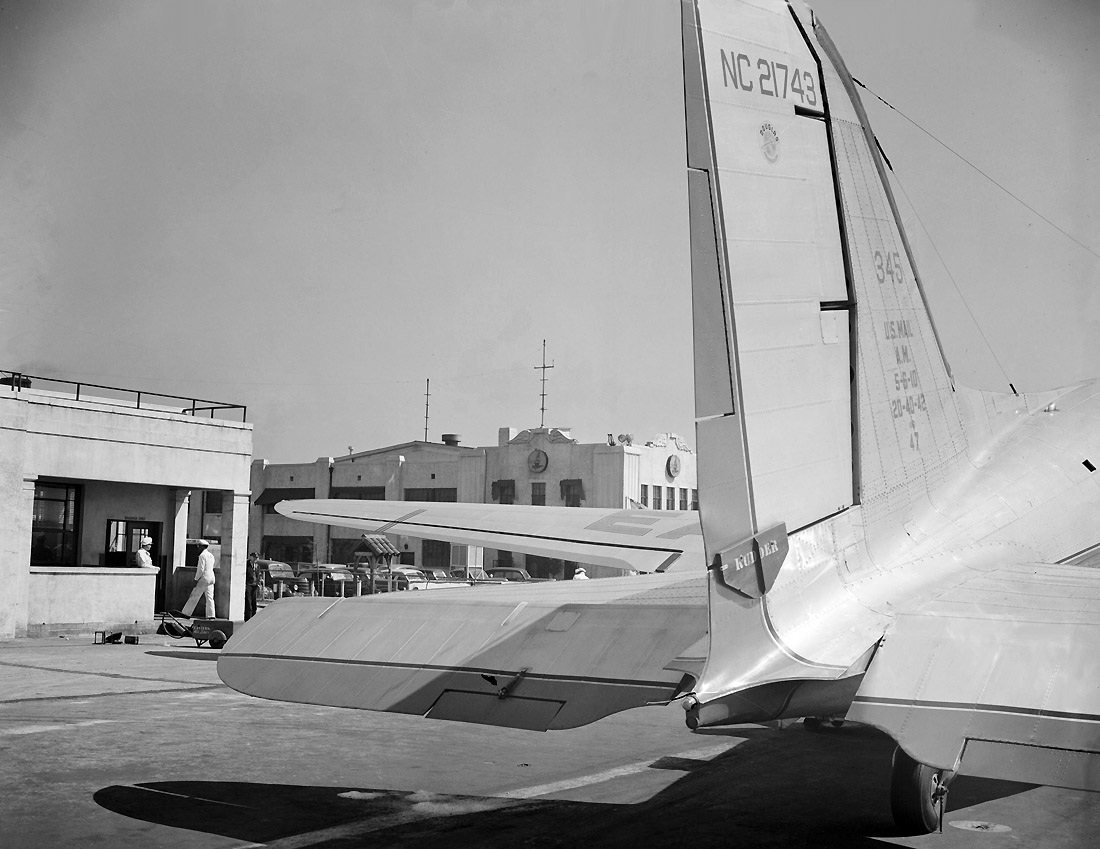 A great little architectural detail of the former Eastern terminal from the above photo. 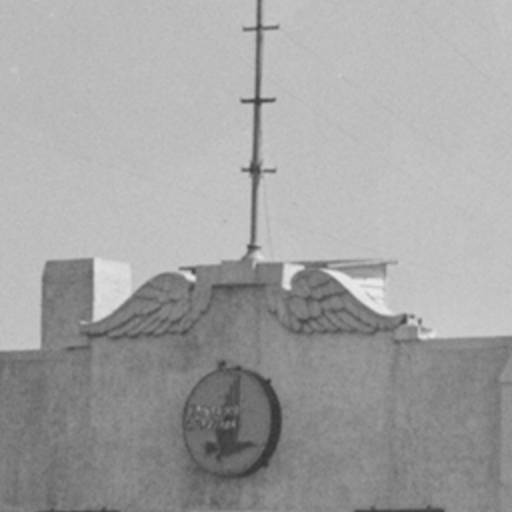 A magnificent view of Delta DC-2 ship 31 at the gate in this photo dated January 1941. 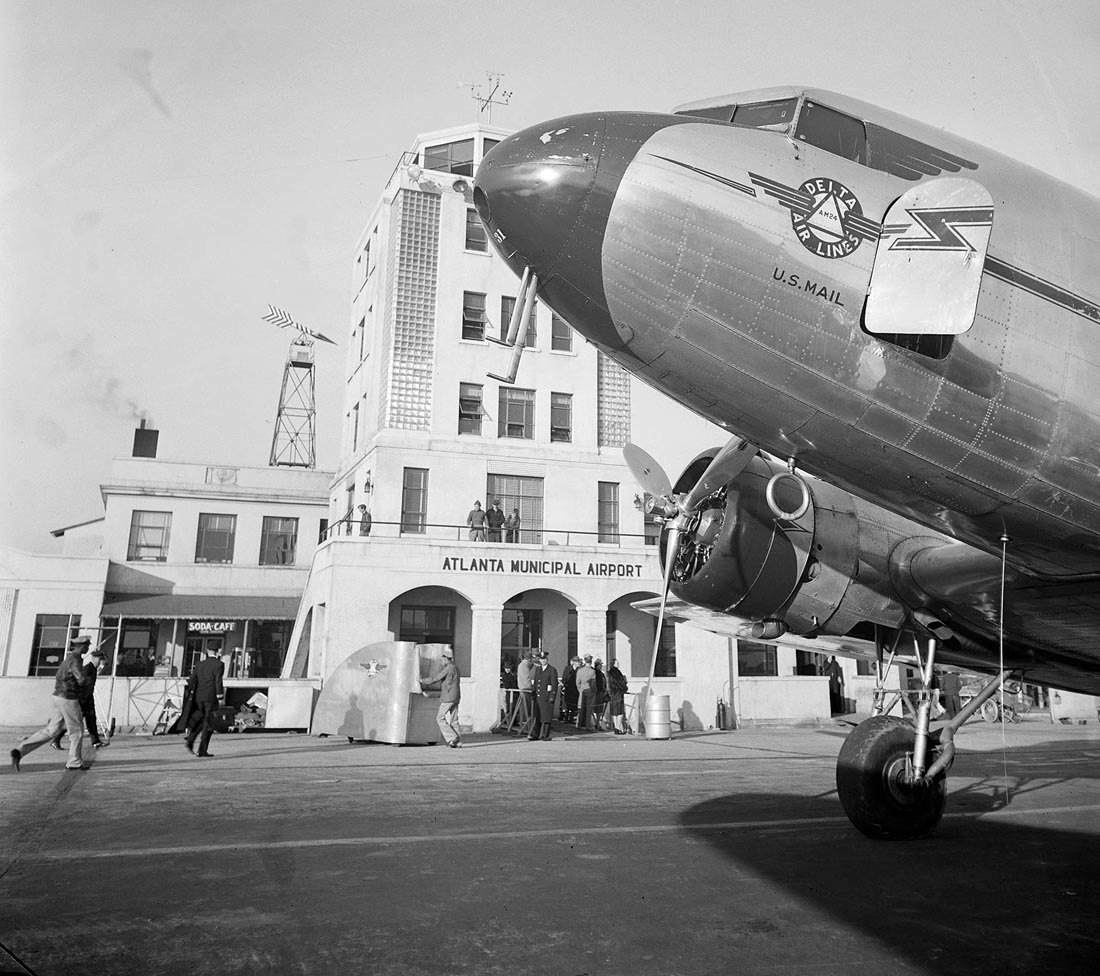 Delta added the 4-engine Douglas DC-4 to their fleet in February 1946. It was an enormous airliner for its time and its arrival in Atlanta attracted a large crowd. 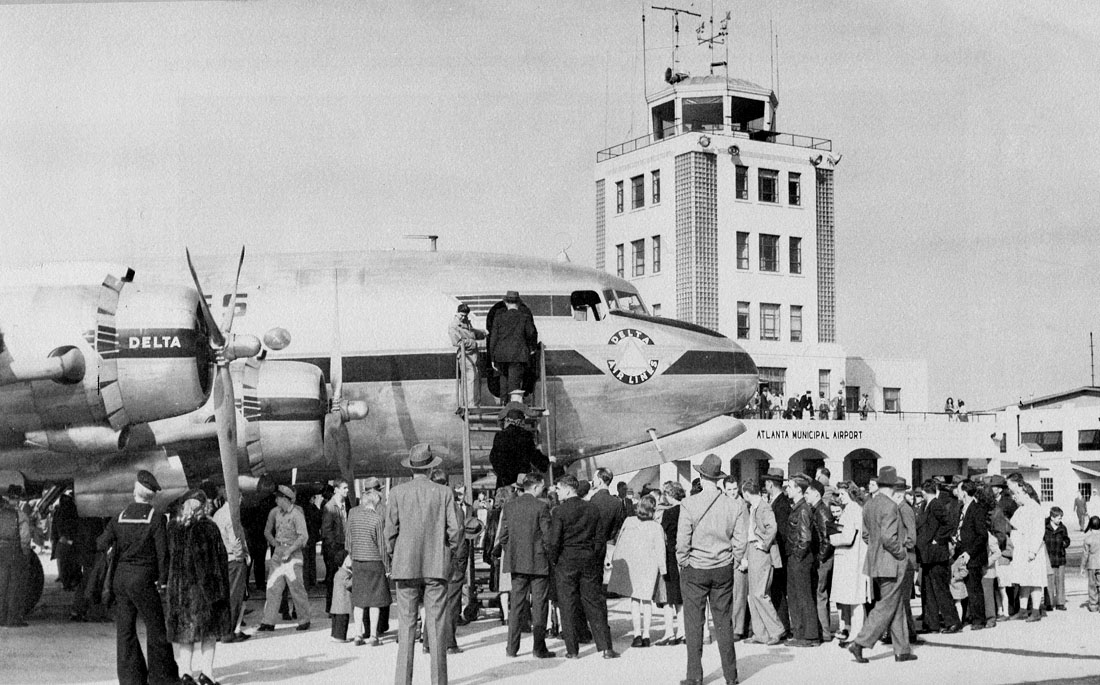 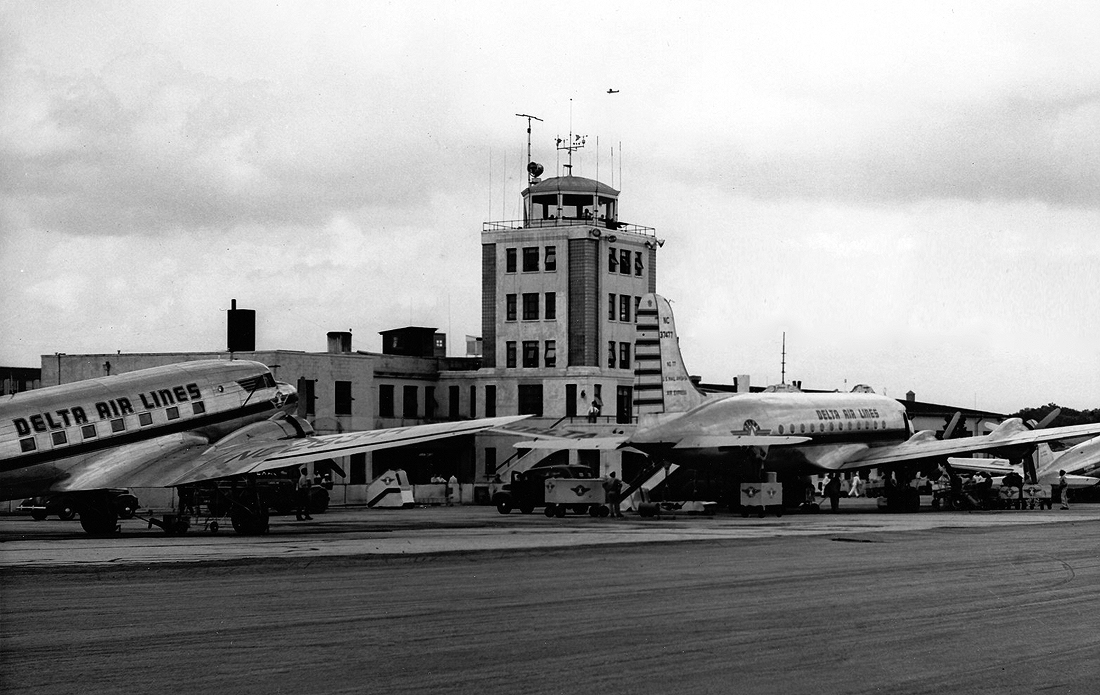 An Eastern DC-3 and a pair of DC-4s on the ramp at Atlanta Municipal on April 12, 1948, less than a month before the terminal closed. 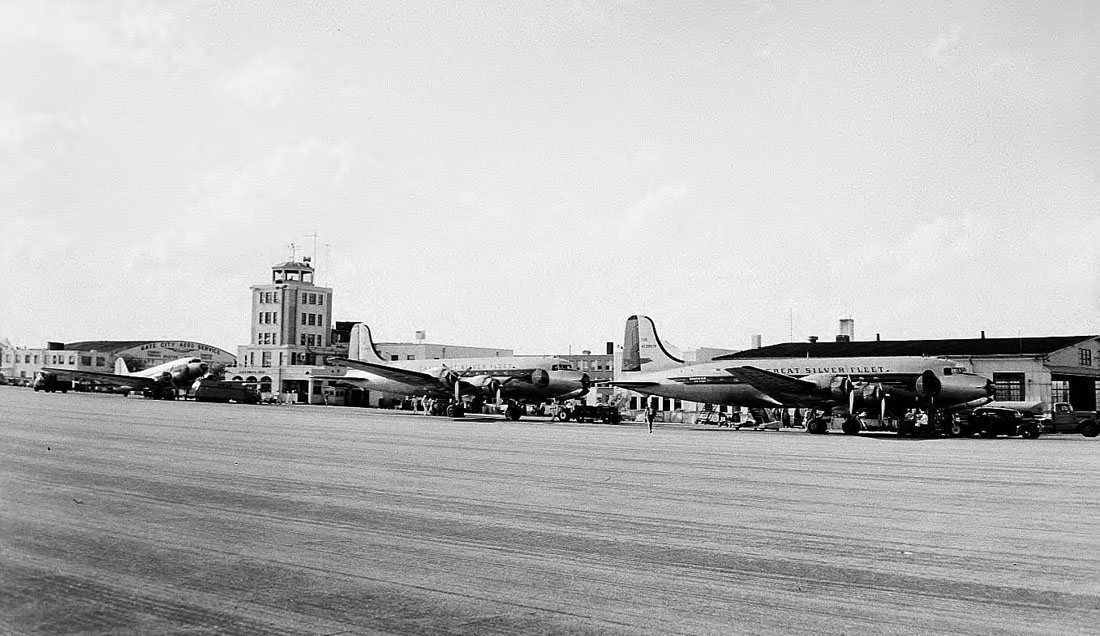 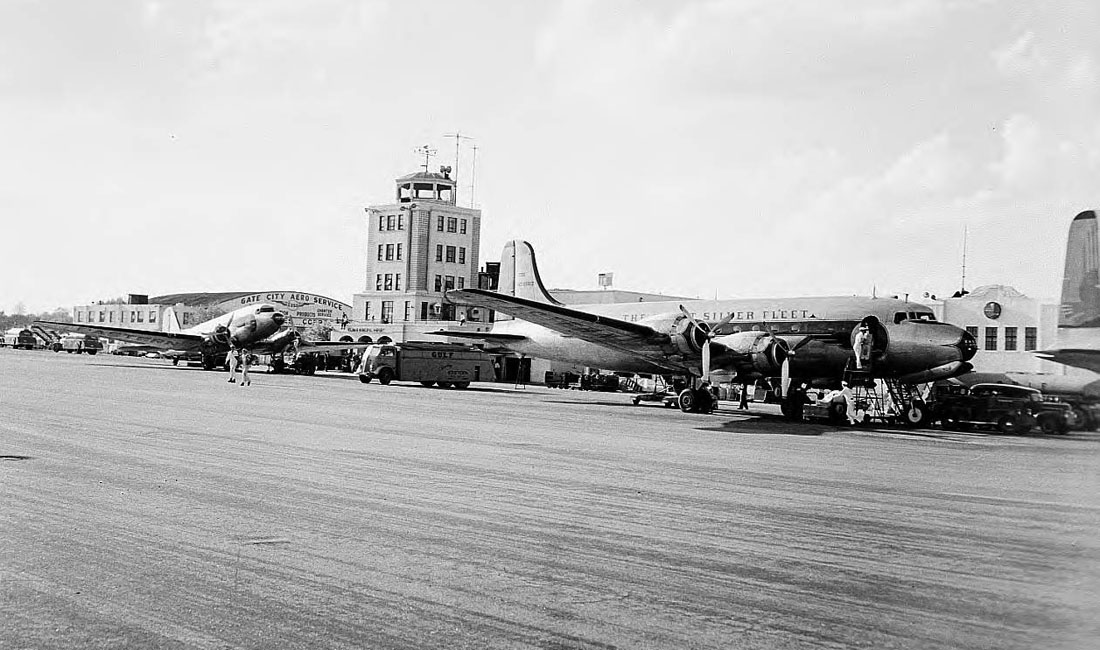 A classic shot of a Delta DC-3 in front of the Atlanta control tower in 1948. After the war it was apparent that this terminal built in 1932 was quickly becoming obsolete. The terminal was closed in May 1948 although the control tower remained in service until 1961. 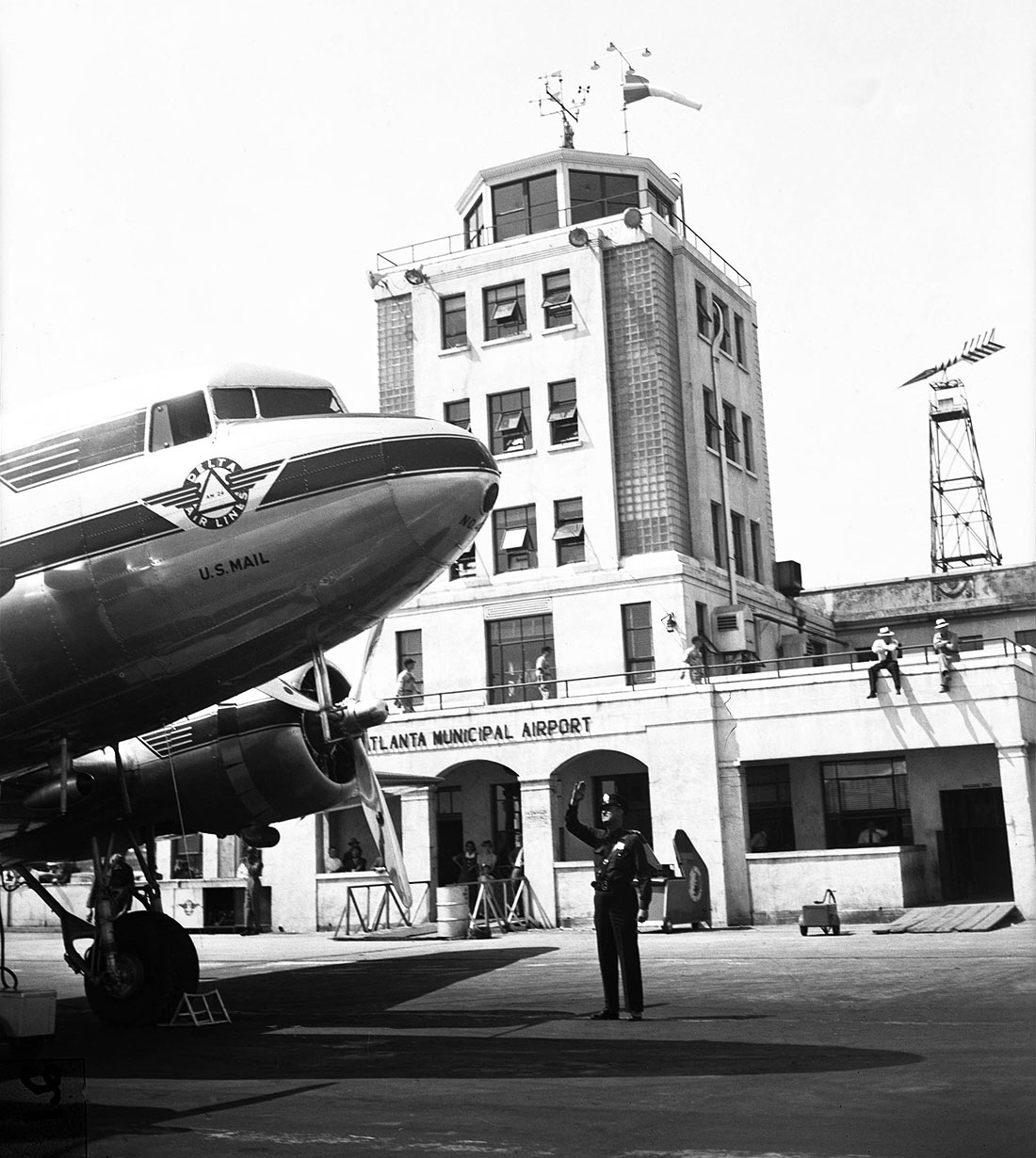 NEXT: THE TEMPORARY TERMINAL