What is there today?

The site of the 1961 terminal remained vacant for 3 decades and the footprint of the facility was easily seen in aerial photos and from the nearby Renaissance Concourse hotel. A ramp construction project began on the site in late 2013, removing the outlines of most of the old building. By 2018, the footprints of Delta's concourse E and the concourse F rotunda were still visible but most of these were removed during additional construction in 2019. The following photos show how the remains of the old terminal have disappeared in recent years and what is left today.
​
This is the view of the airport from the Virginia Avenue bridge in 1962.

A similar view from Google Maps 58 years later. The Renaissance Hotel is the large building at the center of the photo. It is a common misconception that the Renaissance was built on the site of the old administration tower. The hotel is actually about 200 yards north of where the old tower was and stands in what used to be part of the terminal parking lot. A RaceTrac gas station has replaced the old entrance ramp at right but a section of the former exit ramp is still intact between the trees at left.

The following then-and-now sets compare a 1968 aerial photo of the Jet Age airport with Google Earth views from the past decade, showing how the remnants of the old terminal have quickly disappeared in recent years.
1968 / 2012
This first set compares 1968 and 2012 when the footprints of the main terminal and several concourses were still clearly visible. Scroll back and forth to compare.
1968 / 2015
In this view from 2015, the area of the main terminal and Eastern's concourse A has been repaved, leaving no trace of the old outline. To the right, the footprints of Delta's concourse E and the concourse F rotunda are still clearly visible.
1968 / 2019
By 2019, new construction had obliterated all but half the footprint of the concourse F rotunda at right. A portion of the walkway to the front entrance of the 1961 terminal still remains in the parking lot at the top of the photo and, to the right of that, a concrete section of the old exit road can be seen in the otherwise asphalt street. This road sits on top of the old Candler racetrack home stretch.
As of 2020, an asphalt footprint of half of the concourse F rotunda still remains as does a portion of the old ramp surrounding it. Look closely and you can see part of the original, pre-1968 concrete taxiway embedded in the ramp.
I labelled this next photo way back in 2010. At the risk of being redundant, I'm leaving this here for those who want a deeper look at the area and how it has changed. The circa 2010 view from Bing is facing south and key areas are noted with letters.

A. The slightly darker concrete is the footprint of the old concourse E. This was paved over in 2019.
B. This grassy area is the former site of the main terminal. It was paved over in 2013, 29 years after the terminal was demolished.
C. The strip of grass at the top of the photo, below the aircraft tail, is the former site of concourse C/D. It was also paved over in 2013.
D. This dark asphalt stripe was the site of the old concourse A which housed Eastern Airlines gates. It too has since been replaced.
E. A short concrete section of the original 1961 terminal exit road remains, complete with what look like a few remaining '60s vintage light poles.
F. The sidewalk that runs through the middle of this parking lot once led to the main terminal entrance. This was still here in 2020.
G. The smaller tank on the left has been here since the 1940s and can be seen in photos of the temporary terminal.
H. The original 1961 exit ramp that led to Virginia Avenue from the terminal remains in 2020, completely surrounded by grass.
I.  The 1961 entrance ramp. (see the bottom photo too) The grass area to the right of that was the site of the circular Air Host Inn building. The entrance ramp was finally destroyed in 2018 when a gas station was built on the site. 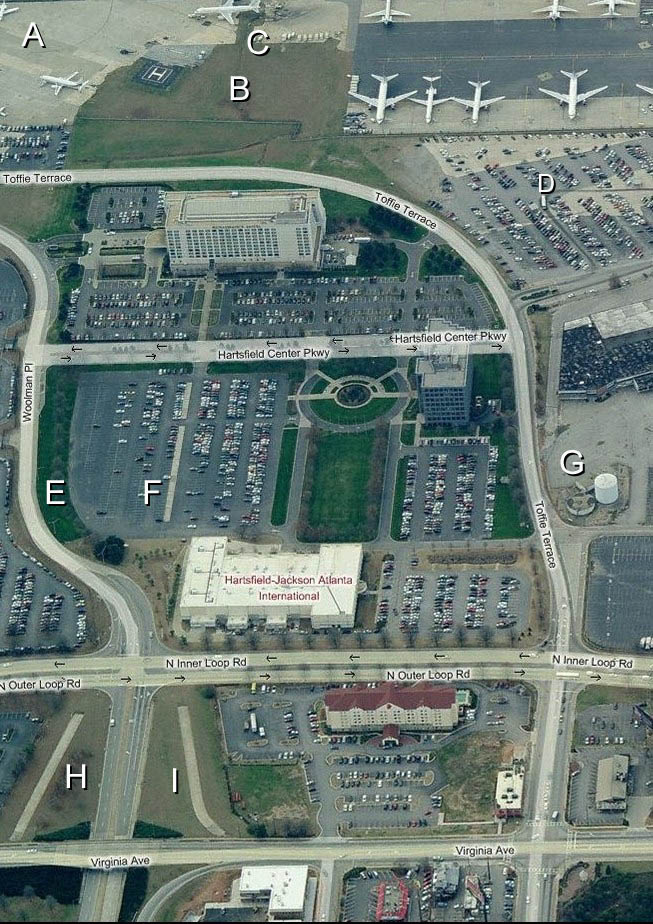 Here's the original ramp from Virginia Avenue to the old 1961 terminal entrance road that remained until 2018, completely surrounded by grass, an odd reminder of an earlier age. There is a gas station here today. The photo was sent in by Hannah over at the excellent Stumptown, GA blog. She also has fascinating photos of old cemeteries that have been engulfed by the ever-expanding airport boundary. Her latest project is Finding the Flint. Well worth your time to take a look! 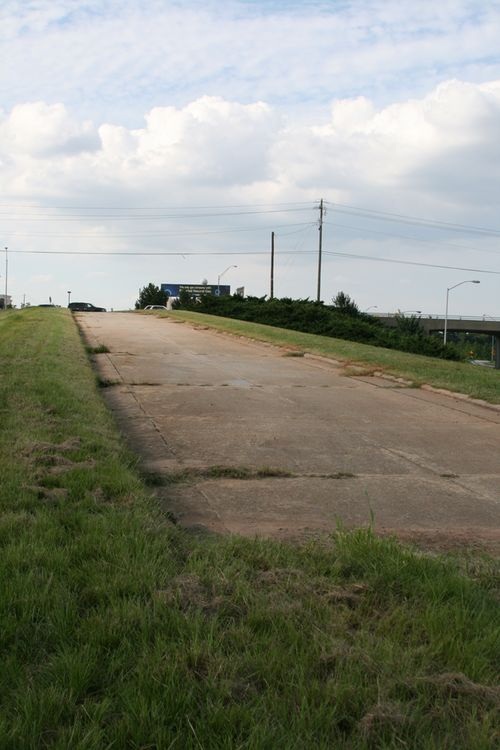 This is a 1965 postcard compared to a similar early 2013 view from Google Earth.
This last photo was taken from a balcony at the Renaissance Concourse hotel in 2008 and shows the site of the old terminal still vacant nearly 3 decades after it closed. This comes from flickr photographer Parrotheader. 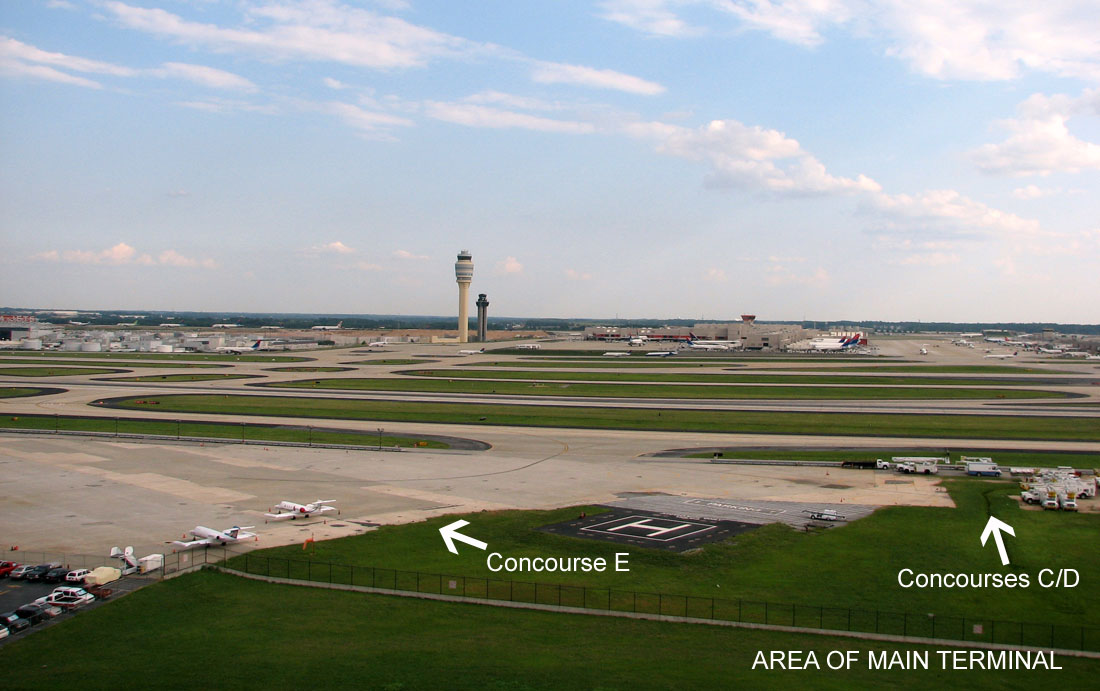