Atlanta's current midfield passenger terminal opened on September 21, 1980, more than four decades ago! So far, it has been in use 8 years longer than the previous 2 terminals combined. The following photos and maps document the terminal in its first full year of operation.

Delta Air Lines already operated the world's busiest connecting hub at Atlanta's 1961 terminal. With the advent of deregulation in 1978 and the opening of midfield in 1980, they expanded their ATL operation to unprecedented levels. Within months of the new terminal opening, it was not unusual to see every gate occupied at concourse A. (A similar color photo can be seen HERE.) From the Atlanta Journal-Constitution Photographs Collection. 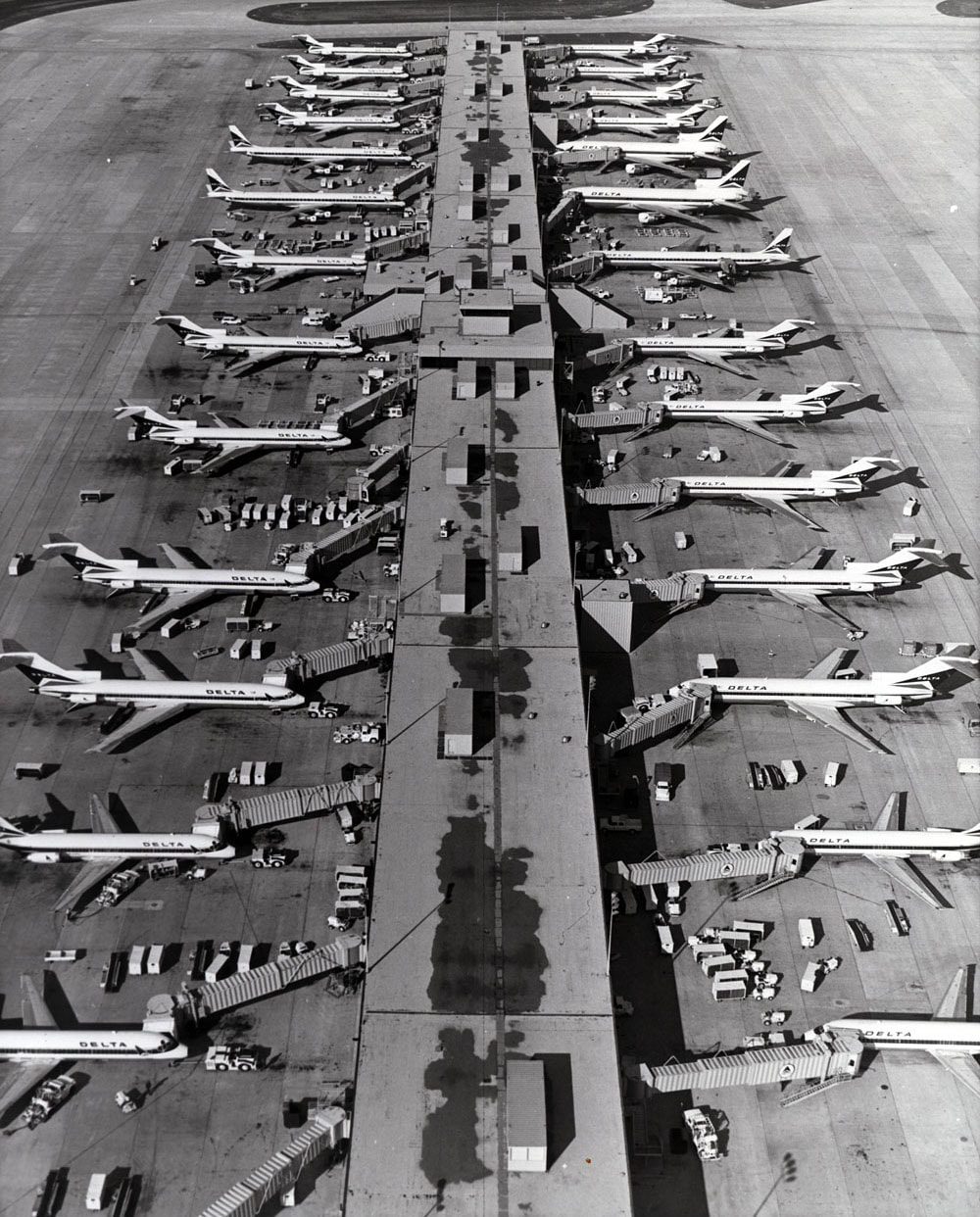 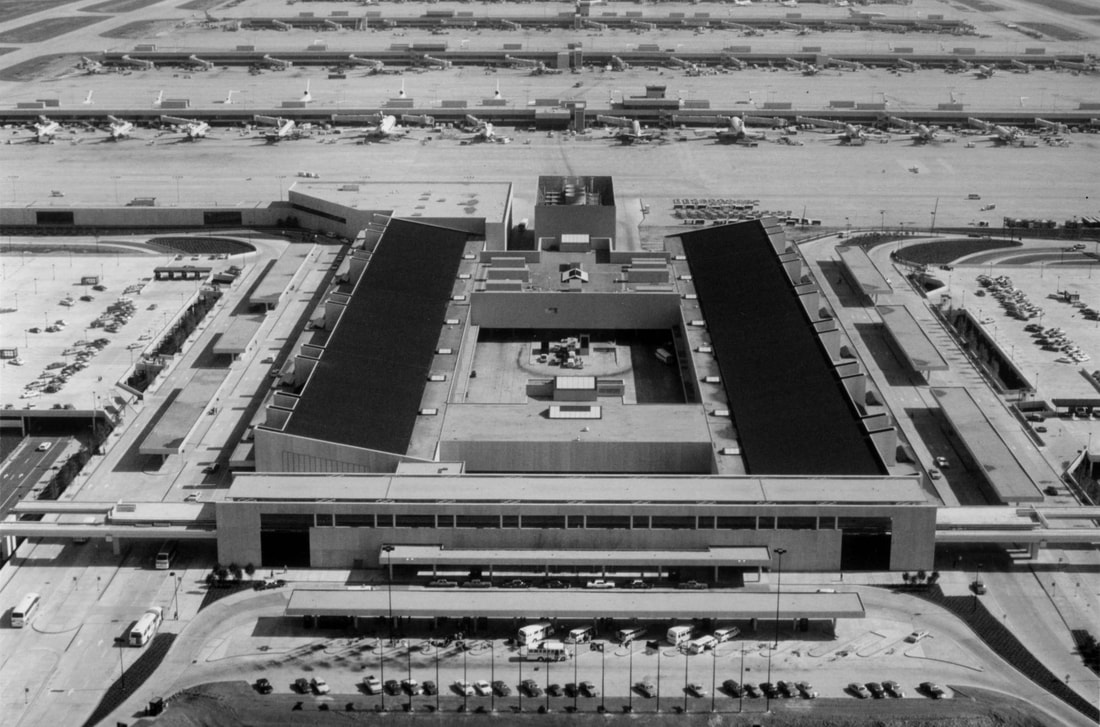 Eastern Air Lines' ticket counter in the north terminal circa 1980.

A color view of the Eastern ticket counter. 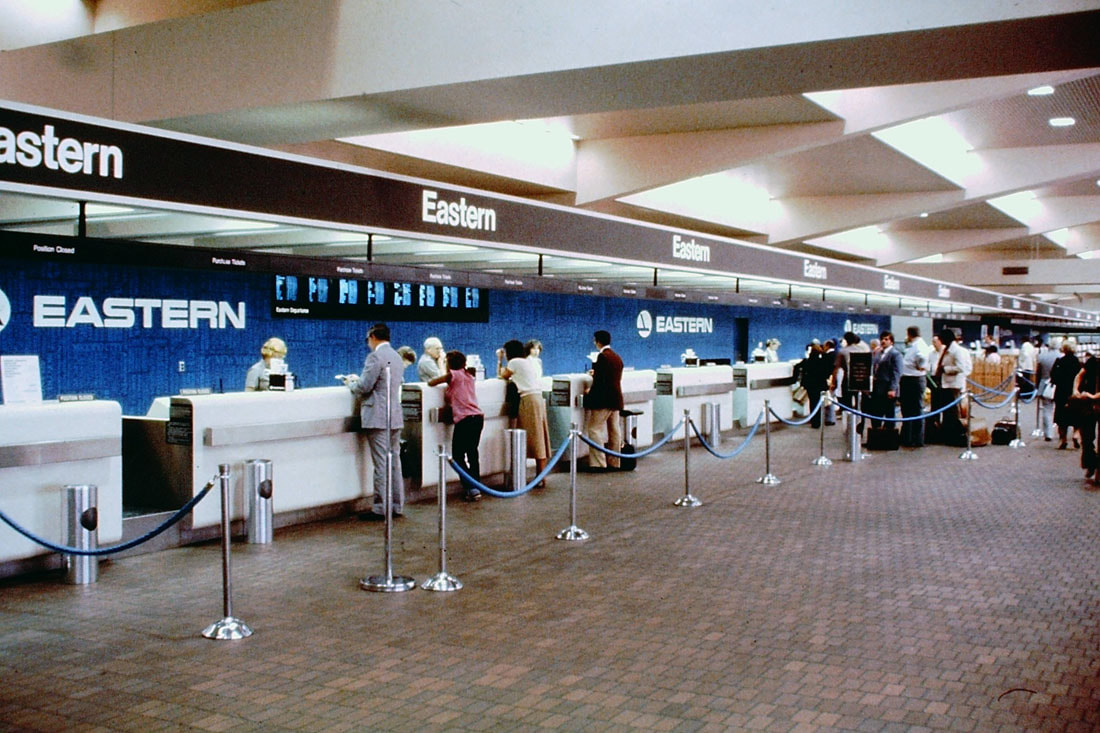 The center section of the Eastern counter with the corridor to security and the escalators to the underground transit at left. The international airline counters are at far right. 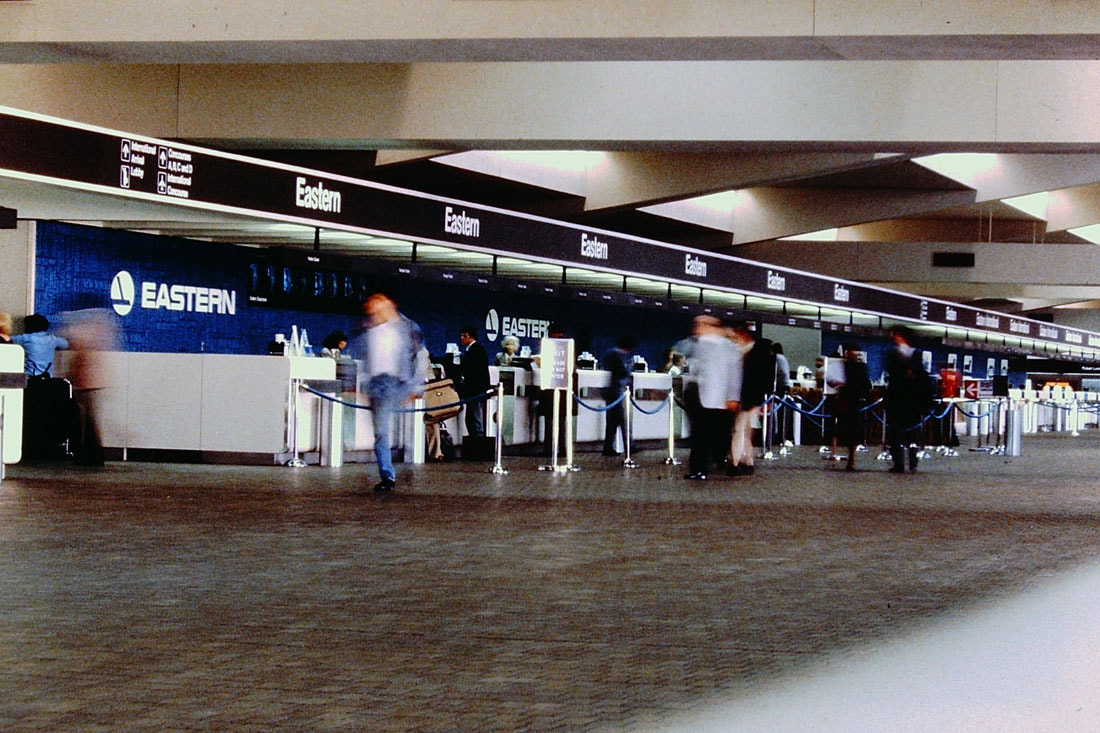 International carriers ticket counters in the north terminal circa 1980. 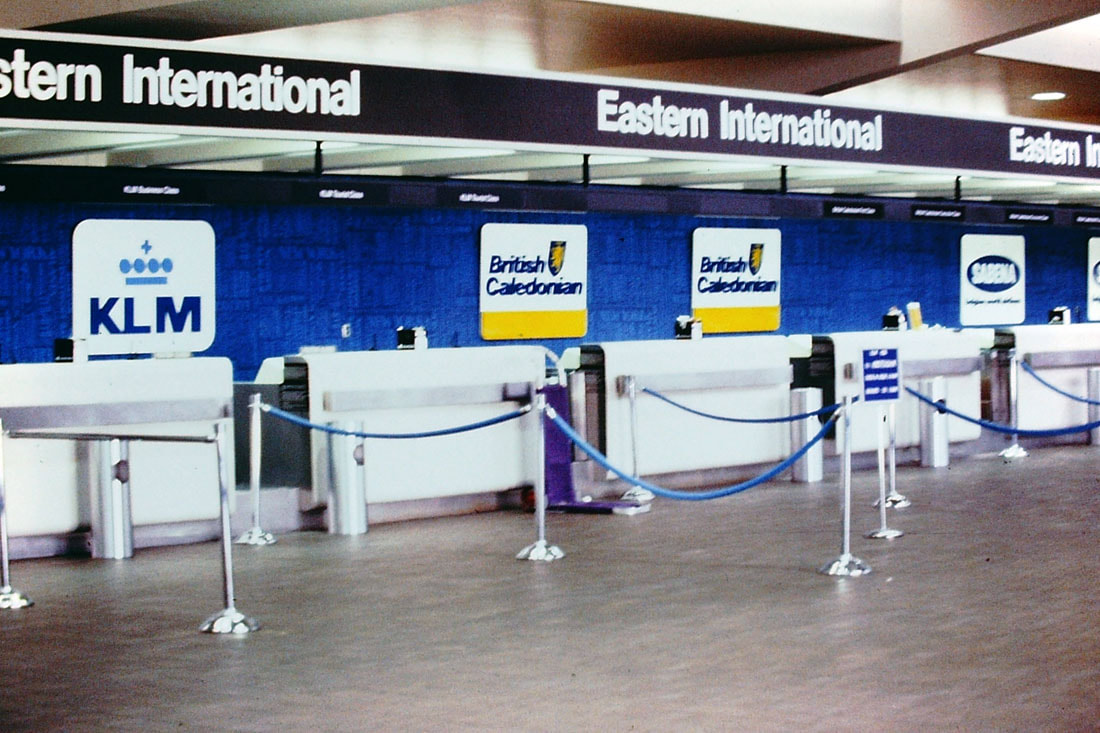 This is the north terminal baggage claim. The new complex was unusual in that the ticketing and baggage claim were on the same level. 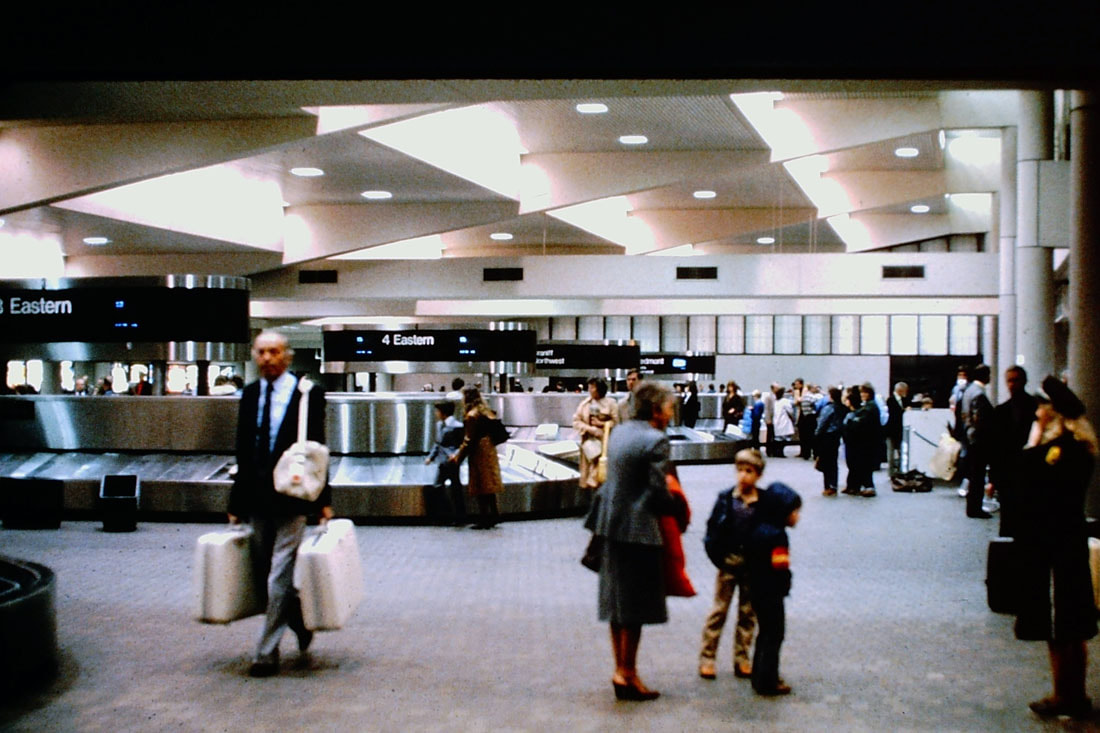 A circa 1980 view of the underground pedestrian mall connecting the landside terminals to the airside concourses. The underground transit system (the Plane Train as it is now known) runs on each side of this corridor. 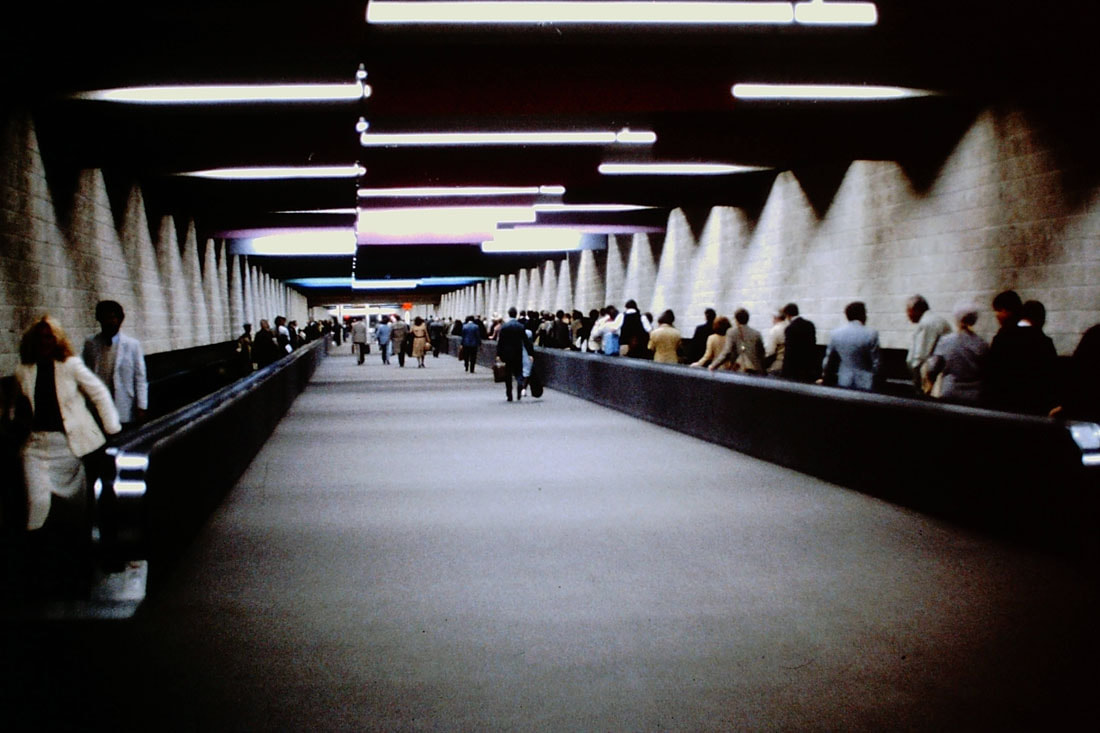 Eastern aircraft lined up along concourse C circa 1980-1981. 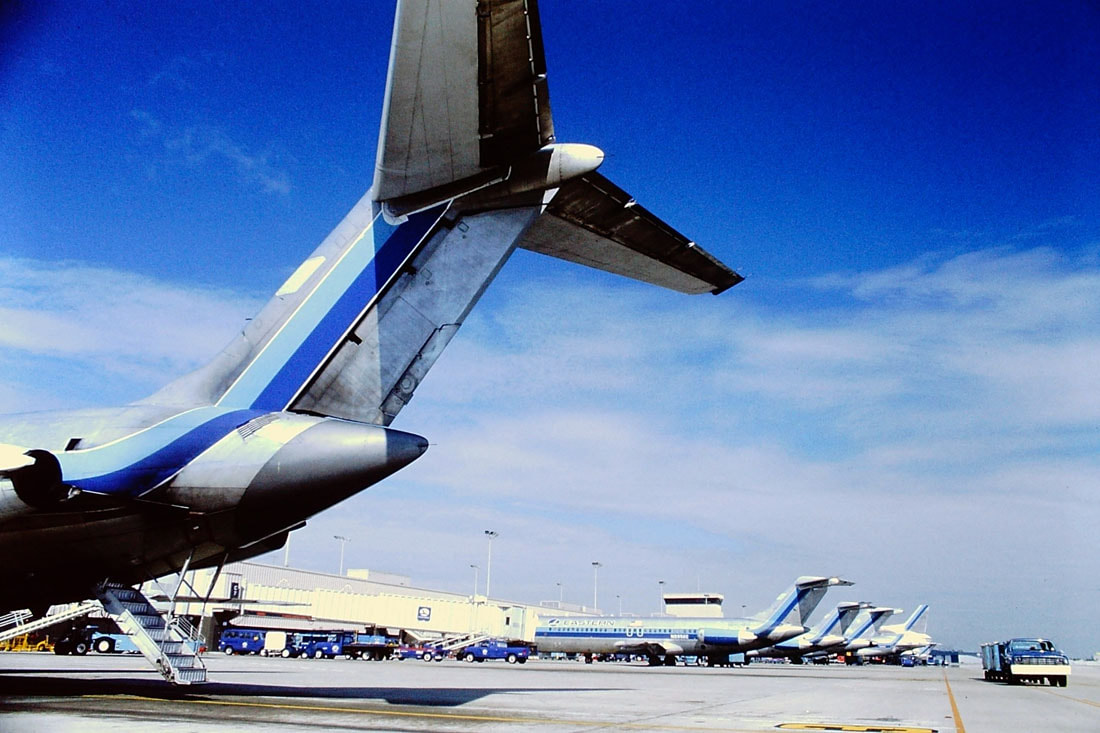 A view of Eastern DC-9s, 727s and an L-1011 parked at concourse C on July 7, 1981. This and the following black and white photos are from the Eastern Air Lines Digital Collection. 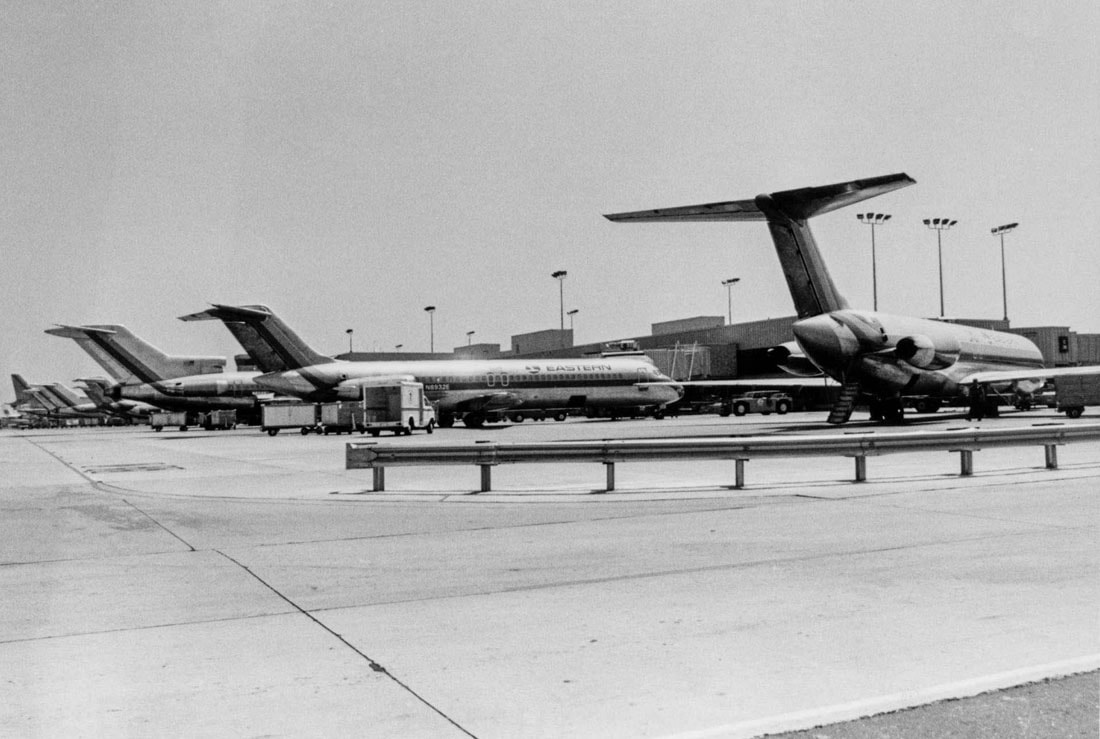 This series of views of Eastern's concourse C were taken on July 7, 1981 and are from the Eastern Air Lines Digital Collection. This is facing northeast and the entire 1961 terminal complex can be seen in the background to the right. 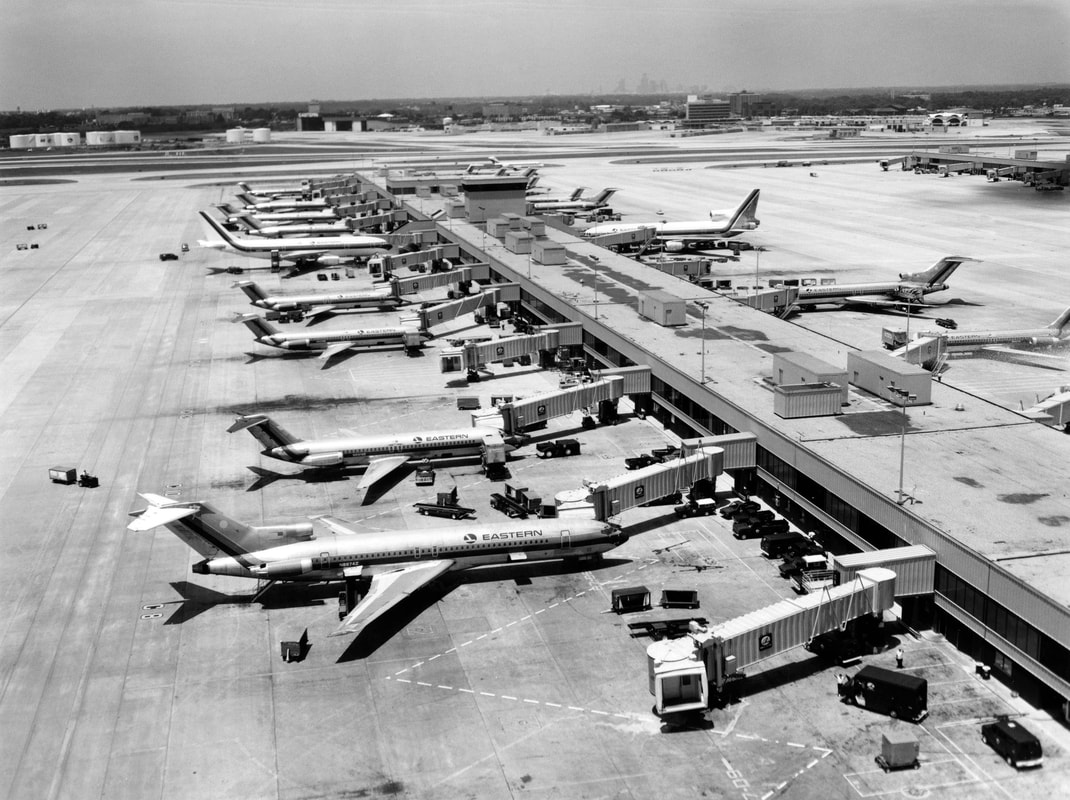 A similar view of the entirety of concourse C with concourse D seen at far right. The ground level commuter airline gate was located at the south end of the concourse and a Southeastern Commuter Airlines Riley Dove can be seen at bottom right. The jetways on either side of the commuter gate were used by Lockheed Air Terminal and handled charter flights from various companies. 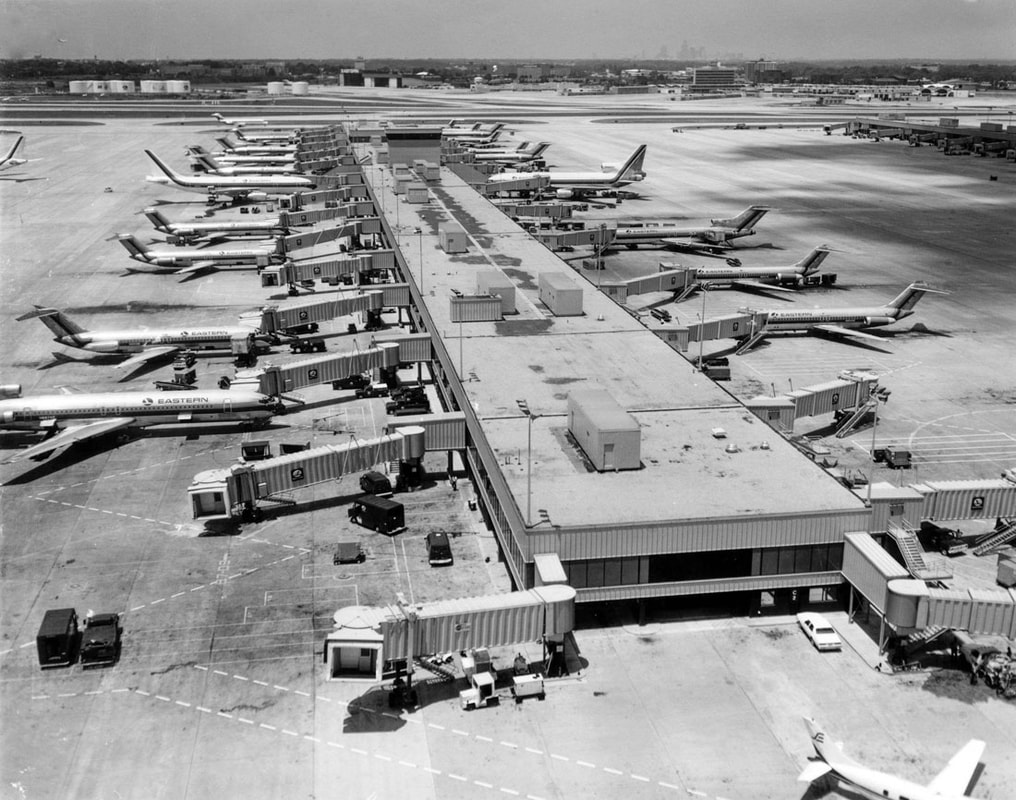 Another wonderful view of concourse C, facing northwest. Concourse B and the northern tip of concourse A can be seen to the left and the Hangar One complex, including the relocated 1948 "temporary terminal", is at top center just above the taxiing British Caledonian DC-10. Two Southeastern Commuter Airlines Doves can be seen at bottom left. Notice on the far end of concourse B , near the top center of the photo, Eastern built a large corrugated metal shed to handle ground equipment. 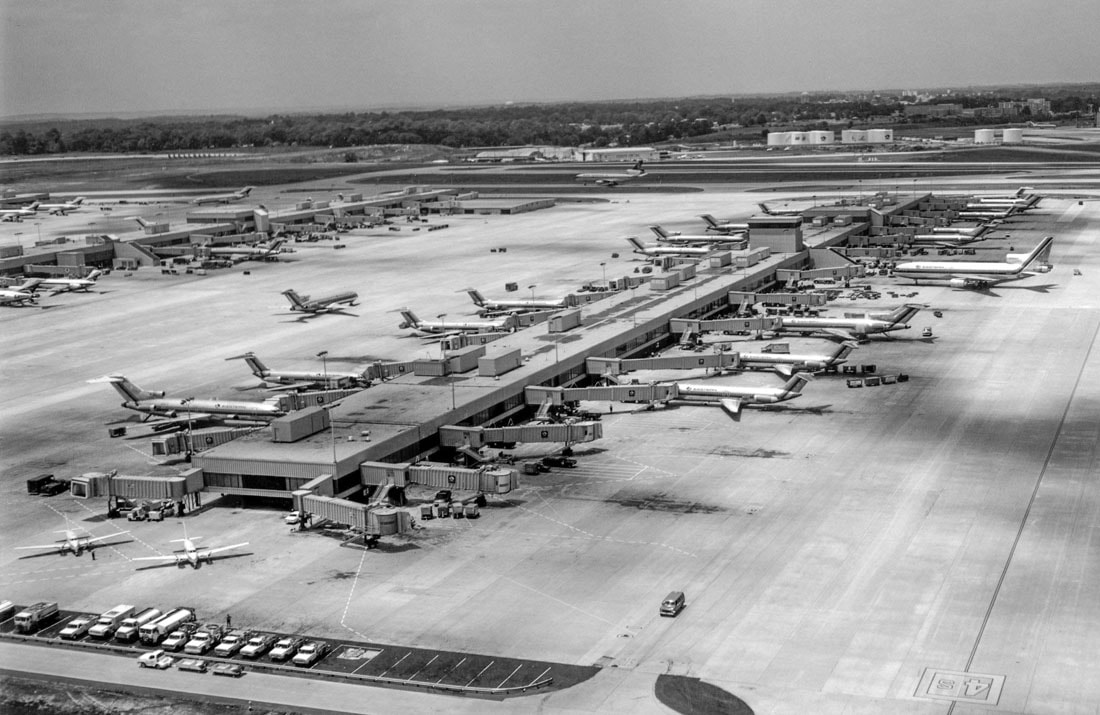 Concourse C, facing southwest. From this perspective, concourses B and A are off to the right. 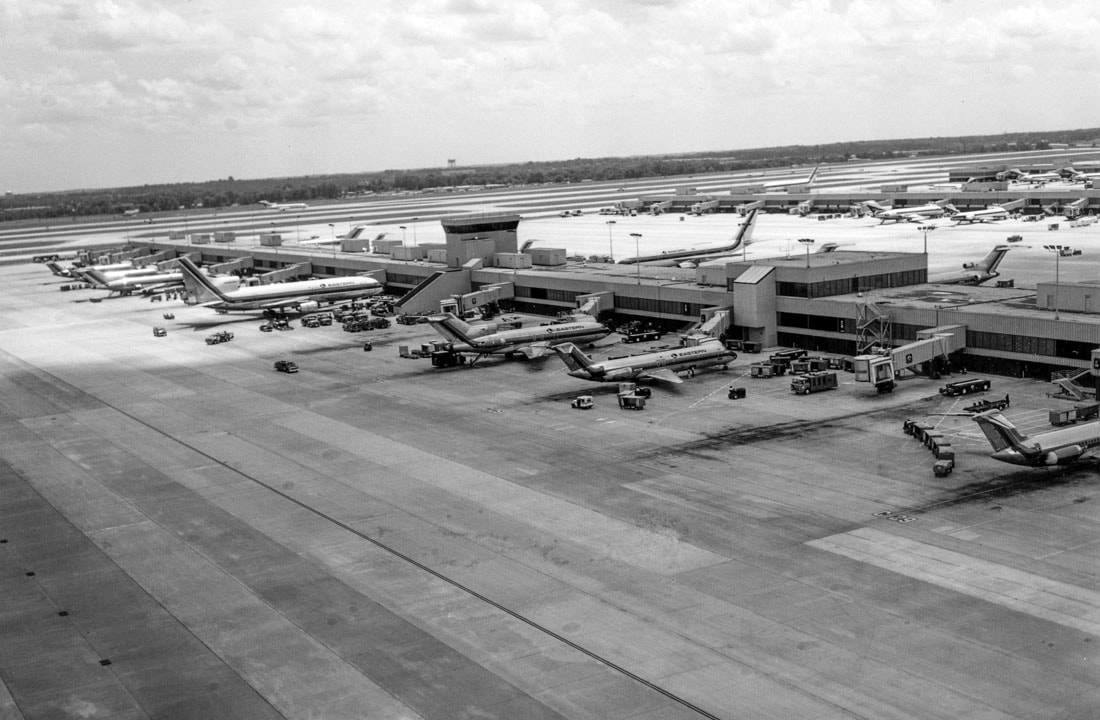 The final view of concourse C on July 7, 1981 is facing southeast. Republic's maintenance and reservations center can be seen at the top of the photo. Concourse D is at left, occupied by a sole Frontier Airlines 737. 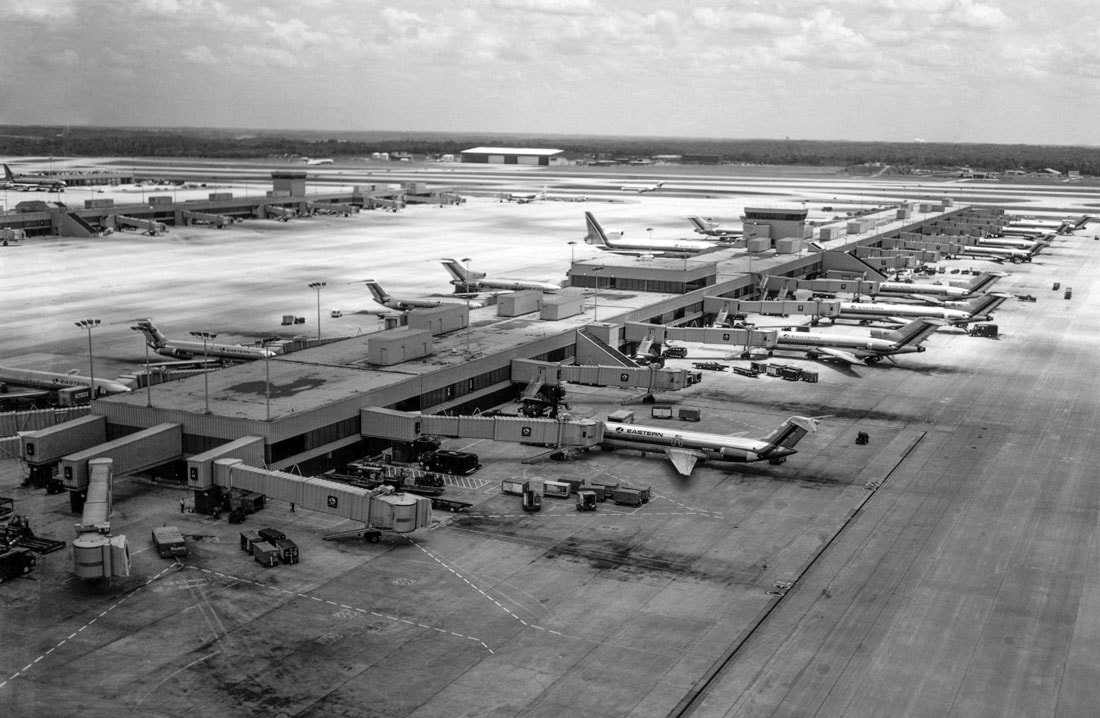 An infrared aerial photo from March 26, 1981 shows the airport 6 months after the midfield terminal opened. The abandoned 1961 terminal is at top center. 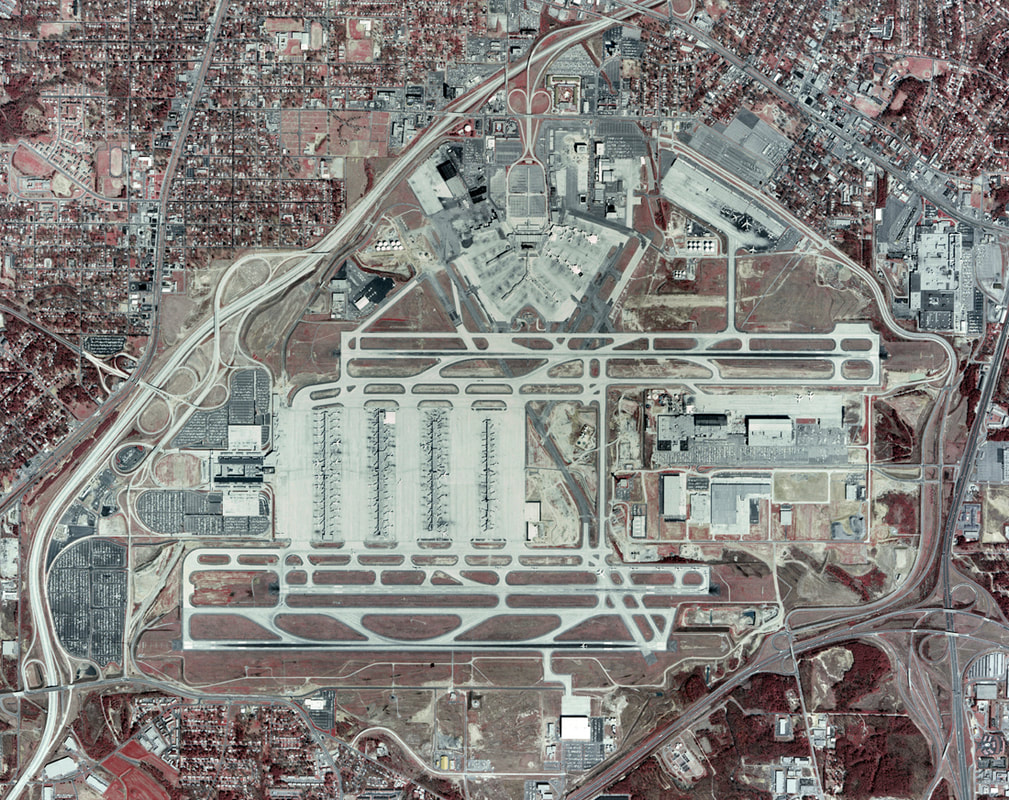 A close up of the terminal shows bustling activity at Delta's concourse A but the other concourses were relatively quiet. 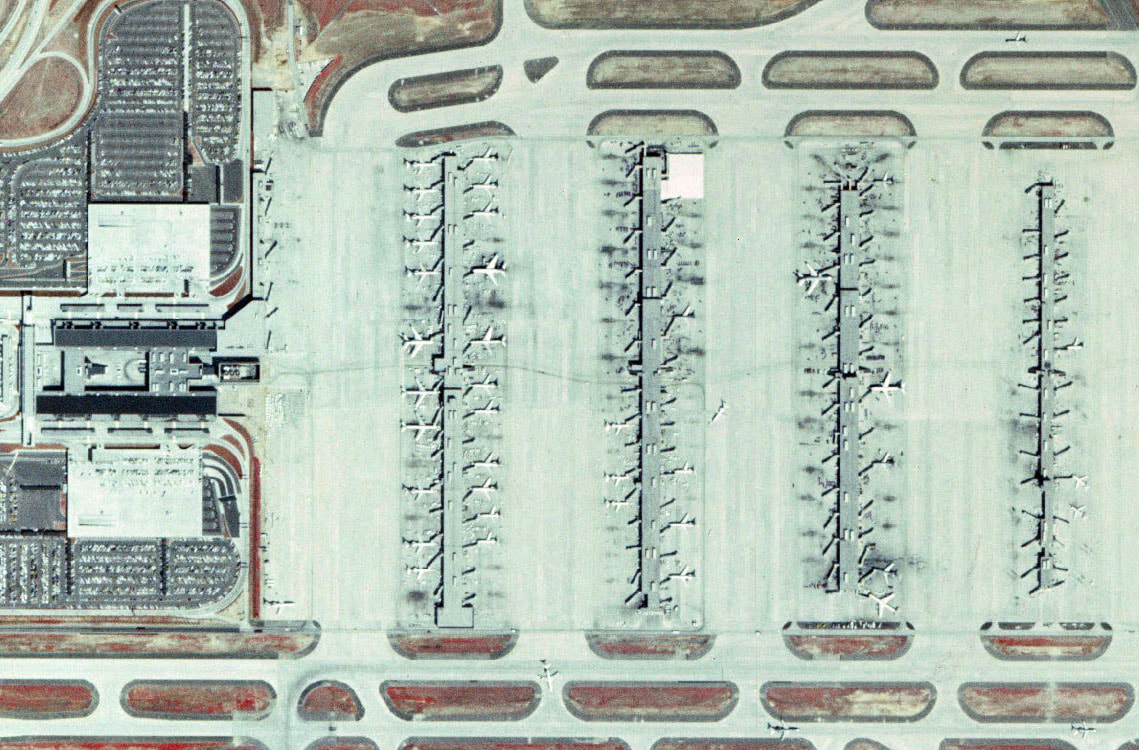 I picked up this map of Atlanta International from the Republic Airlines counter at ATL in early 1981. 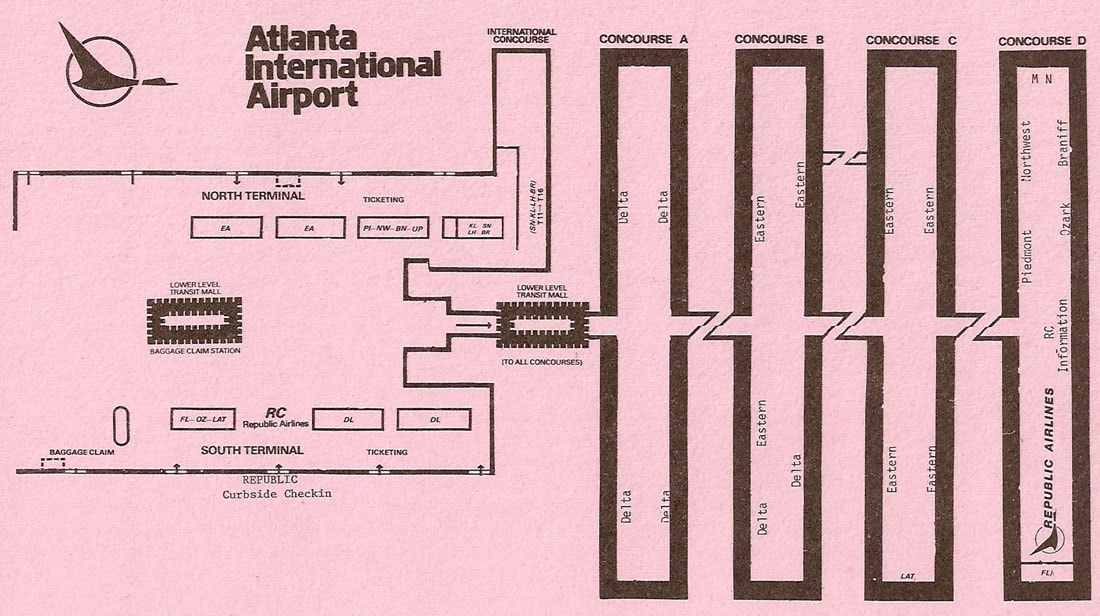 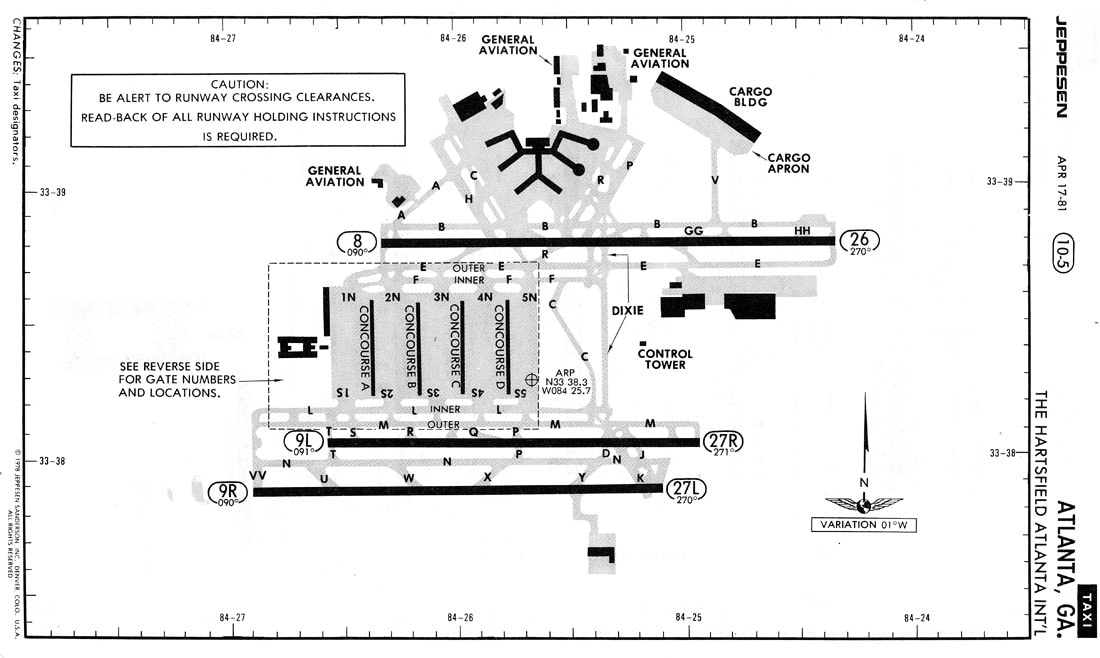 The other side of the page shows the gate positions and numbers. 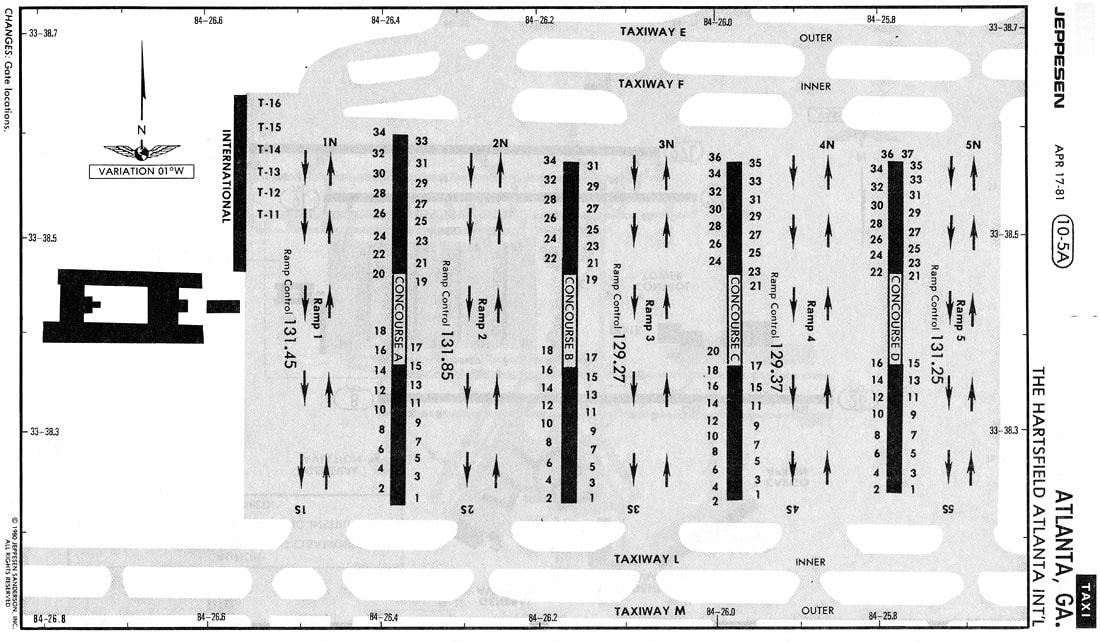 NEXT : POSTCARD VIEWS OF ATL FROM THE EARLY 1980s