ATLANTA AIRPORT: IN THE BEGINNING...

Indians, Armies & The Automobile
It is fairly common knowledge among history buffs and aviation aficionados that Hartsfield–Jackson Atlanta International Airport was built upon the site of an old racetrack. Indeed, The Atlanta Speedway was located off of Virginia Avenue and opened in 1909, and the early airport structures were built inside the oval.

​The unexpected question I have received repeatedly is, "What was there BEFORE the racetrack?"
So, here we go, from the very beginning...

​Atlanta Airport is located on what was once Creek Indian territory. This detail from the map "Georgia, from the latest authorities", drawn in 1796, shows a relatively accurate depiction of the rivers and streams across Georgia and present-day Alabama. The airport sits near the headwaters of the Flint River, making the approximate location easy to find on early maps.
The Civil War era "Map V illustrating the military operations of the Atlanta Campaign" shows the site of the airport crisscrossed by lines of Confederate works (in red) and routes taken by Union troops (dotted blue lines) during the final year of the war in 1864. I georeferenced the map to create this then-and-now comparison with the current airport layout and you can scroll between the two images. So many great details here. Names of selected property owners are shown as well as principal local landmarks. Some highlights: a wagon shop once stood in the area between today's concourses D and E; runway 9R/27L runs over the site of Hettis Mill, which was situated along Crooked Creek, now known as the Flint River; a cotton gin was located to the southeast of the mill.

Importing the georeferenced map into Google Earth as an overlay and selecting the 3D buildings option creates this startling combination of Civil War military operations with modern Hartsfield-Jackson airport. In this view, the line of Confederate works (shown in red) runs beneath the south end of concourse D, through the center of concourse C, up through the tank farm on the northwest corner of the airport, and then off through the city of East Point. The dotted-blue march line of the Union army nearly mirrors the route of today's underground Plane Train. The blacksmith wagon shop appears as a big black dot between the south ends of concourses D and E. You can also see the approximate natural course of the Flint River near the top right and one of its tributaries crossing the image just beyond the concourses. Scroll left-right to compare.
A small note at the bottom of the full map describes the area as heavily timbered with cleared ground around the farm houses.

While it may be difficult to imagine the site of Hartsfield -Jackson as heavily timbered wilderness, one small patch of land adjacent to the airport gives a glimpse of how the majority of the area must have appeared in the mid 19th century. Located between Interstate I-285 and the landing lights of runway 28, this short stretch of the Flint River seems far removed from the frantic pace of the world's busiest airport just a few hundred yards away. Photo courtesy of Finding The Flint. 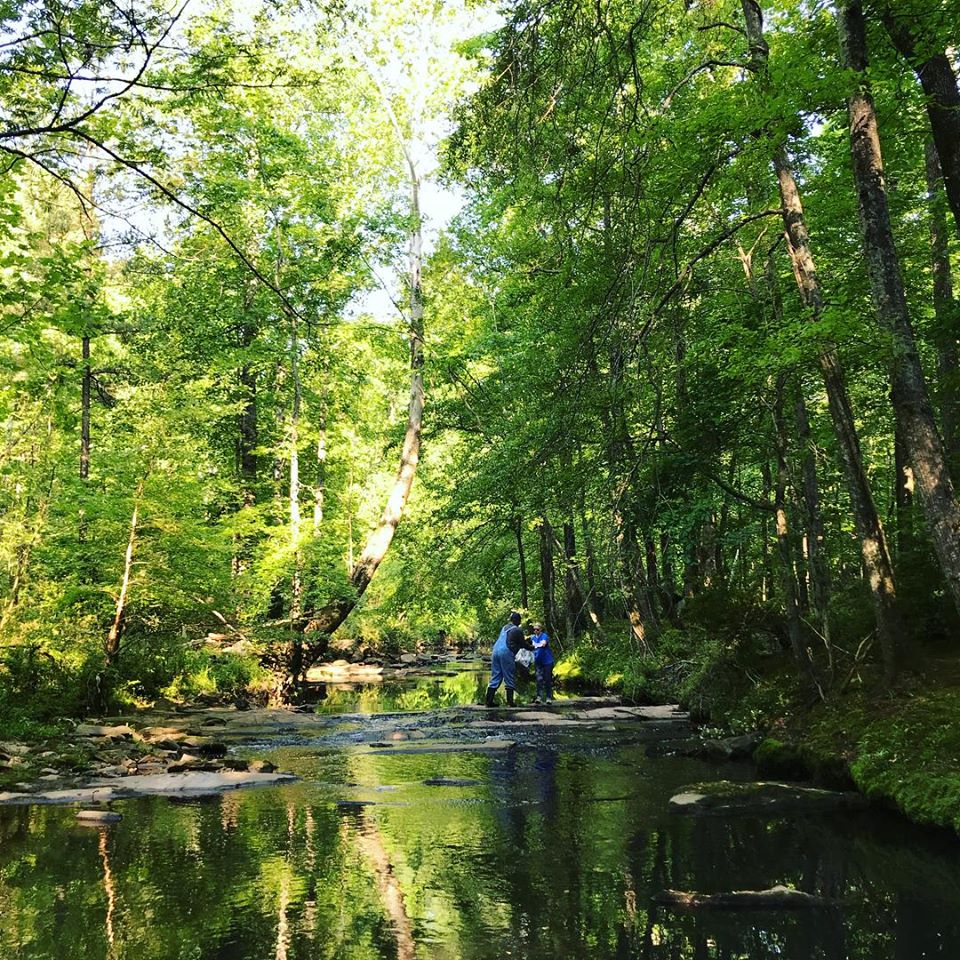 Hard to believe this photo was taken between the runways of Hartsfield-Jackson! Courtesy of Finding The Flint. 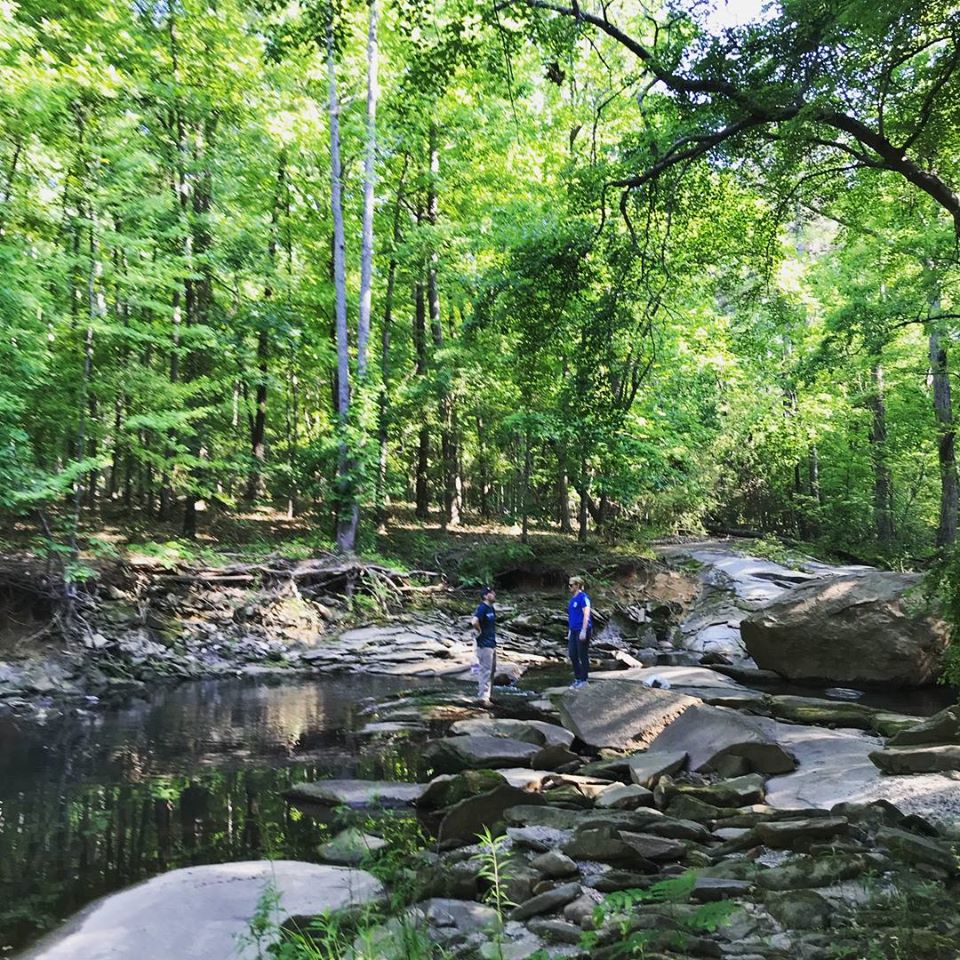 Here's another Civil War era depiction of the airport area, taken from the Map Illustrating the Fourth Epoch of the Atlanta Campaign. It's a bit easier to read than the previous map and some of the labels are different. These maps were hand drawn, so the locations of various landmarks are slightly different in each. Once again, you can scroll left-right to compare with the current airport layout.
One last Civil War map as it relates to the airport. This is a detail from a map titled Line of March of the Left Wing 16th Army Corps showing the movement of Unions troops from May 5th through September 8, 1864. Following the surrender of Atlanta on September 2, the Left Wing of the 16th Army Corps headed north from Jonesborough back into the city. On September 7, they set up camp on the Smith farm, which, as seen on the previous maps, was located just south of today's runway 9R-27L, south of the main terminals. Next time you're waiting for a flight at ATL or taxiing out to the runway, look across the field and try to imagine the Union Army with their horses and tents camping along the runway! 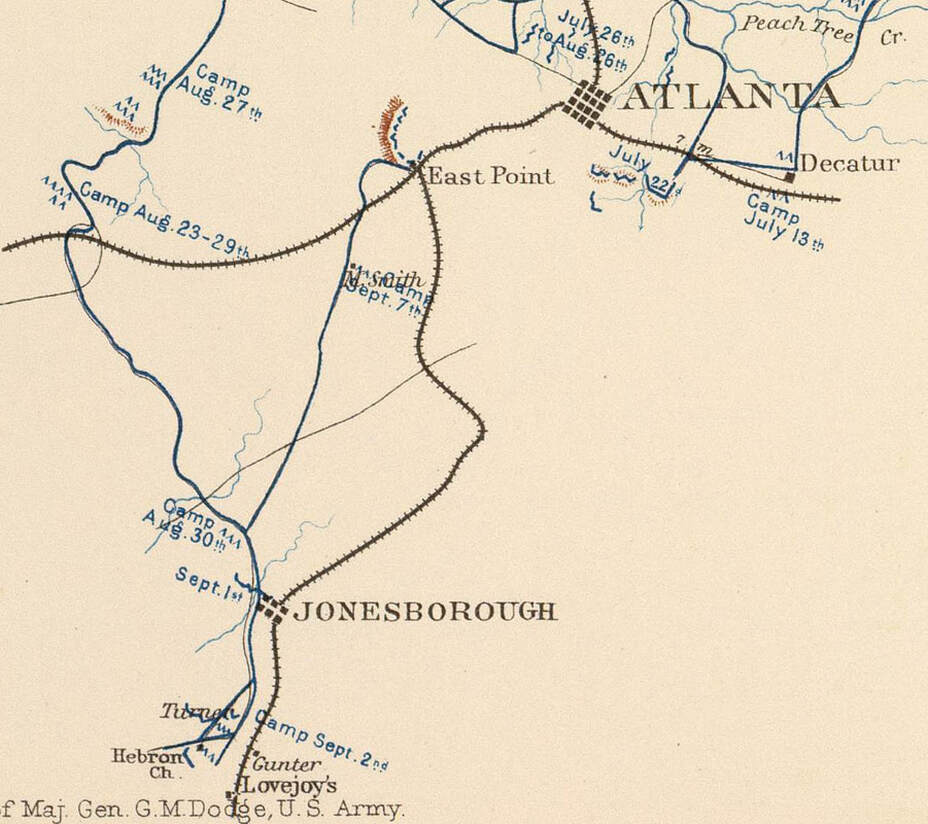 The site of the Smith farm and the Union Army campsite today. 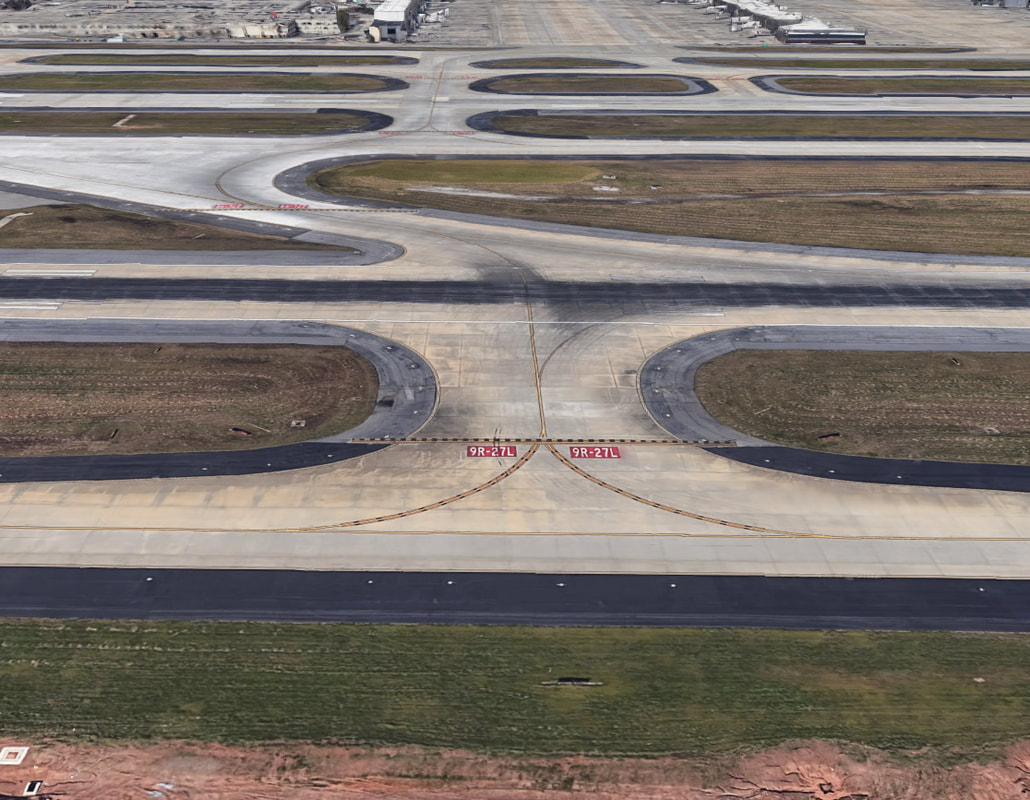 This map illustrates why the airport is located where it is today. During 1887 and 1888, the area was surveyed and mapped by the United States Geological Survey and the resulting topographic map shows the nearly flat countryside between Hapeville and Manchester (now College Park) crossed by meandering rural roads and tributaries of the Flint River. It is one of the few large flat expanses in the otherwise hilly Atlanta area and is precisely why it was chosen as the site for both the Atlanta Speedway and the airport. You can scroll back and forth to compare the 19th and 21st century views.
In early 1909, racing aficionado Asa Candler, Jr., son of Coca-Cola founder and future Atlanta mayor Asa Griggs Candler, envisioned building a world-class racetrack south of Atlanta along Virginia Avenue to compete with the recently announced raceway in Indianapolis. Candler and his business partner Ed Durant spent much of the spring quietly buying up properties in the area to create an assemblage for the site of their dream track. Their intentions were not publicly announced until all the land had been secured. This image comes from the incredible Asa's Briarcliff website courtesy of Sara Butler. It's an original blueprint showing parcels of land purchased from Hapeville residents, on file in the Candler papers at the Rose Library Rare Papers Archive at Emory University. 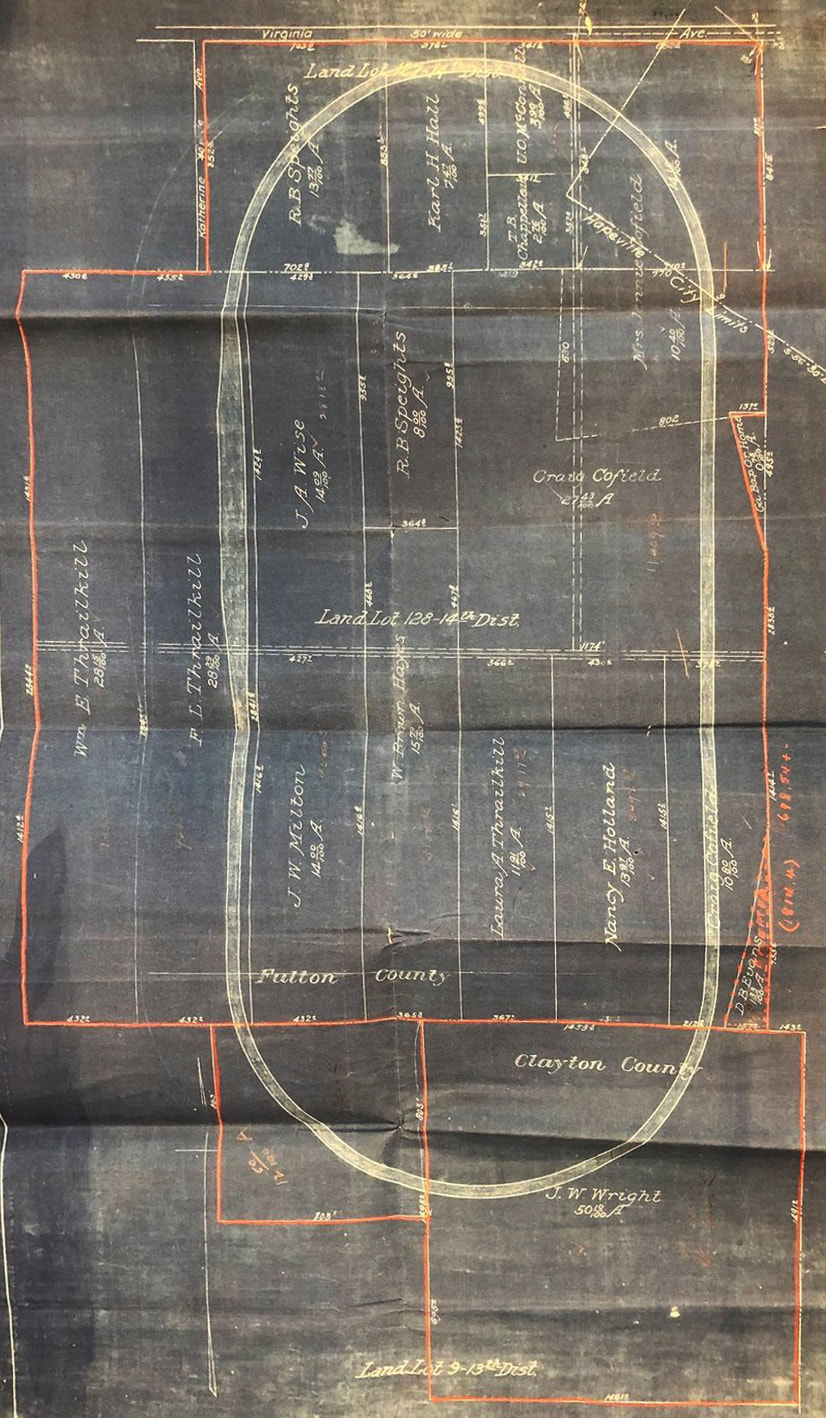 To get an idea of the locations of the various properties, the above photo was georeferenced and imported it into Google Earth. Google's 3D buildings sit on top of the overlay, creating a remarkable then-and-now comparison. This is facing northwest with I-85 running across the top of the image. The red "hotspots" provide additional reference when your hover over them.
This map appeared in the Atlanta Constitution on May 23, 1909, the day the track was publicly announced. 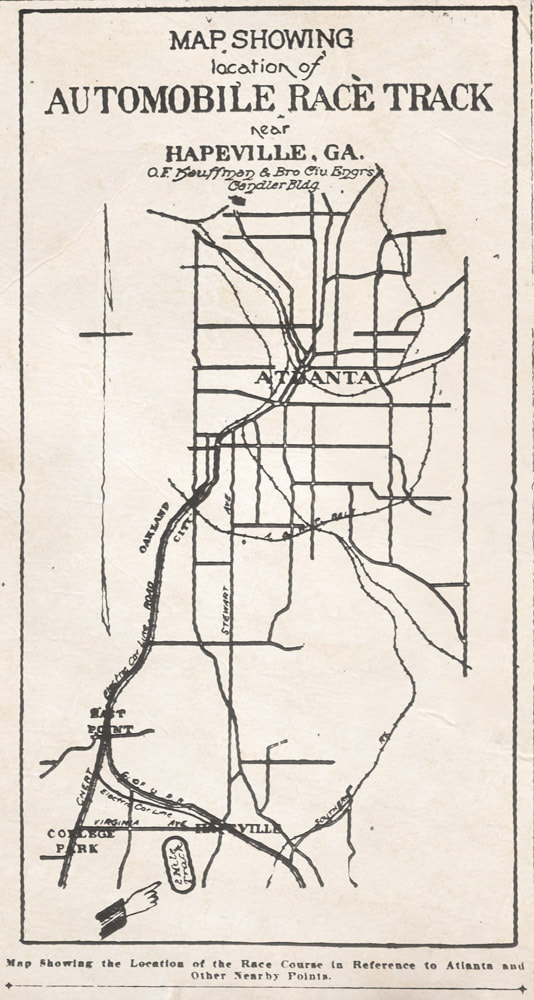 The next three photos of the track construction appeared in the July 8, 1909 issue of Motor Age Magazine and are the earliest photos I have found of the airport site. This first view shows construction of one of the banked turns and, judging from the farm houses, the topography and the dirt road, is facing east and shows Virginia Ave heading towards Hapeville. The low terrain between the work crew and the farm would be where the Flint River, no bigger than a creek at this spot, runs south of Virginia Ave. Delta's corporate campus now occupies the site. 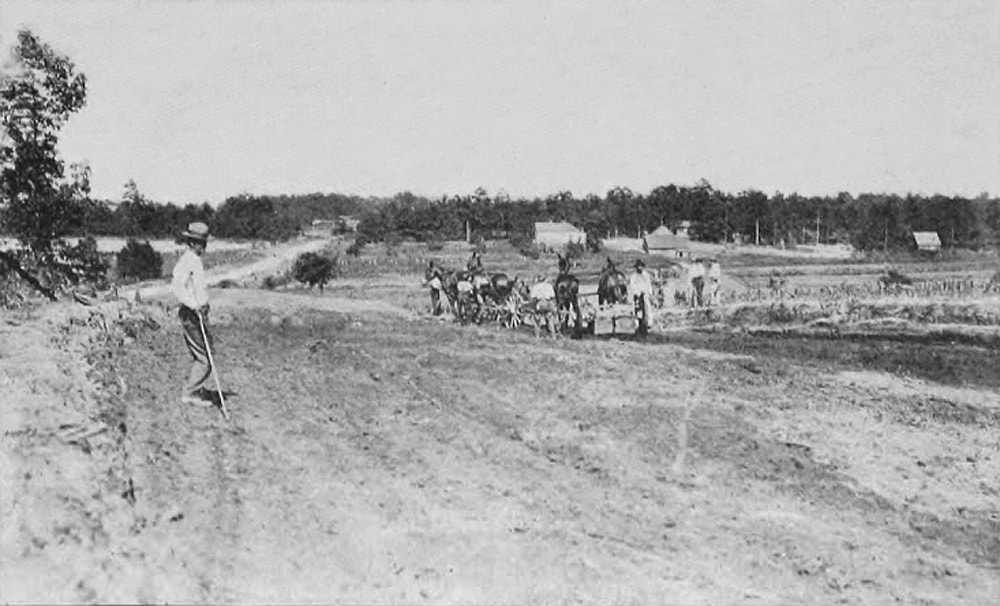 It only took 5 months to build the two mile raceway. The article in Motor Age claims that over 1,000 laborers (mostly unpaid prisoners) were involved and over 300,000 cubic yards of dirt were moved to create the 10-foot banked turns and level straightaways, which at some points were 15 feet above the surrounding land. This shows construction of the backstretch of the track. 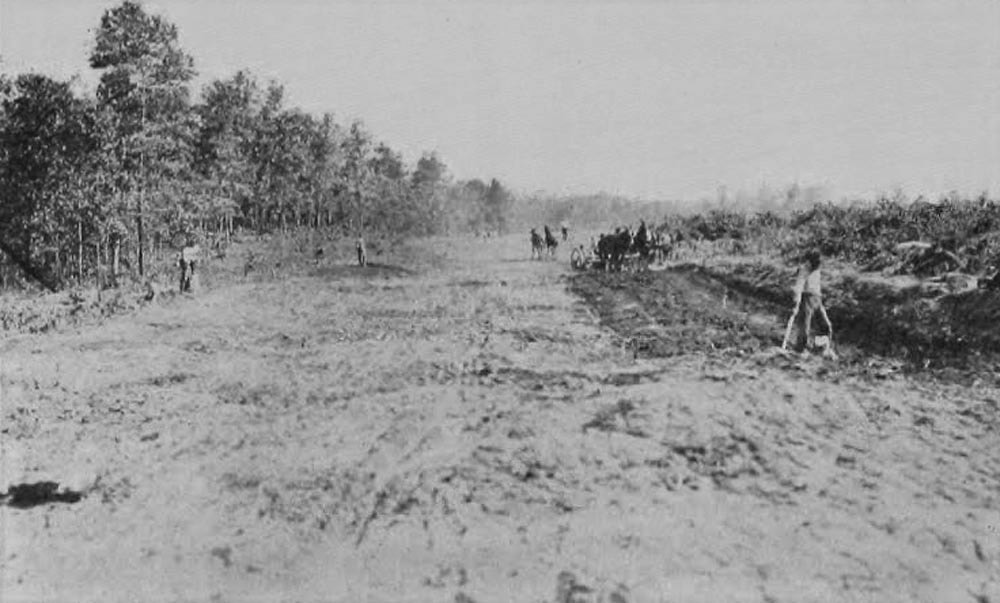 Asa Candler, Jr. (left) and Edward Durant organized and oversaw the construction with financing and oversight from Asa Candler, Sr. The Candlers formed the Atlanta Automobile Association in July 1909 as a way to avoid personal liability in the risky venture with Asa, Jr as President and Ed Durant as treasurer. 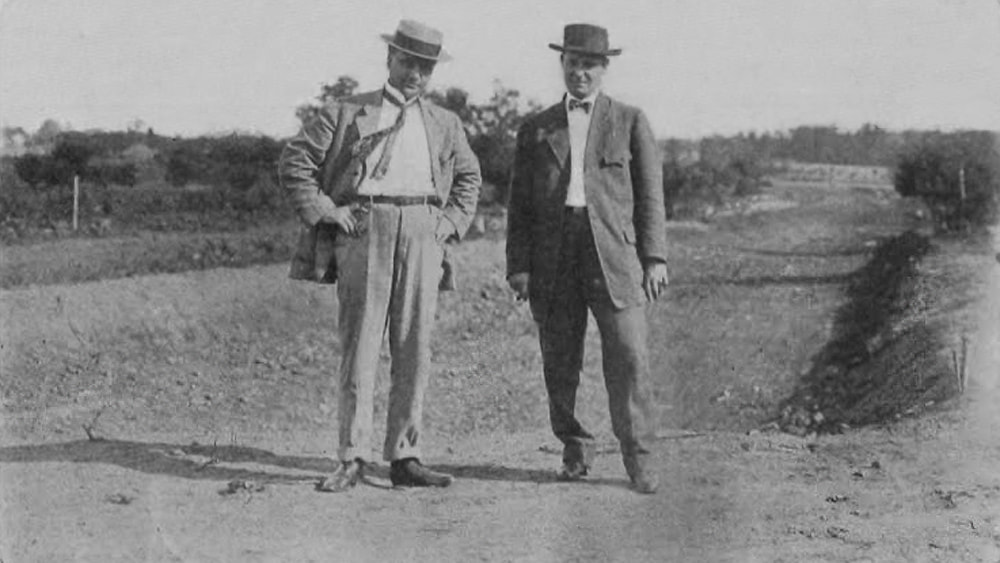 NEXT: THE RISE AND FALL OF THE ATLANTA SPEEDWAY