A view of the new terminal shortly before it opened in 1961, seen from the center concourse of the 1948 terminal. This gives a good idea of just how close the two buildings were. At this point, aircraft were still parking in front of the new building and the entrance ramp leads right out to the apron in this postcard view. 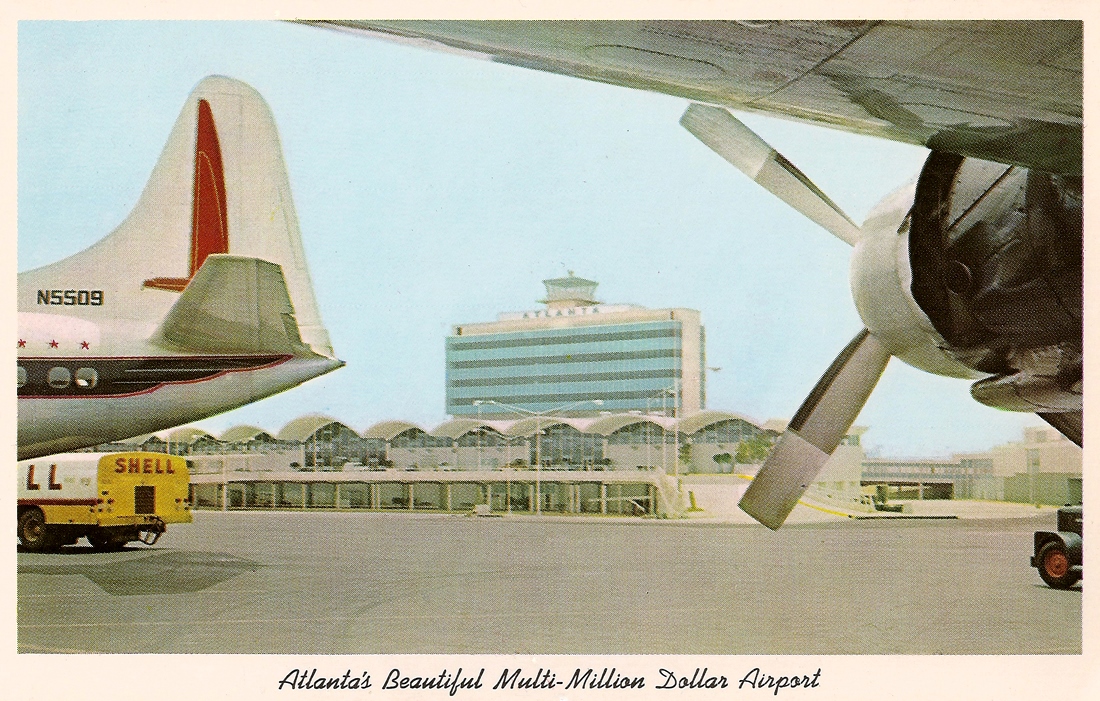 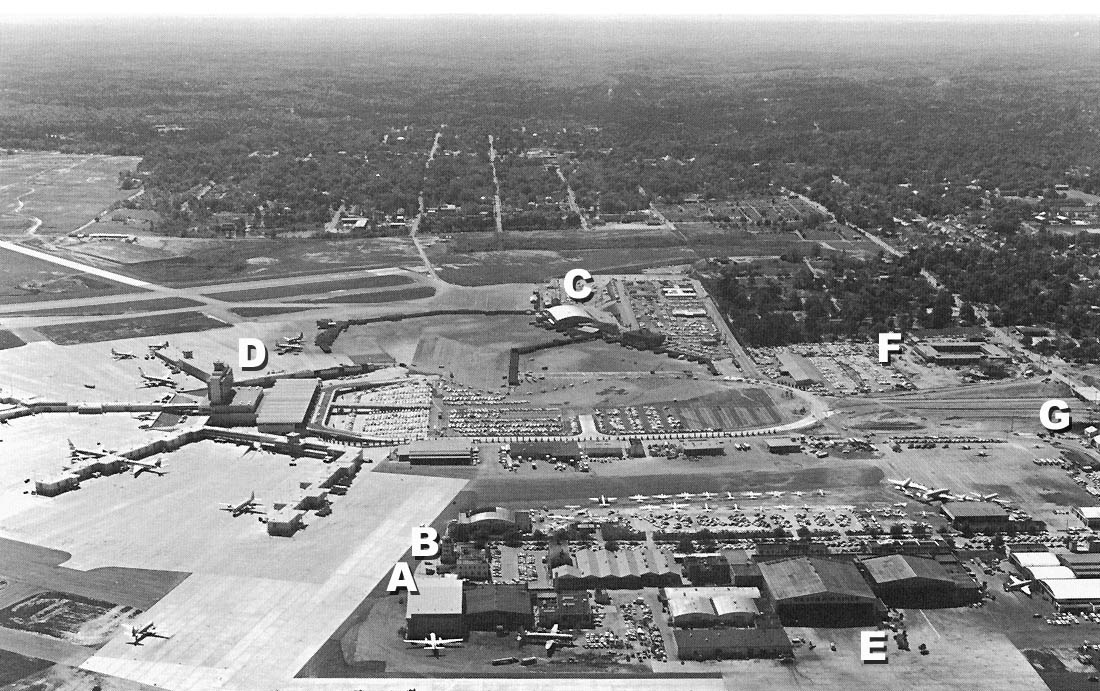 In this postcard view of the Atlanta Hilton Inn, the 1948 terminal has been cleared and construction of concourse A (to the right of the main terminal) is underway. The parking lot occupies much of what was aircraft parking at the previous terminal and the ultramodern Gulf gas station can be seen under construction to the right of the entrance road. At right, the road that connected the airport with I-85 is under construction as is the interchange with Virginia Avenue. Another view of the Hilton can be seen HERE. 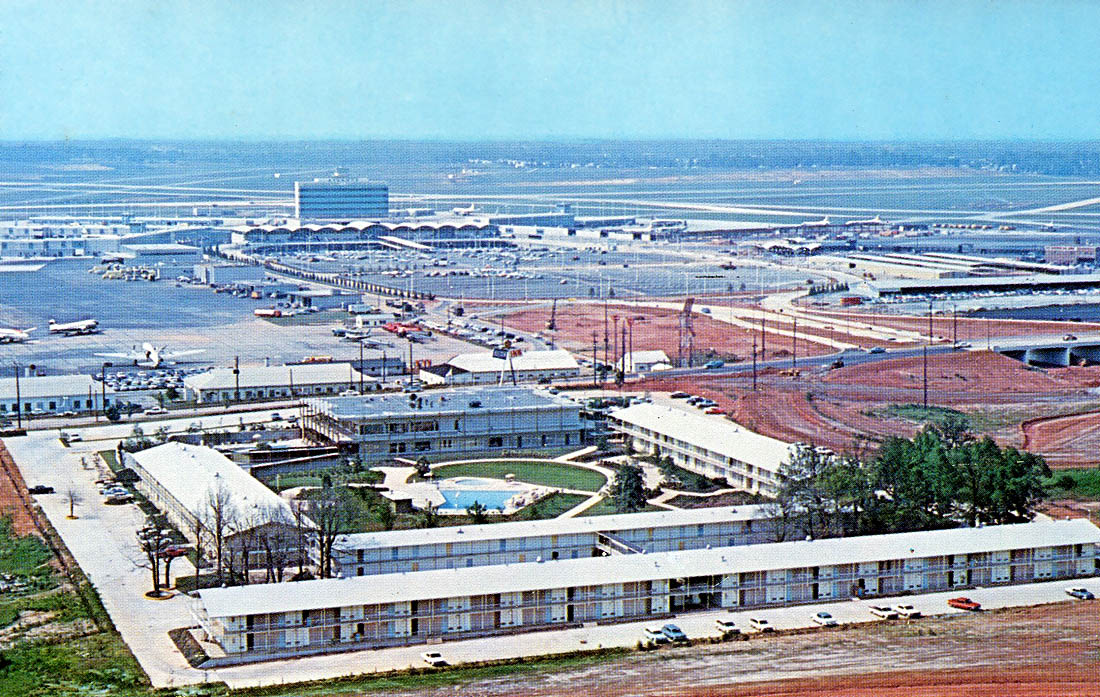 An aerial postcard view of Atlanta airport circa 1963-64. This faces north and interstate I-85 is under construction in the background. The concourses from left to right are: A - Eastern; B - Eastern; C - Piedmont, Eastern, Southern; D - TWA, Northwest, United; E - Delta; F - Delta.

At left is Eastern's new hangar which was built on the site of the old 1948 temporary terminal. Interestingly, the 1932 terminal and control tower were still standing and can be seen just beyond the end of concourse F. 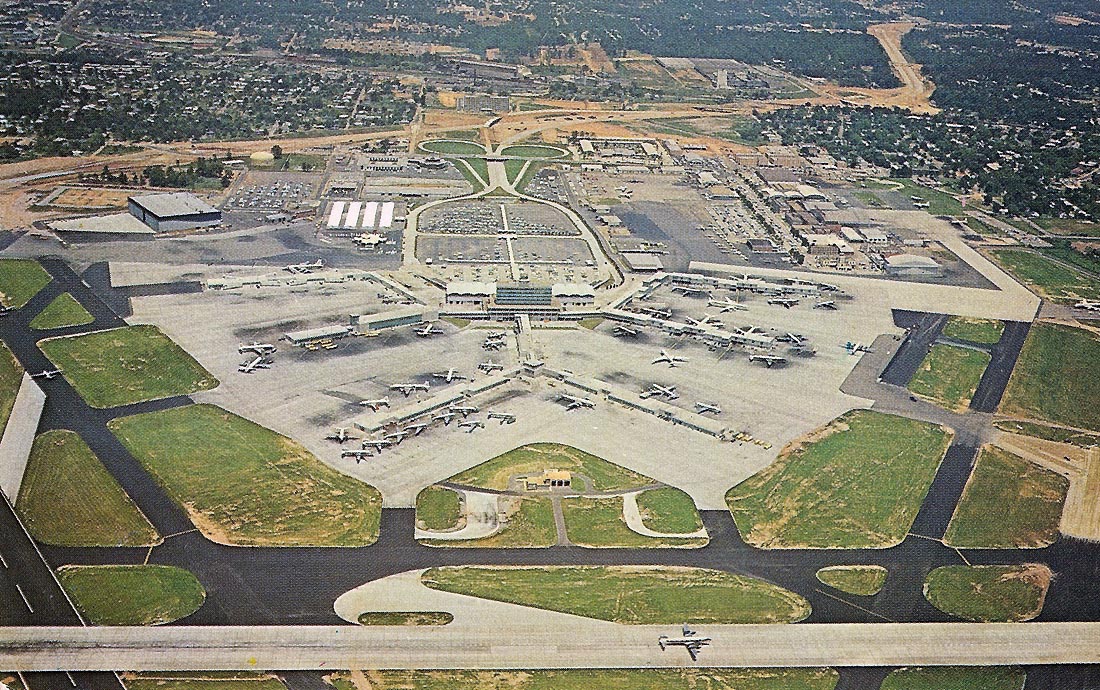 The following 3 photographs were all taken in nearly the same spot and give you a good idea of what the ticket lobby at the 1961 terminal looked like. The lobby was nearly 500 feet long with high barrel vaulted ceilings, golden terrazzo floors, and depending on the time of day, lots of natural light.

View from the middle of the ticketing lobby looking north toward the parking lots. The lobby had two long ticket counters with an area in between them that led to the aircraft gates. On the east side of the terminal, left to right, were the airline counters of Southern, United and Delta. On the other side were the counters of Eastern, Northwest and TWA. The parking lot seen here is now the location of the Renaissance Concourse Atlanta Airport Hotel. 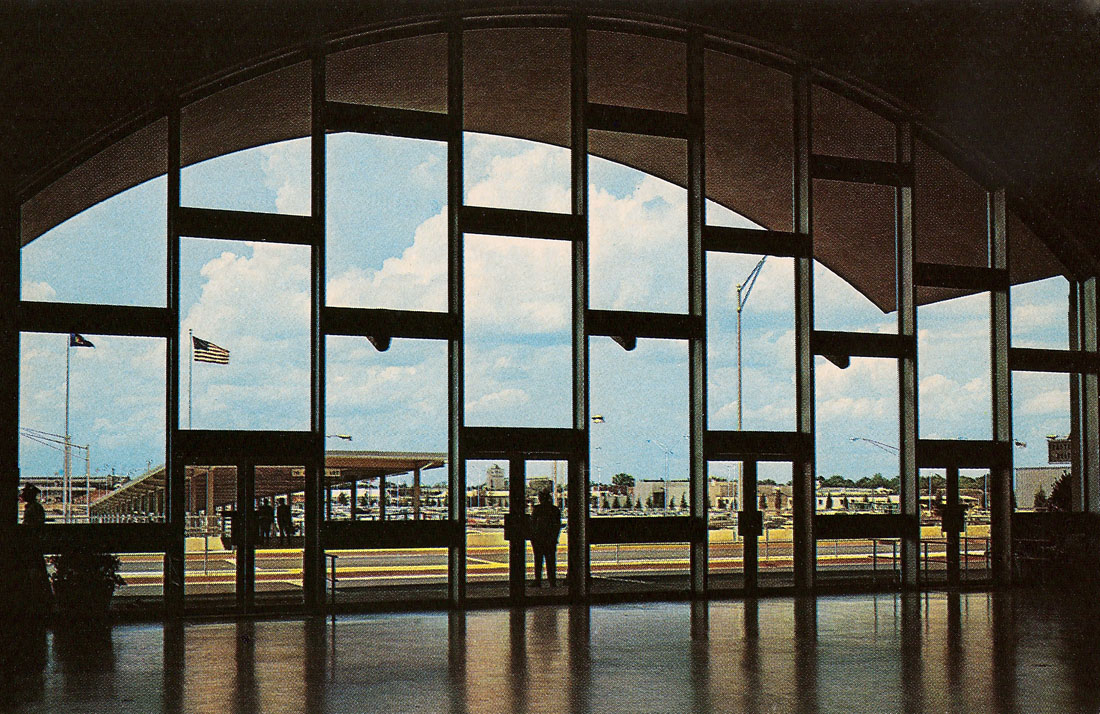 From the above view, if you were to look over your left shoulder this is what you would see. This photo from the late '70s was sent in by David Carter who has a nice collection of his dad's ATL photos in this youtube video. 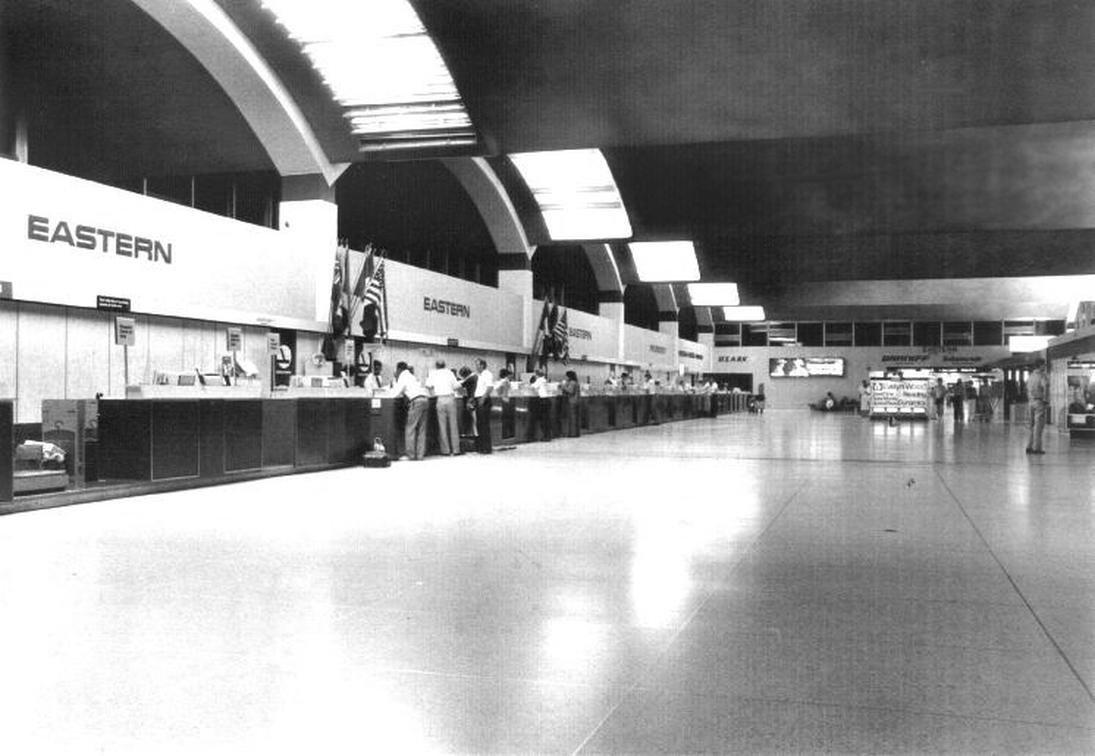 Turning left again, this was the view. This 1964 photo shows striking Eastern flight engineers picketing in front of the ticket counters. The turquoise administration building can be seen through the window at upper right. 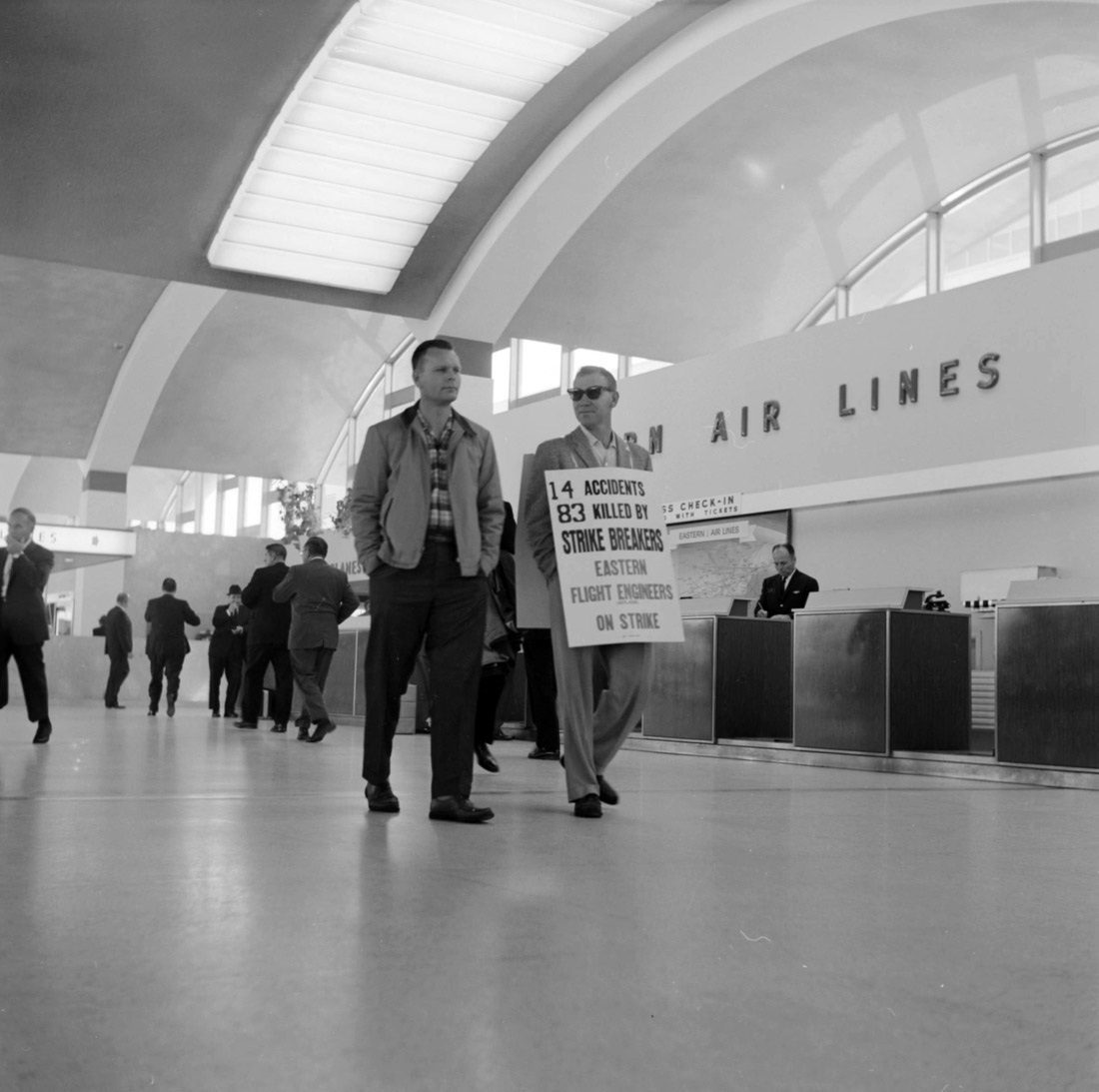 PHOENIX AND THE MEZZANINE

This abstract mobile depicts the symbol of Atlanta, the phoenix, the mythical bird that rose from its own ashes. It hung above the area that connected the ticket lobby with the boarding gates. Atlanta sculptor Julian Harris designed the $35,000 mobile. At the top of the escalator was the mezzanine level and the Skyport restaurant and lounge which offered a great view of the airport action.

The back of this postcard reads: "Mobile in the interior of Atlanta's new air transportation terminal.  Central theme is the Phoenix from the seal of the city of Atlanta.  Extending out on three beams are stylized birds representing flight."

Here are two more photos of the same area in the 1961 terminal, combined in photoshop to form a panoramic view.

A 1965 view of the same escalator seen above with the added bonus of an Oldsmobile Toronado! New cars were displayed here for most of the 19 year life of the terminal. In the distance is the corridor that led to the boarding gates. To the left were Delta's 2 concourses and slightly to the right were the "Y" shaped concourses C and D. A hard right turn would lead to Eastern's concourses A and B. Courtesy of the Lane Brothers Commercial Photographers Photographic Collection, Georgia State University Library.

The mezzanine level at the top of the escalator with the Skyport Cinema Lounge through the doors to the left.

AIRLINES AT ATLANTA IN THE EARLY 1960S

Atlanta's control tower is framed between the massive prop of an Eastern Lockheed Electra and the tail of a DC-7. A Piedmont FH-227 can be seen in the background. While Delta Air Lines had their concourses built with two levels in anticipation of an all-jet fleet, Eastern chose to have their gates built at ground level without jetways. The open door of gate 20 at the end of concourse B can be seen at far left.

This view from between concourses D and E shows one of United's sleek French-built Caravelles and a Delta DC-8 still wearing the 1950s color scheme.

Despite its enormous size, the 1961 terminal surpassed its design capacity in the first year of operation as the airlines experienced rapid growth. This postcard shows five Piedmont aircraft crammed around what were originally two gates. One of the great features of the 1961 terminal can be seen to the right - the rooftop observation deck that sat atop concourse C/D. (An amusing note: Looks like something took a bite out of the Martin 404 tail on the left! Must have been accidentally cut off when they added the bright blue sky. Oops.)

Atlanta-based Southern Airways showing off their first DC-3 to be painted in the new color scheme in 1962.

Two generations of Convair aircraft are shown here - a piston-engined Convair 440 at left and the tail of a Convair 880 in the foreground, both parked at concourse E. 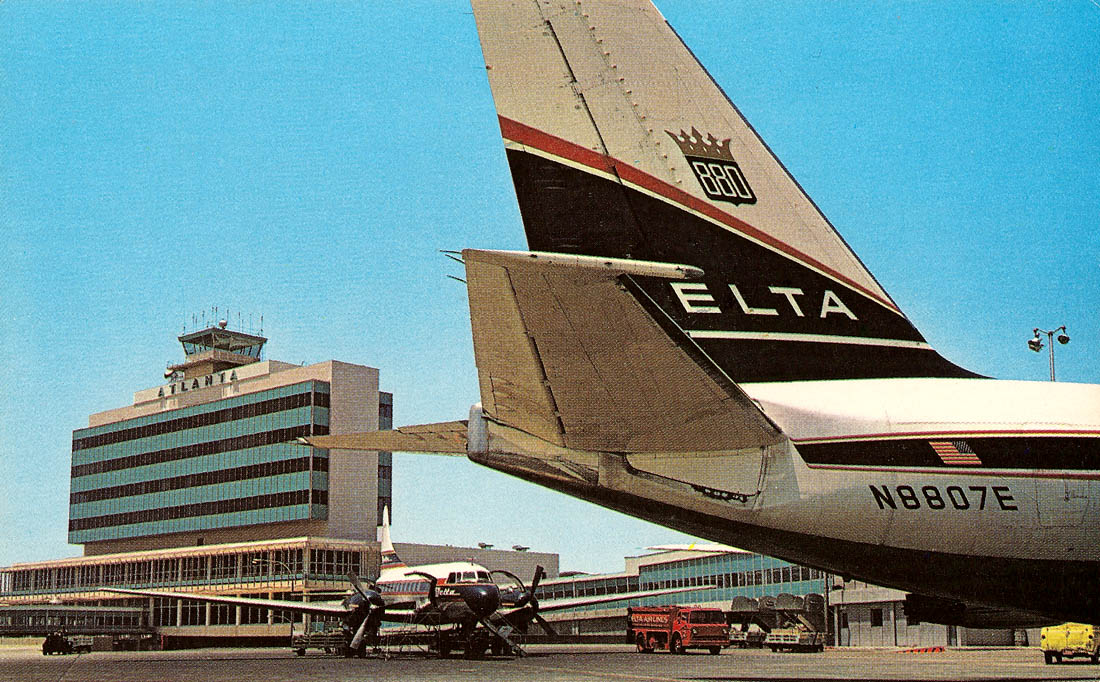 Here are a few more postcard views of the iconic turquoise-paneled control tower and administration building that topped Atlanta's airport terminal built in 1961.

This is the back of the building, as seen from the observation deck. The upper level of the terminal, just below the tower, housed the Skyport restaurant and lounge.

This was taken from behind the airport fire station and shows the area between the "Y" shaped concourses C and D in the foreground. 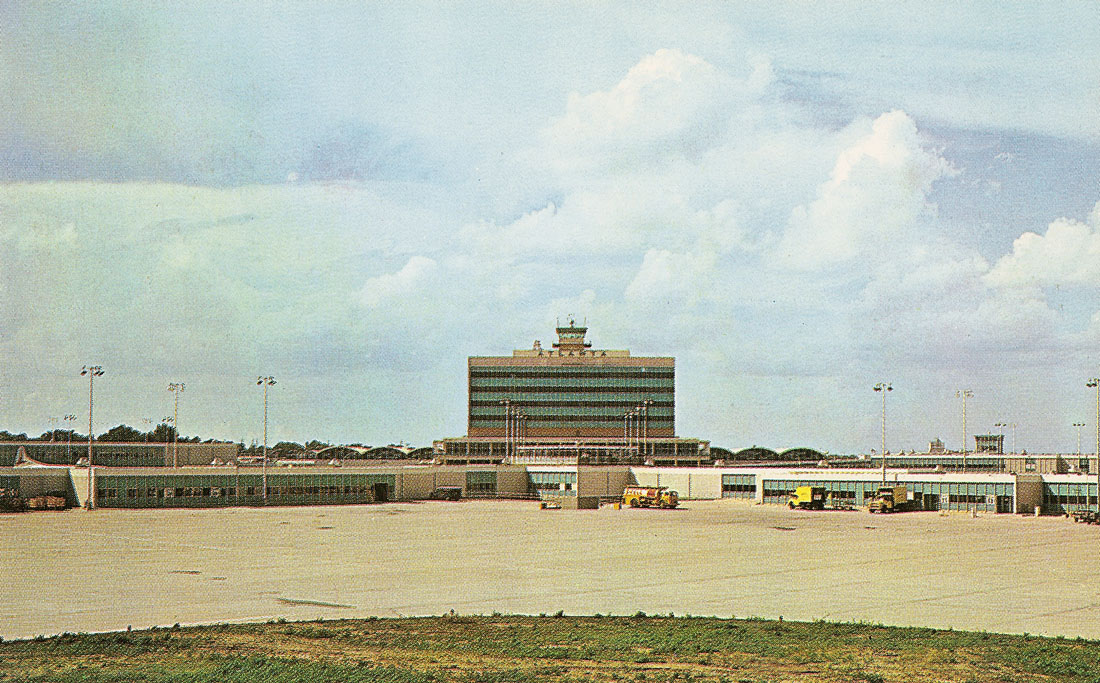 Another classic view of the airport from the entrance ramp.

...and the other end of the building showing the exit ramp.

NEXT: THE TEMPORARY TERMINAL MOVES TO HANGAR ONE