New York has the Statue of Liberty, Paris has the Eiffel Tower, Miami has white sandy beaches, but... Atlanta? What defines Atlanta and how have airlines promoted the city to the traveling public through the years? This fascinating collection of airline travel posters, spanning six decades, answers that question with images that are alternately obligatory, surprising, and occasionally cringe inducing.
Delta Air Lines, circa early 1950s. This first poster is an exercise in directness and simplicity: show a photo of the city and label it. This appears to be an early 1950s aerial view of Atlanta and the bold letters erase any doubt that this is in fact ATLANTA. Maybe Delta was trying to impress upon the world that this was no backwoods southern town, that it had become a thriving center of government and commerce with big buildings as far as the eye can see, the "New York of the South" as it was sometimes called. Impressive, yes, but not particularly exciting. 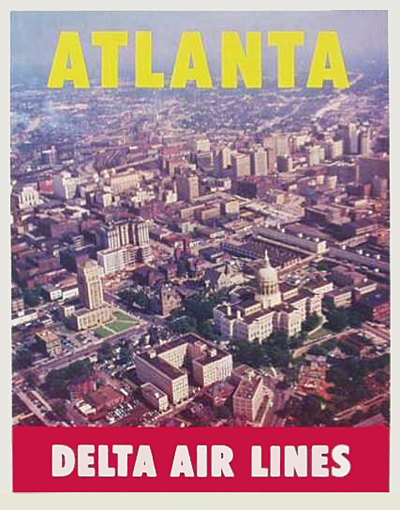 Delta Air Lines, circa 1957. A Delta DC-7 flies through a glowing pink background over a whimsical southern belle in this fantastic piece of fifties pop art. A branch from a peach tree cleverly transforms into her rosy cheek and eyebrow. Her flowing hair also doubles as an antebellum column. 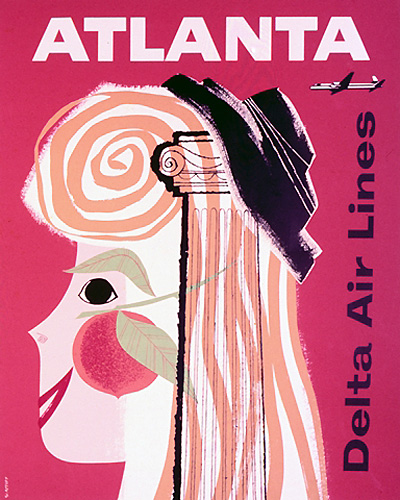 Eastern Air Lines, circa 1960. Eastern's otherworldly presentation of Atlanta is pure Hollywood-inspired fantasy, where everyone strolls the grounds of their antebellum mansions in formal attire beneath the moss covered trees, which by the way, don't actually exist in Atlanta. 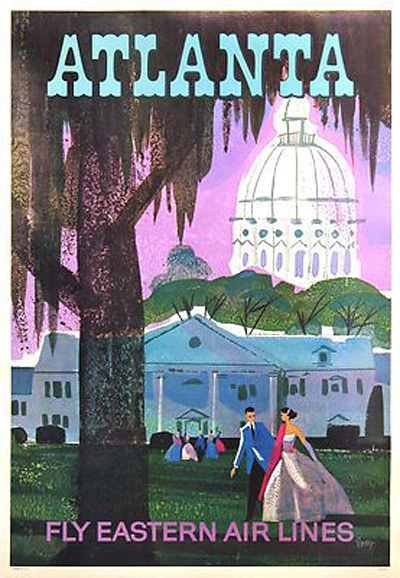 Delta Air Lines, early 1960s. Not be outdone by Eastern's romanticized old south imagery, Delta promoted Atlanta with this wonderfully stylized portrait of Scarlett O'Hara. A new Douglas DC-8 jet appears over her left shoulder as if to reaffirm that this was actually the nineteen sixties. 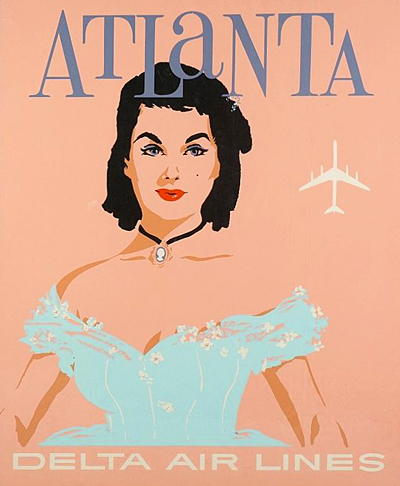 United Air Lines, late 1960s. By the late 1960s, airlines were relying less on Gone With The Wind clichés and focusing more on tourist attractions in their advertisements for Atlanta. This United Air Lines poster depicts the skylift at Stone Mountain park. 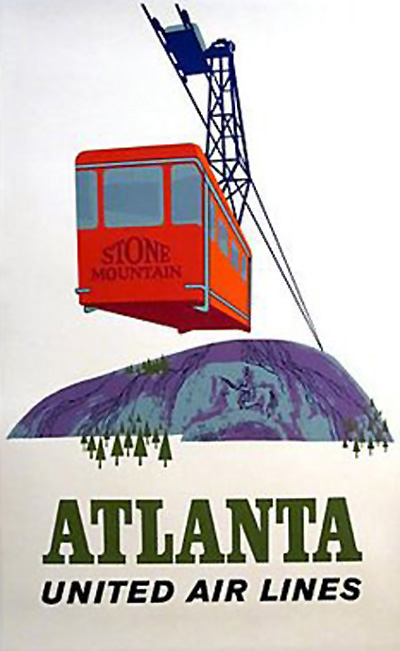 United Air Lines, 1969. The 1860s meet the 1960s in this inspired example of Confederate psychedelia promoting the Atlanta Cyclorama and its civil war locomotive "The Texas". 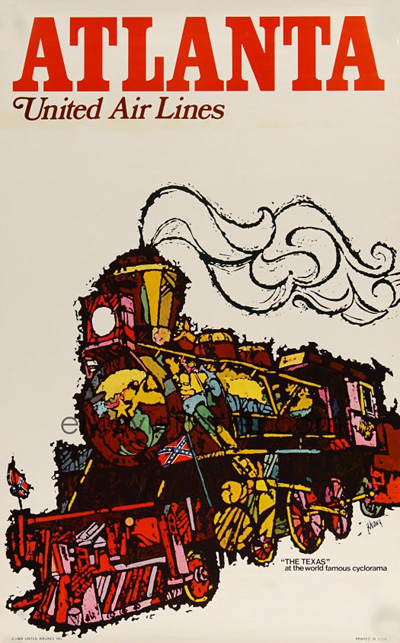 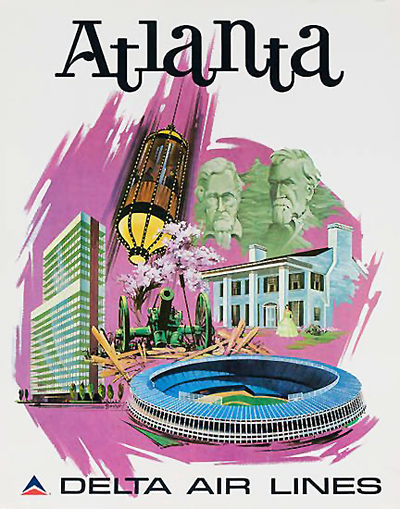 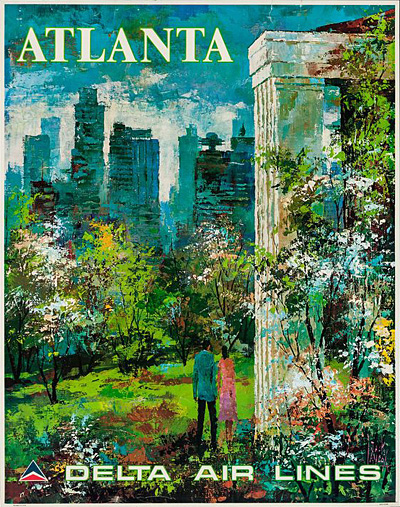 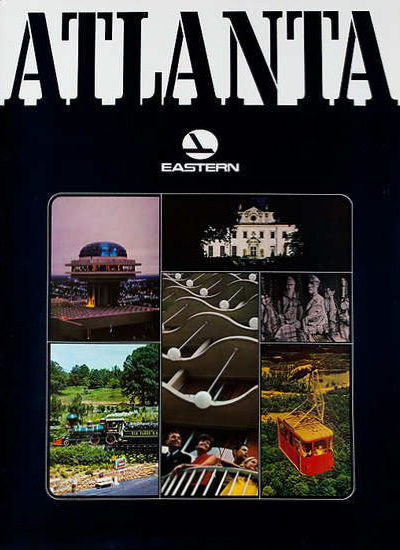 Southern Airways, circa 1978. This is a perfect design, portraying Atlanta as a fun modern city without all the Civil War baggage. A Southern DC-9 in its modern blue and white livery soars above Atlanta's Peachtree Plaza, which at the time was the tallest hotel in the world, the "blue spaceship" of the Hyatt Regency, the log ride at Six Flags Over Georgia, Underground Atlanta and dogwood blooms (of course). 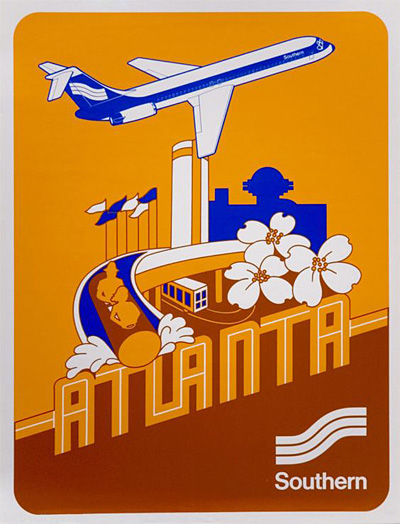 Eastern AIr Lines, circa 1981. Another collage showing popular Atlanta scenes: the blue dome of the Hyatt Regency, an old southern mansion, the state capitol, the skylift at Stone Mountain, the Six Flags log ride and the Atlanta skyline at sunset. 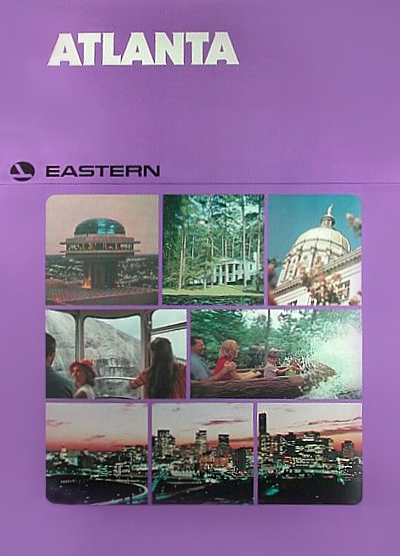 Delta Air Lines, circa 1985. A pleasant eighties pastel view of Atlanta where the old south meets the new south. 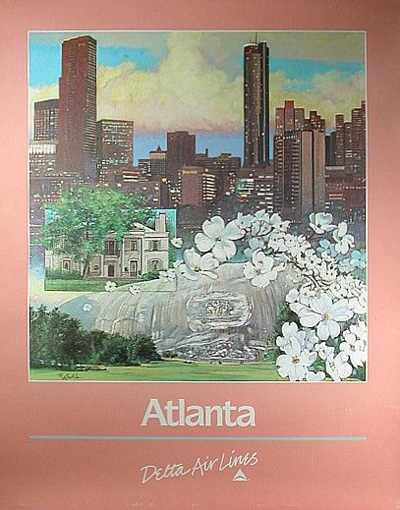 Hope you enjoyed this gallery. If you have any other Atlanta airline travel posters or can confirm the dates and artists of the ones on this page, please CONTACT ME!

RETURN TO THE HISTORY OF ATLANTA AIRPORT