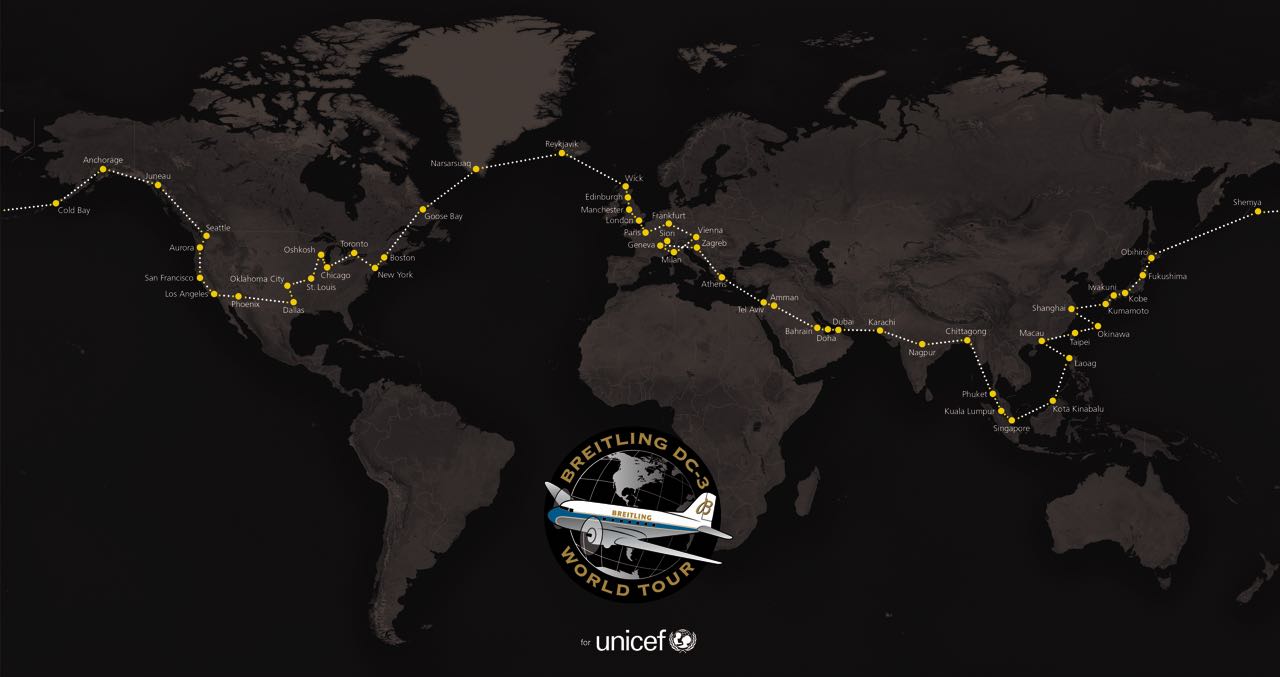 June 1, 2017 - The famed Breitling DC-3 HB-IRJ is currently in the middle of a 55-stop, 7 month around-the-world tour. The historic trip began in Geneva on March 9, seventy-seven years to the day since the first flight of this aircraft, and will continue in several stages through September. At 77 years old, the Breitling DC-3 is the oldest aircraft to ever circle the globe. So far, it has crossed the Balkans, the Middle East, India, and Asia. After a scheduled maintenance layover in Japan, it will head across the north Pacific into North America where it will spend several months touring the U.S. including an appearance at the Oshkosh fly-in.

Aside from its association with Breitling, this particular DC-3 is well known to many aviation enthusiasts as the former Provincetown Boston Airline N34PB. PBA, one of the last airlines in the U.S. to fly DC-3s in regular passenger service, operated this aircraft in Florida and New England until 1988. It was purchased in 2008 by pilot Francisco Agullo and a group of friends with Breitling’s support, restored to pristine condition and has since participated in numerous airshows and Breitling events.

Breitling is marking the event with a 500-piece limited edition of its Navitimer aviation chronograph, distinguished by its caseback engraved with the Breitling DC-3 World Tour logo. All 500 pieces are aboard the DC-3 while it circles the globe and will be available in Fall 2017, each with a logbook and certificate signed by the flight captain. 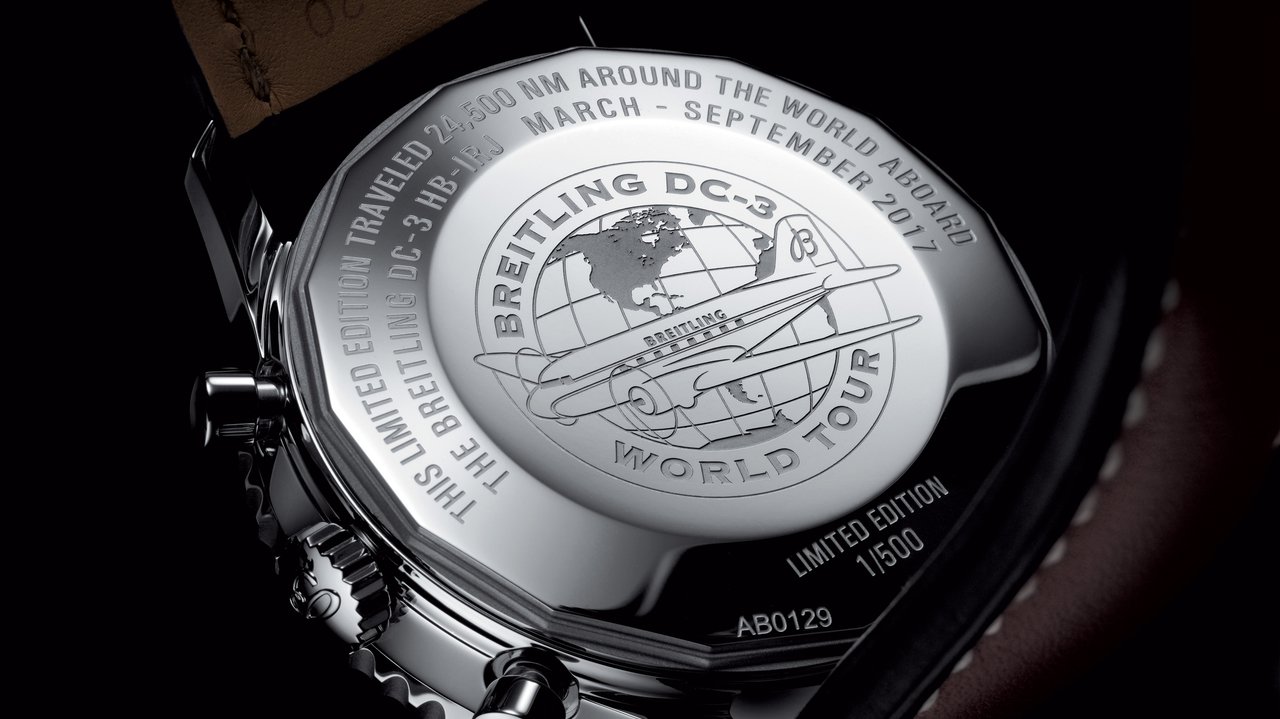 The following photos, courtesy of the Breitling DC-3 World Tour facebook page, were taken during the first half of the epic journey.

Jean-Paul Girardin, Vice-President of Breitling and the Breitling DC-3 crew standing in front of HB-IRJ shortly before commencing the World Tour in Geneva on March 9, 2017. 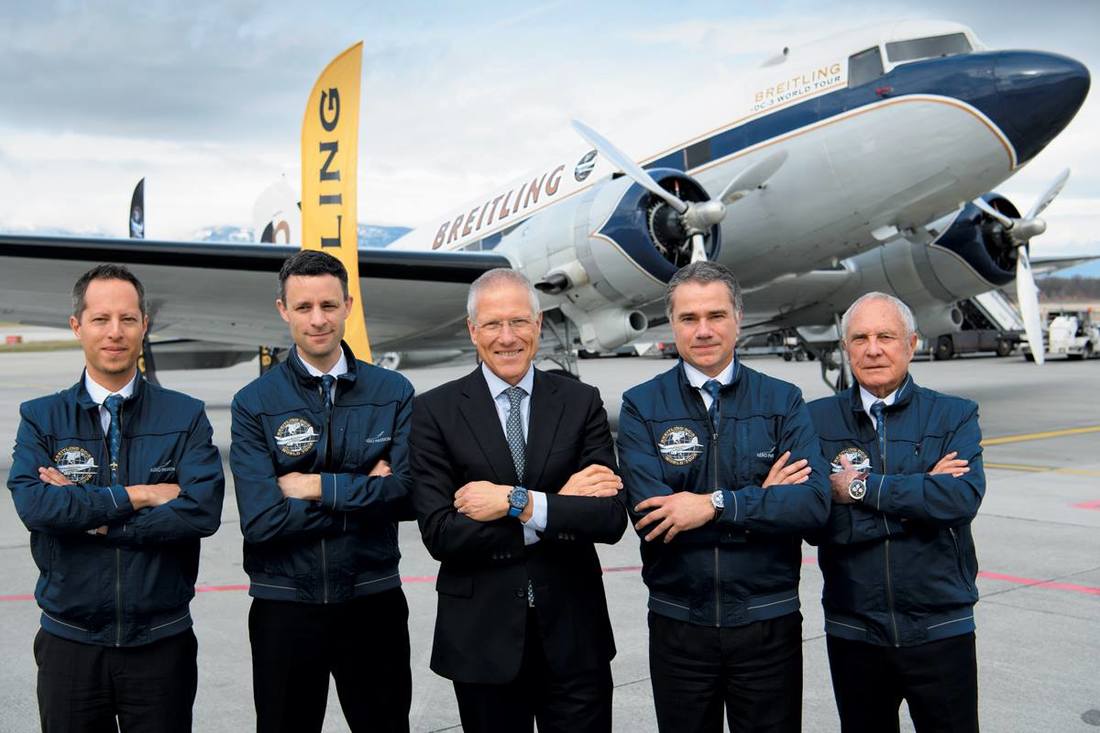 Flying above Lake Geneva and the Jet d'Eau fountain during the World Tour departure. 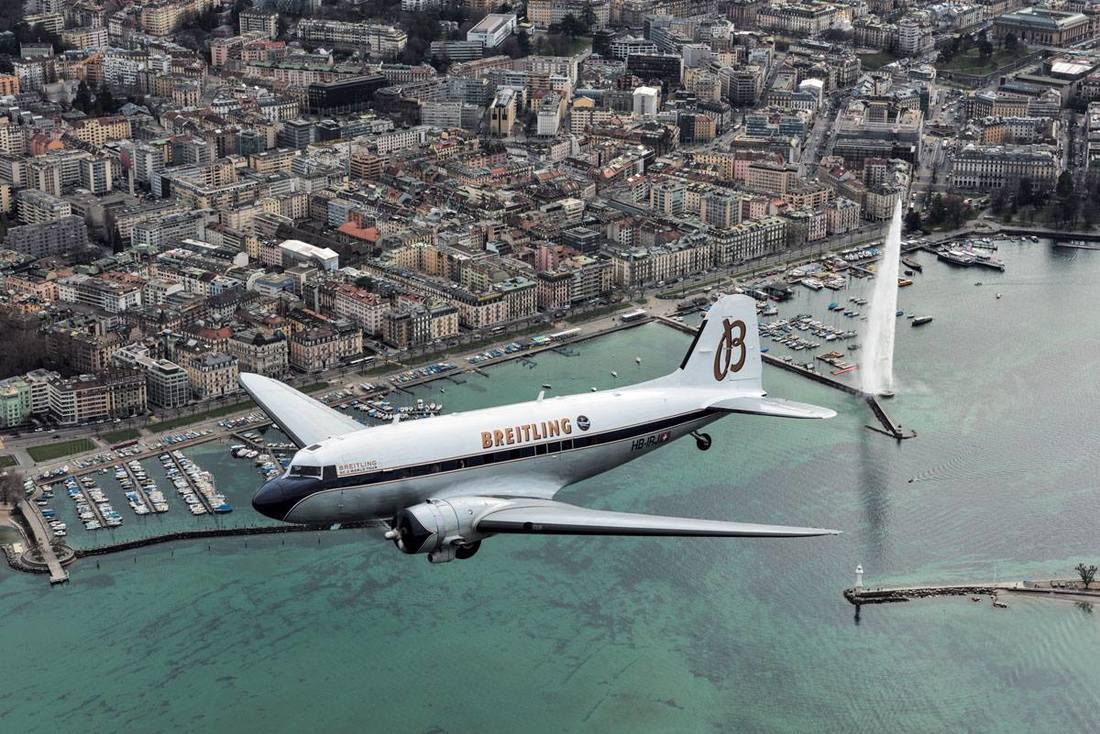 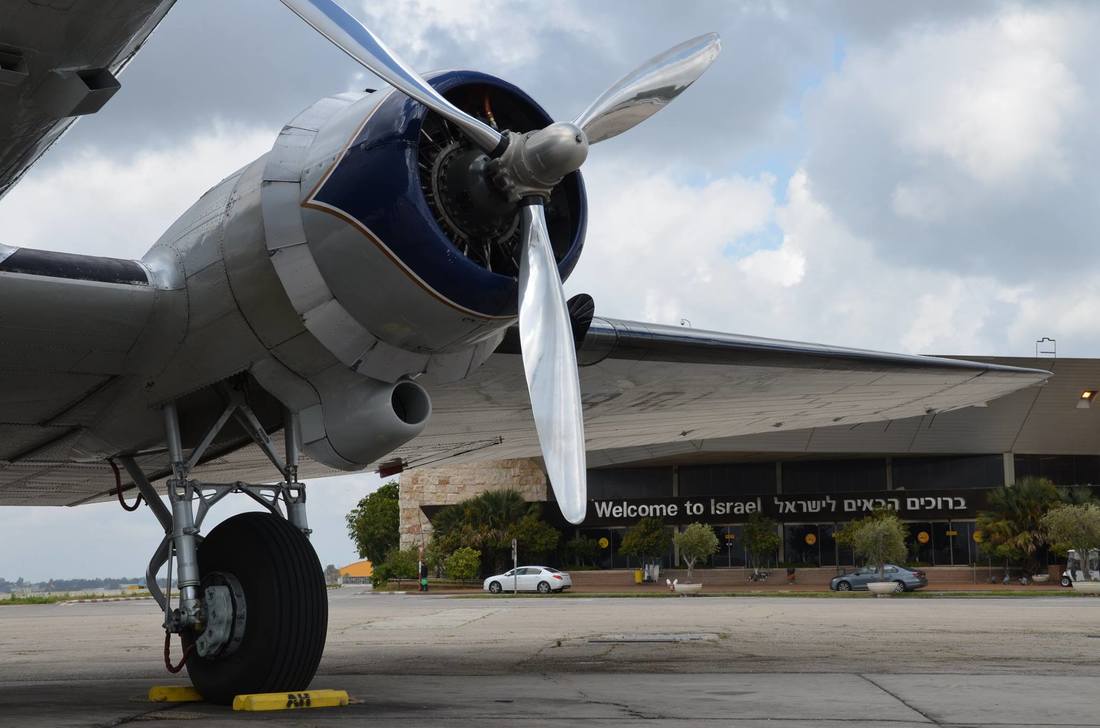 Stunning view of the Breitling DC-3 flying formation with the Royal Jordanian Falcons, the national aerobatic team of Jordan. Many thanks to them. March 17, 2017. 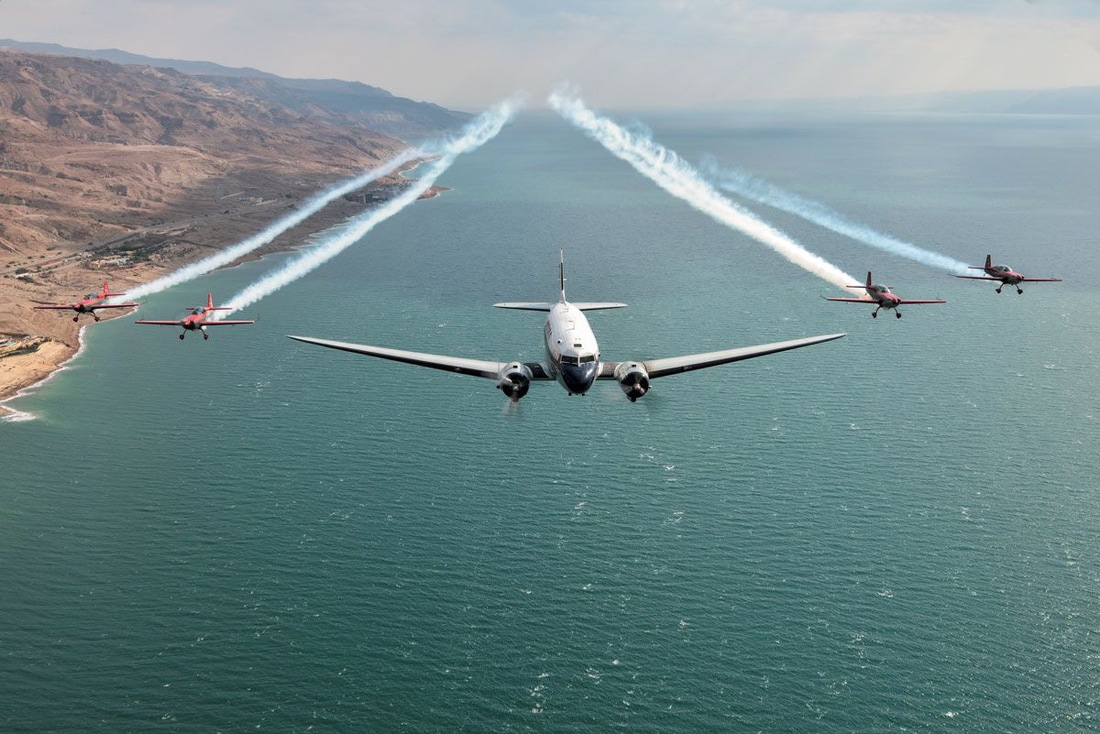 Passing over the Palm Jumeirah in Dubai. 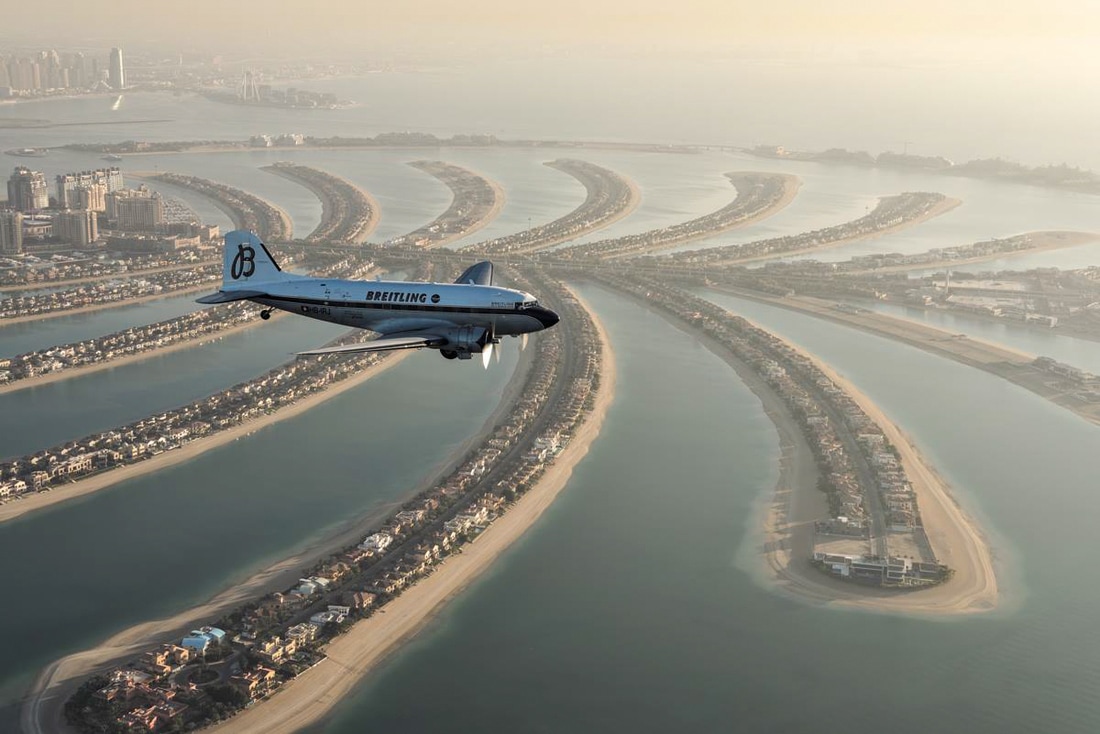 Flying past the Burj al Arab in Dubai. 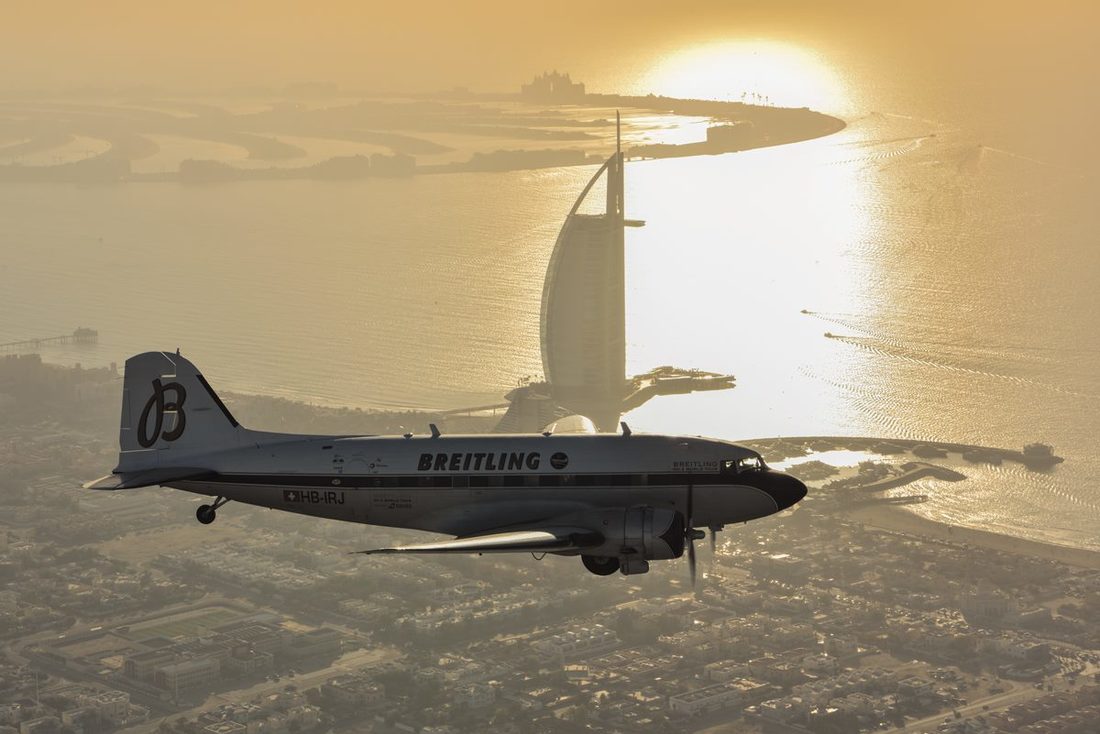 Another breathtaking picture of the Breitling DC-3 during its stay in Dubai. March 24, 2017. 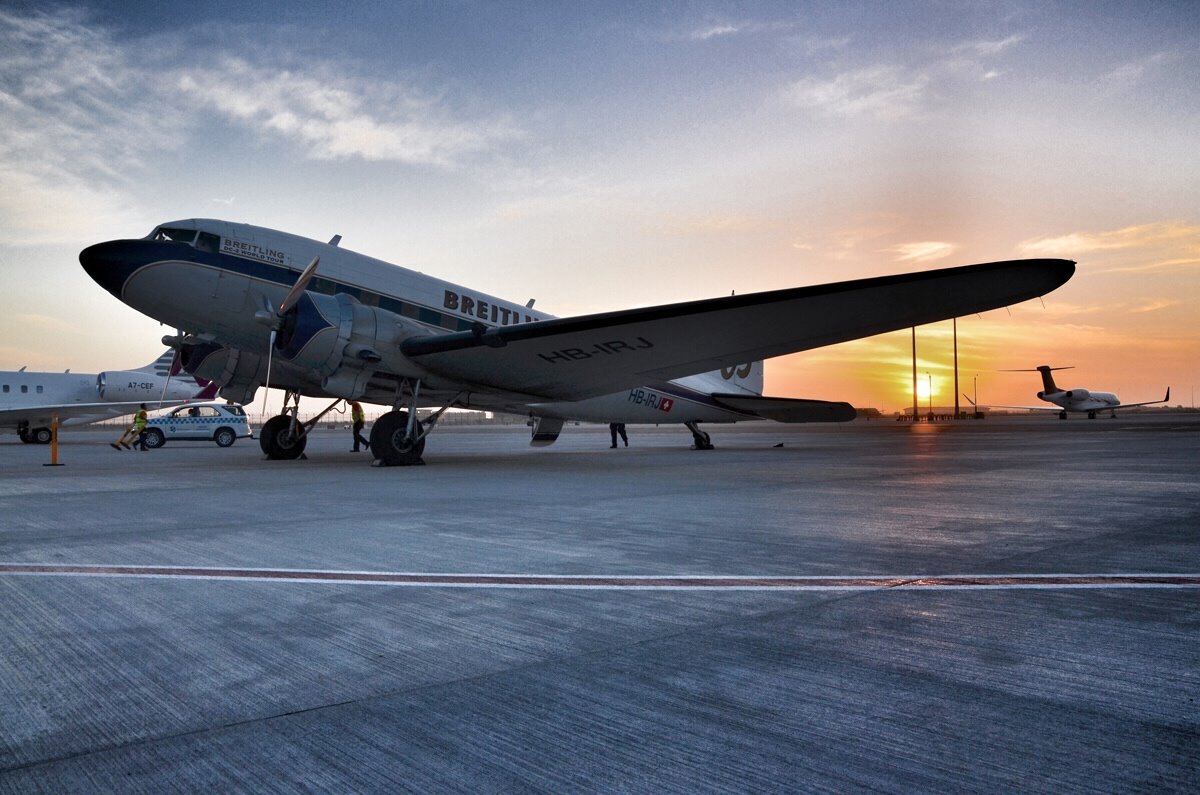 Enjoying the spectacular scenery of Phuket, Thailand on April 3, 2017. 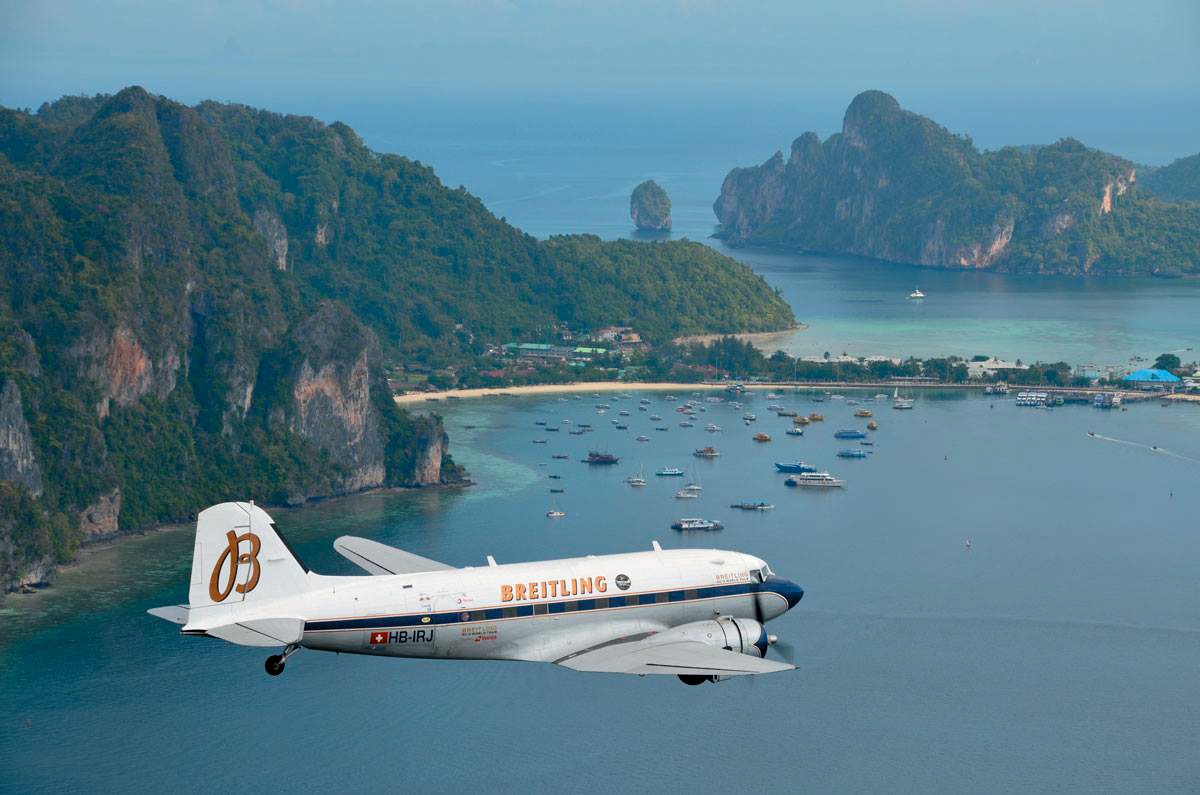 On the way to Kuala Lumpur the Breitling DC-3 was joined by four PC-7s of the Royal Malaysian Air Force near Alor Setar. April 3, 2017. 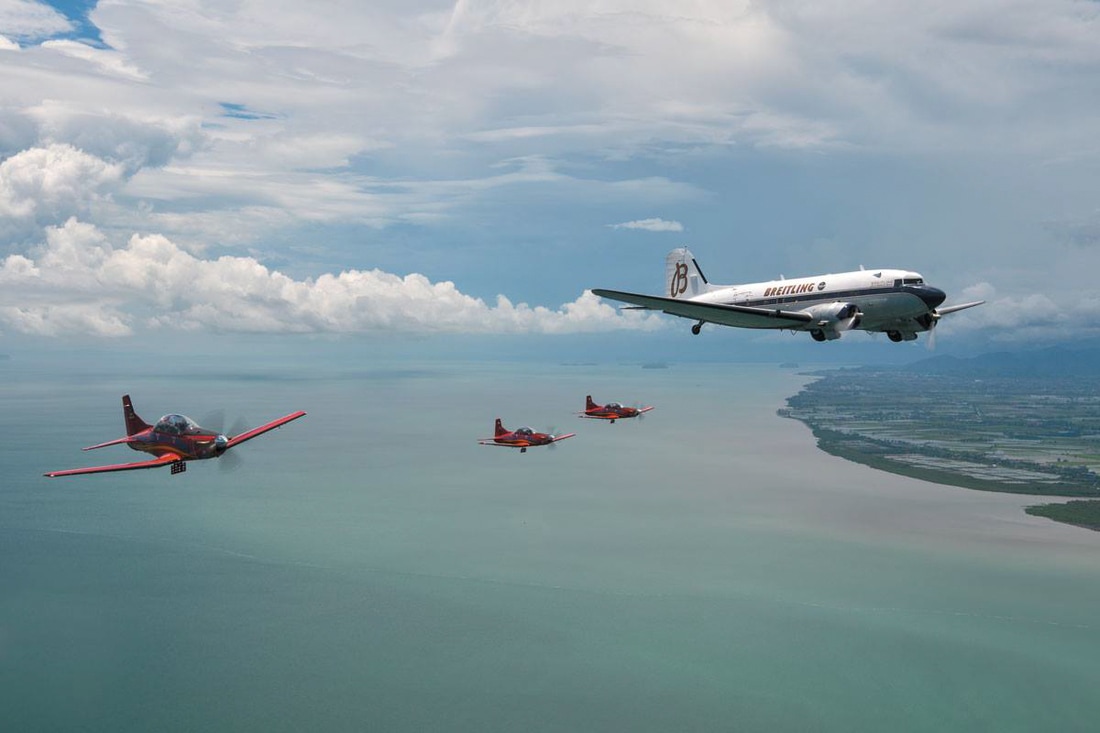 Passing by some of the landmarks of Kuala Lumpur, Malaysia. In the distance you can see the Petronas Twin Towers which are the tallest twin towers in the world reaching 1,483 feet. To the far right is the Kuala Lumpur Tower which reaches 1,381 feet. 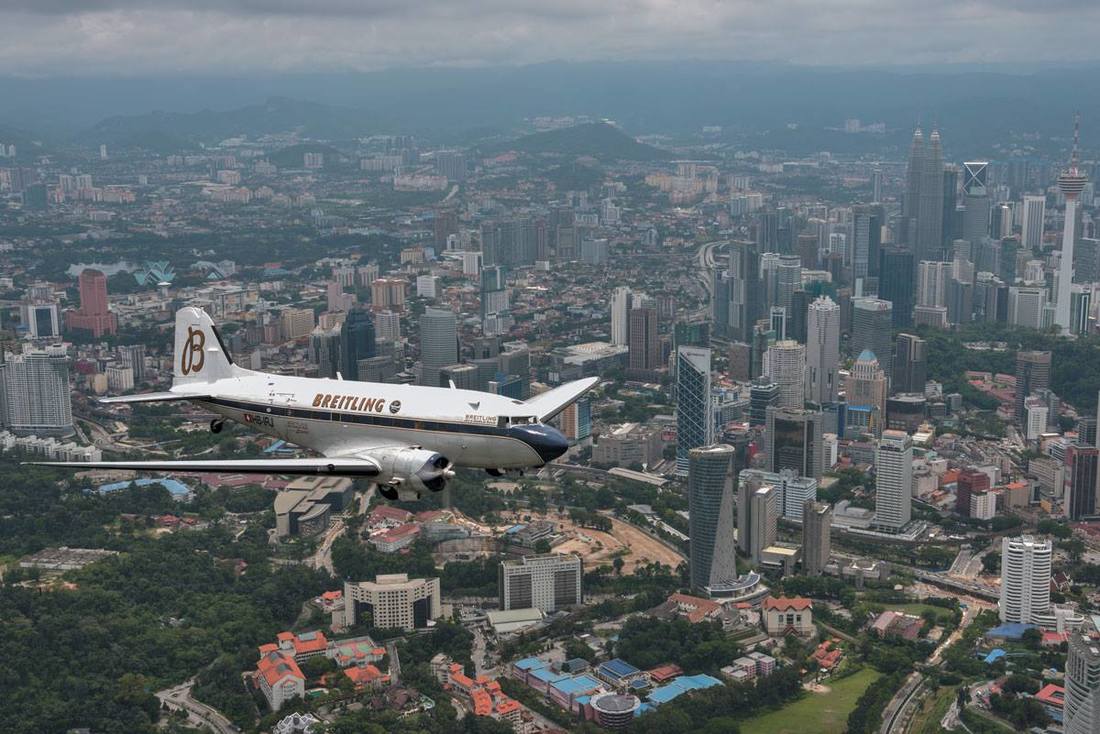 The Breitling DC-3 received a water canon salute when it arrived at Seletar Airport, Singapore on April 7, 2017. 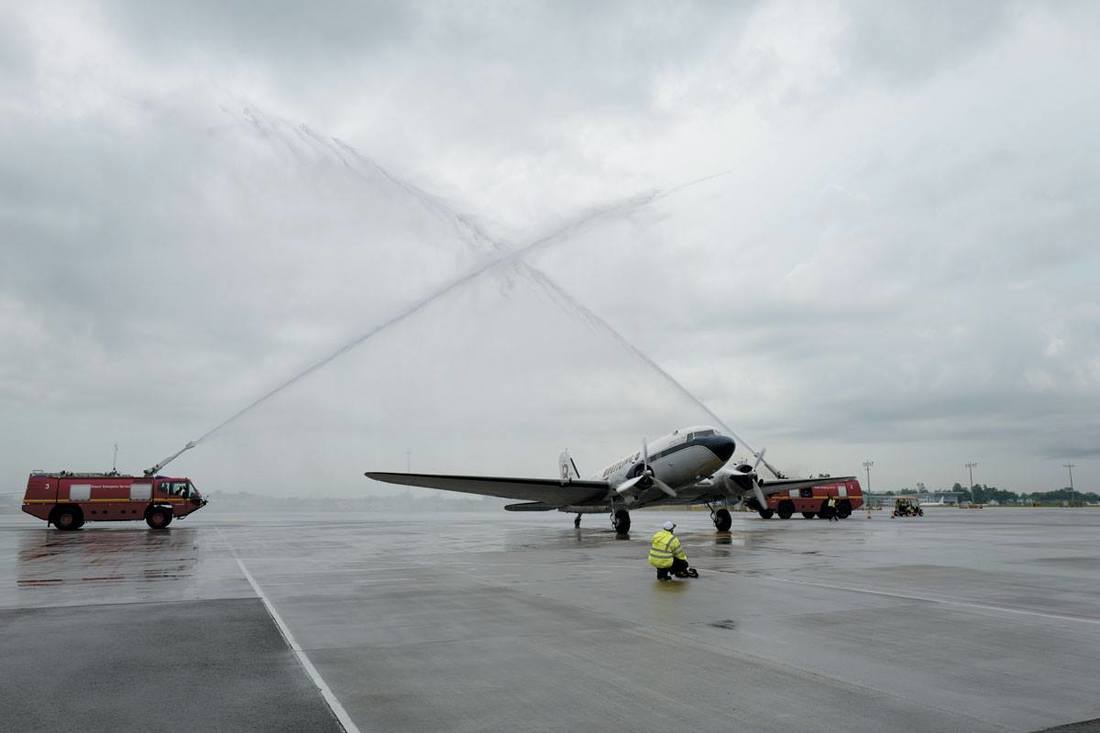 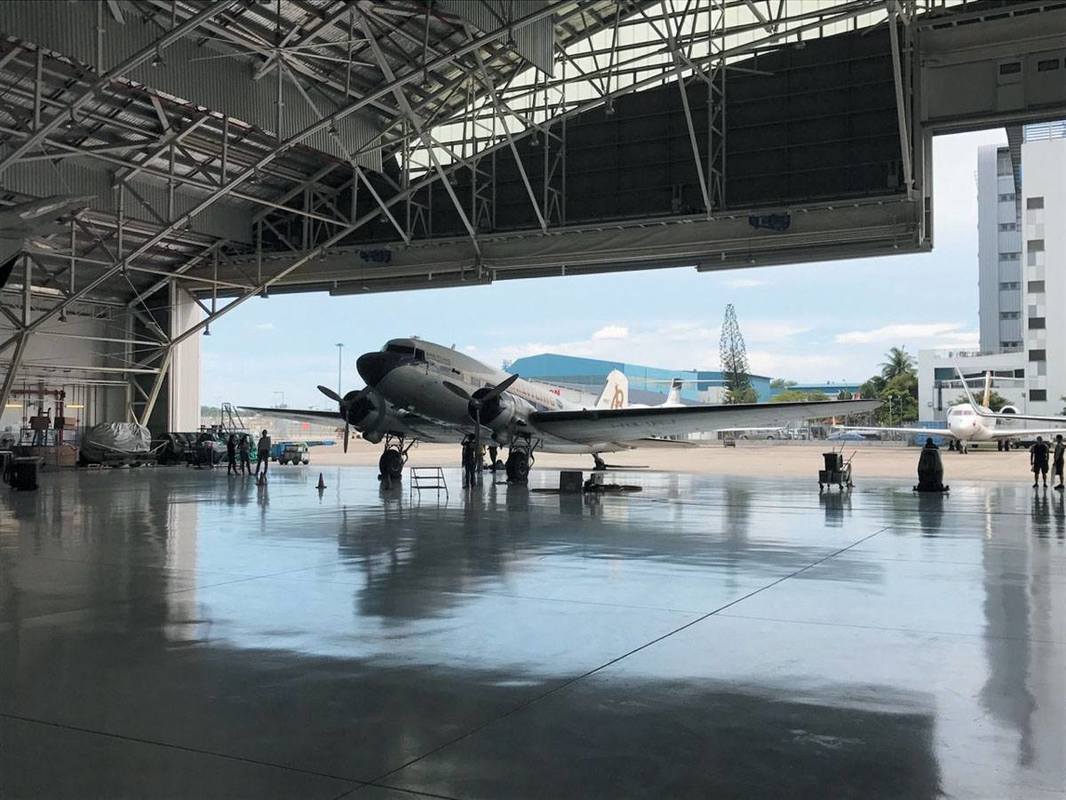 Fantastic cockpit view taken from behind the throttle quadrant of HB-IRJ. 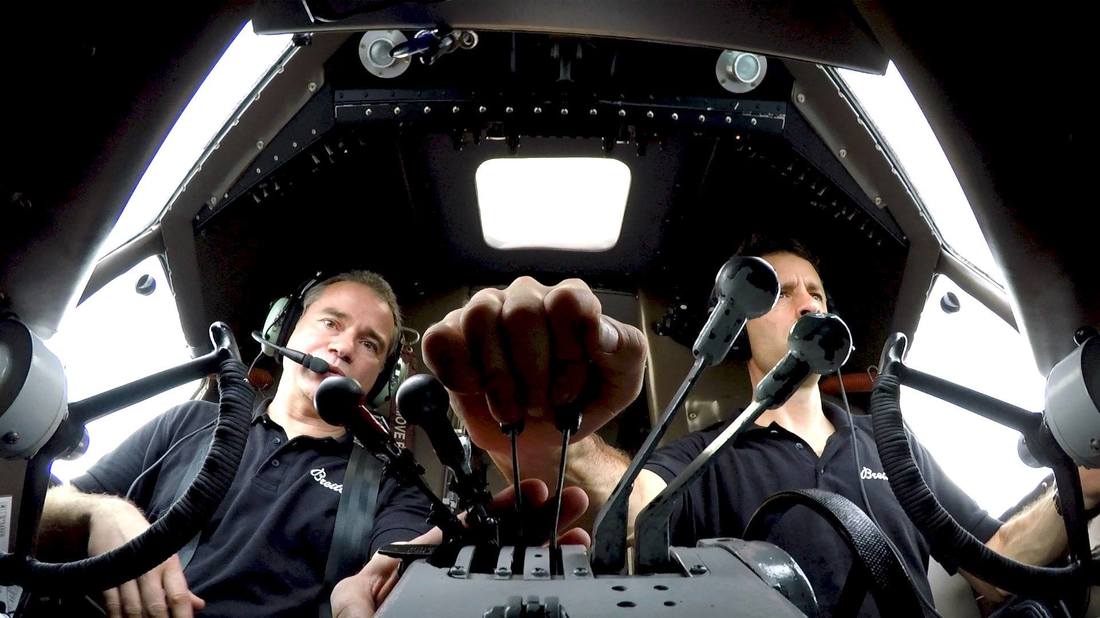 On the ramp at Macau, China. 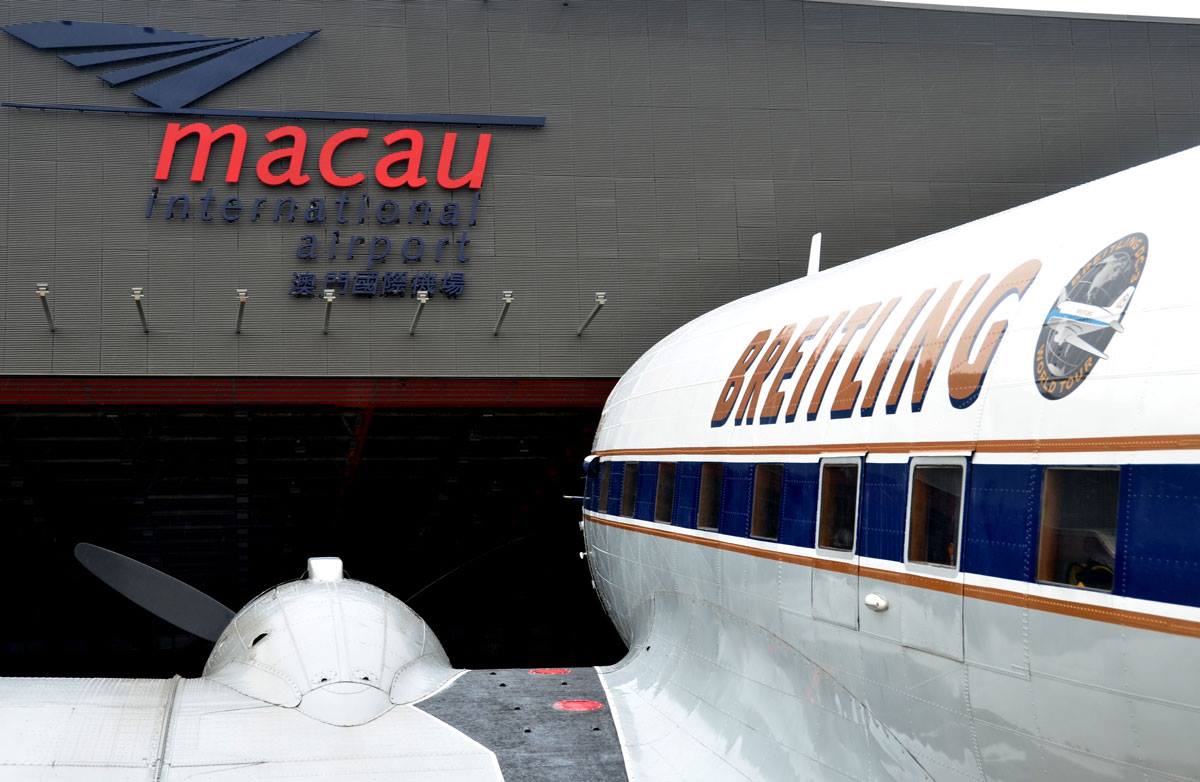 The Breitling DC-3 and one of the world's tallest classical Chinese buildings, the Grand Hotel located in Taipei. 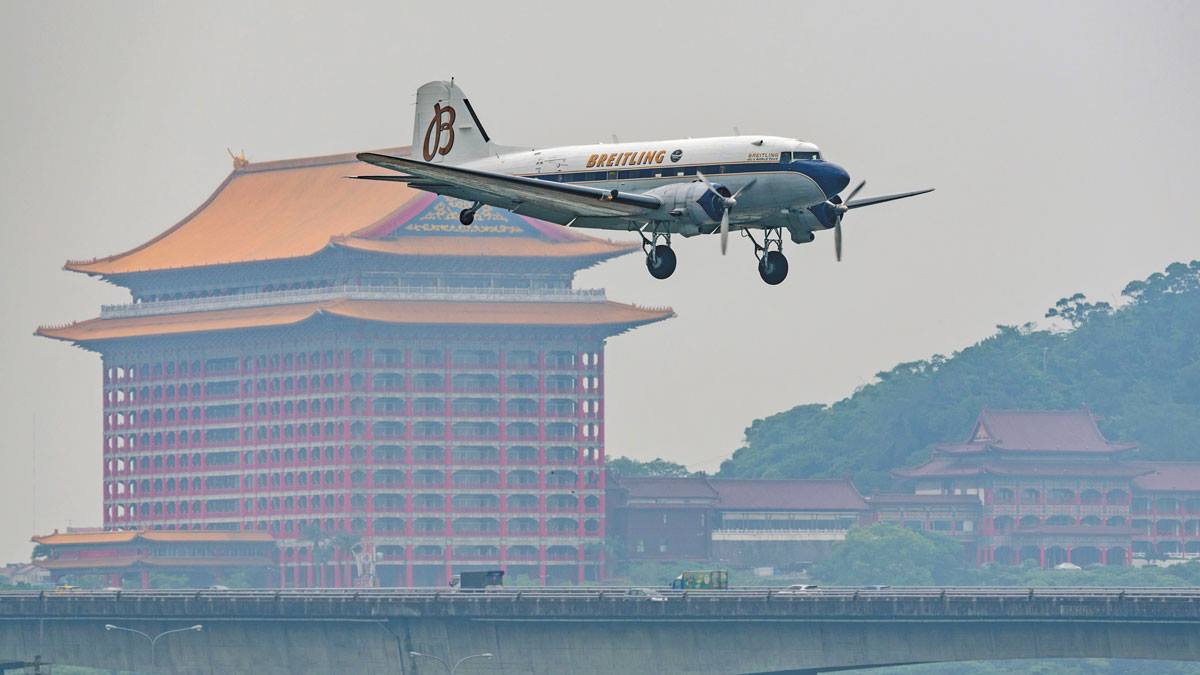 The Breitling DC-3 flying over Mount Aso, the largest active volcano in Japan. May 2, 2017. 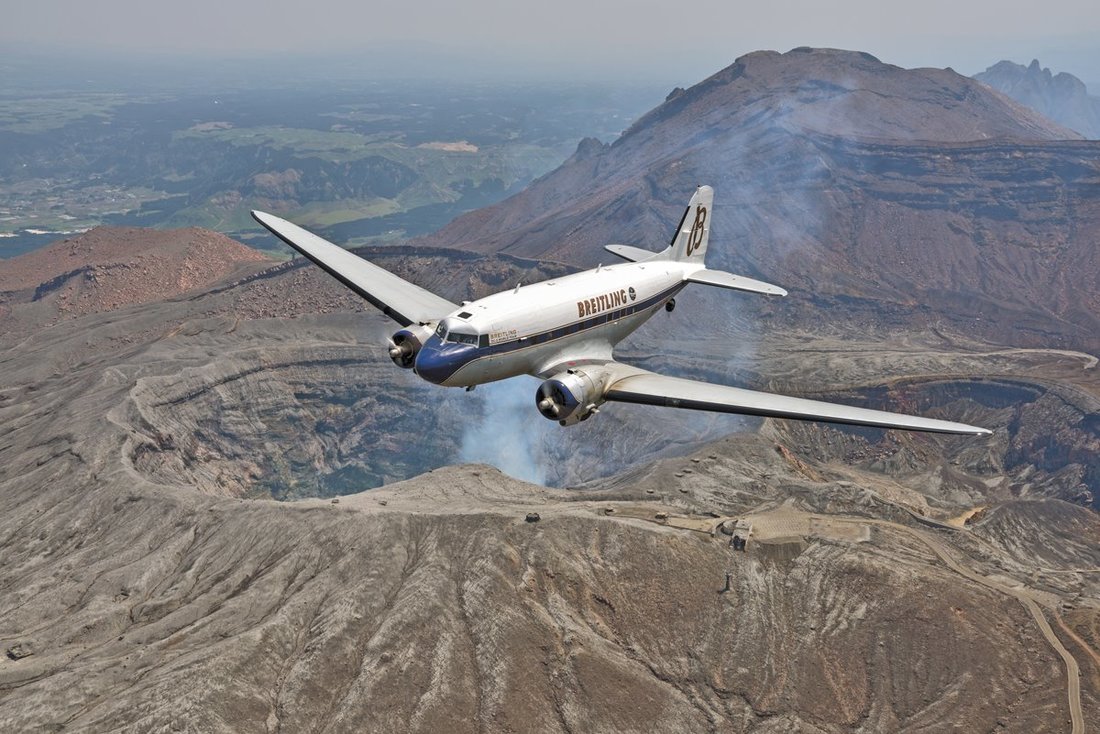 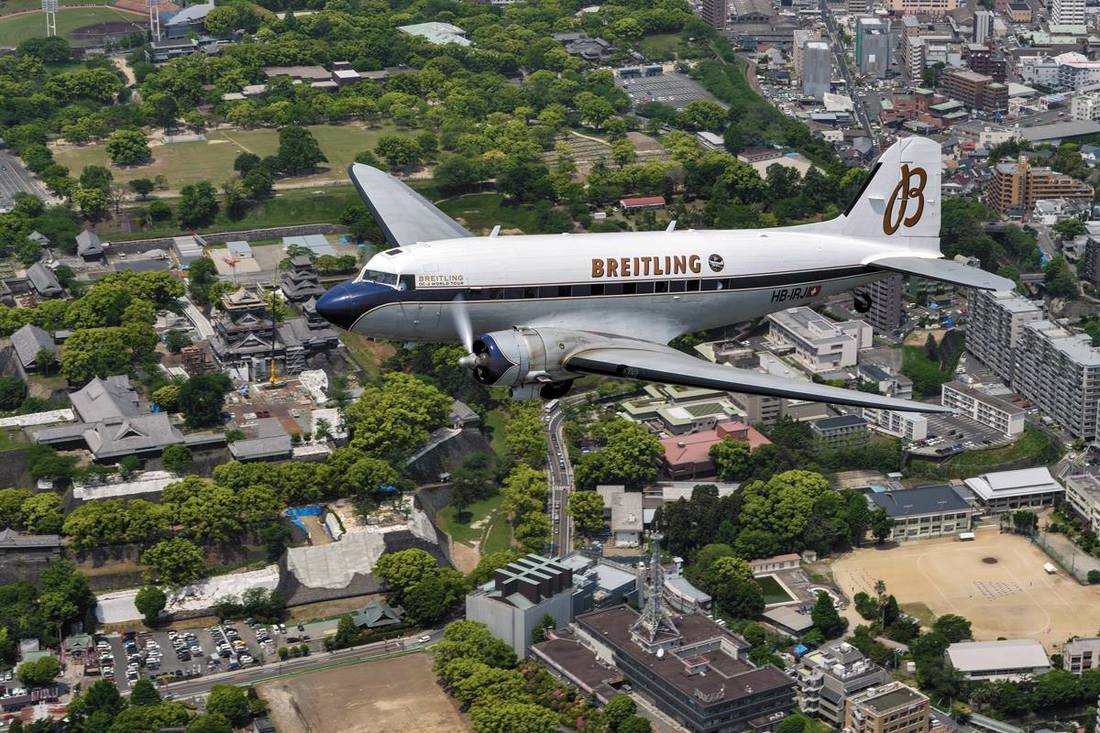 On May, 5th the Breitling DC-3 participated in Iwakuni Friendship day, an event which included both static displays and aerial performances. The event attracted more than 200,000 visitors. 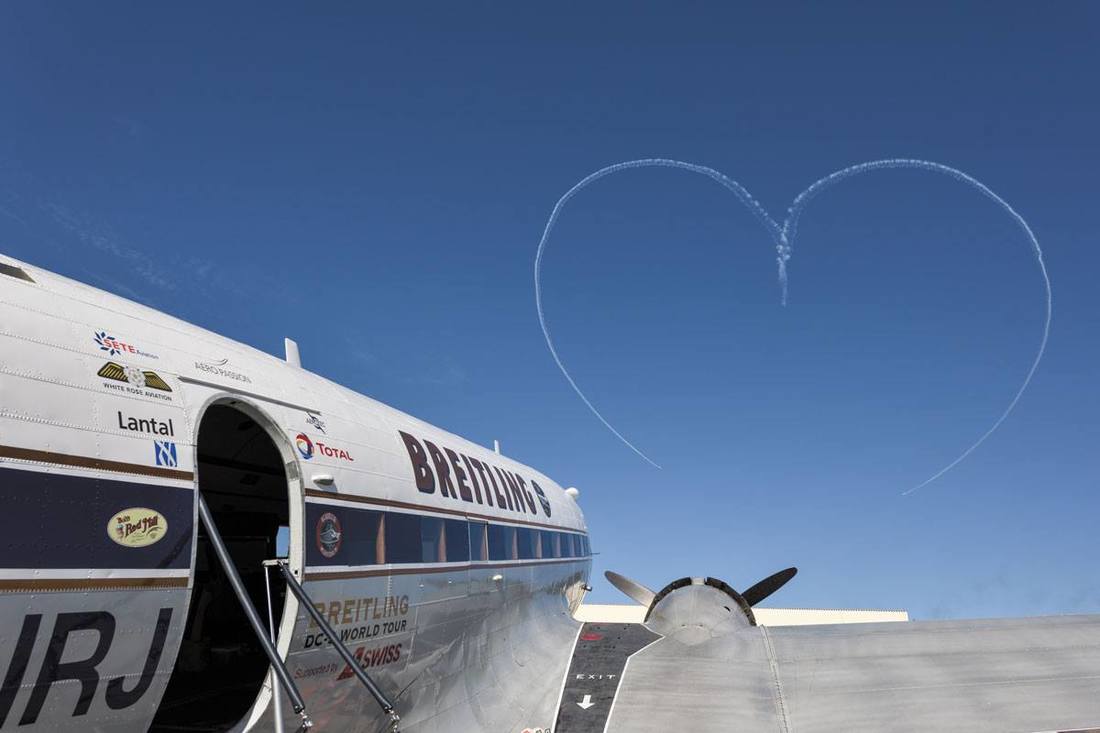 After a planned maintenance break and local flights in Kobe, Japan, the DC-3 headed north to Sendai on May 22. Along the way, HB-IRJ circled Mount Fuji. The Breitling crew posted on facebook: "With the engine performance of our Grand Old Lady, flying at an altitude of 12,500 ft was quite a challenge as we had to stay in formation with the camera ship, a Beechcraft Bonanza. Thank you Katsuhiko Tokunaga for these amazing shots! It is not every day that one can fly so close to Mount Fuji and on top of that with a DC-3! " 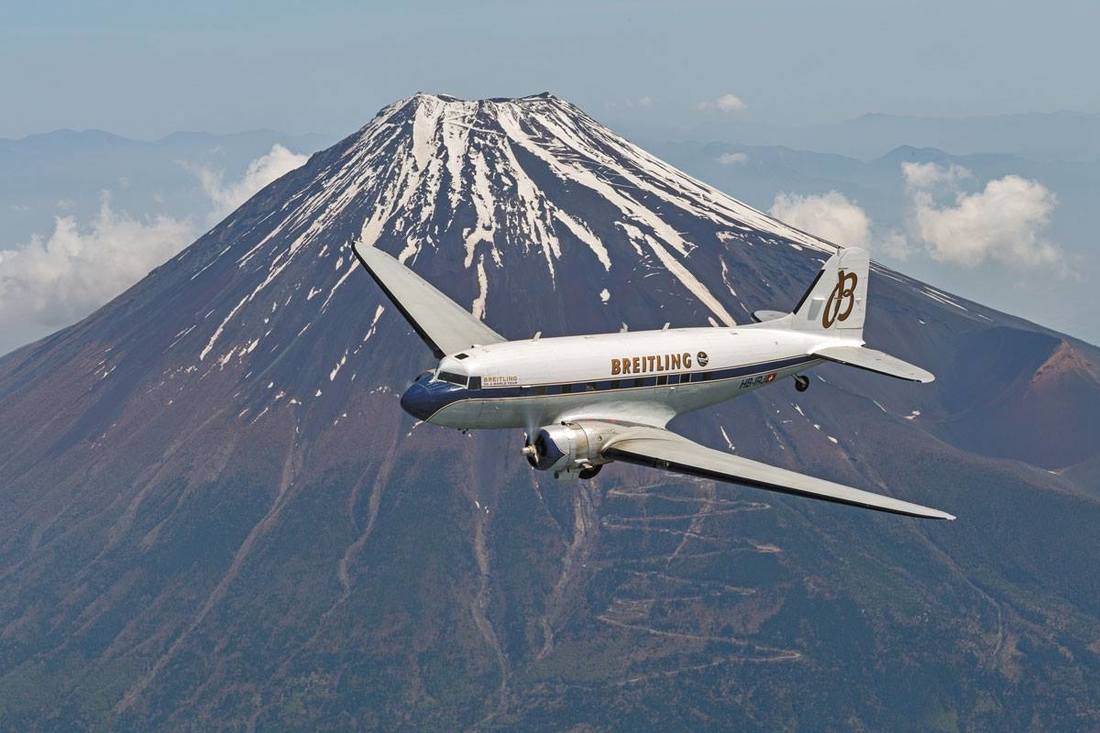