The first hangar at Candler Field was constructed by Atlanta aviator Doug Davis in December 1926 along the homestretch of the abandoned racetrack. Davis, along with Beeler Blevins was an influential figure in the early days of the airport. He would later go on to fly with Eastern Air Transport and piloted the first flight between Atlanta and New York. Doug Davis Drive, on the northeast corner of Hartsfield - Jackson airport, is named in his honor. 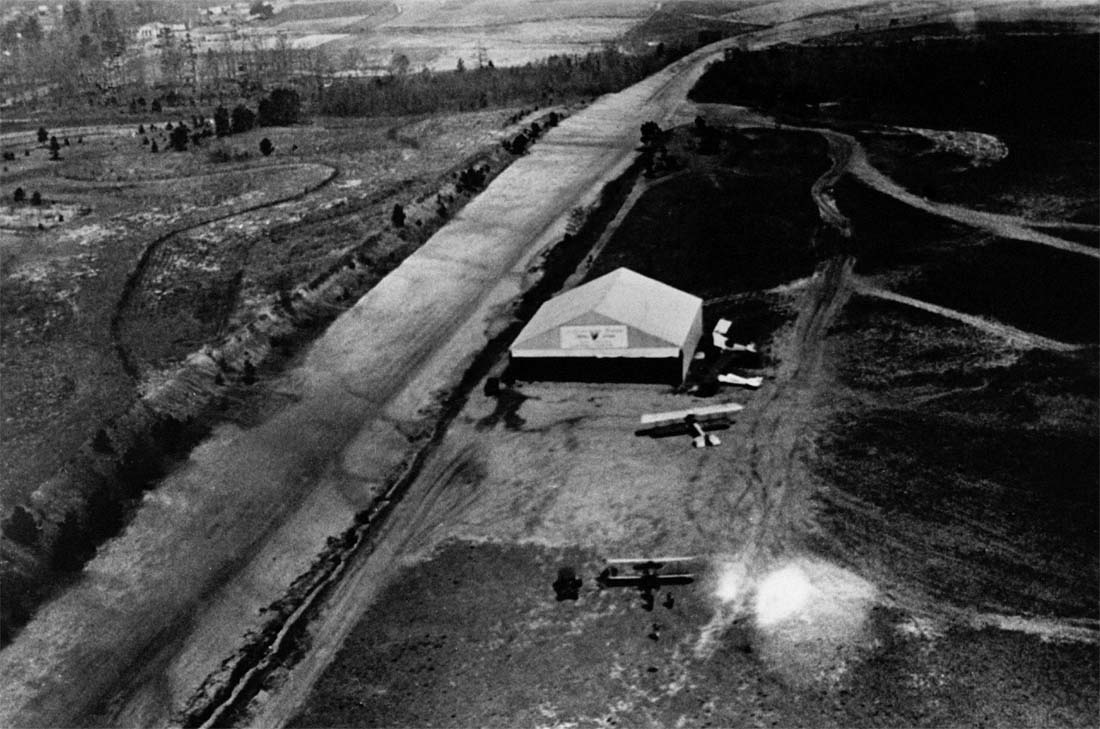 A ground level view of the Douglas Davis hangar showing his fleet of Waco biplanes. These aircraft were used as part of a Curtiss Candy advertising campaign to introduce Baby Ruth candy bars to southern patrons. Mr. Davis would fly above towns and cities across the south, tossing handfuls of candy bars over the side and bombarding the streets below with the chocolate-coated projectiles. 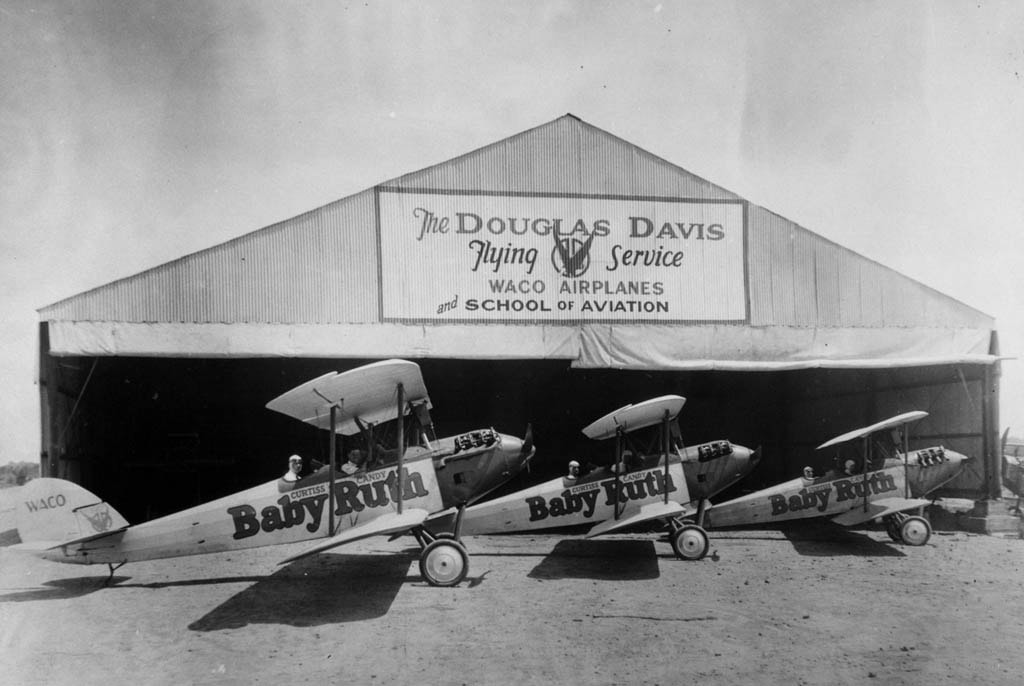 This grainy image from early 1927 shows the Doug Davis hangar, to the left, and a small "rest house" below that, just to the right of intersection of the road with the track. The landing strip extends southeast from the hangar. Pitcairn Aviation would begin construction of a hangar in the center of the racetrack oval in June 1927. Credit: The City Builder, August 1927. 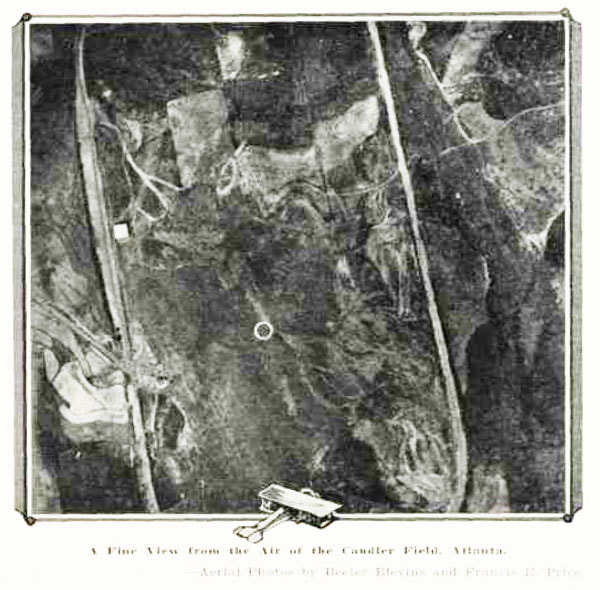 Here's the above aerial photo, seen at top right in this mash-up, georeferenced and imported into Google Earth. The main Hartsfield - Jackson terminal is at far left and the international terminal and concourse F can be seen at far right. 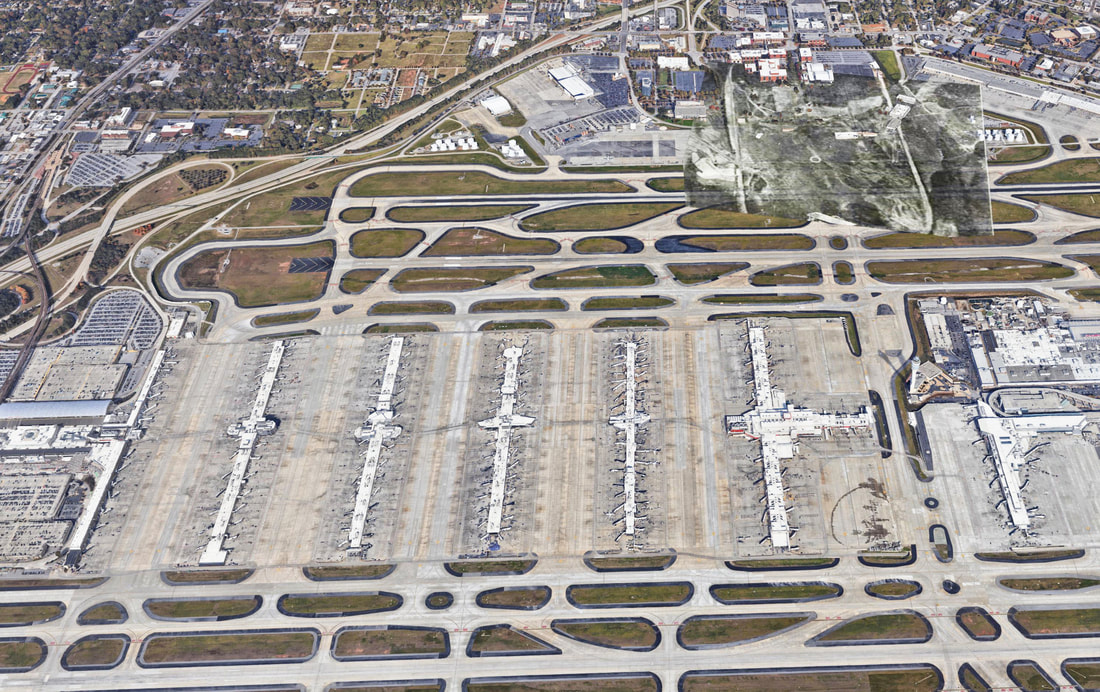 A closer view gives a great illustration of the 1927 layout in relation to the current airport. 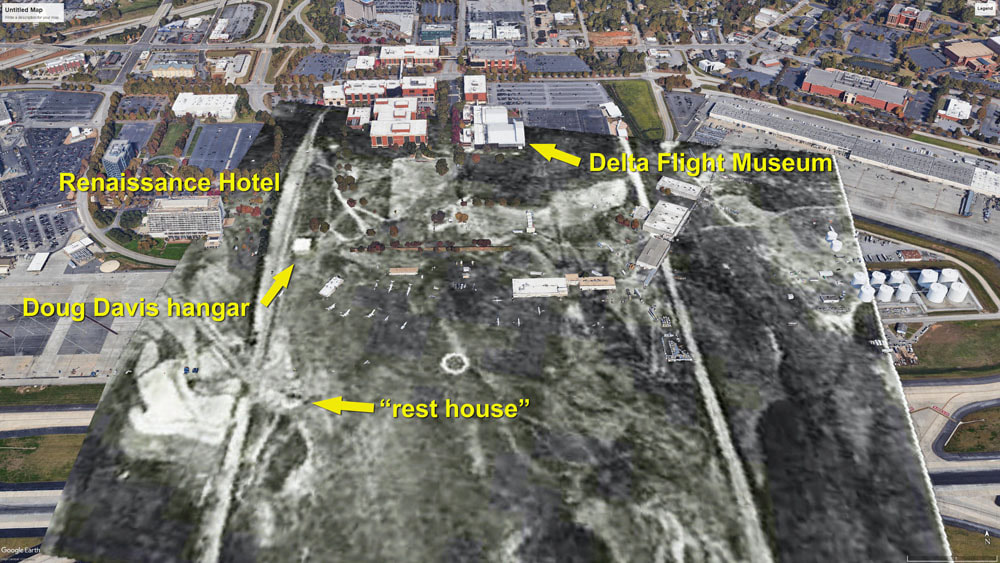 Development of the airport during 1927 progressed at a rapid pace with the construction of several new buildings and the relocation of the Davis hangar. Photos from this time period are often incorrectly dated and miscaptioned in the digital archives of various universities and historical institutions. In order to accurately date these photos, I put together this timeline from Atlanta Constitution articles.
1926
September 15 - Florida Airways begins mail flights between Atlanta and Miami.
​November 20 - Doug Davis to build Atlanta's first hangar.
December 31 - Florida Airways suspends air mail route. 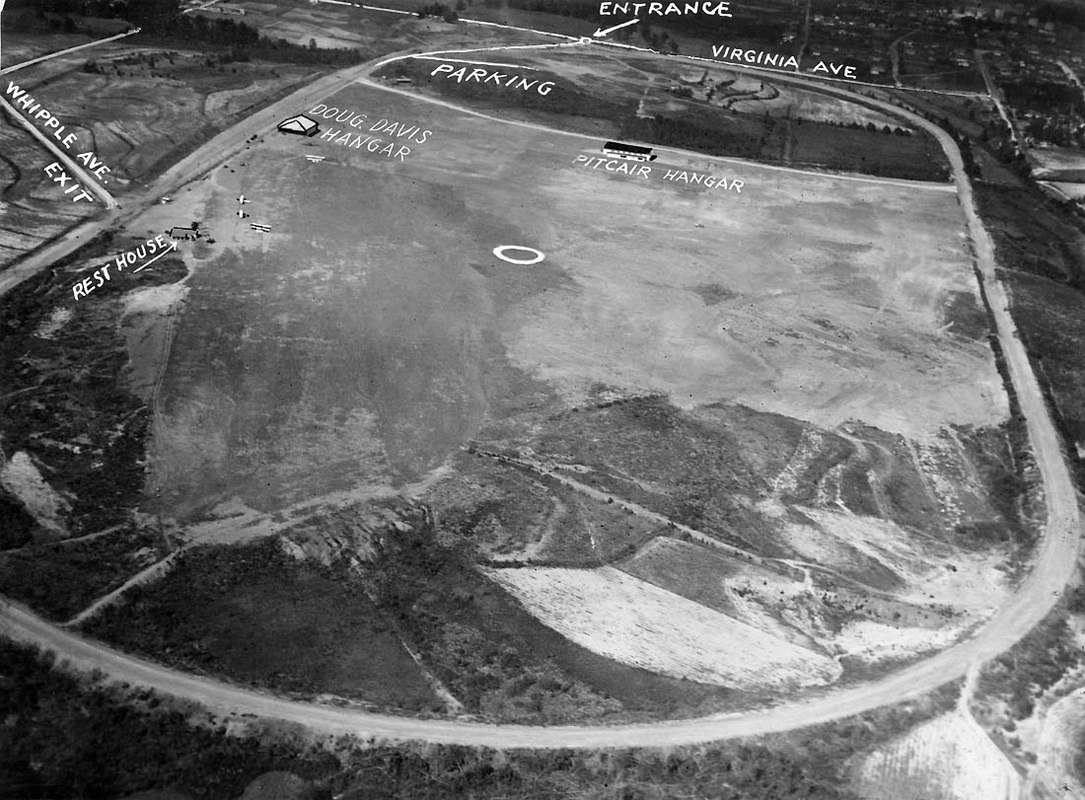 In this view of the airport from September or October 1927 the Pitcairn hangar is seen at left and the Doug Davis hangar is at the bottom. This was shortly before the Davis hangar was relocated next to the Pitcairn building and if you look closely you can see rails or timbers laid out on the ground next to the building in preparation for the move. 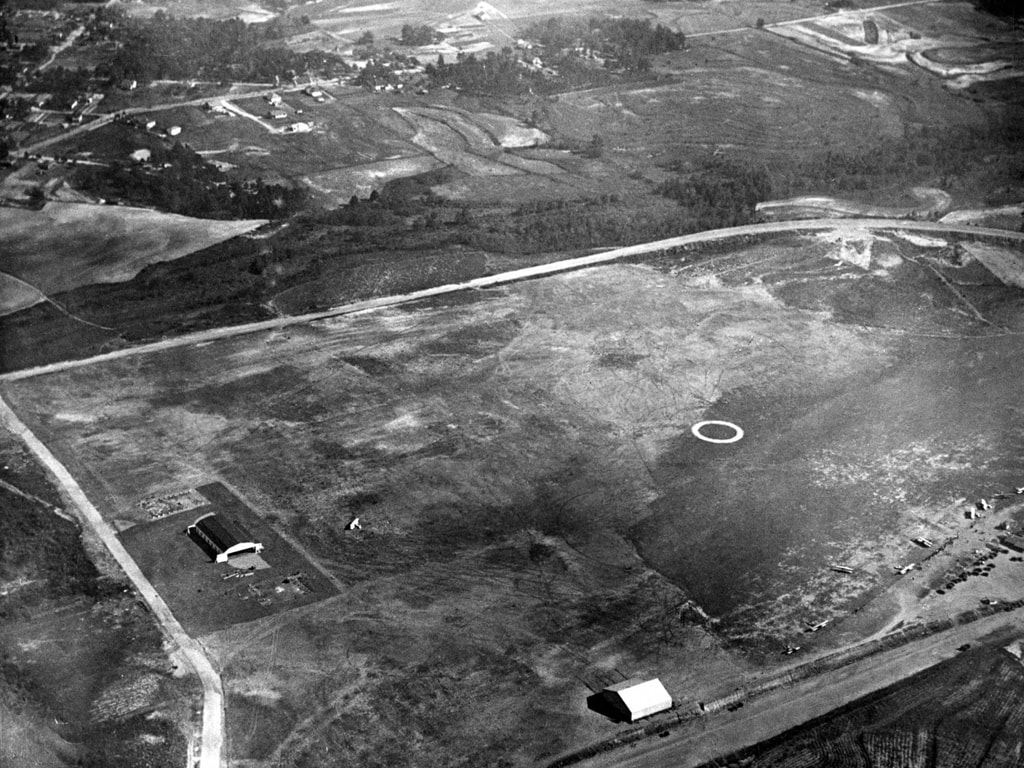 A close-up of the above photo shows the foundation for the Beeler Blevins hangar under construction at the top left, the completed Pitcairn hangar at center, and the new foundation for the soon to be moved Doug Davis hangar in the foreground. 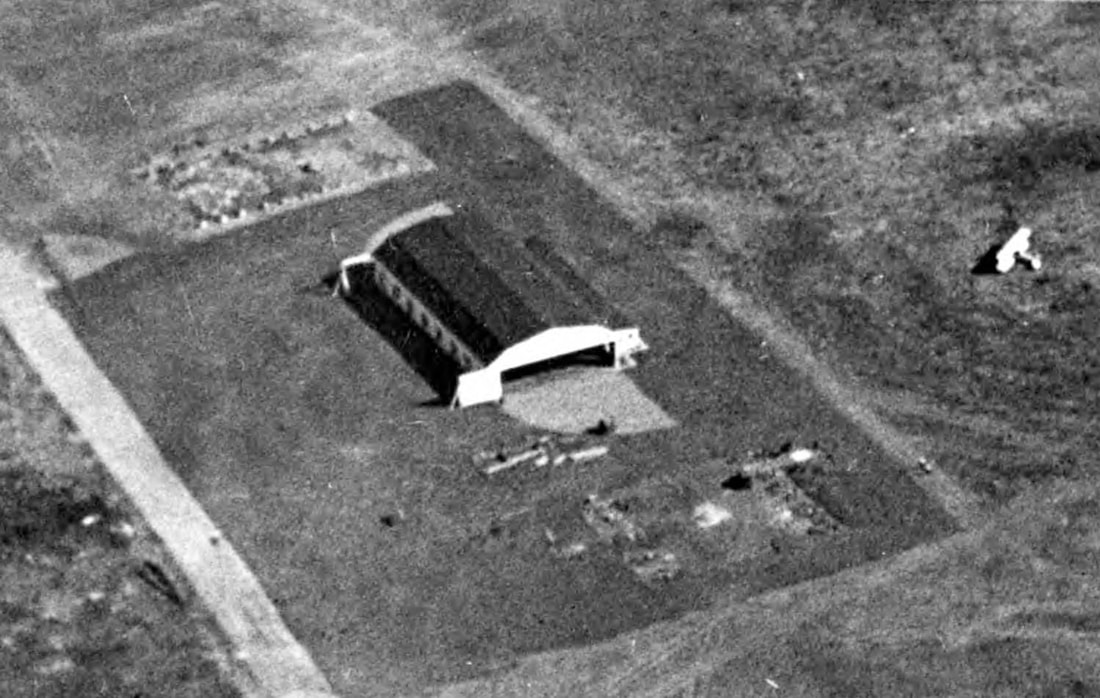 Charles Lindbergh visited Atlanta Airport on October 11, 1927 during a cross-country tour following his solo flight across the Atlantic. During his visit to Atlanta Lindbergh ended up ankle deep in mud after his aircraft became stuck in the wet Georgia red clay. 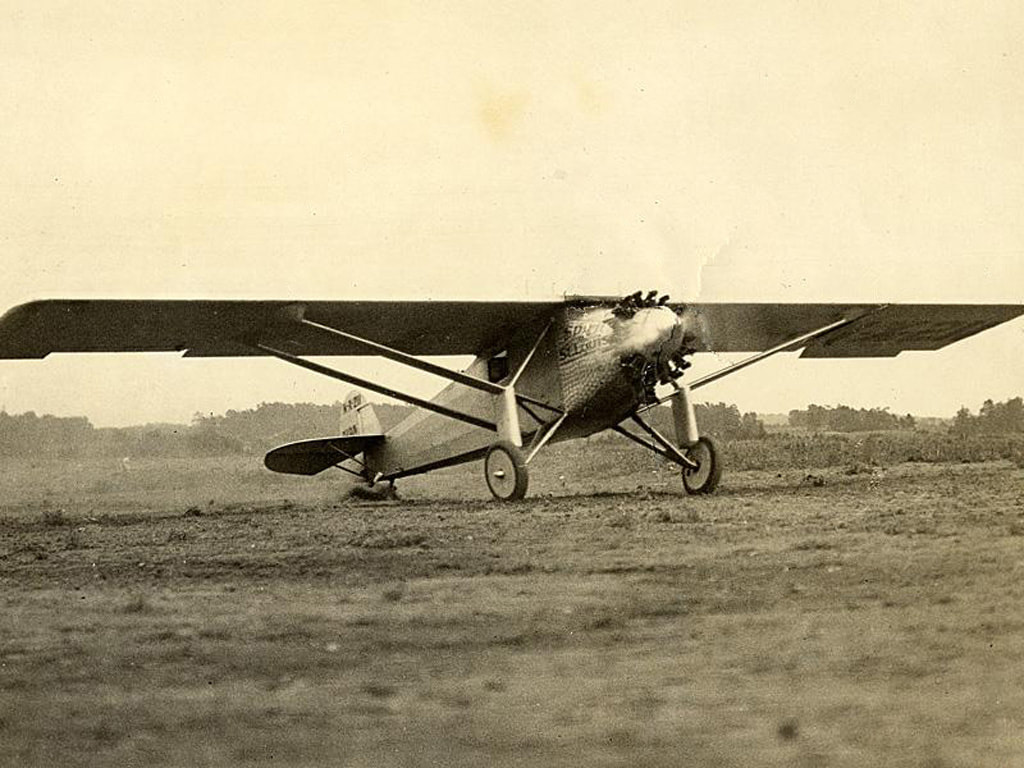 Lindbergh was met by local dignitaries upon his arrival at Candler Field and escorted to downtown Atlanta for a parade in his honor. With thousands of spectators lining the streets to see him, it was the largest public gathering in Atlanta's history at the time. He then gave a speech to a crowd of 20,000 at Georgia Tech's Grant Field promoting the development of commercial aviation and Air Mail services. His forward-thinking vision coupled with his status as a national hero helped change the public perception of air travel from that of a dangerous novelty to an accepted form of transportation. His visit to Atlanta was a major catalyst for the rapid expansion of Candler Field that followed. 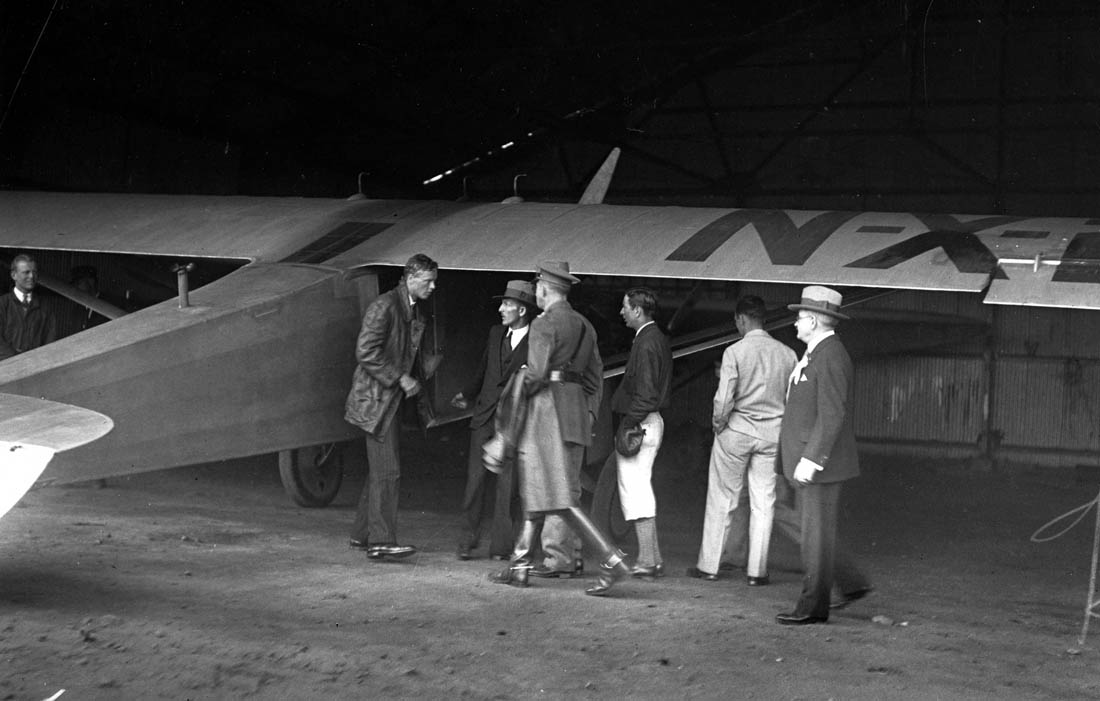 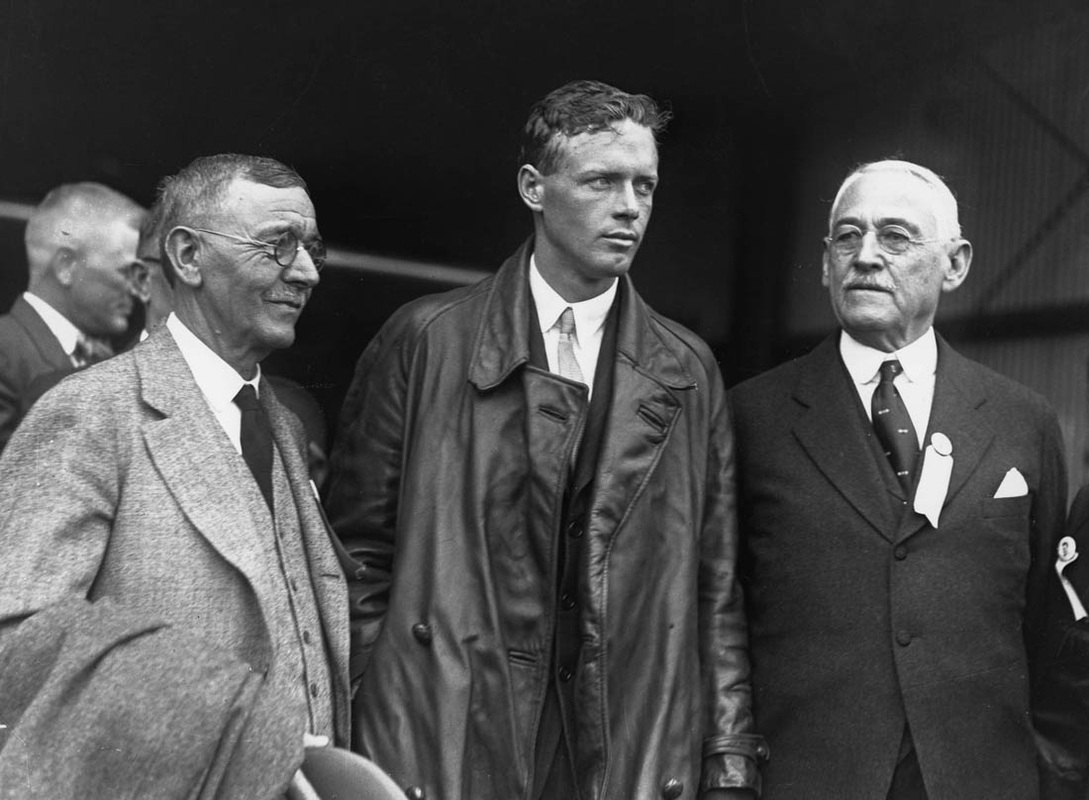 ​It's fair to say that Lindbergh was the biggest celebrity in the world at that time and his arrival in Atlanta was the local event of the year. The following day, nearly every story on the front page of the Atlanta Constitution was dedicated to his visit. 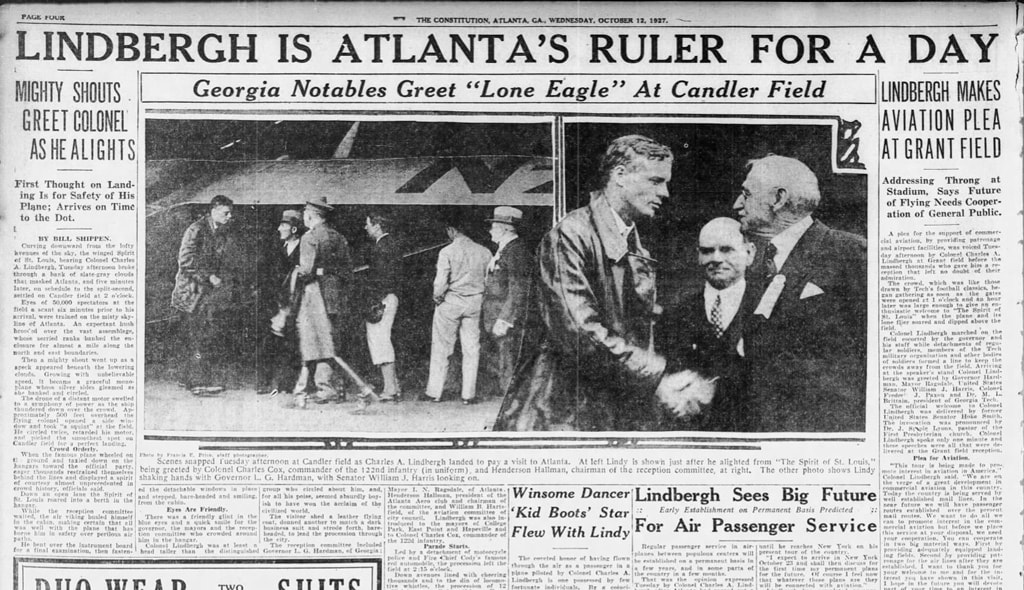 This photo from the November 27, 1927 Atlanta Constitution shows the initial airport layout nearing completion. The newly relocated Doug Davis hangar is at left and a new tower including a spotlight to guide aircraft in at night stands in front of it. The Pitcairn hangar is at center and the Beeler Blevins hangar is under construction at right 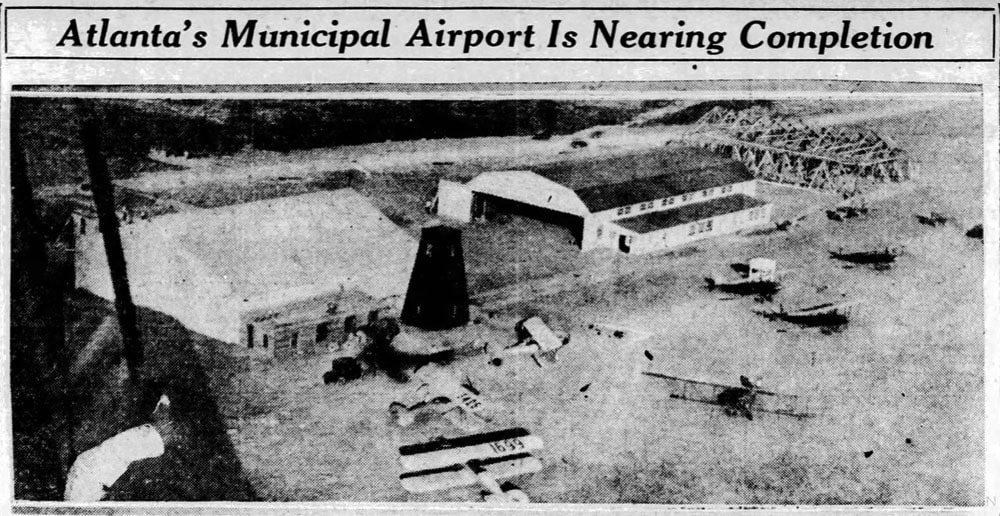 The airport was officially opened to the general public on December 31, 1927. A crowd of over 600 turned out on the cold, windy day for a short ceremony followed by the activation of the airport's new lighting system. In this photo you can see the new lighting tower featuring a spotlight that was used to guide aircraft at night and in low visibilty. 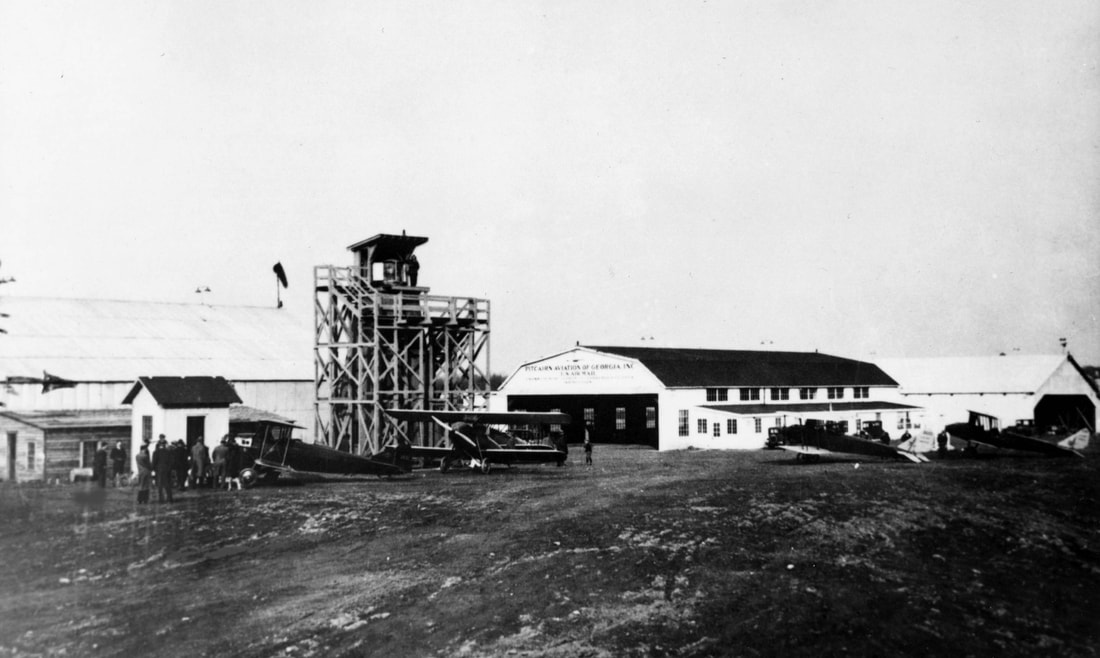 A circa 1928 view of Atlanta Airport facing east towards Hapeville. 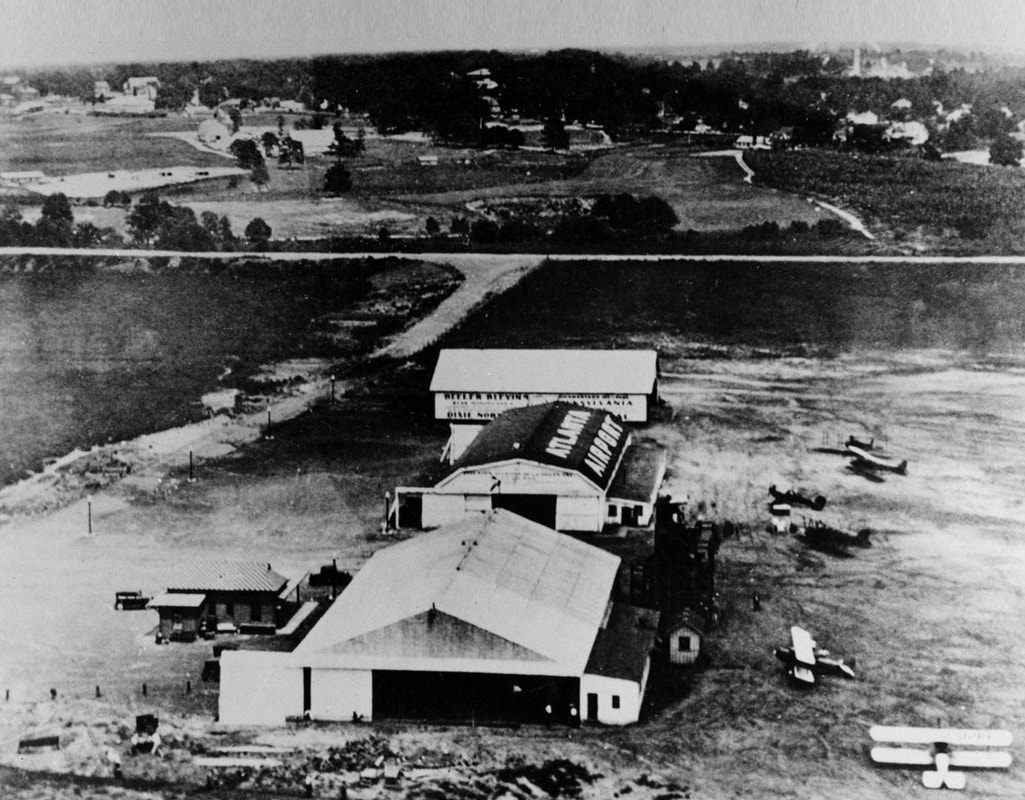 To give you an idea of the location of these buildings, here's a circa 1928 topographic map of Candler Field matched up with a current map and aerial photo from Google Maps. The three buildings in the photo above appear near the center of the map. Click the thumbnails or arrows to toggle between images. The topo map is part of Jack Kittle's amazing Atlanta Street Map Overlay.
Pitcairn Aviation inaugurated air mail service between Atlanta and New York on May 1, 1928. The trip took approximately 14 hours in each direction. 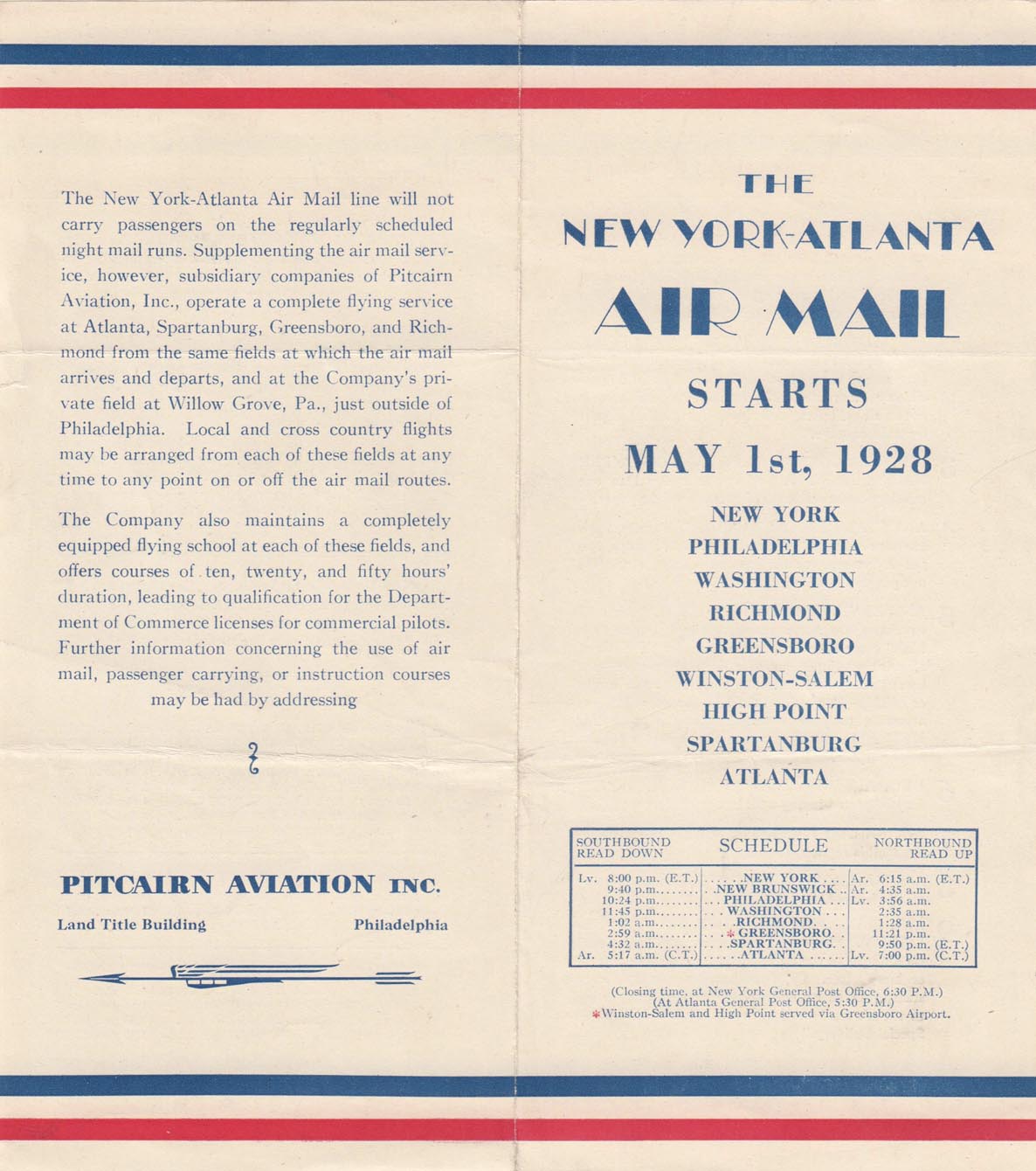 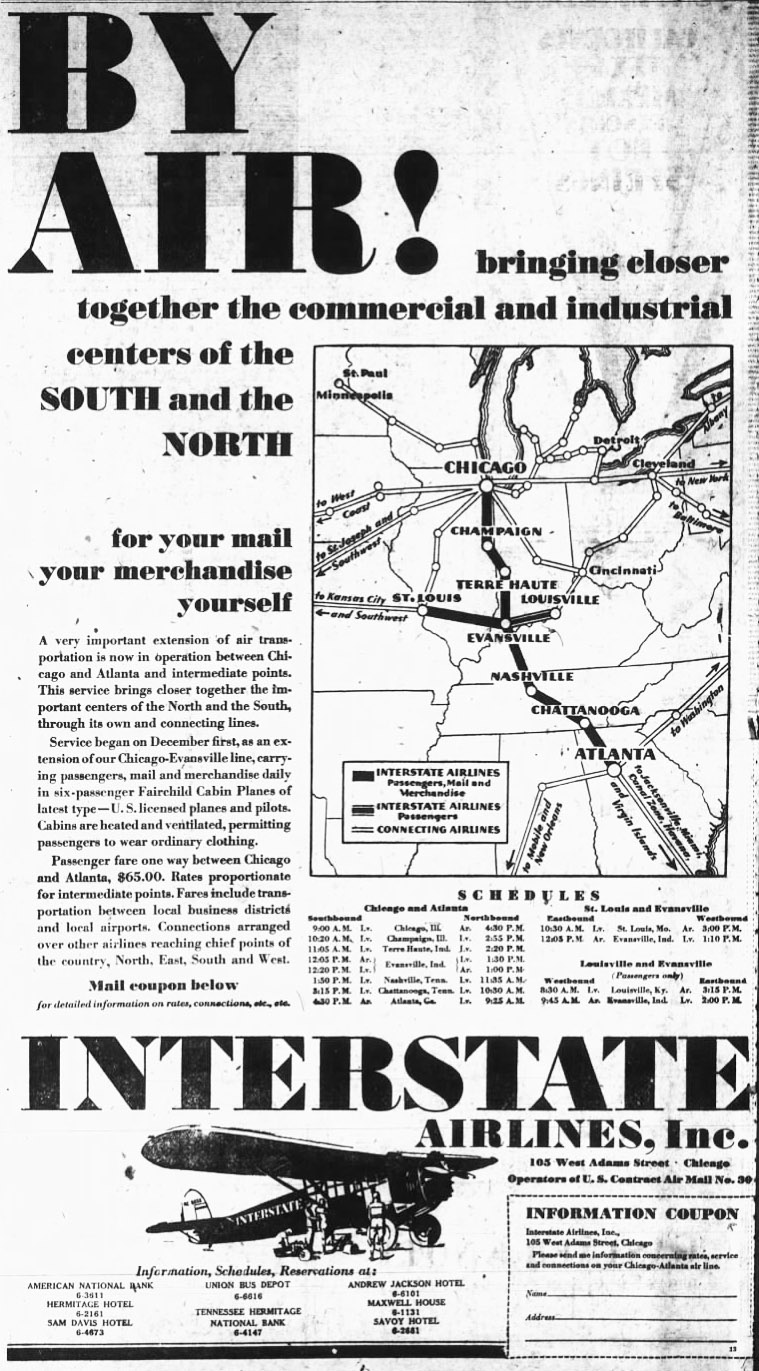 A classic view of the airport circa 1928 showing the Pitcairn hangar (with Atlanta Airport painted on the roof) and the Beeler Blevins hangar. In the foreground is one of Mr. Blevins' prized possessions, a Ryan monoplane similar to Lindbergh's "Spirit of St. Louis". The two biplanes at right are J-1 Standards, World War I training planes that looked almost identical to the famed JN-4 and JN-6 Jennys but distinguished by a large, unsightly radiator that extended from the engine to the upper wing. An interesting article on these aircraft can be found at GeneralAviationNews. 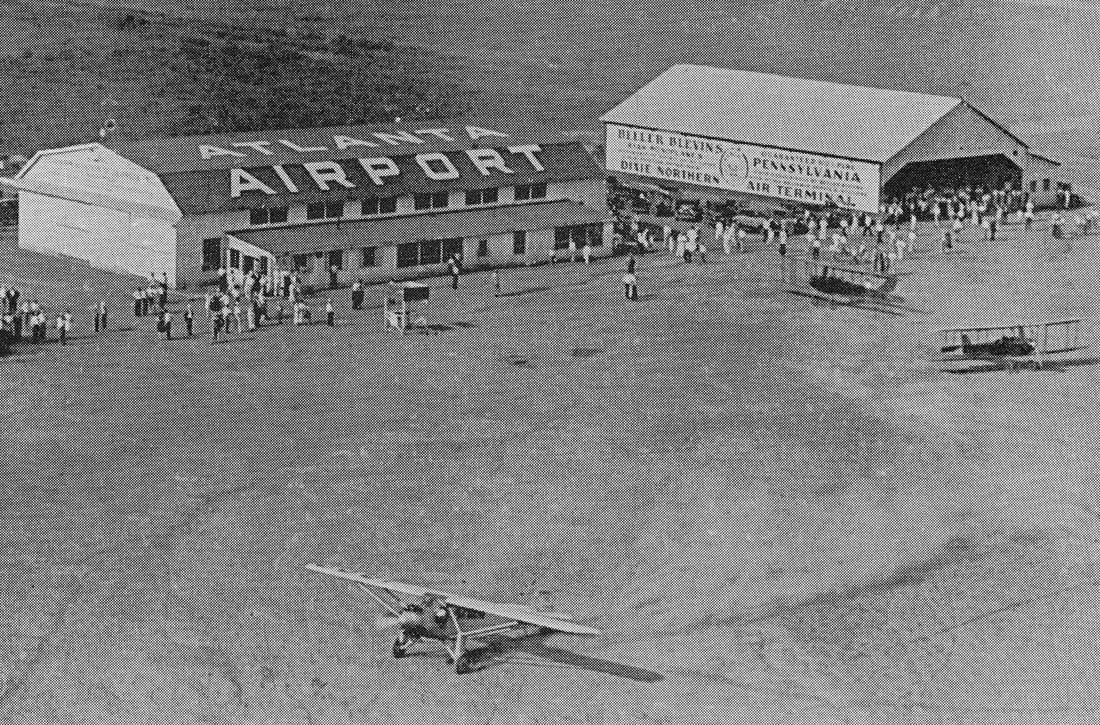 A 1929 view of the airport showing T.A.T. Flying Service in the former Doug Davis hangar, Pitcairn Aviation, and the Beeler Blevins hangar. T.A.T. was a predecessor of American Airlines and Doug Davis was the local manager at the time. Atlanta airport was rated poorly among pilots due to the gulleys and washed out areas that can be seen in this view. The Atlanta Constitution declared, "Candler Field is a bane in the existence of all pilots who must visit the field. Dangerous to life and ship, the field is feared by the men who take-off from and land upon its surface. Broken wing tips, shattered propellers and smashed landing gears all are resulting almost every week." 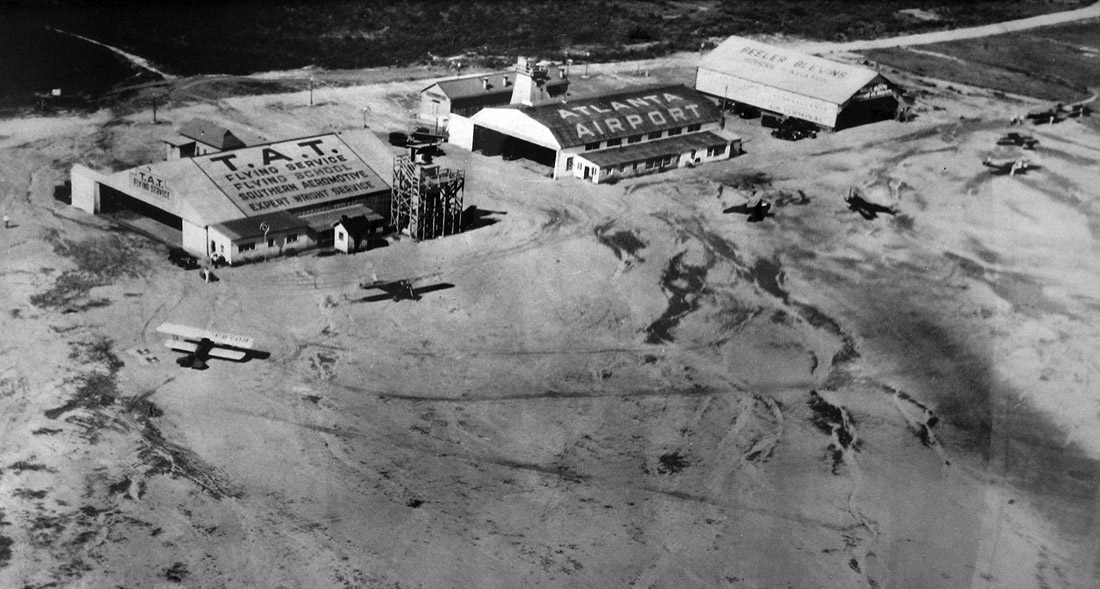 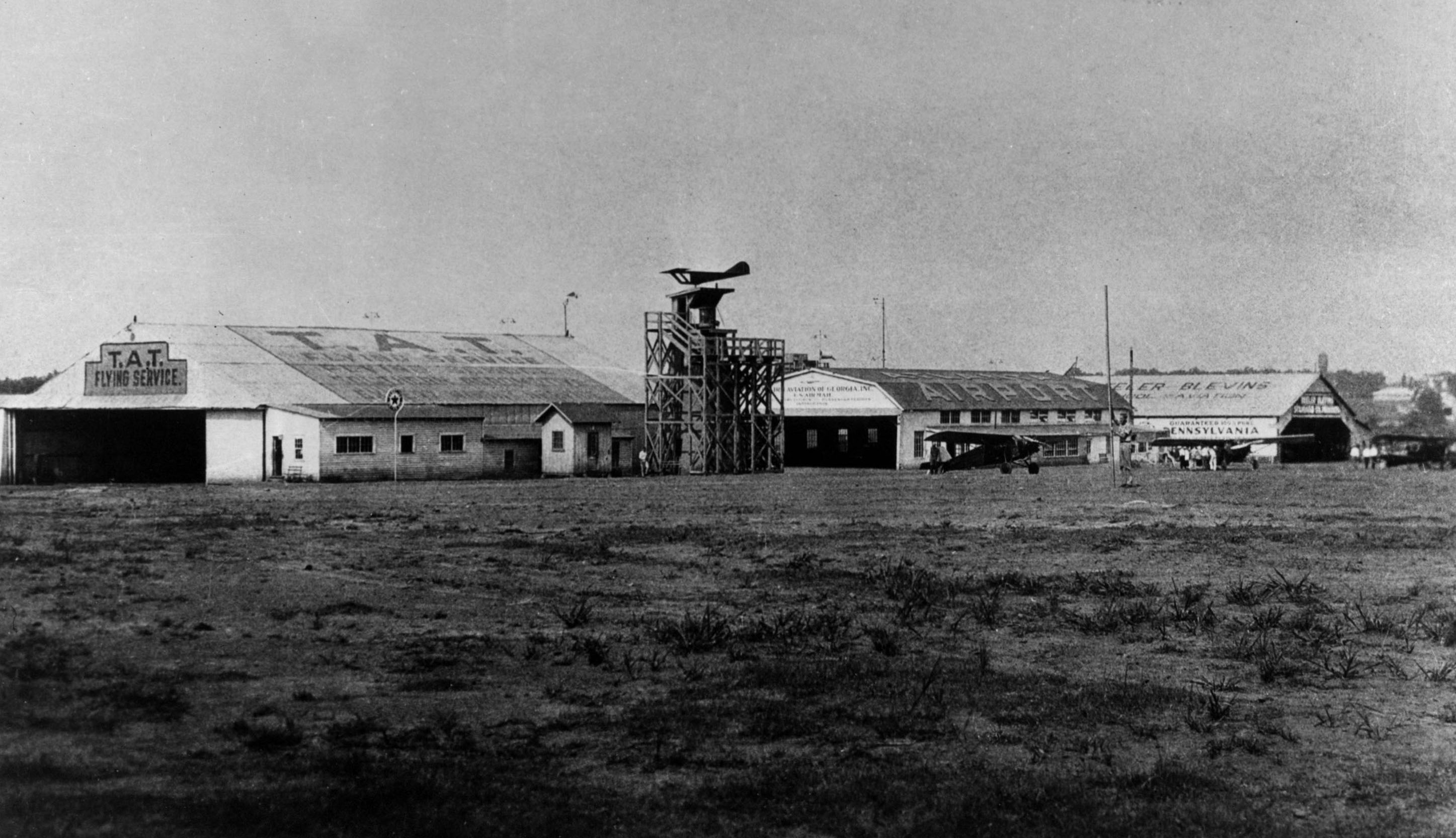 The city of Atlanta purchased Candler Field for $94,500 (roughly $1.4 million in 2020 dollars) on April 6, 1929. Within two weeks, the city began a $240,000 development program at the field which included extension of the existing runway, construction of a new 3,800 foot northwest / southeast runway, paving of the apron in front of the buildings and additional grading. "It will mean much more to Atlanta in the future than we can realize at the time," remarked city councilman Ellis Barrett.