The ticket lobby and waiting room at Columbus on August 3, 1981, showing the counters of Delta Air Lines and Atlantic Southeast Airlines. 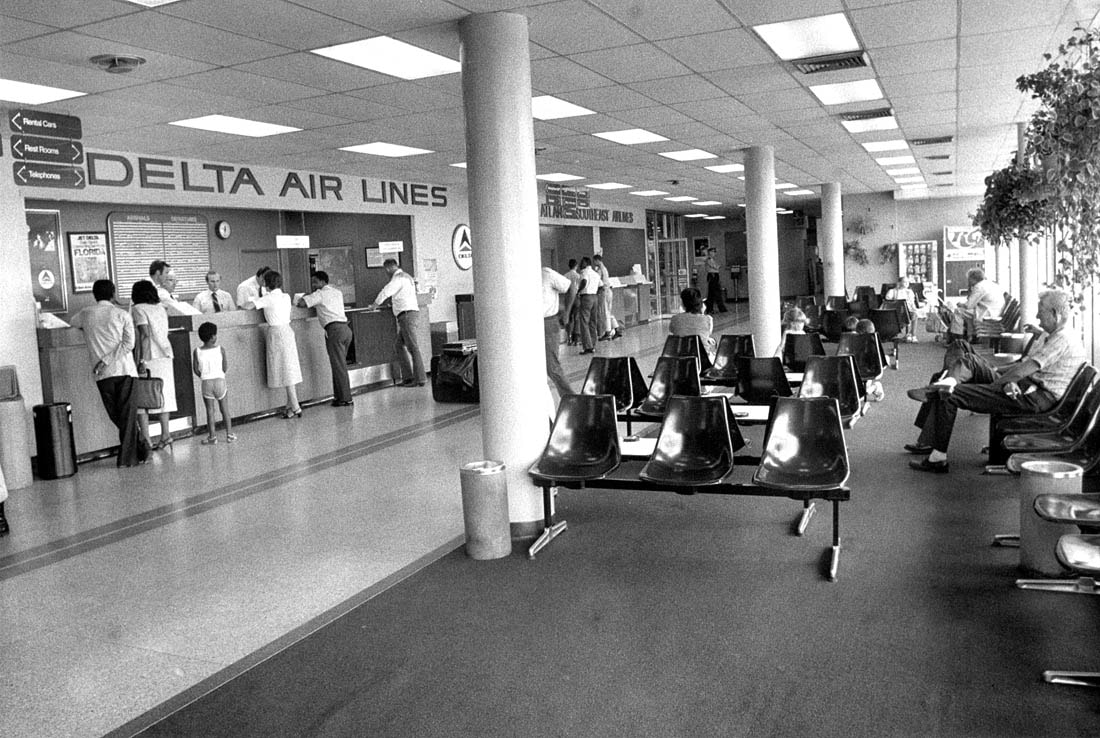 Atlanta Express Airlines tried to take advantage of the departure of Eastern and Southern and began flying to Columbus in early 1982 but found it impossible to compete against Delta's jets and ASA's high frequencies and low overhead. 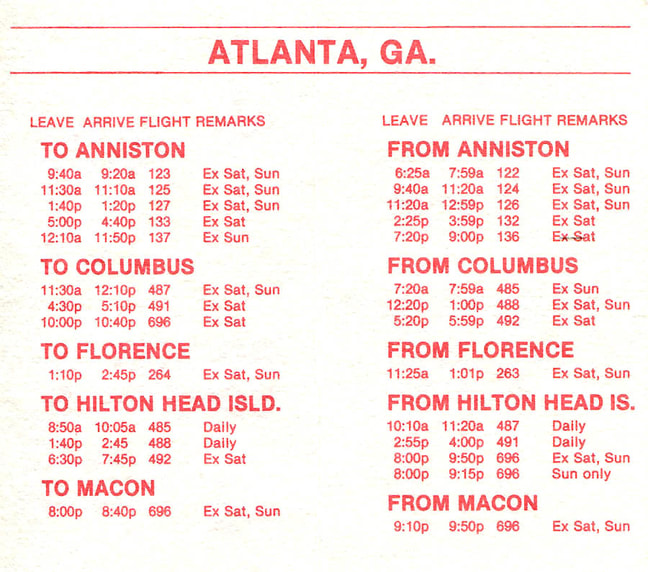 The mid 1980s saw the rise of code-share affiliations between major airlines and commuters. ASA became a Delta Connection carrier in 1984 and augmented Delta's schedules at Columbus. Eastern Air Lines countered by creating Eastern Metro Express, which offered commuter flights to many of the same cities the airline had dropped since deregulation, including Columbus. This Eastern Metro Express route map shows service to Columbus beginning on June 1, 1985.
By the late 1980s, plans were underway for the construction of a modern new passenger terminal to replace the aging building that had served the airport for decades. Although expanded over the years, the earliest sections of this terminal were built in the 1940s. The tail of a Delta DC-9 can be seen in this January 21, 1988 photo. 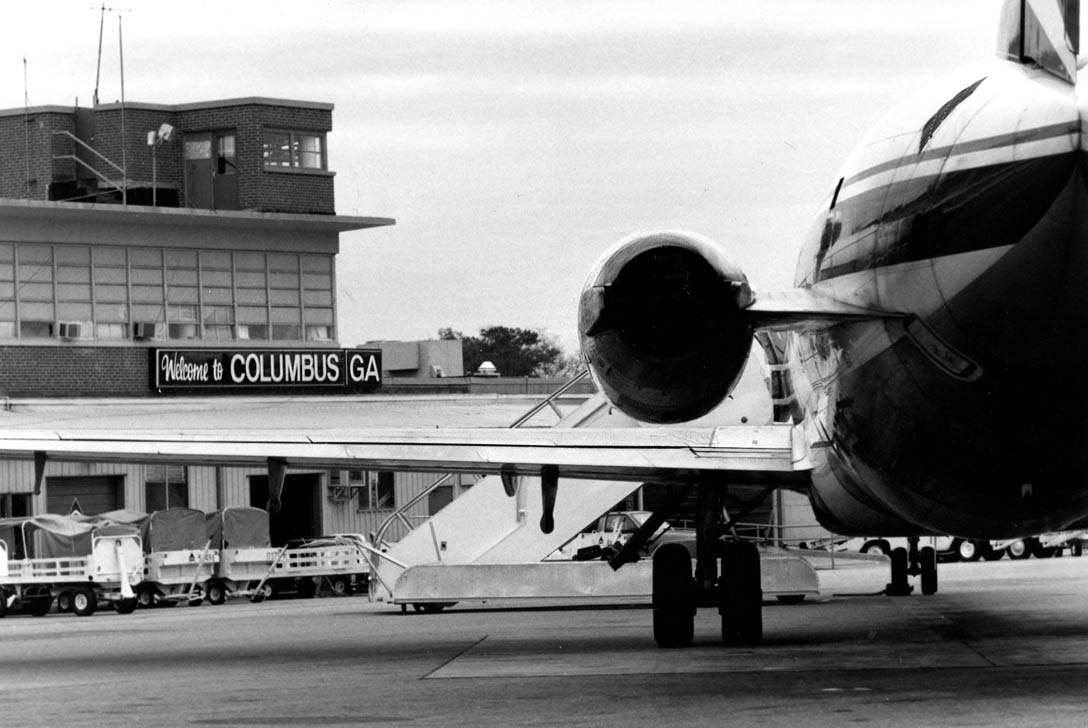 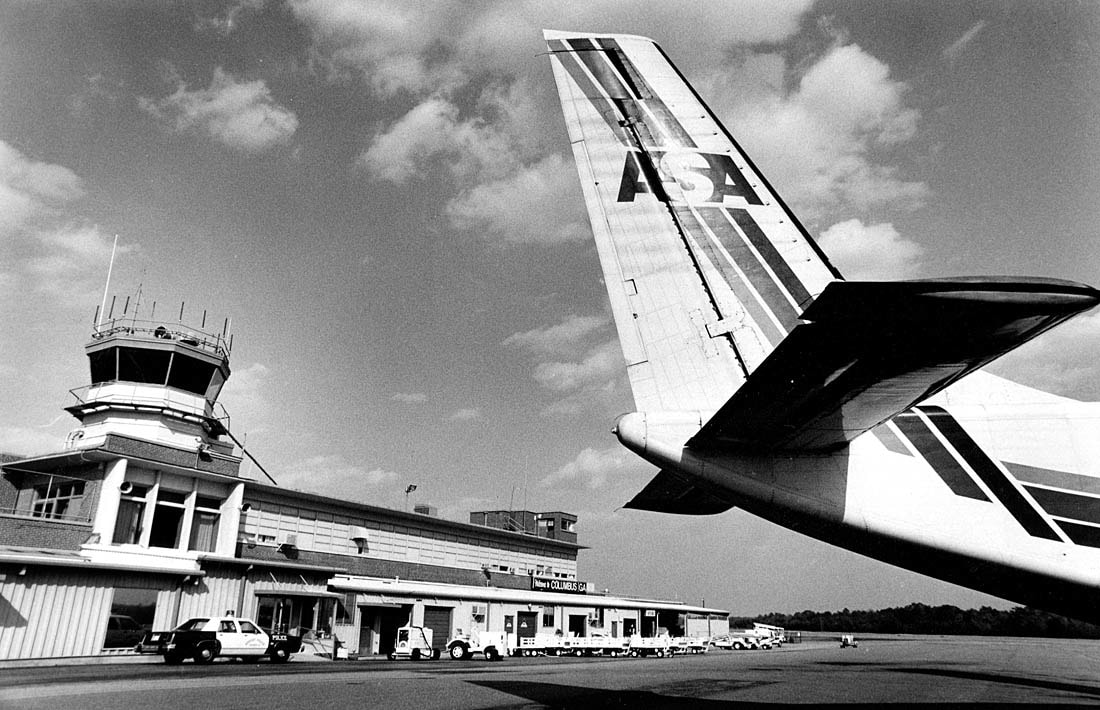 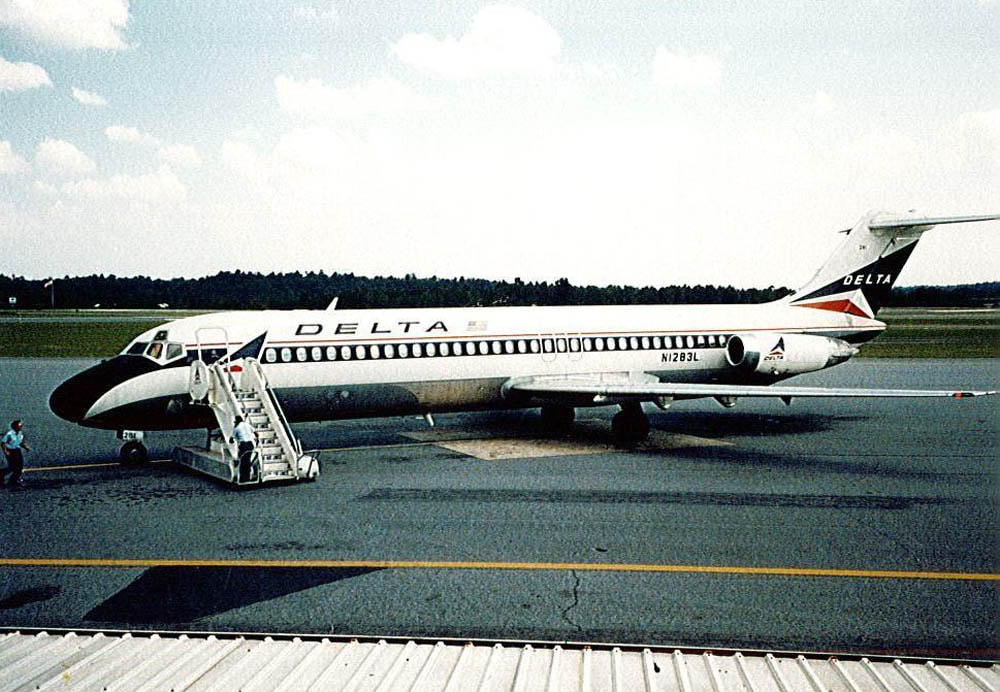 The new two-story terminal opened in 1991 and featured a jetway for Delta flights and parking for six commuter planes. A Delta 737, American Eagle Saab 340 and Northwest Airlink Saab 340 are seen in this circa 1993 photo. The old terminal can be seen at far left. 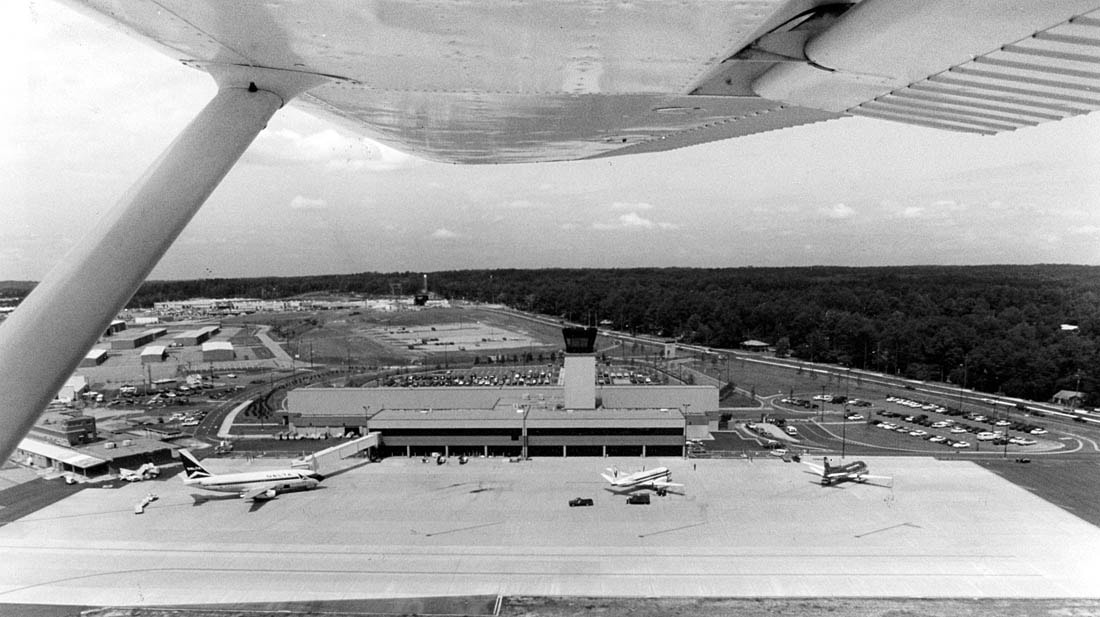 A rainy day in March 1993 finds a Delta 737 and USAir Express Dash 8 on the ramp. The old terminal is behind the 737. Delta was operating 3 flights a day at CSG with a combination of 737s and MD-80s, USAir Express was flying the Dash 8s twice a day to USAir's Charlotte hub via Montgomery, AL. 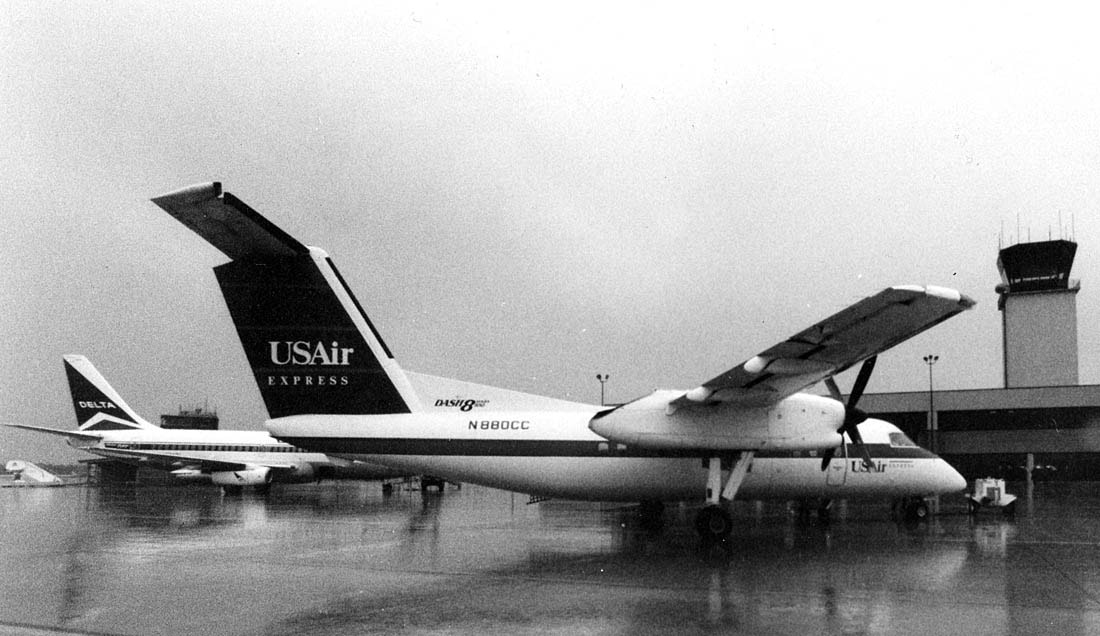 The Official Airline Guide effective November 15, 1994 shows the following routes to and from Columbus. Basically, there were four major airlines trying to funnel traffic into their respective southeast hubs: Northwest Airlink (Saab 340) nonstop to Memphis and and direct to Memphis via Montgomery, American Eagle (Saab 340 and Jetstream 31) to Nashville, Delta (737 and MD-80) and Delta Connection/ASA (Embraer Brasilia) to Atlanta and USAir Express (Dash 8 and Jetstream 31) to Charlotte and Montgomery. Map generated by the Great Circle Mapper copyright Karl L. Swartz.

Five airlines proved to be too many at CSG. The pie had been divided too many ways and resulted in too many empty seats. American Eagle was the first to retreat, ending six years of service in October 1995, citing low traffic volume.

More significantly, 5 decades of major airline service to Columbus ended in December 1995 when Delta discontinued mainline flights to the city, replacing them with Delta Connection affiliate Atlantic Southeast Airlines commuter aircraft. ASA had just received their first jets, the 88-passenger BAe 146, but the planes were initially plagued with problems and delays and cancellations were frequent. Traffic dropped considerably following the changeover. 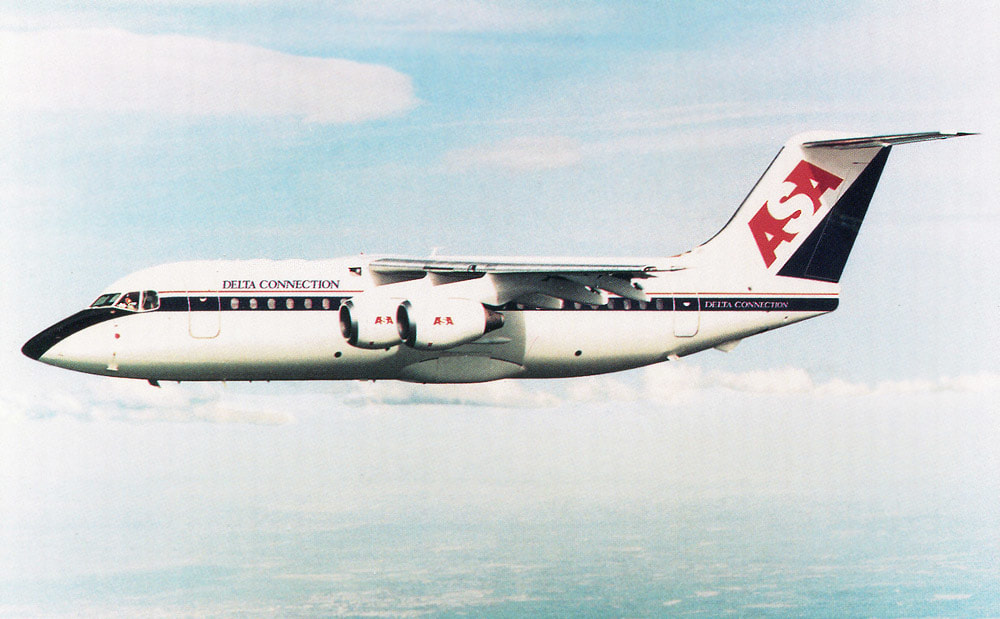 Gulfstream International briefly served Columbus in late 1995 and early 1996 with flights to Atlanta and Birmingham using Beech 99s.
ASA's BAe 146 service was short-lived and the airline soon returned to all turboprop flights at Columbus. The April 2000 OAG shows ASA flying 7 flights a day from Atlanta with ATR-72s and Embraer Brasilias. Northwest Airlink was operating 3 flights a day from Memphis and 2 from Dothan, all with Saab 340s. US Airways Express offered 4 flights a day from Charlotte using Jetstream 31s.
During the 2000s, traffic continued to dwindle at CSG. Northwest Airlink left in 2001 and US Airways pulled out in 2003 leaving Delta Connection as the sole remaining service. American returned in 2010 with two daily regional jet non-stops to their Dallas-Ft. Worth hub but left in 2013, once again blaming low traffic figures. Since that time, Delta Connection has provided the only scheduled flights at Columbus, with non-stops into Delta's ATL hub. Soaring fuel costs, air traffic congestion, delays and long security wait times since 9/11 have made the short flight to ATL increasingly impractical. The Columbus Airport website suggests arriving 90 minutes before your flight, the same amount of time it takes to drive to Hartsfield-Jackson Atlanta International Airport.

Columbus has recently offered financial incentives to bring a second airline to the airport, so far with no success. In the meantime, Delta Connection continues to provide daily jet service to Atlanta. Delta's March 2, 2018 schedule shows 4 CRJ flights a day between CSG and ATL, operated by Endeavor Air.

​CRJ-900ER N691CA is pictured at CSG. Despite its narrow fuselage and relatively small size, it actually seats more than the DC-9-14s flown by Eastern and Delta in the 1960s and 70s. Photo from the Columbus Airport website. 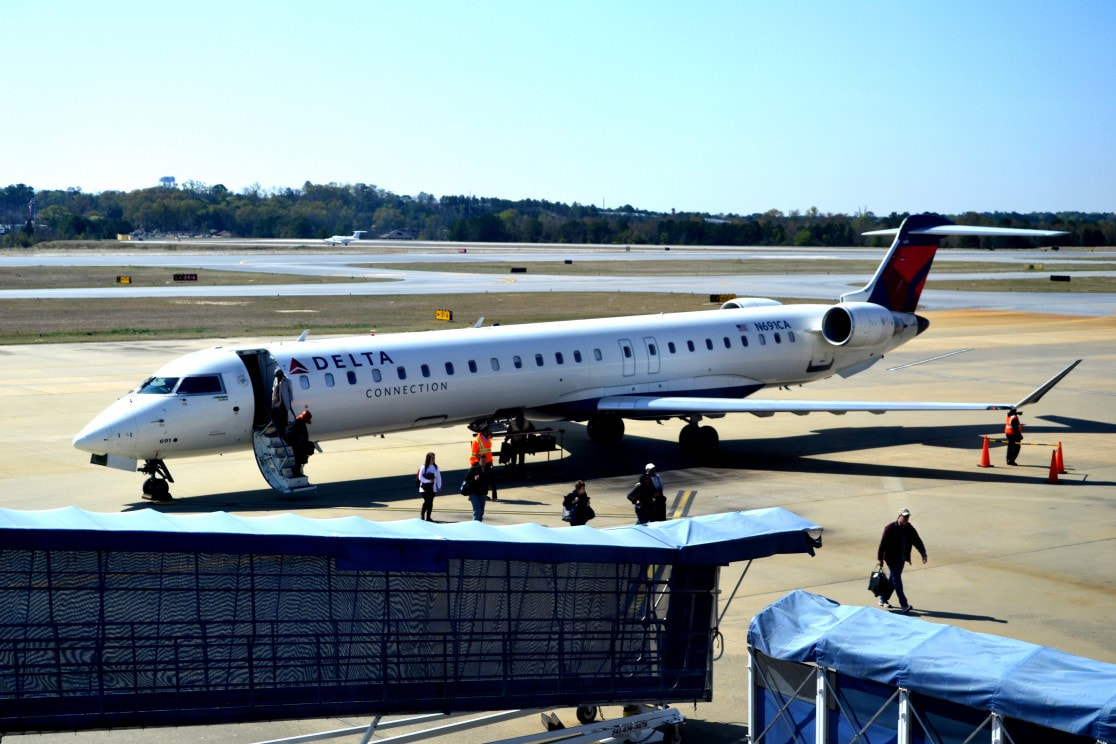 Columbus Airport is now the 4th busiest commercial airport in Georgia in terms of passengers, following Atlanta, Savannah and Augusta. From March 2019 to February 2020, 100,750 passengers used the airport.