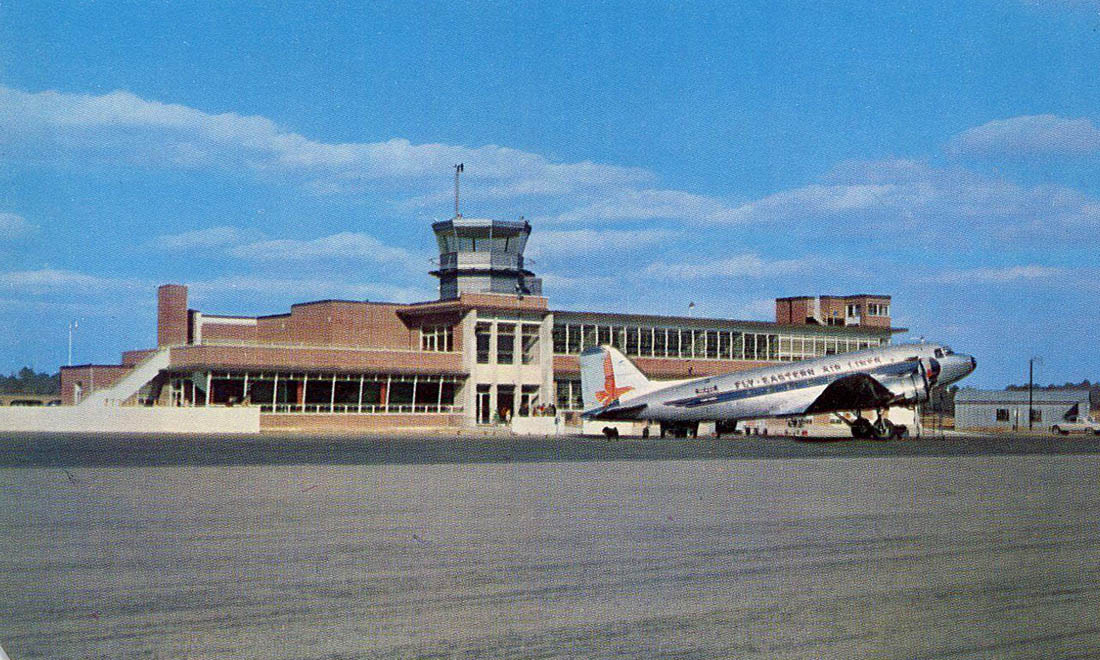 Early 1950s postcard view of an Eastern Air Lines DC-3 at Columbus, GA.
Air service at Columbus, Georgia dates back to June 1929 when Southern Air Express began tri-weekly flights along an Atlanta - Columbus - Montgomery route. These flights used the original Columbus Municipal Airport that was located south of the city along Victory Drive. 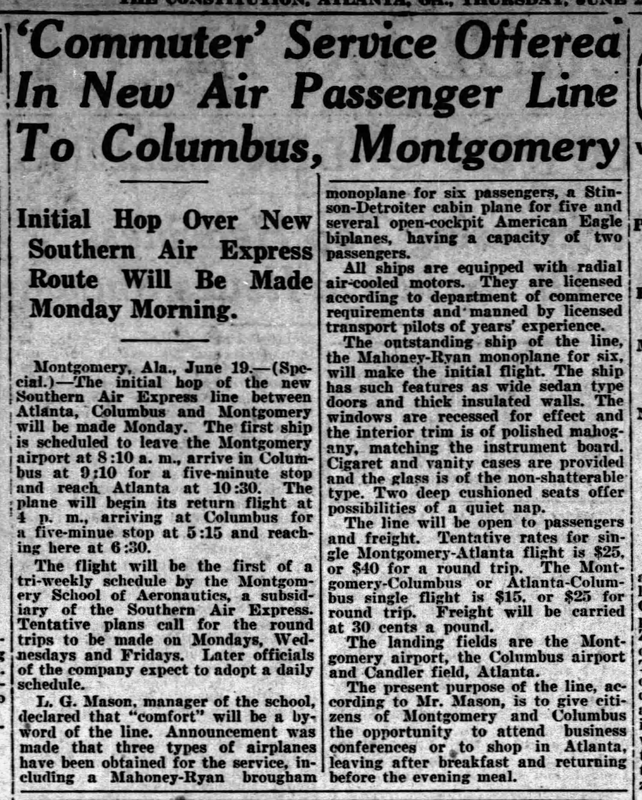 Eastern Air Lines inaugurated passenger service at Columbus, GA on August 1, 1944 as a stop between Atlanta and Montgomery, Alabama using Columbus Muscogee County Airport, now known simply as Columbus Airport. These short flights were segments of a multi-stop New York to New Orleans route flown once daily in each direction. Below: A highlighted excerpt from Eastern's 1944 Annual Report announcing the new service.

Nearly three years later, on July 1, 1947, Delta added Columbus as a stop along a new alternate route between Atlanta and Fort Worth. This article appeared in the July 2, 1947 Atlanta Constitution.

Columbus gained a third airline on June 25, 1949 when Southern Airways started multi-stop service between Atlanta and Jacksonville. The airline would also add an Atlanta - Charleston route via Columbus later in the year. The trio of Southern, Delta and Eastern dominated airline service at Columbus through the late 1970s. Timetable from the Craig Morris collection via timetableimages.com.
This aerial photo circa 1949 shows the airport with essentially the same basic X shape layout that still exists today with the passenger terminal located north of the intersection of runways 5/23 and 12/30. Photo from the Digital Library of Georgia. 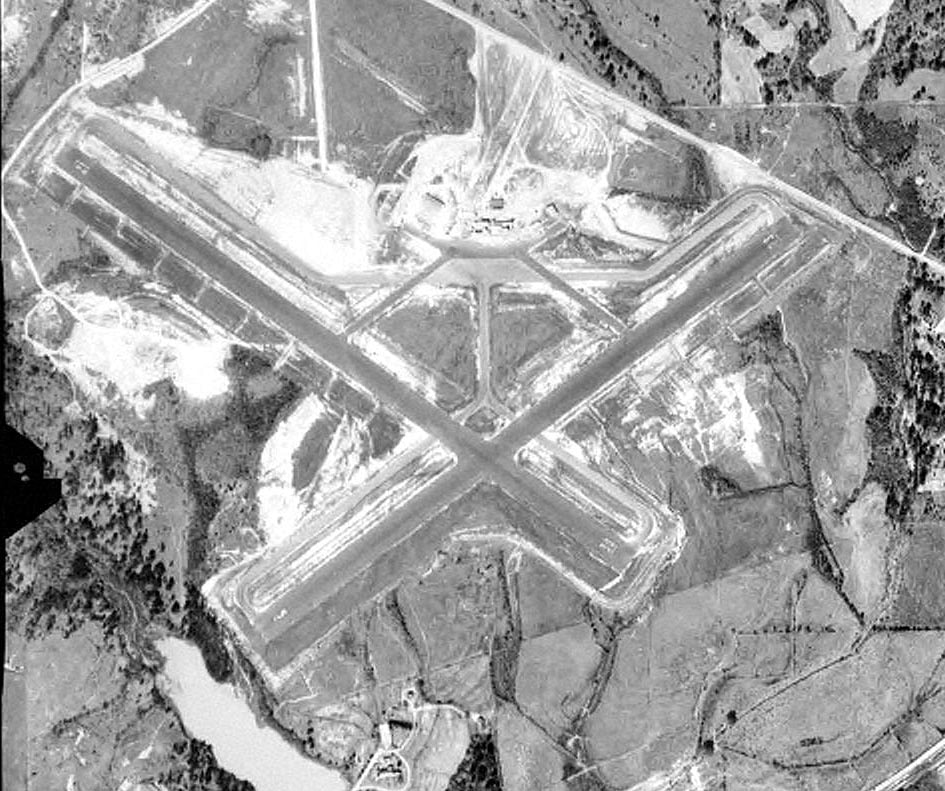 Early 1950s view of a Delta DC-3 on the ramp at the newly constructed passenger terminal. Press photos from the Columbus Ledger Enquirer archives show the terminal under construction during 1949. 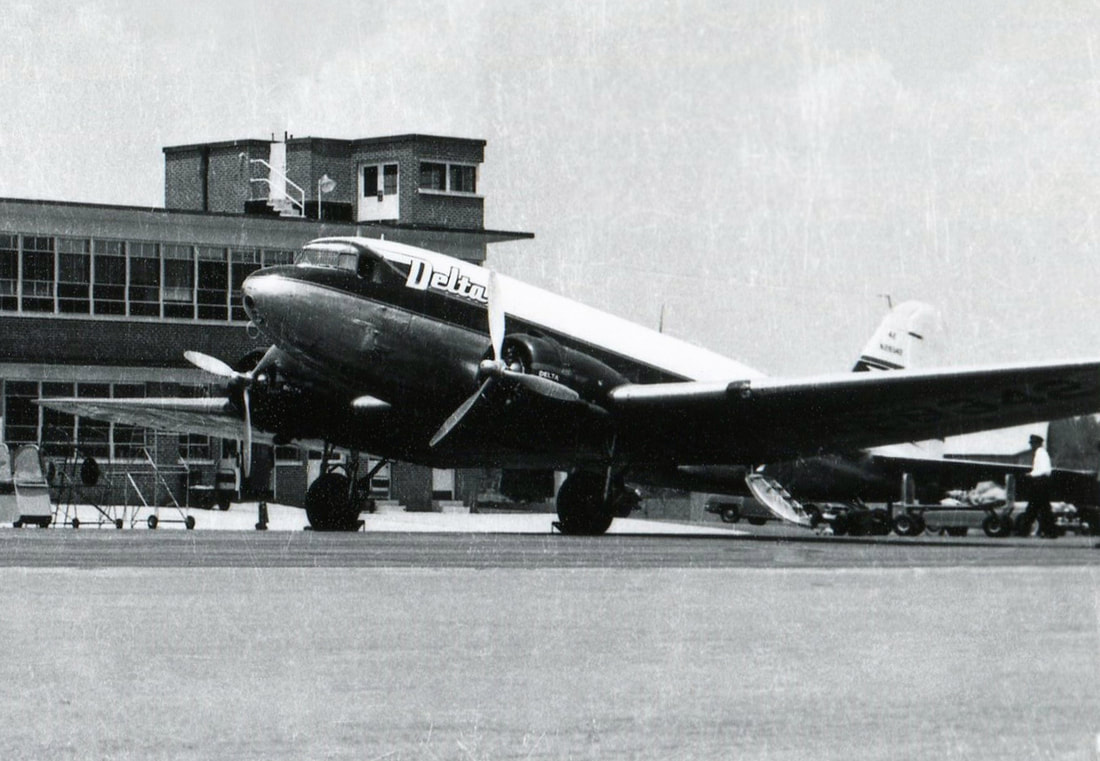 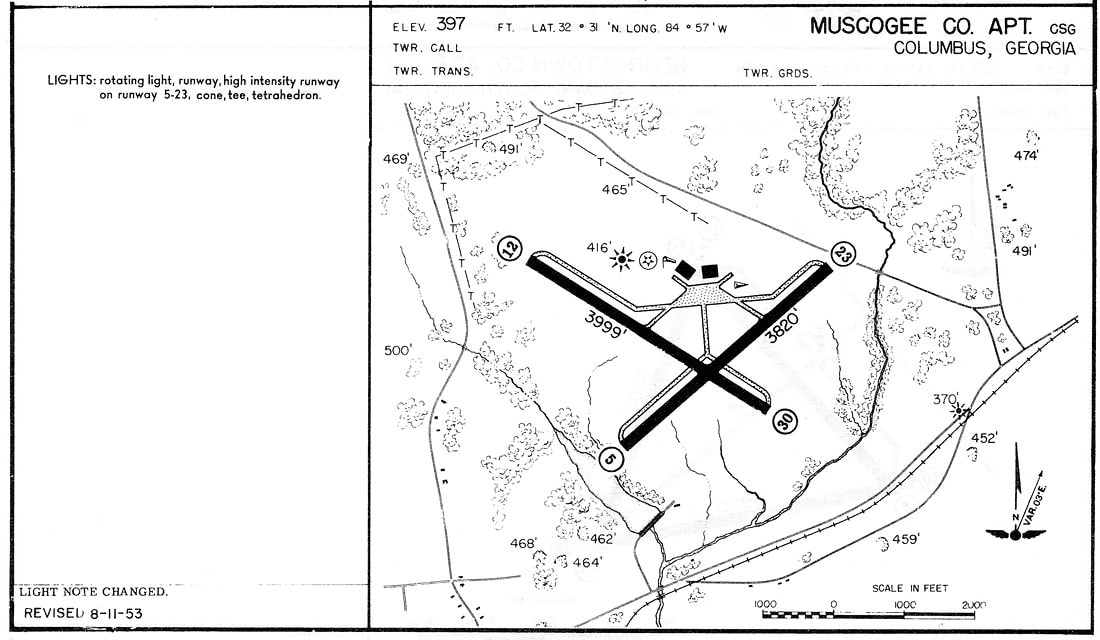 Mid-South Airways briefly operated commuter service to Columbus in 1960 with a daily round trip to Augusta, GA via Macon and Americus. Timetable courtesy of Don Henchel.

A detail of a 1961 Airline Map of the United States courtesy of the David Rumsey Map Collection shows Columbus as a stop along numerous "milk runs" between larger cities. Trunk airlines Eastern and Delta are shown in red and local service airline Southern is in green.

A December 8, 1968 aerial view of CSG shows construction of the extension of runway 5/23.

A close up of the terminal from the same December 8, 1968 photo shows a pair of Convair 340/440s on the ramp. An educated guess is that the plane at left is an Eastern 440 and the plane at right with the darkly painted engines is a Delta 440. 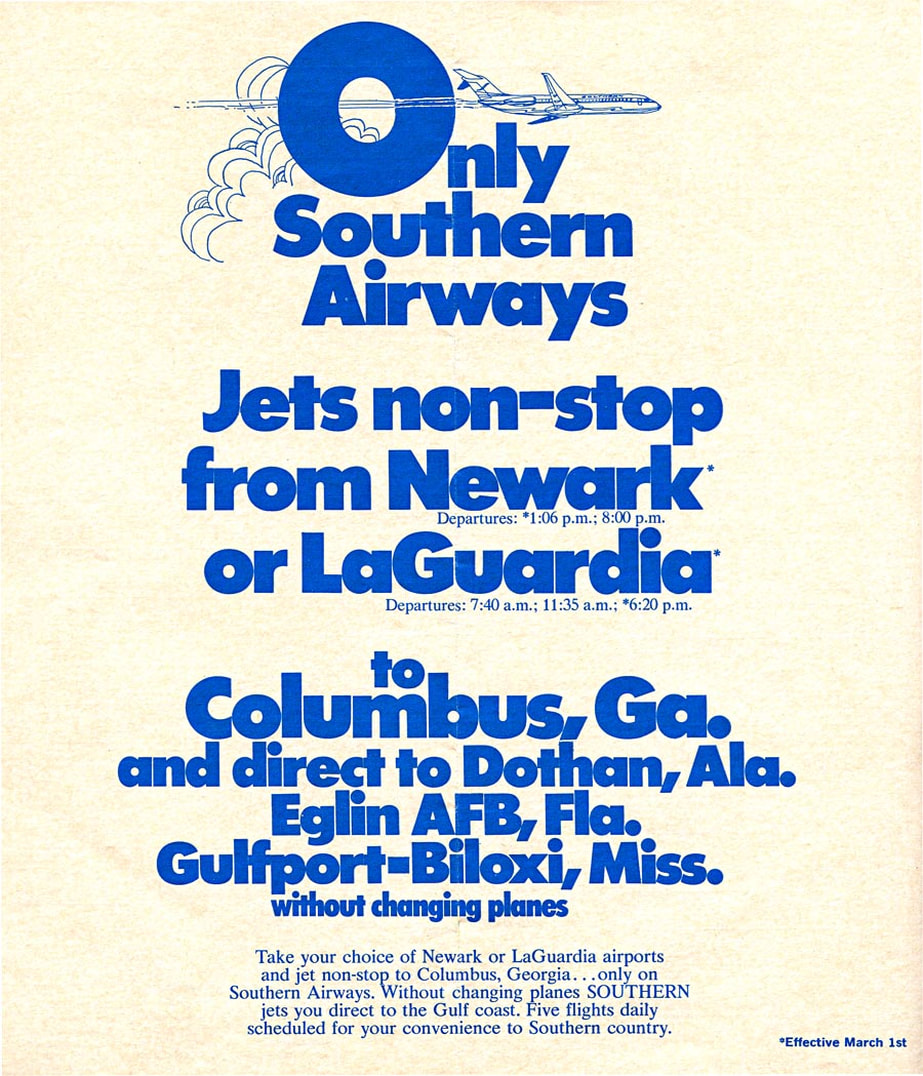 The October 15, 1971 Official Airline Guide shows 27 daily or near-daily arrivals at Columbus with all but 5 being flown with DC-9s. 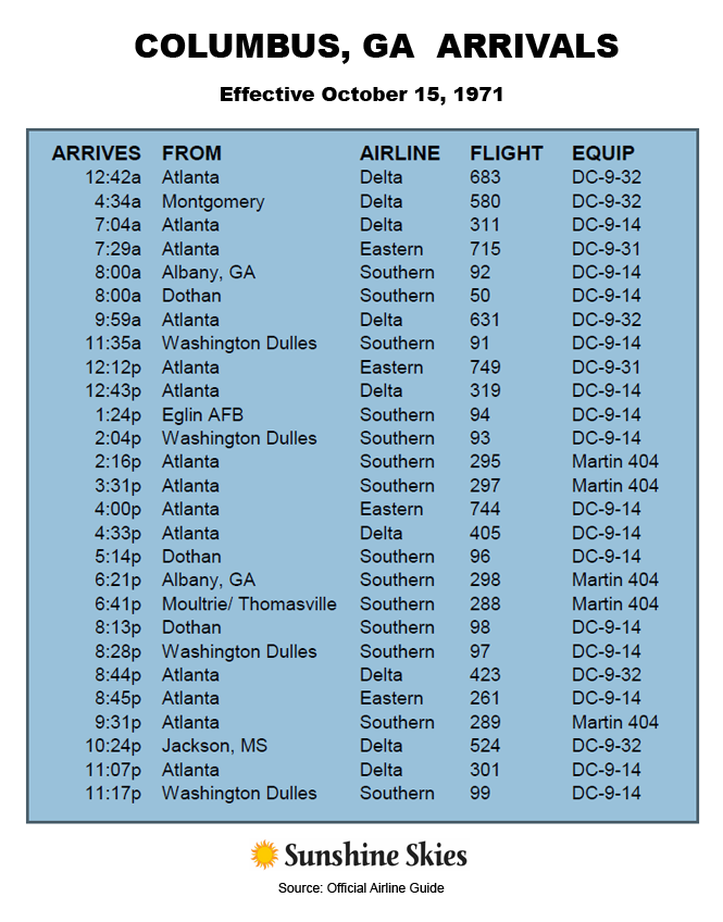 A Southern Airways DC-9 taxis to the terminal on January 7, 1972

Photo of Roy P. Saffold, the first passenger to fly out of Columbus when Eastern initiated service on August 1, 1944. He was 15 at the time. This was taken on the 30th anniversary of that flight.

A wonderful view of a Delta DC-9-32 at Columbus Metropolitan in 1975. Photo from the collection of Alan.

It was often standing room only during the midday rush in the 1970s as the old terminal was regularly packed with soldiers from nearby Ft. Benning as seen in this September 23, 1976 photo.

Delta Air Lines city timetable effective April 24, 1977 shows a total of nine daily departures from Columbus: five to Atlanta, one to Baton Rouge, one to Monroe, LA with continuing service to Dallas/Ft. Worth, and two to Montgomery. All flights were operated with Douglas DC-9-32s.

Following the passage of airline deregulation in 1978, major airlines began to cut short haul service to small and medium size cities in favor of more profitable routes. Southern Airways left Columbus in April 1979, nearly 30 years since their first DC-3 made its inaugural flight. Eastern's May 1, 1979 timetable shows service to Columbus reduced to only a single flight a day. Their final Columbus flight departed on May 30, 1979.

Anticipating that is was only a matter of time before Columbus and other cities across the south would soon be facing drastic reductions or complete elimination of air service, three Southern Airways executives formed Atlantic Southeast Airlines. On June 27, 1979, ASA's very first revenue flight, a Twin Otter from Columbus to Atlanta, took to the sky.

ASA's Twin Otter being loaded for the airline's first flight to Atlanta.

ASA's service was an immediate success. Their September 15, 1979 timetable shows six daily or near-daily round trips between Columbus and Atlanta.

Air South began flying between Columbus and Atlanta on September 1, 1979 using ex-Southern Airways Martin 404s, but service soon ended when the airline went out of business in January 1980.

CONTINUE TO PART TWO OF THE HISTORY OF COLUMBUS AIRPORT