THE TEMPORARY TERMINAL CLOSES AND MOVES TO HANGAR ONE

When Atlanta's modern "Jet Age" terminal opened on May 3, 1961, the old "Temporary Terminal", which served the city for thirteen years, was largely forgotten by the traveling public. Within months it was gone and many passengers may have understandably assumed it was demolished and thought nothing more of it. While the meandering concourses were indeed demolished almost immediately after closing, the main quonset terminal building was gutted, partially dismantled and relocated a half mile southwest to the new Hangar One general aviation complex where it remained for another two decades. This second life was part of the original intent during the design and construction of the terminal. The Atlanta Constitution reported on January 26, 1947, more than a year before the Temporary Terminal opened, "The new building, to be built of brick and steel, will be converted to use as a utility hangar upon completion of the new Administration Building some time in the future." True to this vision, the building was moved on August 1, 1961.
This is the ticket counter of the closed temporary terminal in the pre-dawn hours of May 3, 1961, the day the new "Jet Age" terminal opened to the public. 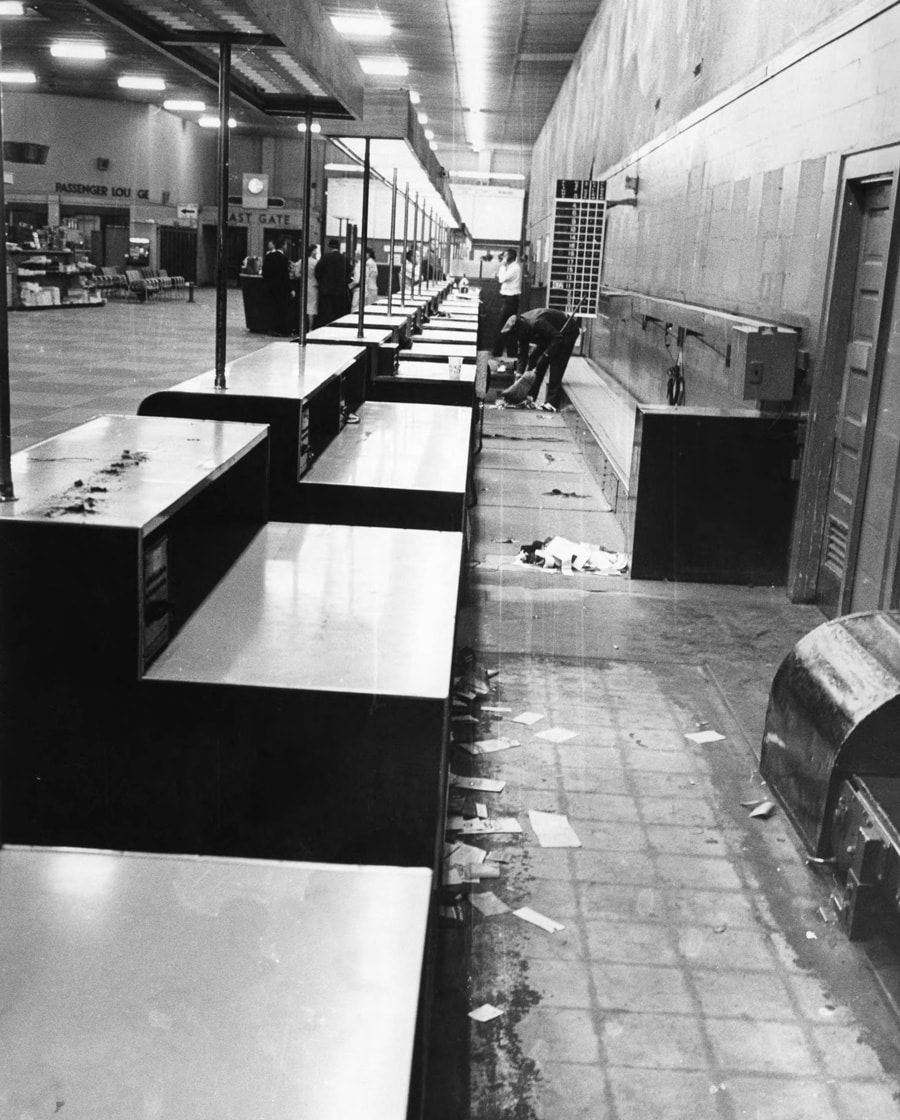 The new terminal as seen from the closed temporary terminal on May 3, 1961. 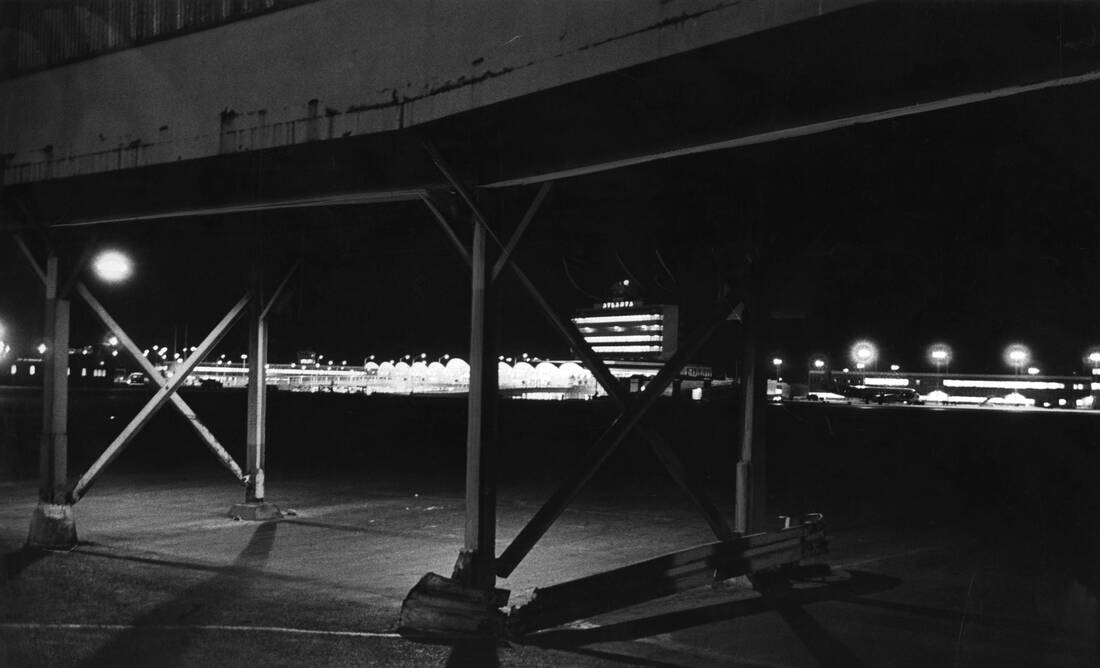 In this photo, the relocation is well underway and the terminal is halfway across the old aircraft ramp, heading for the taxiways that will lead to the Hangar One complex. The original terminal site can be seen at the upper right. The steel framing in the foreground is the construction for Eastern Air Lines' new concourse A which could not begin until the old facility had been cleared. Photographer: J.C. Lee. Courtesy of the Atlanta Journal-Constitution Photographic Archives. Special Collections and Archives, Georgia State University Library. 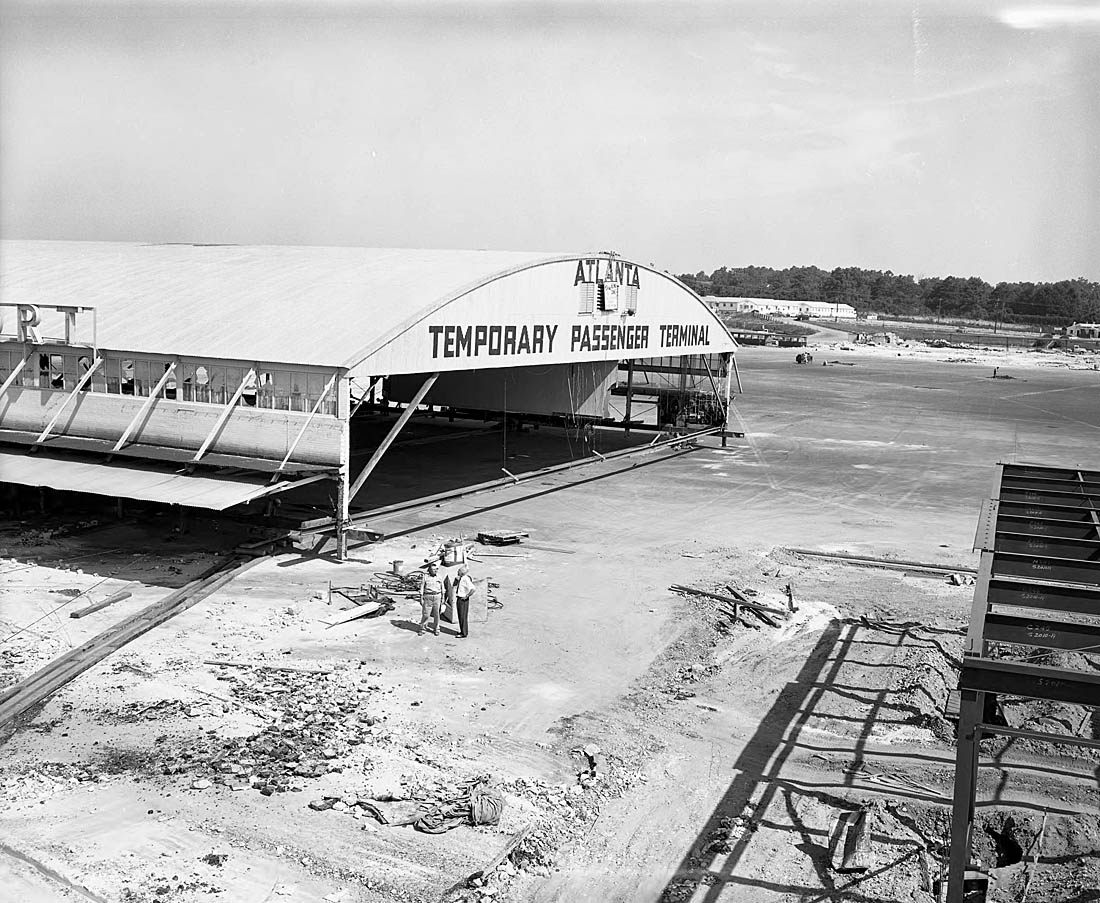 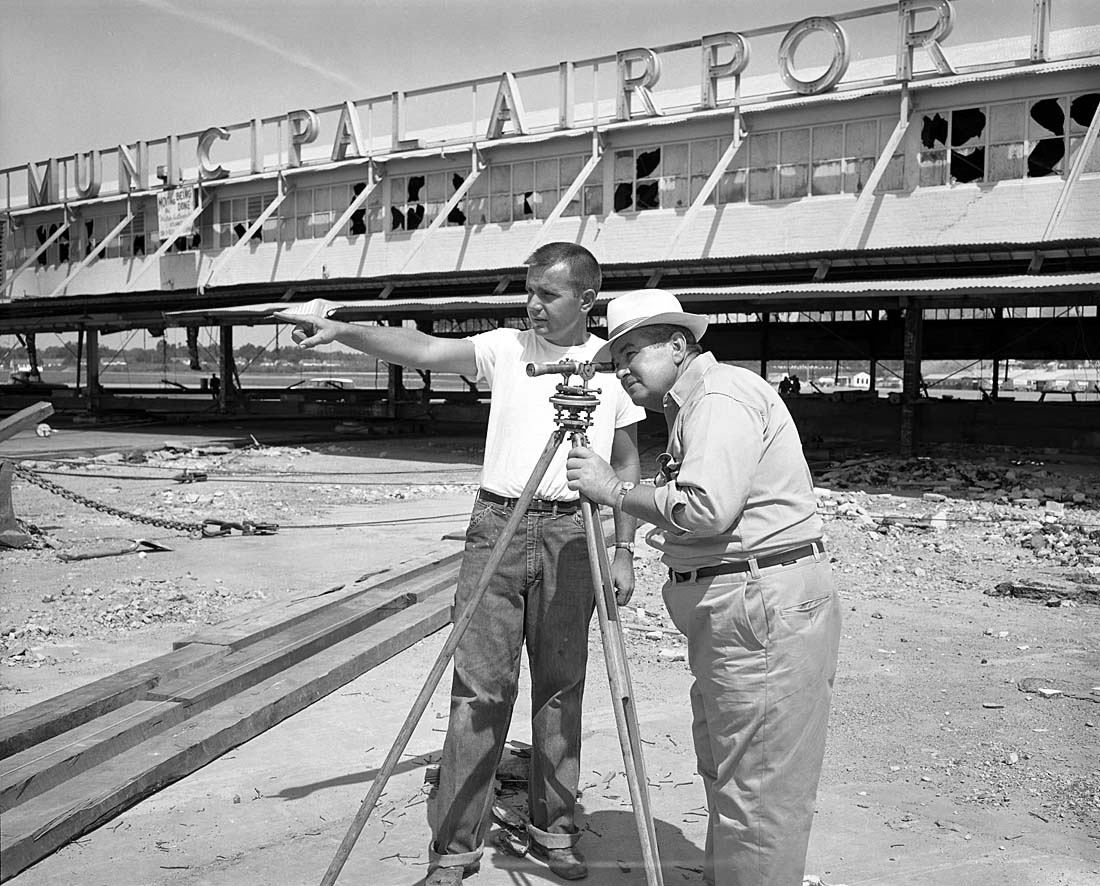 This view from the former parking lot shows the old terminal moved half way across the ramp. The steel framing for the new concourse A can be seen just to the left of the temporary terminal building. Photo credit: Atlanta Journal-Constitution collection. 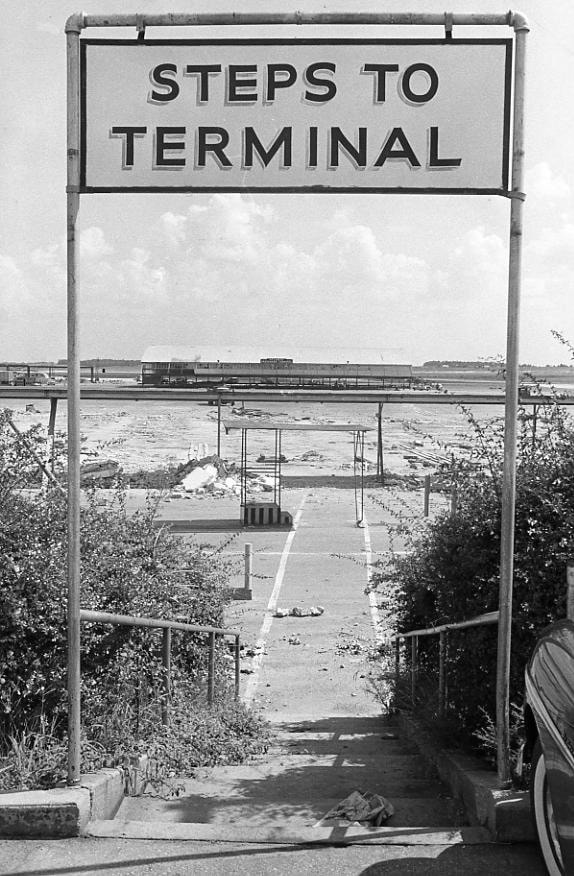 The curbside ruins of the temporary terminal. The 1961 terminal can be seen in the distance at far right. Credit: Atlanta Journal-Constitution collection. 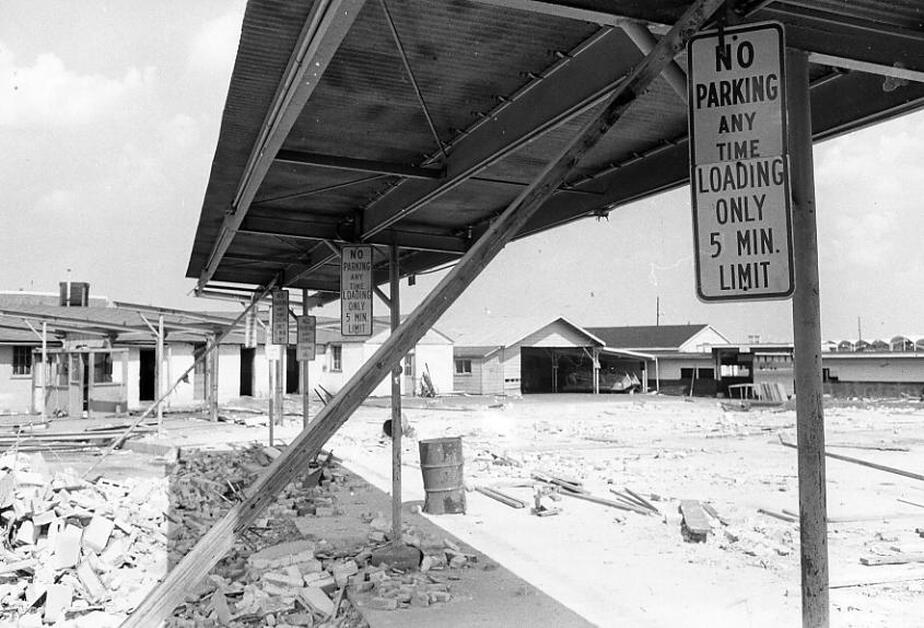 An aerial diagram showing the original location of the Temporary Terminal as a yellow rectangle and its new home at the Hangar One facility. The 1961 terminal is at center, Interstate 85 is at left and Virginia Avenue runs horizontally across the top of the photo. 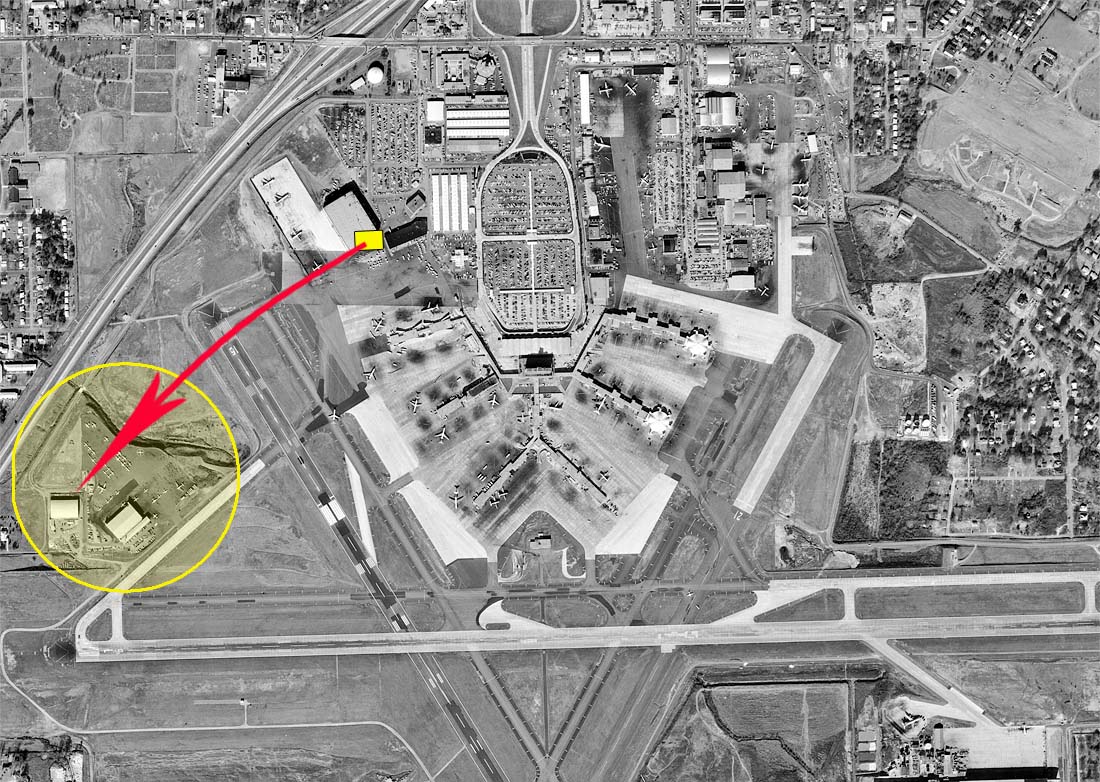 The November 1965 issue of Flying magazine included this ad for the National Aviation Trades Association and Hangar One. This view faces west and shows the Temporary Terminal relegated to the role of a utility building. It still has the ATLANTA title but the other words have been painted over. In the background is I-85 and one of the many College Park neighborhoods that was later demolished to make way for airport expansion. 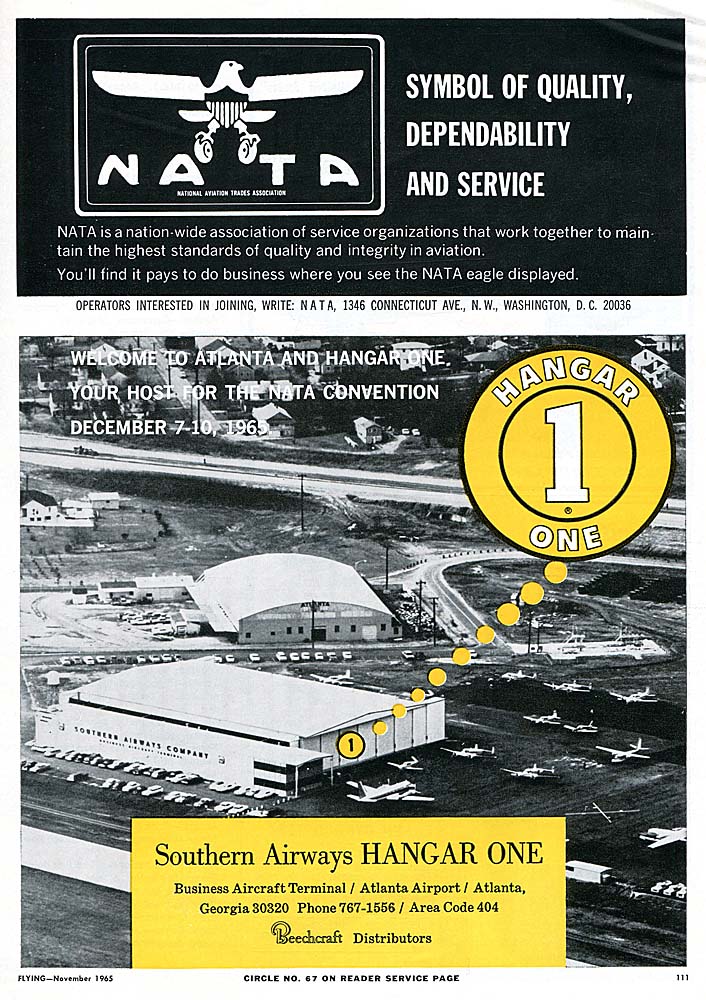 Here's a detail of the above November 1965 advertisement. Southern Airways Company was not affiliated with the airline Southern Airways Inc., a subtle distinction that caused a lot of confusion through the years. The company name was officially changed to Hangar One in 1972. 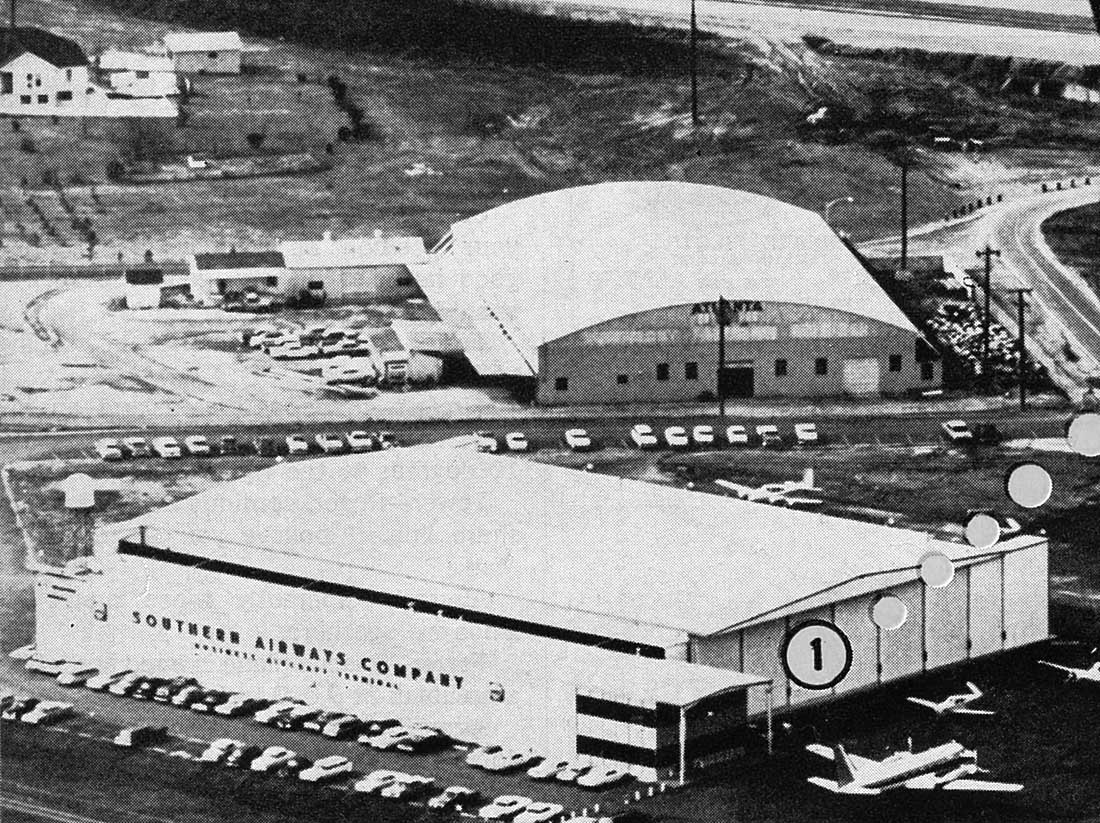 The employees of Hangar One showing off their equipment and modern hangar, May 3, 1967. Lane Brothers Commercial Photographers Photographic Collection, 1920-1976. Georgia State University Library. 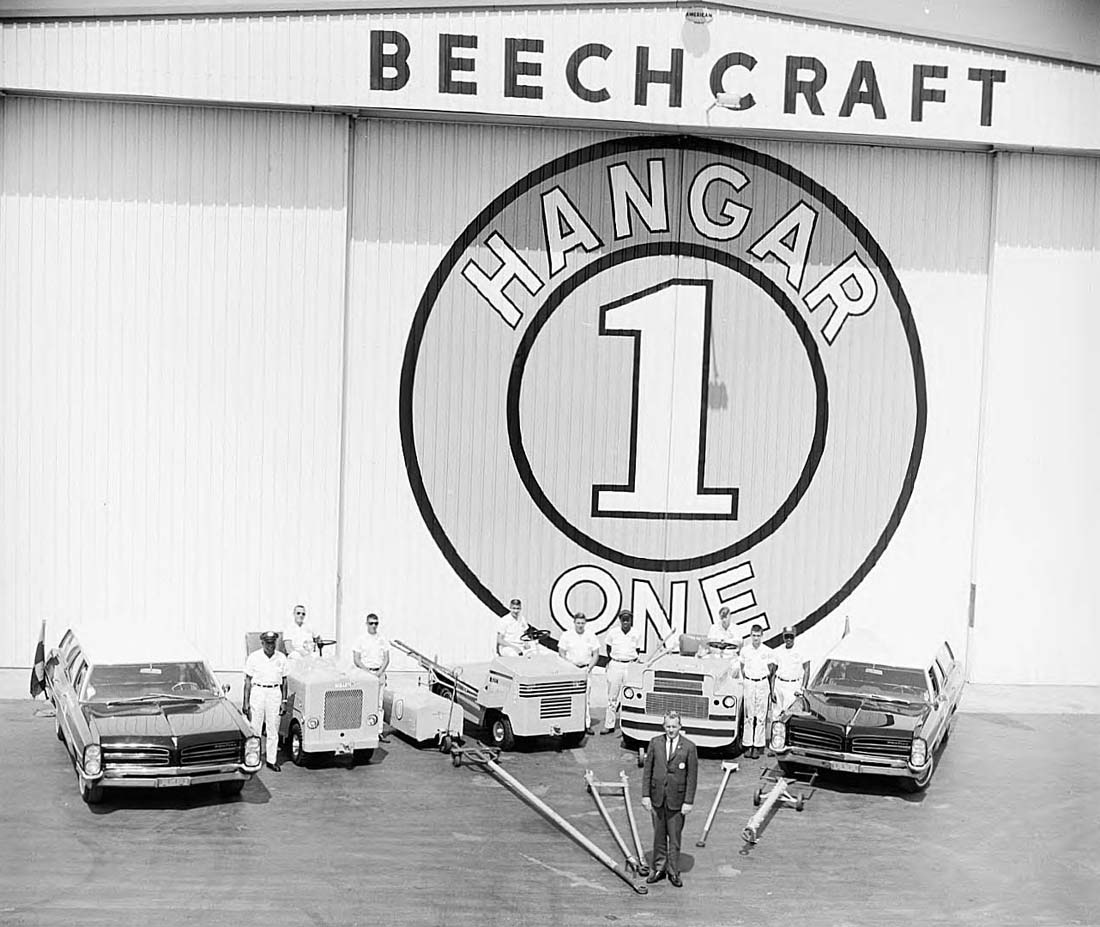 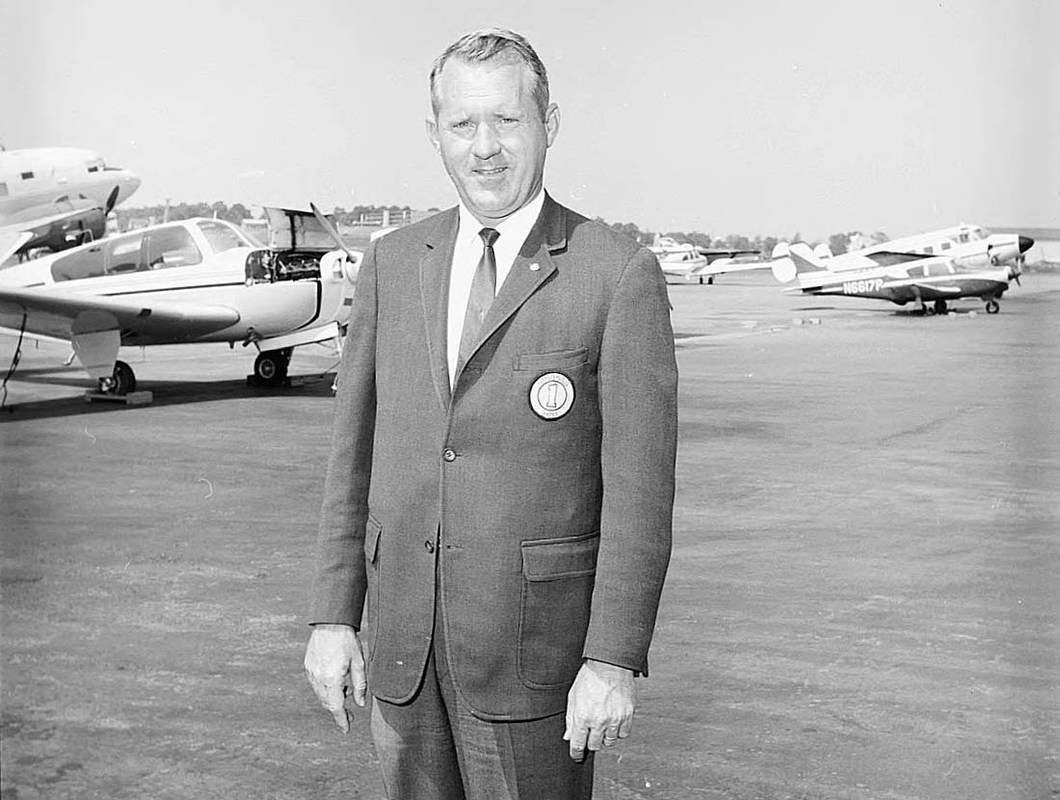 An aerial view of the Hangar One facility from December 6, 1968 showing more than 30 light aircraft, two DC-3s and at least one Lear Jet. The deep ravine bordering the ramp is one of several tributaries that form the headwaters of the Flint River on the airport property. Virtually all of these waterways now run deep below the airport through pipes. Also, note the three adjacent houses that were cut off from the rest of the neighborhood by the construction of I-85. 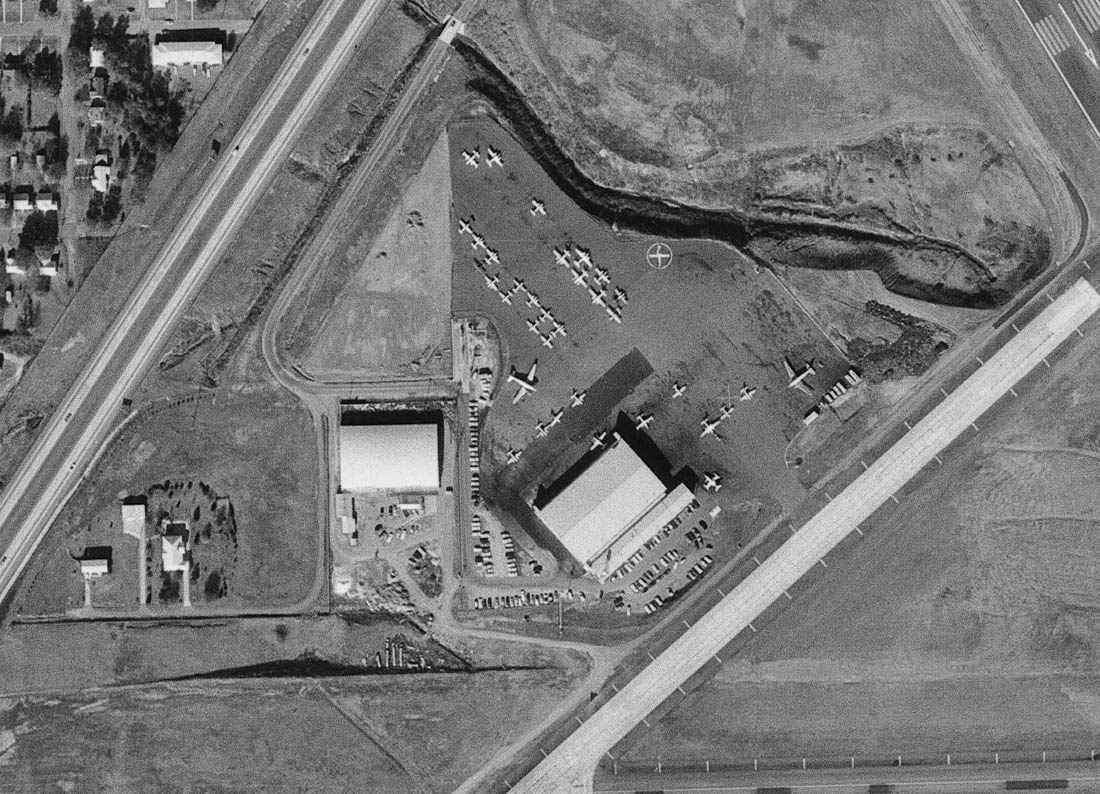 Early 1970s Hangar One postcard shows the addition of a third building on the north side of the ramp. The entire neighborhood west of I-85 had been cleared to make way for the expressway relocation and access ramps that would accompany the construction of the midfield passenger terminal complex. Ironically, a few of the houses that had been cut off from the rest of the neighborhood when the freeway was built in the early 1960s were still standing. 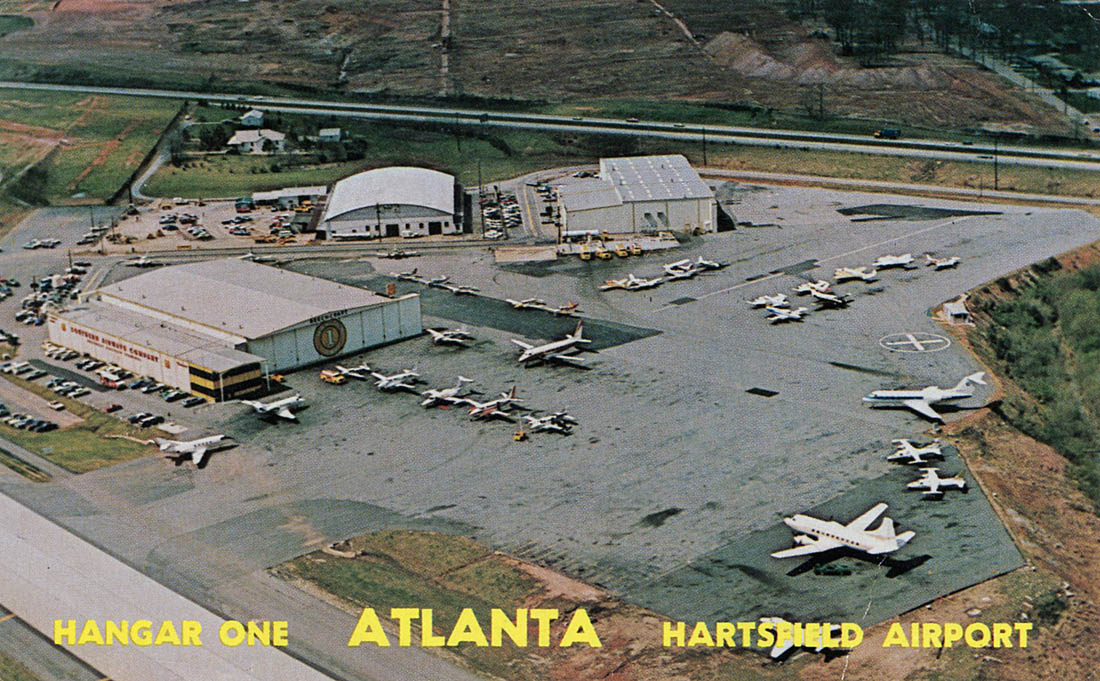 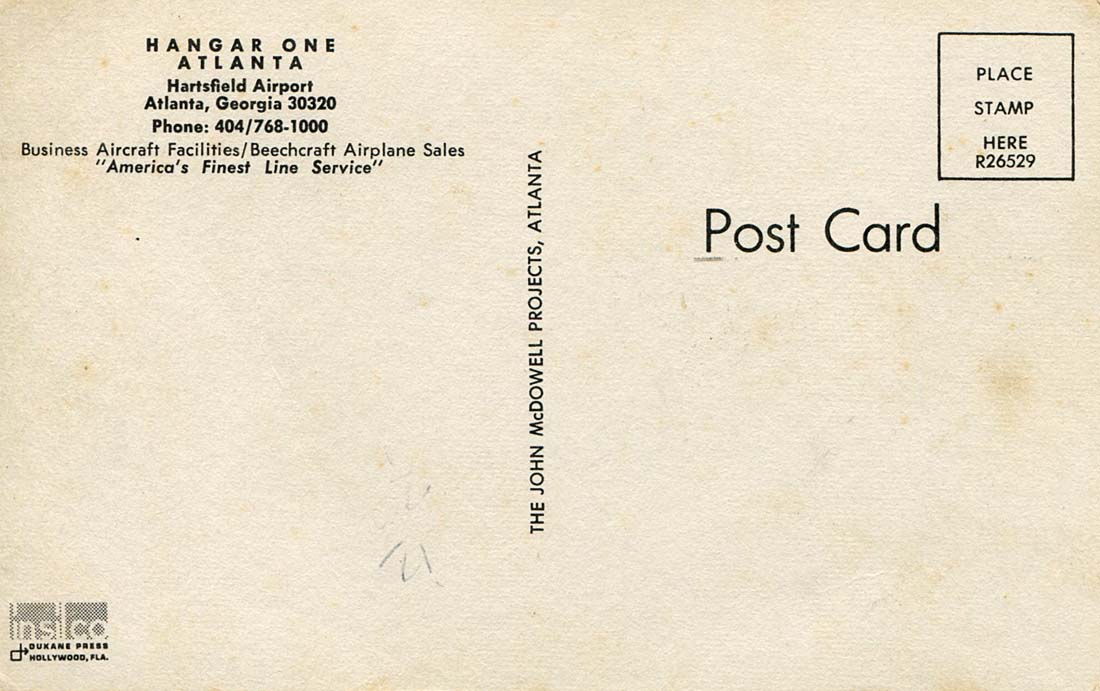 This July 1980 view from the old 1961 "Jet Age" terminal shows Hangar One as most ATL passengers saw it, as a collection of general aviation buildings off in the distance. Following the opening of the midfield terminal, construction began on a 4th parallel runway on the north side of the airport and Hangar One stood directly in its path. Photo courtesy of Air Nikon. 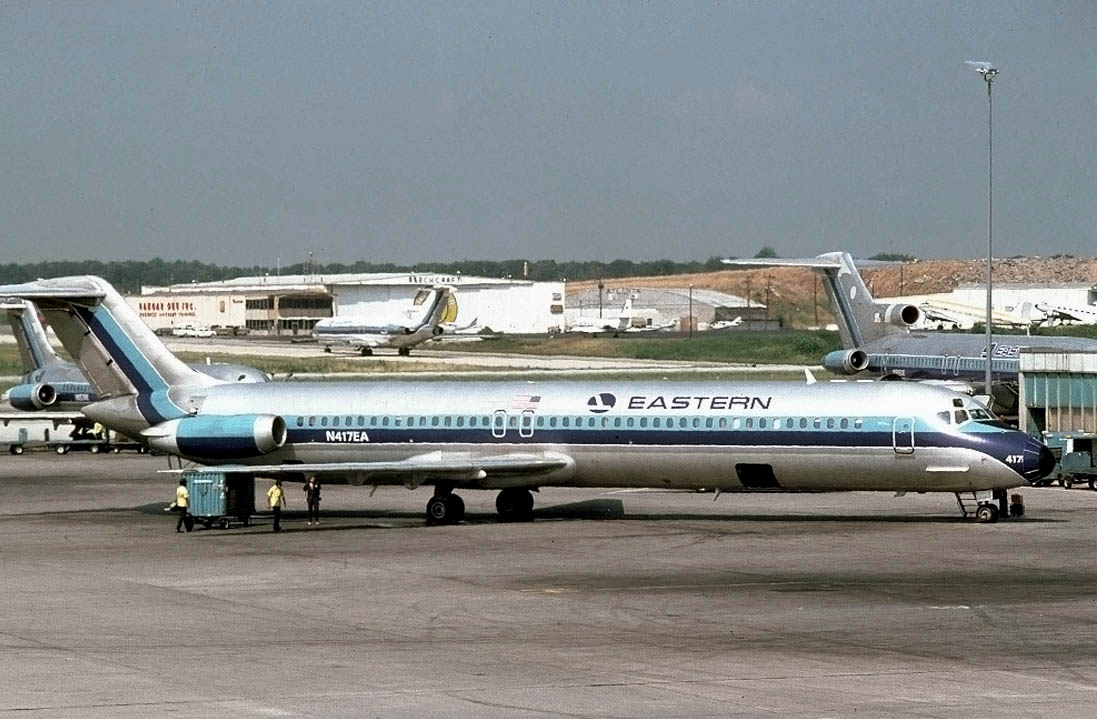 The former temporary terminal can be seen in the distance on the left side of the Hangar One complex in this 1981 view. The entire facility was soon cleared for the construction of Hartsfield's 4th parallel runway that opened in December 1984. 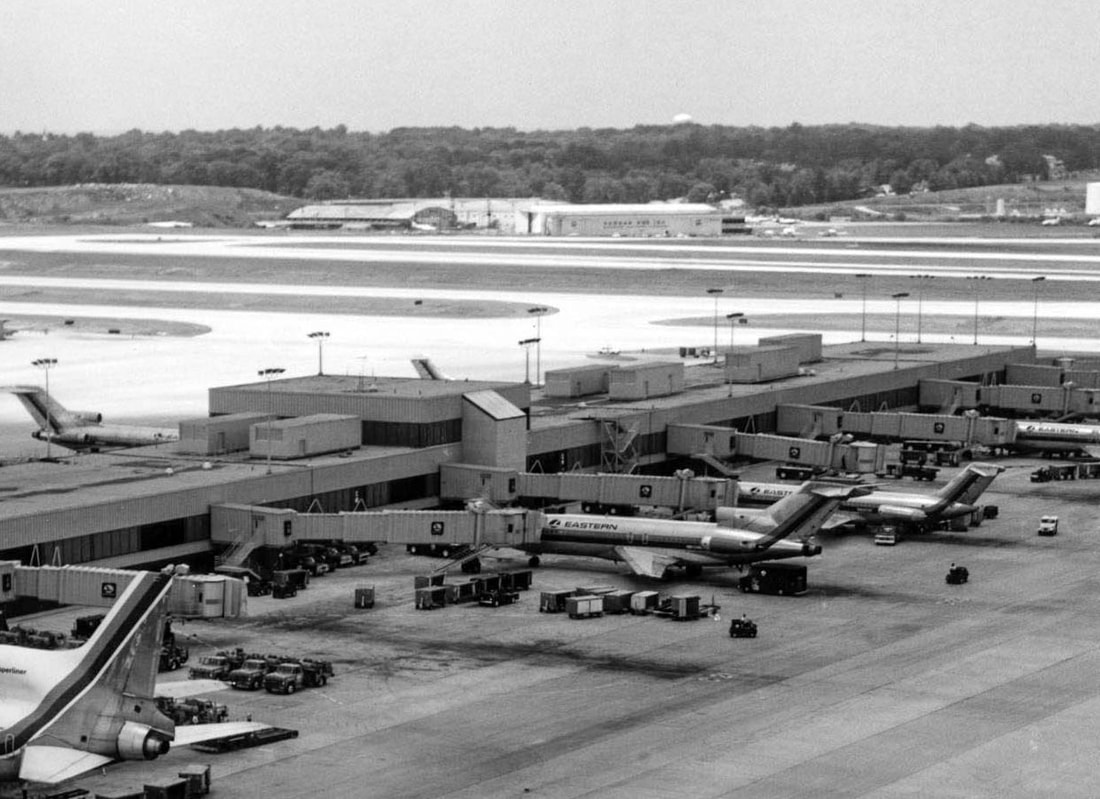 The end of runway 8L (8 left) now occupies the former site of Hangar One. No traces of the ramp or buildings remain. 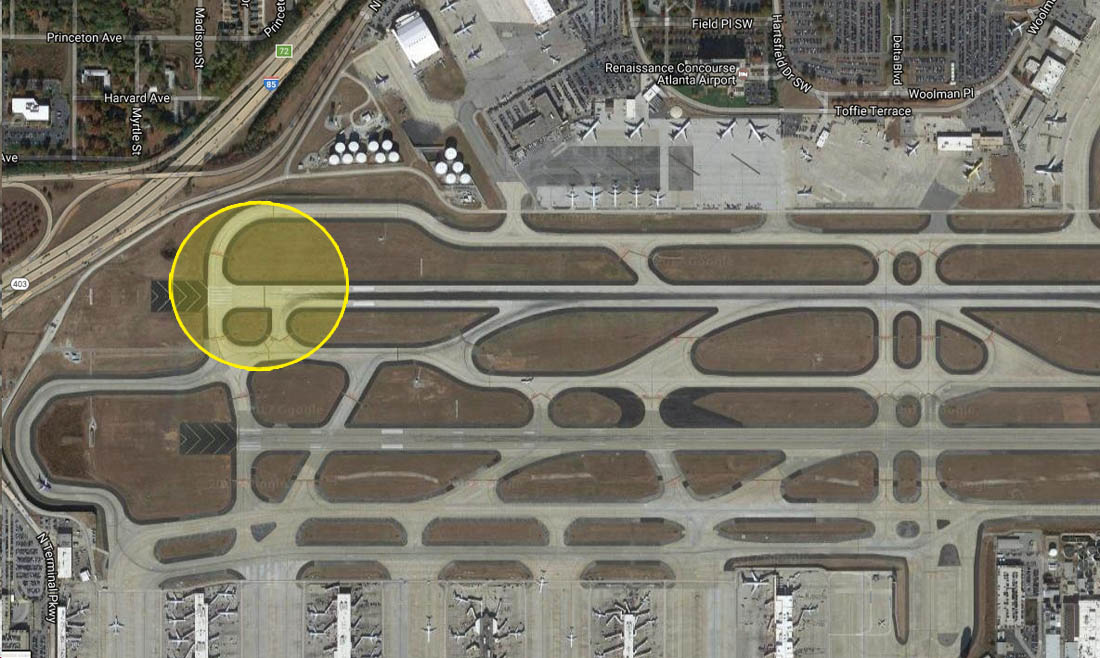