Air service in Macon, GA spans ten decades and includes at least sixteen airlines serving three airports. We trace the evolution of airline service from the 1920s to the present day.
Before the advent of the airlines, Macon was home to the world's first organized crop dusting company, Huff Daland Dusters, Inc., the predecessor of Delta Air Lines. Delta maintained a crop dusting division until 1966.

Florida Airways became the first airline to serve Macon when it added the city as a stop between Jacksonville and Atlanta on September 27, 1926. The first flight was undertaken with a brand new 6-seat Stinson Detroiter christened "Miss Macon". This R.E.G. Davies map is taken from the book Eastern: An Airline and Its Aircraft. 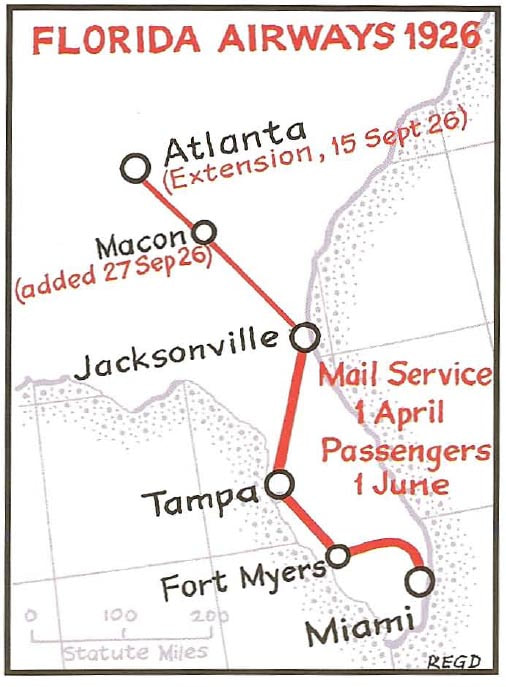 Florida Airways merged with Pitcairn Aviation and became known as Eastern Air Transport. This April 1, 1931 timetable, courtesy of Björn Larsson at Timetableimages.com, shows two flights a day at Macon, one northbound and one southbound on the Atlanta - Miami route. Flights operated from the long closed Miller Field airport. 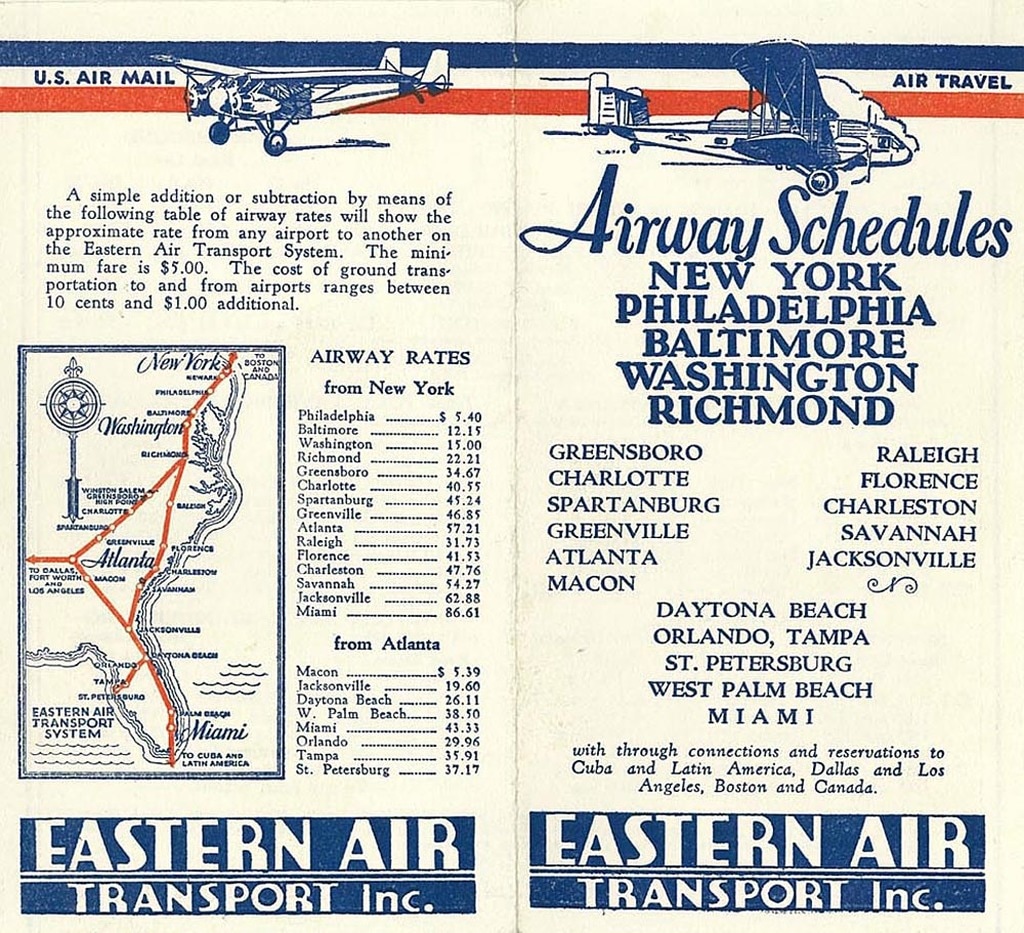 A December 1932 photo of General Blanton Winship and his nephew David Walker in front of the Eastern Air Transport building at Miller Field. This photo is from the collection of Jim Preston and originally appeared on a page about the airport on the Abandoned & Little Known Airfields website. 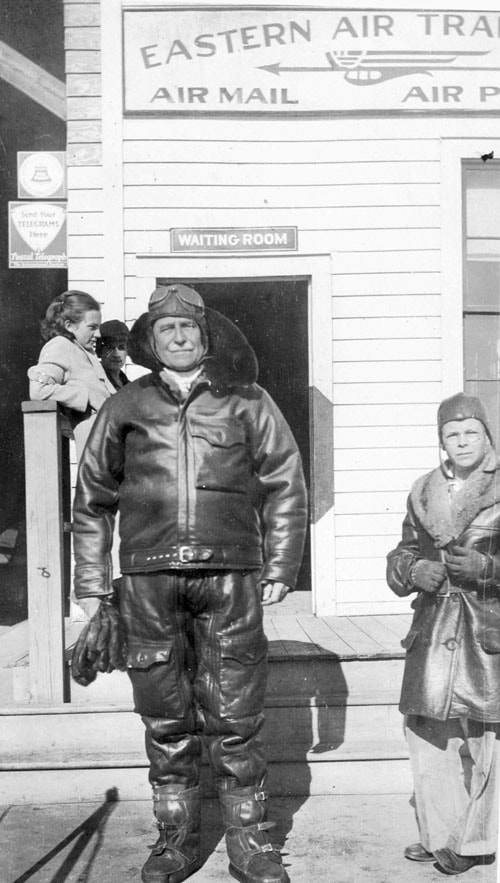 In 1936, the city of Macon began construction of a new and larger airport to better accommodate Eastern's expanding service and larger aircraft. The new terminal and administration building, pictured under construction in this 1936 photo, included a concrete apron and the latest weather and radio equipment. The facility was completed and opened in 1937. From the Works Progress Administration (WPA) Projects in Georgia collection, Hargrett Rare Book and Manuscript Library Collection. 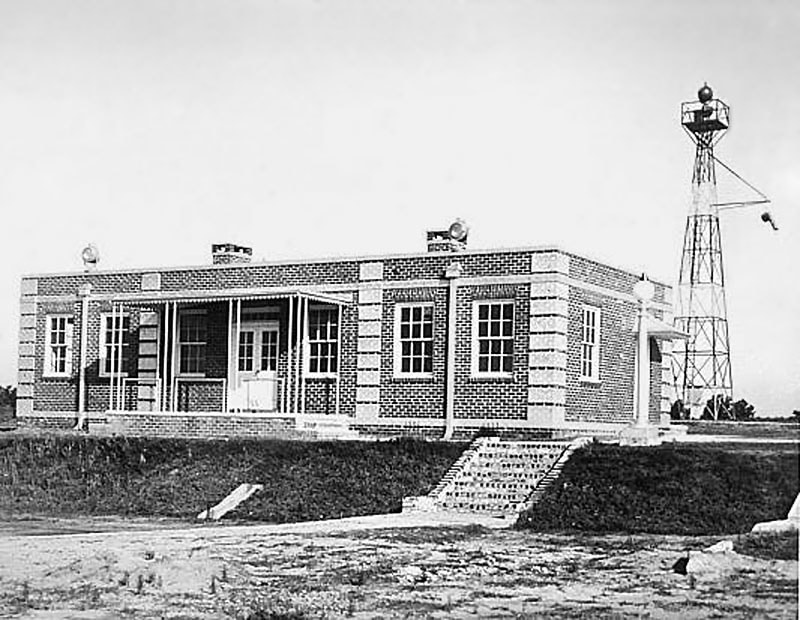 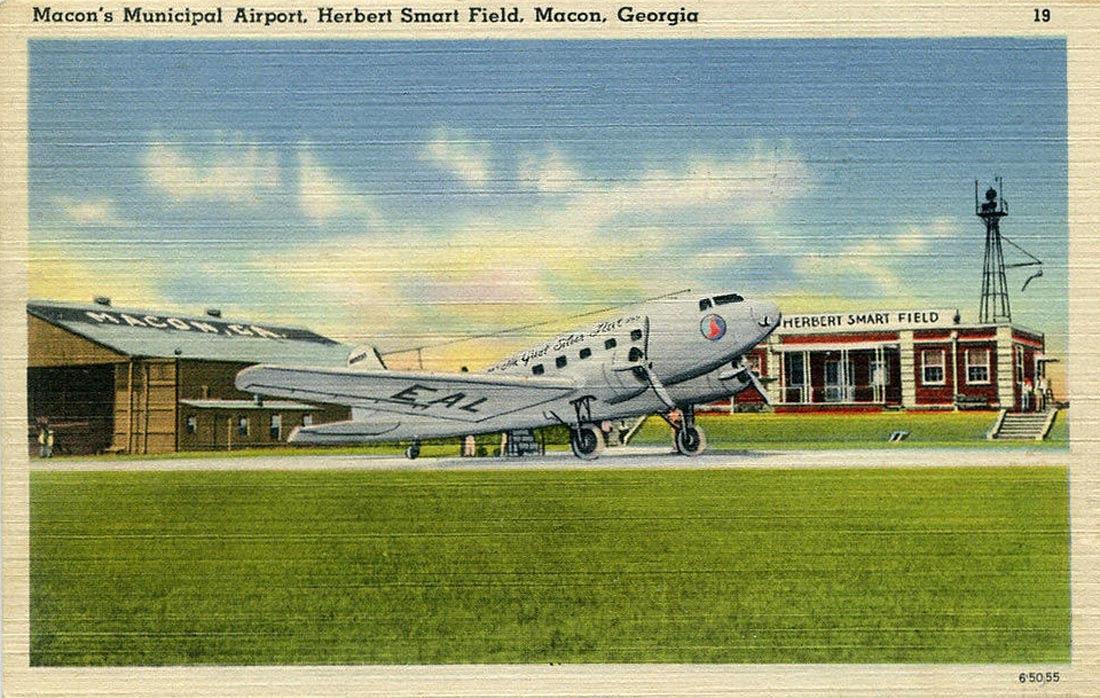 A freak winter tornado struck Macon's Herbert Smart Airport on January 30, 1947, destroying most of the structures and aircraft at the field. Damage was so extensive that Eastern Air Lines was forced to move operations to Cochran Airport (now Middle Georgia Regional Airport) south of the city . 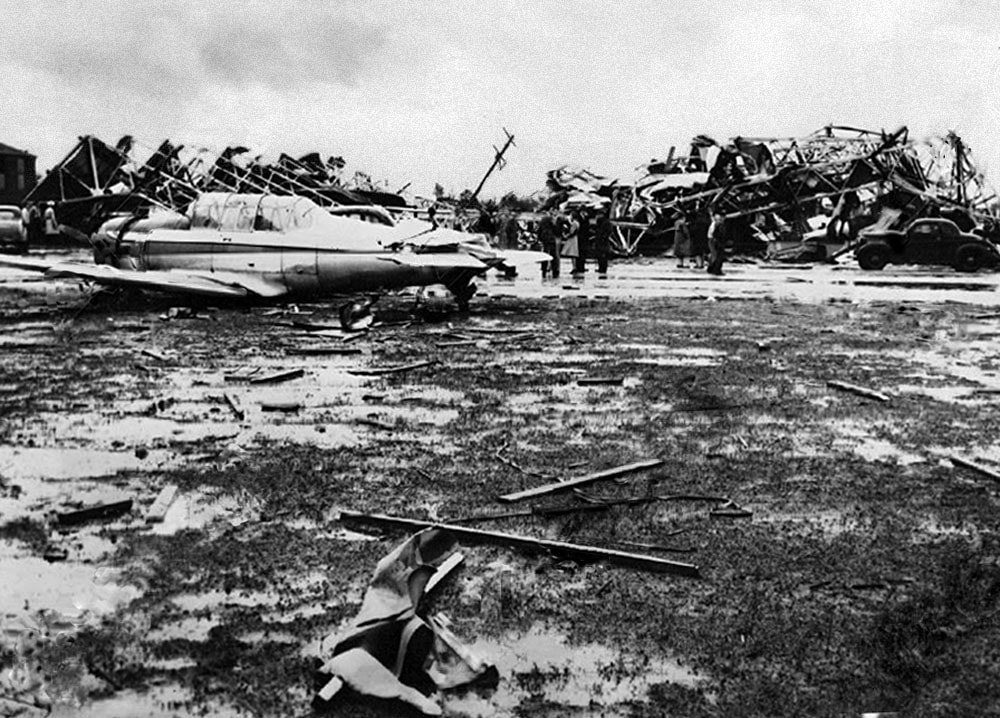 Delta Air Lines inaugurated service into Macon on July 1, 1947 as a stop along the Atlanta - Savannah route. 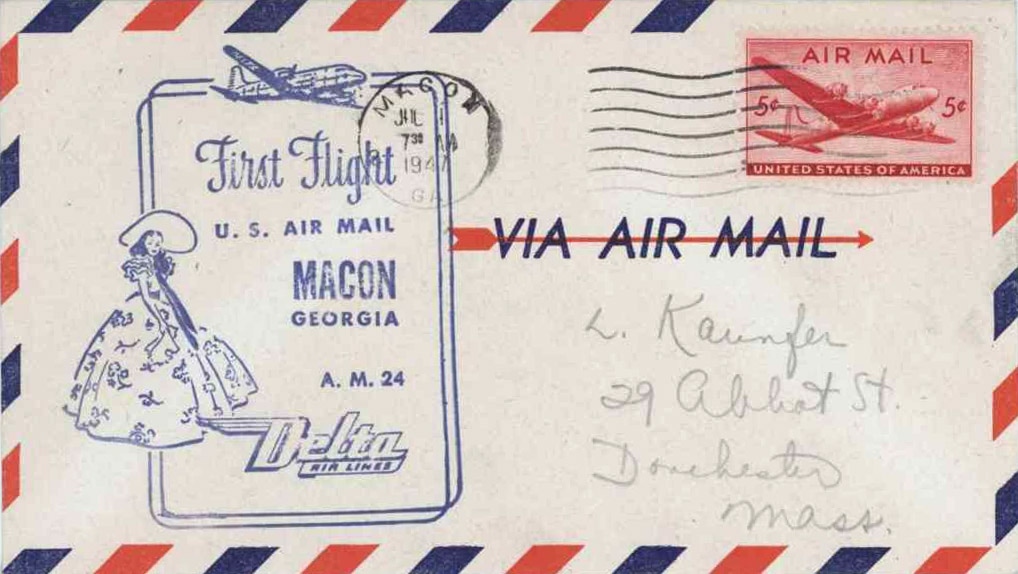 "All flights are operated with the famous Douglas DC-3." Turnaround time in Macon was two minutes! This service lasted only a few years and by 1954 Southern was no longer flying to Macon. 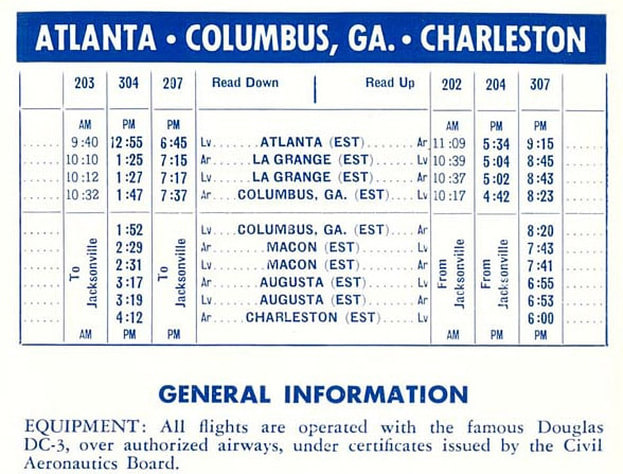 A fantastic Delta Air Lines promo photo showing Convair 440 N4812C at Macon's stylish new mid-century modern terminal in 1959. One of the great features of the terminal was the observation deck seen at far left. The main terminal is still in use although it has been expanded and modified extensively. The distinctive zig-zag roofline still exists but has unfortunately been hidden from view. 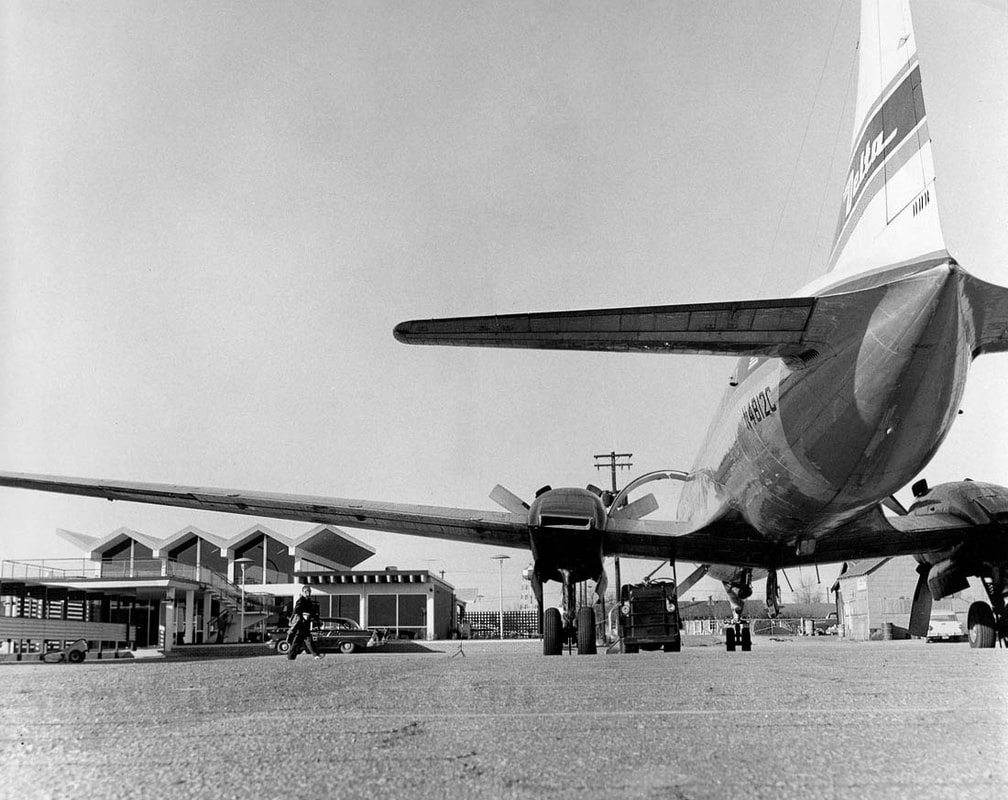 Traffic increased steadily at Macon from the 1950s into the 1970s with Delta Air Lines eventually overtaking Eastern in market share during the early 1960s. Source: various editions of Airport Activity Statistics published by the Civil Aeronautics Board. 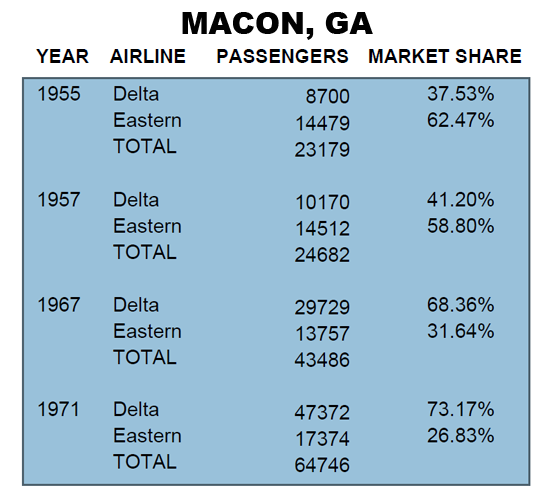 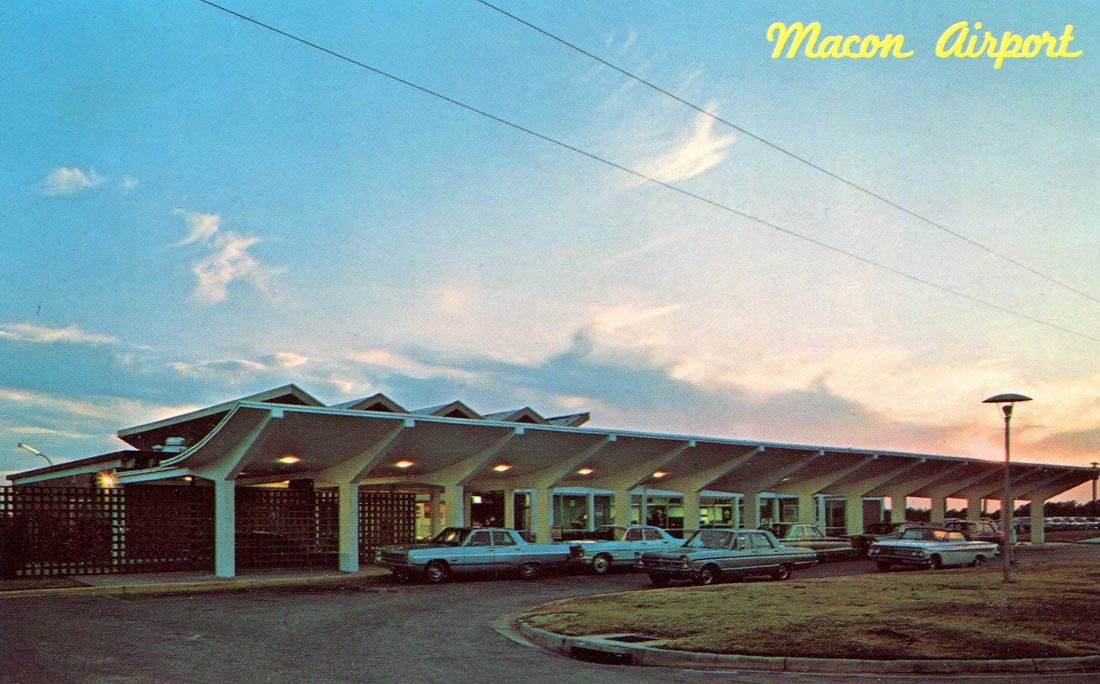 The October 15, 1971 issue of the Official Airline Guide shows 11 flights a day at Macon. The flights from West Palm Beach, Albany and Savannah stopped in Macon enroute to Atlanta. 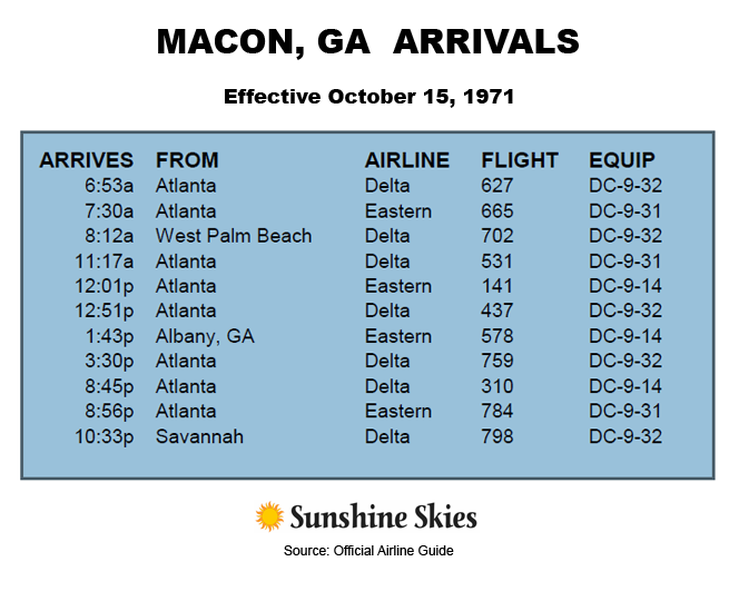 Thanks to John Munzenrider for this photo of Eastern DC-9-14 N8909E at Macon in March 1972. John wrote, "Pic taken by my father and used with his permission. Note some people are boarding the aircraft, while a woman is walking back towards the terminal. That is my grandmother. I remember going to the airport with her as some elderly relatives were flying out. This was back in the day when you could go to the gate without a ticket and you could actually go on board the aircraft even if you were not flying. N8909E was delivered to Eastern in 1966, sold to Republic in 1979, flew with Republic and Northwest until 2004. " 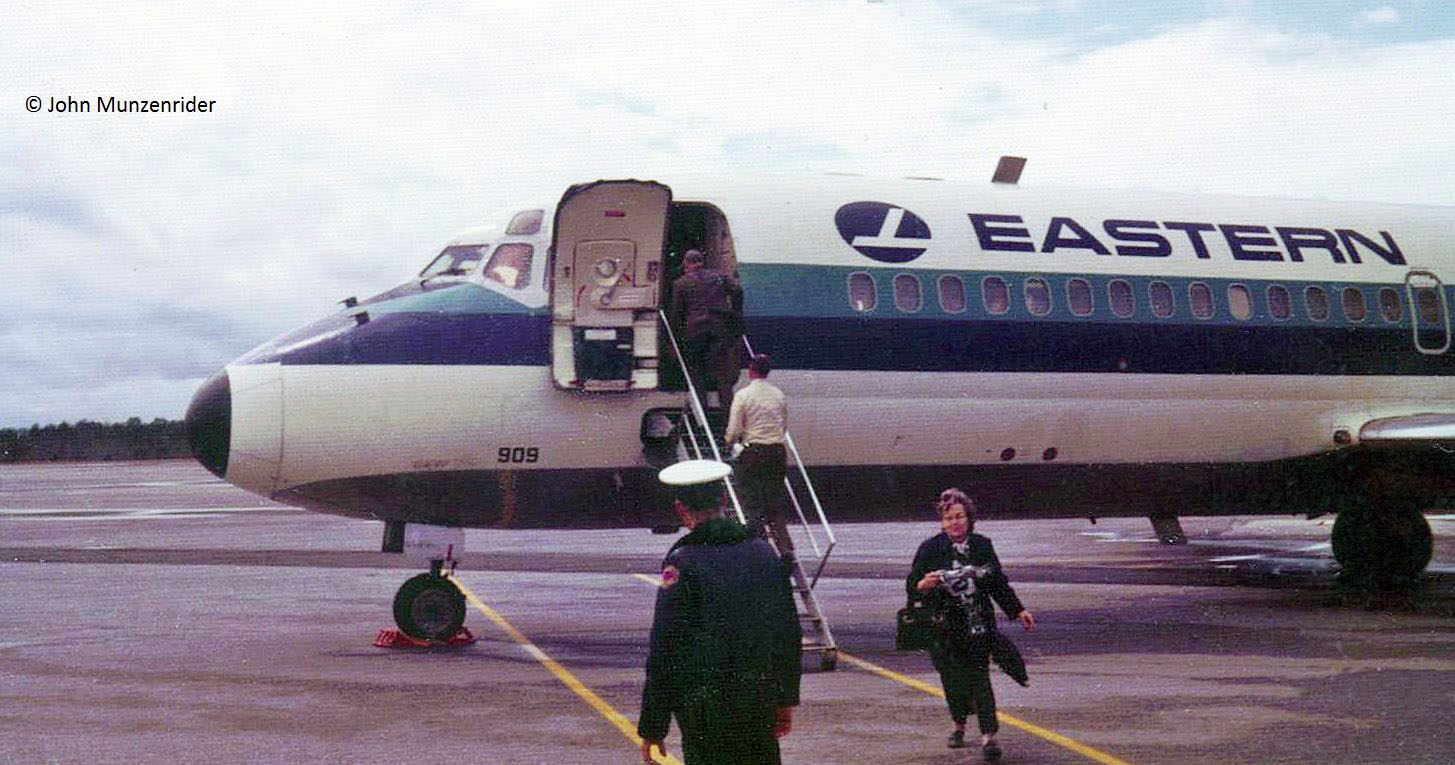 Aerial photo taken on March 9, 1972 showing Macon's two runway layout. The passenger terminal is on the north side of the field, just above the departure end of runway 13. 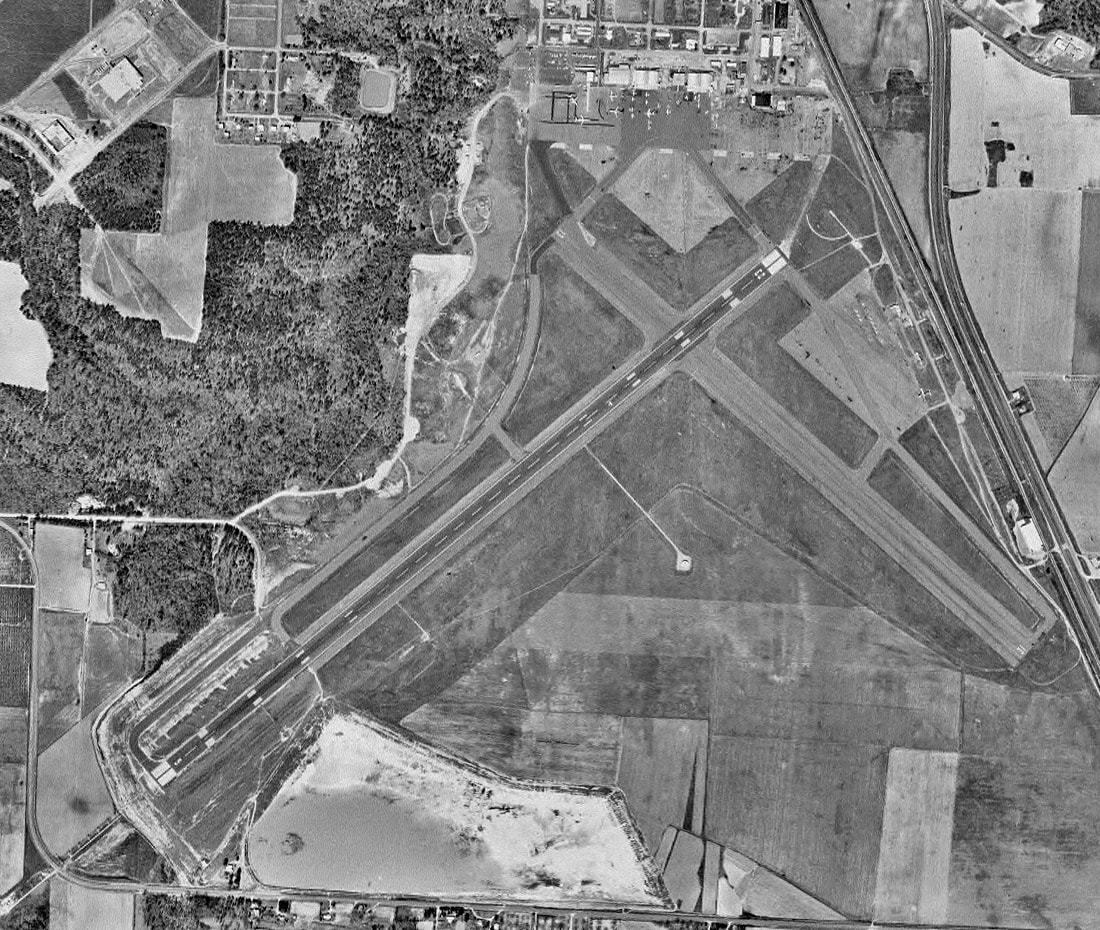 A detail from the same March 9. 1972 photo shows three DC-9s at the terminal., one DC-9-10 and two DC-9-30s. Judging from the direction of the shadows, this was taken between noon and 1 o'clock and the aircraft match the types shown in the list of arrivals above. There is also a DC-3 parked just to the east of the terminal but it was either a private or government aircraft. 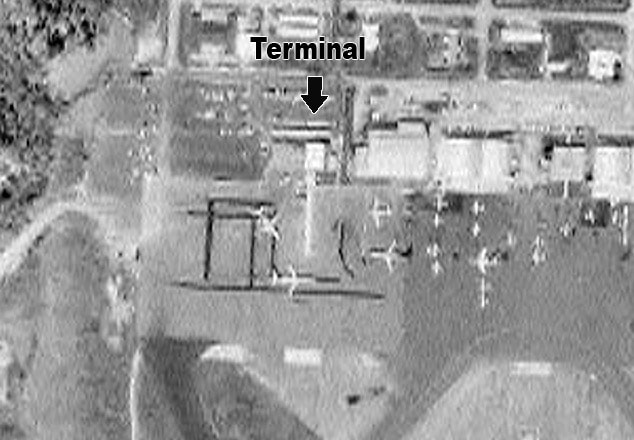 In these next two photos, also courtesy of John Munzenrider, Eastern's DC-9-31 N8944E is pictured at Macon in June 1973. 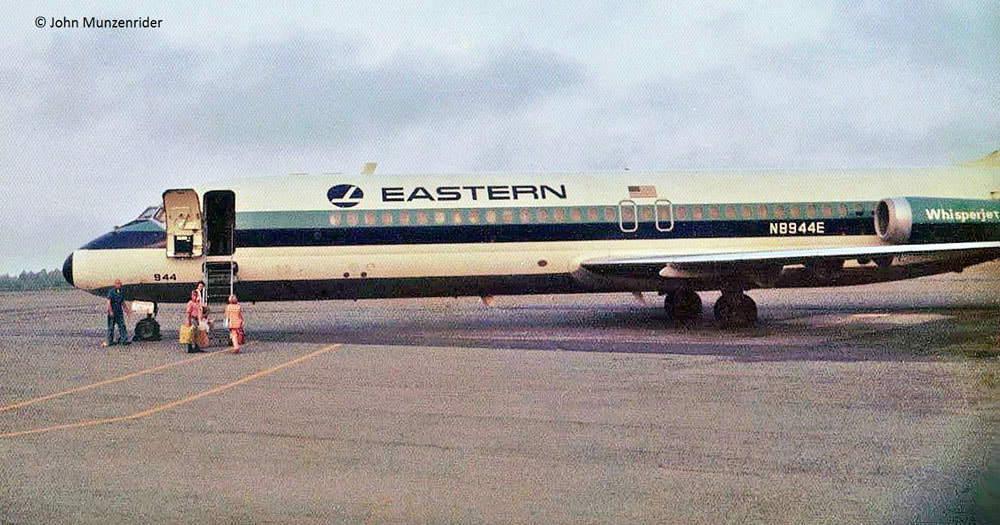 John wrote, "That's my mother, me, and my 2 sisters climbing up the airstairs! Pic taken by my father, used with his permission. Special thanks to William Curry for his efforts to enhance these pics with Adobe Photoshop Elements." 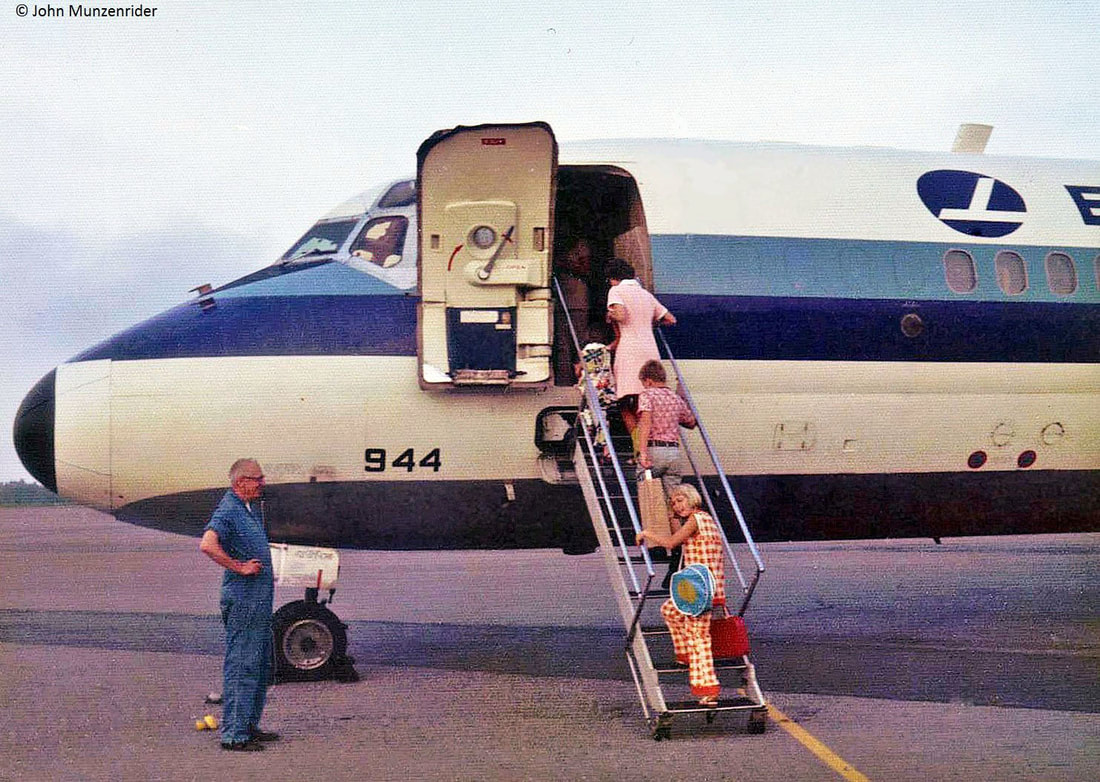 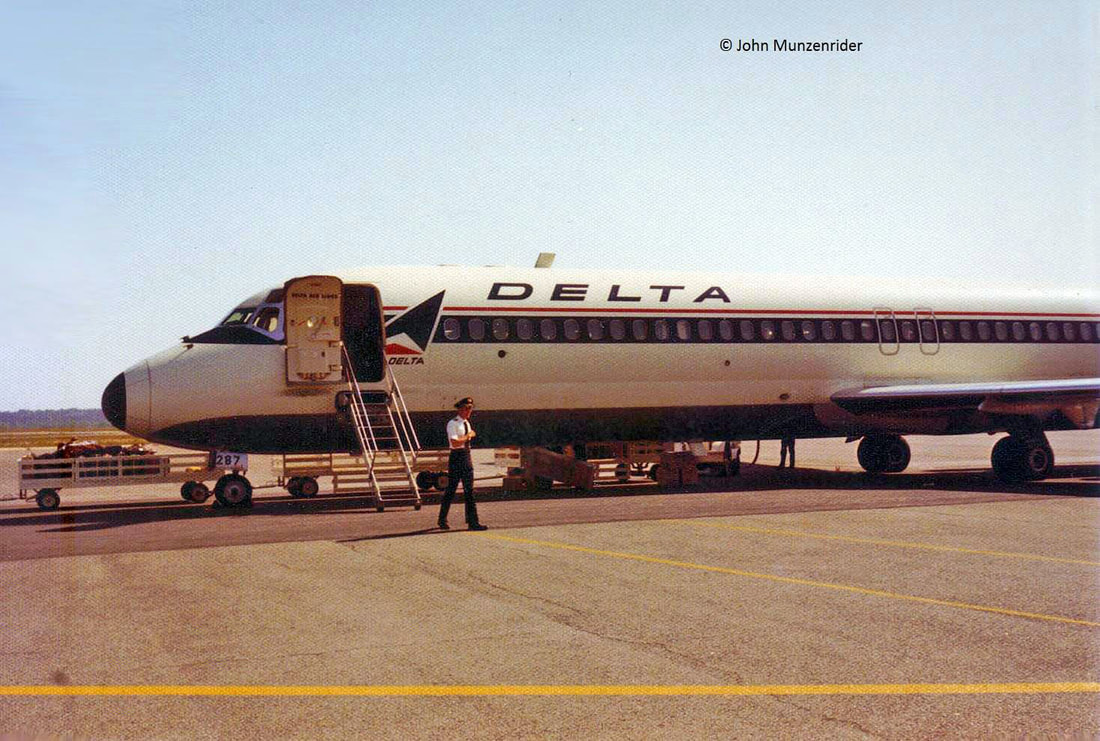 A close up of passengers boarding Delta's DC-9 N1289L in April 1975 for the short half hour trip up to Atlanta. John wrote, "My sister and mother are climbing the airstairs. Where am I? I was probably already on board!" 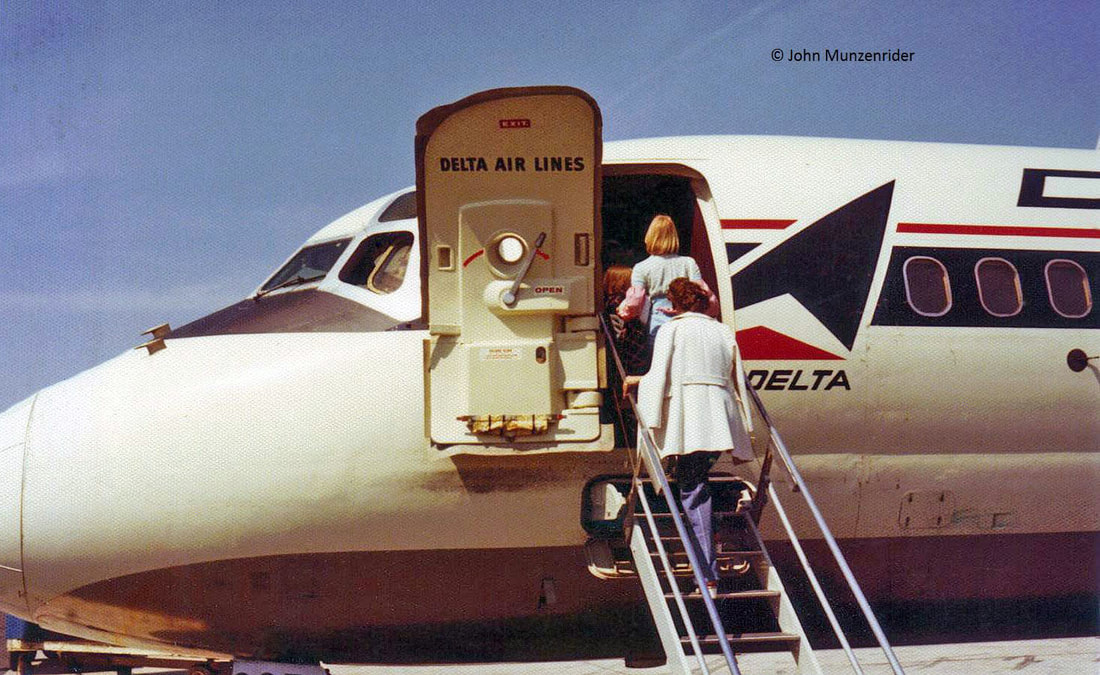 Delta DC-9-32 N1277L at Macon in August 1976. John explains, "I had just flown on this aircraft from Atlanta. Pic taken from the outdoor observation deck on the roof of the Macon terminal. Note the Bicentennial emblem behind the front door!" 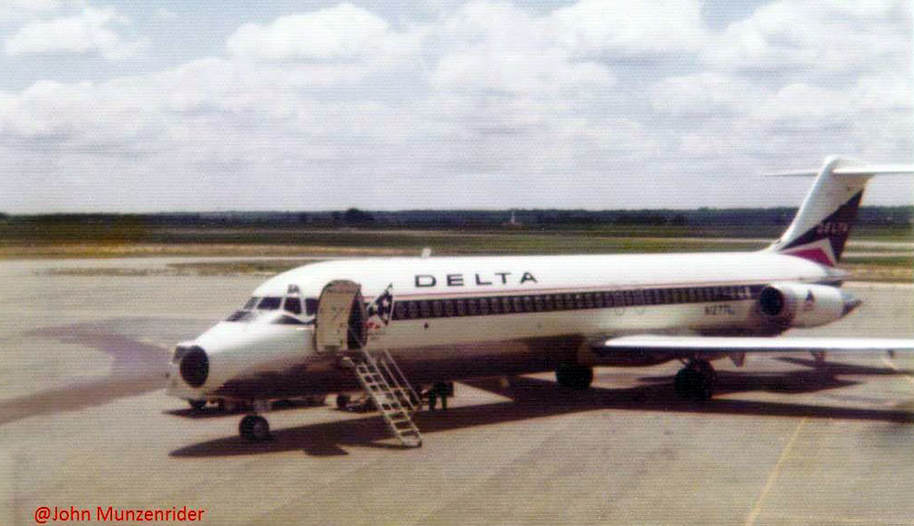 Here's one last Delta DC-9 photo courtesy of John Munzenrider, also from August 1976. "The early morning flight from Atlanta is just arriving at Macon. I would then fly this aircraft back to Atlanta. Pic taken from the outdoor observation deck on the roof of the Macon terminal. Scheduled flight times were under half an hour. Flying ATL-MCN was very quick once you got airborne. Flying MCN-ATL was a whole other story, as we would often circle over ATL due to high volume of traffic, leading to very tight or even missed connections. Despite the short flight time, Delta managed a full drink service on full DC-9s. Delta used to have 4 flights a day from Macon on DC-9-30s, Eastern had 3. I remember they were always packed." 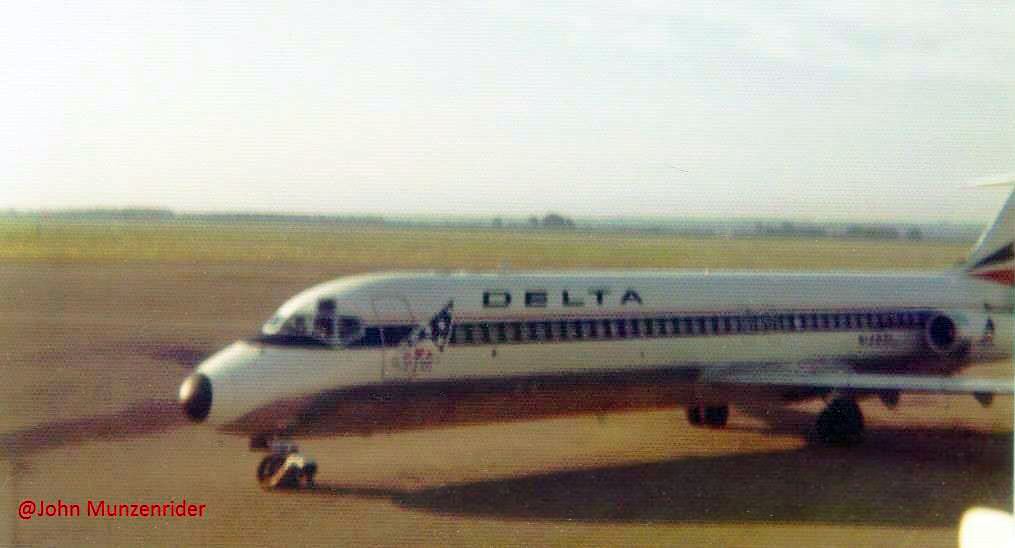 Delta Air Lines celebrated 30 years of service to Macon on July 1, 1977. This city timetable shows four daily round trips between Macon and Atlanta, all flown with DC-9-32s.
Airline travel at Macon reached its peak in the late 1970s with nearly 200,000 passengers passing through the airport in 1977, the final year before the passage of Airline Deregulation. Sources: Civil Aeronautics Board and DOT 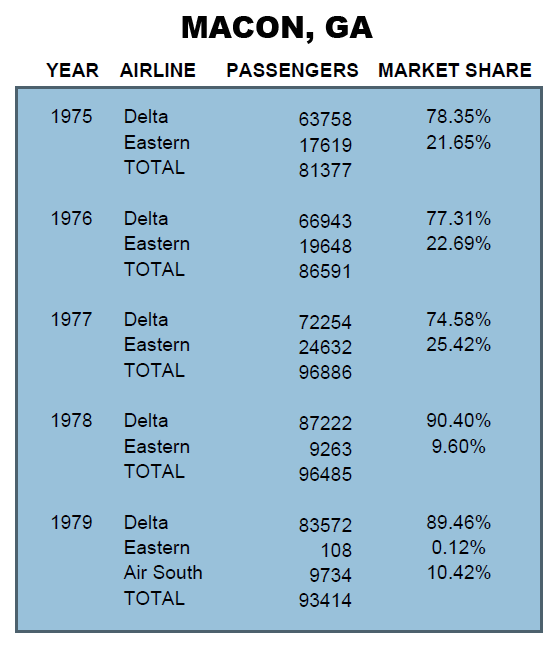 With the advent of Airline Deregulation in October 1978, Eastern Air Lines, which had already reduced service to one flight a day, wasted no time in abandoning Macon. Eastern's 1978 Annual Report contained this assessment: 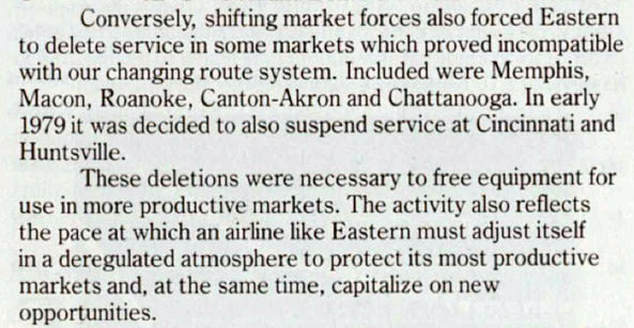 Capitalizing on Eastern's departure, Air South began service to Macon on March 15, 1979 with two daily round trips using 40-passenger Martin 404s. Flight frequencies were increased to three flights a day on June 15, 1979. Air South's passenger totals at Macon in 1979 actually surpassed Eastern's totals from the previous year (as seen in the chart above).
As the 1970s ended, there were seven departures a day from Macon, all to Atlanta: four Delta DC-9-32 flights and three Air South Martin 404 flights. Schedules from the November 15, 1979 OAG can be found on the Departed Flights website..
COMING SOON: HISTORY OF MACON AIRPORT FROM THE 1980s TO THE PRESENT
If you would like to contribute photos, scans, stories or additional information about any of the airlines, airports or aircraft on this site, please contact me, David Henderson, using the mail icon above. Help preserve the colorful history of aviation in Florida and Georgia!