The following collection of photos of Atlanta Airport were sent in by Brian Sassaman and were taken by his grandfather Hershel Clemans shortly before the opening day of the new terminal, probably during an "open house" tour for airline employees. The exact date is unknown, but I would guess April 1961. Mr. Clemans worked for Eastern Air Lines as a radio builder and repairman starting around 1930 and, luckily for us, was a hobby photographer. These incredibly clear slides show Atlanta Municipal Airport's gleaming "Jet Age" terminal in the final stages of construction, many from unusual vantage points.

Atlanta's "Jet Age" terminal is nearly complete in this fantastic shot taken from the ramp of the temporary terminal which had been in use since 1948. The center concourse of the old facility extended in front of the 1961 terminal which explains why the Eastern Electra is parked near the new entrance ramp. At far right you can see the beginning of what would later become concourse A which could not be built until the previous terminal was demolished. 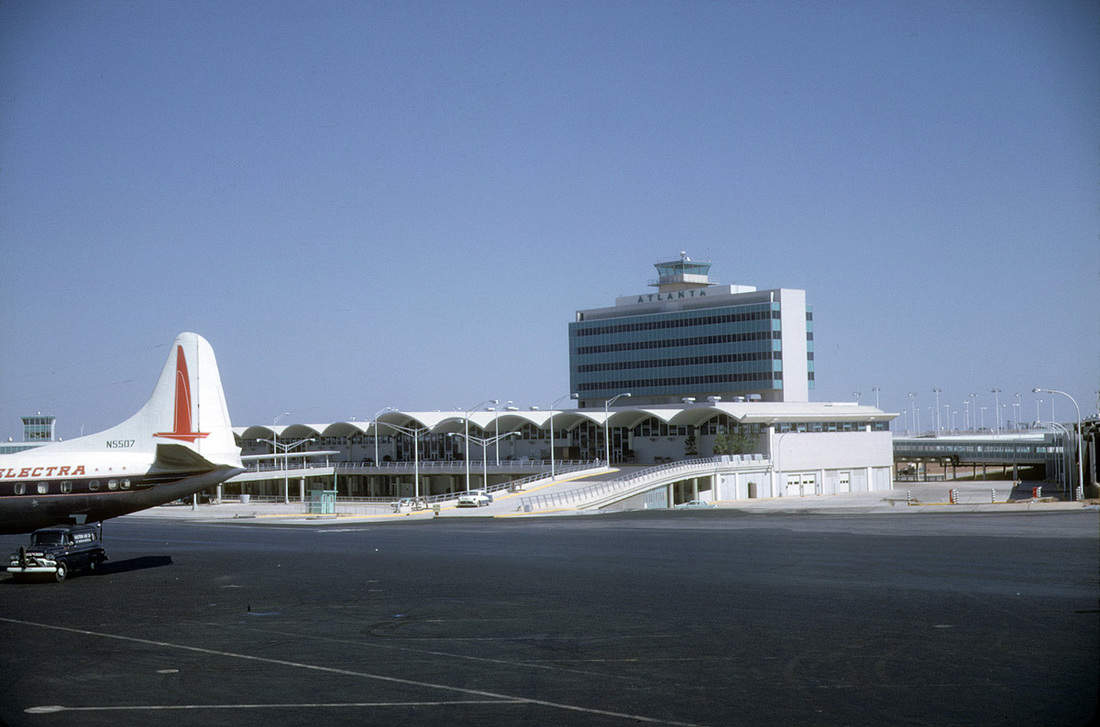 Here's a closer look at the main terminal with its graceful barrel vaulted roof. The ticketing lobby was on the top level and baggage claim was in the lower level. The tarp blowing in the wind at far right covered part of the unfinished corridor that would later lead to Eastern's concourse A. 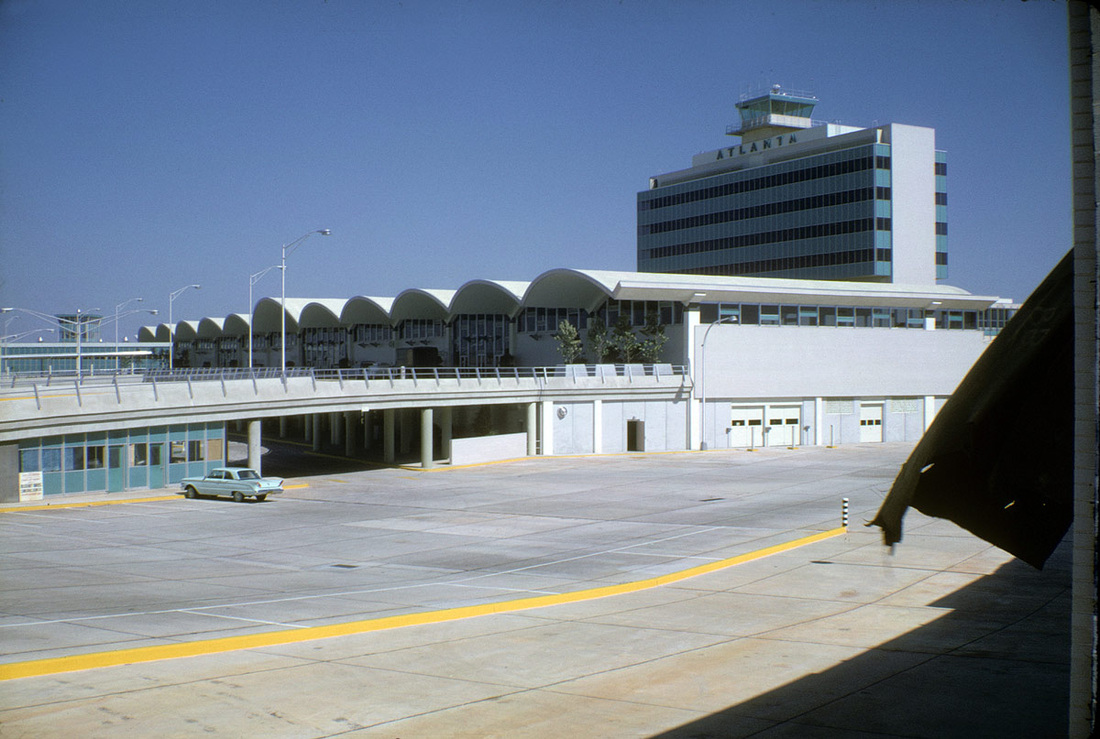 A great view of what was soon to be the largest single airport terminal in the country. There appears to be a flurry of last minute activity in the main lobby at right. Interestingly, the asphalt area in the foreground was still being used by aircraft at the temporary terminal. This vantage point would have been near the end of the old central concourse. If you look carefully, you can spot a portable taxiway light where the asphalt meets the concrete, presumably used to keep aircraft from taxiing into the new light poles at night. 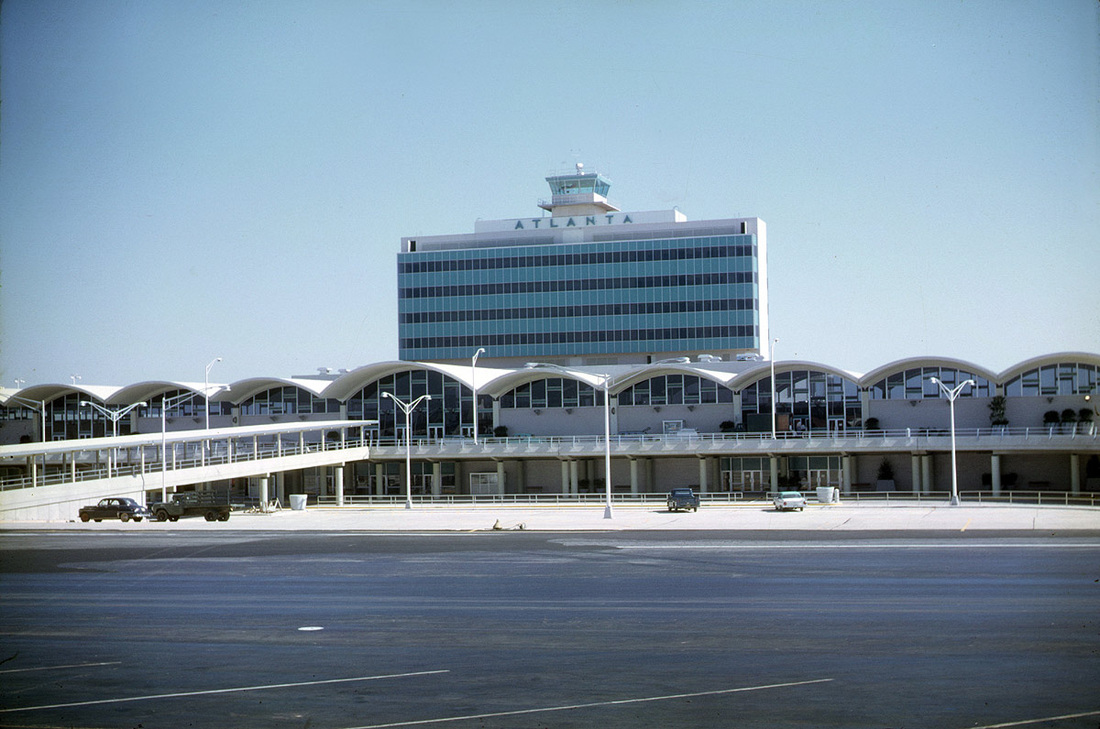 A side view of the control tower with the junction of Delta's concourses E and F in the foreground and a nice display of some of the thousands of aquamarine baked-enamel panels that helped define the complex. The 1961 terminal was the first in the world to be designed specifically for jet aircraft, yet only Delta Air Lines had the foresight to have their gates built on a second level to allow jetway access to planes. All other airlines initially had gates at ground level and continued to use stairs for aircraft boarding. 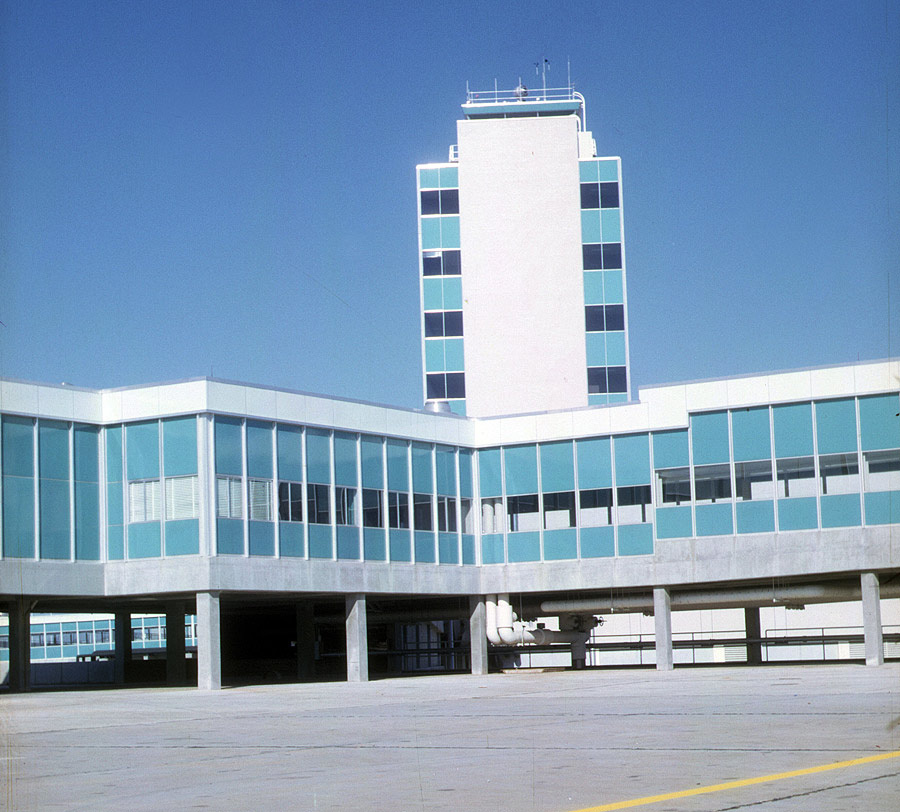 The monolithic administration and control tower as seen from the area between concourses E and F.

﻿A dramatic view of the terminal and tower as seen from the roof of concourse B. Concourse C/D and the ramp that led to the observation deck can be seen to the right and concourse E is just beyond that. The area at the base of the tower housed the Passport Restaurant and lounge. 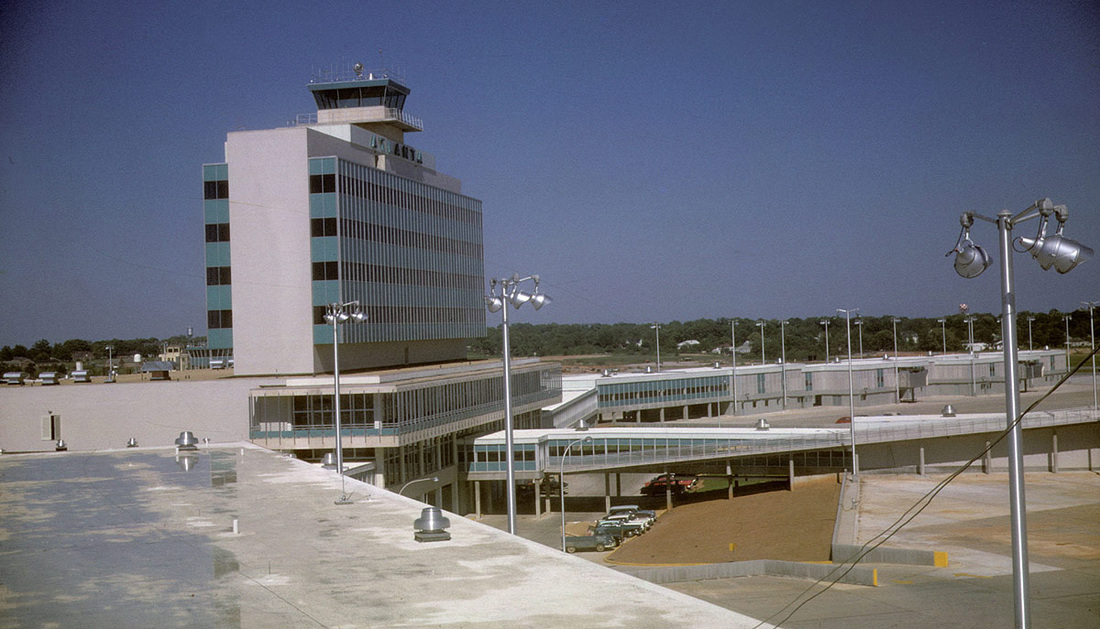 This view facing southeast from atop concourse B shows Delta's maintenance base in the background and the "Y" shaped concourses C and D in the foreground. The observation deck is clearly visible in this shot with park benches to the left and a covered area to the right. The aircraft at left is a Delta Curtiss C-46 Commando air freighter. Beyond the aircraft is the end of what is now runway 26L. 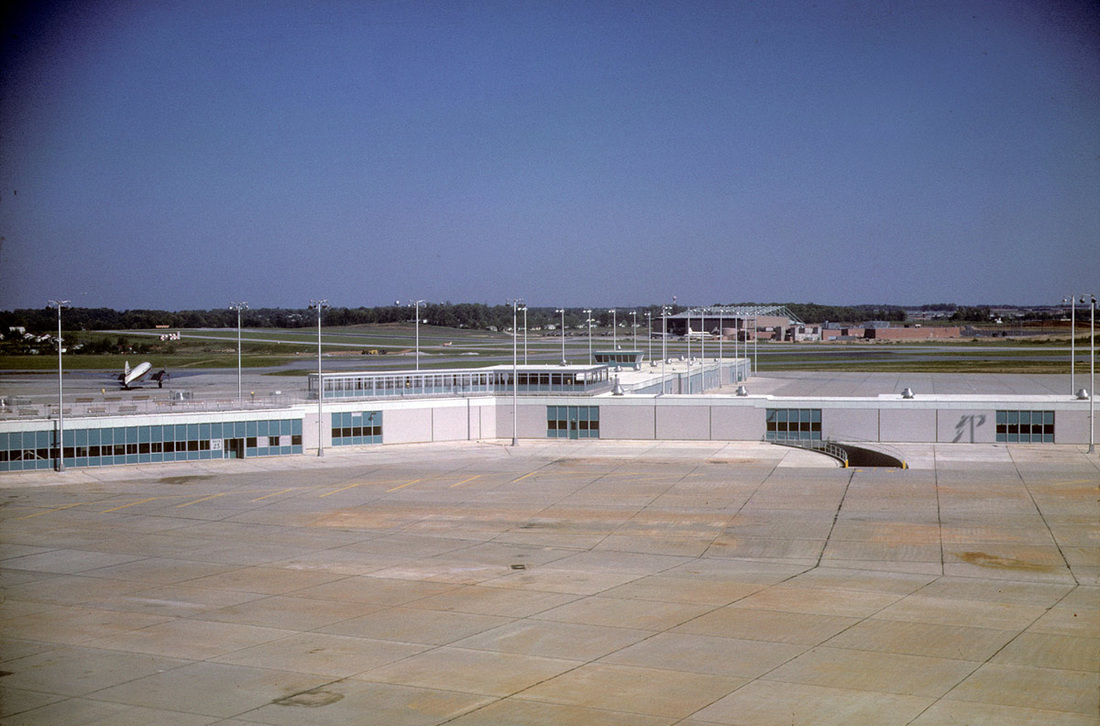 The back side of the tower as seen from the nearly completed observation deck. In the post 9/11 atmosphere of passengers being treated as potential criminals, it's hard to imagine a time when passengers were actually encouraged to go up on the roof and stand only a few feet away from parked aircraft! Those were the days. Atlanta's old observation deck was one of the best around and was right in the middle of the action with great views of the concourses and runways. It featured park benches, an enclosed area and speakers that played air traffic control transmissions. 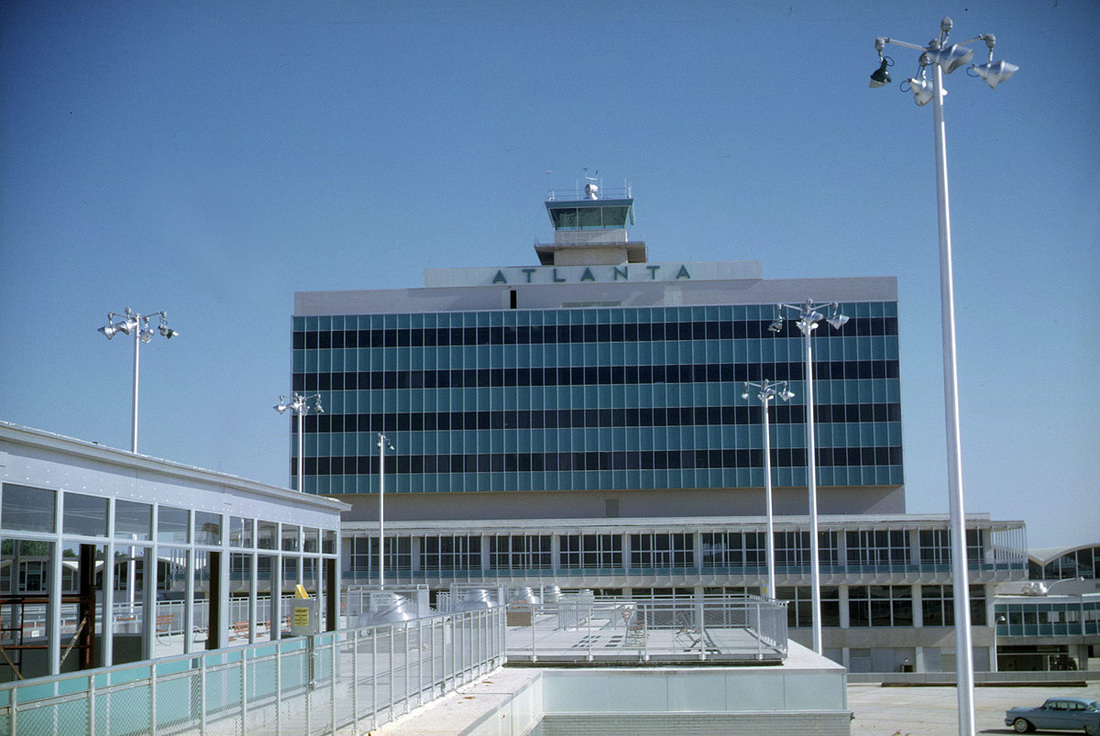 Here's a close up of one the speaker boxes. It's blurry here, but the yellow sign said "Hear radio tower and pilots talk. Hear airport facts." The benches in the background look like they still needed some work. 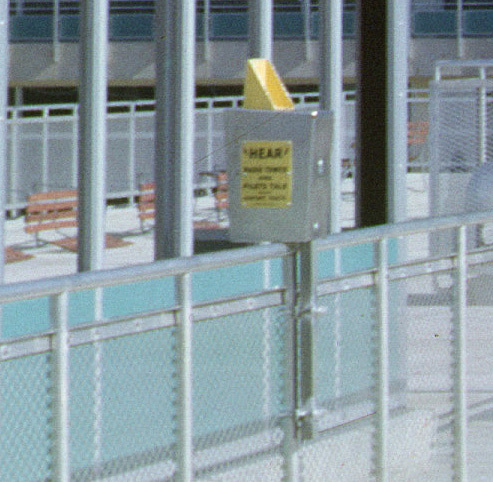 Another excellent view of the back of the terminal from between concourses D and E. Gate 22, at left, was used by Capital (which merged into United in June 1961) and, later, Piedmont. 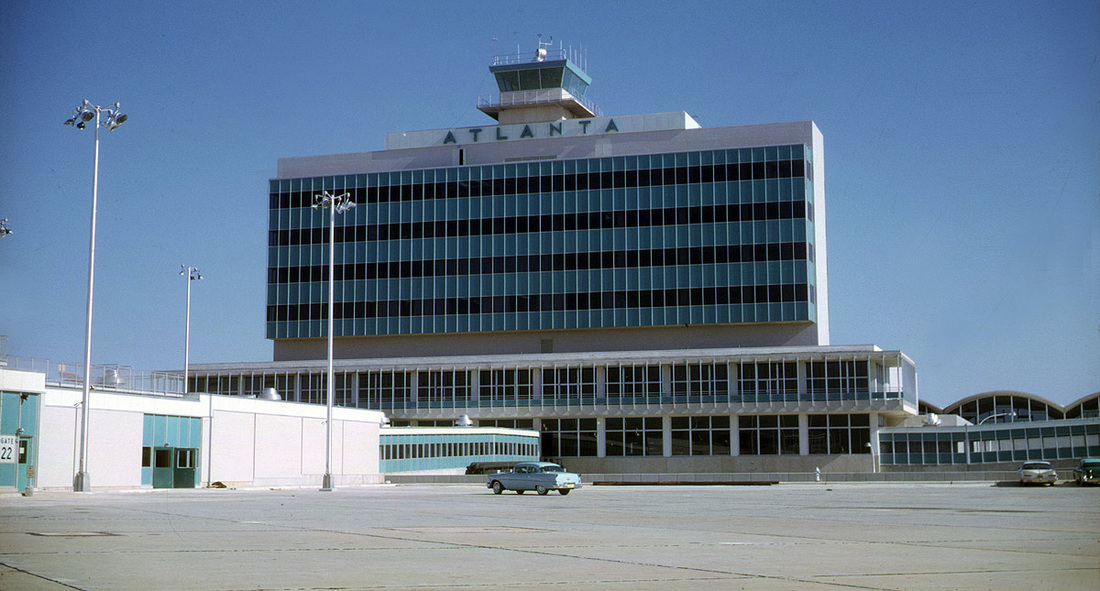 The view from the exit road. The entire area to the left side of the building was later filled in when the terminal was expanded  in the early 1970s. 23 years later, when the building was being demolished, I took a shot from nearly the same spot . You can see it HERE. 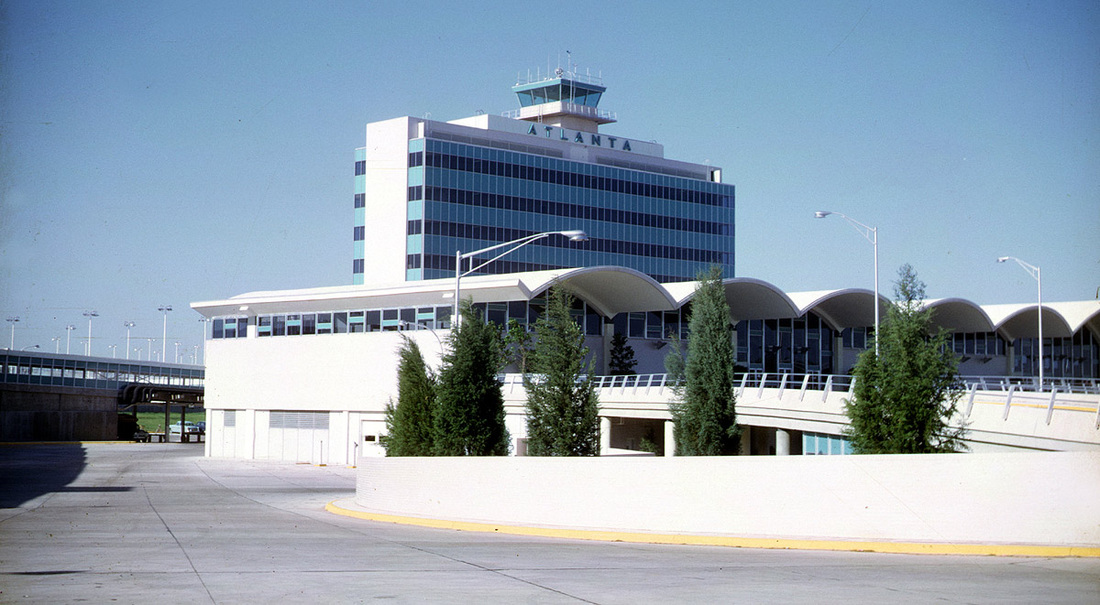 Another view from the exit ramp shows off the Jetson's-like angles of the lobby. Even the guardrails look cool and futuristic. The landscaping was in place and the roads were paved.  Opening day, May 3rd, couldn't have been far away. 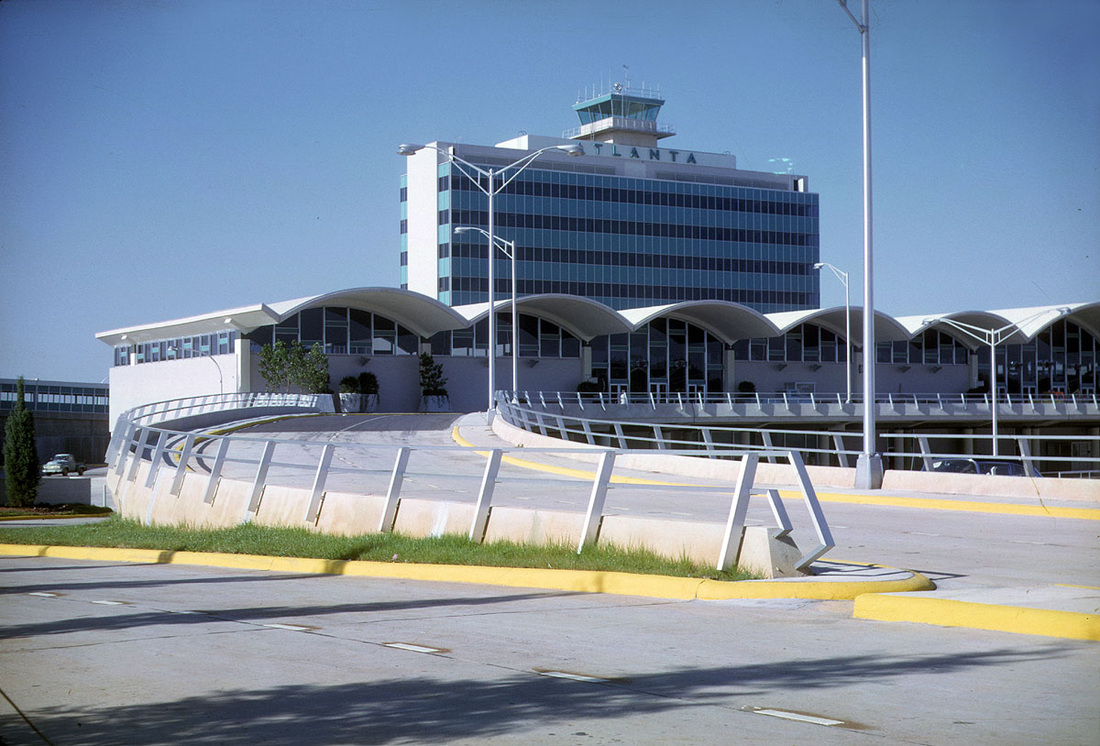 A rarely photographed view of the back of the ticketing lobby. The corridor that led to the boarding gates is to the right and the garage doors on the lower level allowed service vehicles access to the baggage claim area. This entire area was built-in during the terminal expansion in the early 1970s. 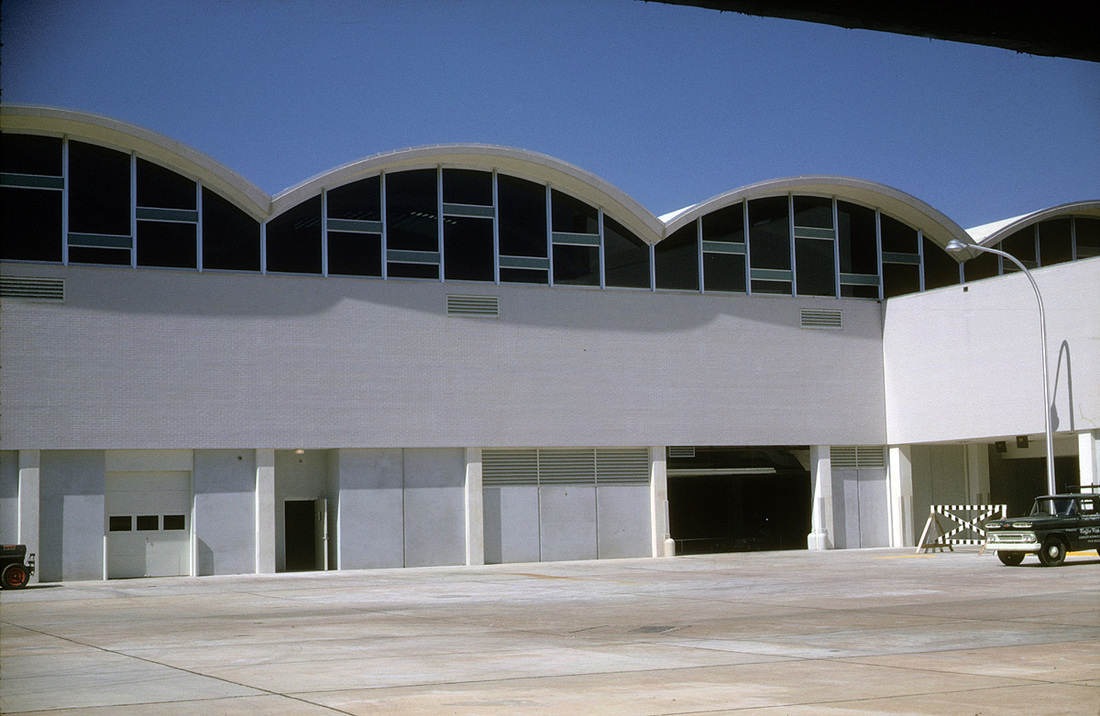 Another view of the control tower and administration building from the Eastern Air Lines side of the complex. The road in the foreground connected baggage claim to the aircraft apron. 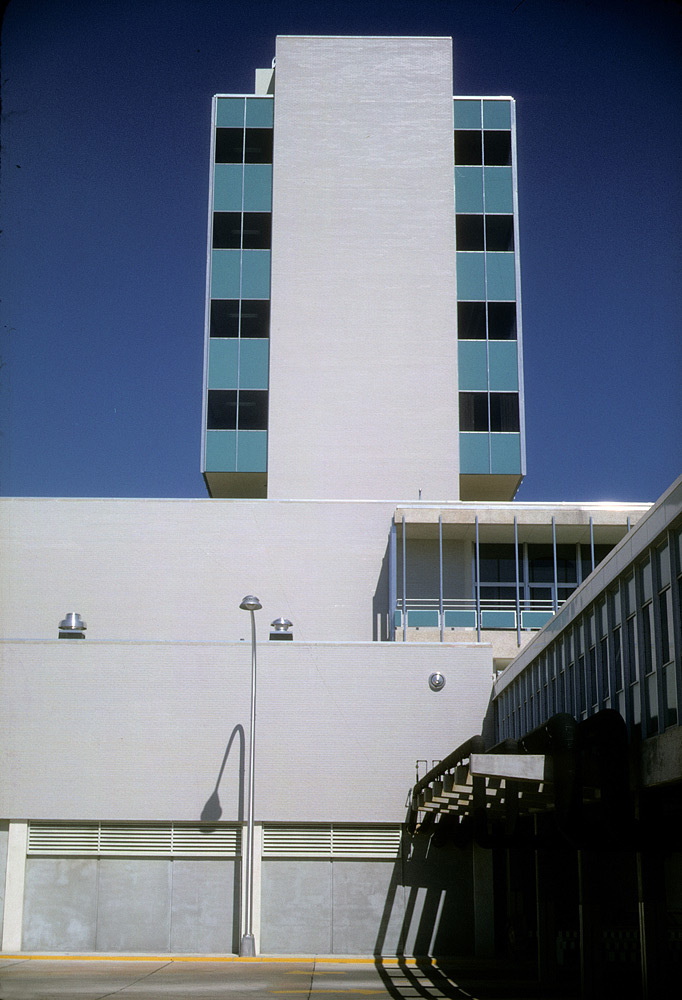 Here's a view of concourse B which was occupied solely by Eastern Air Lines. The temporary terminal was just beyond that and you can see the tail of a Delta Convair 880 off to the left. 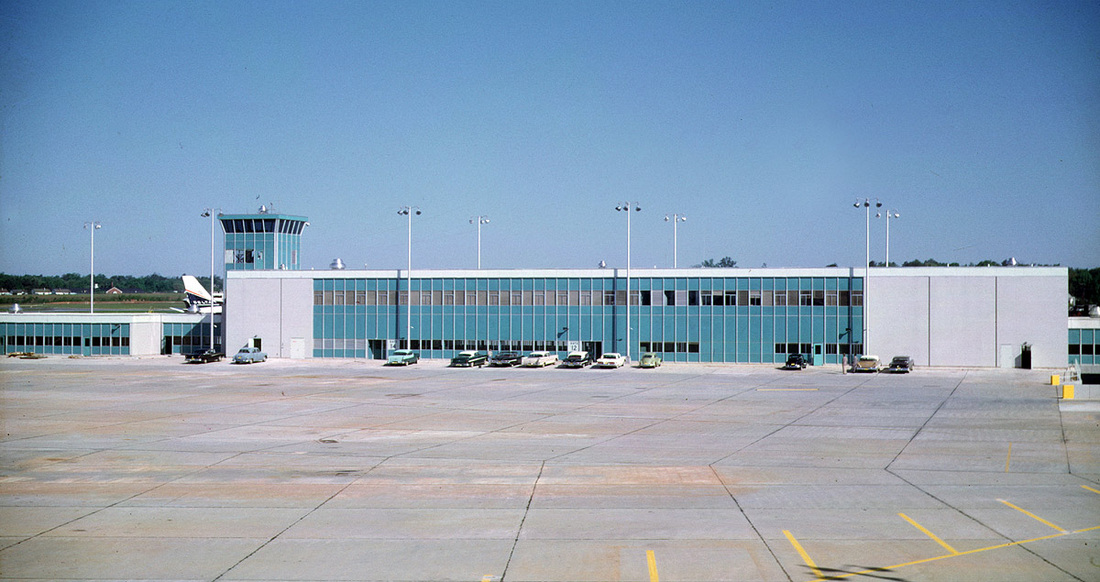 A great study in contrasts: the dark central concourse of the old temporary terminal jutting out into the parking lot of the bright and shiny 1961 terminal. Throughout the construction of the new facility, this remained a very busy aircraft ramp and planes taxiing to and from the runway had to navigate the gap between the end of the old concourse and the pedestrian ramp of the new building.

Much of the future parking lot was still part of the aircraft apron for the temporary terminal in this photo. Even though parking spaces were being painted on the asphalt, planes still used this area as a taxiway. You'll notice a string of portable taxiway lights on the left and the base of a light pole that presumably could not be installed yet because an aircraft wingtip might strike it. 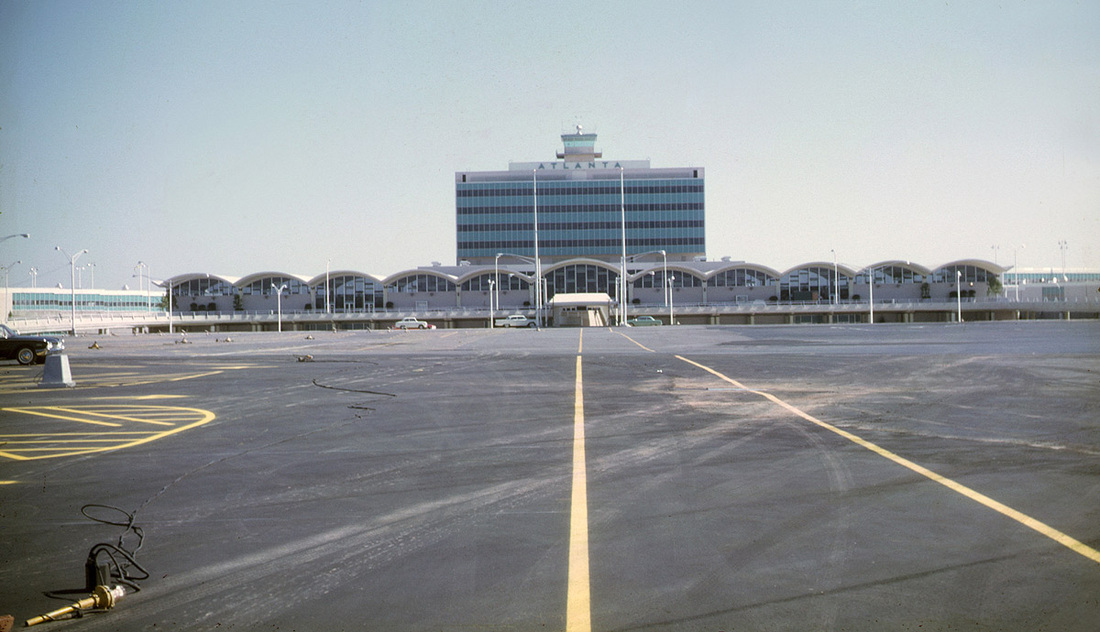 Thanks again to Brian Sassaman for sending these in!