Sunshine Skies takes a look back at the early decades of airline service at Augusta. 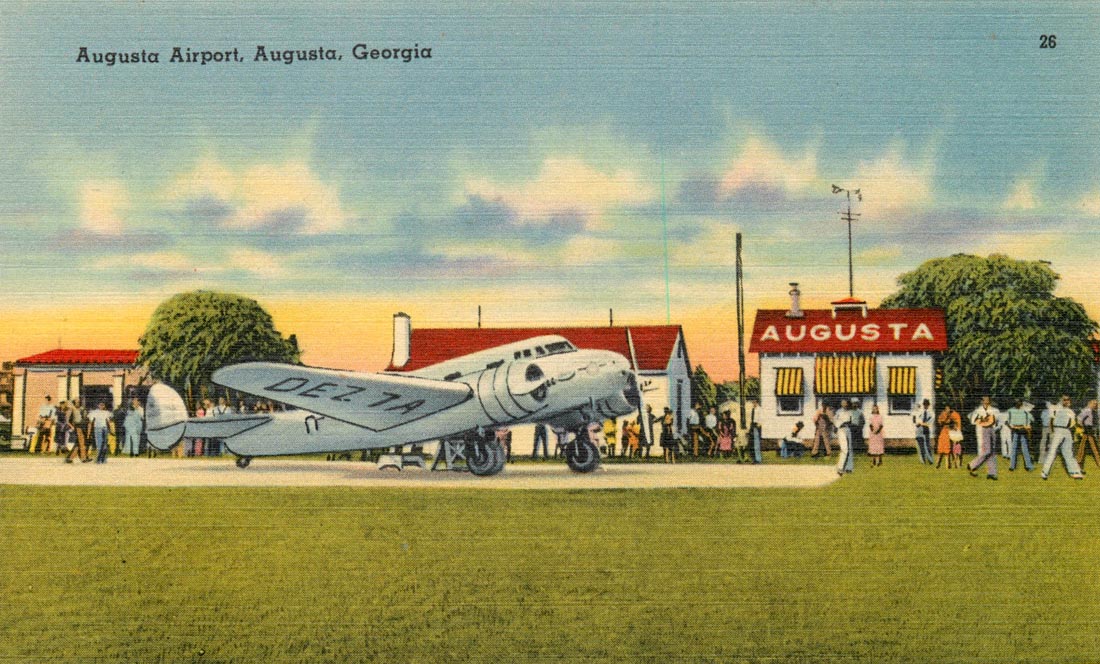 A ground level postcard view of a Delta Air Lines Lockheed 10 Electra at Augusta Daniel Field circa 1936-1940.
Eastern Air Transport, which eventually became Eastern Air Lines, was Augusta's first commercial airline and began flights into Daniel Field in 1931. The initial service only lasted a few months but was reinstated the following year when Eastern was awarded an air mail contract between Augusta and Charlotte with a connection to New York City. This first flight cover shows the inauguration of service on December 1, 1932 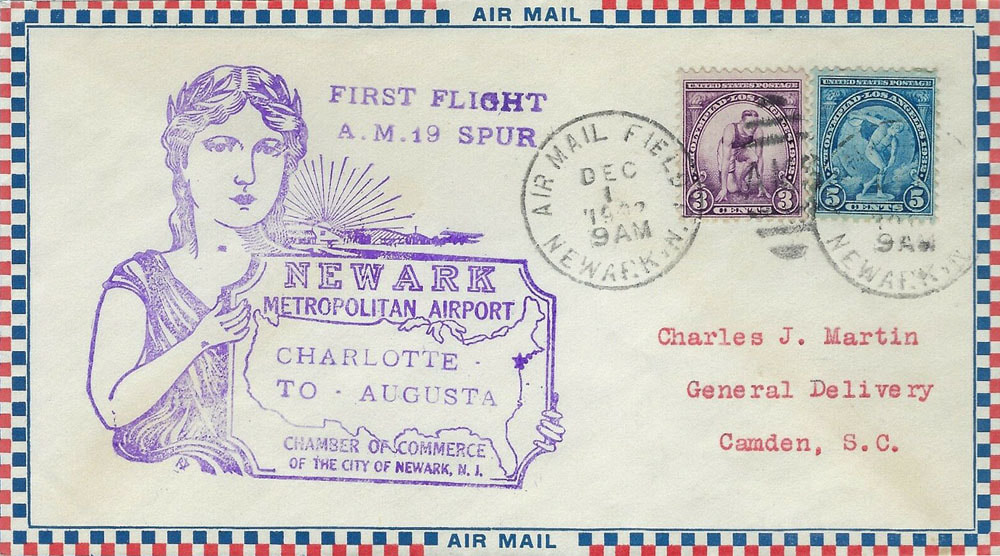 Eastern's July 1, 1933 timetable shows service between Augusta and Charlotte with stops in Columbia and Camden, SC. From the collection of Björn Larsson. 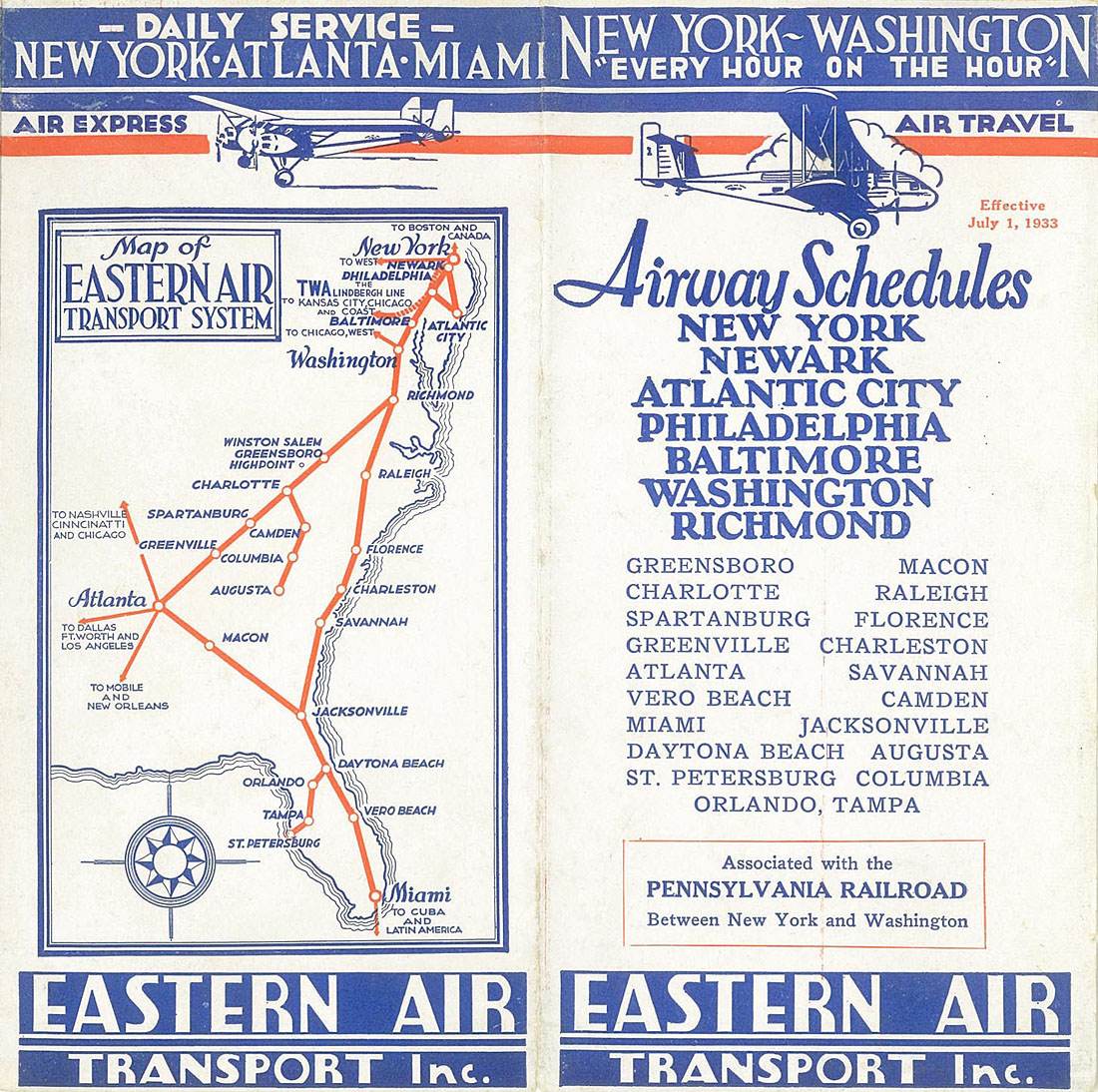 This excerpt from the July 1, 1933 timetable shows a single daily round-trip between Augusta and Charlotte with connecting flights between Charlotte and New York with multiple stops. The service was short-lived: six months later, Eastern's timetable effective January 1, 1934 shows that all flights at Augusta had been discontinued. Their July 1, 1935 timetable shows connecting service to Augusta via Delta Air Lines. 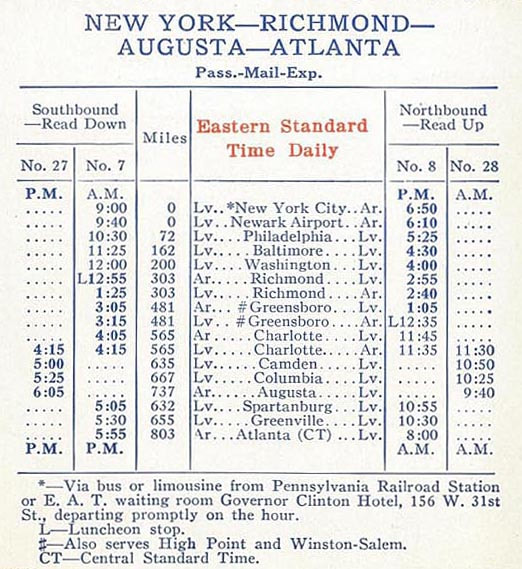 Delta Air Lines began service to Augusta Daniel Field on July 7, 1934 when they extended their Dallas to Atlanta Trans-Southern Route eastward to Charleston, SC. Initial flights were operated with Stinson T equipment along an Atlanta - Augusta - Columbia, SC - Charleston route.
This postcard view of Augusta Airport, postmarked September 4, 1942, shows two Delta Air Lines Lockheed Model 10-B Electras at the small terminal. The exact date of this photo is unknown but the aircraft at right, NC14992 (msn 1051) was delivered to Delta on February 2, 1936 and retired on March 2, 1941. 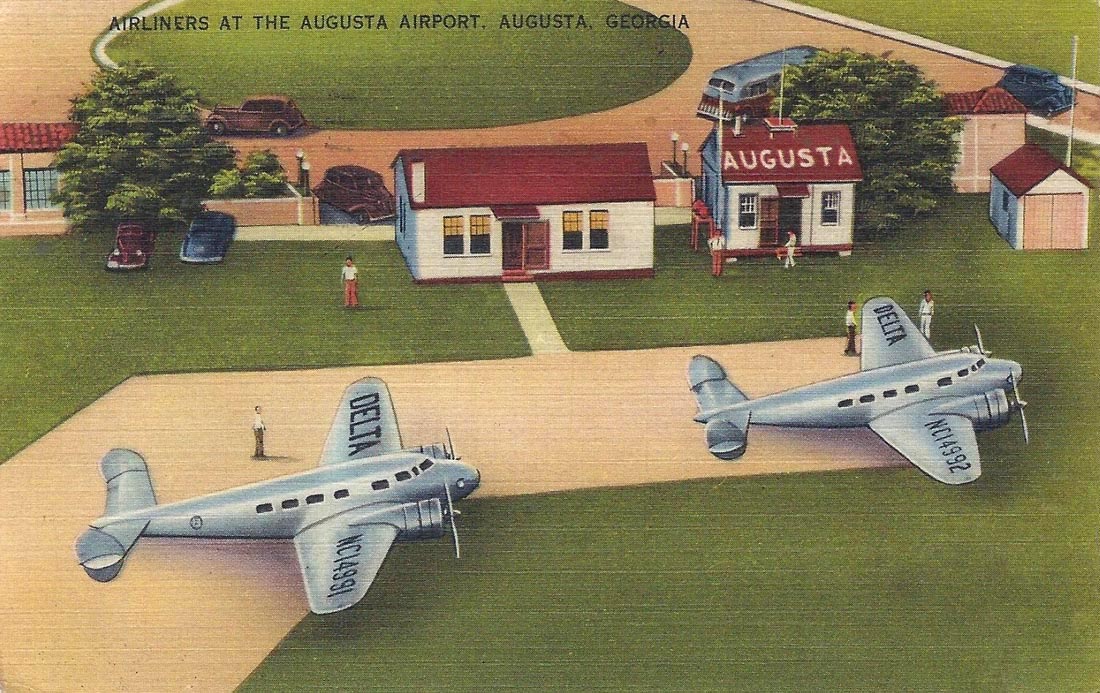 A major improvement project at Daniel Field in 1941 included the addition of 3 paved runways, new hangars, new passenger terminal and control tower. The terminal is the small dark building on the northeast corner of the field. 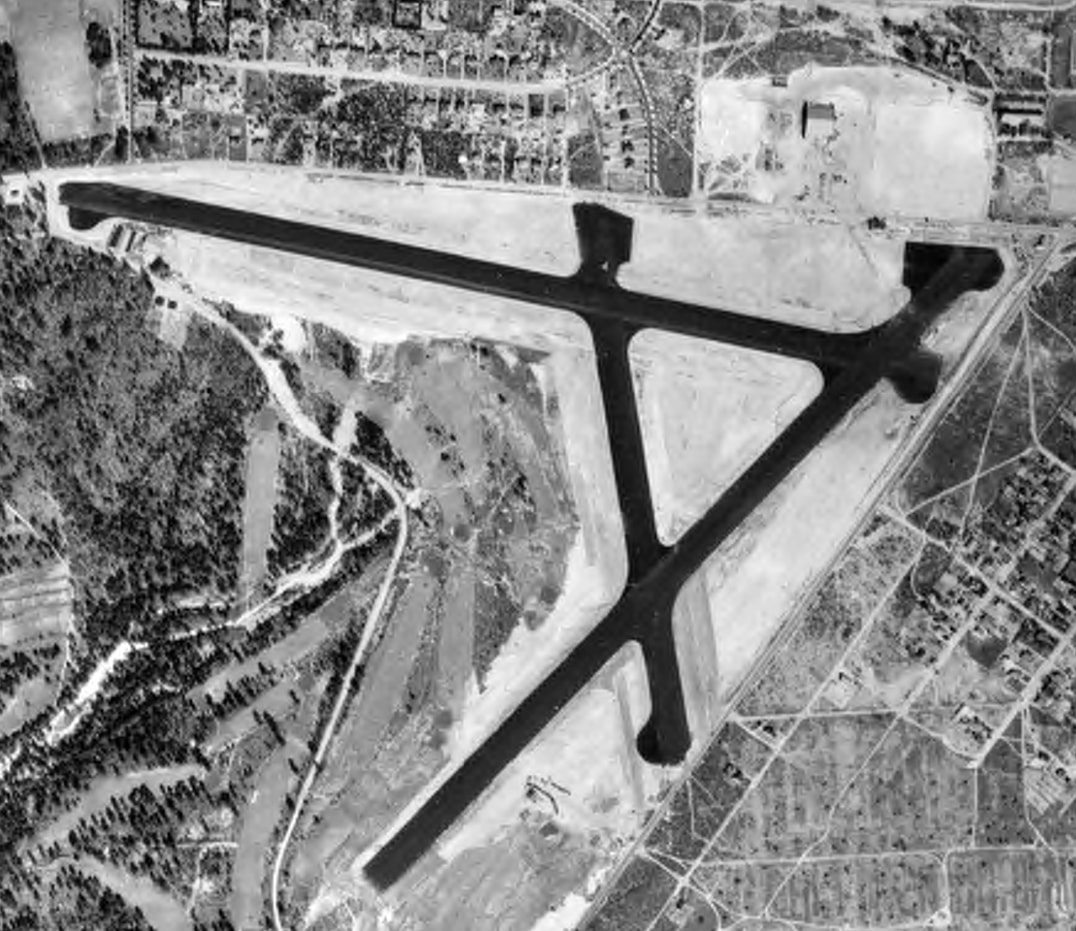 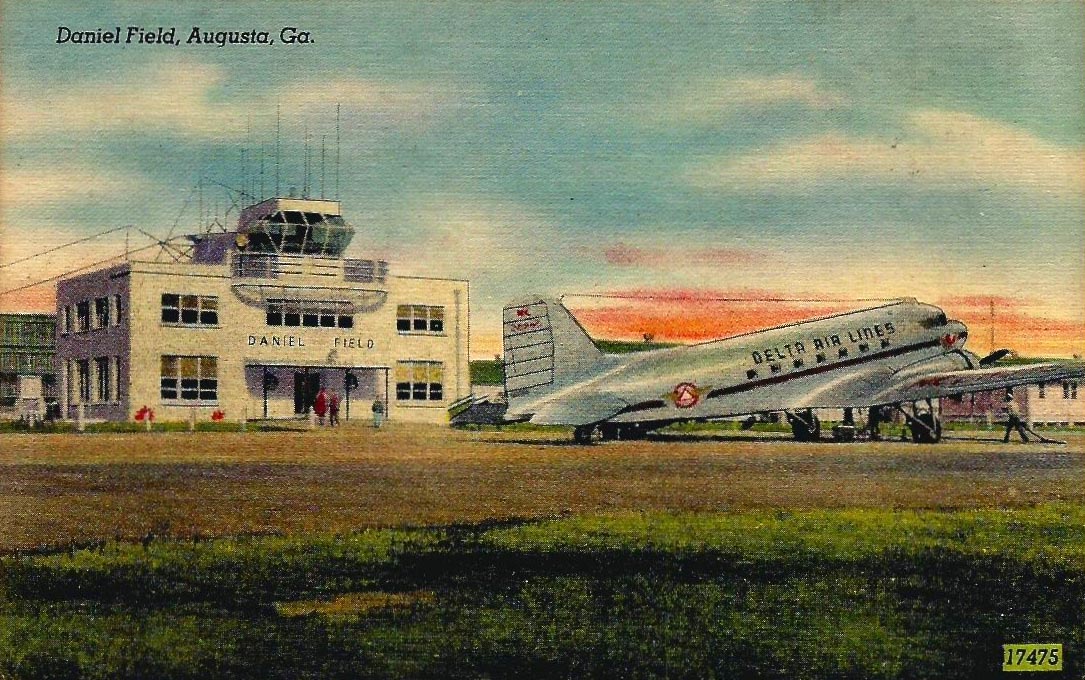 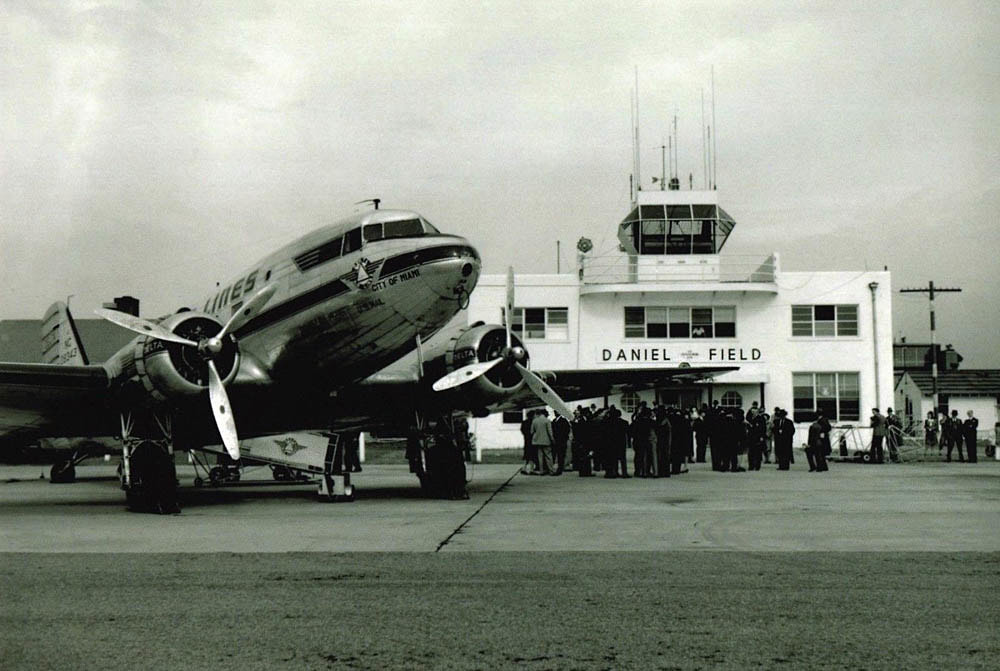 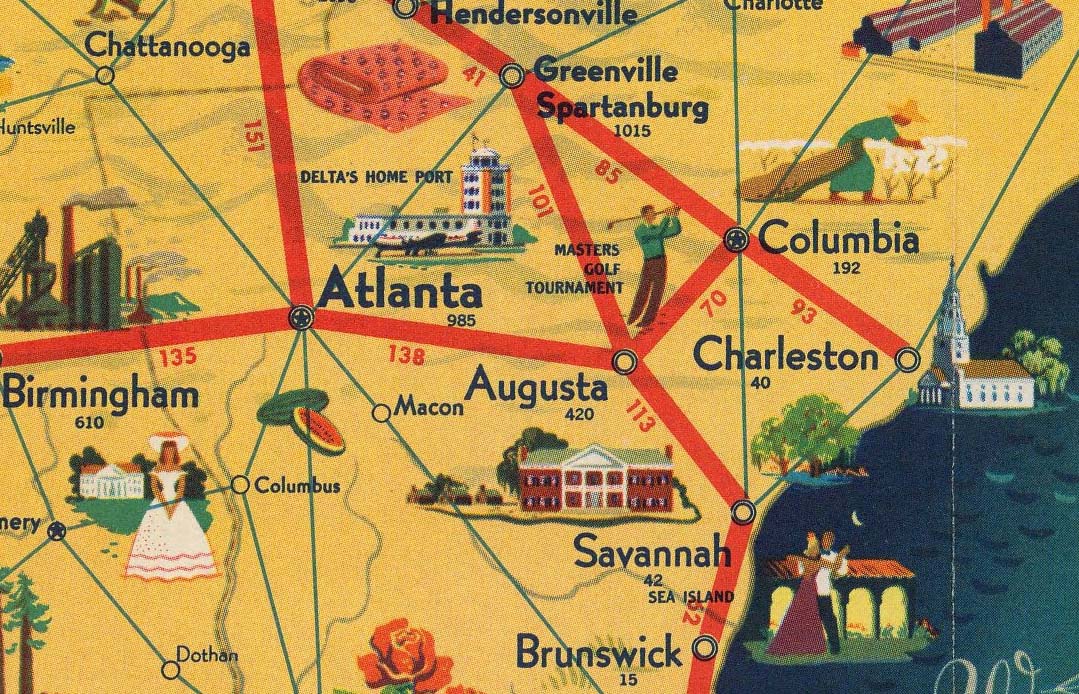 This excerpt from Eastern Air Lines' 1948 Annual Report notes that service to Augusta was reinstated on June 1, 1948.

Southern Airways began flying into Augusta on September 15, 1949. Their July 1, 1950 timetable shows two DC-3 flights a day, one in each direction along an Atlanta - La Grange - Columbus - Macon - Augusta - Charleston route. Courtesy of Björn Larsson at Timetableimages.com . This service was discontinued only a few years later.

The large 4-engine airliners that entered service following WWII required longer runways than their predecessors, and with no room for expansion at Daniel Field, airline operations were moved to nearby Bush Field in 1950. This early 1950s view shows a DC-3 (most likely flown by Delta) and an Eastern Martin 404 on the ramp. The main terminal is the building at center. 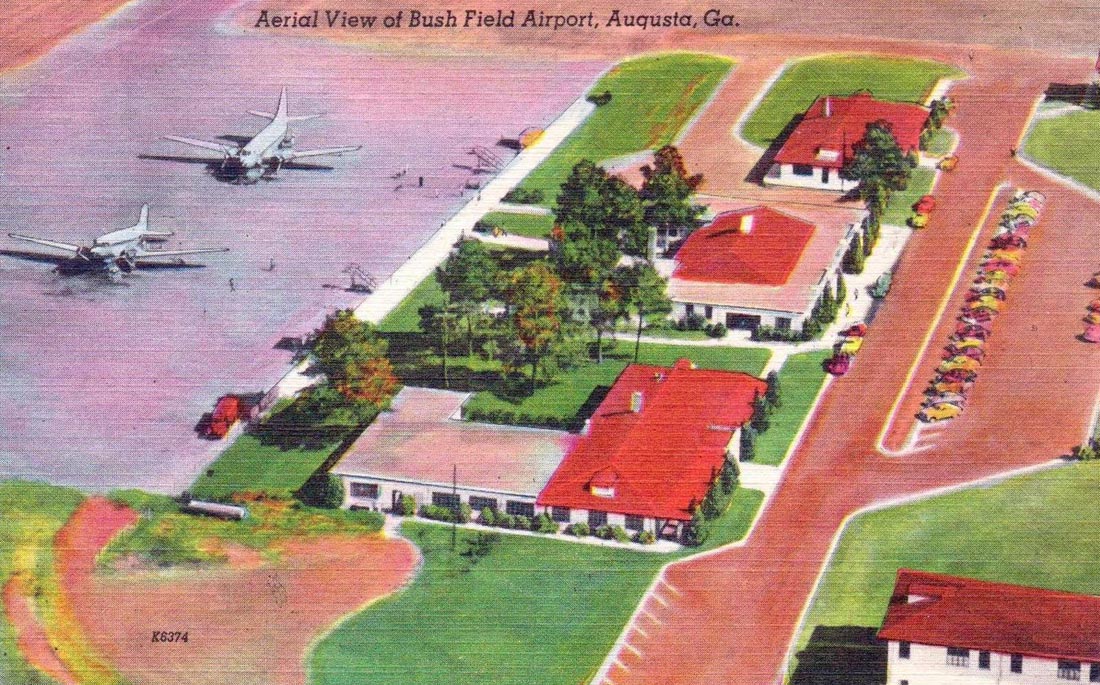 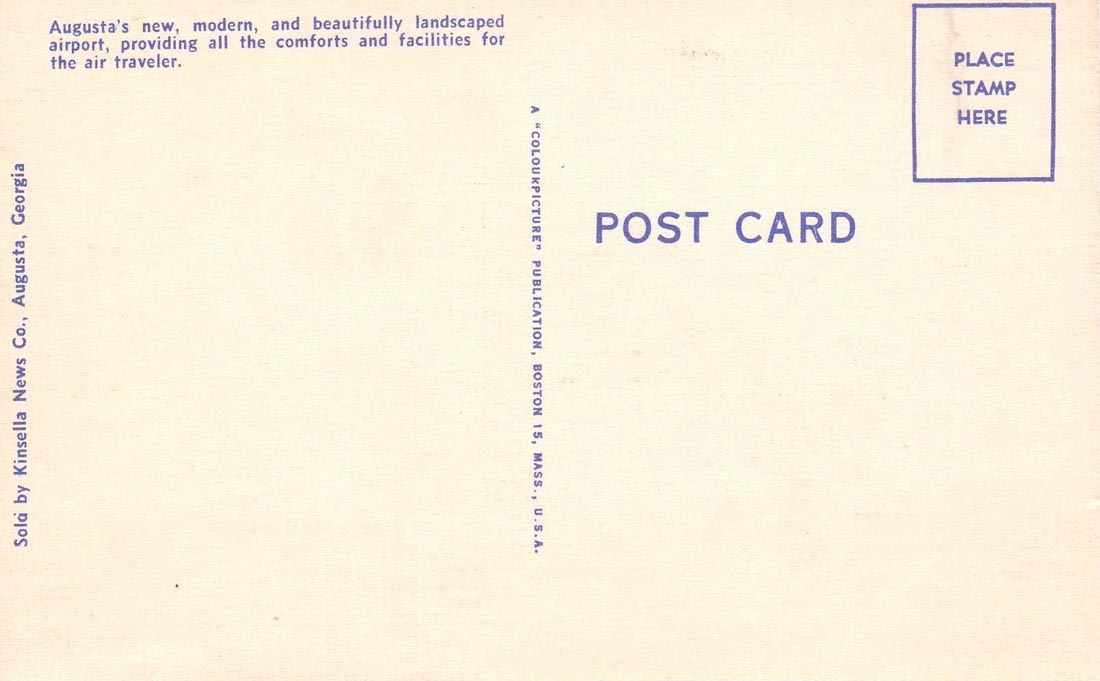 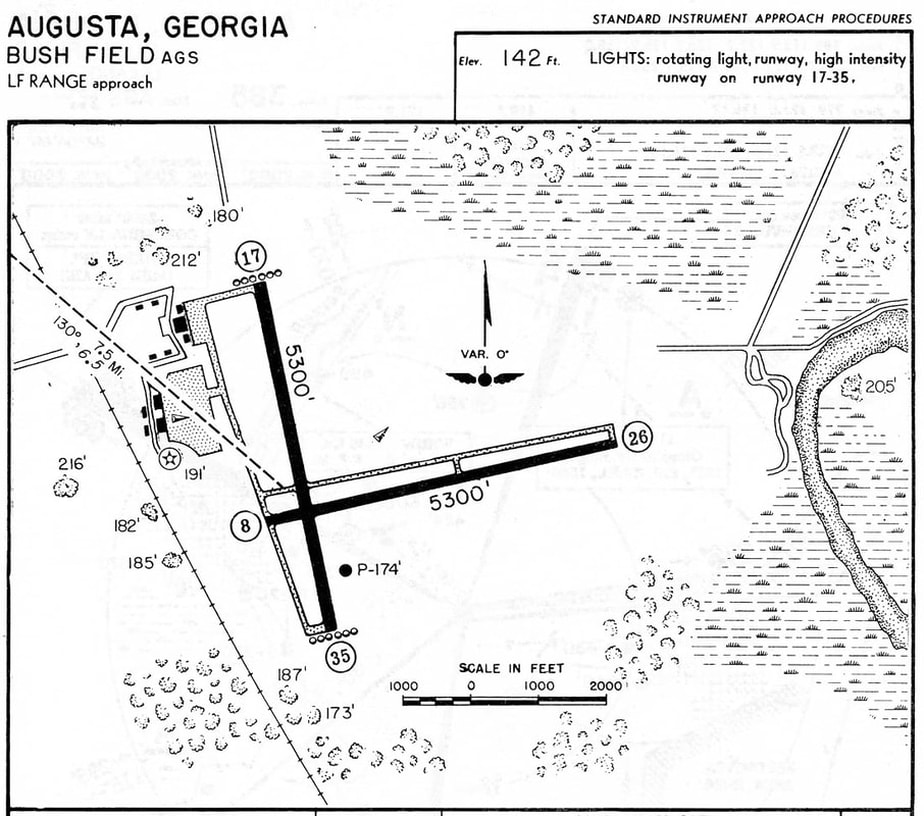 1950s postcard showing Eastern Martin 404 N484A (msn 14232) on the ramp at Augusta. This aircraft flew with Eastern from 1952 to 1963 and would later fly as N258S with Southern, Air South, Florida Airlines, Southern International and Air Florida Commuter. 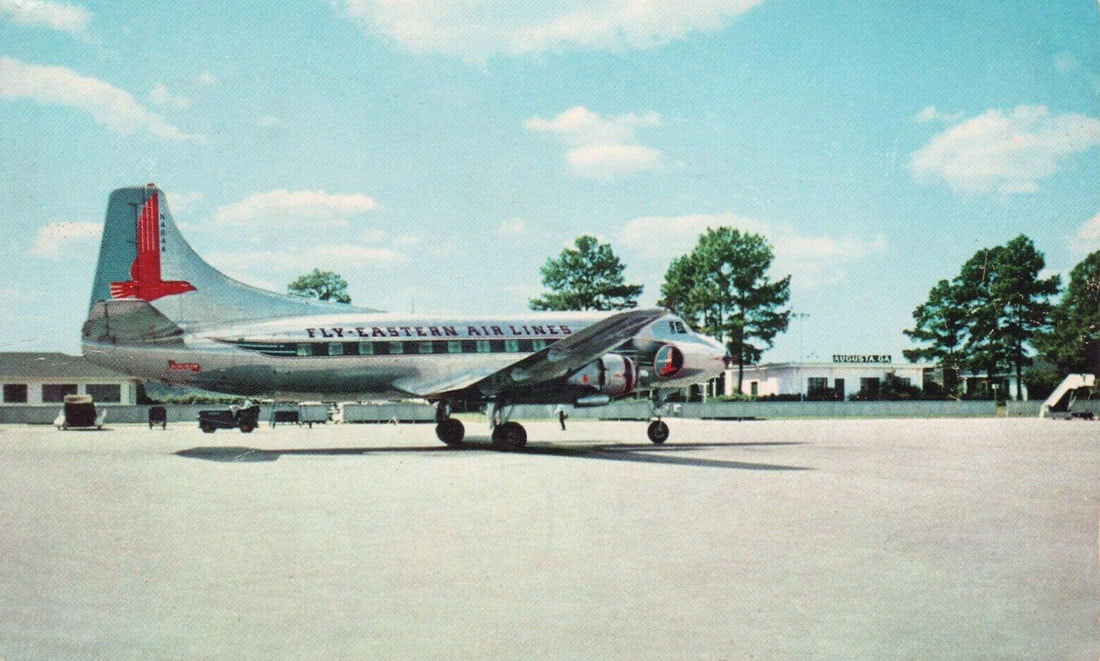 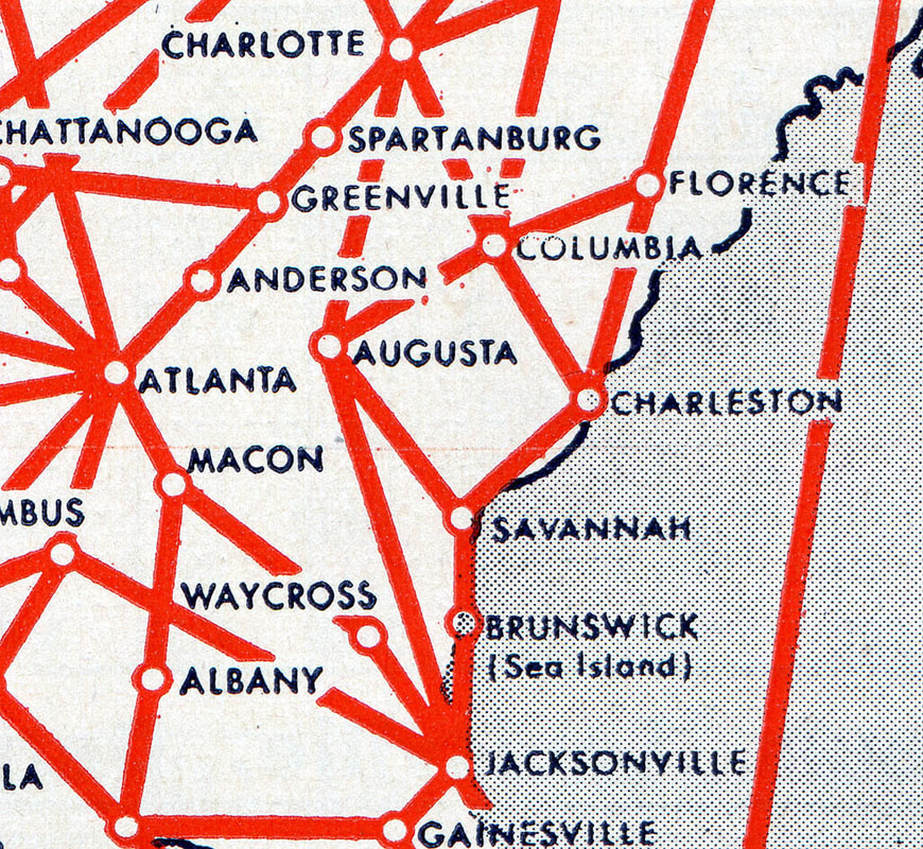 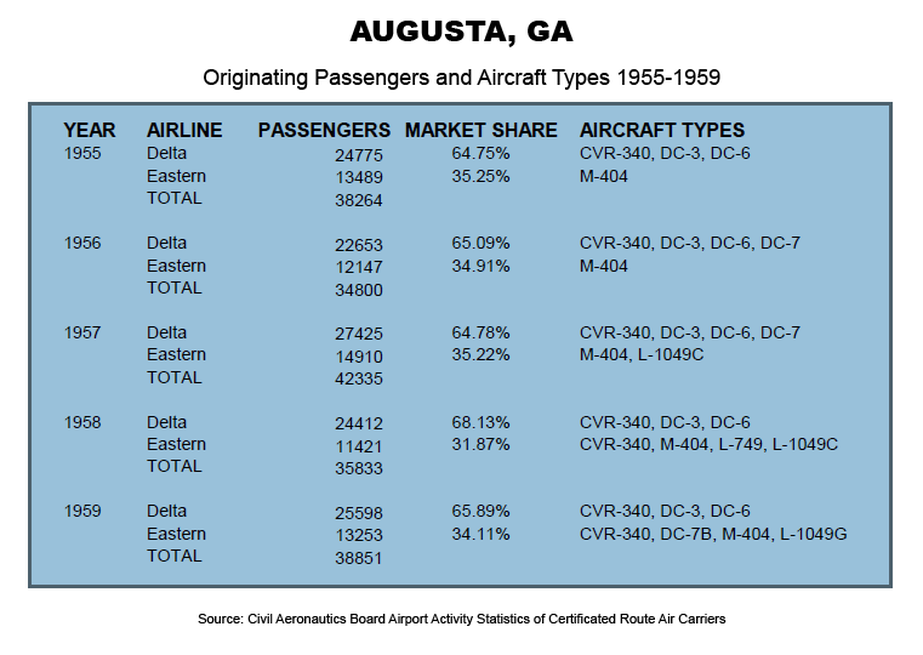 Mid-South Airways offered commuter flights on routes between Augusta and Savannah and Macon in late 1959 and early 1960. Courtesy of Don Henchel.

Piedmont Airlines inaugurated service to Augusta on June 25, 1962, the day it opened service between Atlanta and Baltimore. This postcard shows a Delta Convair 440 and Piedmont Martin 404 on the ramp. The Continental Airport Hotel is seen in the foreground.

Augusta was one of many stops along Southeastern Airlines' Columbia, SC - Atlanta route during 1963. These were flown with 4-passenger Piper Apaches. Thanks to David H. Stringer for sending in this page from the November 1963 Official Airline Guide.

Piedmont Airlines route map effective April 24, 1966 shows Augusta as one of many stops along a meandering Atlanta - Washington DC route. From the collection of Björn Larsson. 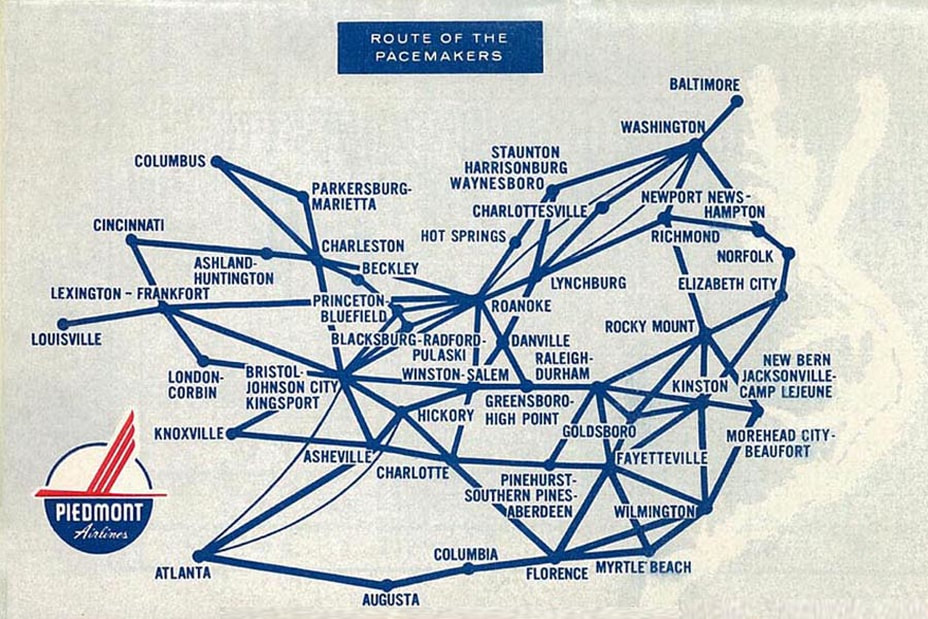 The May 1, 1966 issue of the Piedmont Airlines newsletter, The Piedmonitor, offered this glowing assessment of Augusta's Bush Field: "The airport itself is one of the most delightful places in the area. Resembling a country club more than an airport, Bush Field makes a grand impression on visitors. Tastefully laid out with attractive shrubbery native to the locale, residents often drive out to the airport for dinner. And the food is good!"

This is another postcard view of the airport from the early 1960s. 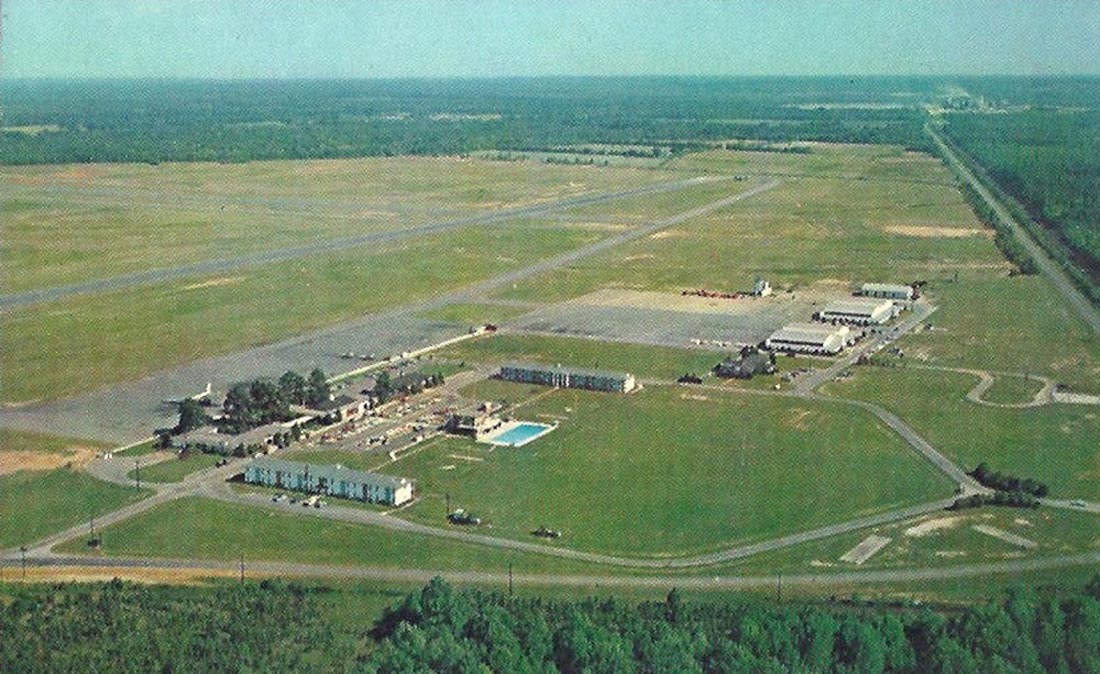 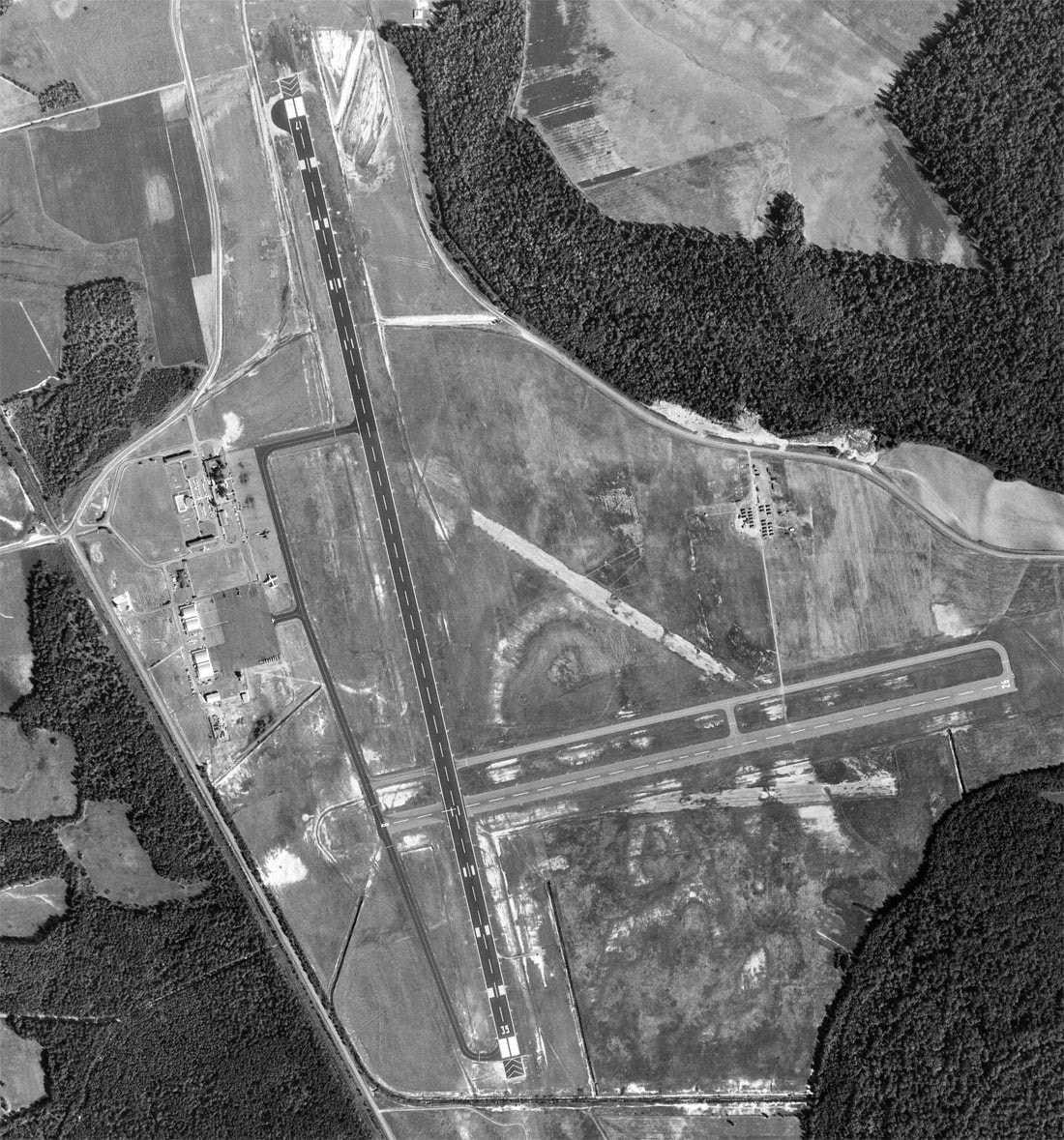 This photo from the May 1, 1966 issue of The Piedmonitor employee newsletter shows airport agents enjoying the "country club atmosphere" of Bush Field. 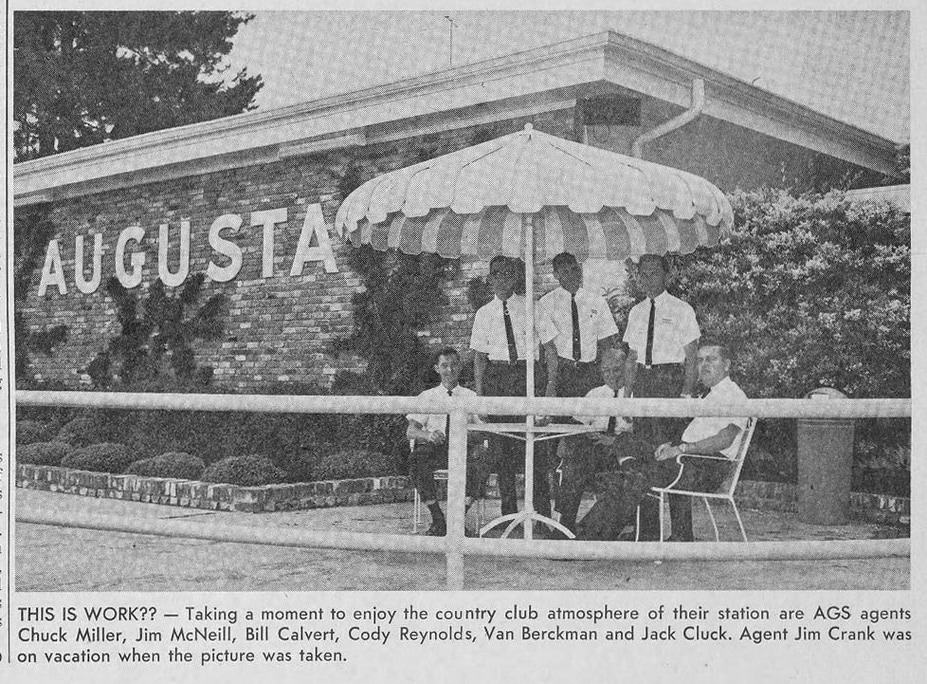 Another great quote from the May 1, 1966 Piedmonitor: "Vacationers flying into Augusta land just across the street from the delightful Continental Airport Hotel. Overheard in the airport restaurant, a visitor commented, 'This is the only airport in the world where you can be floating around in the pool as you watch your plane come in and still have time to dress and board your flight.'"

This mid 1960s postcard shows a Delta Convair 440 and an Eastern Lockheed L-188 Electra with the new "hockey stick" paint scheme on the ramp. 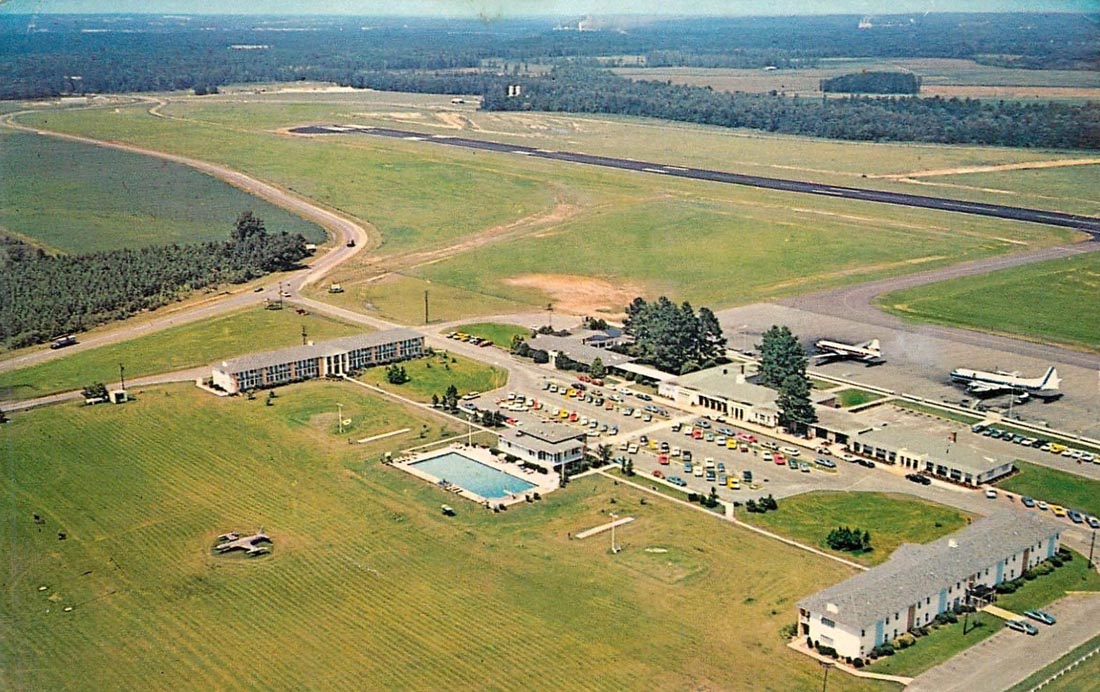 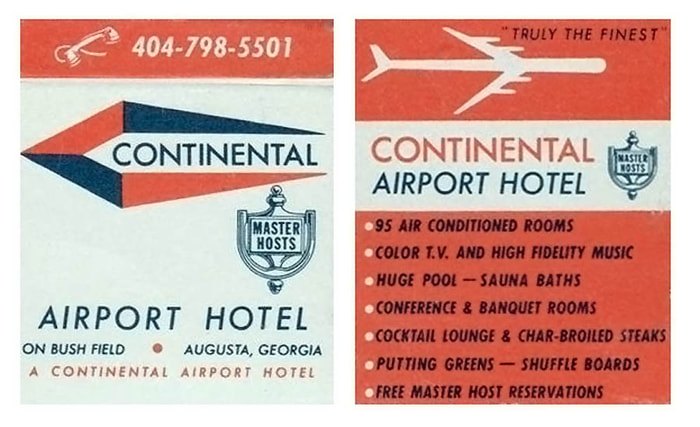 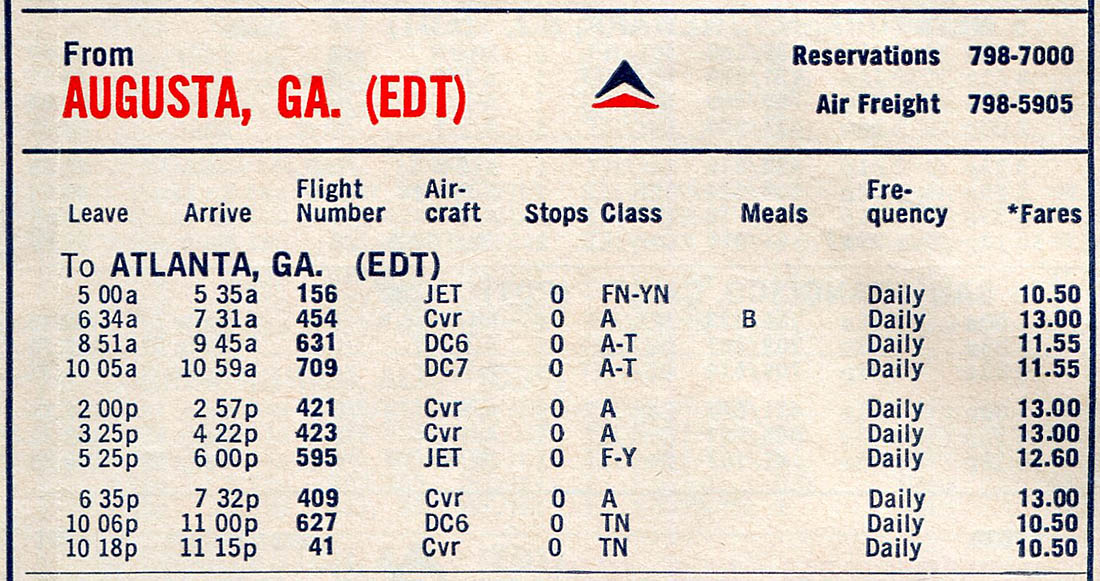 Nationwide Airlines Southeast operated an average of 3 round-trips a day between Augusta and Atlanta in 1967 and 1968 using Beechcraft Queen Airs and Beech B-99s.

Nationwide became Air South in 1968 and 2 daily round-trips were maintained between Augusta and Atlanta until service was suspended on September 1, 1969.