HISTORY OF AIRLINE SERVICE AT CHATTANOOGA

Part Two: 1950s-1964
Large 4-engine DC-4s and DC-6s were the airliners of choice following the war and the older, smaller DC-3s were relegated to shorter local runs. This circa 1952 postcard view of Douglas DC-4s of Delta and Capital Airlines (formerly Pennsylvania Central) on the ramp at Chattanooga also shows the control tower and additions to the original 1930 terminal. One funny note about the Capital DC-4: notice that it appears to have rectangular windows. Newer DC-6s were in service with other airlines by that time and many customers didn’t want to fly in the older round window DC-4s. Capital fooled customers by painting rectangular window panes making them appear to be the newer DC-6s. 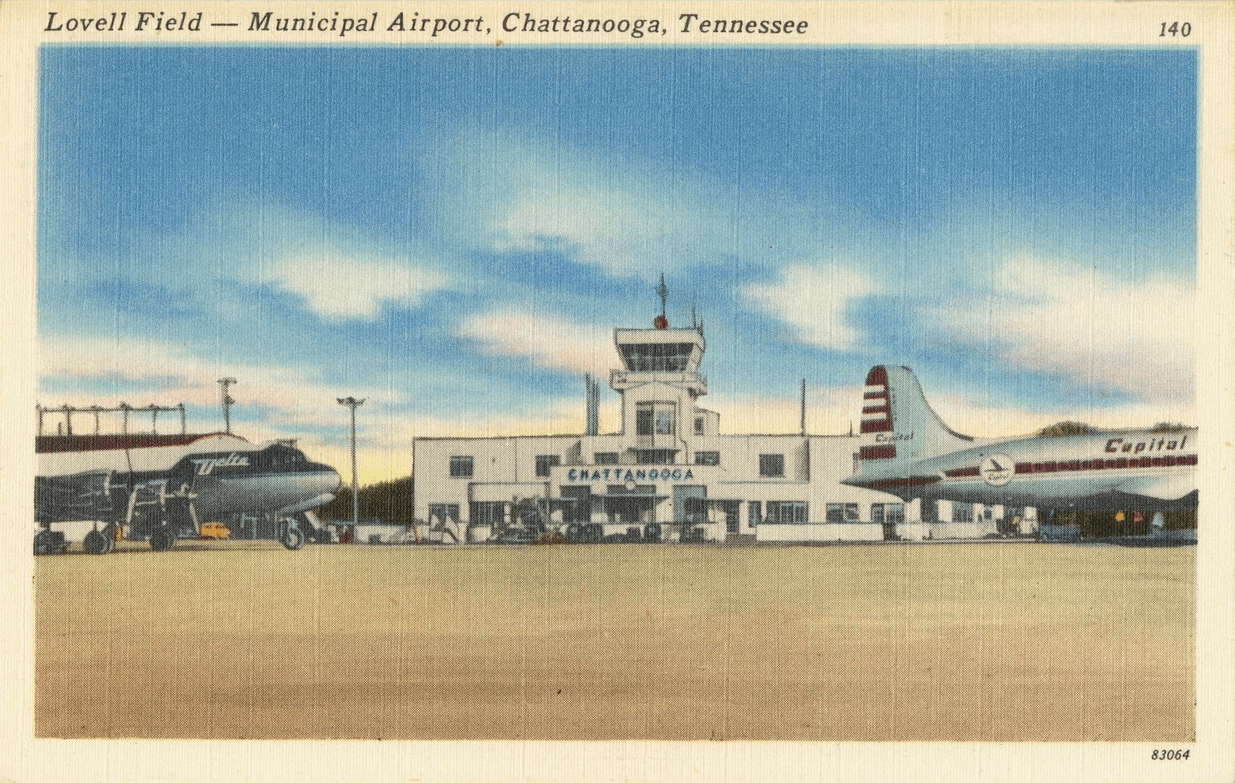 The above postcard was certainly a touched up version of this photograph taken in 1952. From the collection of the Chattanooga Public Library. 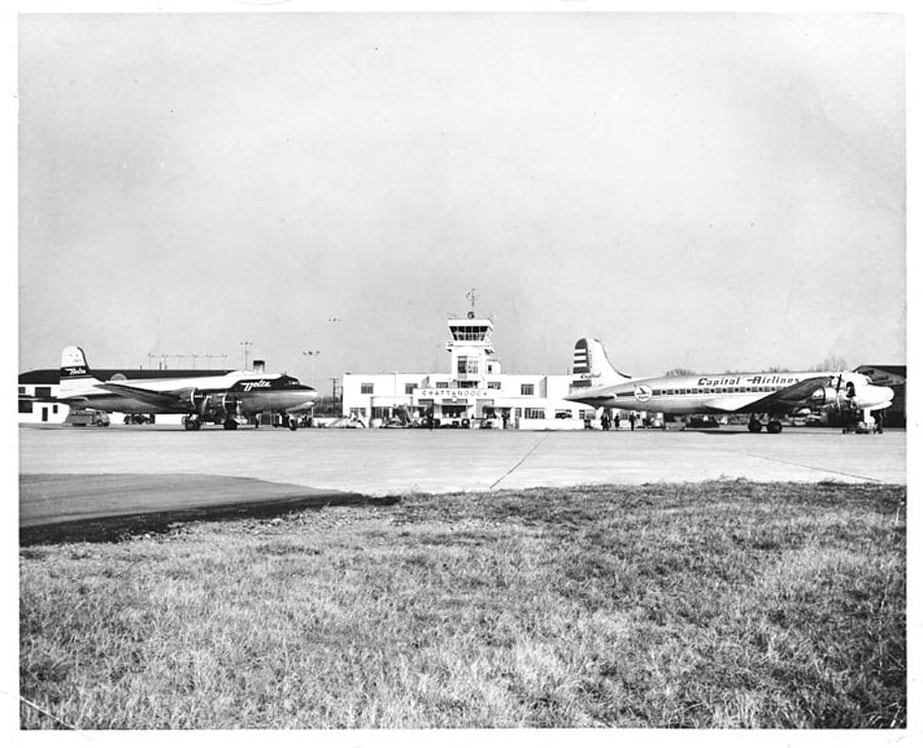 A group enjoying the view from the observation deck at the old Chattanooga terminal, circa early 1950s. Photo courtesy of Bill Peterson. 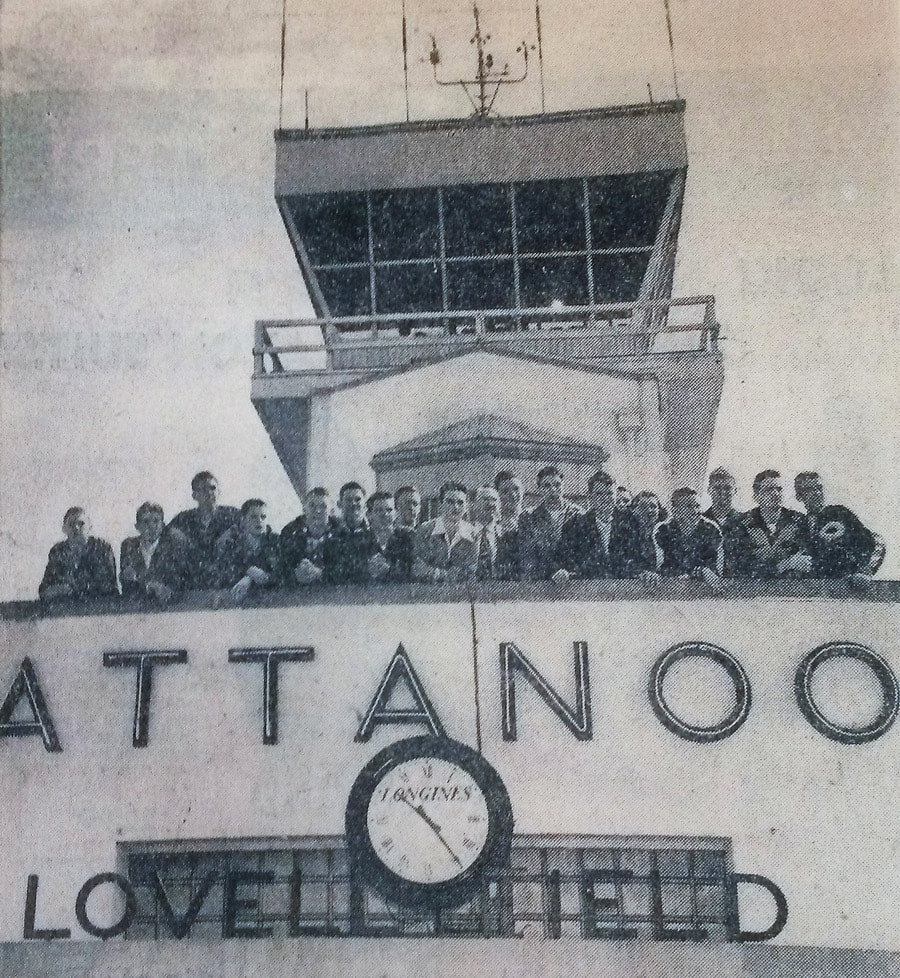 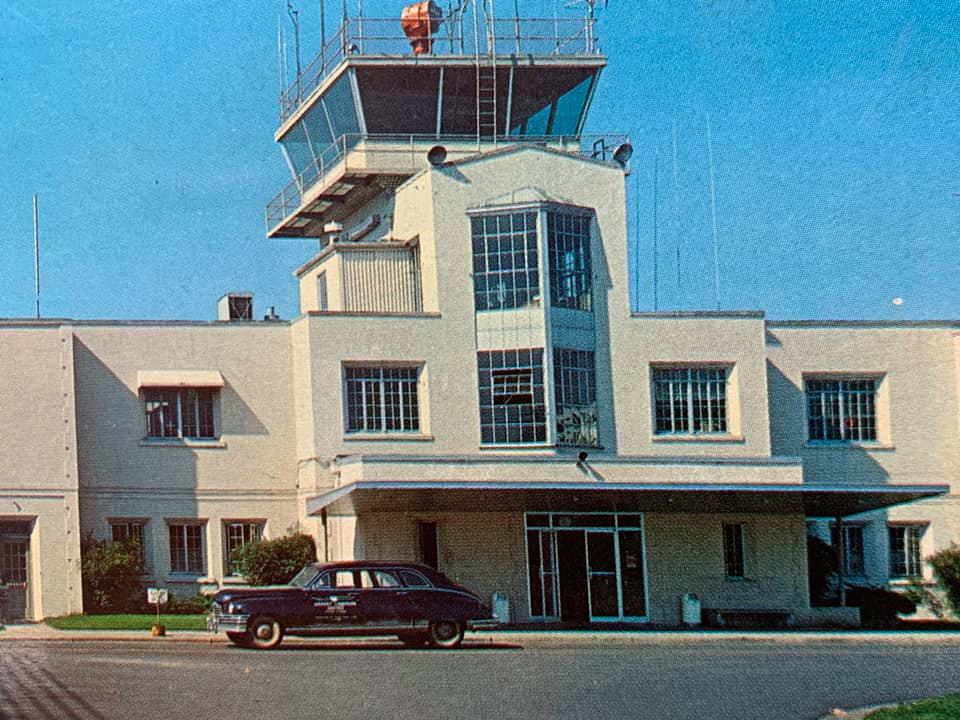 The terminal was expanded again in 1955 and this addition contained gate space on the ground floor and a restaurant and office space on the second floor. Photo courtesy of Bill Peterson. 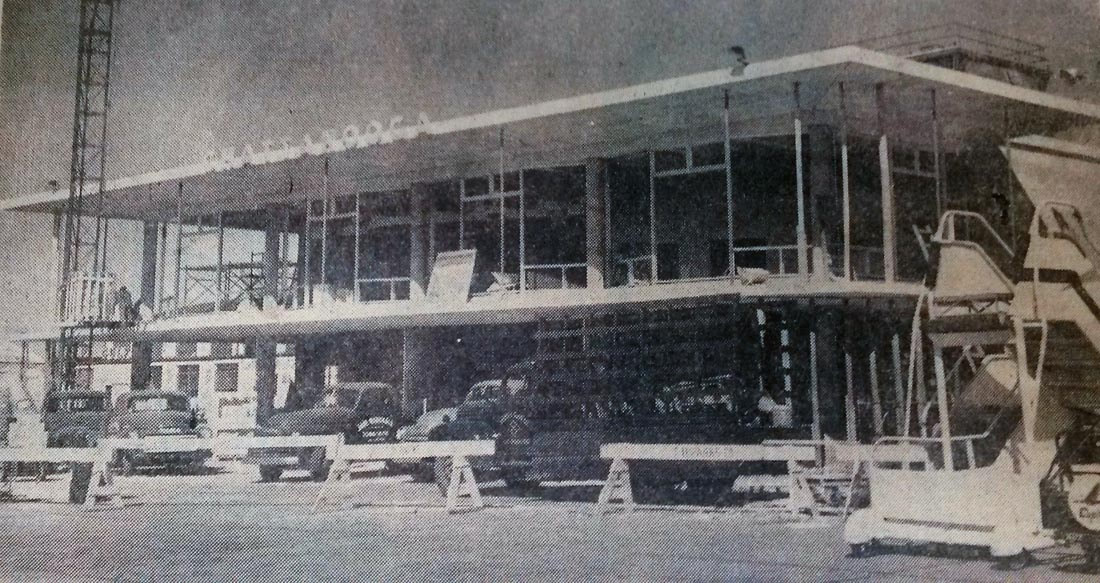 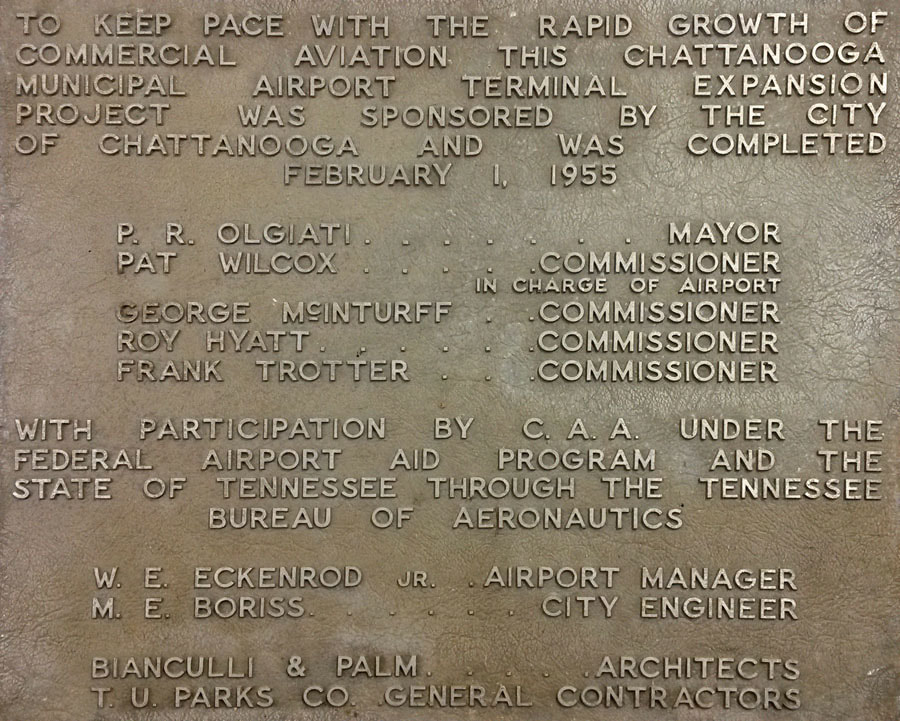 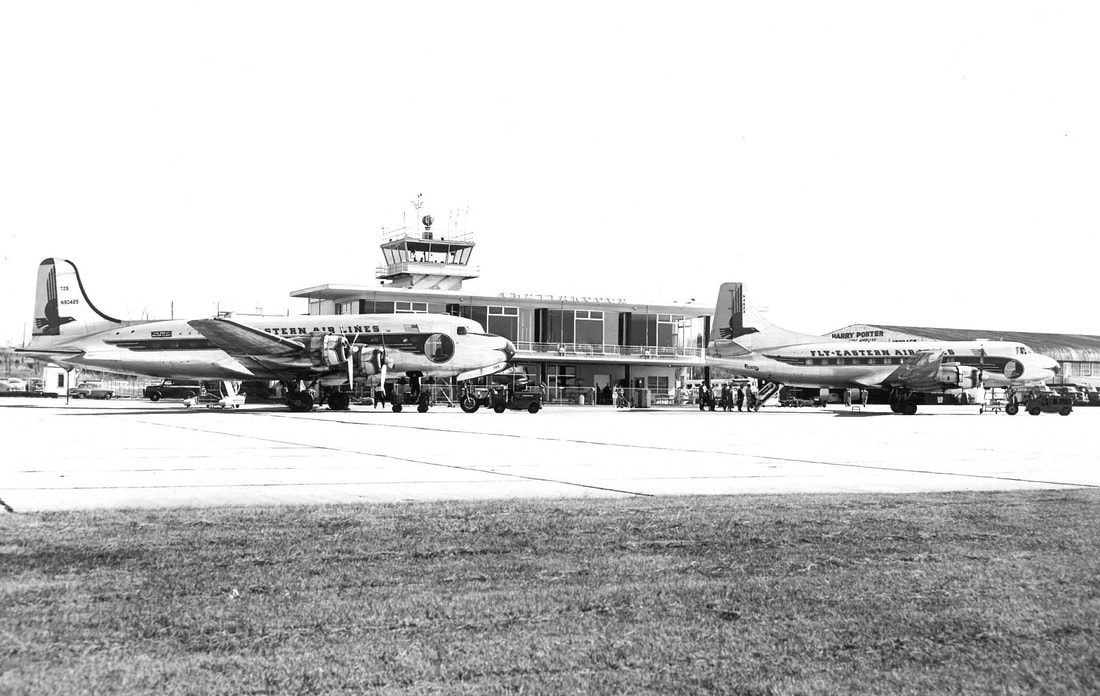 Lovell Field airport diagram revised May 17, 1955. From the collection of John Hewson. 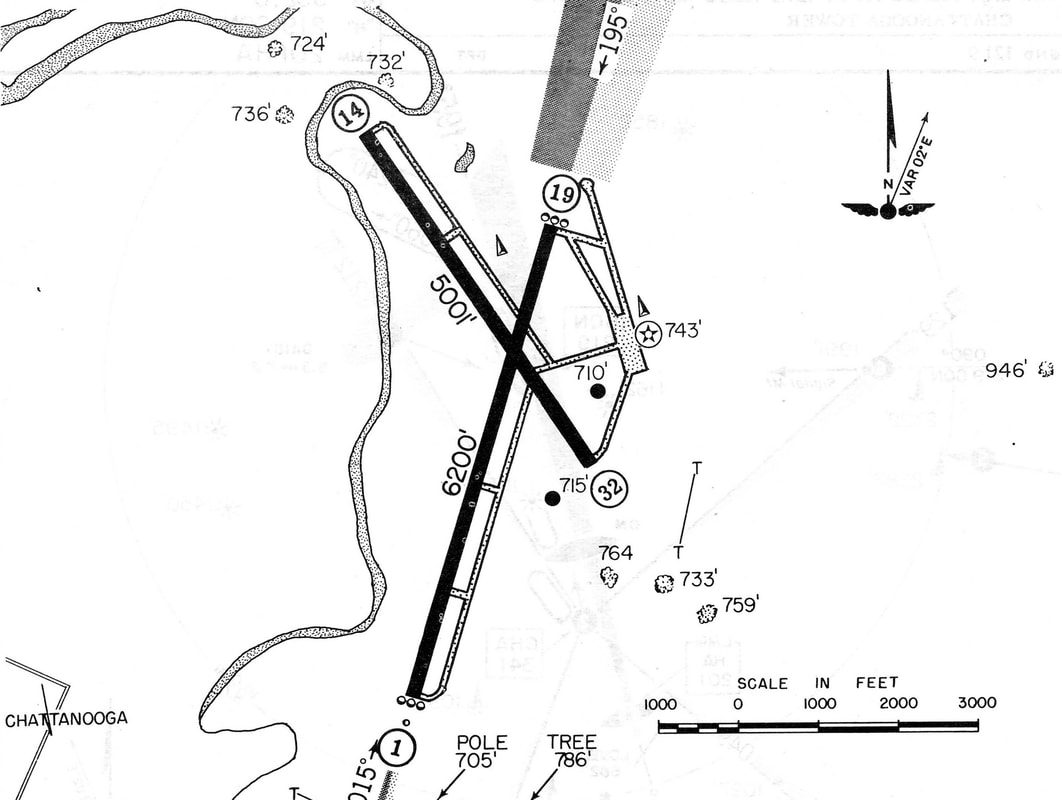 Braniff International Airways inaugurated DC-6 service between Dallas and New York via Chattanooga in 1956. The service was not a success and Braniff left the city in 1962. From the collection of Kim Hackett via TimetableImages.com.
Stewardess and unidentified pooch pose with a Braniff International Convair 340 on the Chattanooga ramp. The nose of a Capital Airlines Viscount turboprop can be seen in the background. From the Picnooga collection. 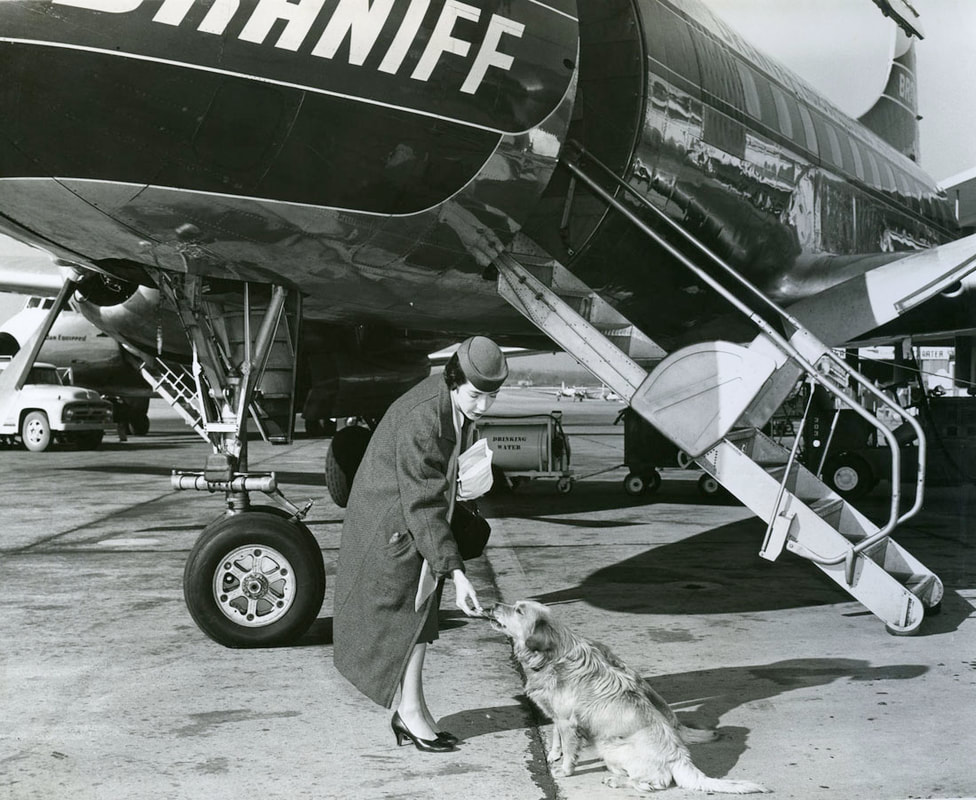 Aerial view of Lovell Field circa 1956 facing west. The quarry seen at center right was used for fill during the WPA funded airport expansion in the 1930s. From the Picnooga collection on Flickr. 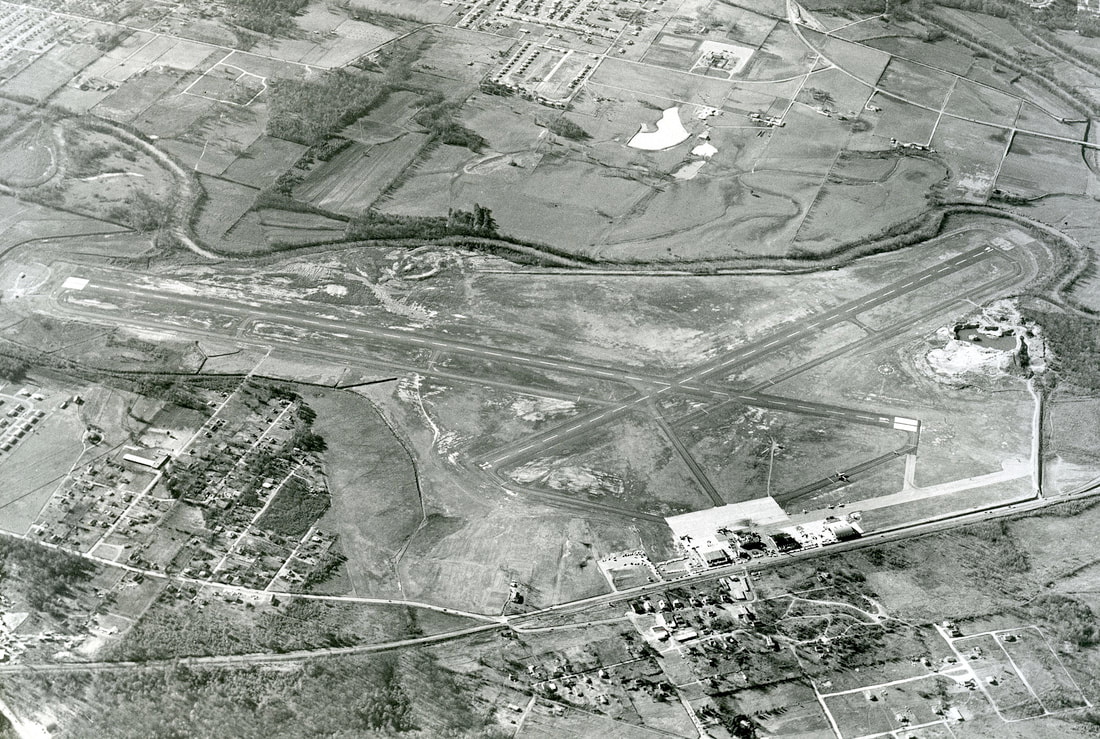 Close up of the terminal area from the same photo showing an Eastern Air Lines Martin 404 on the ramp and what looks like a Braniff International Convair 340 on the taxiway at top right. 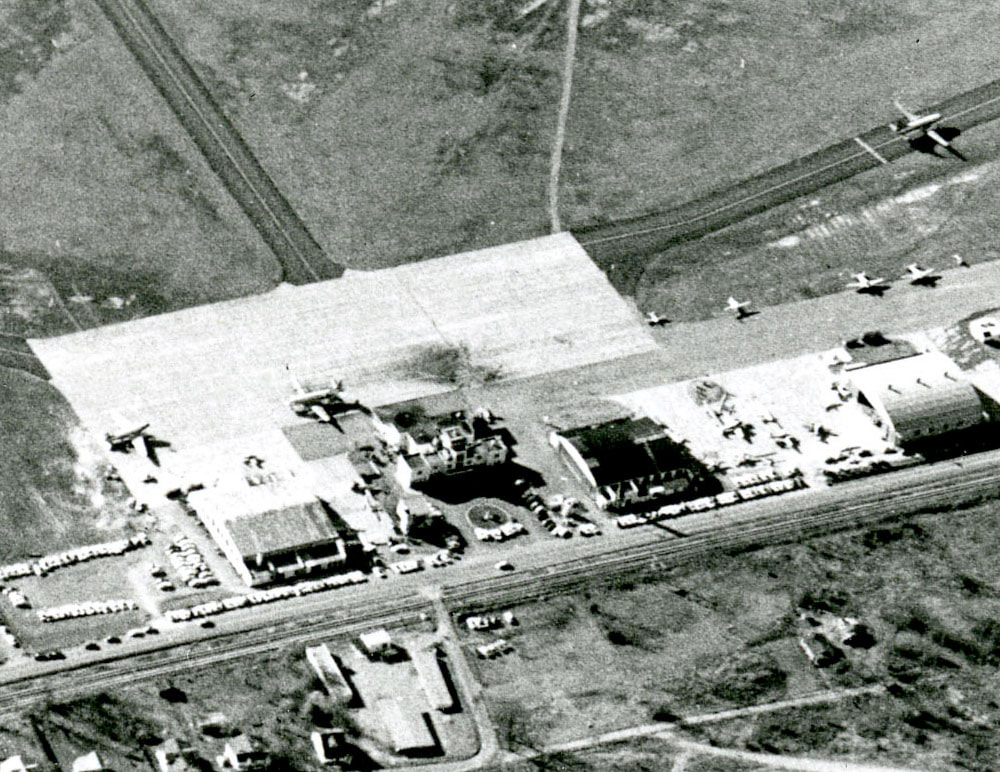 Four airlines served Chattanooga in 1956: Braniff, Capital, Delta and Eastern. This excerpt from the 1956 edition of Airport Activity Statistics of Certificated Route Air Carriers provides a great snapshot of CHA and shows the number of departures and enplaned passengers for the year. Eastern Air Lines boarded more passengers than the other three carriers combined.

Another detail from the same edition showing the types of aircraft flown at Chattanooga that year. Everything from pre-war DC-3s to the newest DC-7s, Constellations and turboprop Viscounts.

Tennessee-based Southeast Airlines offered commuter service between Chattanooga and various points across the state in 1958. Timetable from the collection of Bjorn Larsson, photo from the Picnooga collection on Flickr.
Southeast Airlines route map from their May 27, 1958 timetable. When the airline stopped flying in 1960, these routes were awarded to Southern Airways.

Lovell Field postcard circa 1958 showing an Eastern L-1049 Constellation and a Capital Airlines Vickers Viscount at the terminal. From the collection of Flickr member mpar21. 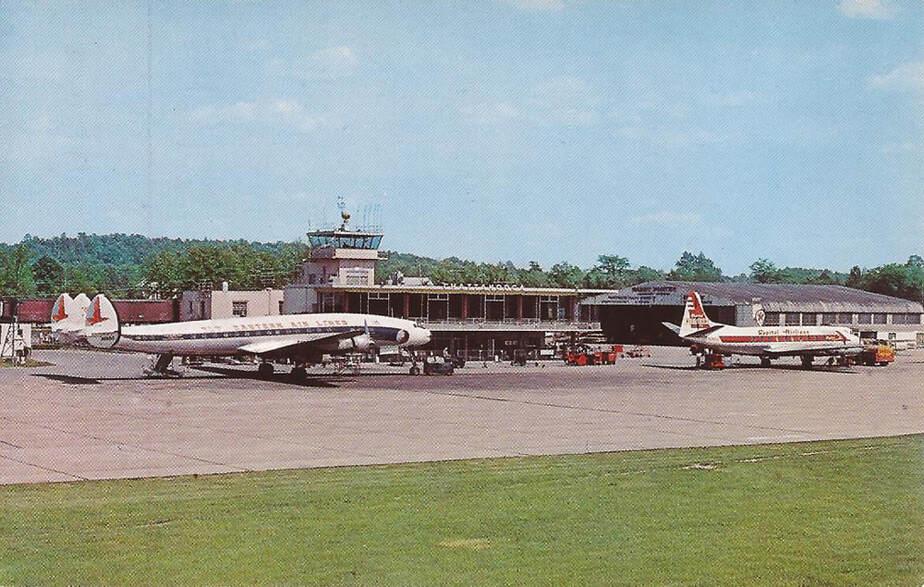 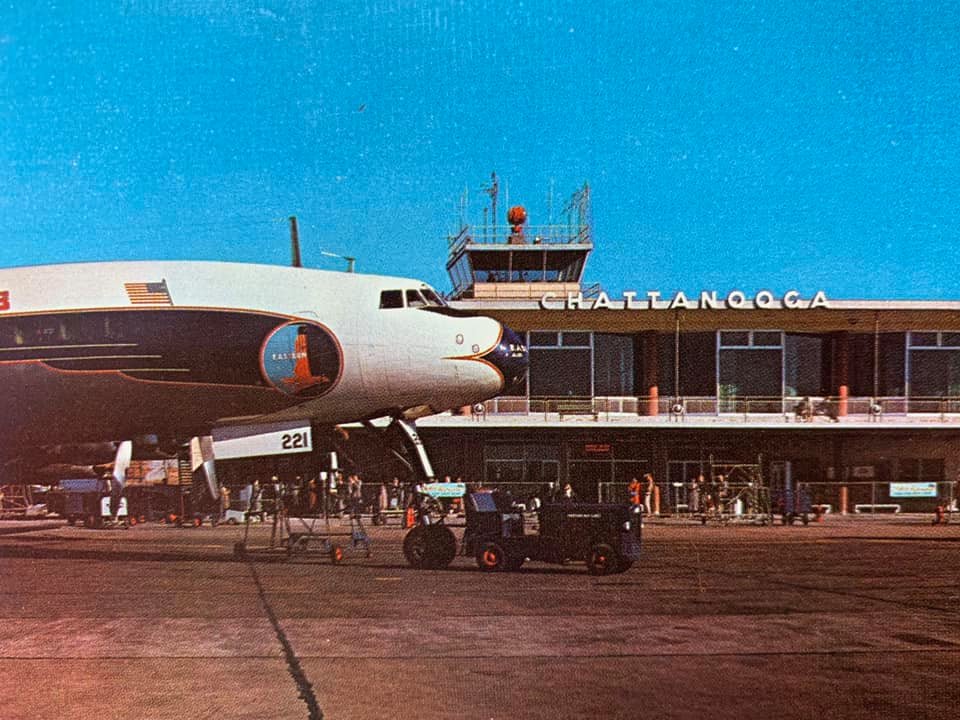 Following the demise of Southeast Airlines in 1960, Southern Airways was awarded routes connecting a half dozen cities across Tennessee. From the collection of Bjorn Larsson. 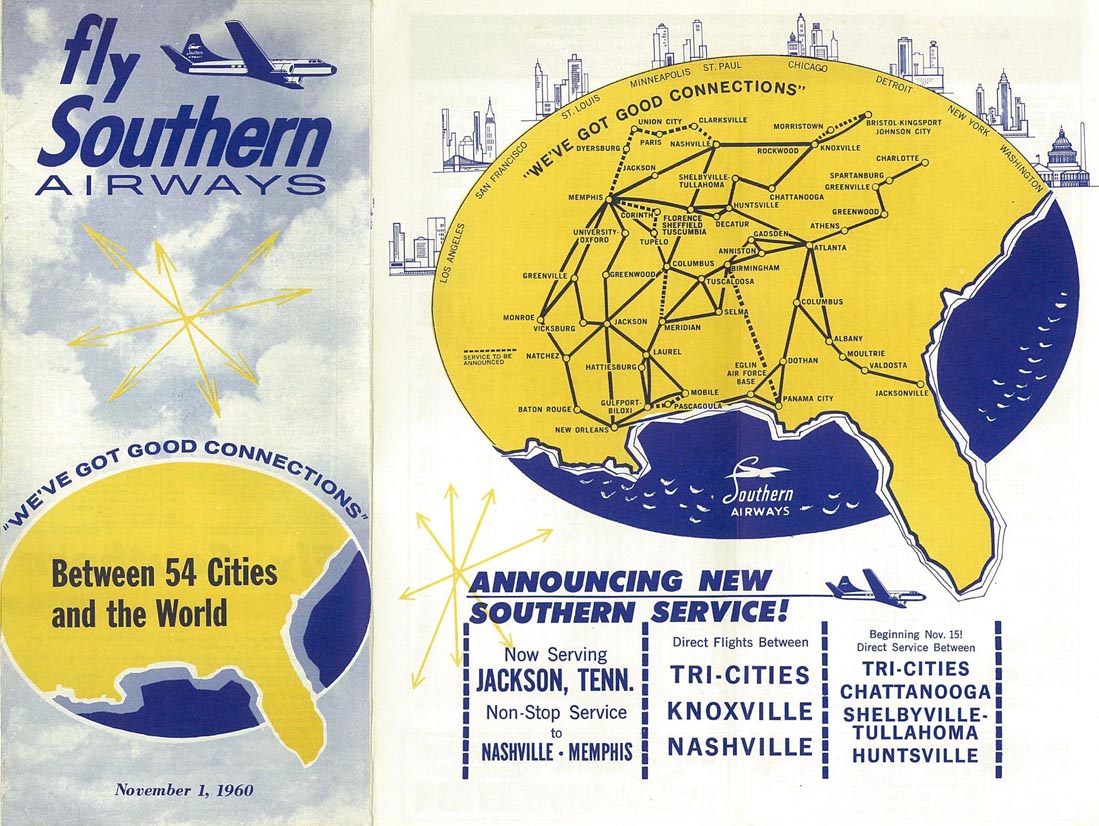 An unidentified group holding models of jet aircraft posing in front of the 1955 addition to the terminal. ​ From the Picnooga collection on Flickr. 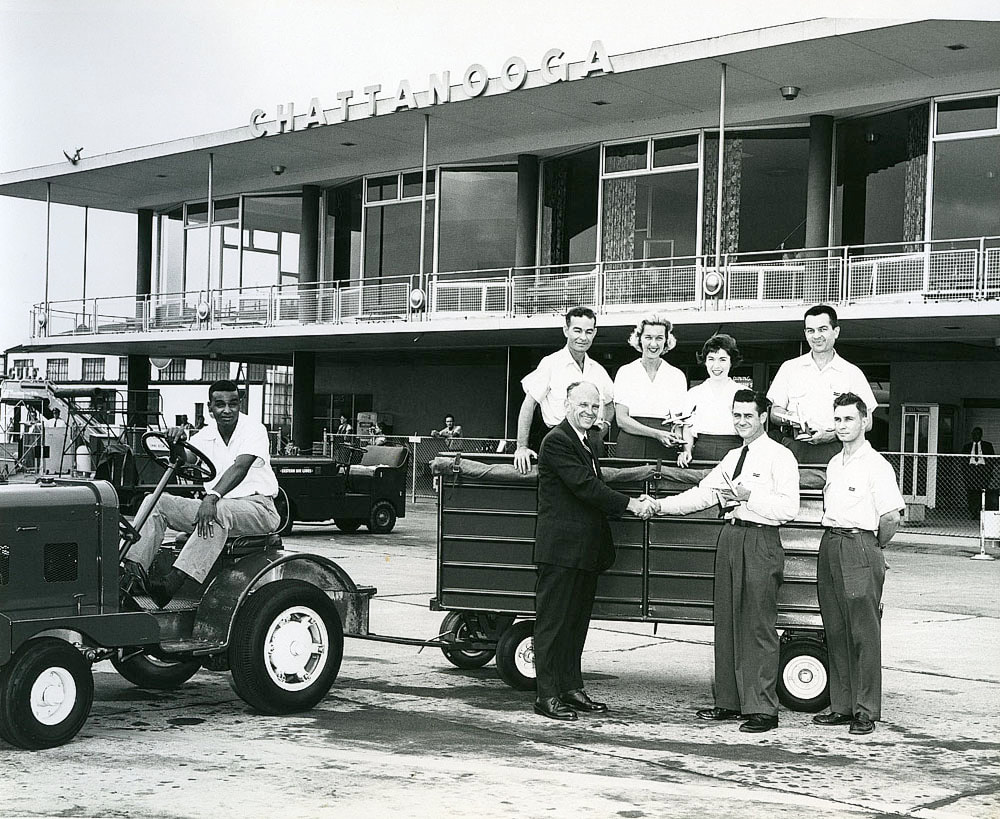 The old terminal is dwarfed by a big Eastern Air Lines Douglas DC-7 in this 1963 photo. An Eastern Convair 440 can be seen in the background at left. It was only a matter of time before the airlines would replace these piston-engine propeller planes with larger jet aircraft and Chattanooga began construction on a new "jet age" terminal that opened the following year. From the Chattanooga Times Free Press Photograph Collection via Chattanooga Public Library. 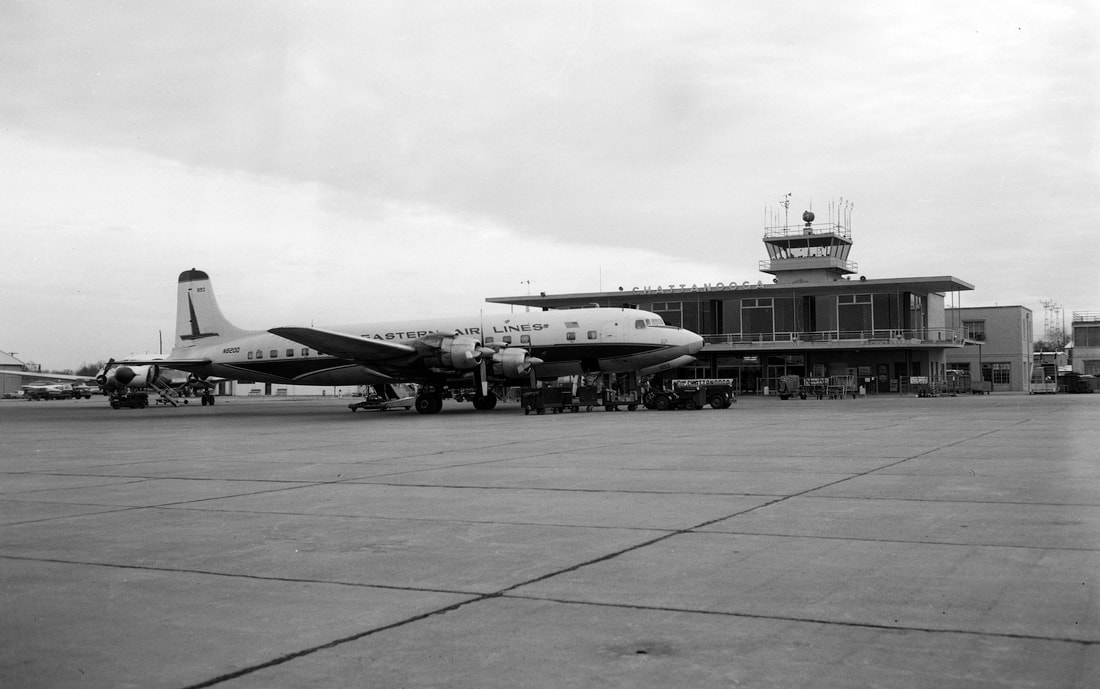 A 1964 photo of Eastern Air Lines Convair 440 N9136 (msn 434) in the updated "Golden Falcon" paint scheme. This plane was sold to Mackey International Airlines in 1970. An Eastern Lockheed Electra can be seen at left. From the Paul Hiener collection via the Chattanooga Public Library. 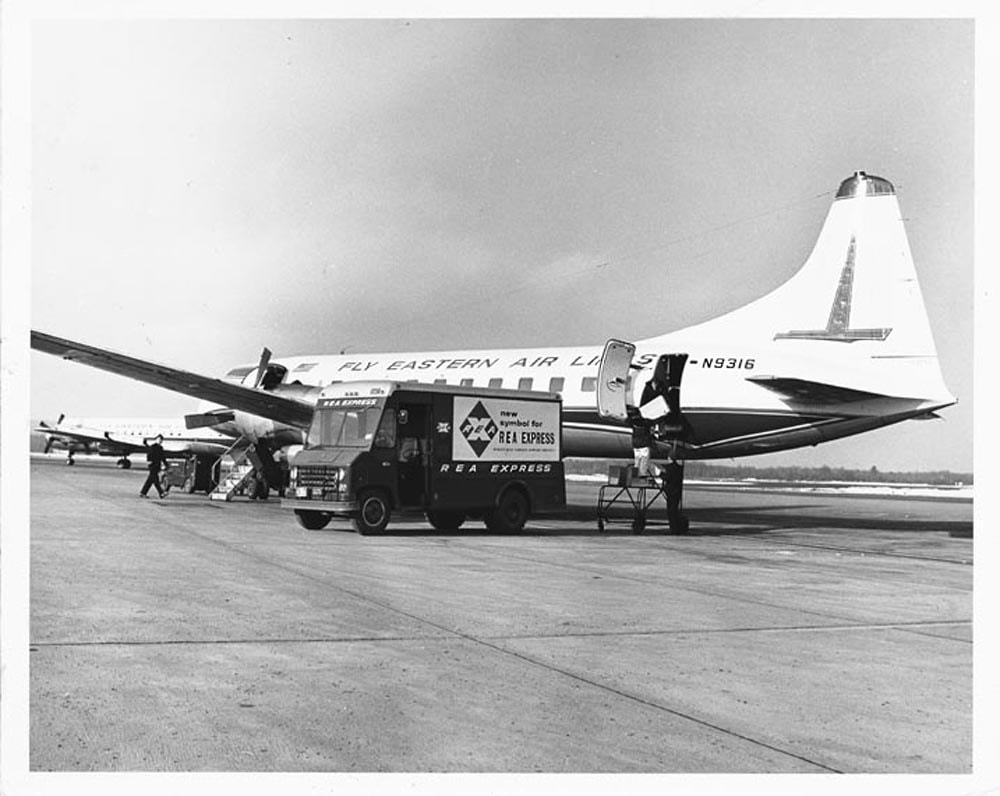