In May 2008, Pacific Wings, of Hawaii, won the Essential Airline Service subsidy to replace ASA at Macon, GA and US Airways Express at Athens, GA. In June the company began flying between Atlanta Hartsfield-Jackson International Airport and both cities as Georgia Skies using 9-passenger, single-engine Cessna Caravans. Fares were $39 on both routes, which initially were also both served by Wings Air.

Georgia Skies slogan was "Go Green. Save Green." and the company backed this up with a promise to plant a tree seedling for every passenger flown as a way to offset carbon emissions.

Below: Georgia Skies Cessna 208B Grand Caravans on the ramp at Atlanta on December 29, 2008. This photo was taken by Flickr photographer James Willamor. 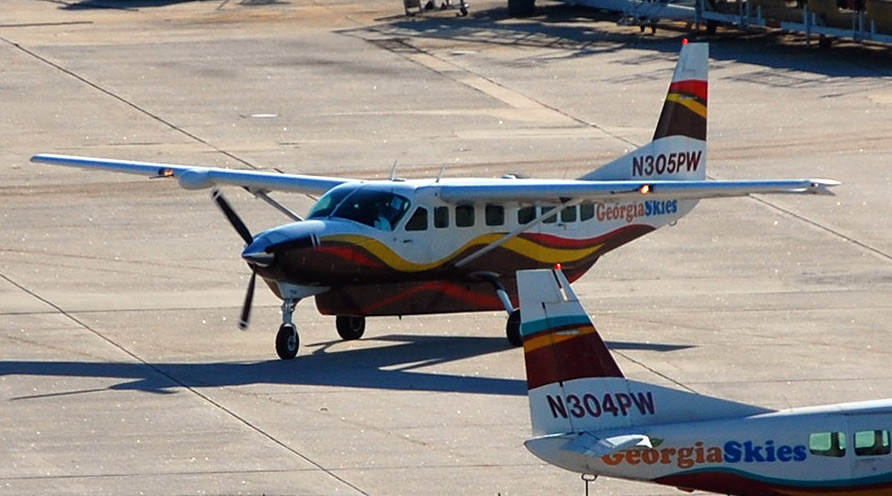 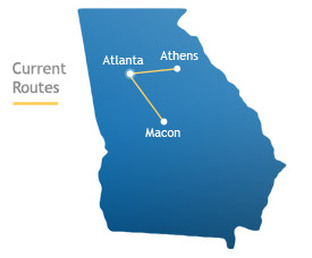 In October 2009, Georgia Skies secured a gate, E-37, at Atlanta Hartsfield-Jackson Airport. Passengers had previously been bused to the terminal from the general aviation ramp, requiring inbound connecting passengers to recheck their bags and go through TSA security screenings a second time. Fares were still only $39.

Parent company Pacific Wings also operated a small hub from Nashville under the brand names Tennessee Skies (between BNA and Jackson, TN) and Kentucky Skies (between BNA and Owensboro, KY). Flights were also offered between Atlanta and Nashville under Georgia Skies, Tennessee Skies and Kentucky Skies names (all on the same flight!). 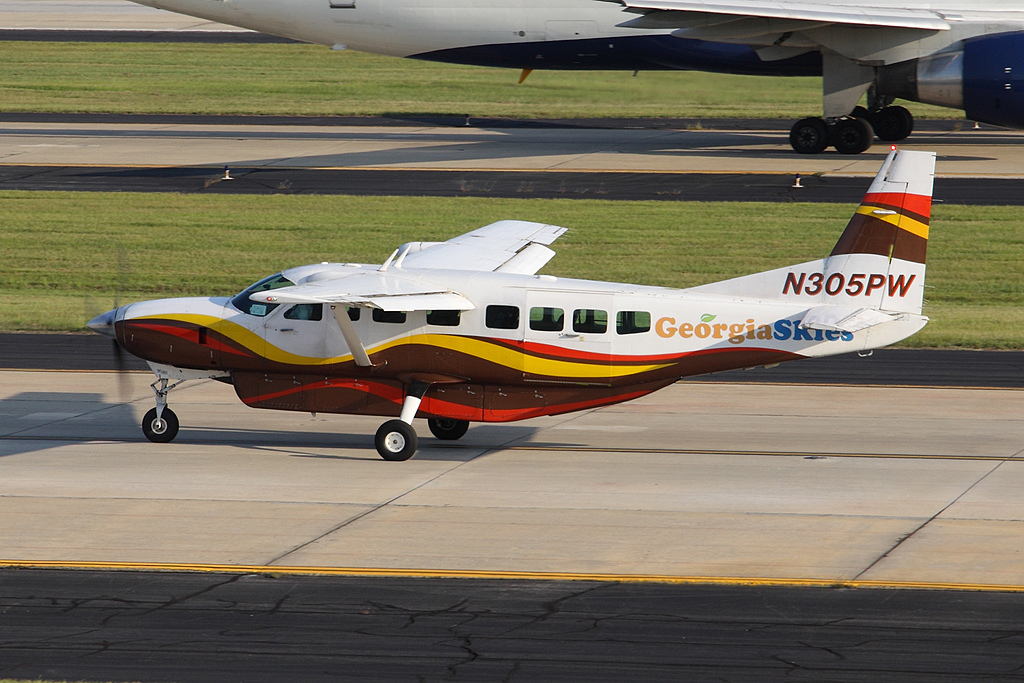 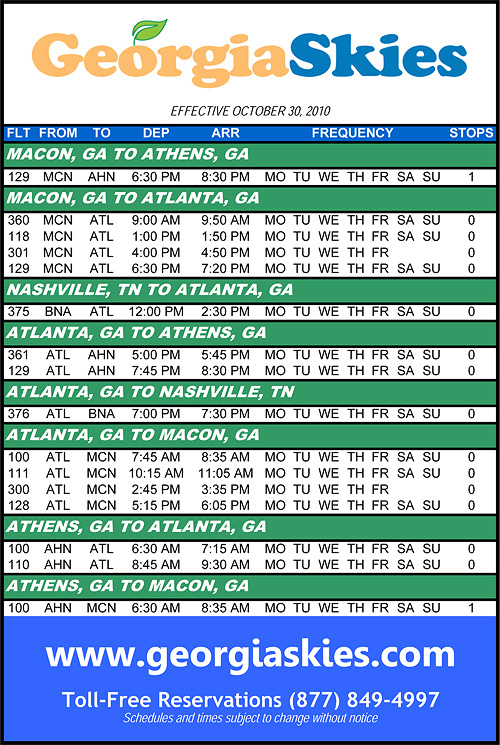 Route maps from 2010 showing segments flown as Georgia Skies (left) and Tennessee Skies / Kentucky Skies.
From the very start, Georgia Skies faced an uphill battle in the Athens and Macon markets. Passengers accustomed to larger aircraft (ASA had flown Regional Jets into Macon) were unhappy with the single-engine Cessnas. The "non-sterile" remote gates and the required rechecking of bags at Atlanta had also been a major obstacle. Georgia Skies also faced harsh criticism in both the Athens and Macon newspapers for their poor customer service, erratic flight schedules and perceived lack of professionalism.

Despite this, Georgia Skies' EAS contract to serve Athens was renewed in 2010 amidst controversy involving city officials and the Athens Banner-Herald's reporting of it. The airline responded by posting 2 massive PDFs in a sarcastic "Breaking News" section on their website. Click these links to read Public Records Reveal Athens Flight Flip Flop and the equally interesting and entertaining County Records Irk Reporter, which is aimed at the Athens Banner-Herald. Unfortunately, as animosity grew against the carrier, passenger counts plummeted to the point that the airline was carrying LESS THAN A DOZEN PASSENGERS PER DAY! Ouch.

So what was the experience like for a passenger traveling aboard Georgia Skies? There's an excellent and eye-opening trip report over at Airliners.net. (There were loads of great photos too but they have since disappeared.) If this is what the average passenger had to go through, it's amazing that the airline lasted as long as it did. The trip report reads like an episode of the old TV show Green Acres.

The writer's conclusion: "Georgia Skies was...interesting. I have no complaints about their aircraft or in-flight service (the young pilot was the most professional person I encountered in my trip), but honestly, Georgia Skies seems to need some serious work when it comes to its management and administration. From week-long groundings of flights to non-existent customer service, Georgia Skies doesn't make it easy to fly with them. For a cheap C208 ride, sure, Georgia Skies was great. As an airline for every-day travel ...I wouldn't recommend it." 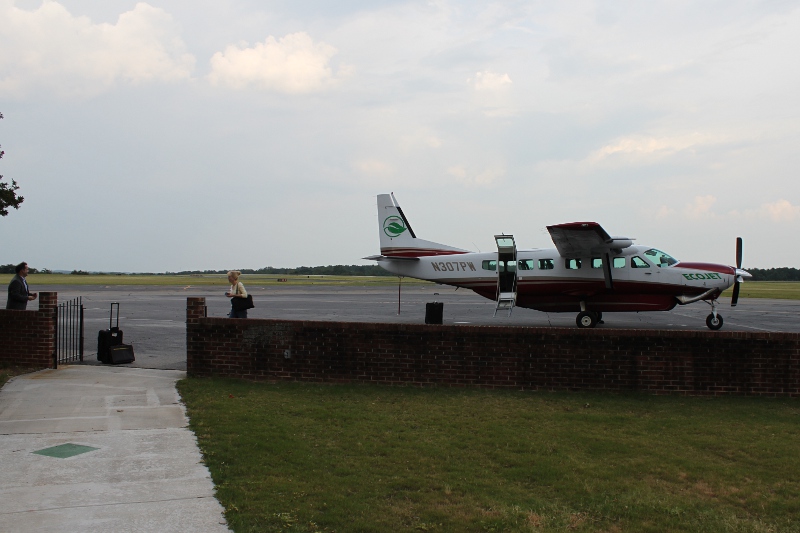 P.S - An odd addendum: It has repeatedly been suggested to me that Pacific Wings officials may have come up with the name Georgia Skies after discovering my history about Georgia commuter airlines, Sunshine Skies. Can anyone confirm or disprove that? "Georgia Skies" was actually the original proposed title of my 2005 book before I decided to also include airlines from Florida.
Here are the two Georgia Skies / Pacific Wings PDFs mentioned earlier in the article: