The previous page covered the history of Marathon Airport from its beginnings as a training field during World War II to a bustling commuter airport in the late 1980s.

At the dawn of the 1990s, Marathon airport was served by five airlines: Bar Harbor / Eastern Express, Comair / Delta Connection, American Eagle, Airways International and a new Air Sunshine (unrelated to the legendary 1970s airline of the same name).

Comair discontinued flights to Marathon at the end of the tourist season in spring 1990 and Bar Harbor shut down with the demise of Eastern Air Lines in January 1991.

This is the Marathon Airport terminal as it looked during my visit on September 3, 1993. 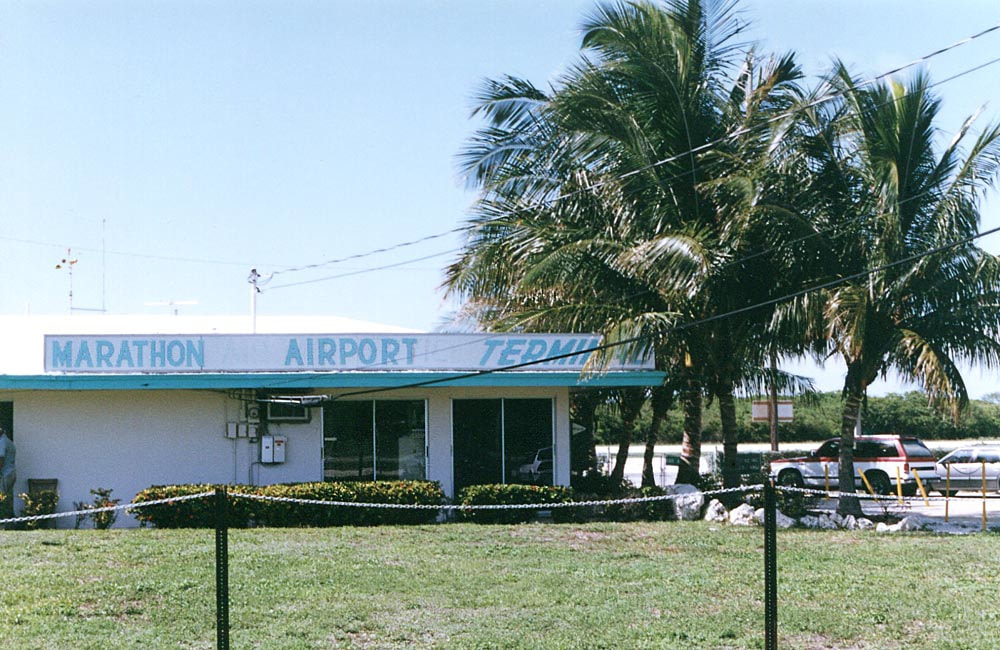 Airways International was the only airline to fly between Miami and all three commercial airports in the Florida Keys during the early 1990s. 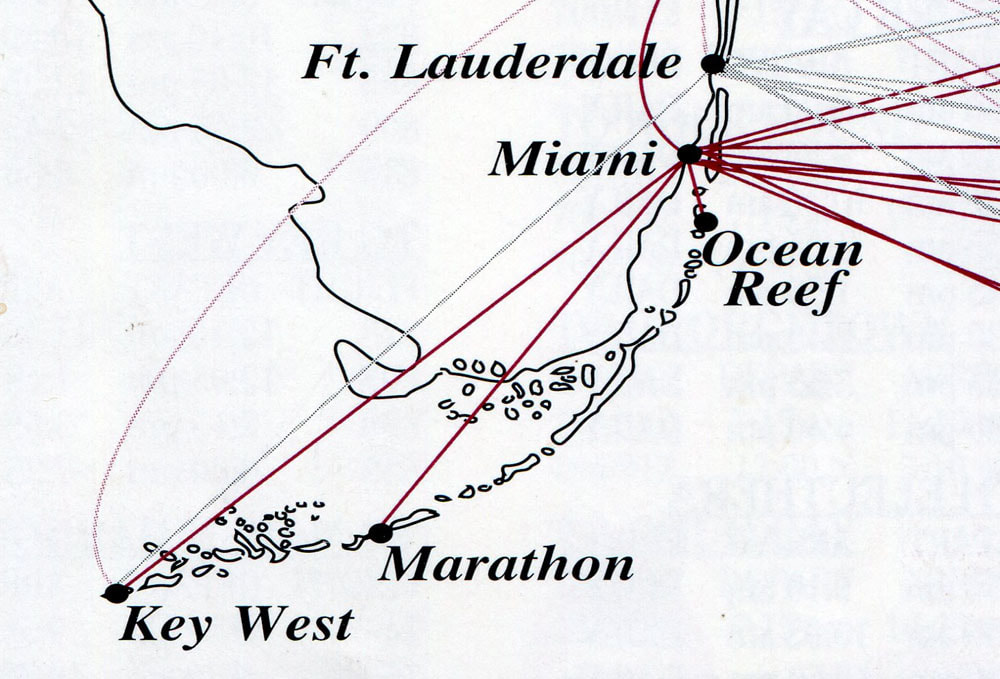 A detail from an undated early nineties Airways International timetable shows five daily round-trips between Marathon and Miami. Cessna 402s were used on all flights. 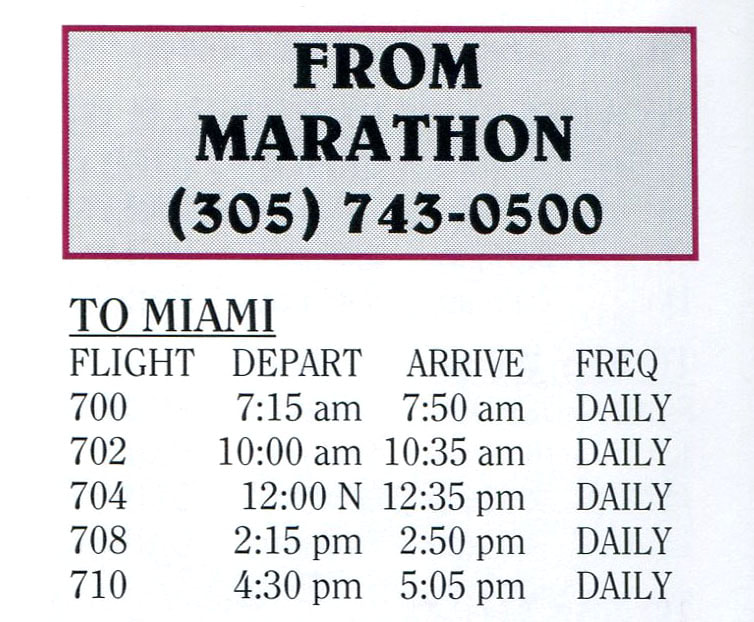 The May 1992 edition of the Official Airline Guide shows 3 airlines at Marathon: Airways International with 5 flights a day to Miami, American Eagle with 3 flights a day to Miami using Jetstream 31s and Air Sunshine with 5 flights most days to Ft. Lauderdale, 4 continuing on to Sarasota using Cessna 402s.
Gulfstream International Airlines served Marathon from 1994 through 1996. This timetable, effective May 1, 1994, shows two non-stops to Miami and a daily direct flight to MIA via Key West.

American Eagle was the dominant carrier at Marathon throughout the 1990s, carrying passengers to and from American's massive Miami hub. As of January 31, 1995, American Eagle was flying 5 daily round-trips between the two cities using 46-passenger ATR-42 turboprops. By the end of the year, the ATRs were replaced with Shorts 360s.
After four years of planning and construction, Marathon opened a new $7.8 million airport terminal on Wednesday February 15, 1995. The 19,000 square foot, two-story facility was designed to reflect the classic Florida Keys "Conch architecture" look and featured high ceilings and an airy, tropical look inside. There was room for five airlines, five car rental offices, a restaurant and shops. At the time it opened, three airlines served Marathon: American Eagle, USAir Express and Gulfstream International. Photo credit: Keys Weekly 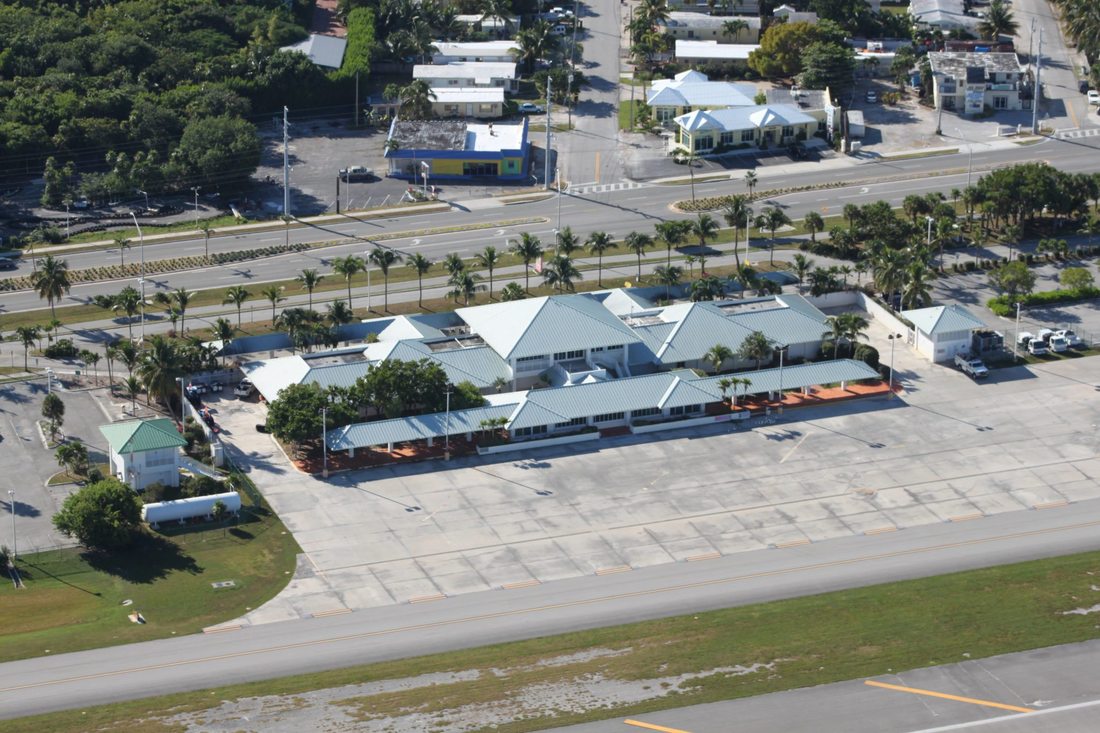 A detail from a USAir system map effective February 15, 1995, the same day the new terminal opened. USAir Express was operating two daily flights between Marathon and Tampa with a third flight on Saturdays. By the end of 1995, the Tampa flights were discontinued and two daily round-trips were added to Orlando using Beechcraft 1900s. The flights were later switched back to Tampa. 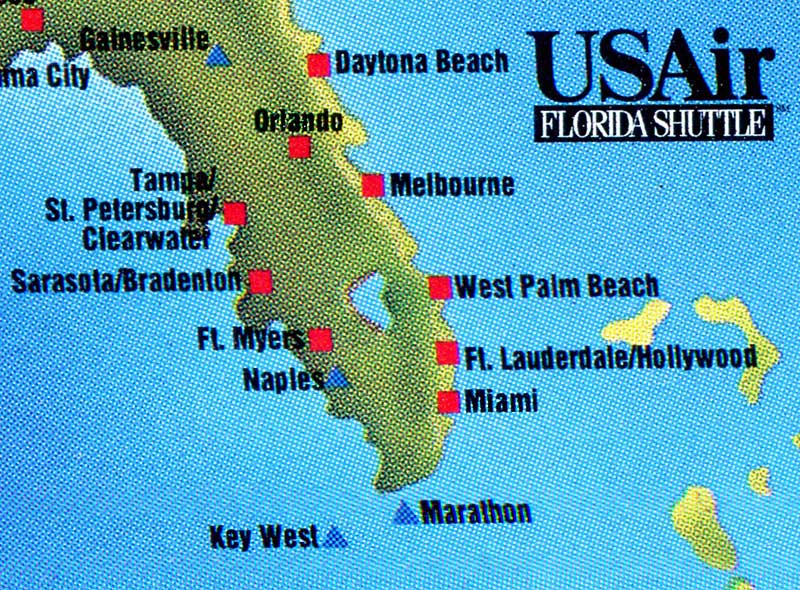 DOT records show that traffic at Marathon peaked in 1996 with 39,614 departing passengers, which means that nearly 80,000 passengers passed through the airport that year.

In 1997 USAir changed its name to US Airways. The newly re-branded US Airways Express left Marathon in early 1998, leaving American Eagle as the city's sole air carrier.
Marathon was dealt an unexpected blow when American Eagle, the final major airline code-share affiliate at the airport, ended service to the city in Spring 2000. For the first time in 4 decades, Marathon found itself without scheduled air service. The 1990s began with 5 airlines at MTH, saw record passenger boardings and the construction of a new passenger terminal, but rising costs, the highly seasonal nature of traffic and a general industry move away from turboprops to new regional jets had made service to Marathon less lucrative. Although a couple of independent commuter airlines would soon enter the market, their schedules were too infrequent and their planes too small to make up for the loss. It would be nearly 7 years before another major airline would return to the middle Keys.

This airport summary published by the Florida DOT paints a bleak picture for 2001: no flights, no airlines, no passengers. 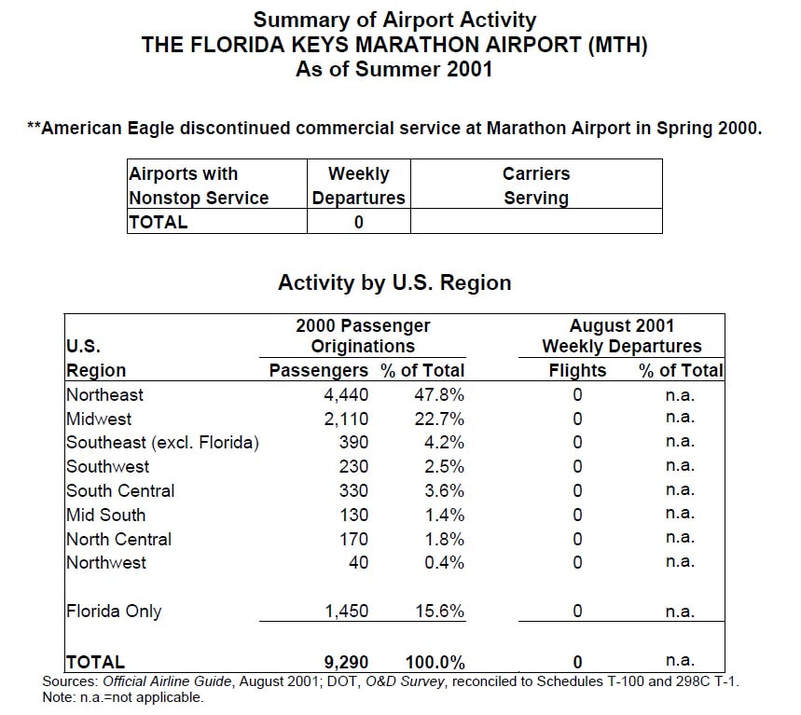 New Smyrna Beach, FL based Vintage Props and Jets began flying to Marathon in 2000 using Beechcraft King Airs and Piper Navajos. Flights were flown "on demand", so the passenger totals were not included in the DOT summary shown above. This September 2001 schedule shows an early morning Marathon - Key West - Ft. Lauderdale - Melbourne - Daytona Beach flight and a late morning non-stop to Ft. Lauderdale. All Marathon flights were cancelled in 2002 due to lack of demand. 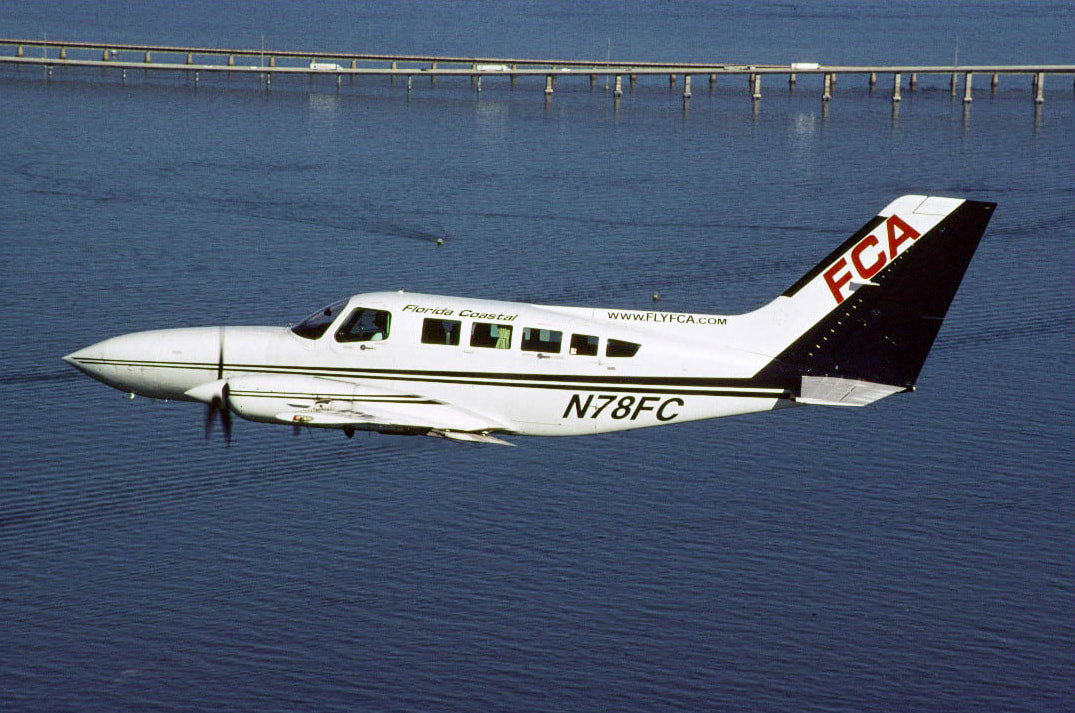 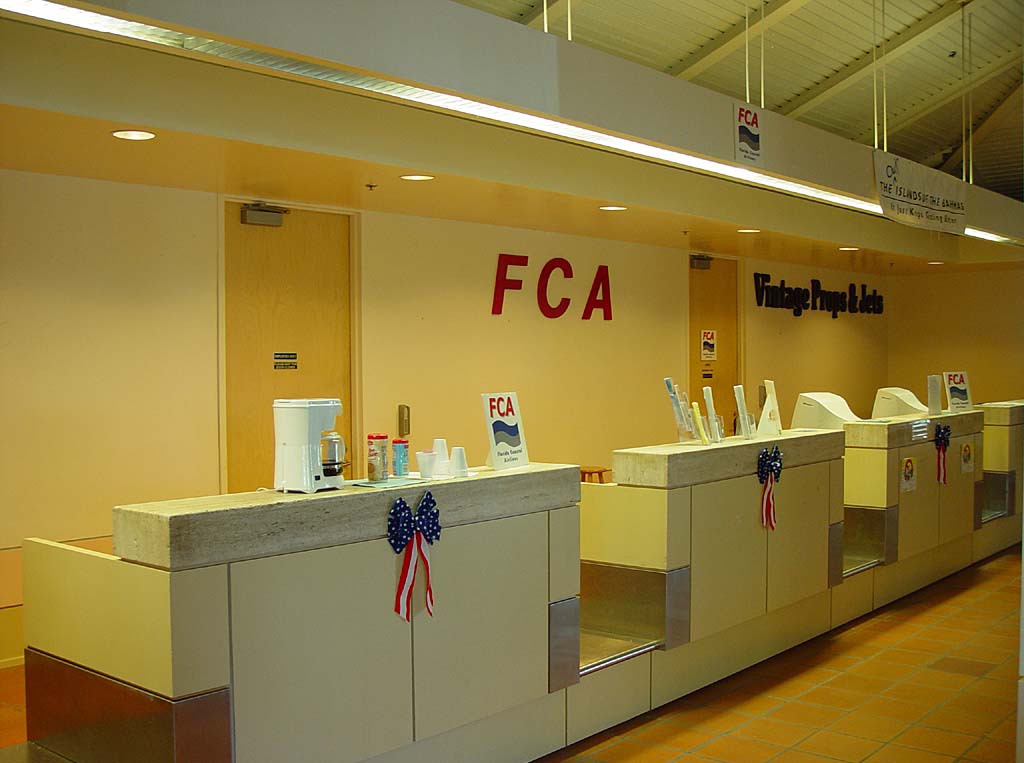 An excerpt from Florida Coastal Airlines timetable effective December 20, 2004 showing three non-stops to Miami and an additional flight to Key West starting on February 12, 2005. Their map from summer 2005 shows the routes still in place, but Marathon would be dropped by the airline before the end of the year.
Delta Air Lines made an historic announcement on July 6, 2006: on February 15, 2007, Delta Connection carrier Atlantic Southeast Airlines would begin non-stop flights to Atlanta using 40-seat Bombardier regional jets. This would be the first pure-jet service to Marathon and the first time an airline had offered non-stop flights to a destination outside of Florida. As Atlanta is the largest air hub on the planet, the flights would allow easy connections to virtually anywhere in the world. 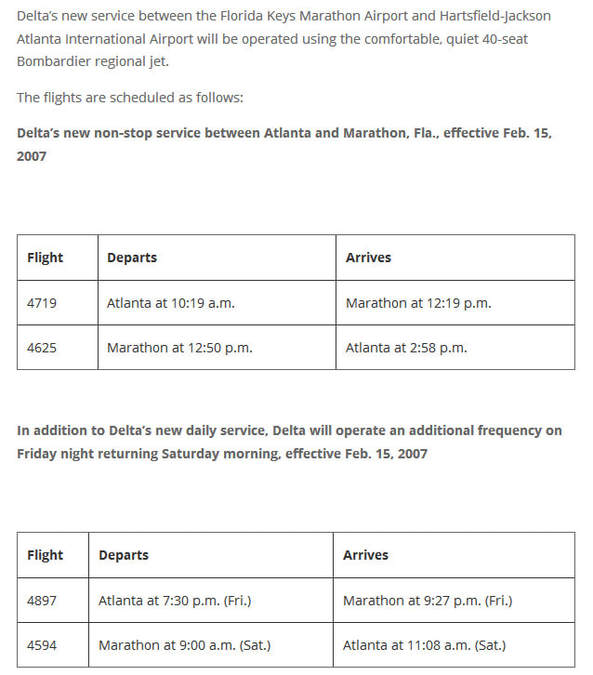 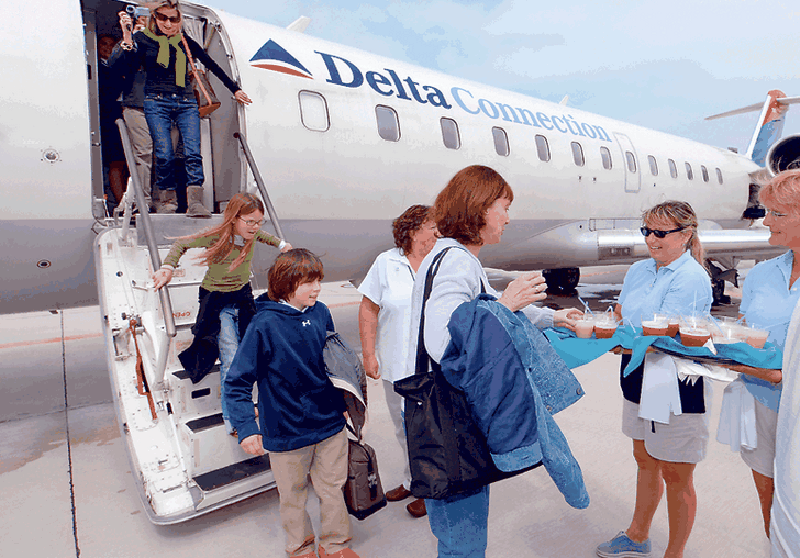 The mood inside the terminal was festive. Passengers were greeted by the press, city and county officials, and this cheerful woman dressed as a giant conch. Photo by Andy Newman/Florida Keys News Bureau. 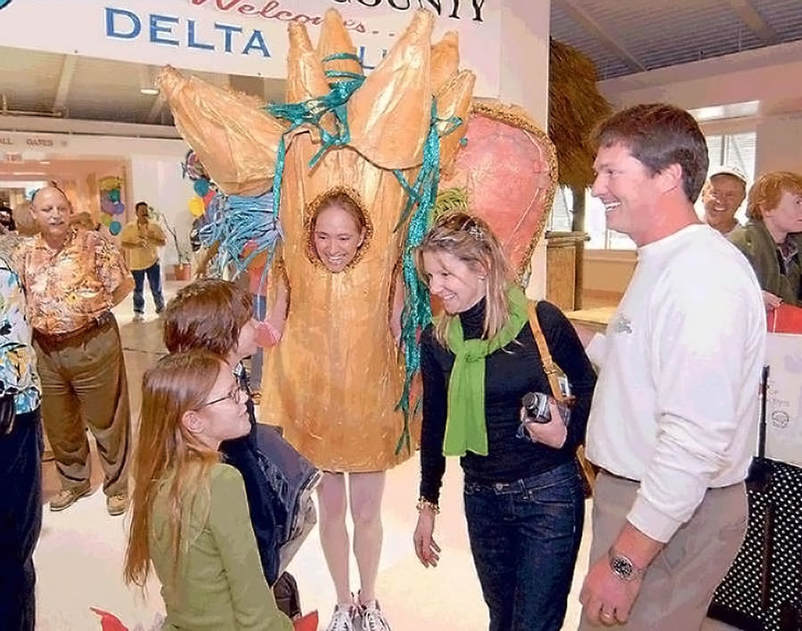 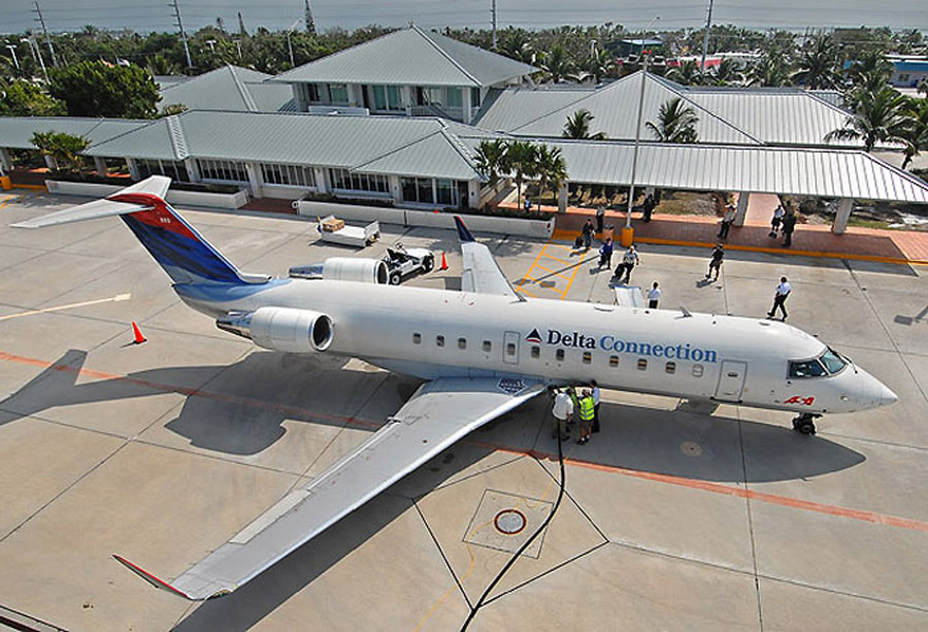 There's an old saying, "If it seems too good to be true, it probably is". Such was the case with jet service to Marathon. Delta claimed that Marathon's 5,000 foot runway imposed serious limitations on the operations of the regional jets and that they could only sell 22 of the available 40-seats to stay within safety margins. Key West has an even shorter runway, but apparently 737s have better short-field performance than the smaller RJs. As winter turned to spring and the weather warmed (increasing the necessary take-off and landing length), Delta switched from using ASA's 40-seat Bombardier jets to Freedom Airlines' 50-seat Embraer Regional Jets which have better performance. This change coincided with start of the slow summer season and Delta quickly decided that flying half empty jets on 700 mile legs was unsustainable. Despite overwhelming community support for the flights and the promise of grant money to offset losses, Delta left Marathon in September after less than 7 months of service.
It was another 14 months until airline service returned to the middle Keys. Continental Airlines contracted Cape Air to operate Continental Connection flights between Marathon and Southwest Florida International Airport in Ft. Myers during the 2008-2009 winter season. A ribbon cutting ceremony took place on December 19, 2008 and Cape Air's wildly painted "Fantasy Flyer" began its daily trek between MTH and RSW. 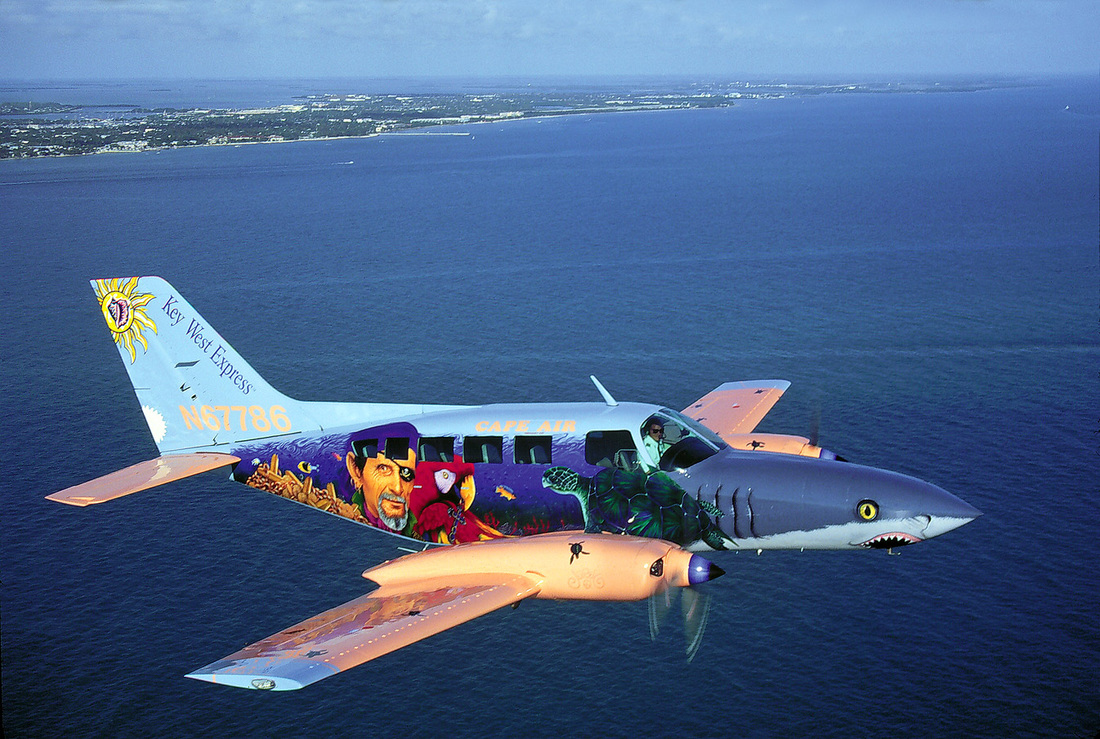 In this December 26, 2008 view of the passenger terminal interior and the Continental Connection ticket counter, the airport looks like a ghost town. "Not much action here", the photographer noted. The Keynoter reported that February 2009 was Cape Air's best month at Marathon with "3.41 passengers per flight". Cape Air needed to fill 6 of the 9 seats on each flight just to break even. Not surprisingly, when the contract ended on April 29, 2009, it was not renewed. That day also marked the end of scheduled airline at Marathon. Photo credit: Julian Mittnacht via JetPhotos.net. 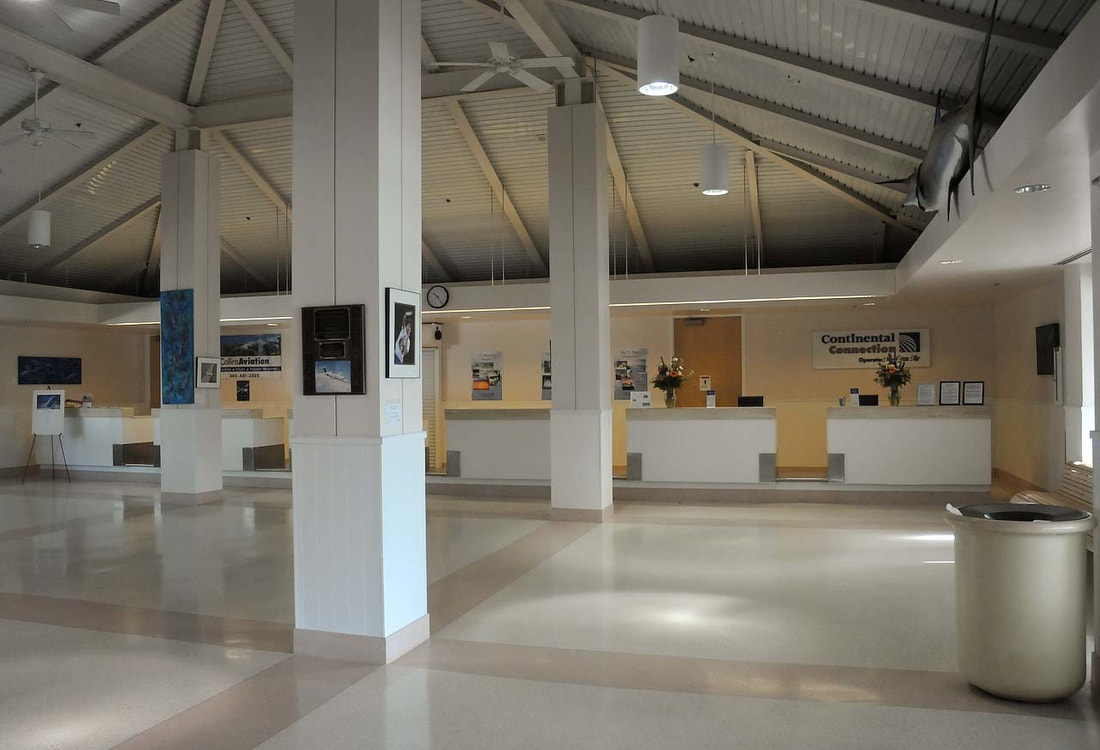 Despite nearly a decade without airline service, Marathon has not given up hope. As seen in this photo from the portfolio of Wilder Architecture, the terminal has recently undergone a multi-million dollar renovation and sits ready for the return of planes full of passengers seeking sun and fun in the Florida Keys... 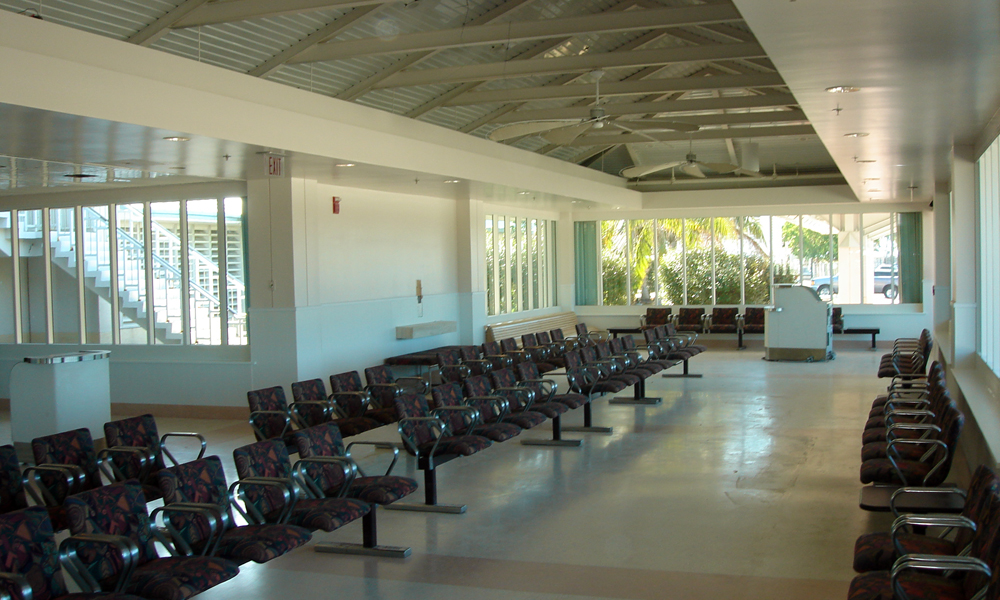