Jacksonville International Airport was built as a replacement for the outdated Thomas Cole Imeson Airport. By the early 1960s, it became obvious that Imeson, built in the early days of piston engine propeller aircraft, was too small to handle the increasing size and numbers of jet aircraft entering service with the airlines. Expansion was impractical because of the surrounding water, terrain, and dense development, so a site for a new airport was chosen about five miles to the north. Construction began in 1965.

The new Jacksonville airport is nearing completion in this May 1, 1968 aerial photo, facing east. The layout consisted of two runways and a central passenger terminal with three concourses. There was plenty of room for expansion. I-95 runs horizontally across the top of the photo and the interchange for the yet to be built I-295 can be seen at top right. Photo from the Jacksonville International Airport flickr archives. 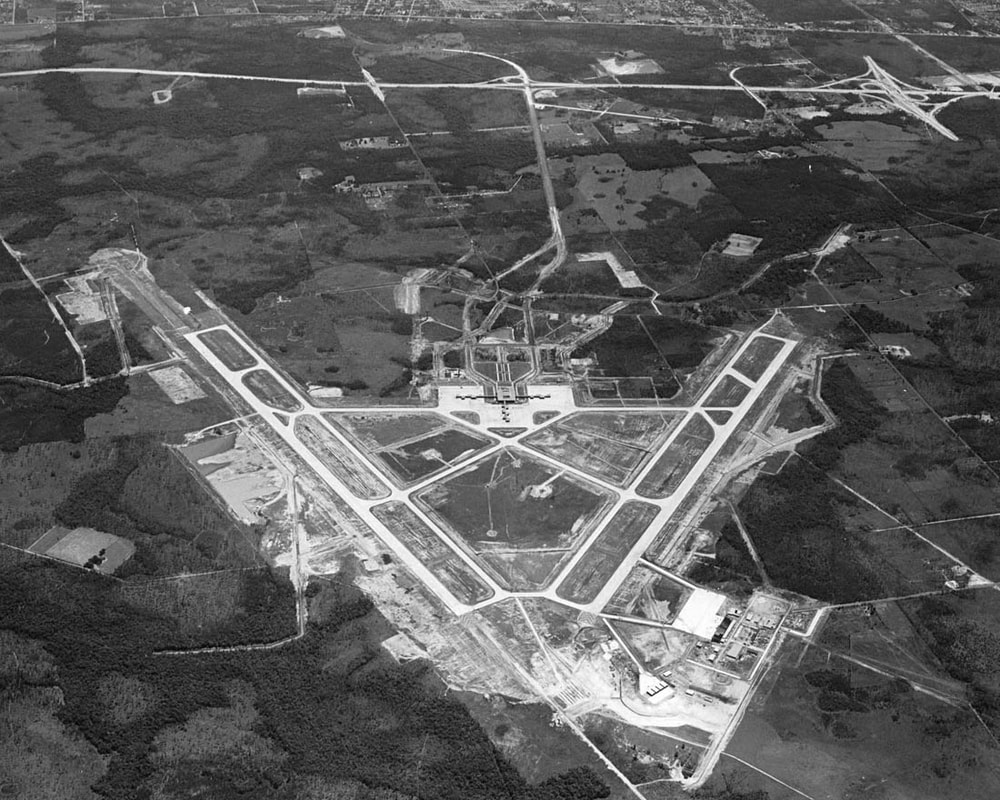 A dedication ceremony and open house was held on September 1, 1968 and the public turned out in droves to tour the new facility. In the photo below, the aircraft ramps and taxiways are packed with the cars of sightseers. Imeson Airport can be seen as a gray clearing near the St. John's river at top left and downtown Jacksonville can be seen at top right. Photo from the JAX flickr archives. 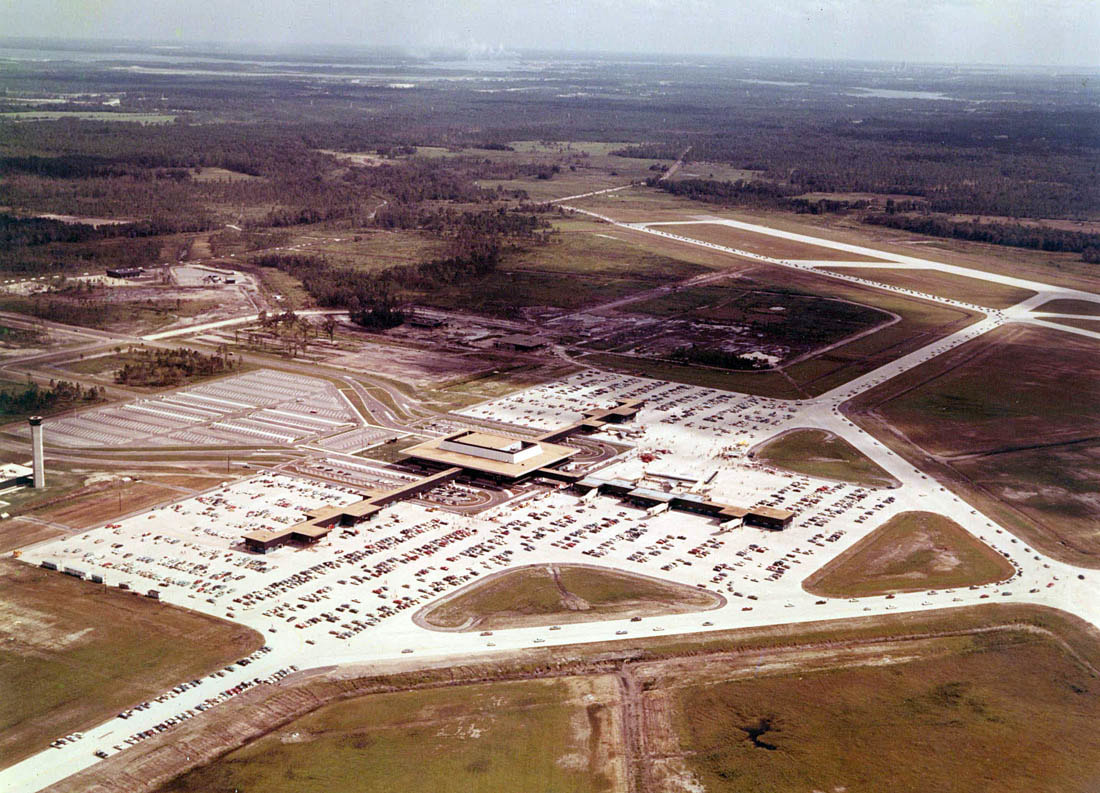 A detail from the above photo. If you look closely just to the right of the main terminal, you'll see a National Airlines 727 and Eastern Air Lines DC-8 also open for tours. At far right is a line of small aircraft including several single-engine Cessnas and a Shawnee Airlines Beechcraft B-99. Photo from the JAX flickr archives. 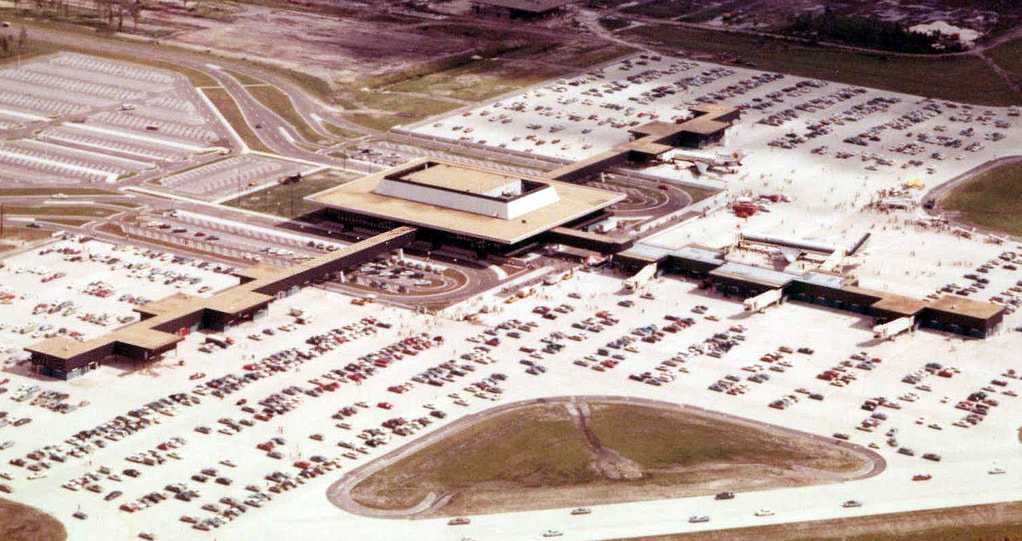 Ground level view of the Eastern Air Lines DC-8 and National Airlines 727 open for tours during the open house. The DC-8 was parked parallel to the concourse with two jetways in use. I don't believe the two-jetway setup was ever used for scheduled flights. Photo from the Jacksonville Florida Times-Union. 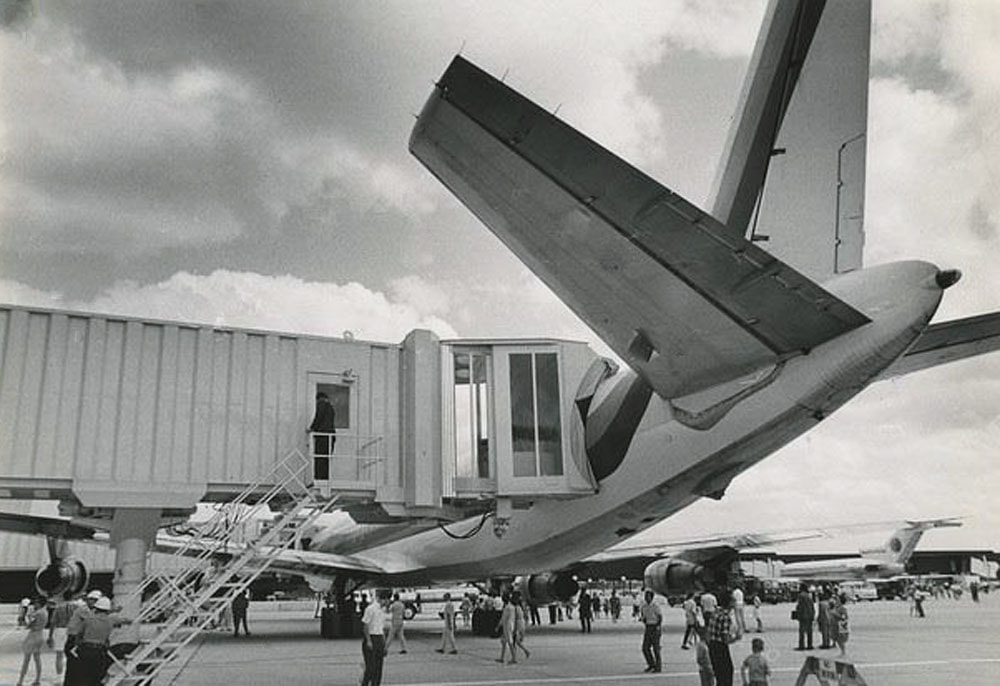 Another ground level view beneath the tail of the Eastern DC-8 showing a Shawnee Airlines Beech 99 in the distance at far right. Courtesy of JAX. 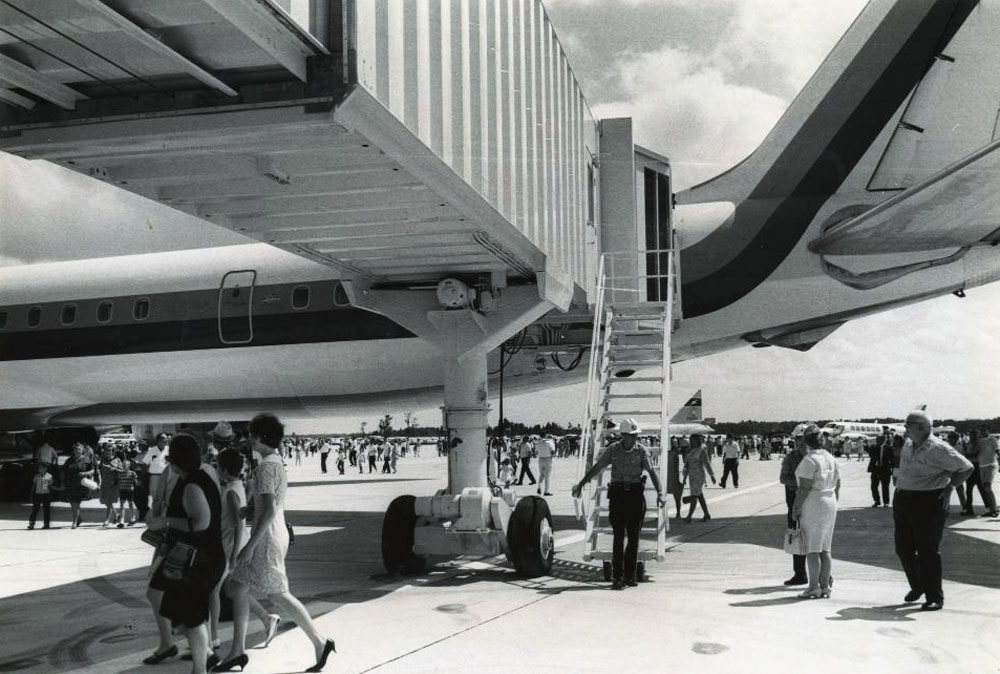 Here's part of the lineup of small aircraft seen in the previous photos. The main terminal is visible in the background and visitors are touring a Shawnee Airlines Beechcraft B-99 at right. ​Courtesy of JAX. 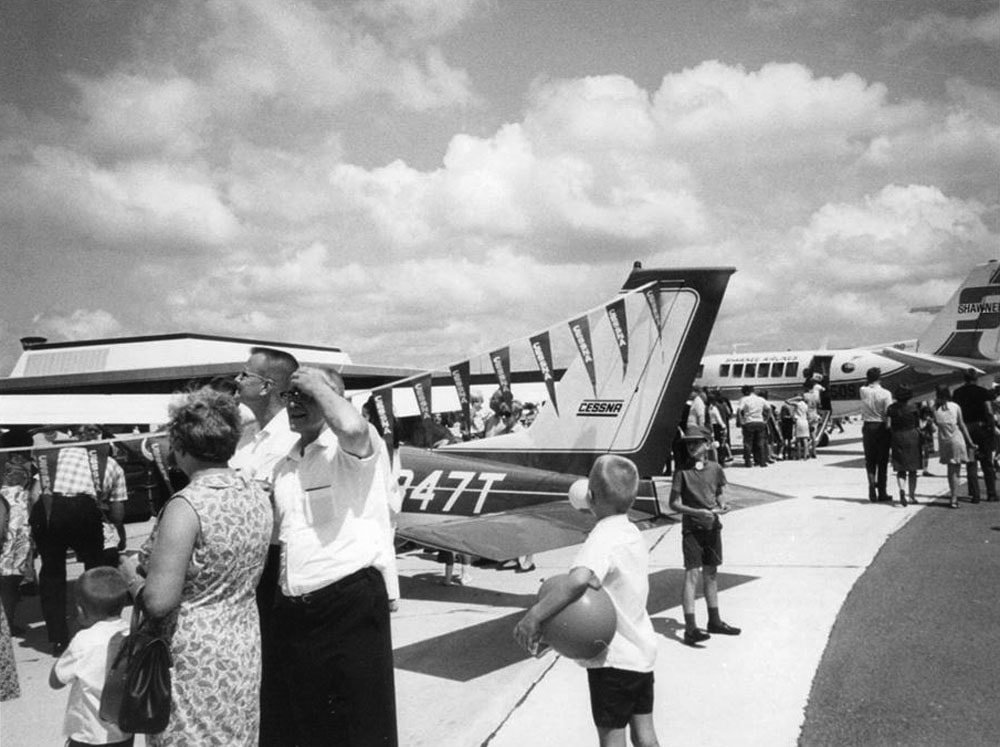 A head on shot of the DC-8. ​Photo from the JAX archives. 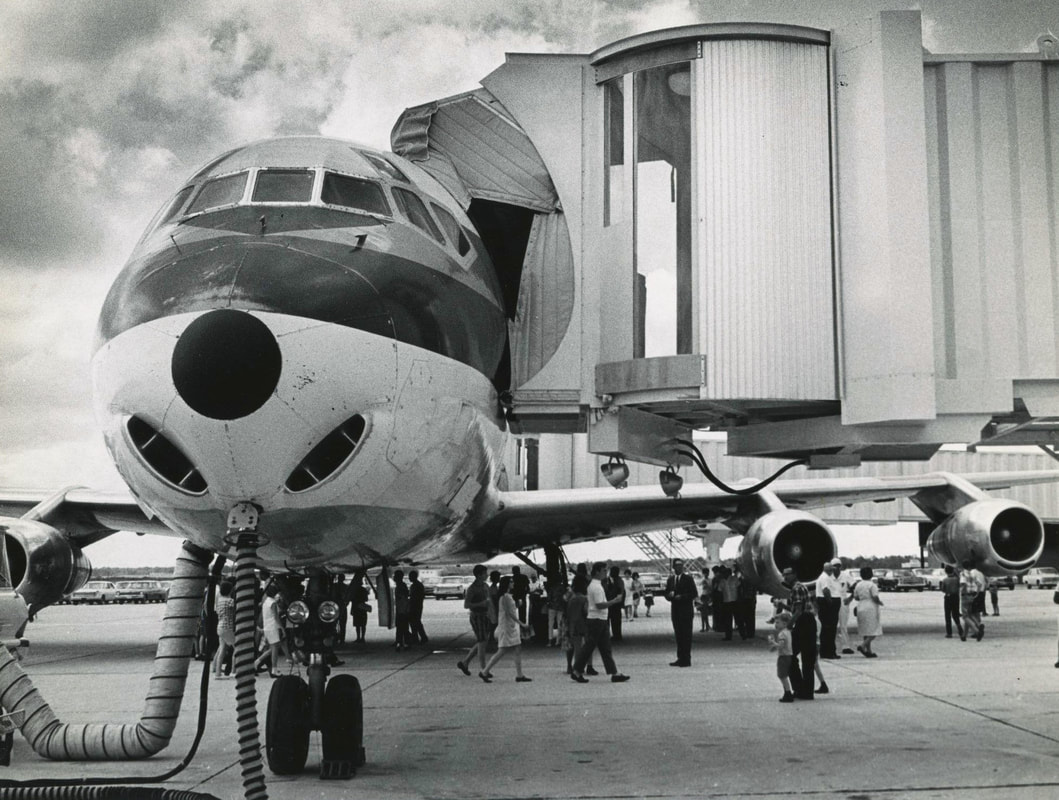 Visitors exploring the spacious new terminal lobby during open house in September 1968. The terminal would officially open the following month. Photo from the JAX archives. 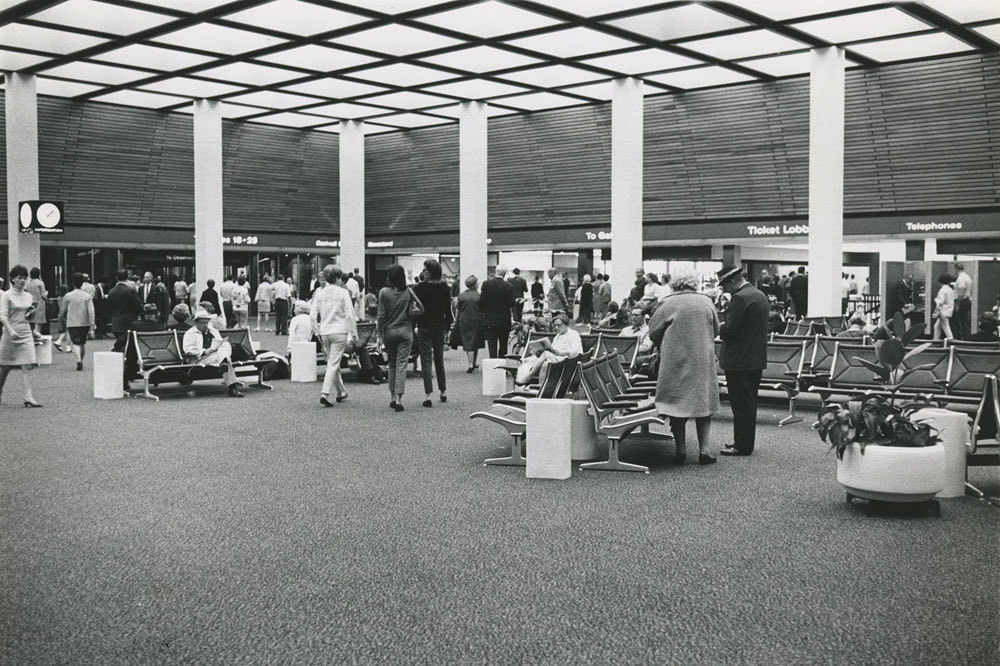 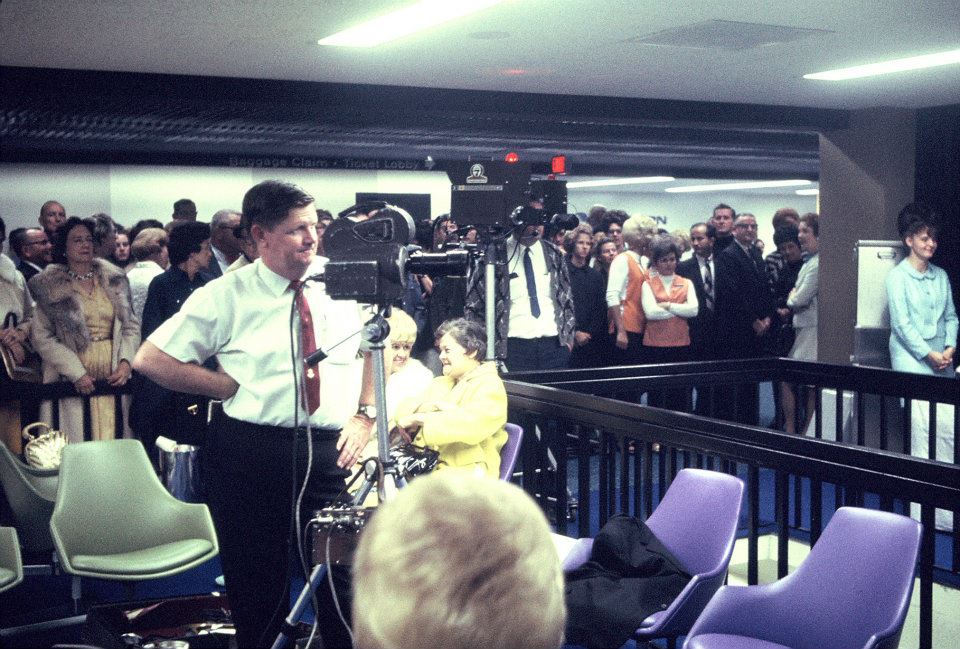 Passengers on the inaugural arrival were greeted by city and airport officials and served slices of cake. ​Courtesy of JAX. 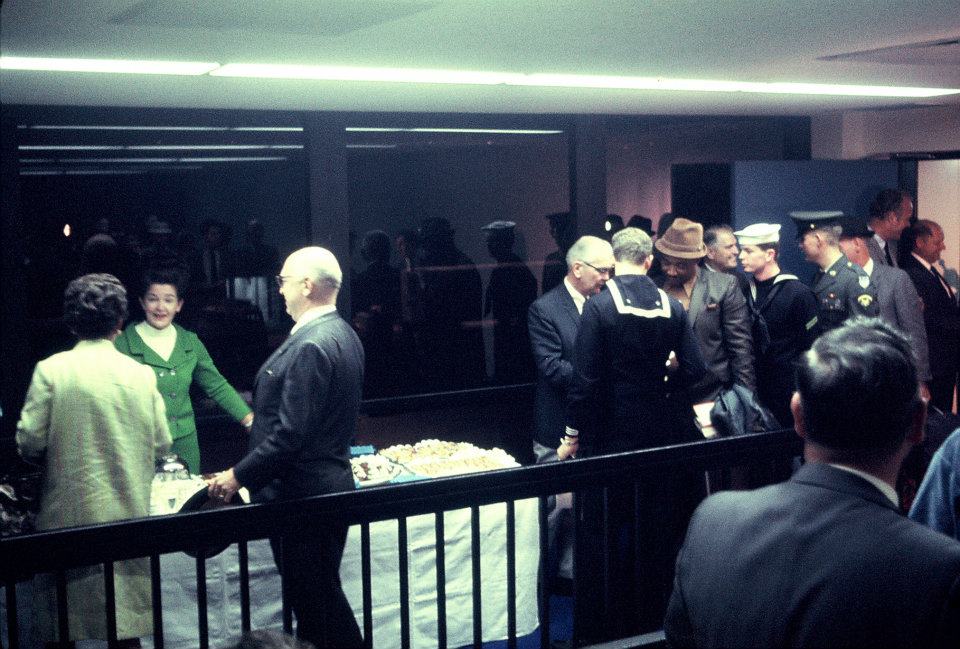 The passenger terminal featured separate ground floor arrival and departure lobbies, each with its own dedicated road and parking lot. Departing passengers entered on the north side, seen in the foreground of the next photo, and arriving passengers used the baggage claim and car rentals on the south side.

Here's a press photo of the newly opened terminal, circa 1968. From the photo's original description: "The terminal at the new Jacksonville International Airport has been named the outstanding facility designed for public service in Northeast Florida in the last three years. Reynolds, Smith and Hills, Jacksonville architectural-engineering-planning firm which designed the terminal, won the top award in a competition sponsored by the Jacksonville Chapter of the American Institute of Architects." Photo from the Jacksonville International Airport flickr archives. 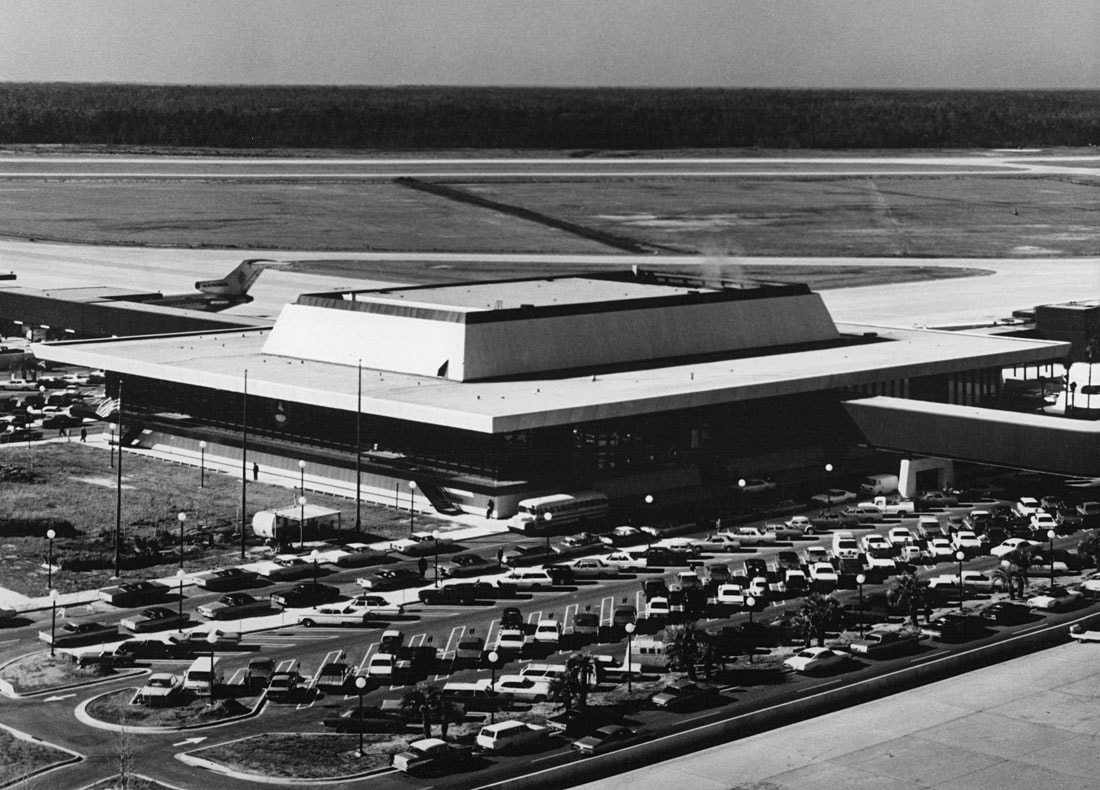 From the ground floor ticket lobby, passengers would take this escalator to the second floor waiting lobby which connected to all three concourses. ​Courtesy of JAX. 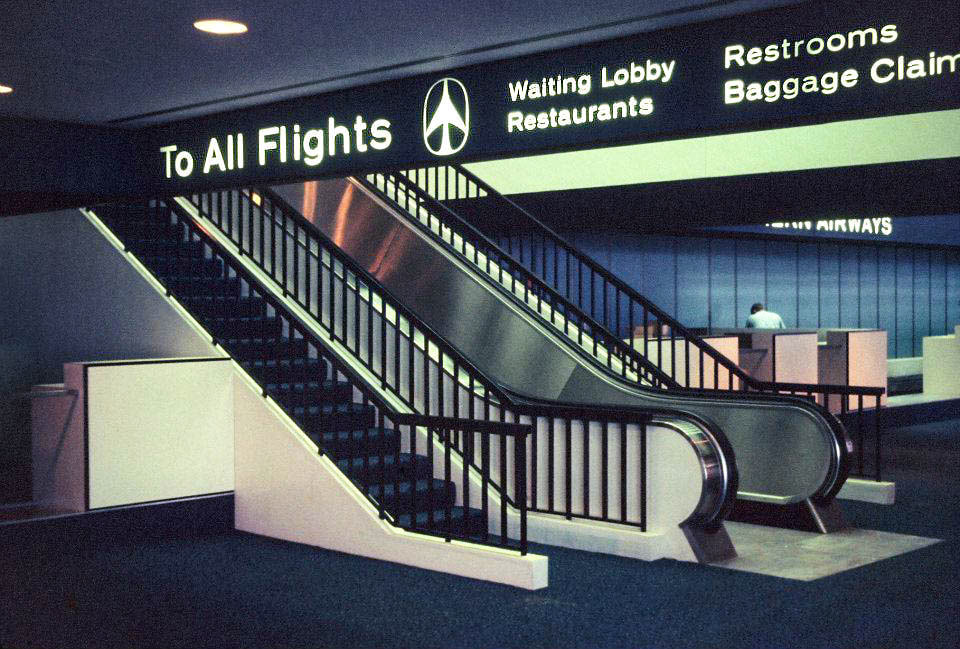 The central lobby on the second floor featured a snack bar, restaurant, cocktail lounge, gift shops and access to the three concourses. ​Courtesy of JAX. 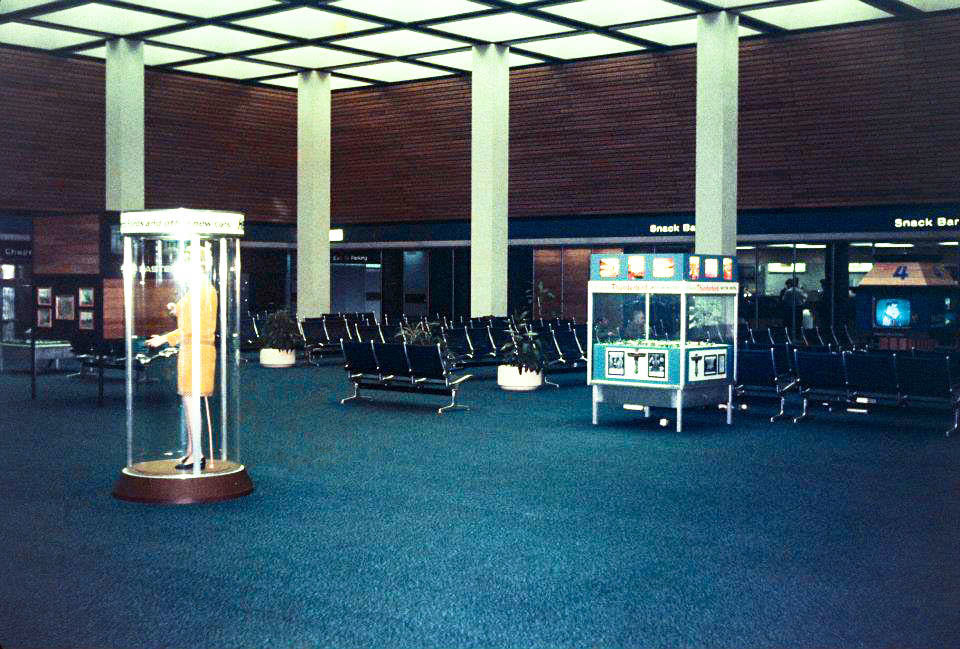 A view of the north concourse with gift shop visible at left. ​Courtesy of JAX. 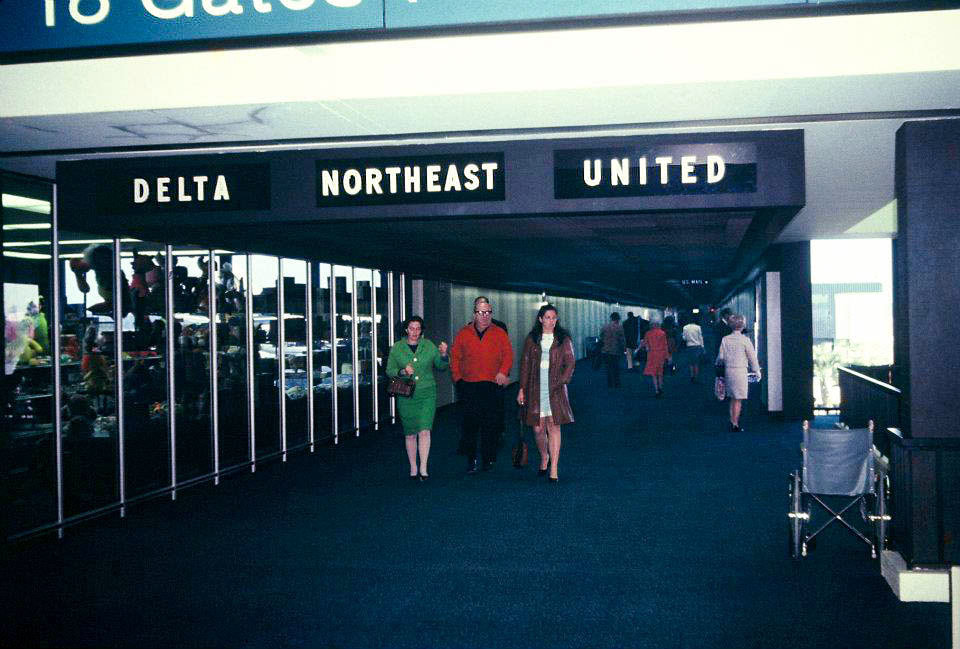 A great postcard view taken from the airport observation deck, circa 1969, showing a National 727 at the gate with an Executive Airlines Beechcraft B-99 in the foreground. 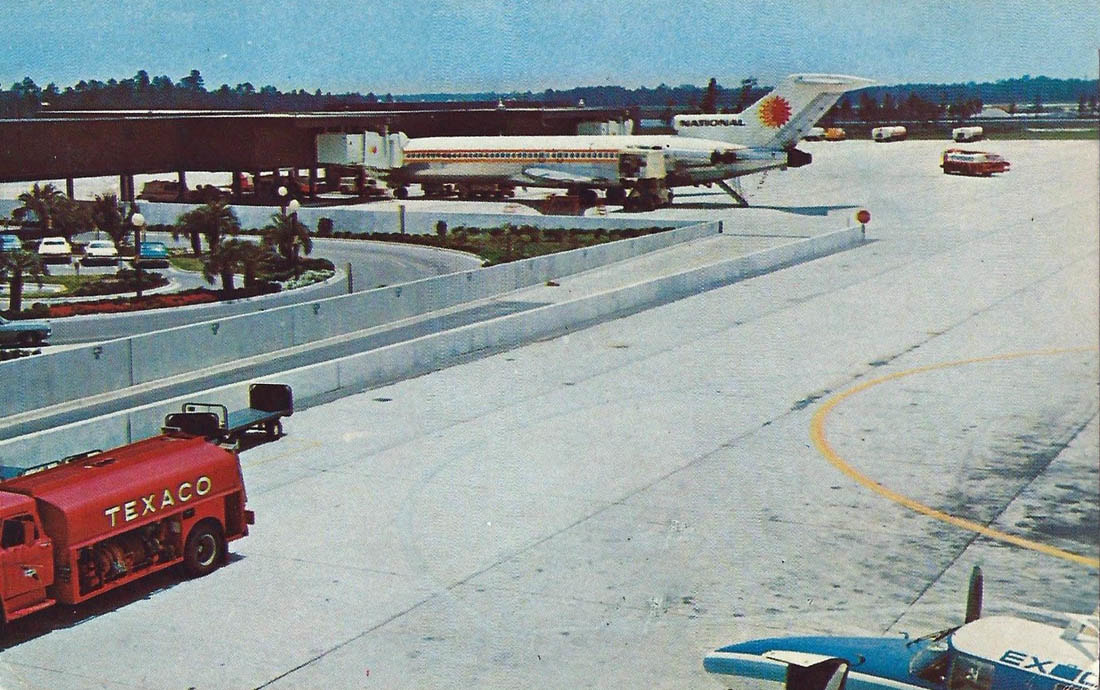 NEXT: JACKSONVILLE AIRPORT IN THE EARLY 1970s
If you would like to contribute photos, scans, stories or additional information about any of the airlines, airports or aircraft on this site, please contact me, David Henderson, using the mail icon above. Help preserve the colorful history of aviation in Florida and Georgia!