Also see the Shawnee Airlines Timetable Gallery and The Crash of Shawnee Flight 103﻿﻿.
Shawnee Airlines had a long and turbulent history that covered three distinct periods. It initially operated a large intrastate commuter network in Florida beginning in 1968. Intrastate flights were so popular that major airlines eventually moved into key Shawnee markets, prompting a shutdown on December 28, 1972 [1]. The airline returned on March 29, 1973 [2] with a scaled-down route system and an emphasis on flights between Florida and the Bahamas. Florida Airlines took over Shawnee in 1975 and briefly operated it as a subsidiary before a second shutdown in November 1977. Shawnee was resurrected by Air Miami in 1978 and continued to fly on a much smaller scale to the Bahamas and Keys until 1980. Read Randy Jackson's amazing firsthand account of a Shawnee Airlines DC-3 crash HERE !

Shawnee began operations in 1968 with a fleet of Beechcraft B-99s. Here's an early publicity photograph showing N850SA. Thanks to Karen Nystrom for mailing this large photograph to me! 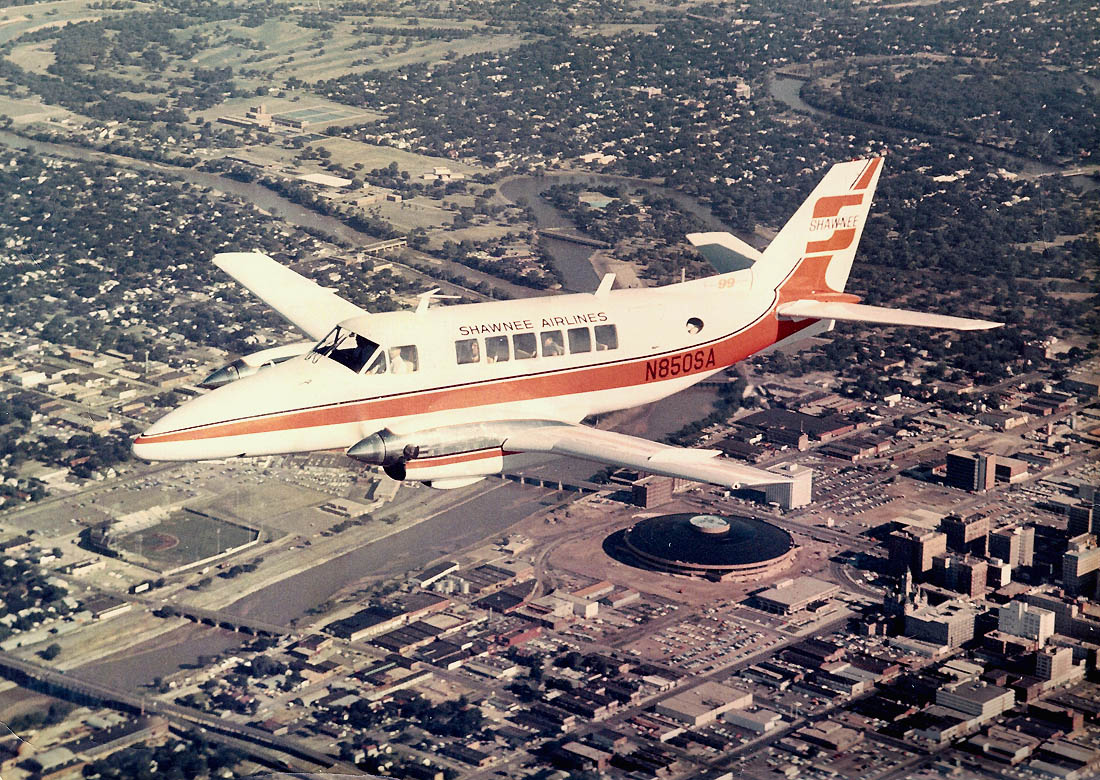 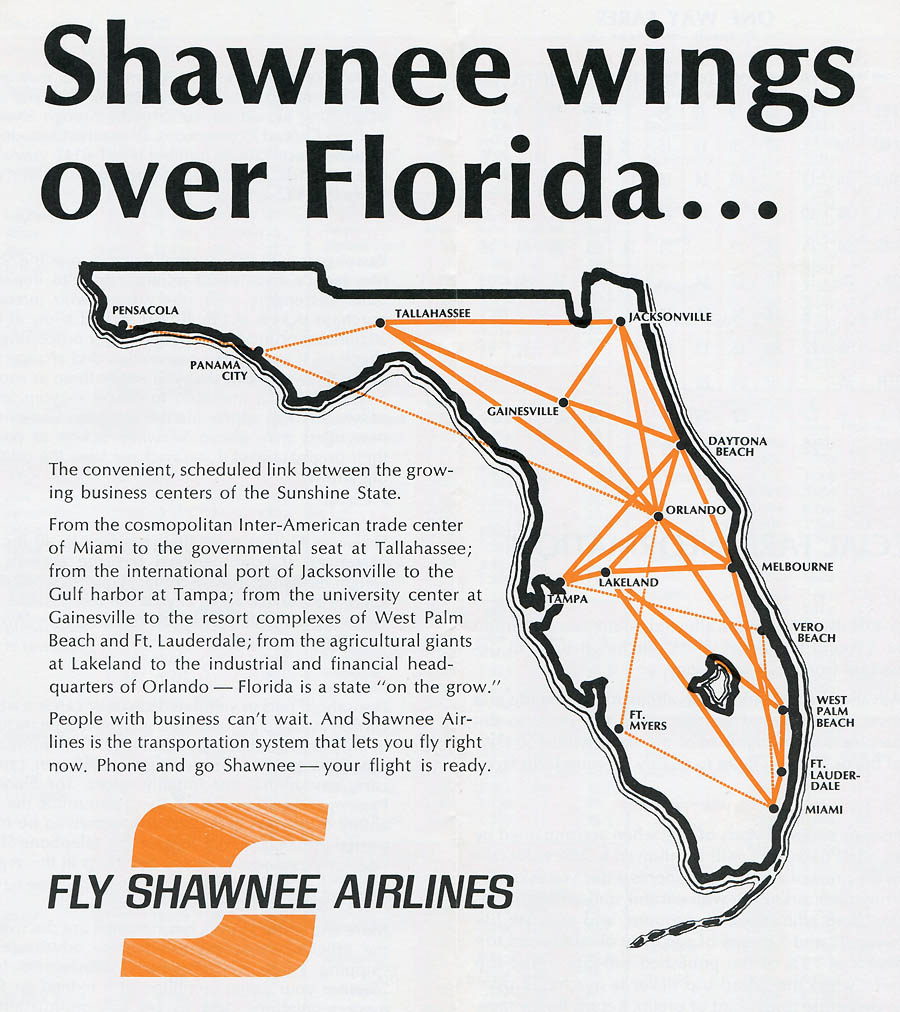 Twin Otters were purchased in the early 1970s and provided service to Walt Disney World's STOLport and major Florida cities. 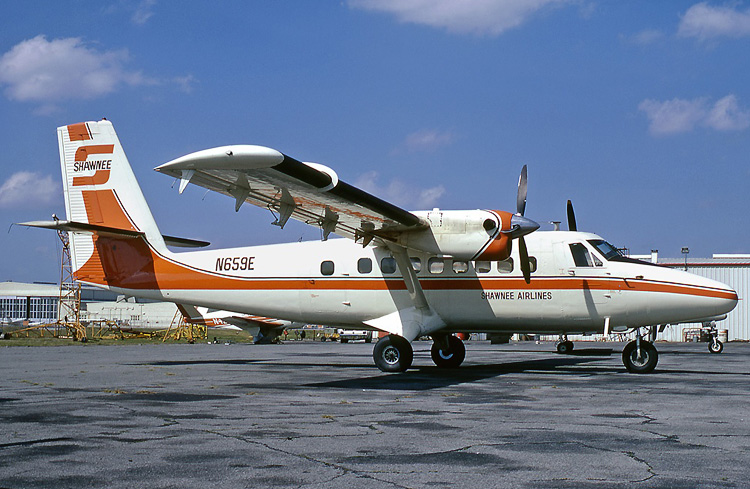 Twin Otters of Executive and Shawnee Airlines are greeted by Mickey Mouse as they arrive at Walt Disney World's Lake Buena Vista STOLport in this 1971 photo. Courtesy of Billy Launders. 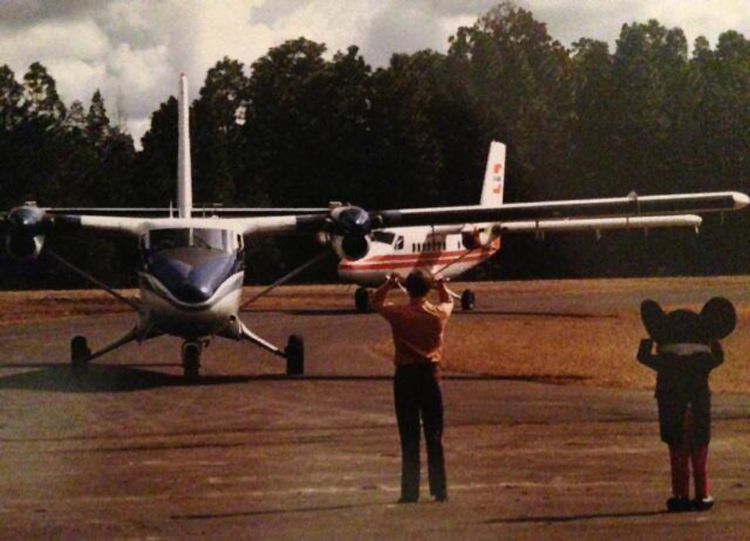 This 44-passenger FH-227, N379NE, was leased from Northeast Airlines and operated between Orlando, West Palm Beach, Ft. Lauderdale and the Bahamas during 1971-1972. 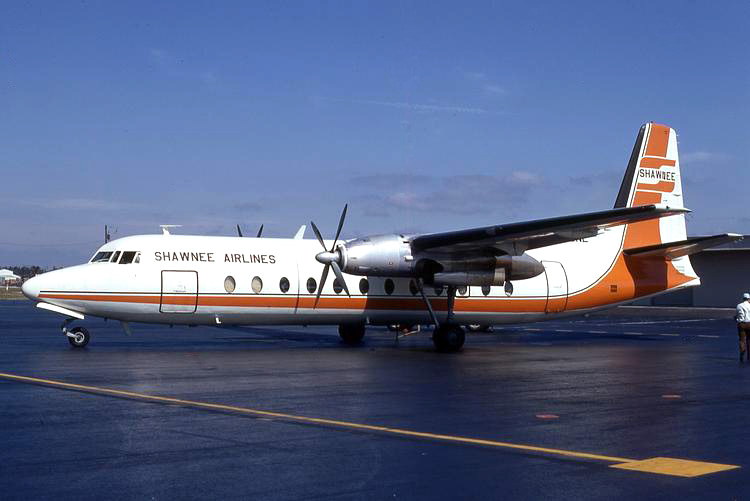 Shawnee operated a sizable DC-3 fleet in the mid 1970s. 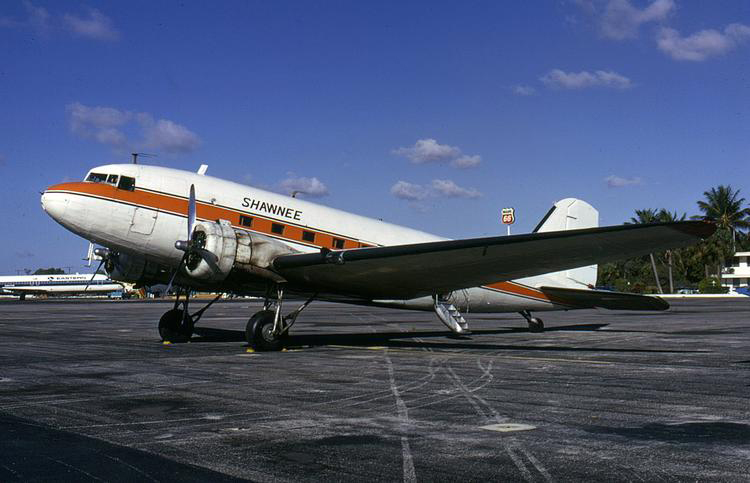 Shawnee introduced this stunning tropical paint scheme on DC-3 N1301 when it became a subsidiary of Florida Airlines in 1975. 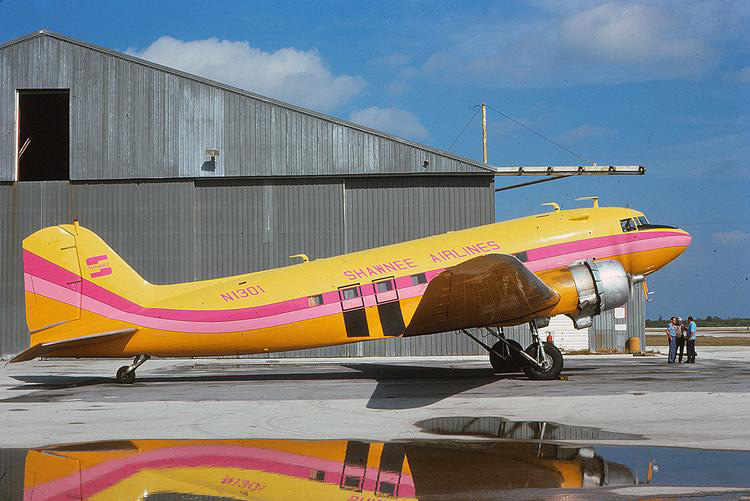 Martin 404s joined the fleet in 1976 and were used on lucrative routes to the Bahamas. 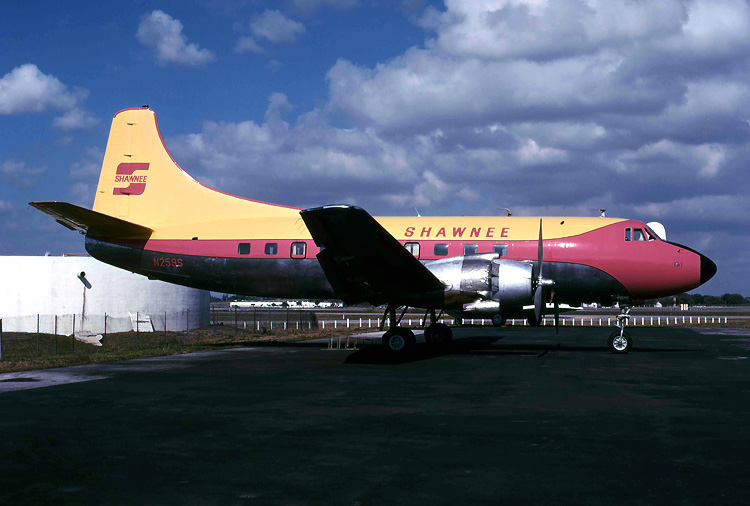 DC-3 N45366, seen at Sarasota in January 1977, sports yet another variation of the hot pink / yellow paint scheme. 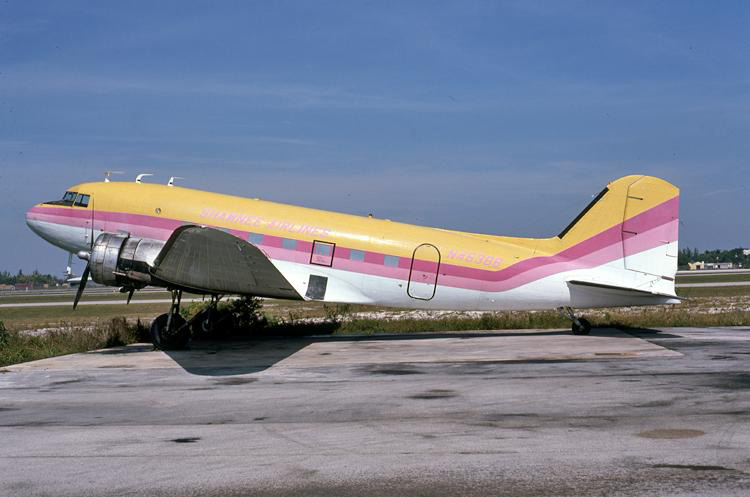 Shawnee was purchased by Air Miami in 1978 and was rechristened Shawnee International Airlines.  The airline initially flew between Florida and the Bahamas using a pair of de Havilland DH-114 Herons. Flights to the Florida Keys followed and additional Herons, Aero Commanders and a single DC-3 were also flown during 1978-1980.  This route map from 1978 shows that domestic routes had been abandoned in favor of flights to the Bahamas. 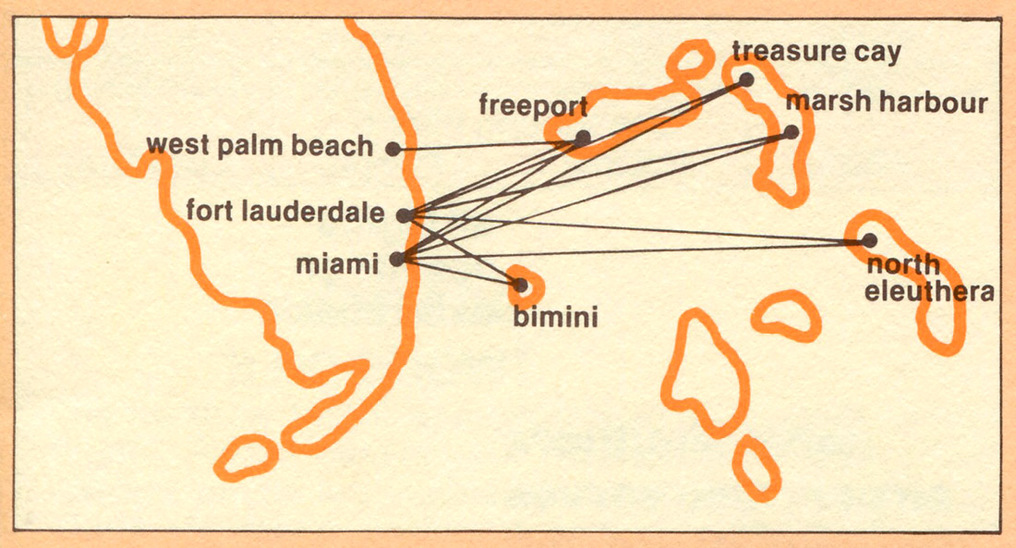 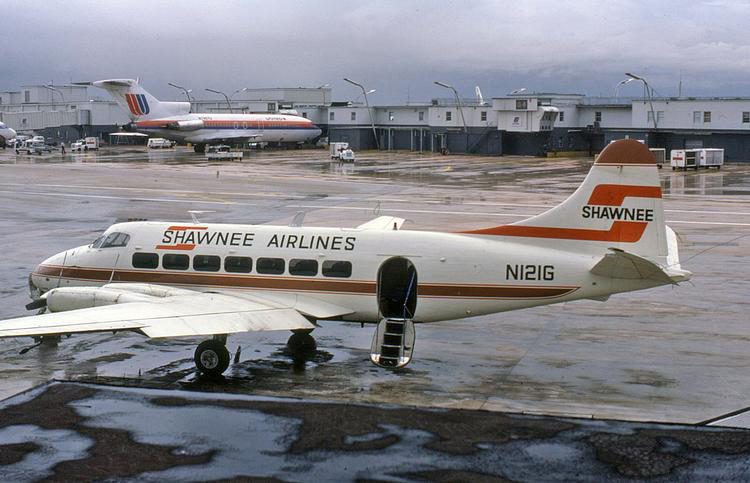 Shawnee operated two 6-seat Aero Commanders, including N6274B, on flights between Florida and the Bahamas. 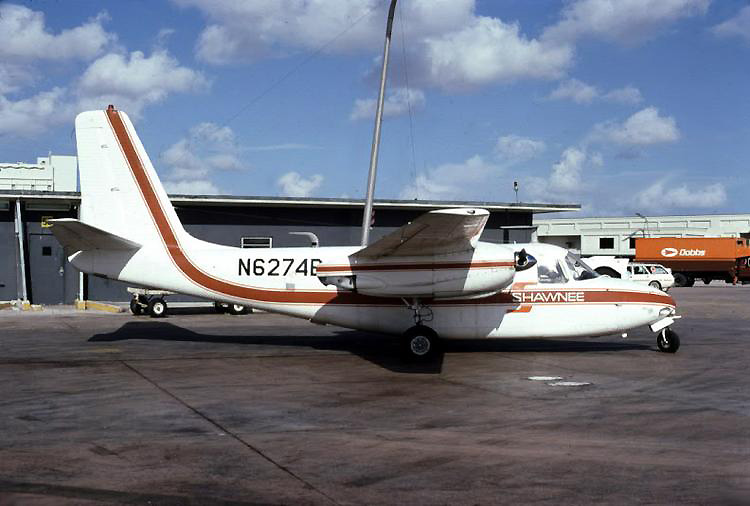 During its final incarnation, Shawnee flew a single DC-3, N11BC. It was later re-registered N3XW and continued to fly with Air Miami and North American Airlines. 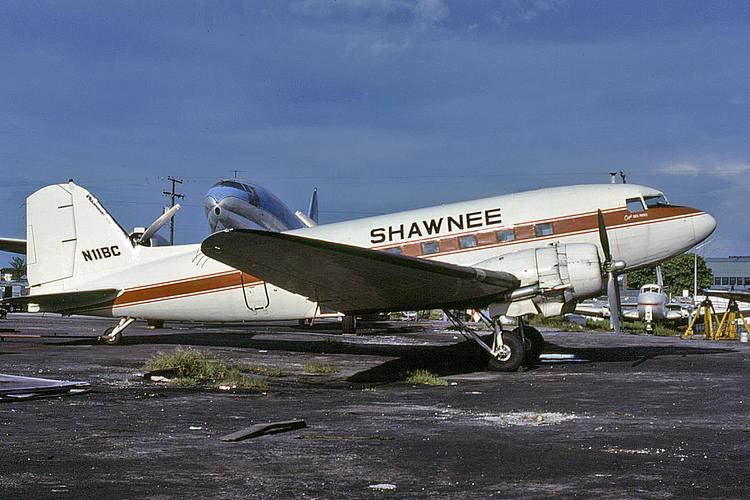