Part two: 1972-1979
Marco Island Airways was organized as a subsidiary of the Marco Island developer Deltona Corporation in 1972 and began flights to Miami on October 1st of that year using 15-seat Beechcraft B-99s. The service was such a success that the airline soon added several 40-passenger ex-Southern Airways Martin 404s to the fleet to handle heavy passenger loads, especially during the peak winter season.

In the photo below, Martin 404 N968M heads for the runway with a pair of Beech 99s visible in the background. 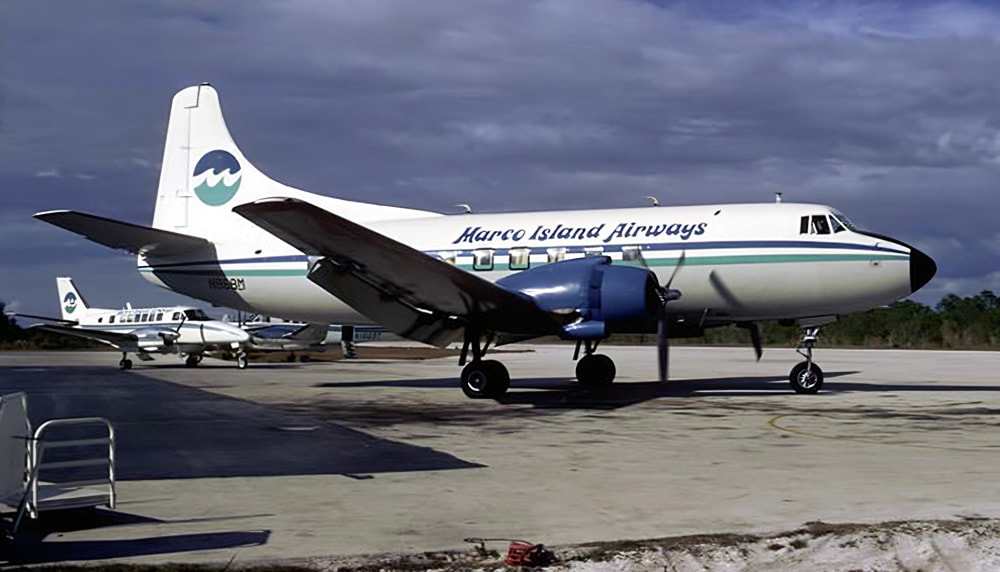 With the creation of Marco Island Airways, the Deltona Corporation barred other airlines from using the airport. Naples Airlines President John Van Arsdale said, "We have developed a good business with passengers to Marco Island since 1965. Now the Deltona Corporation plans to take it all away from us and start its own airline. This certainly would not seem to be in the interest of visitors and residents of Marco Island". Forced to terminate service to the airport in late September 1972, Naples Airlines continued to transport their passengers between Naples Airport and points on Marco Island via limousine.
This 1973 view shows a new addition to the airport terminal. During the peak season, these facilities were stretched beyond their capacity. The Airline Encyclopedia reports that Marco Island Airways boarded 52,140 passengers in 1974 and 54,583 passengers in 1975, the last full year that the old airport was in operation. Photo courtesy of the Marco Island Historical Society with special thanks to Austin Bell. 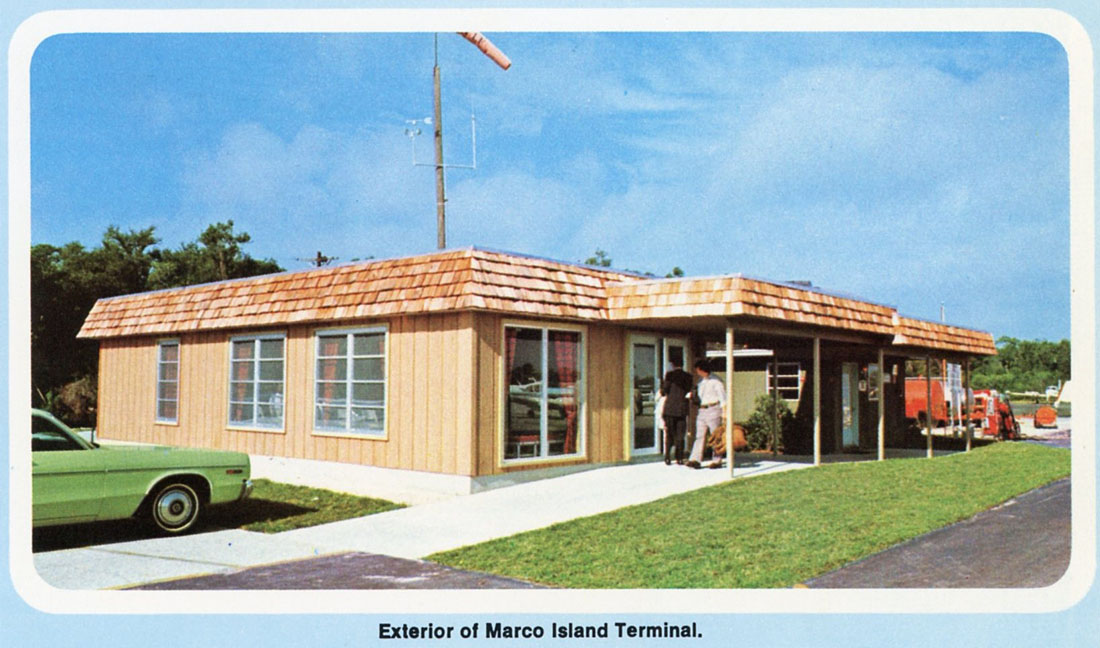 An aerial view of the old Marco Island Airport taken in 1973, North Collier Blvd. runs up the left side of the photo and San Marco Road runs across the bottom. 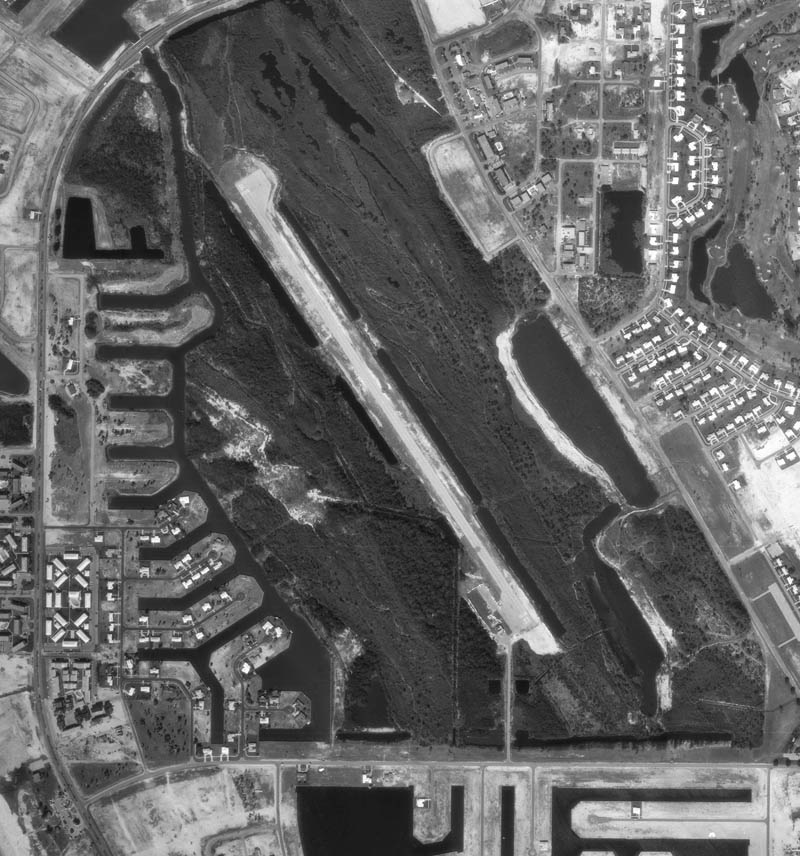 Here's a detail of the above photo showing the terminal and tiny ramp area. There was barely enough space to land a Martin 404 when another was parked at the terminal. 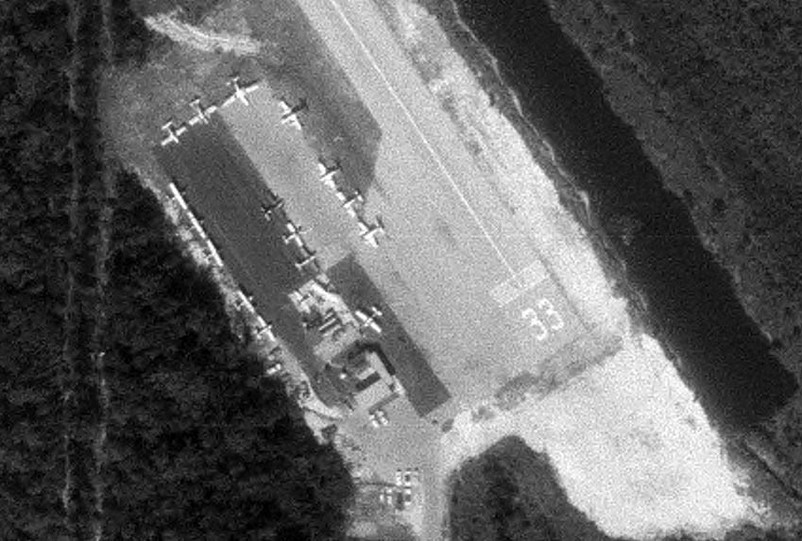 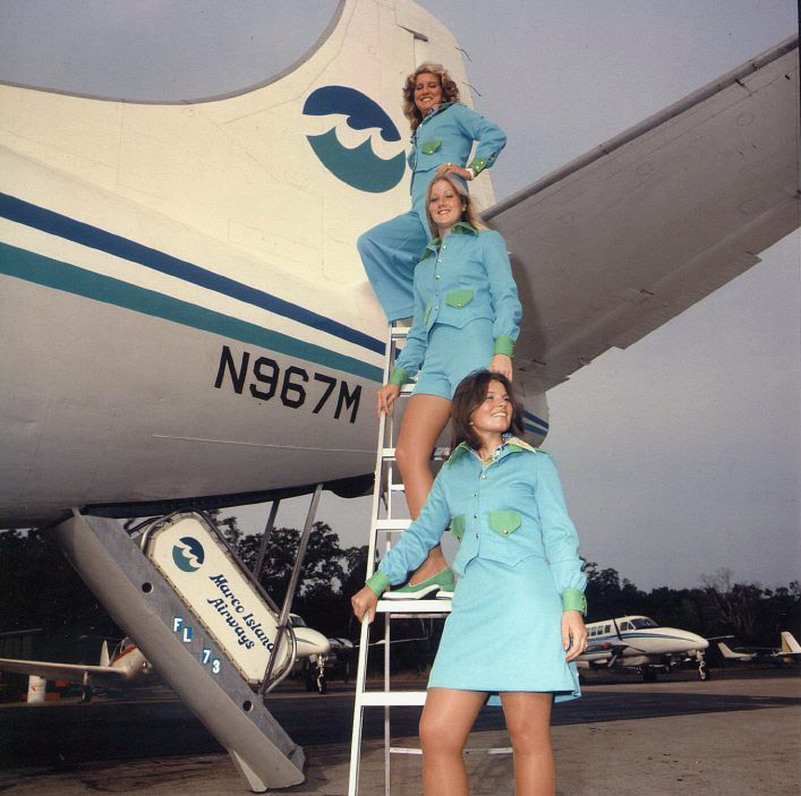 Marco Island Airways flight schedule effective September 15, 1976 with an advertisement for the Marco Beach Hotel and Villas on the back cover. 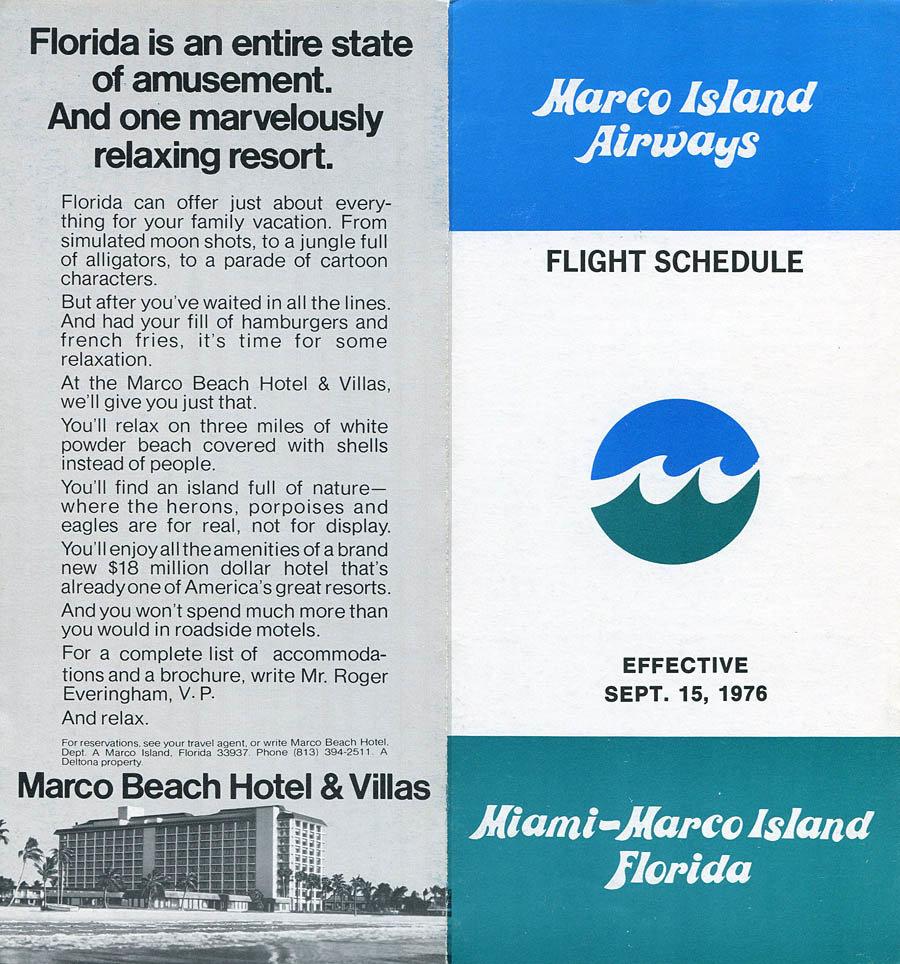 Marco Island Airways flight schedules varied little throughout the 1970s. Typically, three daily round-trips were flown between Miami and Marco. Boardings steadily increased through the decade and over 67,000 passengers flew the airline in 1979. 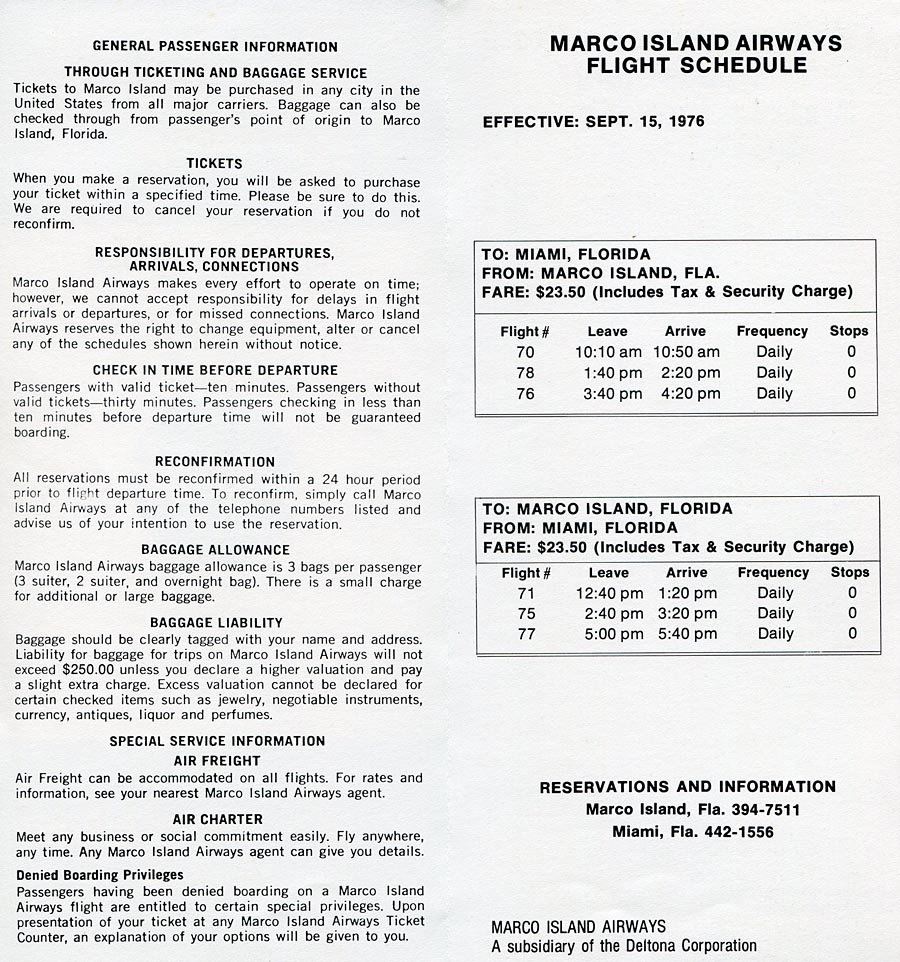 In 1972, Deltona began construction of a larger airport a few miles north of the island with a 5,000 foot runway that would easily be able to handle large commuter aircraft, private jets and the crowds of winter tourists (also allowing residential development of the former airport site). In September 1976, airline operations moved to the new $3 million facility. Though larger than its predecessor, the new Marco Island Airport had a nearly identical layout, consisting of a single runway with no taxiways with a small ramp and terminal near one end of the runway. This photo was taken during the grand opening. Courtesy of the Marco Island Historical Society. 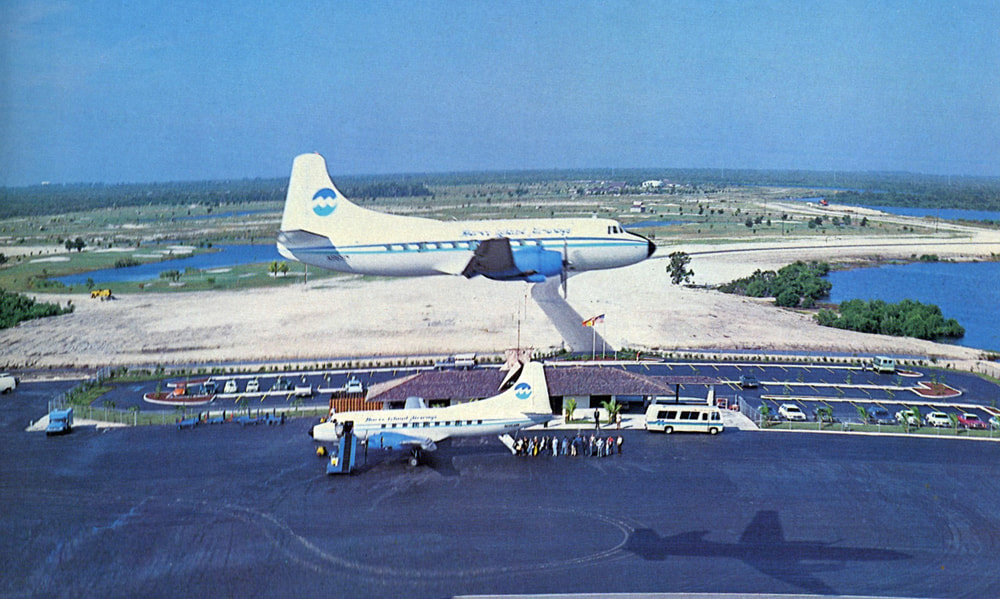 Here's a passenger's view from a Martin 404 landing at the new airport in October 1977. This photo was taken by aviation historian Geoff Goodall, and I highly recommend his website of aviation stories and images. 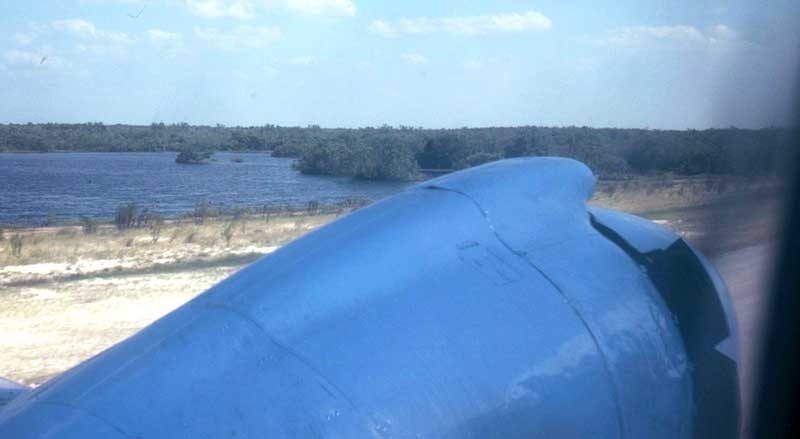 In part three of the airline history of Marco Island Airport, we look back at the big changes that took place in the tumultuous 1980s.