This is the first of a five part look back at the history of airline service at Bay County Airport at Fannin Field (KPFN), which served Panama City, Florida from 1945 to 2010.  Images courtesy of Brent Mooney, Björn Larsson and the Panama City Northwest Regional Library System.
Panama City Airport was established in 1945 on land adjacent to Atkinson Field airport, which had become outdated and was too small for the city's needs. The new airport was named Fannin Field in honor of the Panama City mayor at the time. The earliest commercial airline service was operated by National Airlines.

This excerpt of a National Airlines route map from January 1947, courtesy of Björn Larsson, shows Panama City as one of many intermediate stops between Jacksonville and New Orleans, although flights to Fannin Field did not actually begin until September 1948. National, one of the rare U.S. airlines to never own a DC-3, initially used Lockheed Lodestars on the routes. National served Panama City as a stop along east-west routes for the next three decades, with only minor variations in the route segments. 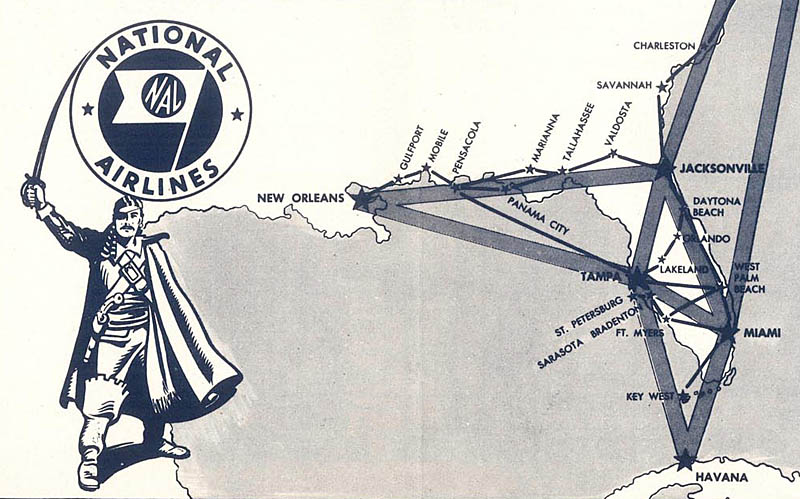 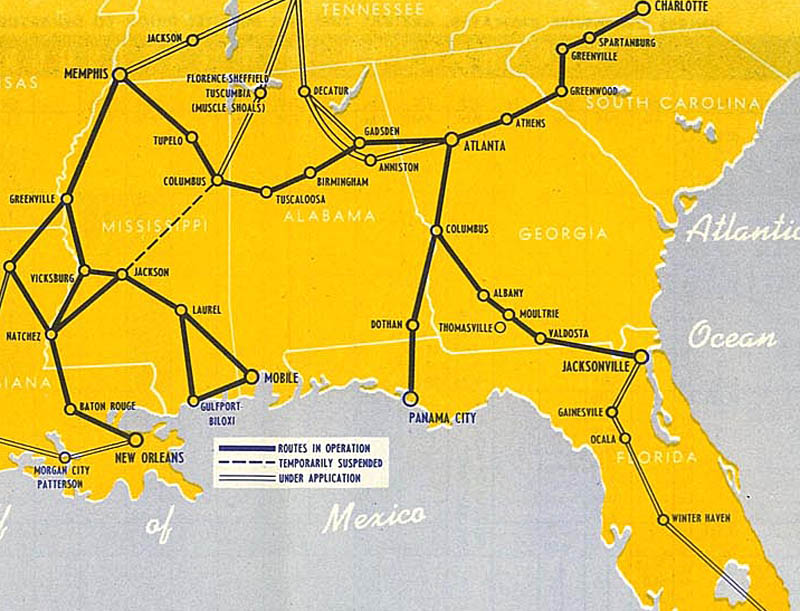 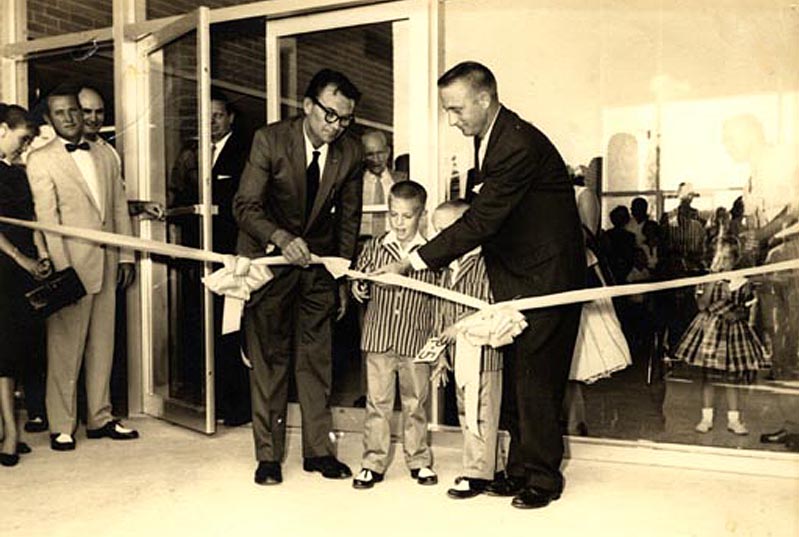 National Airlines began flying Convair 340 and Convair 440 aircraft to Panama City in the 1950s. The Lodestars remained in service through 1958. During the 1960s, National also used Lockheed Electra turboprops on flights at Panama City. 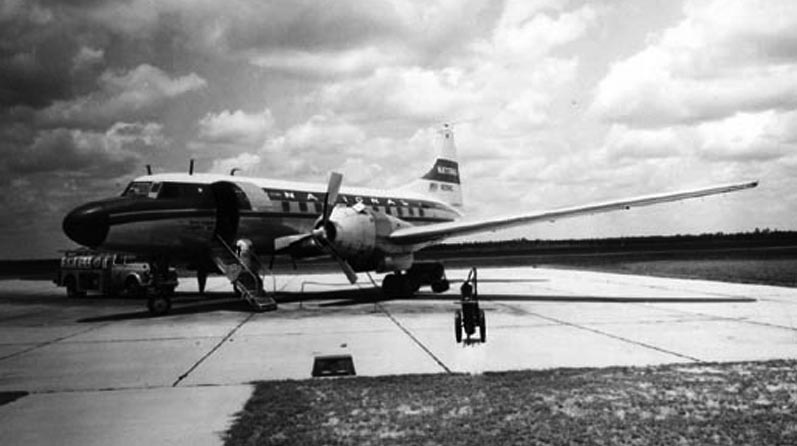 A new control tower was opened in 1967. A Southern Airways Martin 404 can be seen at the passenger terminal in the background to the left of the tower. 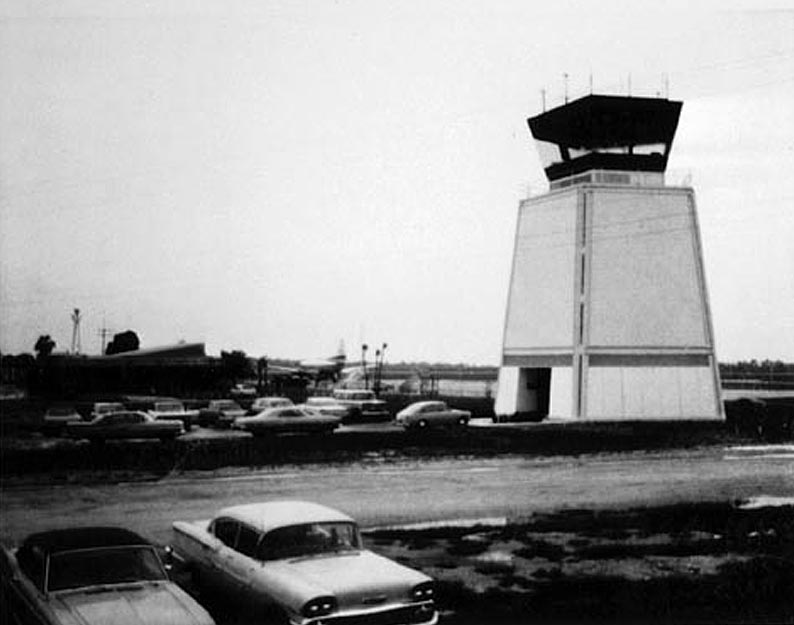 A 1967 interior view of the new control tower. 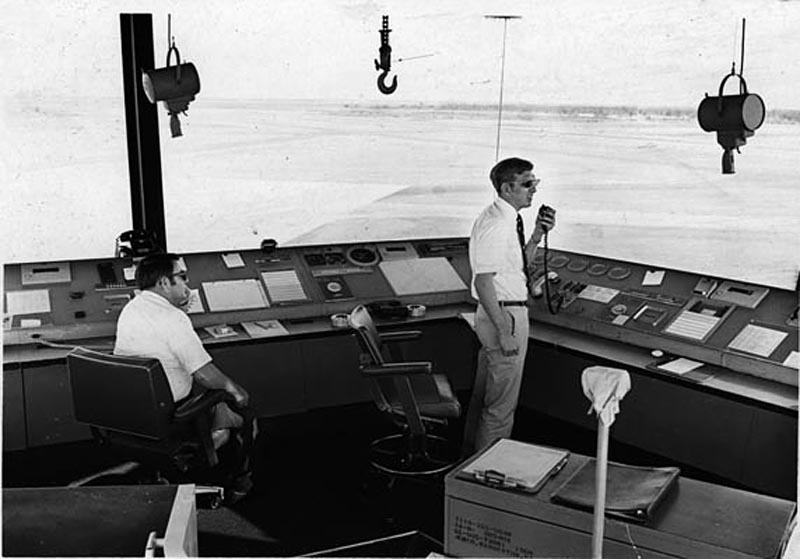 National became an all-jet airline in 1968 and replaced their turboprop Electras with brand new Boeing 727 tri-jets painted in the modern orange and yellow "Sun King" livery. The following photos are presumably press shots taken on the first day of 727 jet service to Panama City in 1968. 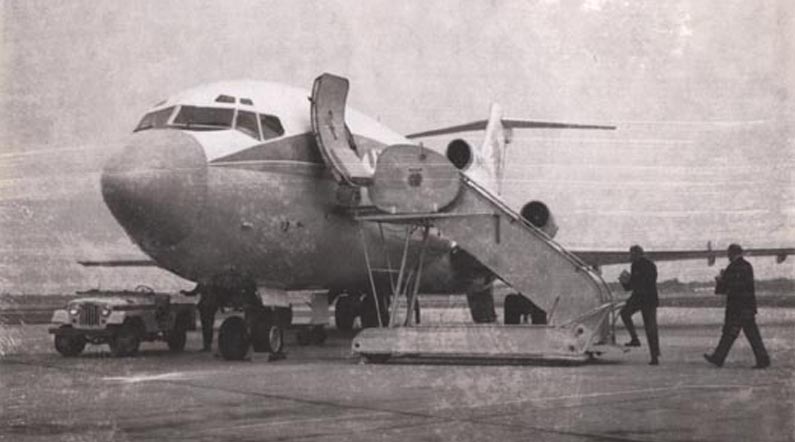 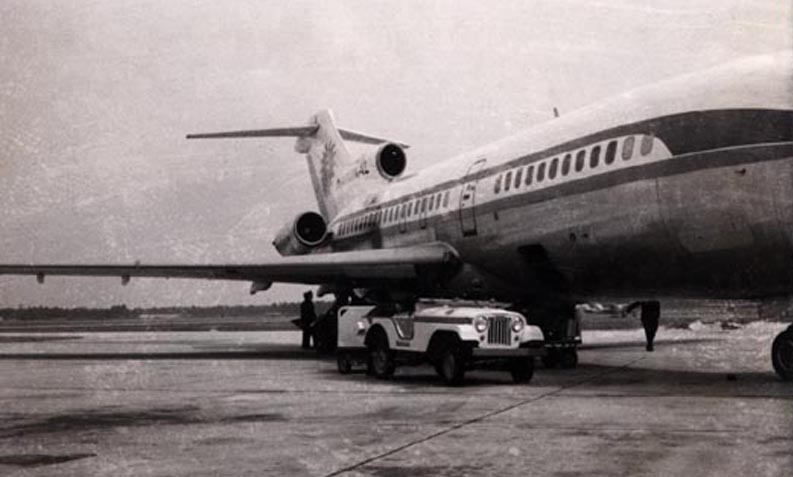 This 1968 view from the control tower shows a Southern Airways DC-9 and National Airlines 727 parked on the ramp. A September 1968 timetable shows that Southern was operating an average of five flights a day from Panama City: one DC-9 jet flight direct to Atlanta with a stop in Dothan, Alabama, two 40-passenger Martin 404 propeller non-stops to Atlanta, one Martin 404 flight to Dothan (with direct service to Montgomery and Birmingham), and one Martin 404 non-stop to Eglin Air Force Base, FL with continuing service to New Orleans. National continued to serve Panama City as one of numerous stops between Jacksonville and New Orleans with a total of four 727 flights, two in each direction. 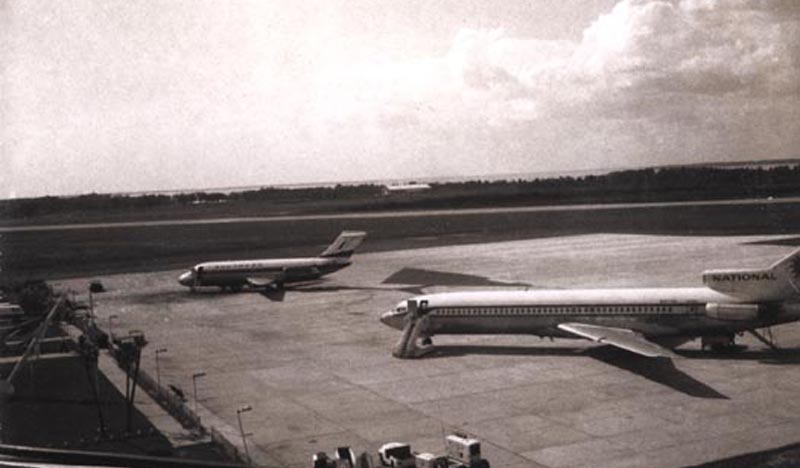 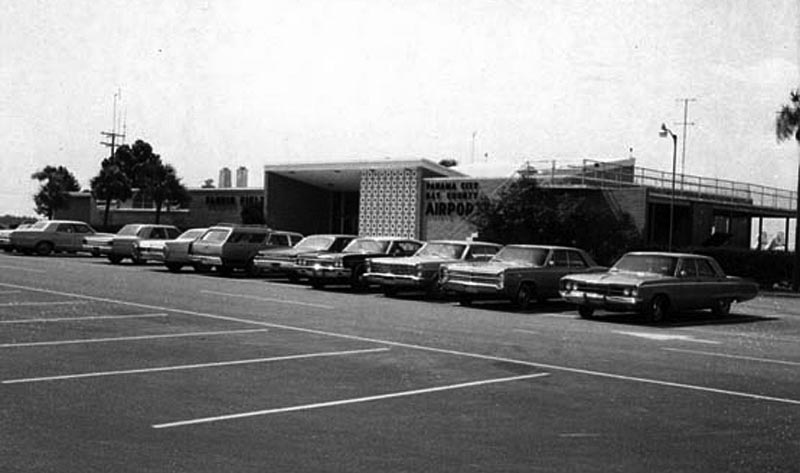 Here's a view of the parking lot booth with the terminal in the background. If you look closely, you can barely make out the tail of a National Airlines 727 just behind the right side of the terminal. (The high contrast makes it difficult to see.) 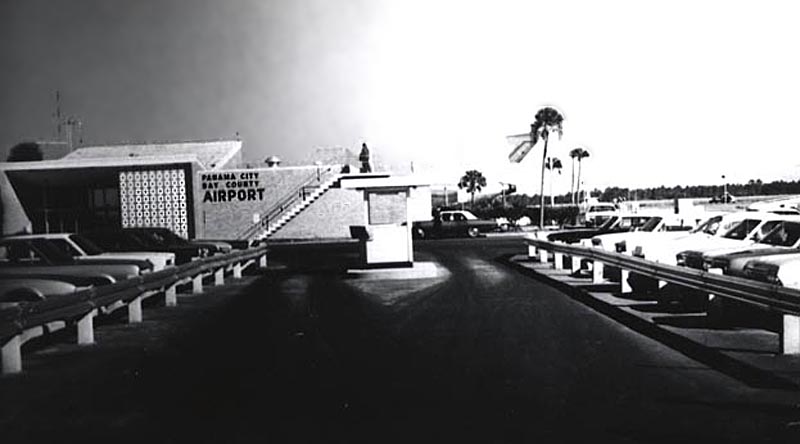 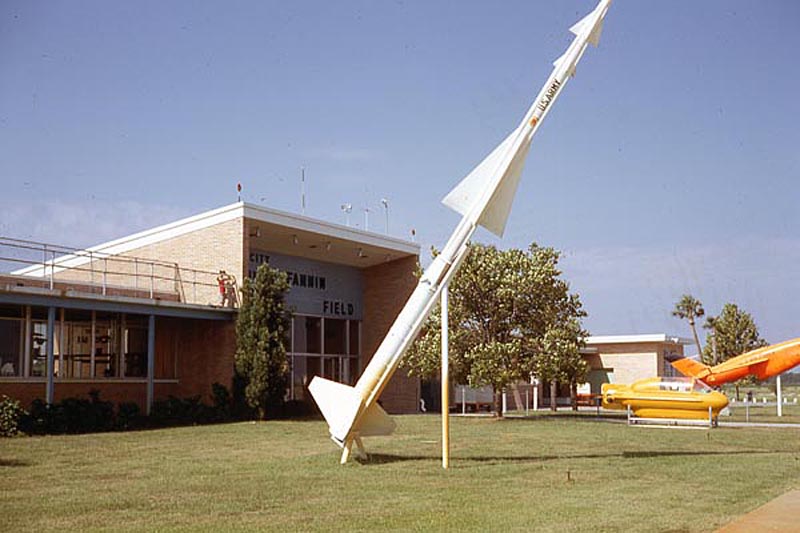 Another 1968 view of the Panama City Airport terminal. Notice the reflection of a National Airlines 727 in the windows. 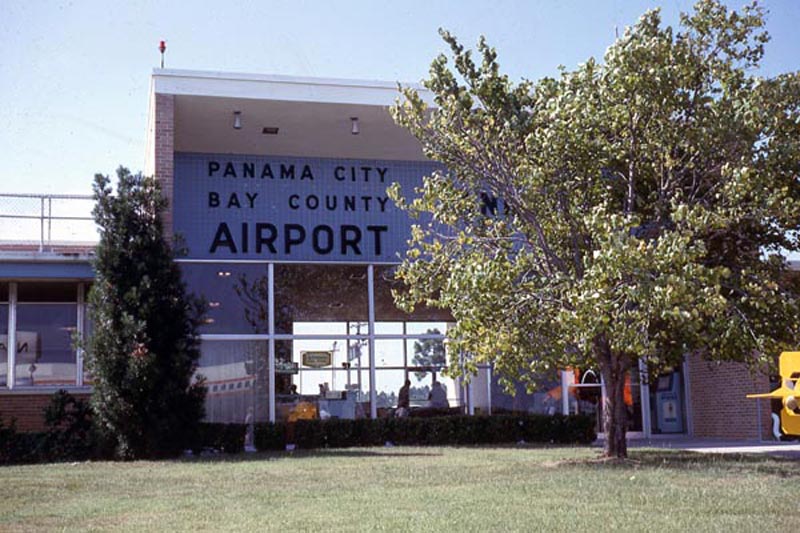 Terminal building interior, circa 1968. Sign on left says "We're happy! Signed, Your Airport Authority." The sign on the right says "We'll decide later! Signed, The City." (Anyone know the story behind that?) 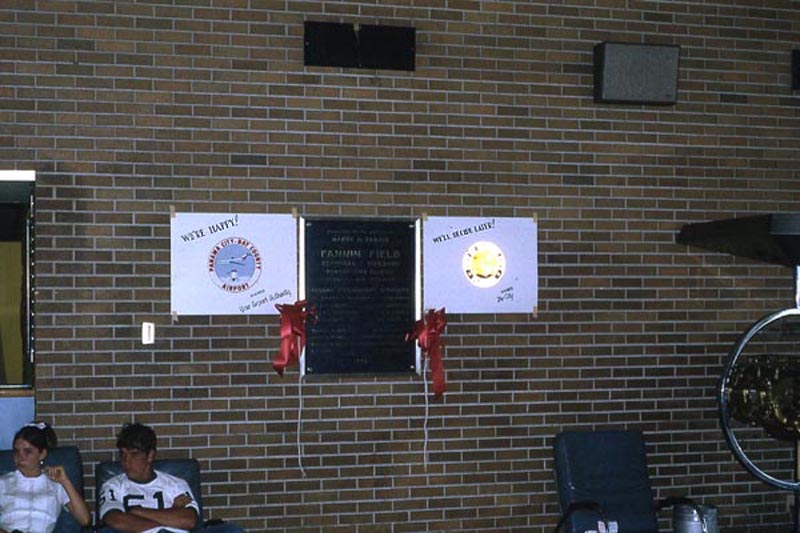 Next week we will take a look at airlines at Panama City Airport in the 1970s and the big changes that occurred with airline deregulation late in the decade. Do you have any stories or photos of the old Panama City Bay County Airport? Please CONTACT ME!