PANAMA CITY AIRPORT IN THE 1970s

This is the second installment of a five-part look back at the history of the closed Fannin Field / Bay County Airport (KPFN) in Panama City, Florida. Images courtesy of Brent Mooney, the Panama City Northwest Regional Library System and the Sunshine Skies collection. If you missed part one, you can see it here.

As the 1970s began, Panama City Bay County Airport continued to be served by major airline National Airlines on primarily east-west routes while local service carrier Southern Airways provided service to points north. The October 15,  1971 issue of the Official Airline Guide shows a total of 13 flights a day into Panama City between the two airlines. All but two of those flights were operated with jet aircraft.

Here's a 1970s curbside view of the passenger terminal at Bay County Airport. 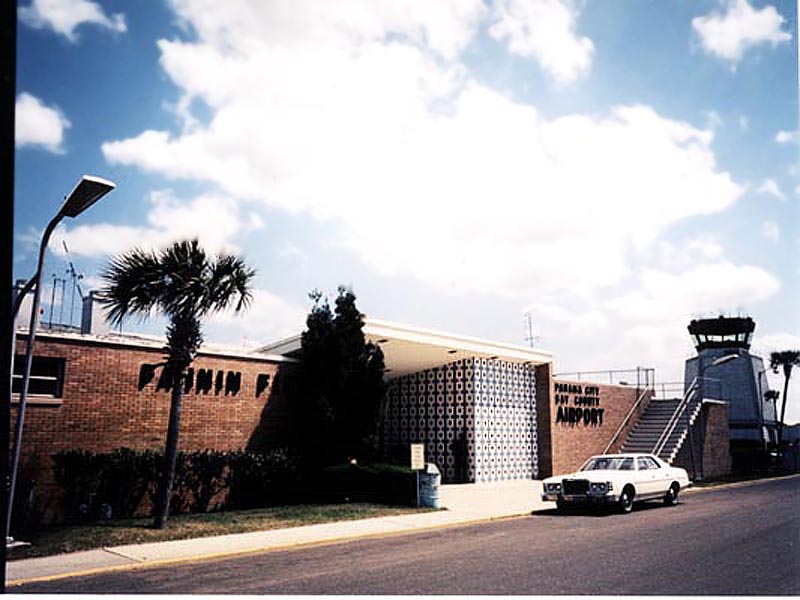 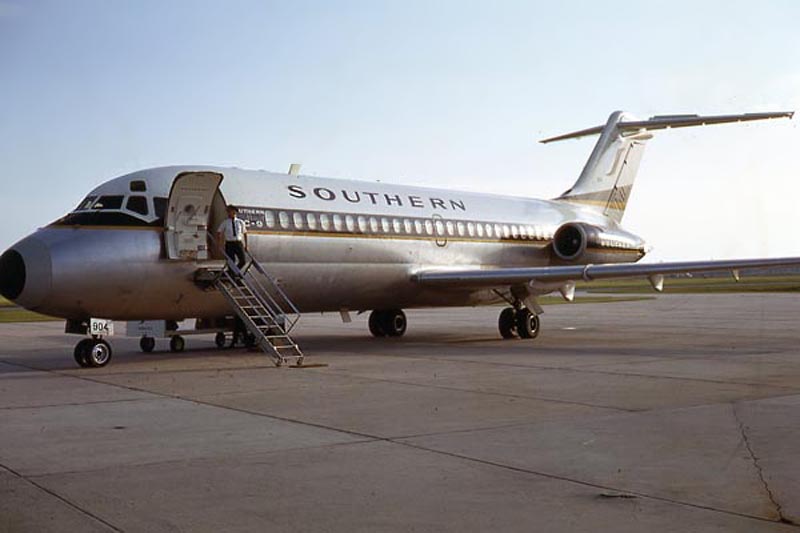 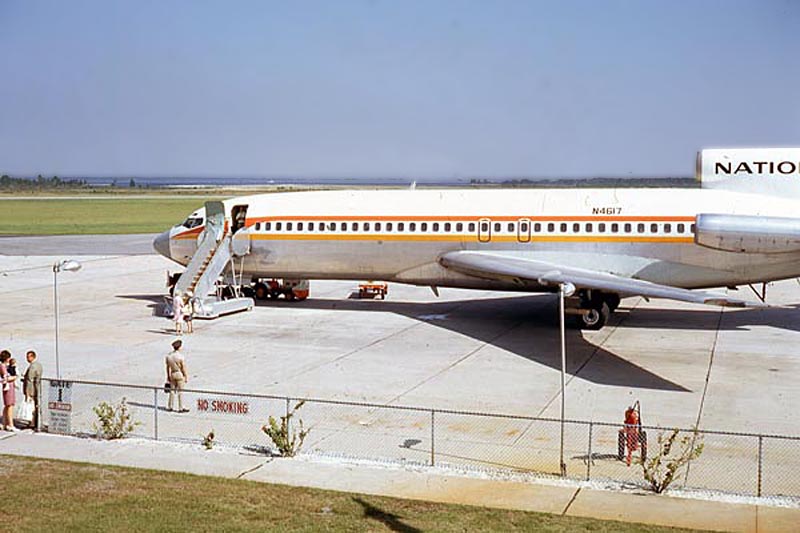 Here's a wide view of the passenger terminal from the early 1970s. A National Airlines 727 is parked at the gate. 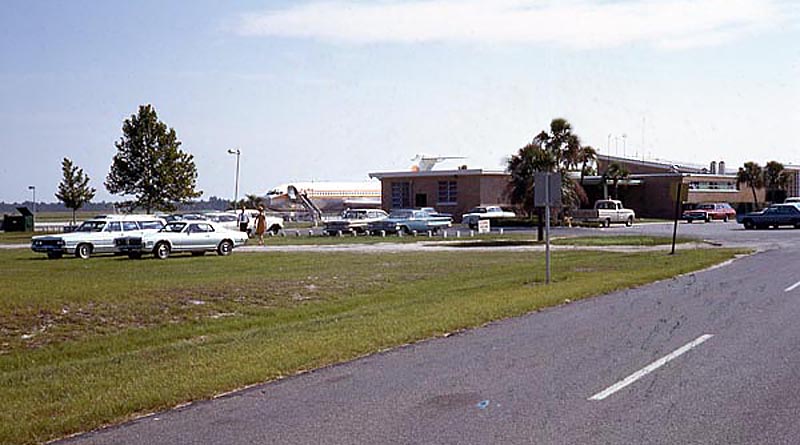 A 1972 view of the entrance road at Bay County Airport showing a departing National 727. 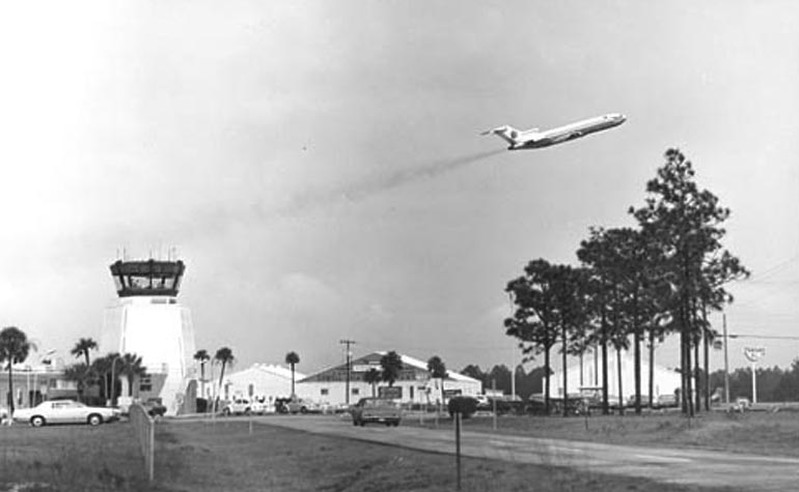 Shawnee Airlines, a commuter airline based in Orlando, operated Beechcraft B-99 turboprops to Panama City from Pensacola and Tampa during 1971 and 1972 with direct service from Miami, Ft. Myers and Sarasota. 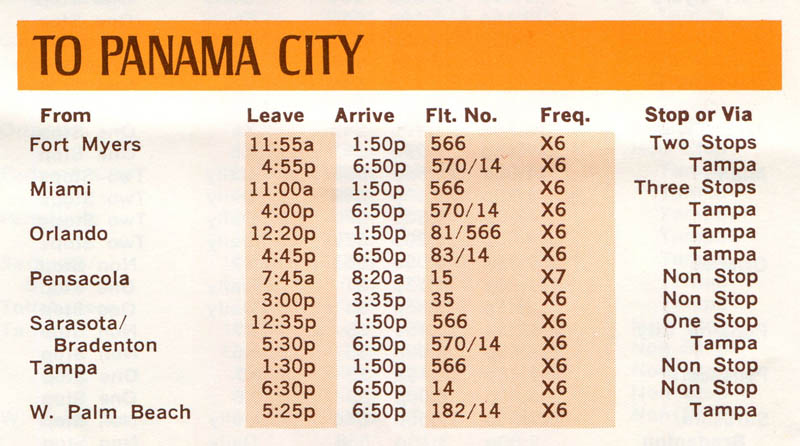 This is a view of the Sowell Aviation Company which offered flight training and aircraft services at Bay County Airport. 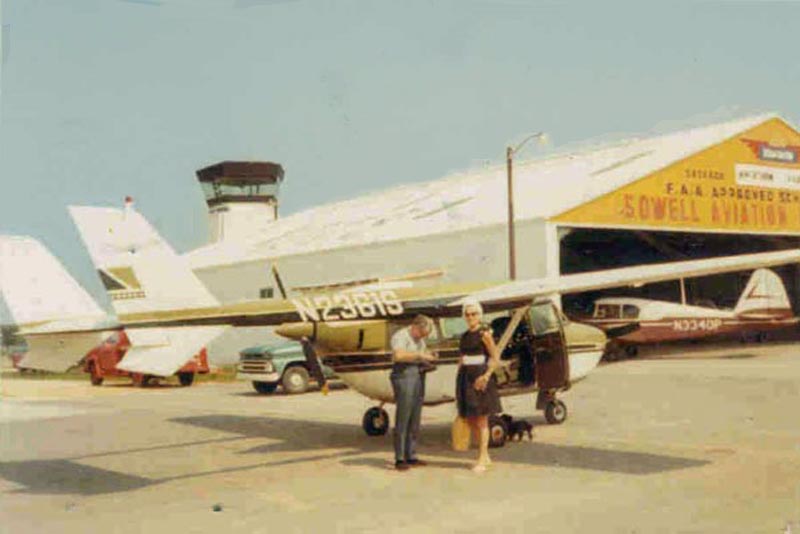 An early 1970s aerial view of the airport showing the control tower near the center of the photo and the passenger terminal to the left of that. The airport had two perpendicular runways,  14/32 and 5/23. As seen in the following series of photos, runway 14/32 (at right) was extended into North Bay during the 1970s to better accommodate jet aircraft. 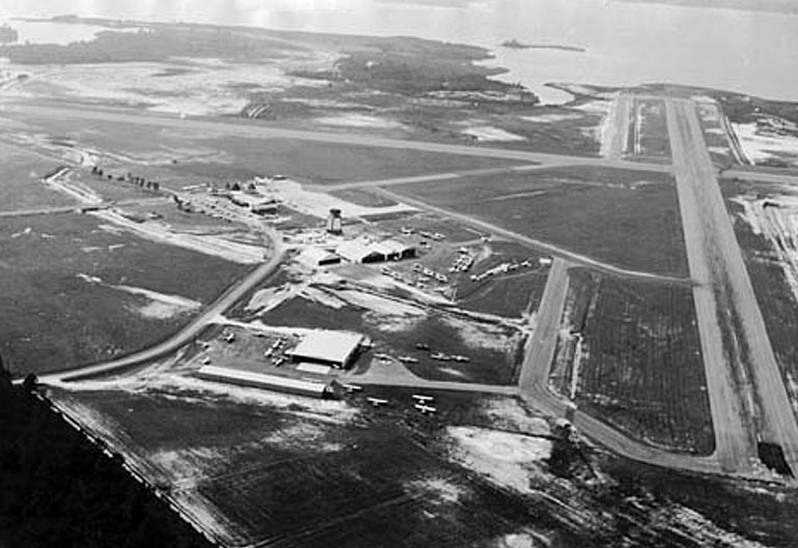 Aerial view showing the completed runway extension, although it appears that the taxiway had not yet been finished. 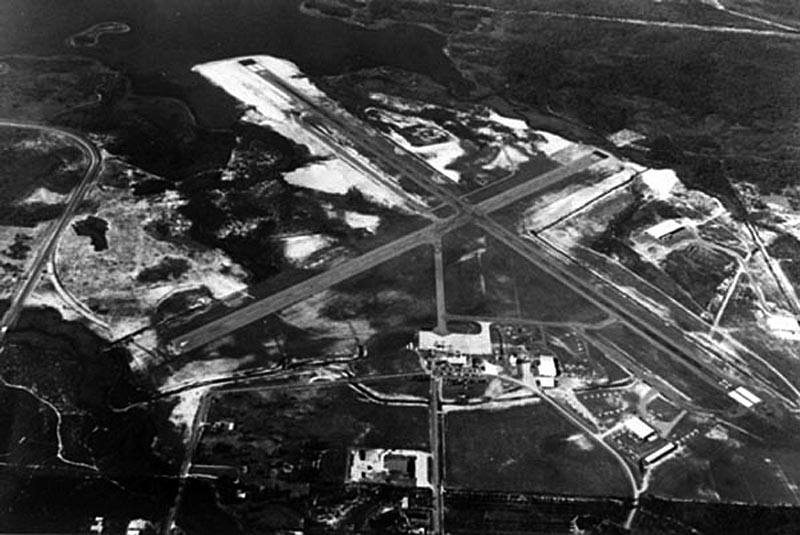 This view shows the completed expansion at the top of the photo, with runway landing lights extending out into the bay. Taxiways that run the entire length of the runways had also been constructed. In this perspective, the passenger terminal is beyond and to the left of the control tower. 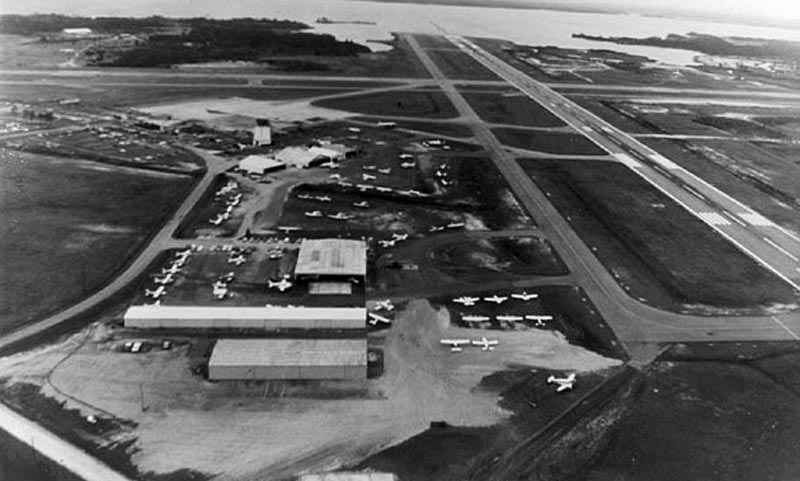 Panhandle Airways served Panama City from 1977 to early 1978, using classic Beech 18s on routes to Pensacola, Tallahassee and Tampa. This undated timetable from 1977 shows service on a Pensacola - Panama City - Tallahassee route with two flights in each direction. By the end of 1977, Panhandle also added two round trips on a Tampa - Panama City - Pensacola route for a total of eight weekday departures and eight arrivals at Bay County Airport.
During 1977, South Central Air Transport, or SCAT, flew Handley Page Jetstream turboprops between Panama City and New Orleans with stops at Eglin AFB and Mobile.

SCAT merged with Air Illinois on December 1, 1977 and service to Panama City was reduced to a single flight a day. Within a few months, they left Panama City altogether. Thanks to Don Henchel for these timetable scans! 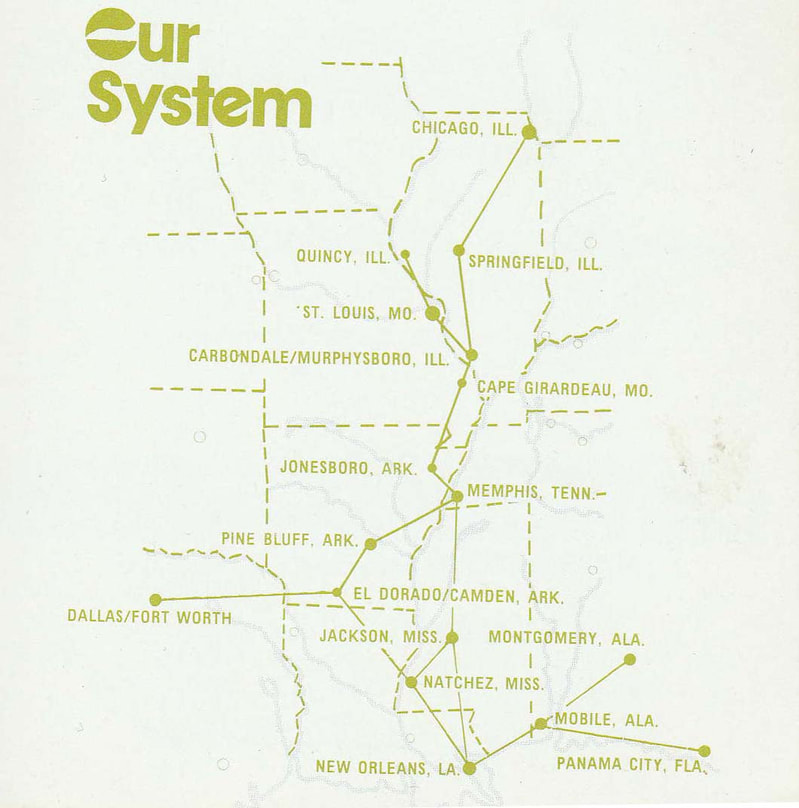 Intrastate airline Air Florida inaugurated service to Panama City in 1978 with DC-9 non-stops to Tallahassee and Pensacola. By June 1979 the service had been reduced to one flight a day, as part of a circular Miami - Tampa - Pensacola - Panama City - Tallahassee - Tampa - Miami flight. 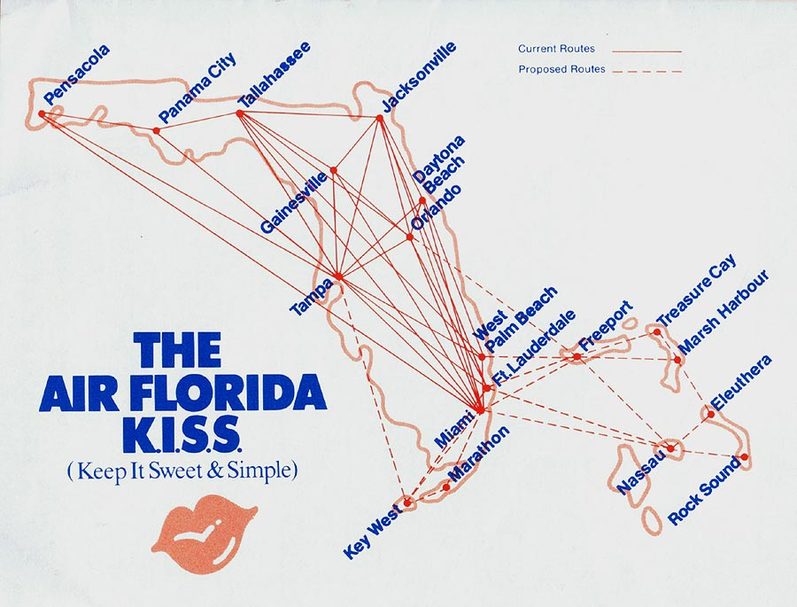 In the years leading up to the passage of deregulation on October 24, 1978, the Civil Aeronautics Board relaxed regulations on airlines, allowing them to reduce or discontinue service on routes that were unprofitable. With the entrance of Air Florida, National Airlines cut service at Panama City to a single flight per day by September 1978, the terminating point on a marathon San Francisco - Las Vegas - Houston - New Orleans - Pensacola - Panama City trek operated with 727-200s. After deregulation, National was no longer obligated to serve unprofitable routes and the airline abandoned Panama City altogether by early 1979. 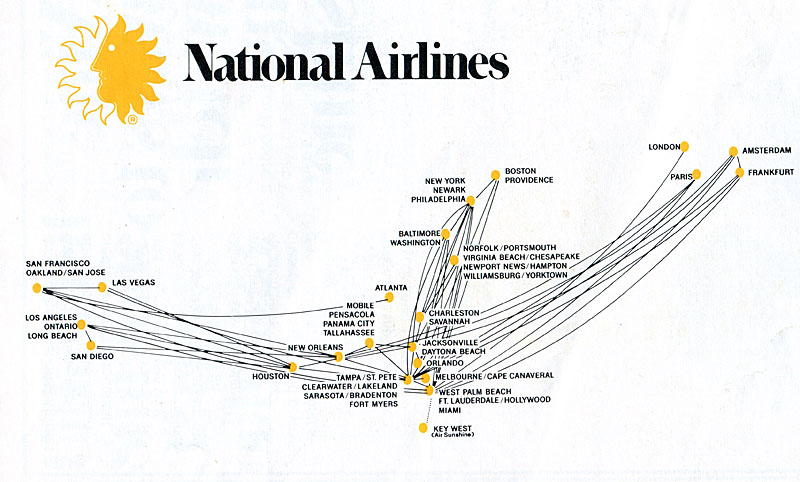 Southern Airways merged with North Central Airlines on July 1, 1979 to form Republic Airlines. As the 1970s came to an end, Republic served Panama City with five DC-9 flights a day: three non-stops to Atlanta, one to Orlando and one to Tallahassee. Single plane direct flights were offered to Chicago, Memphis, Huntsville and Miami. Below: a detail of Republic Airlines route map effective October 28, 1979. 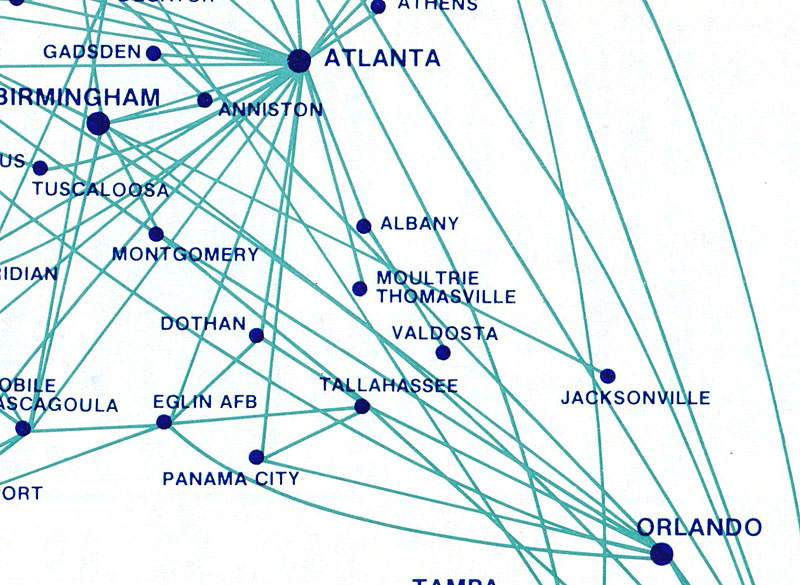 Next, we'll look back at Panama City Airport in the 1980s and witness the massive changes in air service in the aftermath of airline deregulation.

NEXT WEEK: Panama City Airport in the 1980s