The opening of Atlanta's midfield terminal in September 1980 was the result of 16 years of planning and preparation. As traffic overwhelmed the "Jet Age" terminal almost immediately after its opening, the city funded studies in 1964 to determine how to handle the explosive growth that was certain to mire the airport in gridlock in the near future. After a two year study period, the Atlanta Region Metropolitan Planning Commission issued its report and the city was stunned by the results. The ARMPC recommended virtually abandoning the brand new Jet Age terminal in favor of a new midfield terminal that could be continually expanded to handle growth. It also recommended building additional east-west parallel runways. The plan required that the city purchase at least 1,200 acres surrounding the airport, necessitating the removal of nearly 1,000 homes in College Park and Hapeville. Additional airport design consultants were commissioned to revise and refine the master plan which was finally revealed in 1967. Image credit: Eastern Airlines Digital Collection. 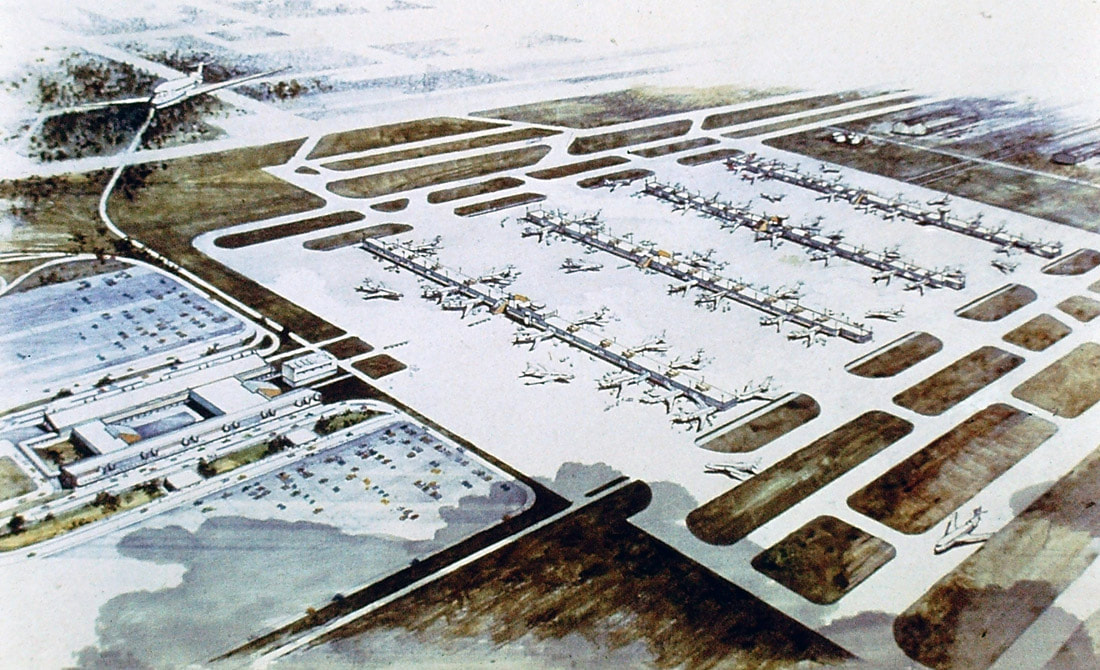 This photo was taken shortly before the opening of the second parallel runway in December 1964. The bold plan revealed two years later would set into motion the design and construction of the midfield terminal on the site of the neighborhood seen at bottom left. 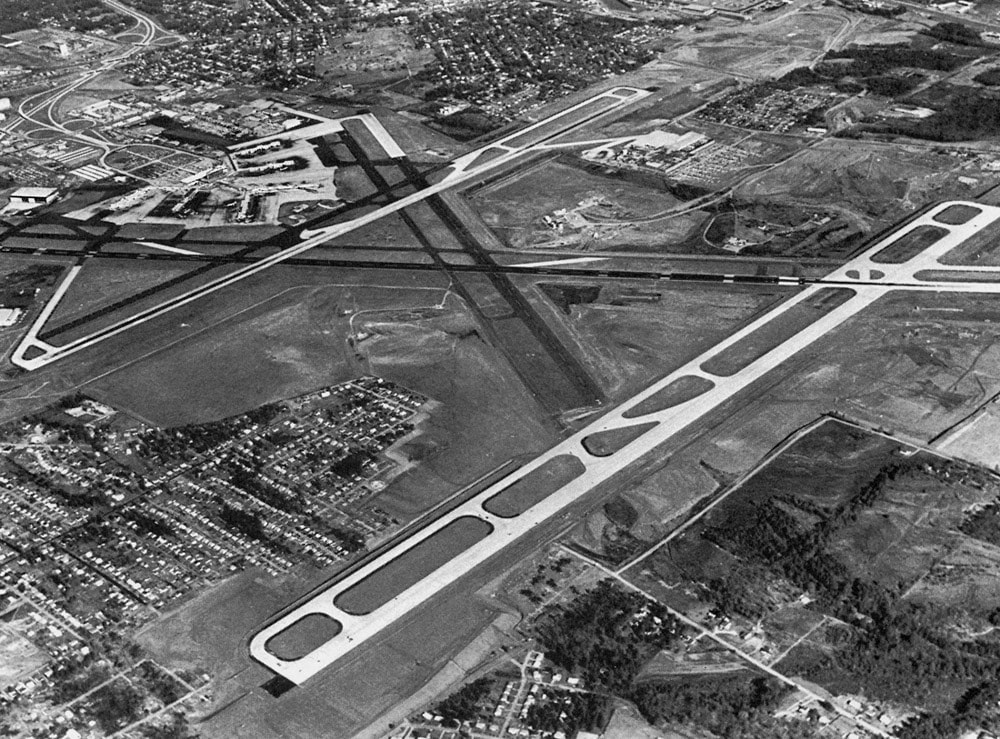 The expansion plans were sent to surrounding communities and revealed publicly in May 1967. 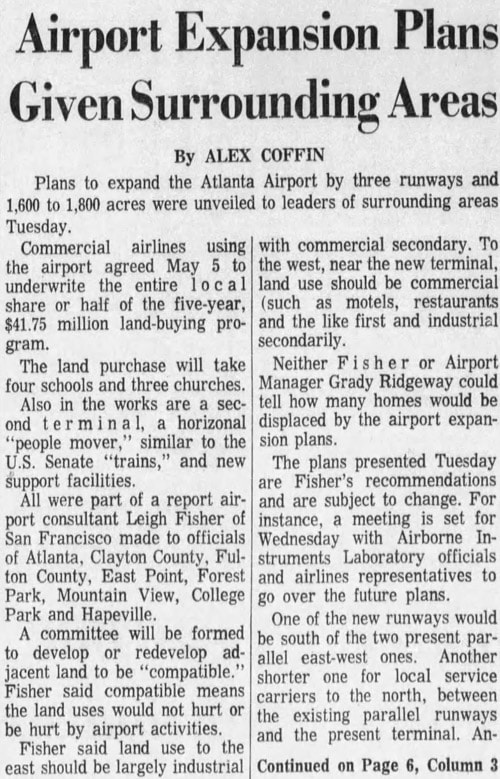 This map of the initial expansion plan appeared in the May 22, 1967 edition of the Atlanta Constitution. The site of the new terminal is shown as a shaded rectangle at left. The proposed second parallel northwest - southwest crosswind runway was never built but the two additional east-west runways were. 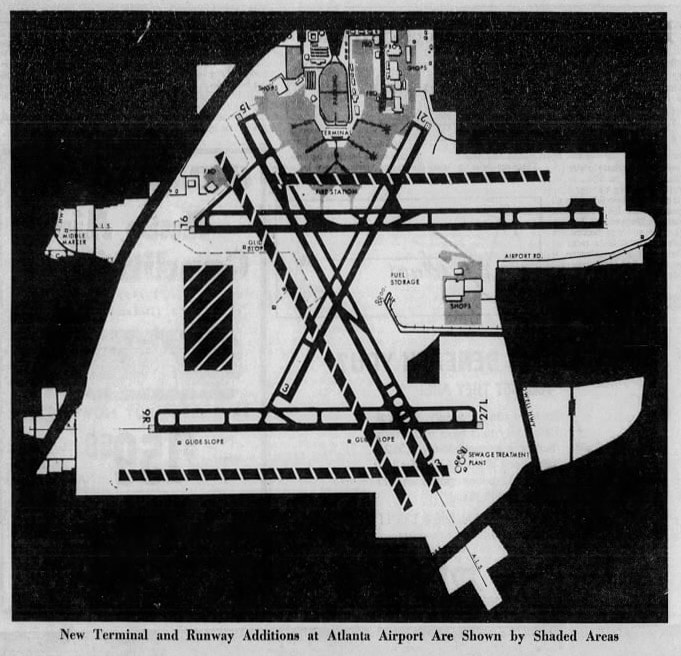 This is just a portion of one of several Atlanta Airport Development Relocation Plan maps published in the late 1960s that show communities affected by the expansion. Every little rectangle and square is a house that would have to be razed or relocated to make way for the new terminal. 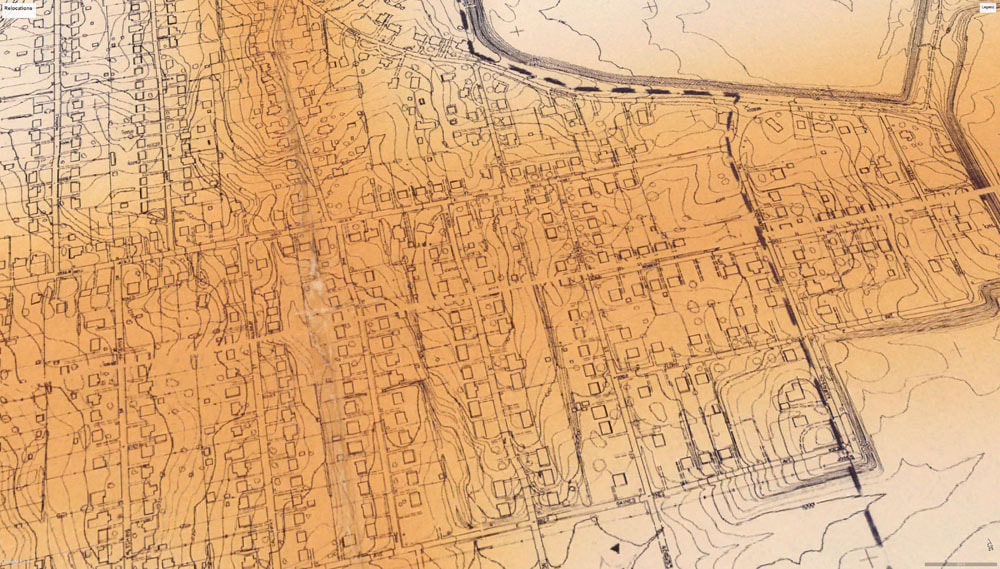 The same map with Google 3-D buildings overlaid gives a startling perspective to the scale of change that occurred. From left to right are the main terminals and concourse T, concourse A, B, and C. 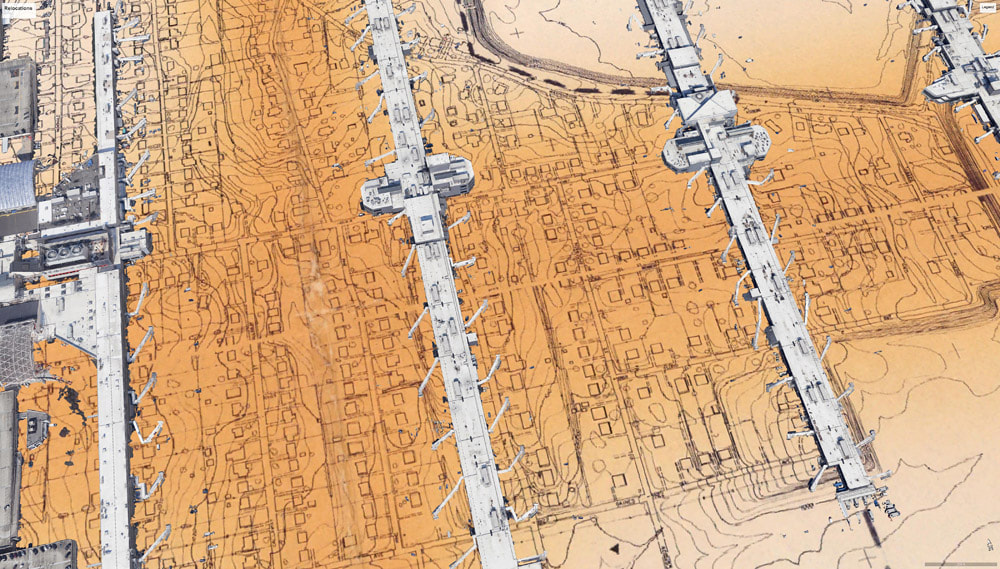 This is a rare view of the area circa 1967 with houses being prepped for relocation. This particular spot is now the center of concourse B where the escalators descend to the underground plane train and moving sidewalks. 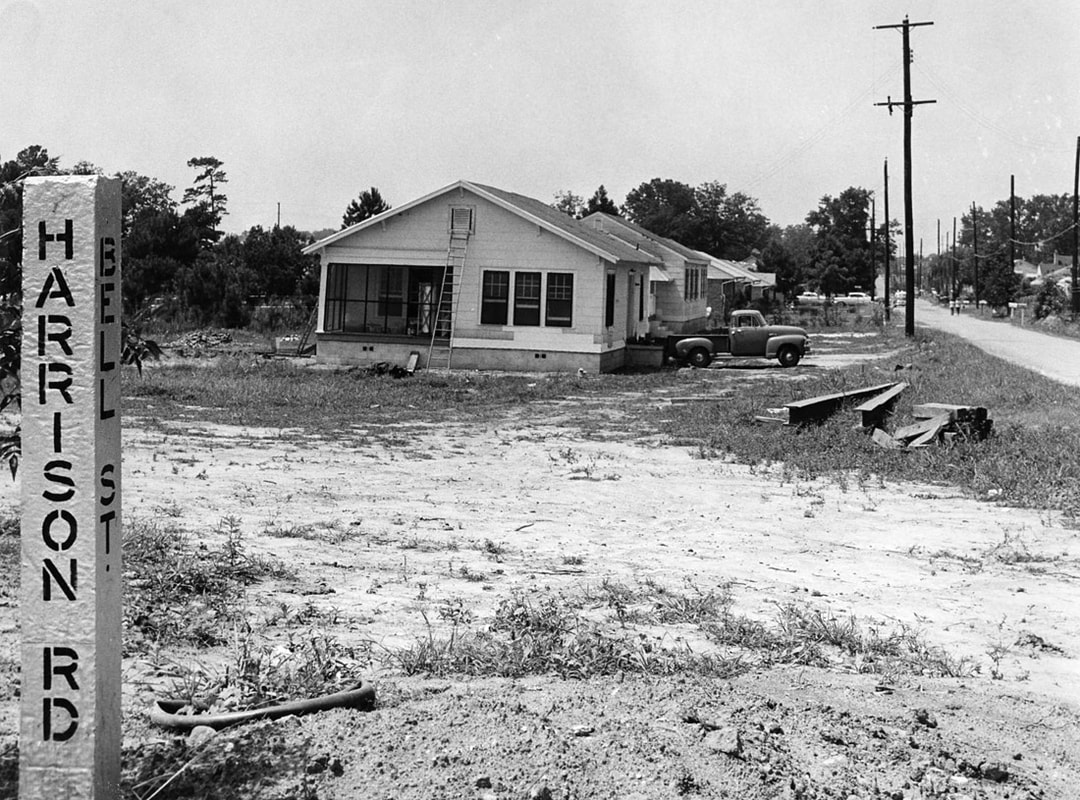 The city purchased the homes directly from residents and then auctioned them off for relocation and raw materials. This is a typical newspaper announcement from the late 1960s. 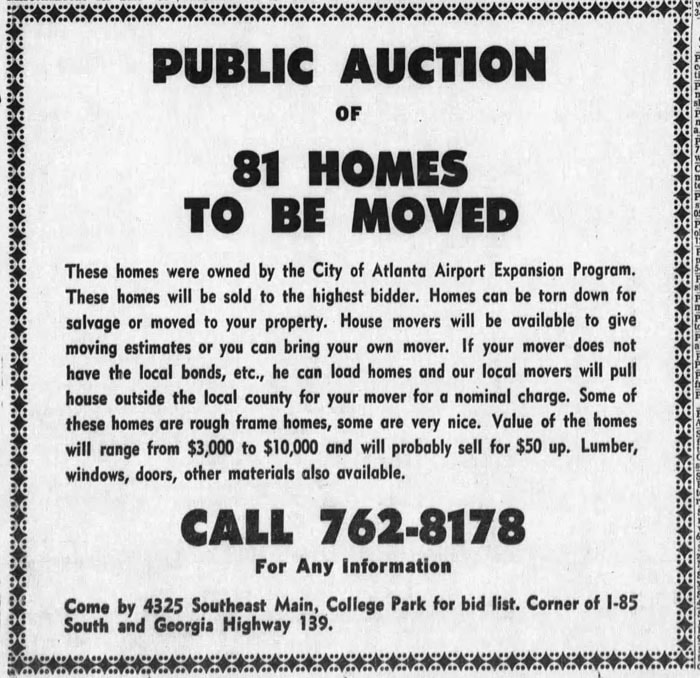 By 1968, almost all of the homes east of I-85 had been removed. Also, several blocks of homes and businesses were bulldozed in the area at the top of the photo as part of the FAA mandated clear zone at the end of runway 9L. 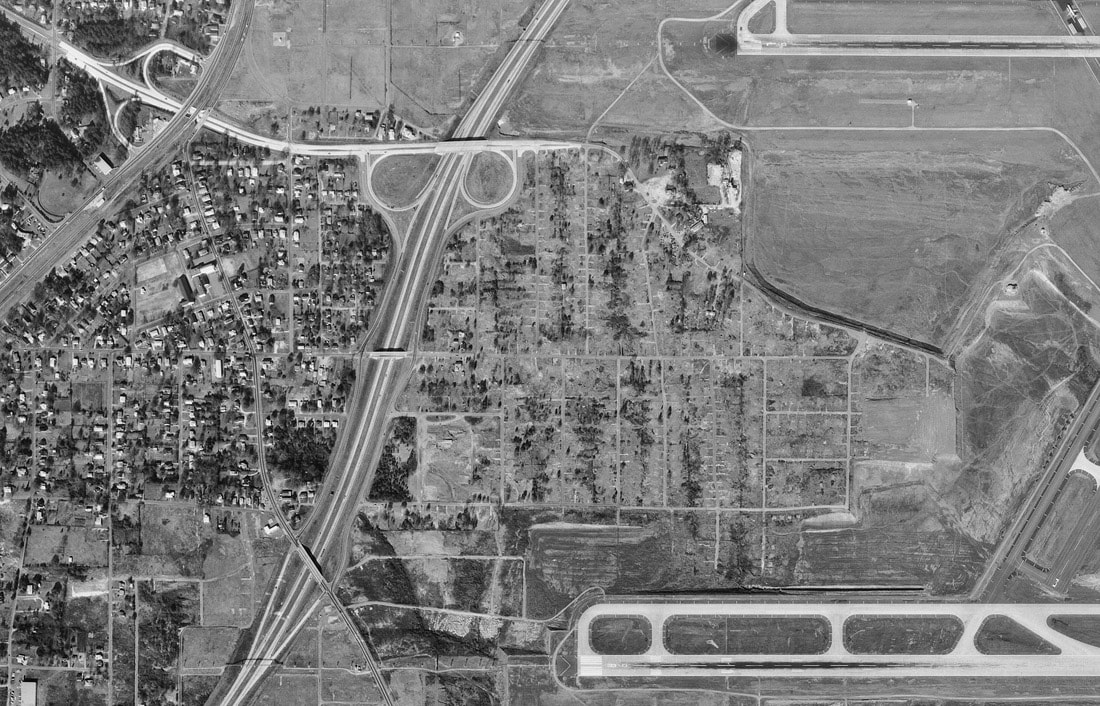 The February 2, 1969 Atlanta Journal Constitution featured this map showing this updated design that ultimately carried the airport forward into the 21st century: the midfield terminal at the center of the field, crosswind runways removed in favor of 4 parallel runways, a control tower at the center of the airport and the Delta maintenance base expanded to the east. The most controversial aspect of this revision was the rerouting of I-85 further west which required the destruction of yet another large swath of the city of College Park. 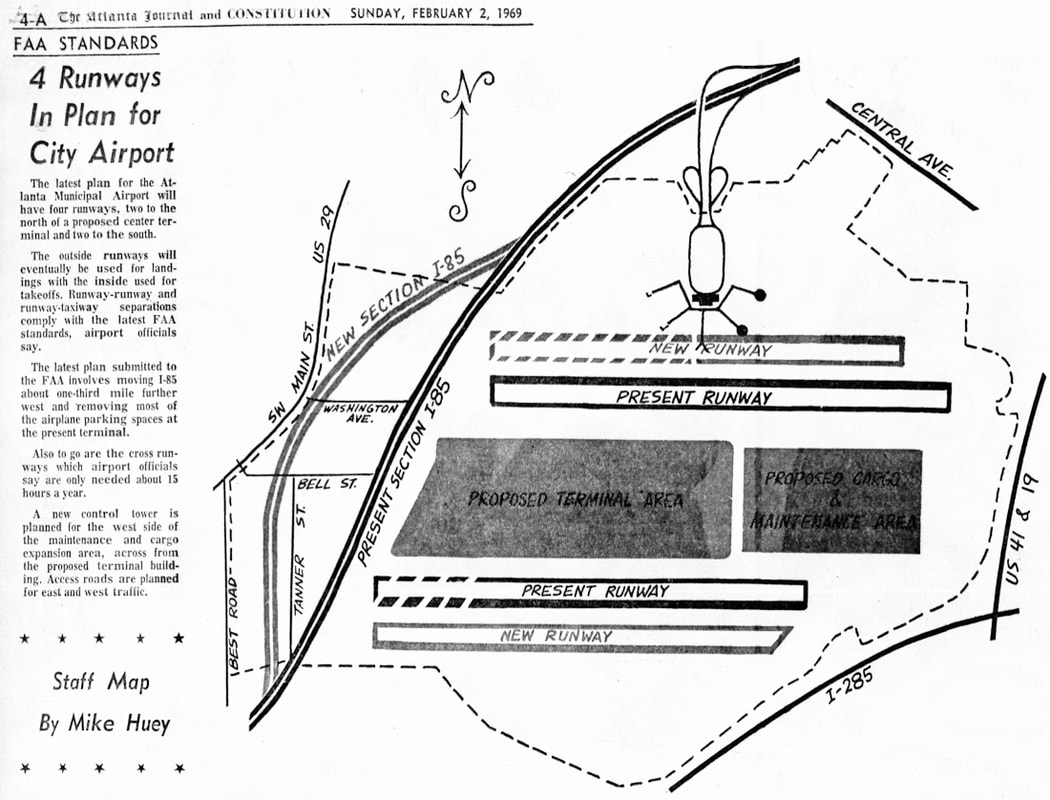 Here's another airport map featured in the paper, illustrating the reason for moving the expressway.

The following series of maps are taken from the Hartsfield Atlanta International Airport Layout Plan Report published in 1973 which laid out a detailed, incremental expansion to take place between 1974 and 1980. Very few of these plans actually came to fruition but it's fascinating to see what might have been.

The first map portrays Stage 1 of the development plan, envisioned to take place during 1974-75. In this scenario, an airport shuttle system would carry passengers from a station to be constructed near concourse A of the 1961 terminal to new satellite terminals at the center of the airport. The dark vertical line on the east side of the airport was a proposed Flint River "improvement", which meant piping and burying it below the airport. 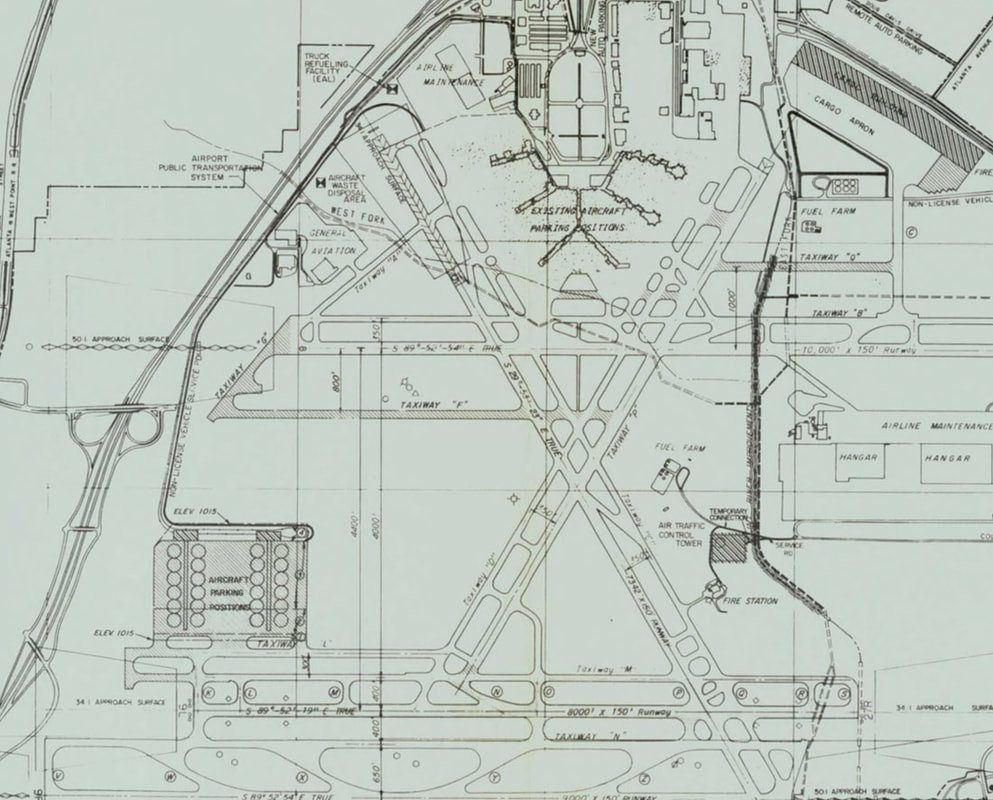 A close up of the 1961 terminal during the proposed Stage 1 plan shows the proposed automated transportation system station near concourse A, a (never built) addition to the end of concourse D and various gate expansions which, for the most part, were constructed. 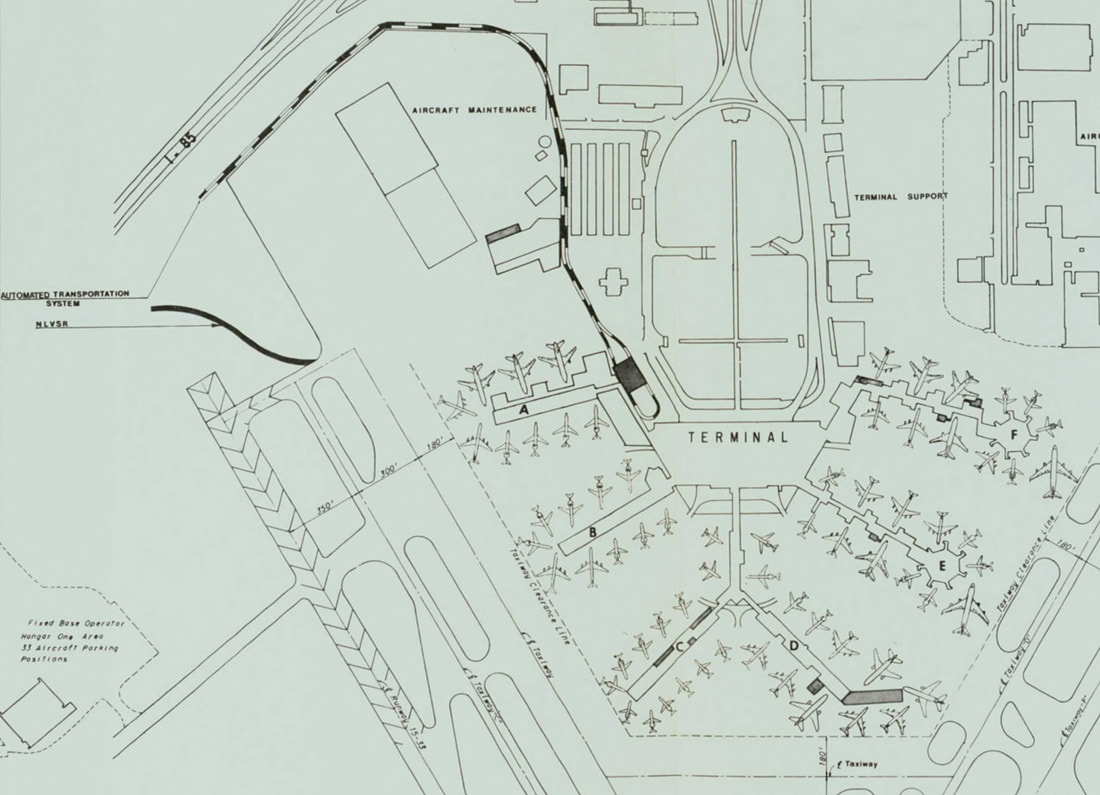 Stage II was to take place during 1976 and 1977 and involved the relocation of I-85, a new terminal that ran parallel to the expressway and additional satellite gates at separate mini-terminals at the center of the field. The mini-terminals were to be connected only by roadways and an elevated airport transit system, making connections at the world's largest connecting hub extremely inefficient. Also, the central roadway and transit system would separate the north and south aircraft ramps, requiring long taxis to the runway for some planes. 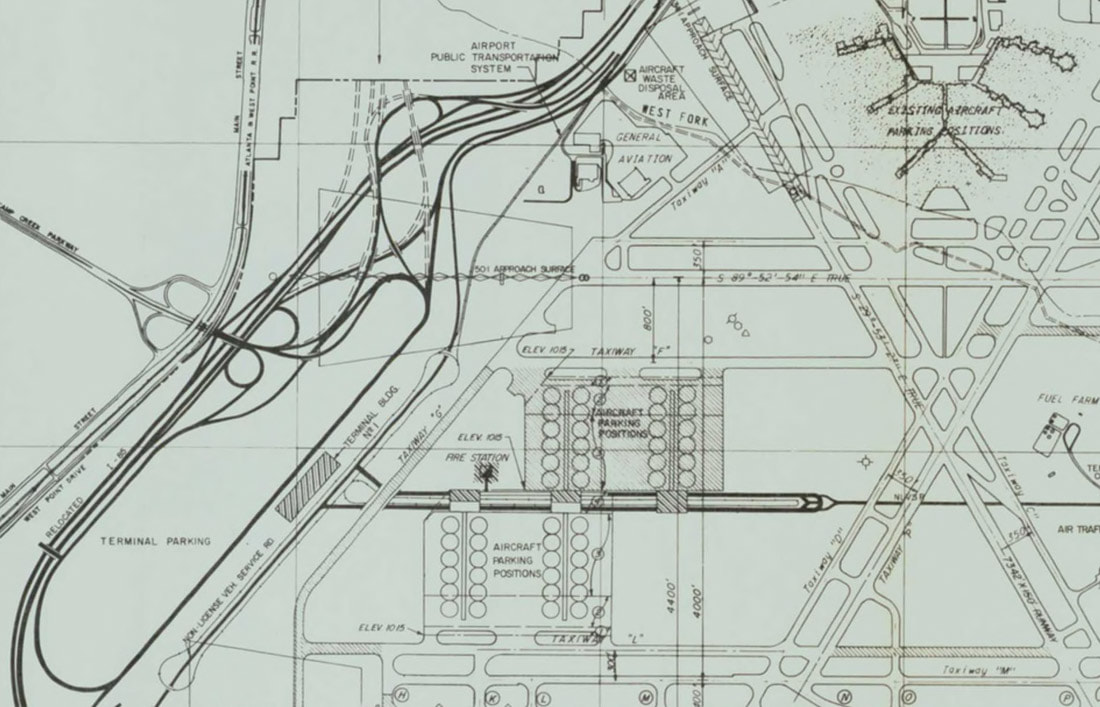 Stage III of the proposed plan was to be implemented from 1978 to 1980 and included additional terminal buildings along the expressway and additional gates and mini-terminals at the central complex. Concourses C and D at the old terminal are truncated in anticipation of the 4th parallel runway. Again, this plan was only proposed and never enacted. 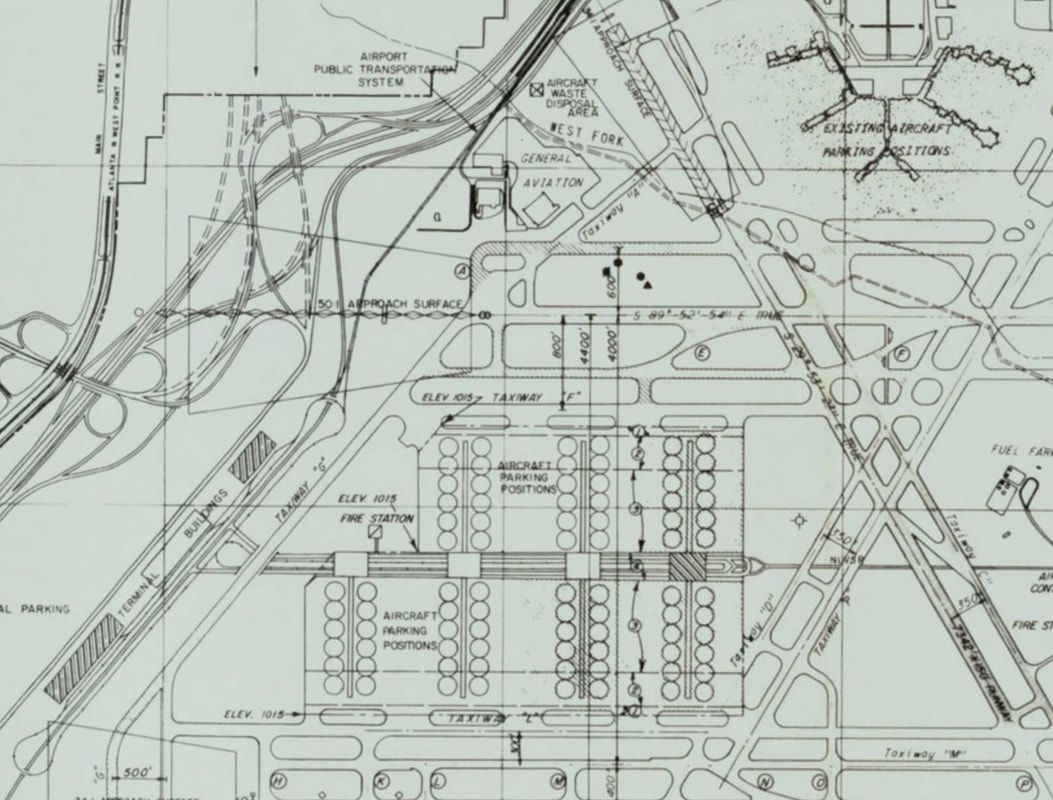 Stage IV shows the airport as envisioned beyond 1980: the complete removal of the crosswind runways, an additional 48 gates at the central complex, additional cargo facilities on the southeast corner of the airport, a 4th parallel runway on the north side of the field, continued use of the 1961 terminal with the removal of concourses C and D, a new Loop Road across the north end of the airport and rerouting of the west fork of the Flint River parallel to the north runway. In hindsight, this configuration looks hugely inefficient and was thankfully redesigned and fine-tuned before construction began. On the other hand, it would be nice to have portions of the 1961 terminal still standing today. 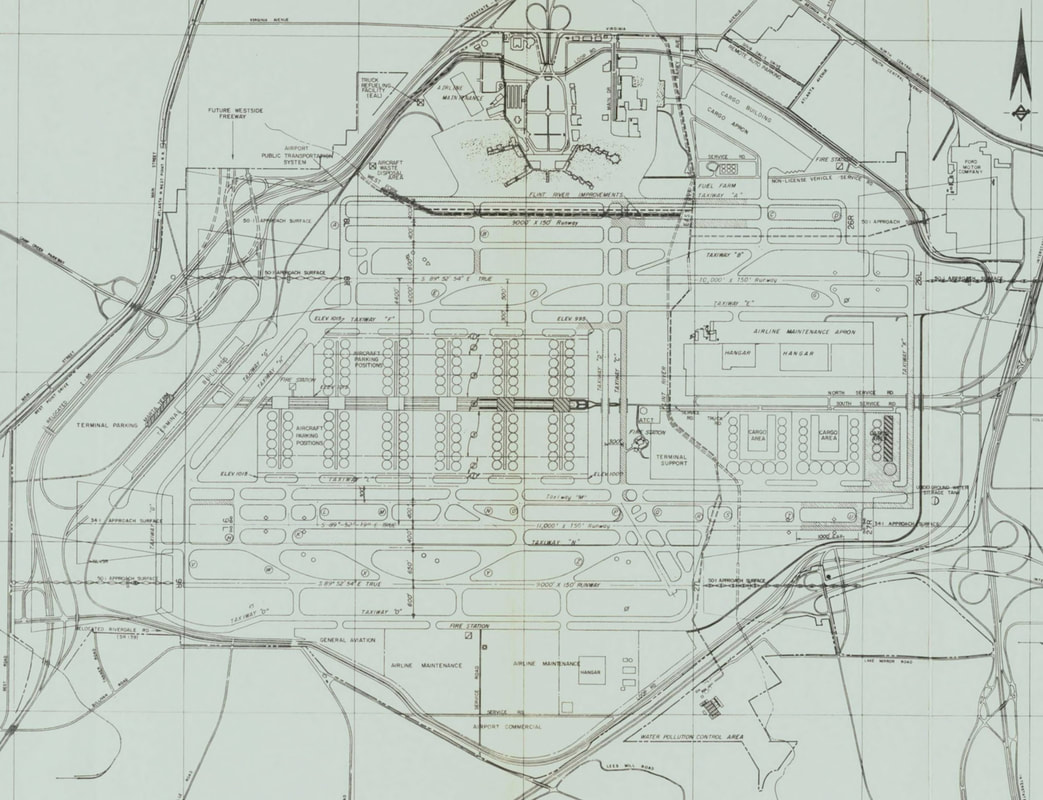 Here's a detail of the 1961 terminal as shown in the Stage IV proposal. The station for the automated transit system that would shuttle passengers between the various terminals can be seen at concourse A. In this view, concourses C and D and the concourse E rotunda have been removed to allow clearance for the fourth runway. None of these plans ever made it past the drawing board. 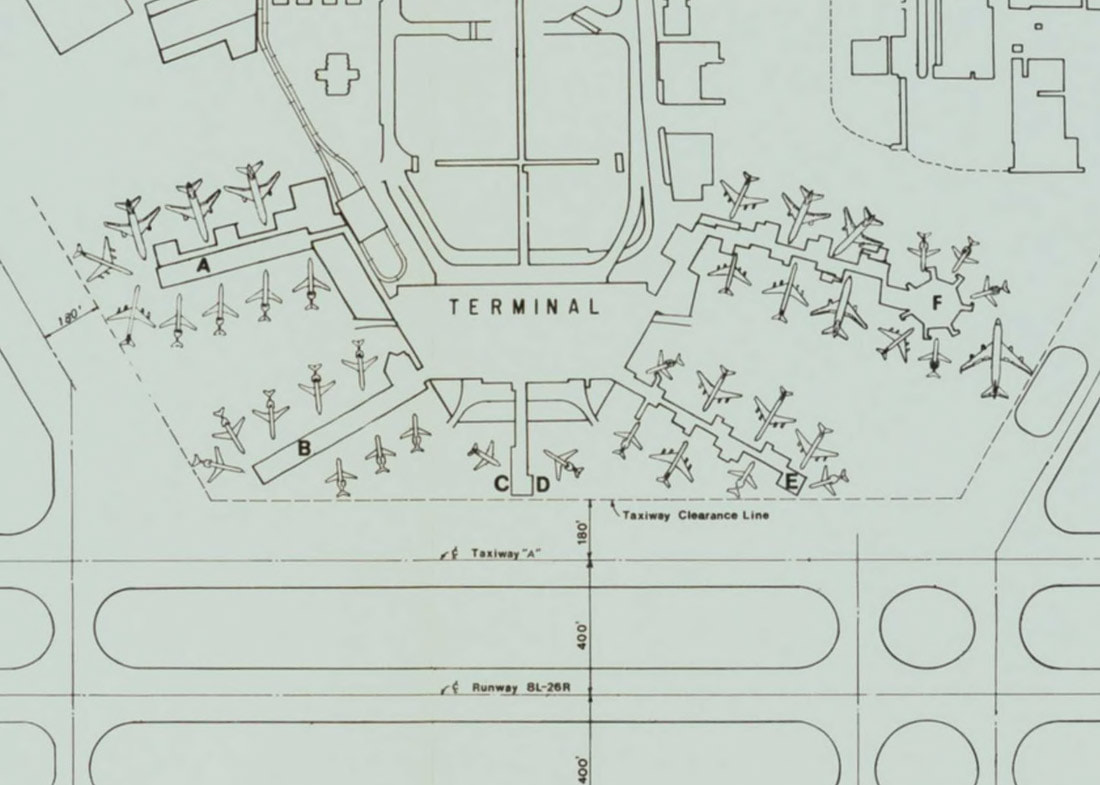 By 1977 the design was finalized: two back-to-back landside terminals on the west side of the complex with 4 parallel airside concourses connected by an underground transit mall featuring an automated rail system and moving sidewalks. The underground mall could be extended to the east and additional concourses could be added as traffic increased in the future. This modular design has allowed ATL to expand seamlessly and remain the largest connecting hub in the world for 4 decades.

This map of the anticipated gate positions at the midfield terminal is from the Atlanta Airport Task Force Delay Study prepared in 1978 and shows the terminal as it was actually built. Airlines were assigned gate locations based on the number of passengers they were anticipated to board in coming years. The more passengers an airline was predicted to carry, the closer their gates were to the main terminal. Delta, the largest airline at ATL received gates at concourses A and nearly half of B, Eastern would occupy roughly half of B and two thirds of C, United (which pulled out of Atlanta before the terminal opened) was to occupy about a third of concourse C, and the other airlines, Southern, Piedmont, Northwest and Braniff would take concourse D. This is very close to the final gate positions when the terminal opened in 1980. 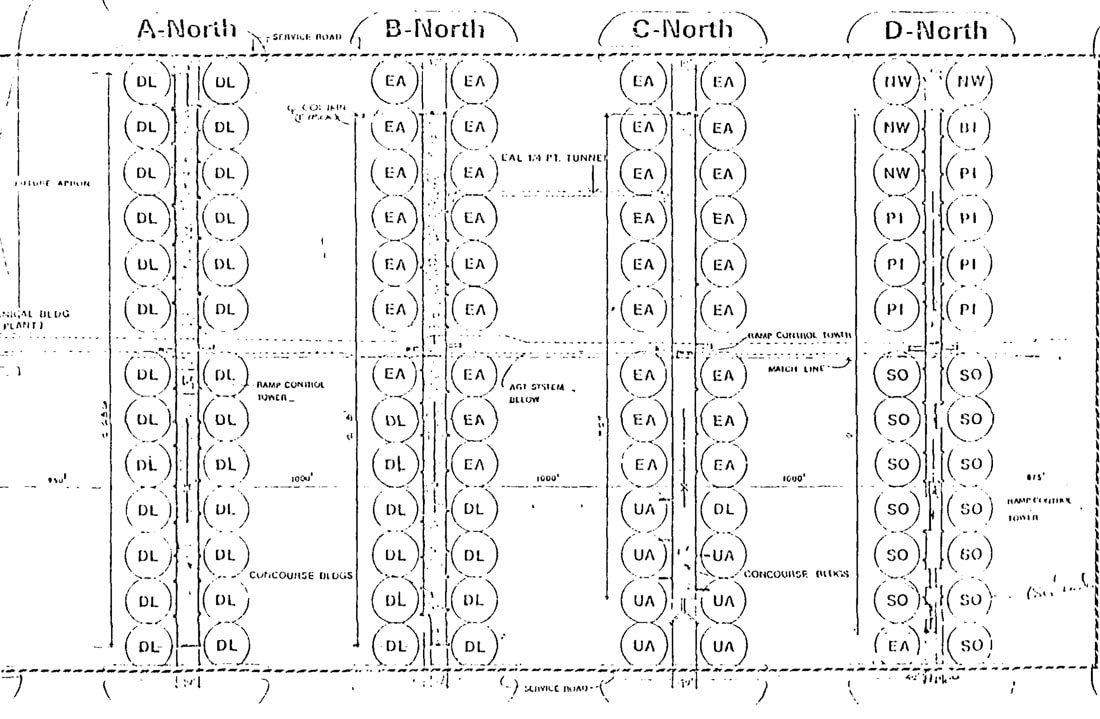 The final midfield terminal design as it was built is shown in this rendering. The connected north and south terminals are in the foreground with the MARTA rapid transit station at bottom center. The MARTA station was part of the original 1980 structure even though the rail line didn't reach the airport until June 18, 1988. The international concourse T (T for terminal) is connected to the north terminal and is seen to the left. Concourses A through D can be seen beyond the main terminal. This image is part of the Eastern Airlines Digital Collection. 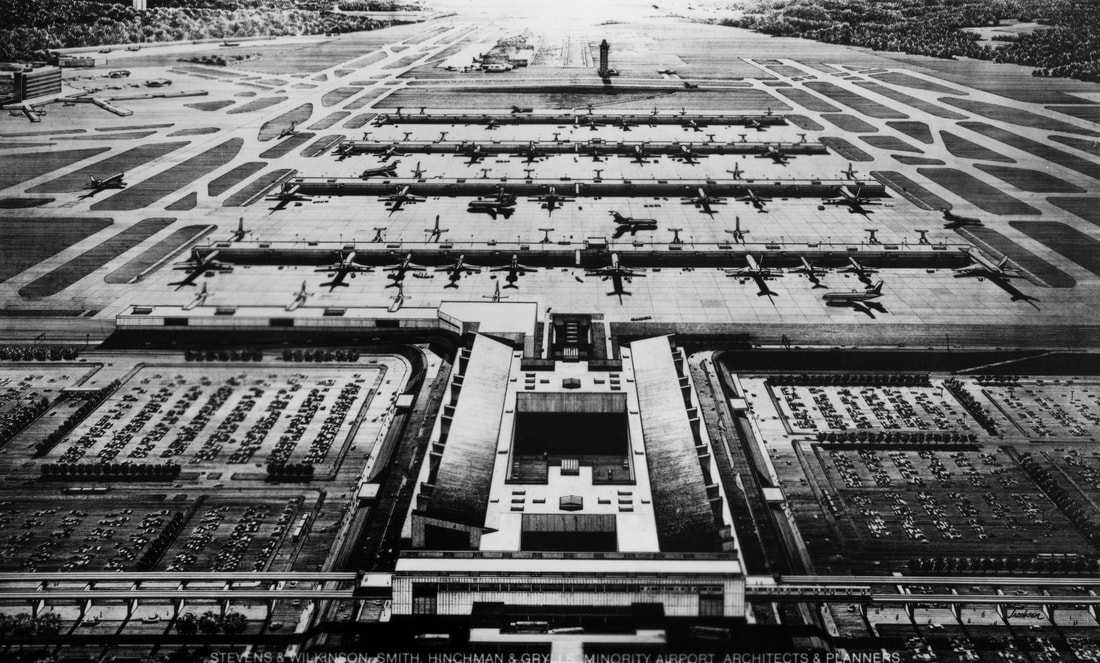 NEXT : ATLANTA'S MIDFIELD TERMINAL UNDER CONSTRUCTION