HISTORY OF AIRLINE SERVICE AT SARASOTA 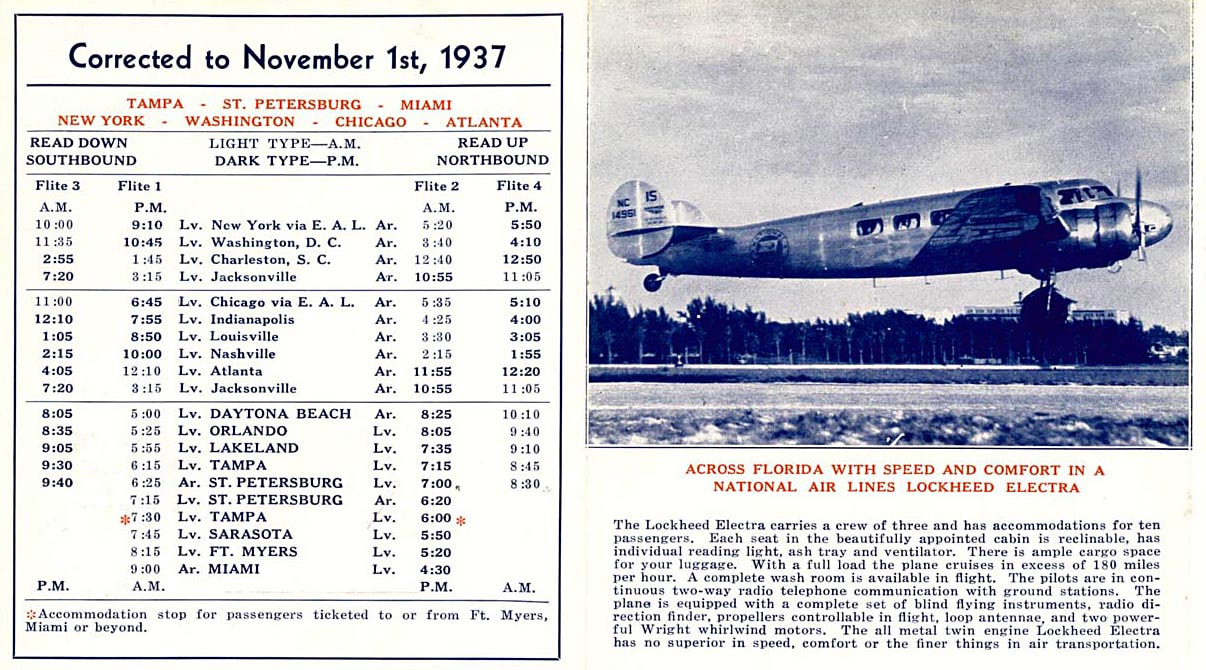 The same timetable features descriptions of several Florida destinations including this one about Sarasota.

This photo from the Florida Archives shows travel agent Fred Francke (right, wearing hat) and another man with a Piper Cub used for flight instruction. Behind them is National Airlines' terminal at Lowe Field which was located along what is now North Beneva Road, between 12th Street and Fruitville Road. Just beyond the trees in this photo is the winter headquarters of the Ringling Brothers Circus. A quick look at Google maps reveals that the location of this scene is now a Publix parking lot. 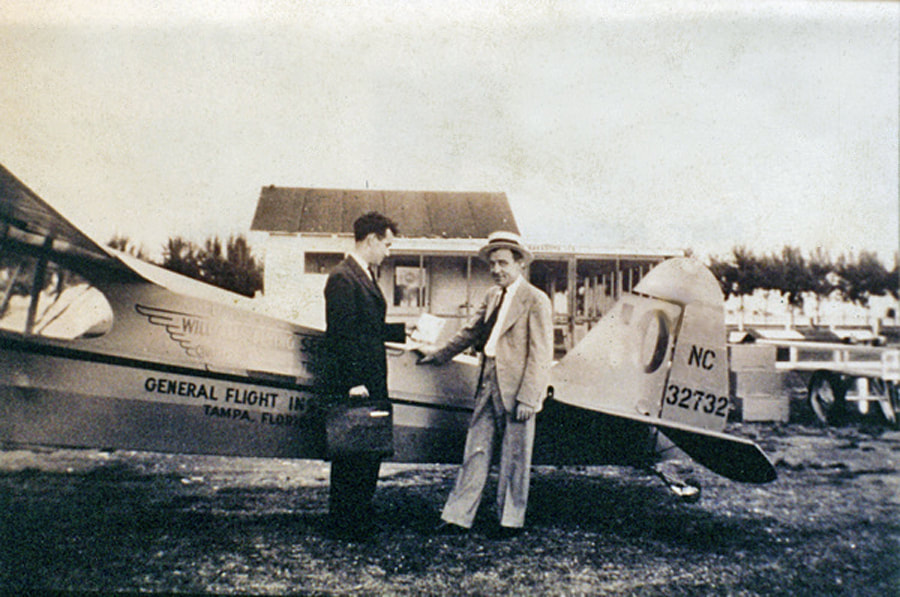 Sarasota's short unpaved runways left no margin for error and take offs and landings were potentially hazardous in hot or rainy conditions. As National began to replace the Lockheed L-10 Electras with larger Lockheed Lodestars, it became apparent that Lowe Field was not suitable for airline operations. This highlighted detail from National's December 1, 1941 schedule shows that service to Sarasota had been "temporarily suspended pending completion of airport improvements." Timetable image courtesy of Björn Larsson . 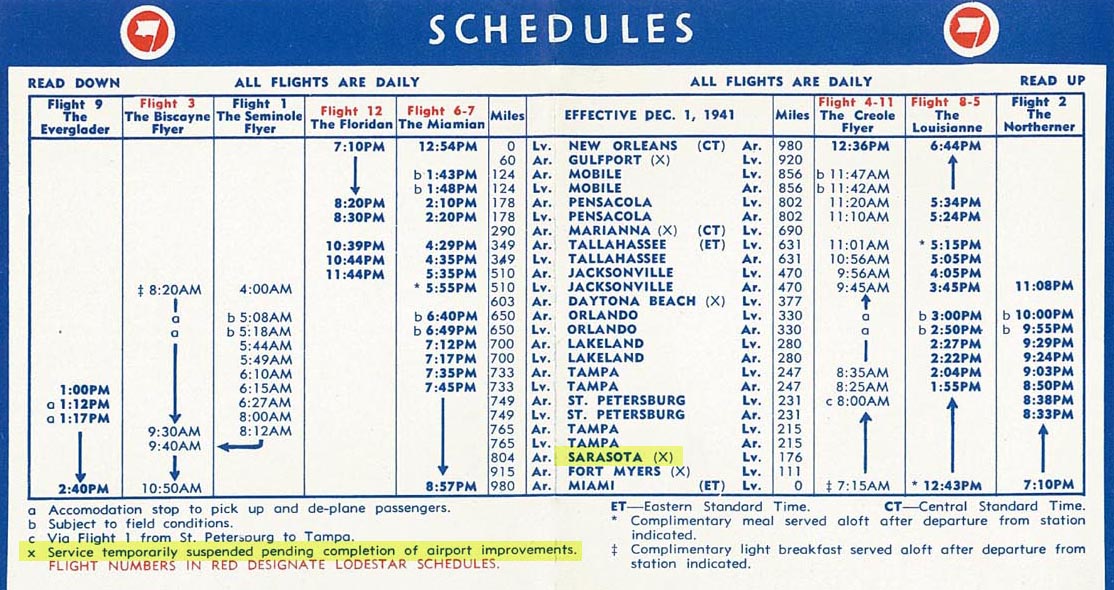 Unable to afford the construction costs of a new facility on its own, Sarasota County partnered with neighboring Manatee County to build a new airport on a 620 acre site along the county line adjacent to Sarasota Bay. This aerial photo shows the undeveloped airport site circa 1939. (Photo: State Archives of Florida) 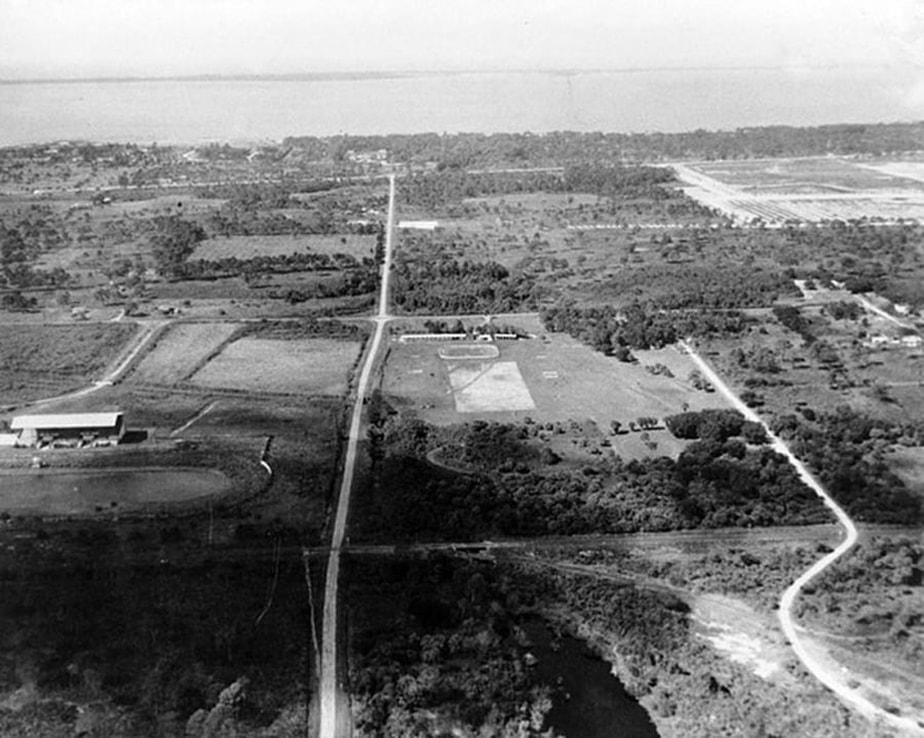 With the assistance of a Federal WPA-CCA grant, Sarasota Bradenton Airport was completed in 1942 at a cost of approximately $1 million. The airport was leased to the Army Air Corps as a training base during World War II and the federal government expanded the field and spent millions of dollars on improvements between 1942 and 1945. The entire base was turned back over to civilian use by 1947.

This view, facing west with Sarasota Bay at the top, shows the initial 4-runway layout of the airport. Barracks, hangars, and the passenger terminal were located along the v-shaped concrete apron on the south side of the airport, on the left side of the photo. (Photo: State Archives of Florida) 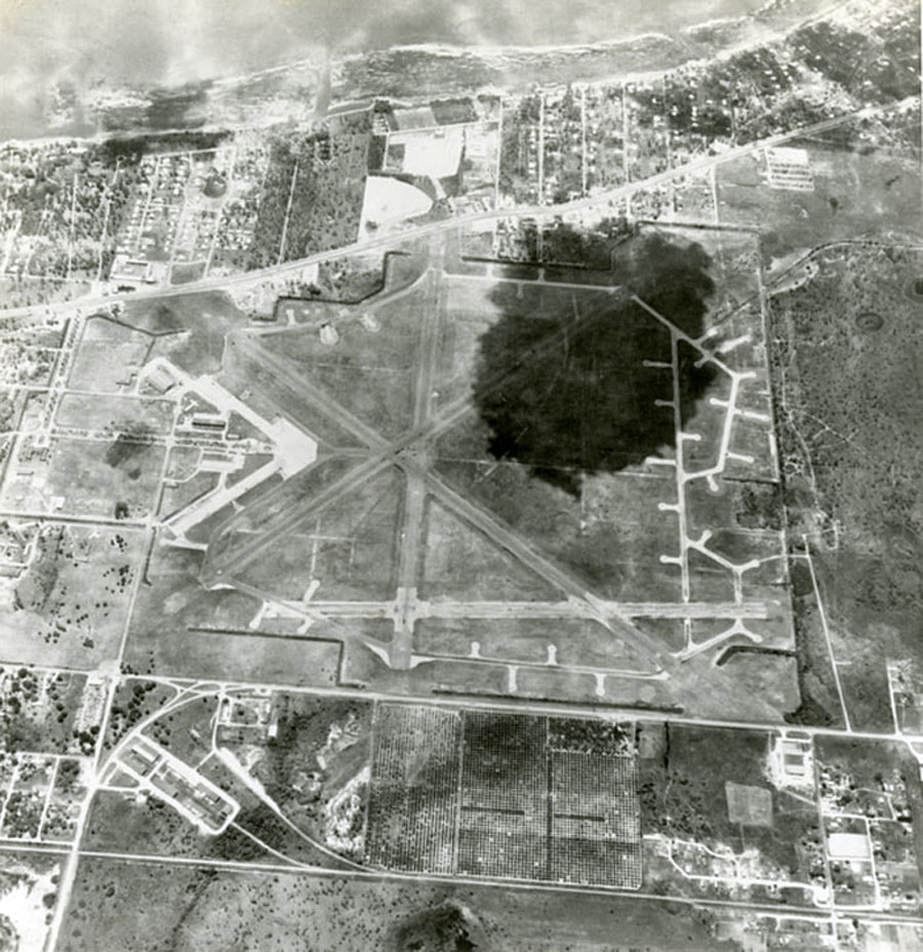 National Airlines returned to Sarasota Bradenton in 1944. This rustic wood terminal was used until 1959. (Photo: State Archives of Florida) 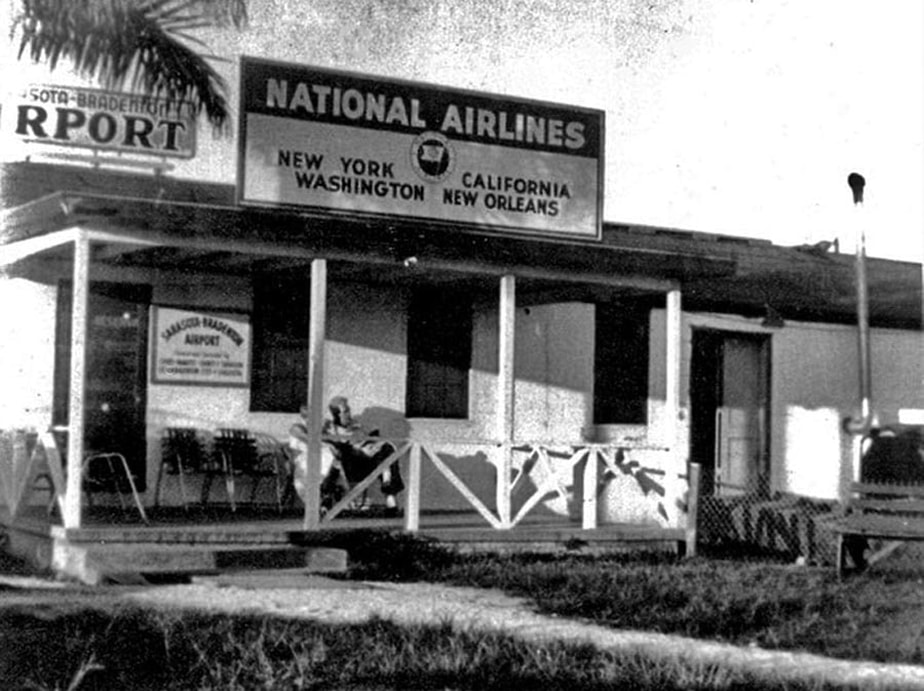 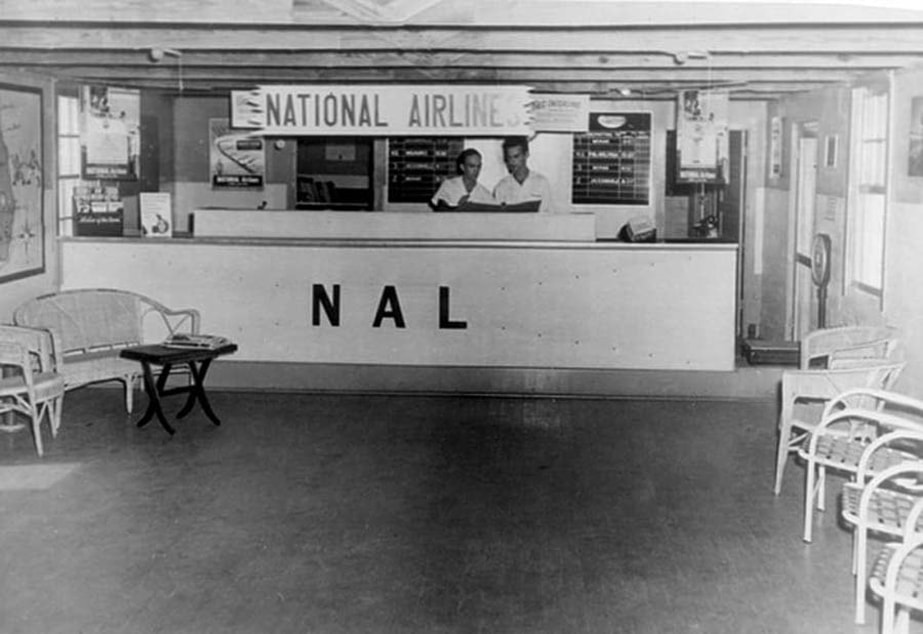 A National Airlines crew poses in front of a Lockheed L-18 Lodestar. National, the only major U.S. airline to never fly the Douglas DC-3, used the Lodestars through the late 1950s. (Photo: Sarasota History Alive) 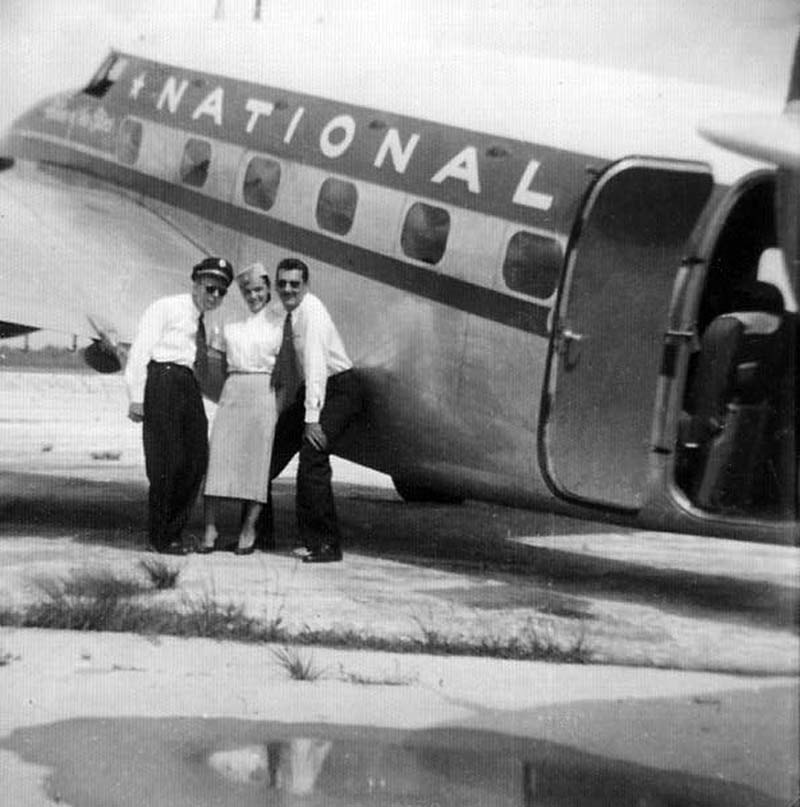 Construction of a modern new terminal that could handle jet aircraft began on August 18, 1958. The cinder block buildings seen here were the remains of the WWII Army air base. 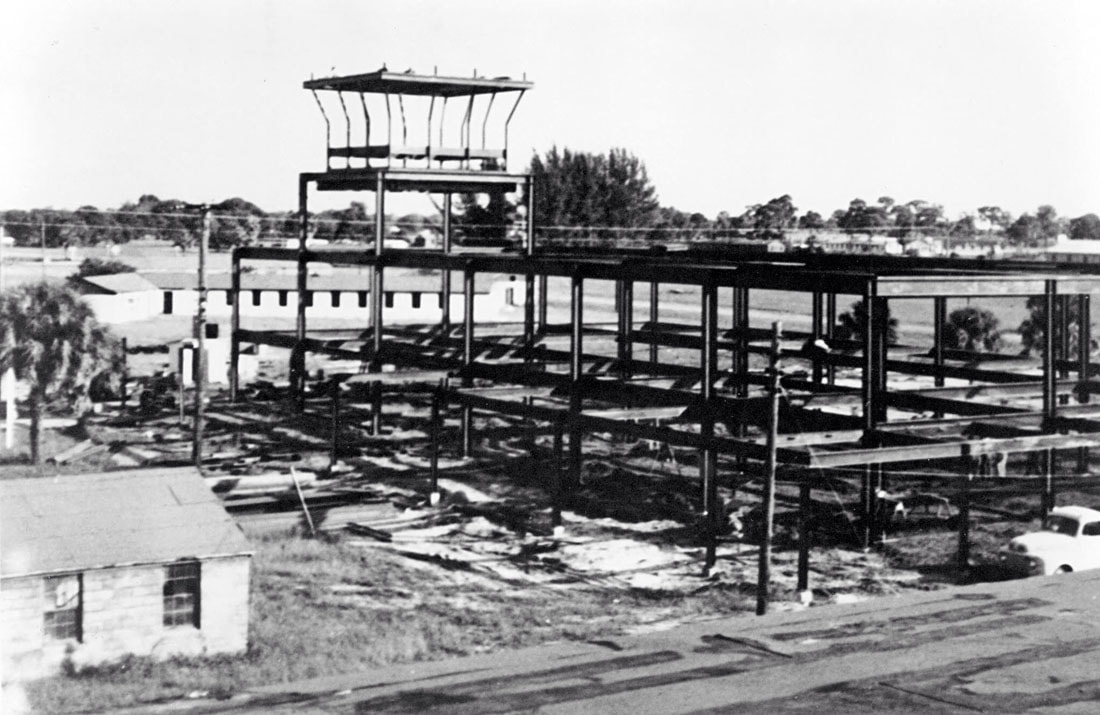 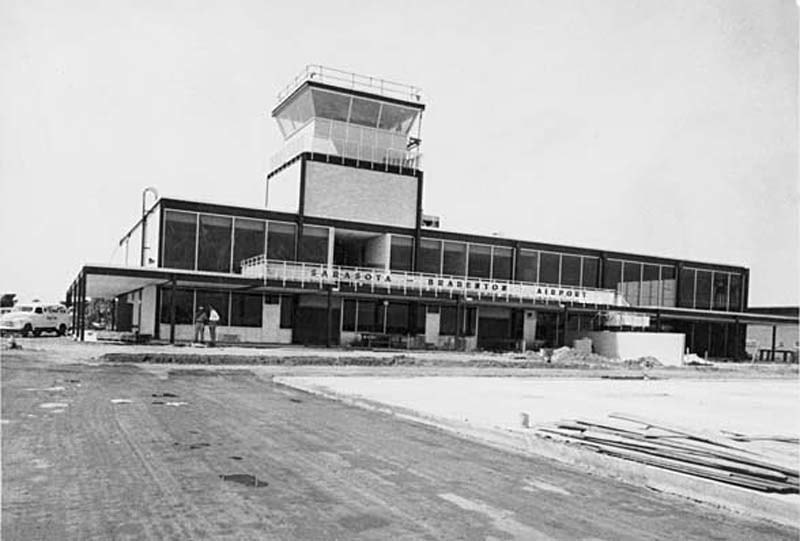 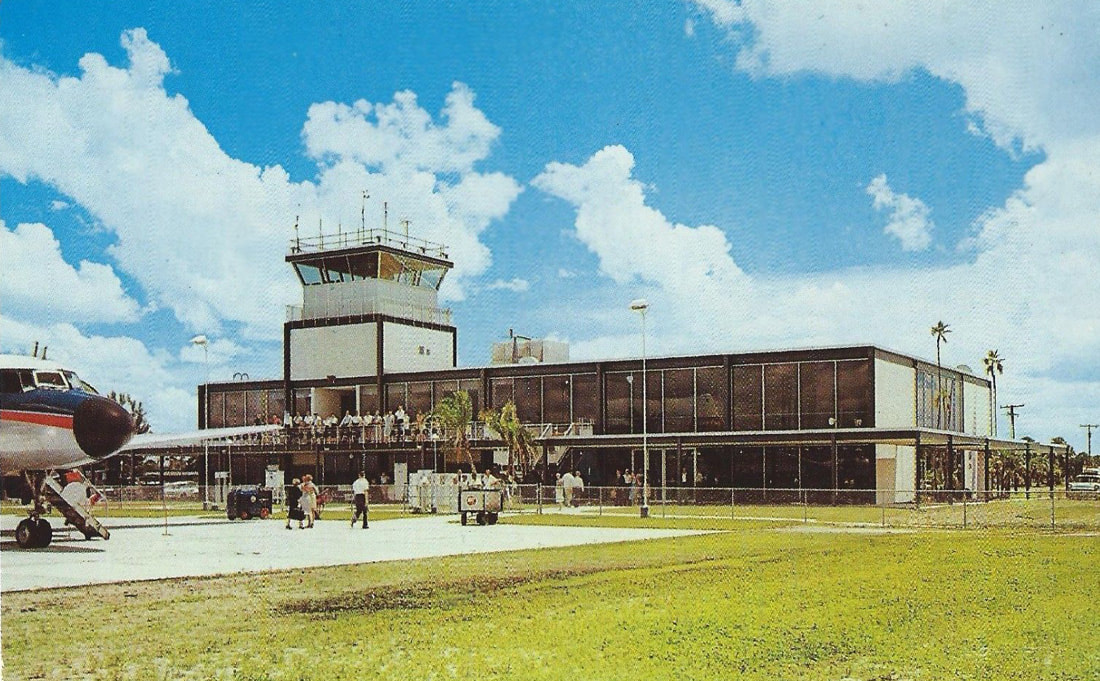 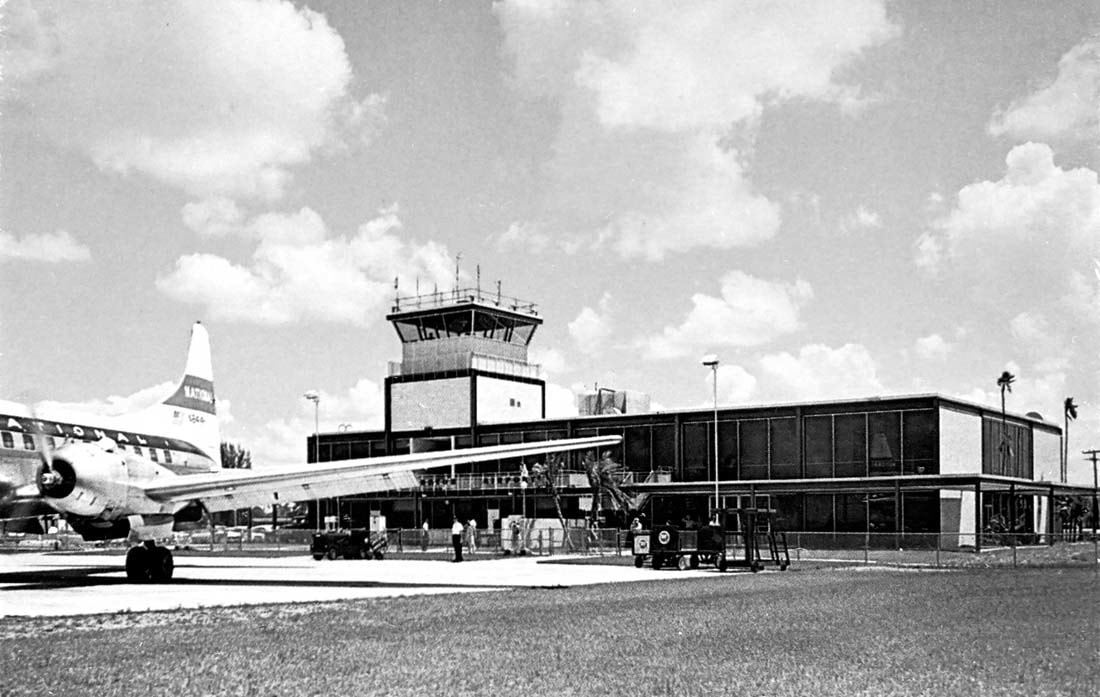 Eastern Air Lines began flying to Sarasota in January 1961. This early 1960s postcard view shows the final glory days of the "propliner" era with a National Airlines Lockheed L-188 Electra and Eastern Air Lines Lockheed Constellation at the terminal. This photo also shows how rapidly the airlines were outgrowing the new terminal with the aircraft barely able to squeeze onto the small ramp. Note the departing Electra's nose wheel is only feet from the grass. The ramp was expanded soon after. 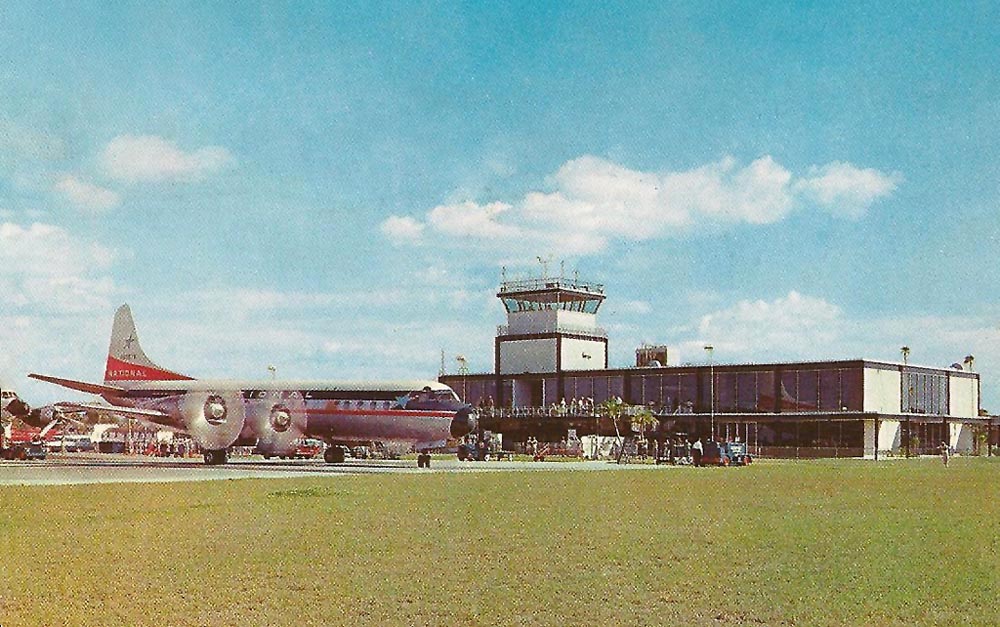 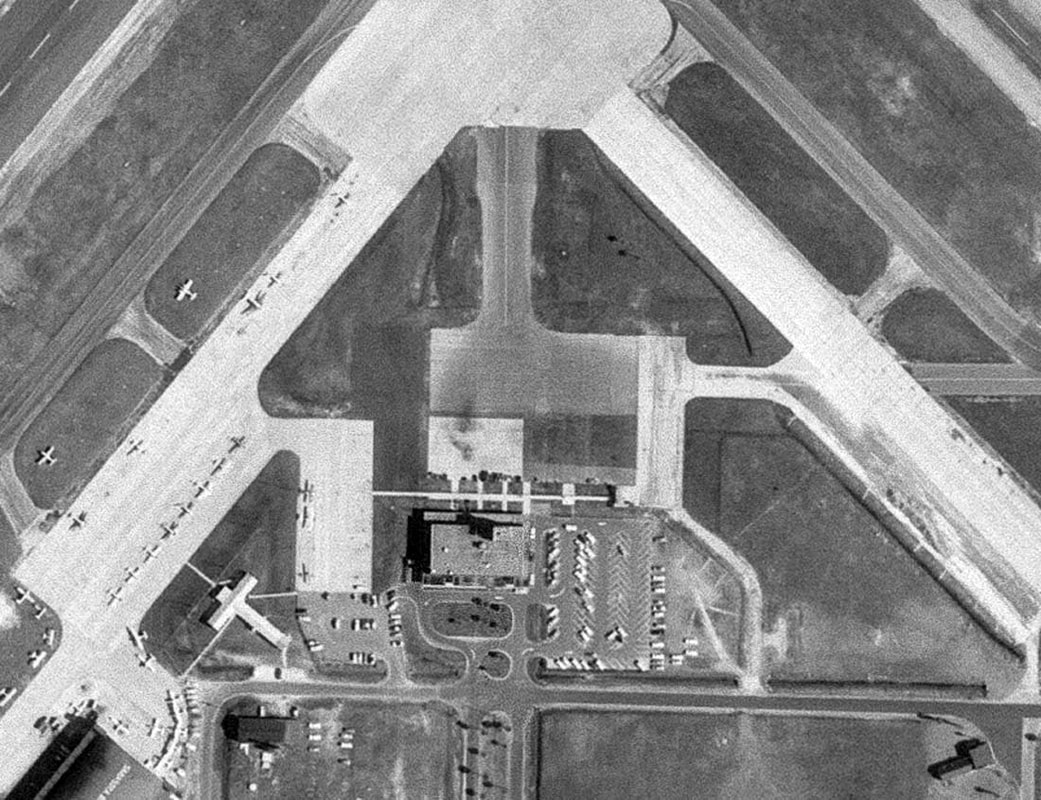 The Skyview Dining Room and Cove Cocktail Lounge, located on the second floor of the terminal, offered great views of the boarding ramp and runways. An Eastern Convair 440 can be seen through the dining room window in this early 1960s postcard view. 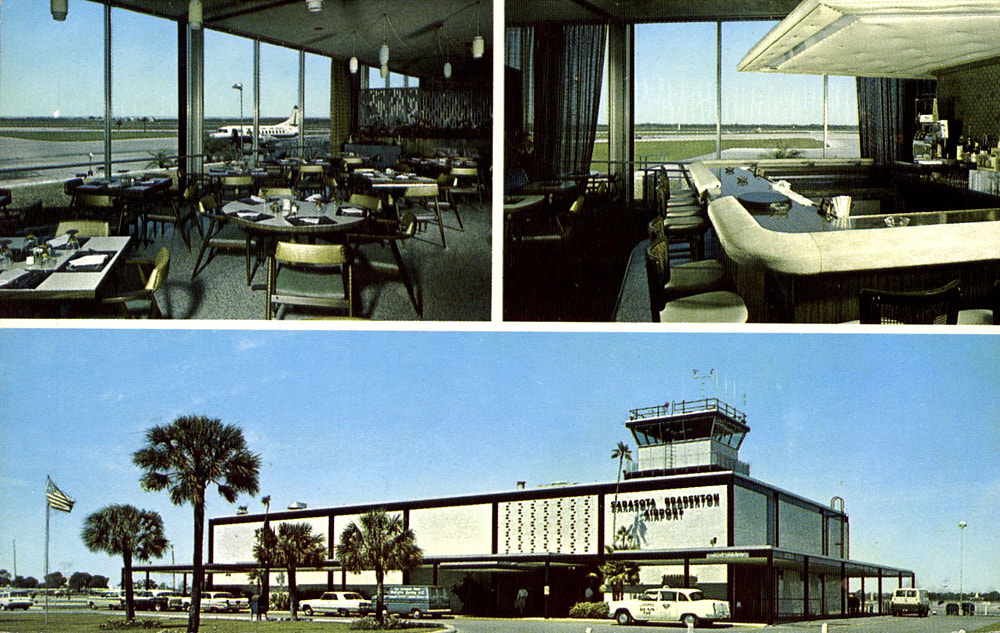 Another early-1960s postcard view, apparently taken from the exact same spot and on the same day as the above photo, judging from the cars. A National Lockheed Electra is visible just to the right of the terminal. Courtesy of Shea Oakley. 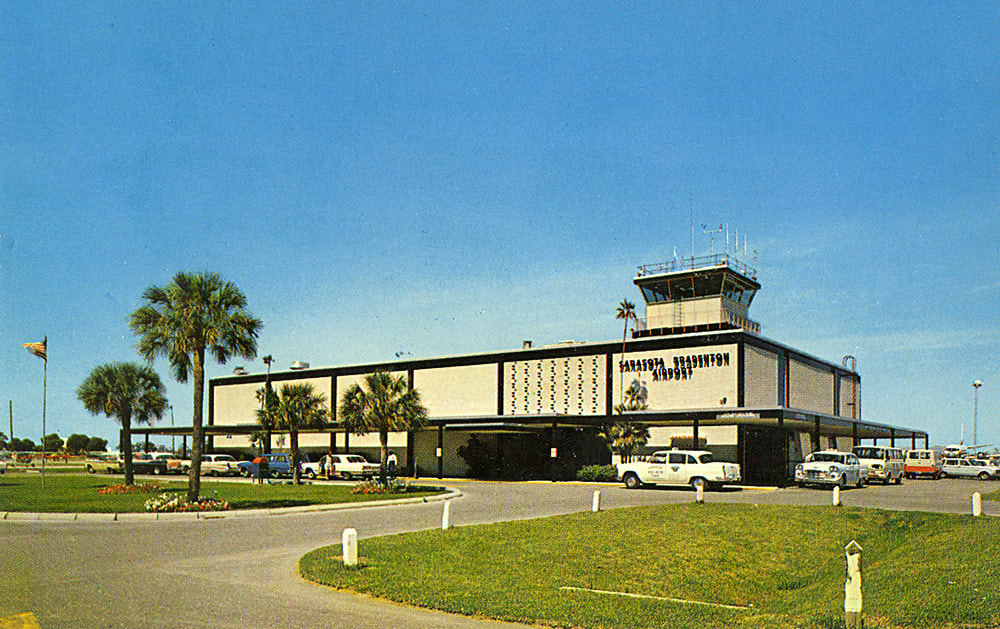 Ceremony marking the arrival of National Airlines' first jet flight to the Sarasota Bradenton Airport on February 15, 1965. The flight (Flight 61) from New York via Orlando had National Airlines president L.B. 'Bud' Maytag aboard. The Boeing 727 was met by local dignitaries including the reigning Miss Sarasota and Miss Manatee County, as well as several men dressed as Spanish conquistadors, complete with dark sunglasses. (Photo: State Archives of Florida) 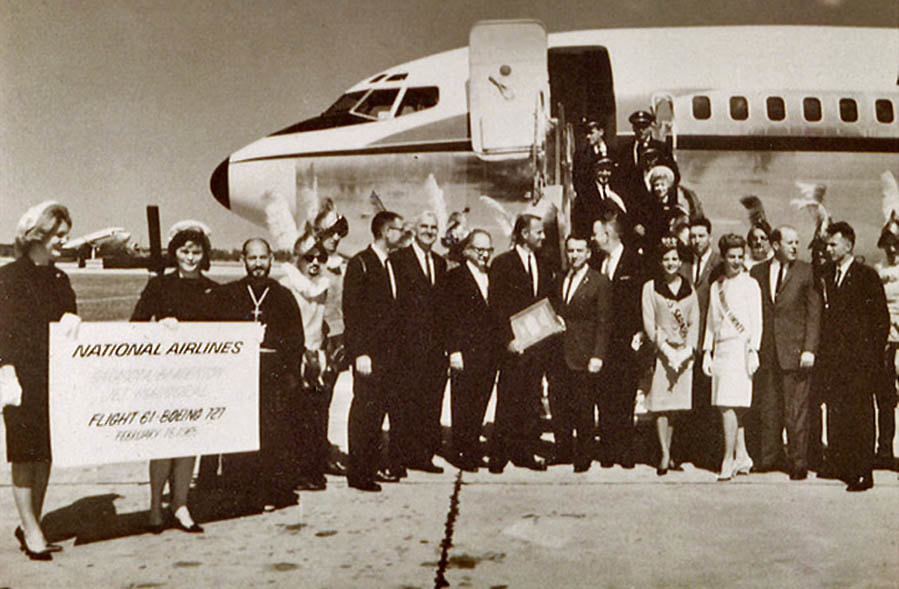 A circa 1967 postcard view of an Eastern Air Lines Boeing 727 "Whisperjet". 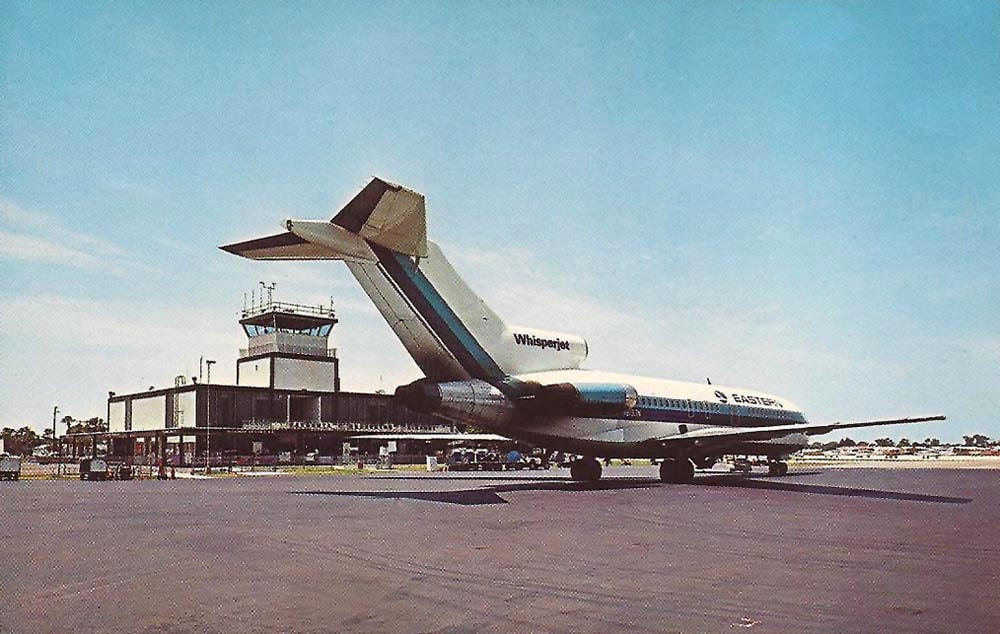 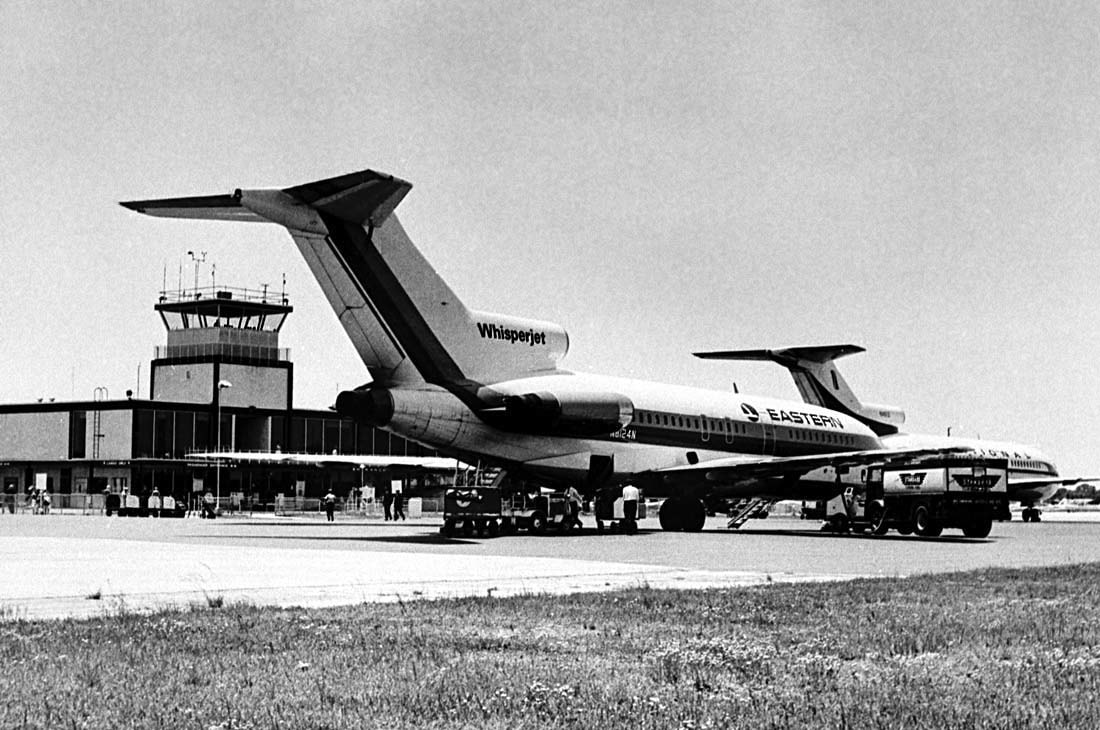 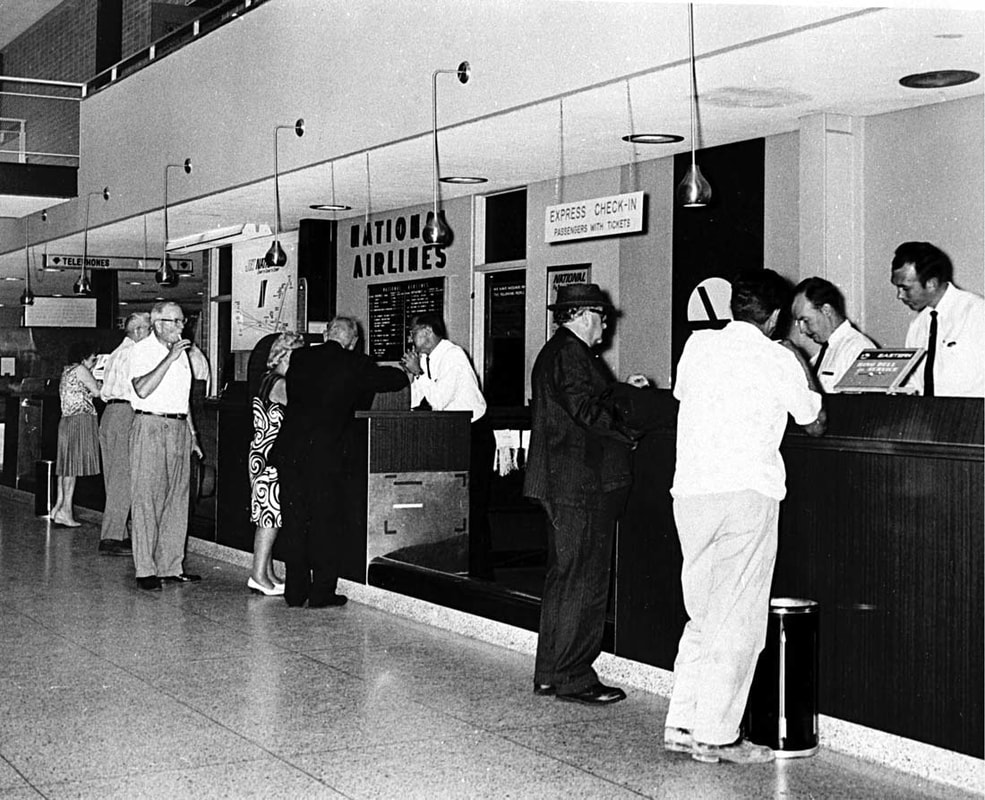 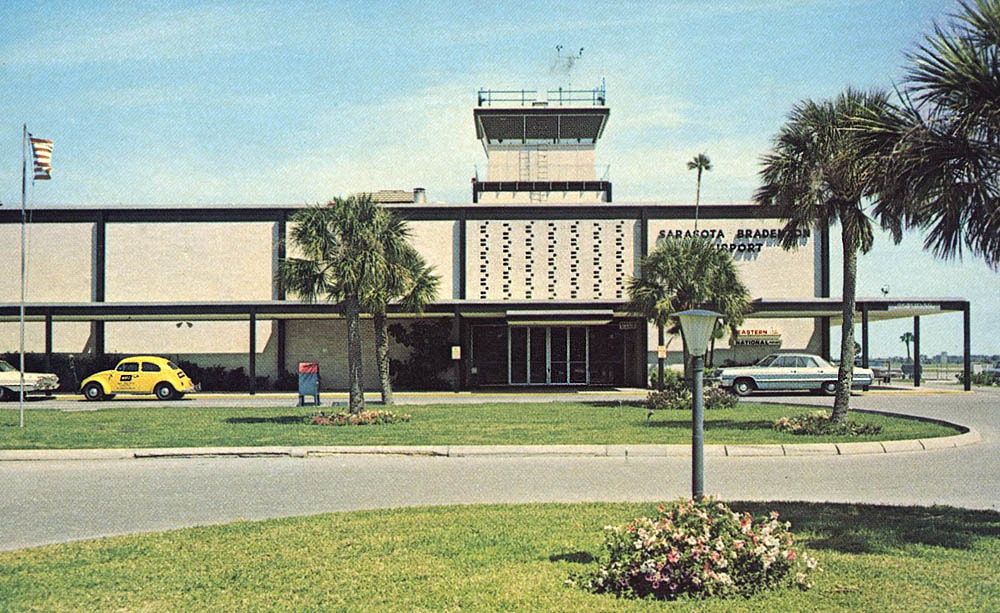 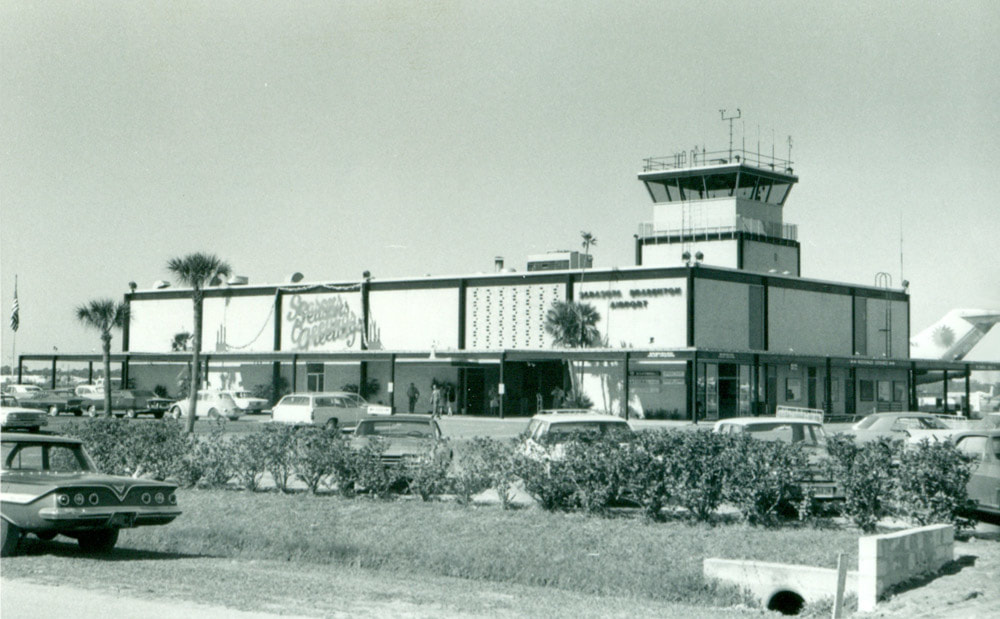 Along with major trunk airlines National and Eastern, two commuter airlines also served Sarasota Bradenton in the 1960s. New England commuter carrier Executive Airlines opened a southern division on December 1, 1964 and established its regional offices and maintenance base at Sarasota Bradenton. This December 1, 1968 timetable shows an average of 19 daily departures from Sarasota with non-stops to Tampa and Fort Myers and direct flights across Florida. 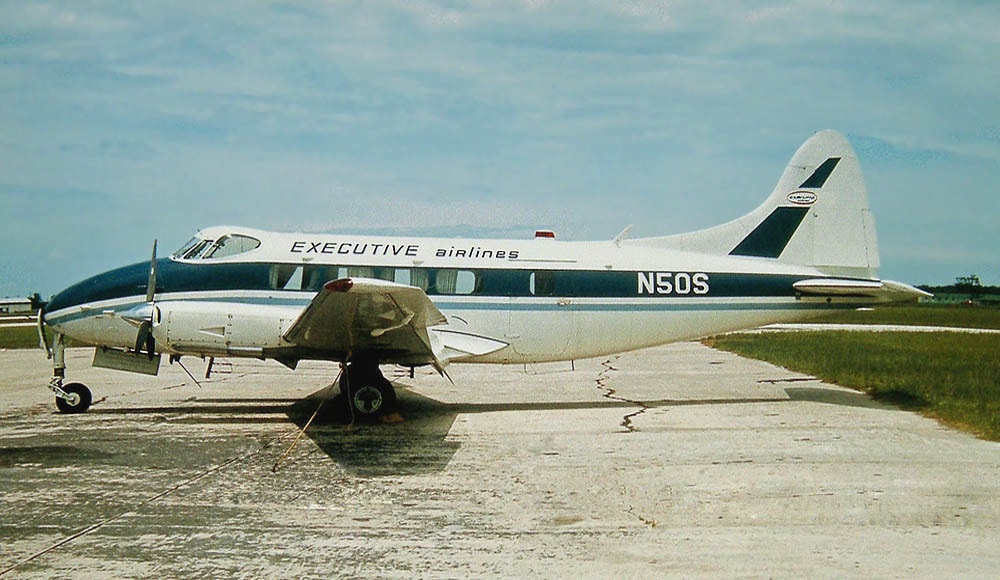 This aerial photo from January 13, 1969 shows a taxiway added to the west side of the ramp, allowing jets to taxi straight out from their parking positions. 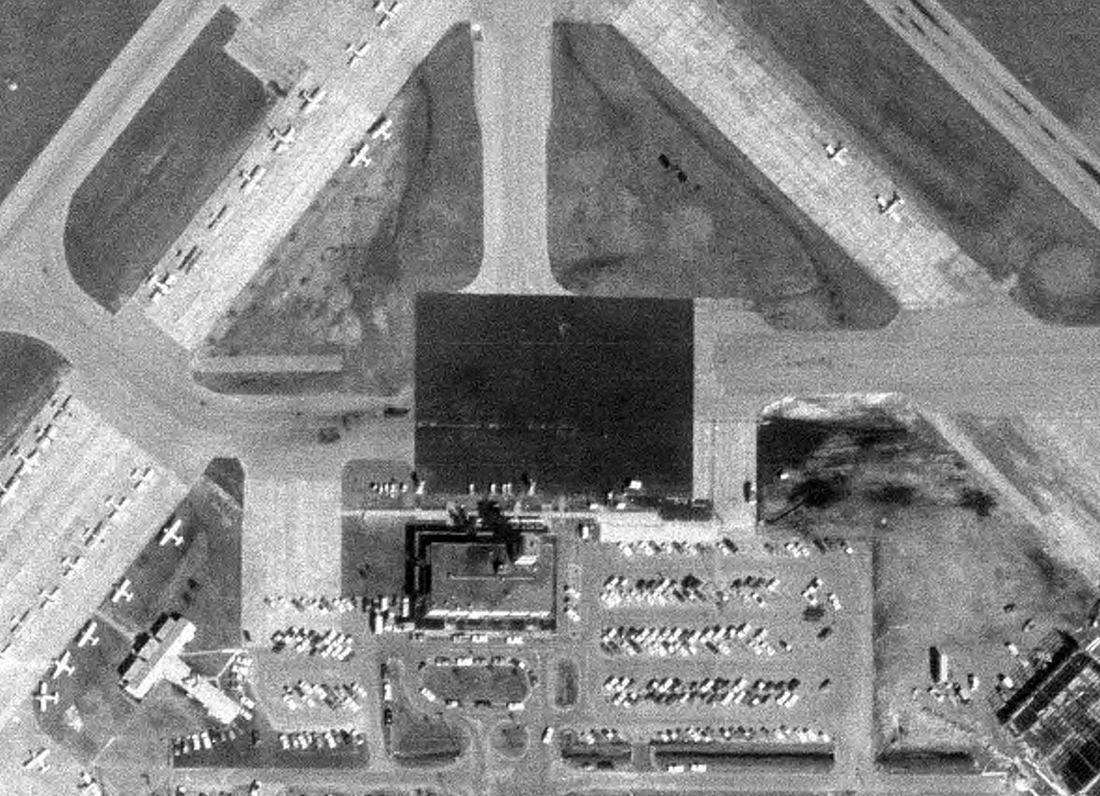 An overview of the terminal area circa 1968 shows two National aircraft on the ramp. Photo from the Sarasota-Manatee Airport Authority archives via Shea Oakley. 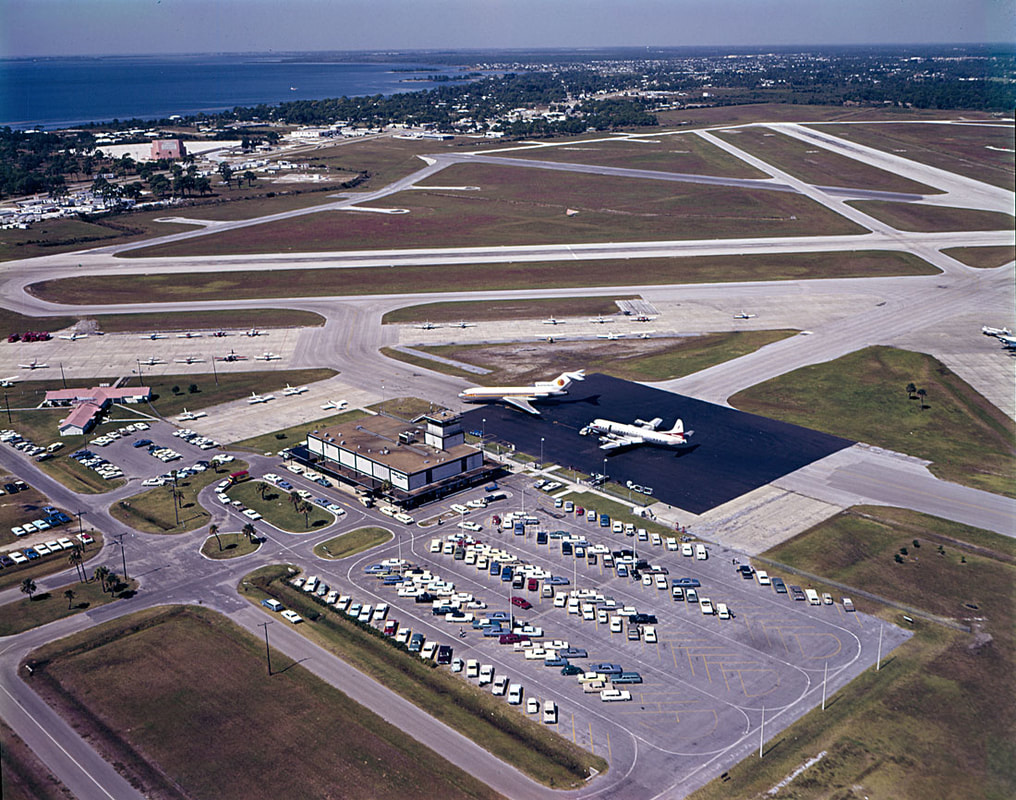 Here's a closer view of the above photo showing a National 727-100 in the new "Sun King" paint scheme and a Lockheed L-188 Electra turboprop at the terminal. National became one of the first "all jet airlines" when the Electras were retired in 1968. This really illustrates the small size of the old terminal. 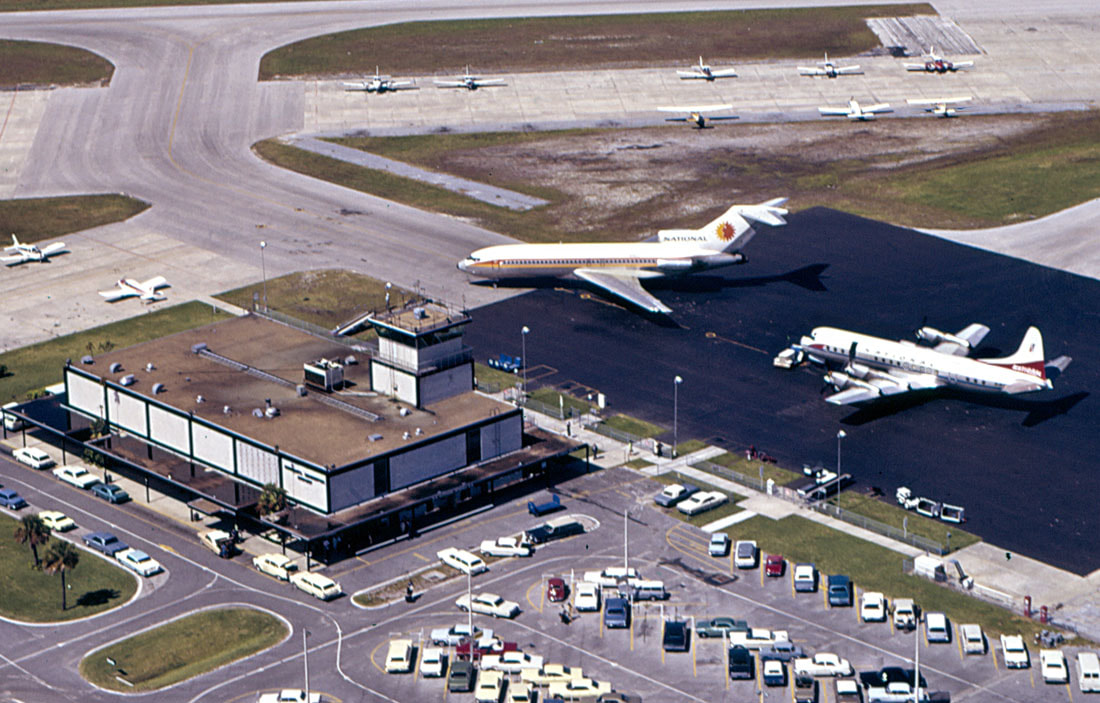 Eastern and National 727-100s at the terminal circa 1968. Photo courtesy of Shea Oakley. 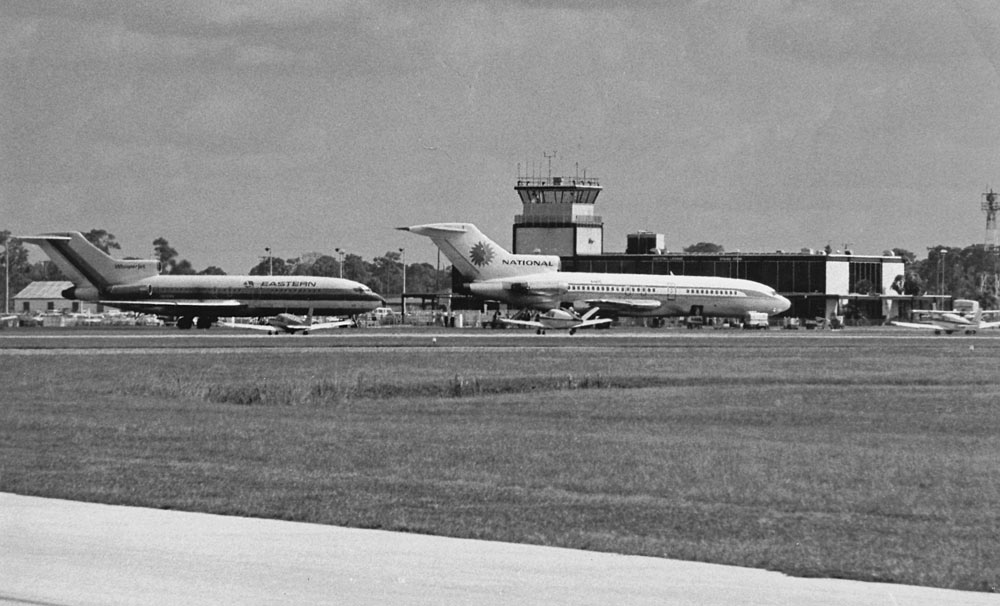 A nice study of Sarasota's two major airlines in 1968. Courtesy of Shea Oakley. 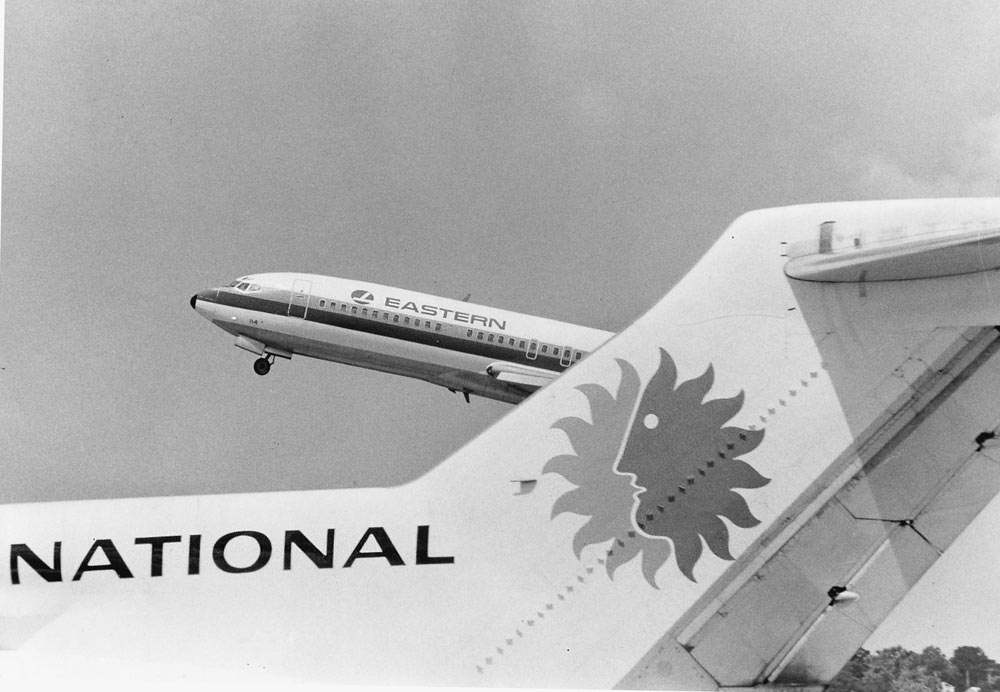 A fantastic late 1960s postcard view of Sarasota Bradenton Airport dominated by the Sun King tail of a National 727. 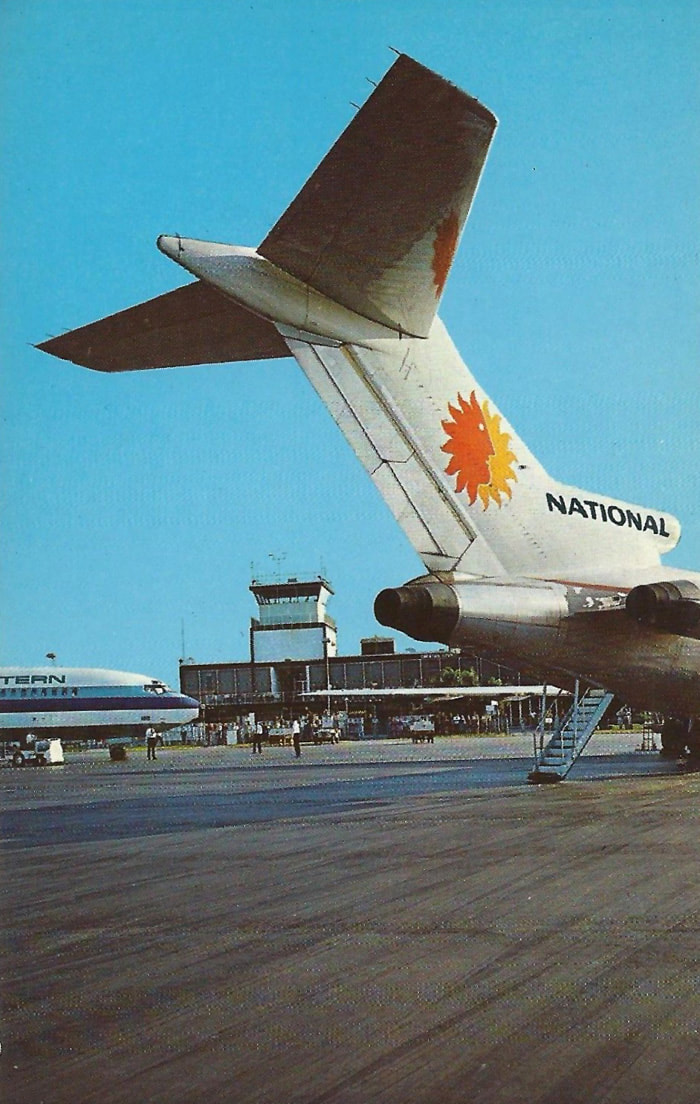 Next: We'll travel to the swinging 1970s when burgeoning tourist traffic and airline deregulation brought big changes and new airlines to SRQ. Step right this way...

NEXT PAGE: SARASOTA BRADENTON AIRPORT IN THE 1970s