This is the second part of the history of airline service at Sarasota Bradenton. The first part, covering the 1930s through the 1960s, can be found HERE.
The 1960s had been a time of rapid change at Sarasota Bradenton. National Airlines, the sole airline at the city since the 1930s, quickly found itself a distant second after Eastern Air Lines arrived in 1961. By mid-decade both airlines transitioned from older propeller aircraft to larger, faster jets, requiring constant upgrades and expansion at the airport.
This fantastic view of an Executive Airlines Beechcraft B99 parked at the Sarasota terminal appeared on the cover of the February 1970 issue of Airport Services Management magazine. Executive's southern regional headquarters were located at Sarasota Bradenton from 1968 to 1971. Photo courtesy of Shea Oakley. 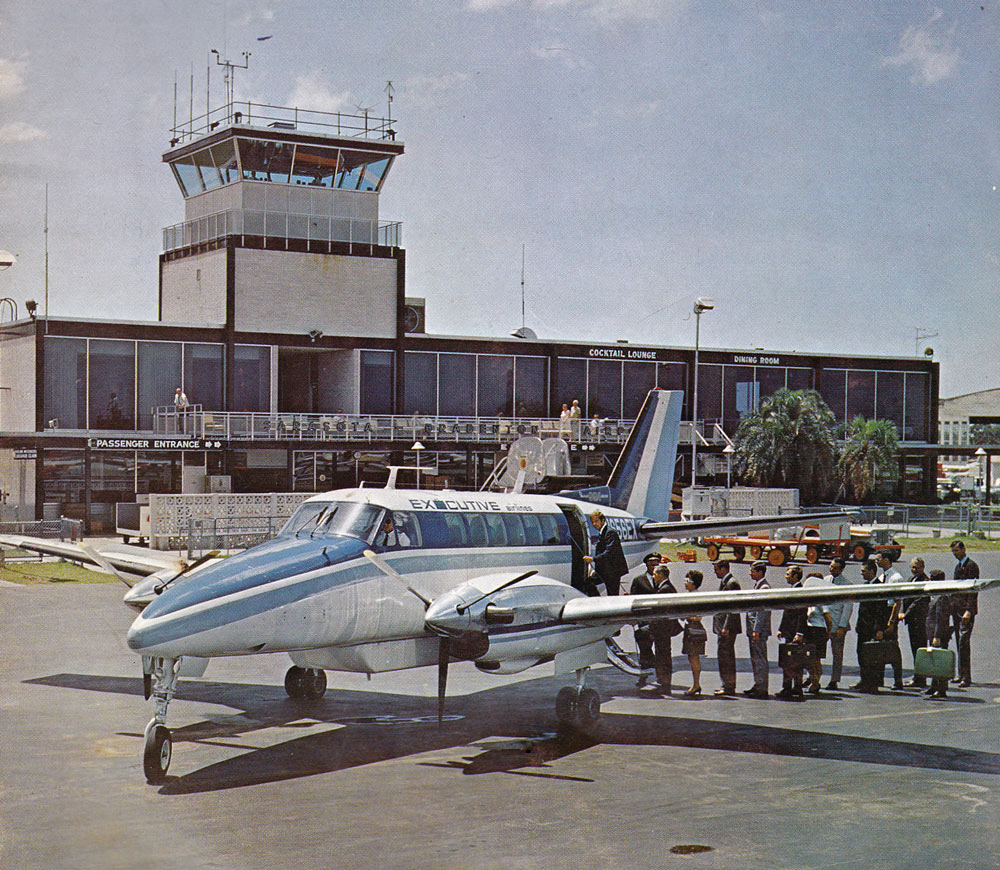 The 1960s had been a time of rapid change at Sarasota Bradenton. National Airlines, the sole airline at the city since the 1930s, quickly found itself a distant second after Eastern Air Lines arrived in 1961. By mid-decade both airlines transitioned from older propeller aircraft to larger, faster jets, requiring constant upgrades and expansion at the airport.

At the beginning of 1970, Sarasota was served by 5 passenger airlines: majors Eastern and National and commuter carriers Executive Airlines, Florida Airlines and, briefly, Mackey International. Eastern Air Lines remained the dominant carrier at SRQ into the late 1980s. Mackey and Florida both left SRQ in early 1970 which accounts for the low numbers in this chart. 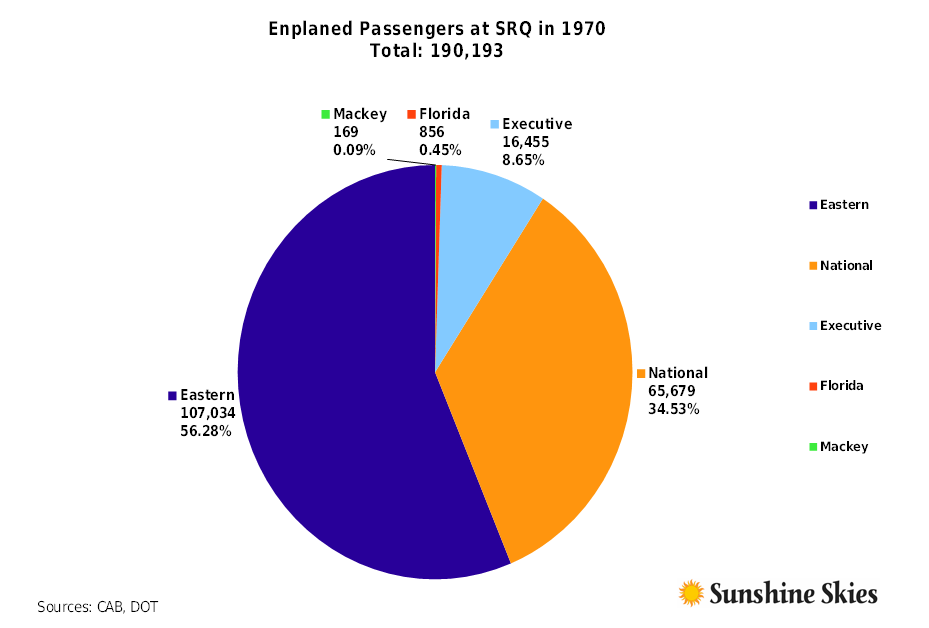 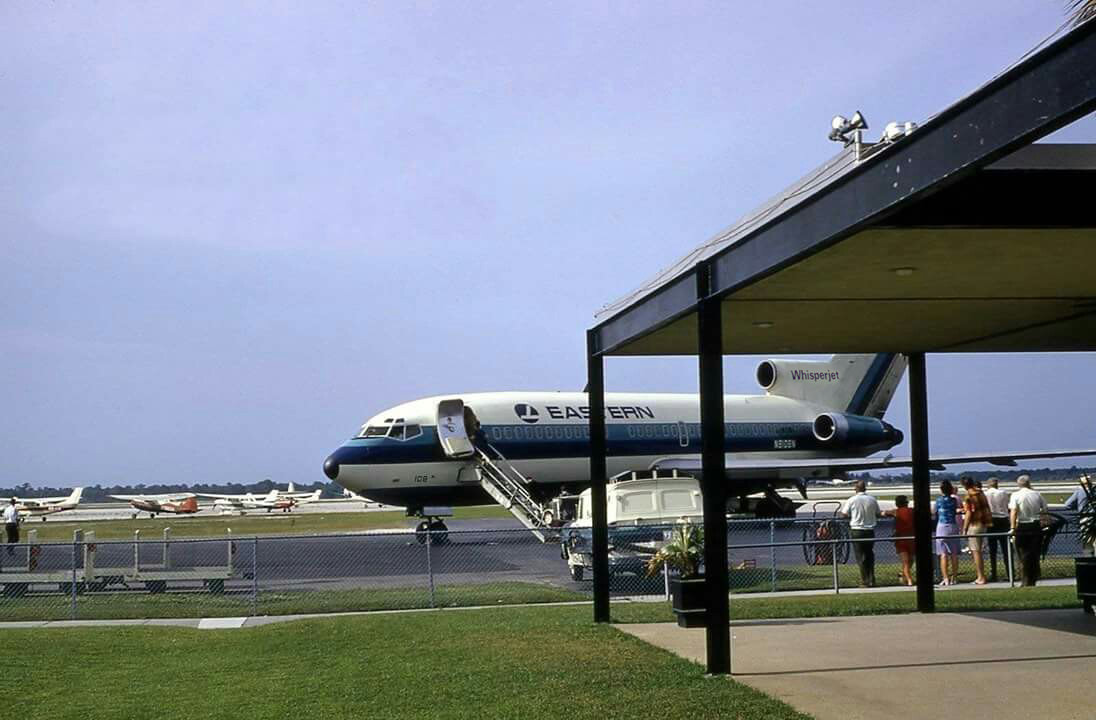 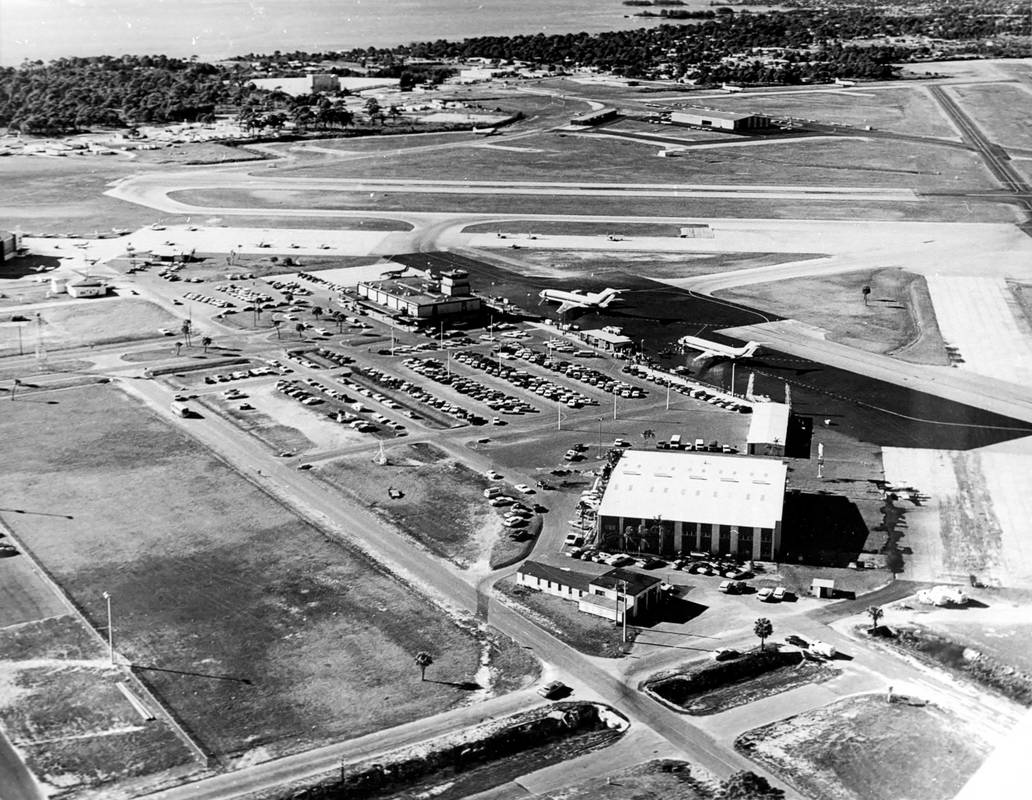 In this early 1970s photo, courtesy of Shea Oakley, a National 727-200 and Eastern Air Lines 727-100 are seen on the ramp. By this time the terminal was at or near its original design capacity. Note the once grassy area at bottom left appears to have turned into a makeshift parking lot. 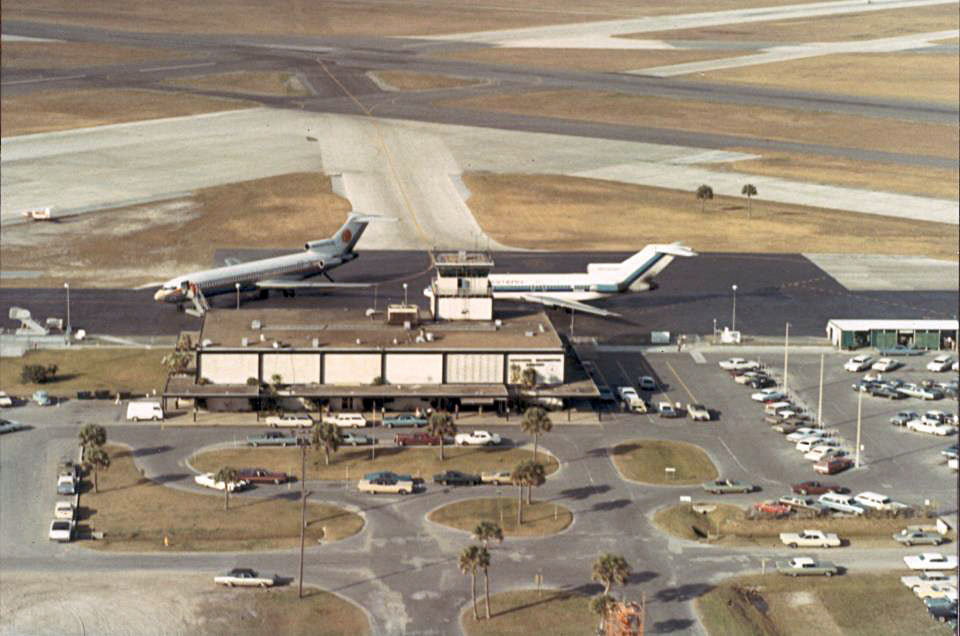 In this February 22, 1973 aerial, the aircraft parking configuration had been altered slightly from the above photos, with Eastern's planes parking at an angle instead of in a straight line, probably to allow room for one more aircraft. 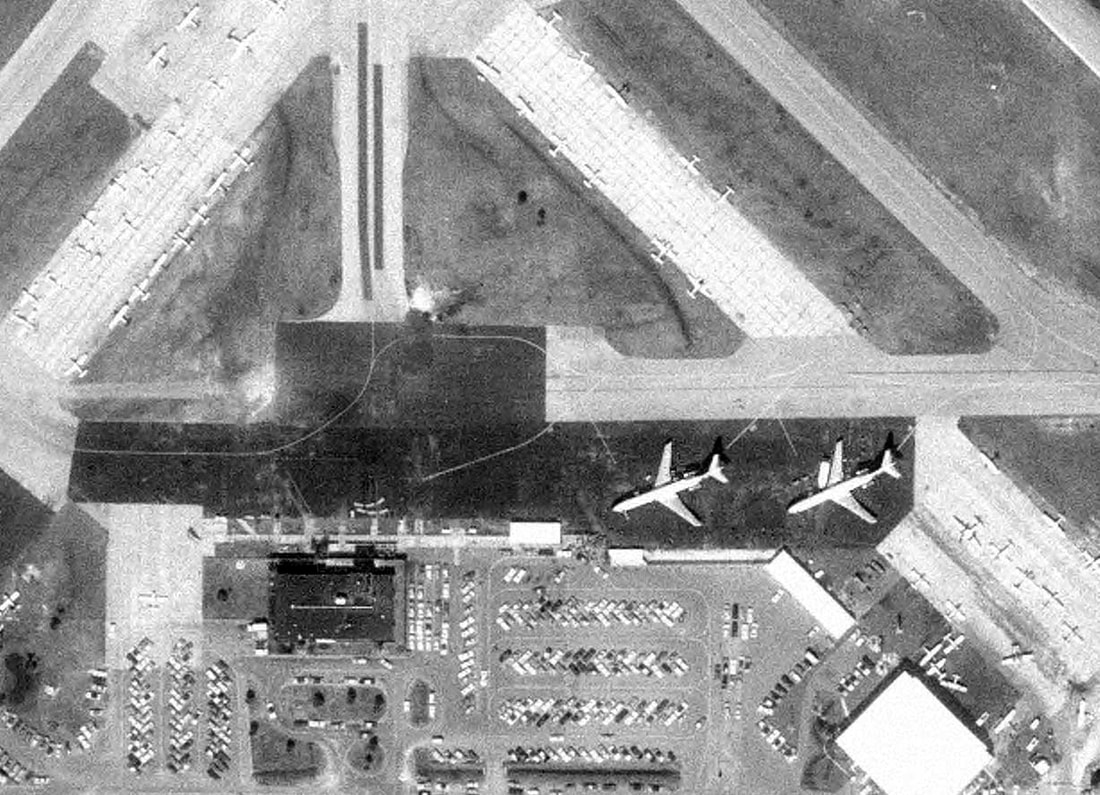 The next photo shows a National Airlines Super DC-8-61 at Sarasota in the early 1970s. This was an unusually large aircraft for SRQ , probably longer than the length of the terminal at that time. This photo was sent in by David Wick who added, "This one IS NOT my picture. I traveled to SRQ a lot as a kid – one time (1973 I believe) I noticed in a National Airlines timetable that Sarasota had, for a short time, a scheduled DC-8 service. I was always intrigued by this – the longest SRQ runway during the 70s was right around 7,000 feet – fairly short for DC-8 service, especially a fully loaded aircraft on a hot day (although obviously not impossible as evidenced by the Delta DC-8 pic you have on your website!)

Shortly after this photo was posted, Shea Oakley contacted me with additional information. "I scanned this a while ago from the Sarasota-Manatee Airport Authority archives. The DC-8 service lasted only for a couple of months in late 1973-early 1974. I compared photos from the airport archives with my NAL timetable collection and discovered that the routing was MIA-SRQ. The airport archives included a couple of shots showing both -21 and -51 equipment being used. They were taking pictures of buildings around the airport in Nov. 1973 and these DC-8's showed up in the background." 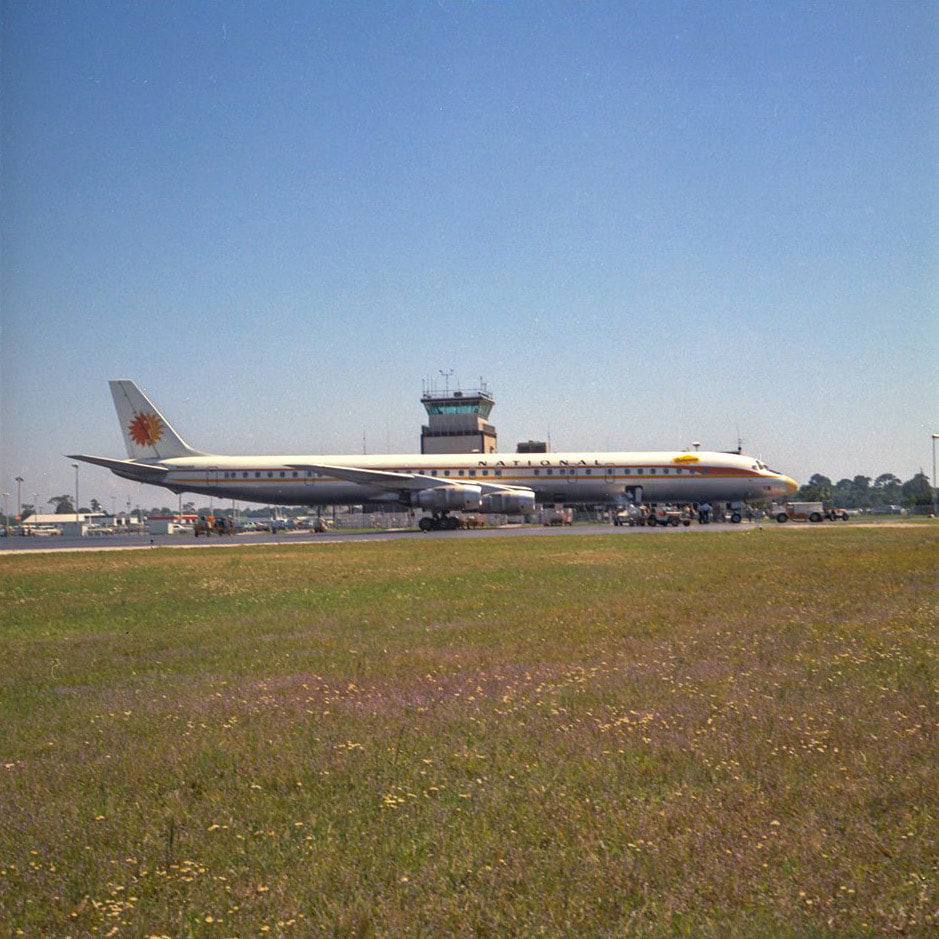 According to Shea Oakley, "The first arrival of a NAL DC-8 at SRQ was in 1970 (I have a page from what looks like an airport "scrapbook" about this.) Probably an equipment sub."

The December 1973 edition of Airport Activity Statistics of Certificated Route Air Carriers, published by the Civil Aeronautics Board, contained this bit of information about aircraft types flown by National to Sarasota that year. It shows 237 DC-8 departures from SRQ for 1973. The service ended in 1974.

Another circa 1973-74 view of the crowded ramp showing a National DC-8-61 sharing space with an Eastern DC-9 and 727-100 with an unidentified DC-3 in the distance. Look at that crowd of passengers along the fence!  Photo from the airport archives via Shea Oakley. 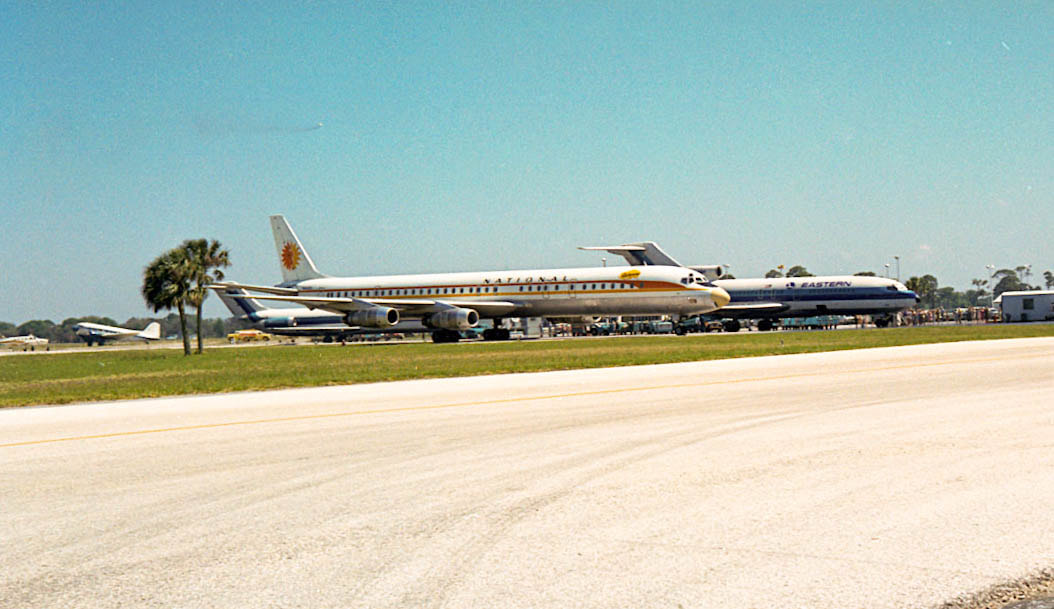 Yet another great view of National's DC-8 service to Sarasota courtesy of Shea Oakley.. 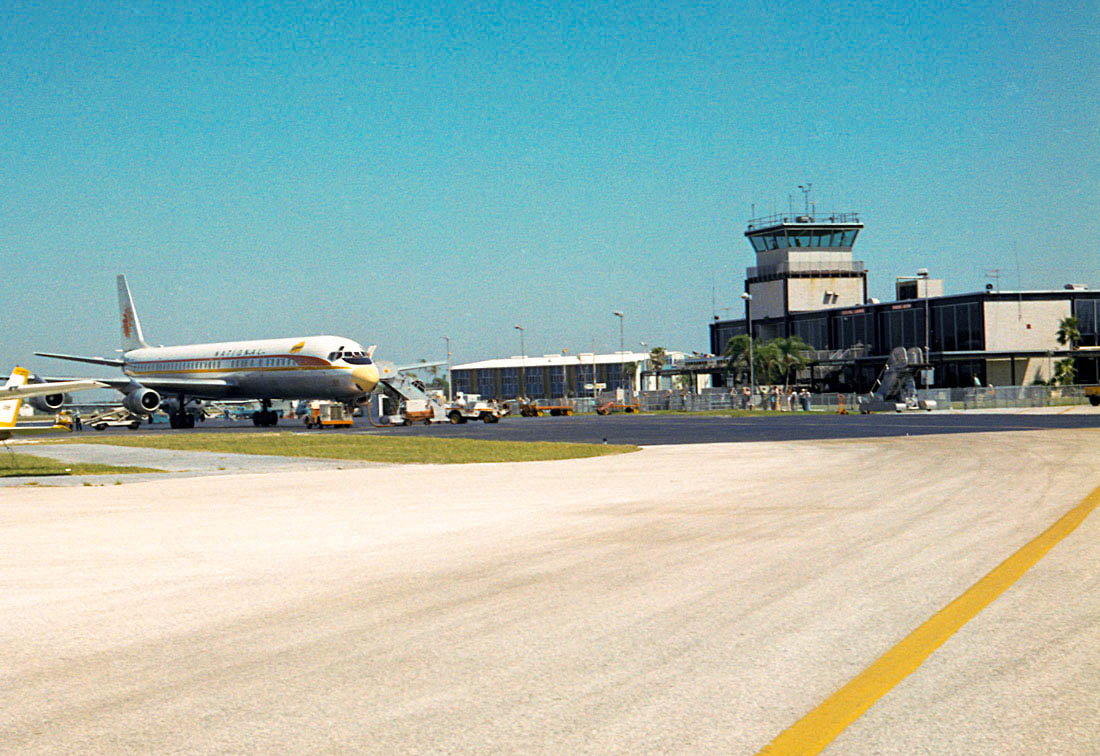 A pair of Eastern 727s as seen from the Sarasota control tower on September 10, 1973. Photo courtesy of Shea Oakley. 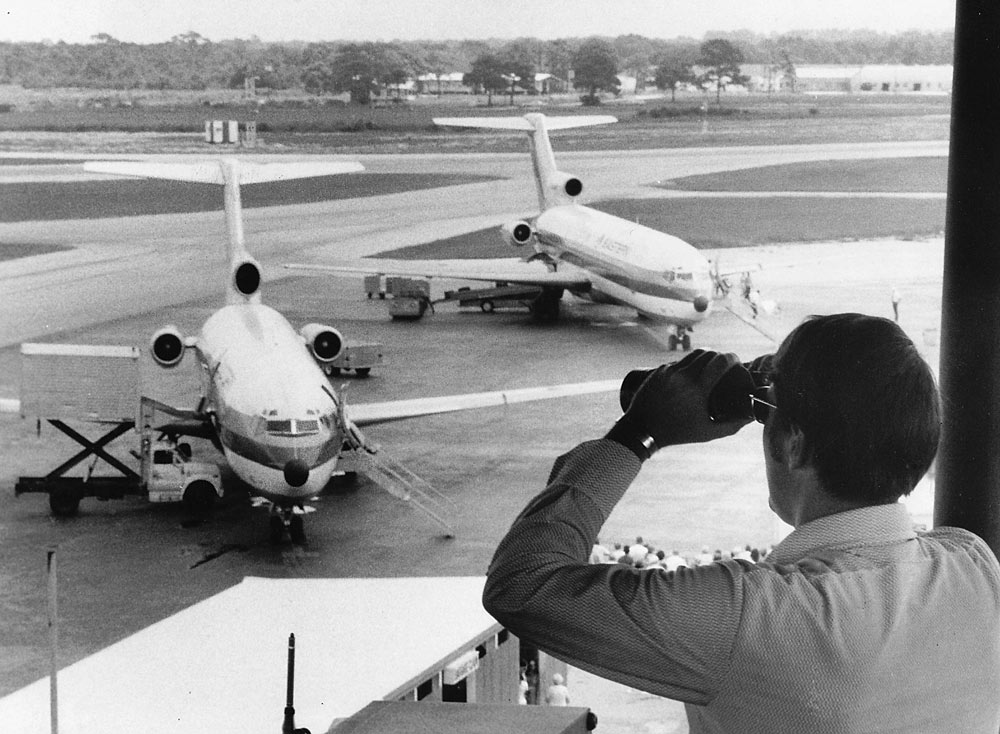 Commuter airlines continued to come and go throughout the decade. Mackey and Florida Airlines left in early 1970 but Florida returned in 1974 and eventually moved its headquarters to Sarasota. Executive Airlines went out of business in late 1971 and was quickly replaced by Shawnee Airlines which left a year later in 1972, returning briefly in early 1977.
From mid-1974 through mid-1975, commuter Sun Airlines operated a Sarasota - Tampa - Tallahassee route with 3 round trips each weekday. DOT records show that less than 1,000 passengers were boarded by the airline at Sarasota during that time.
National Airlines was hurt by a series of labor actions during the 1970s. This July 1974 scene shows the ticket counter during the mechanics strike that shut down the carrier for over three months. A flight attendants strike followed in 1975. ​Photo courtesy of the Manatee County Public Library System. 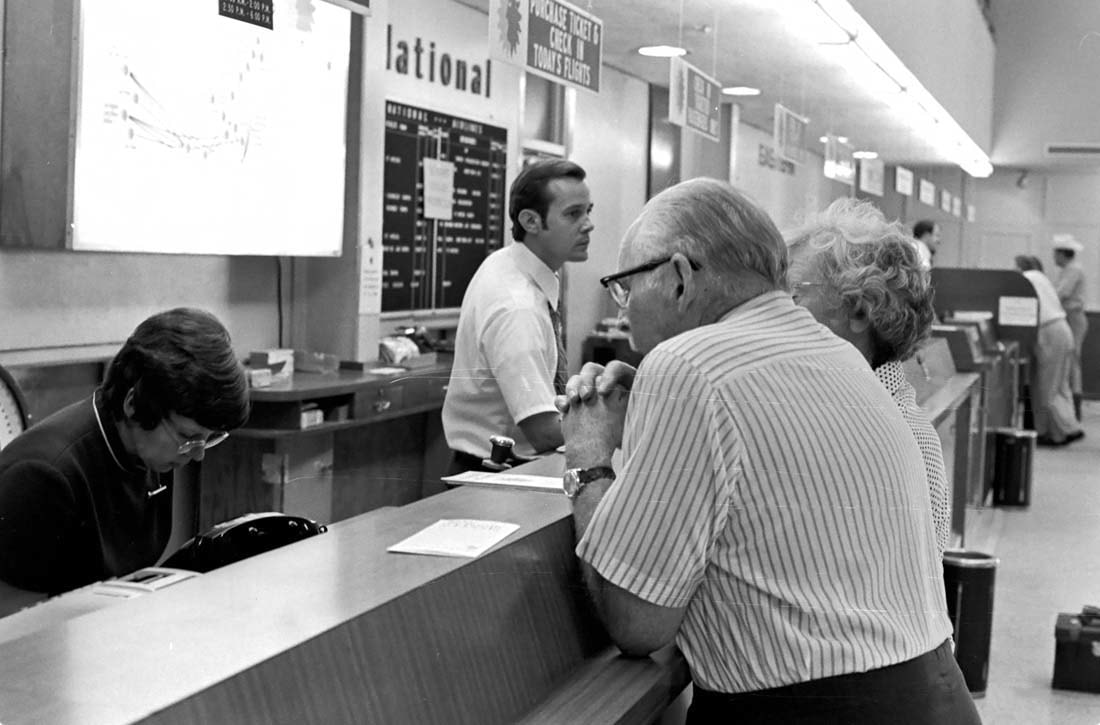 National's labor woes helped Eastern remain the dominant airline at Sarasota Bradenton throughout the 1970s. Eastern enjoyed a virtual monopoly at the airport during National's shut downs and, as evidenced in this 1974 photo, business was booming. ​Photo courtesy of the Manatee County Public Library System. 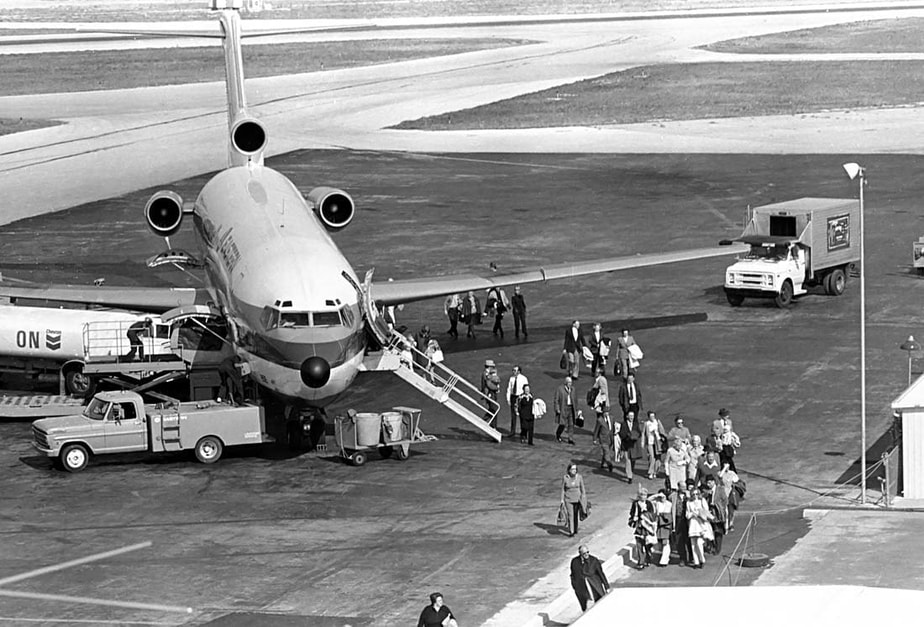 Florida Airlines returned to Sarasota in 1974 with non-stop flights to Ocala, Tampa, and Punta Gorda with continuing service to Fort Myers, Miami, Gainesville and Jacksonville. By 1975 the airline had moved their headquarters to SRQ. 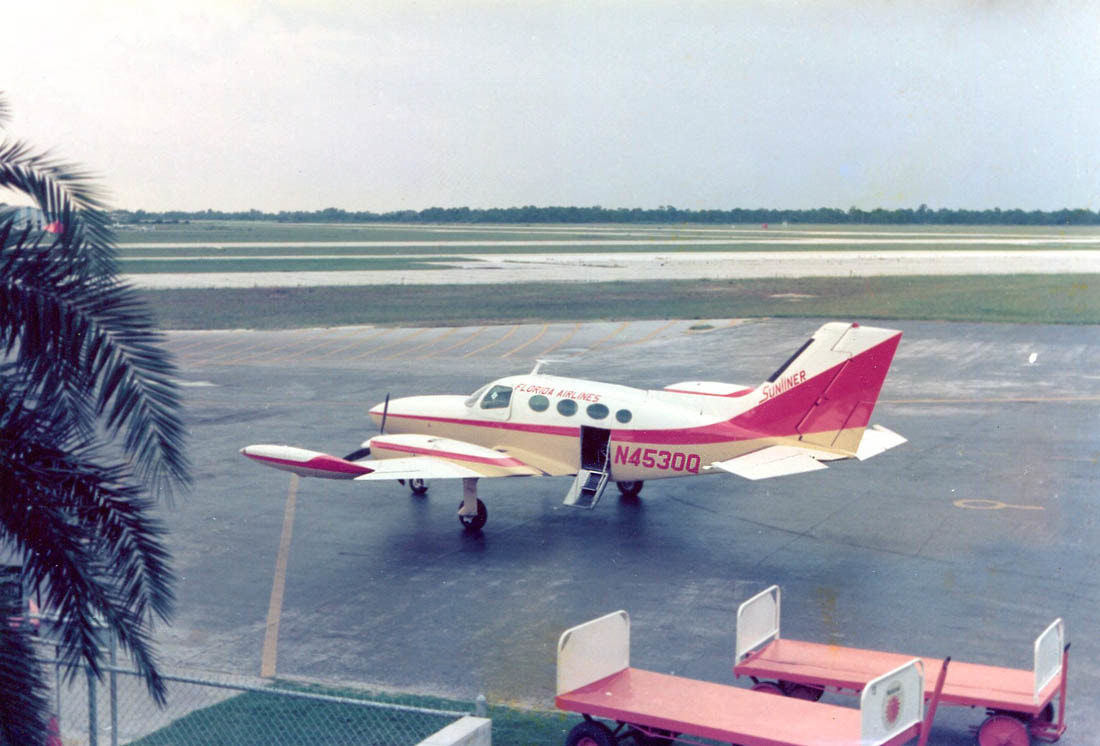 NEXT: SRQ IN THE LATE 1970s
If you would like to contribute photos, scans, stories or additional information about any of the airlines, airports or aircraft on this site, please contact me, David Henderson, using the mail icon above. Help preserve the colorful history of aviation in Florida and Georgia!