On December 8, 1965 Delta became the first airline to operate the Douglas DC-9 and used them to replace their aging post-war propeller aircraft on medium and short-haul routes. The DC-9s allowed Delta to introduce jet service for the first time to smaller cities across the southeast such as Chattanooga, TN, Columbus, GA, Macon, GA, and Monroe, LA. The DC-9s were originally painted in a sideways "widget" color scheme. Delta retired the DC-9 on January 1, 1993 but inherited them again through the merger with Northwest Airlines in 2010. The final DC-9 was retired on January 7, 2014. 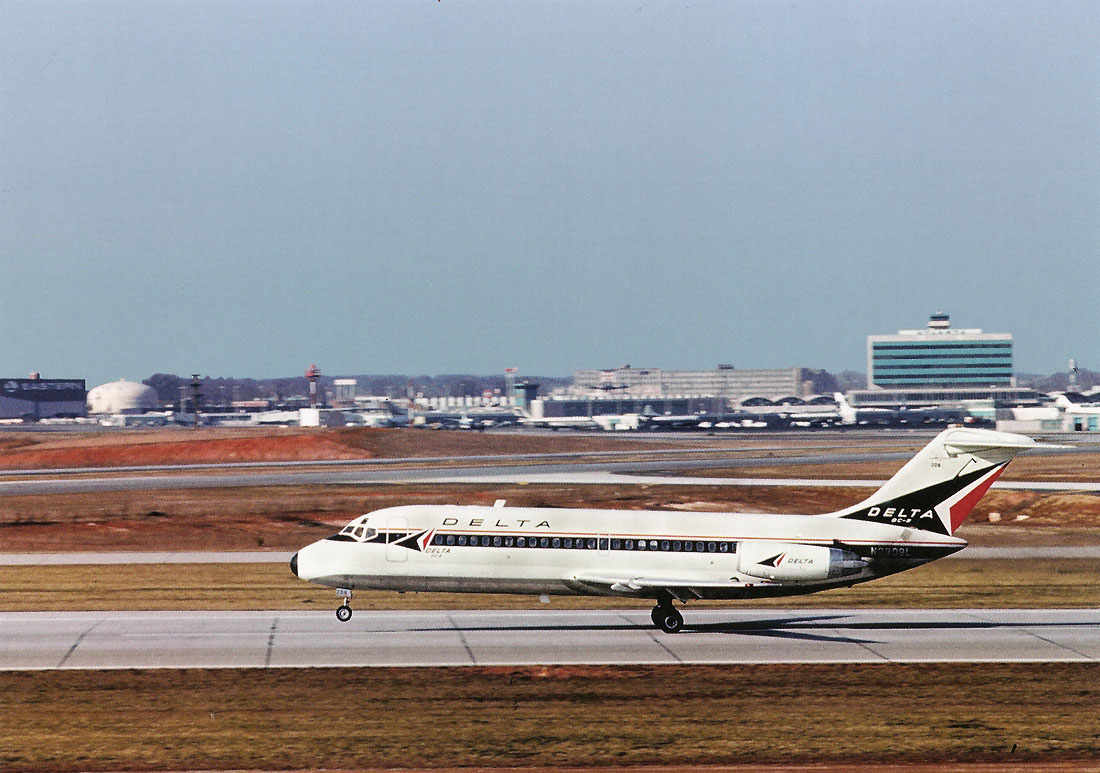 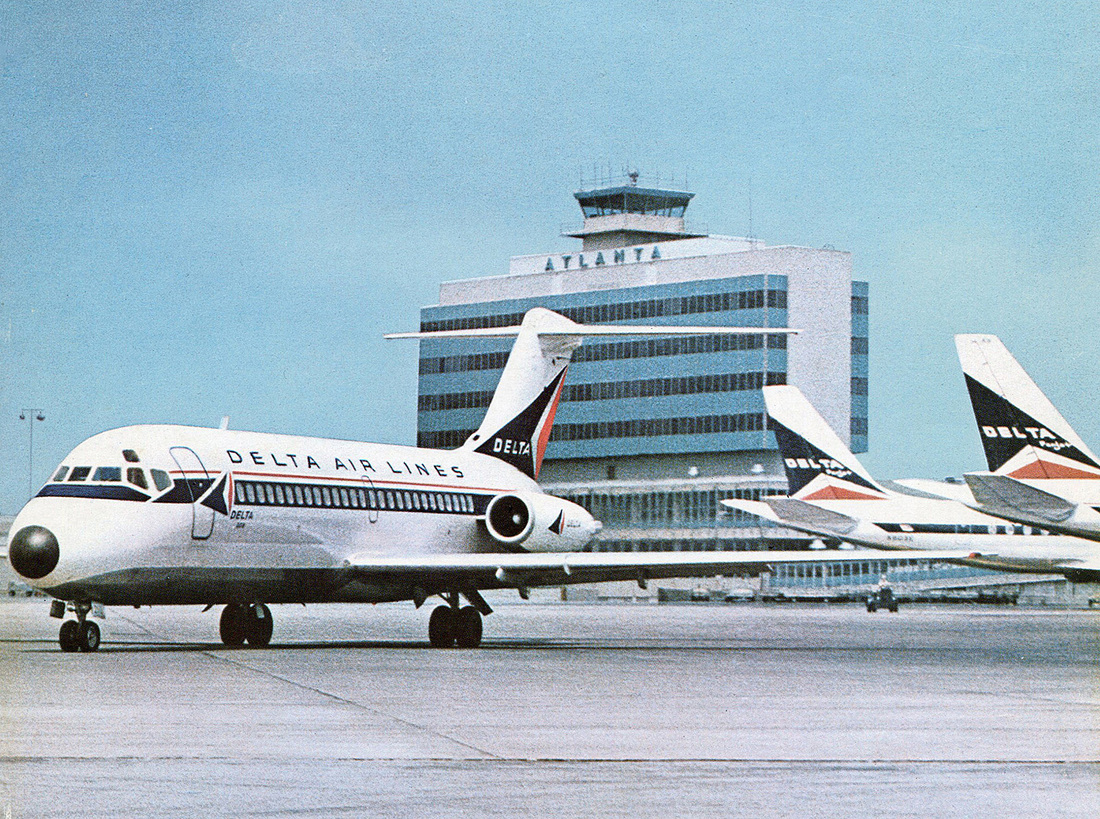 Here's a photo of stewardess Carol Koberlein posing in front of Delta's first DC-9 while the maintenance guys look it over. This was about 2 months before Delta put it into service and they took lots of publicity photos to show it off. Photo courtesy of the Georgia State University Library Archives. 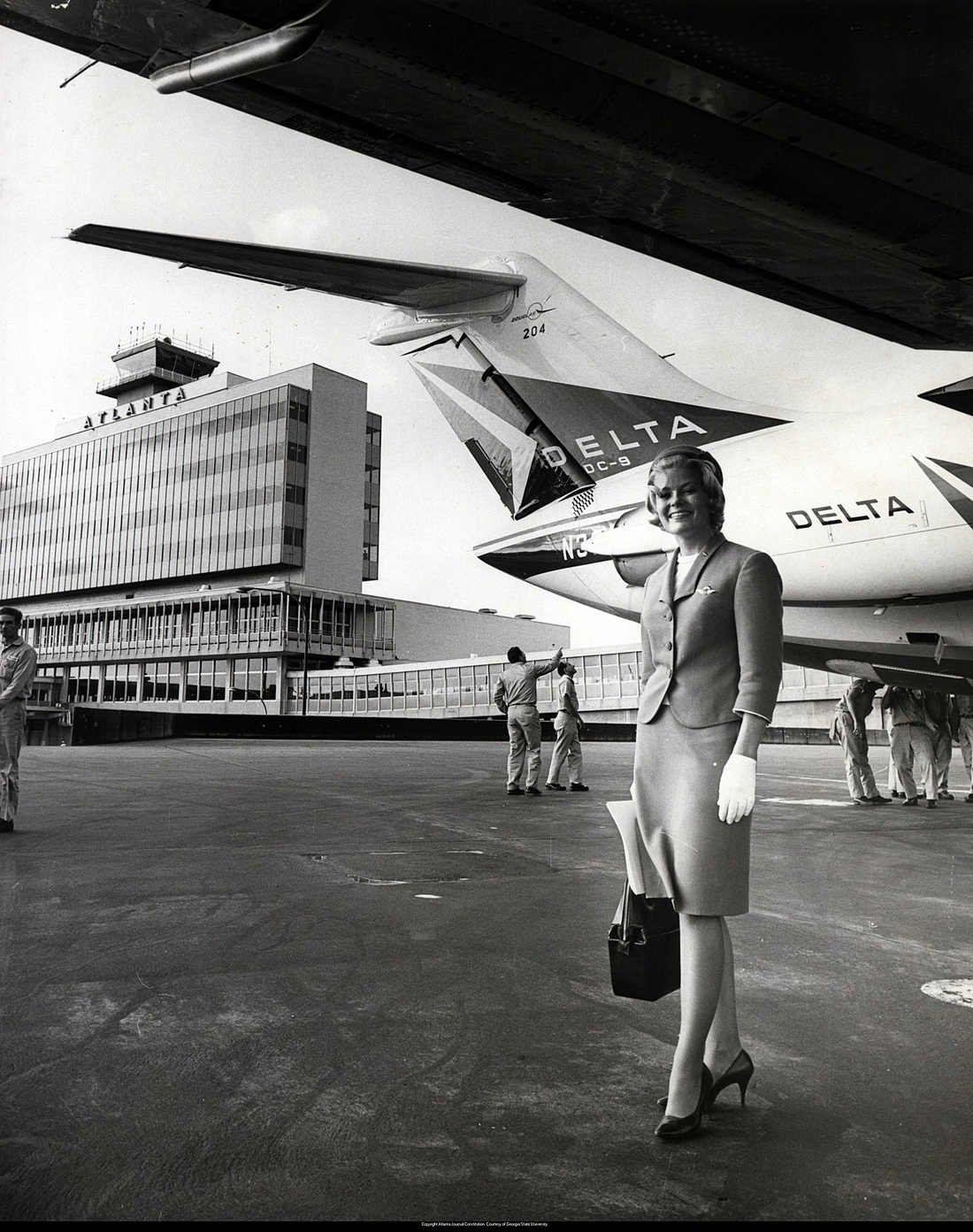 A very cool (and very difficult to scan) 3-D postcard published by Delta in the mid 1960s promoting the DC-9. This is obviously a combination of two photos made all the more apparent by the odd inclusion a portion of the background from the DC-9 photo that looks like a turquoise fence separating the aircraft! Oops. In the background you can see the end of concourse E before the rotunda was added. 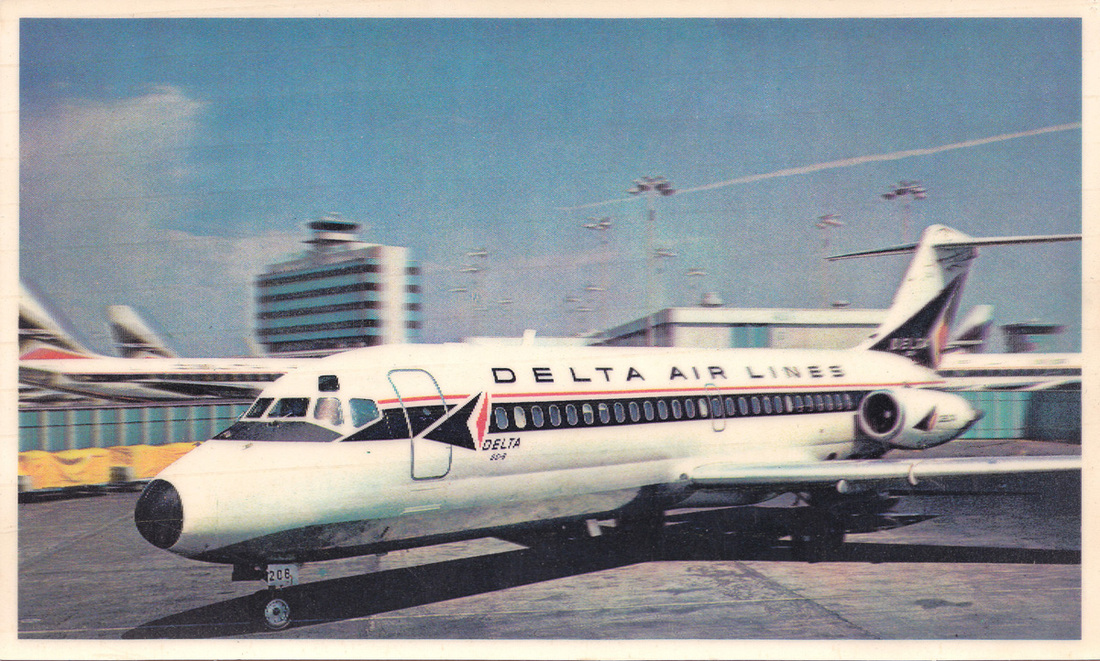 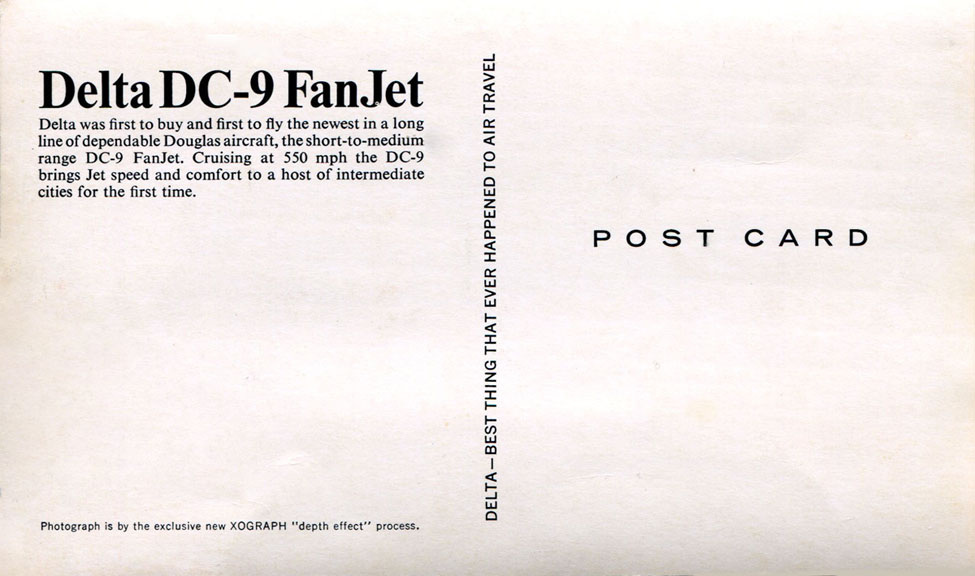 A classic 1968 Delta Air Lines photo showing DC-9s parked at Atlanta's newly completed futuristic rotundas. Delta doubled their number of gates by adding the rotundas to the ends of the existing concourses of the 1961 terminal. Concourse F is in the foreground and concourse E is just beyond that. 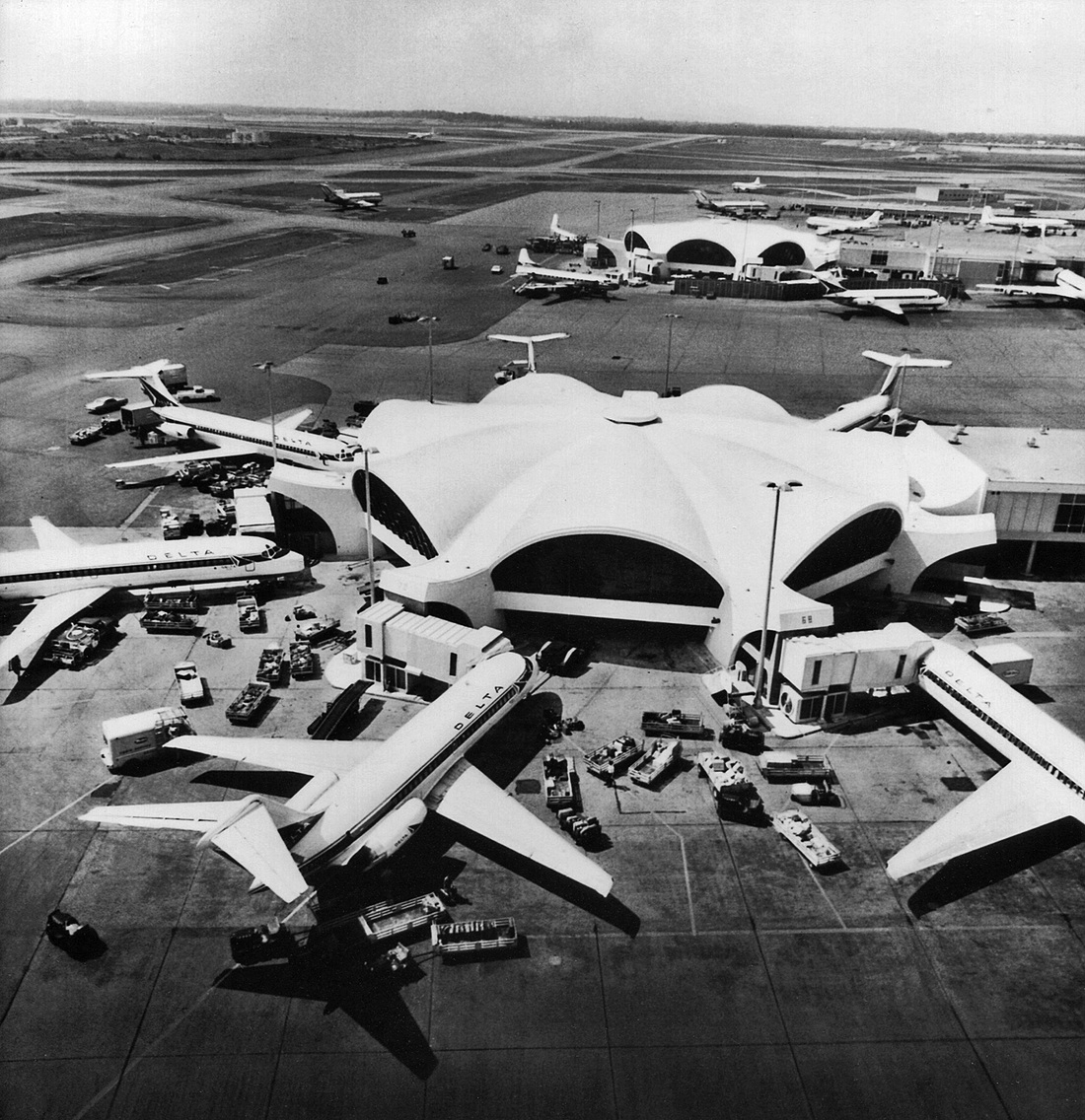 A magnificent postcard view of Delta DC-9s at the concourse E rotunda. 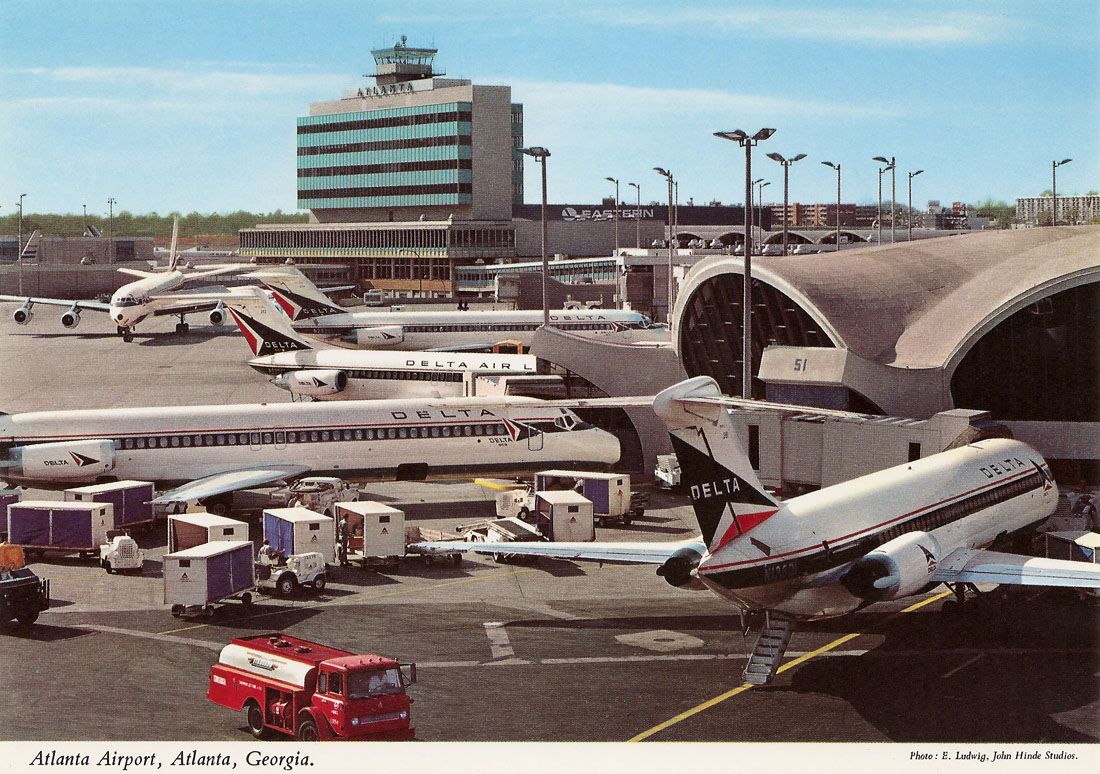 Delta Convair 880 in the original "golden crown" paint scheme takes off from Atlanta with its characteristic trails of smoke. Delta was the first airline to operate the type which entered service in May 1960 in an all first class configuration. The Convair 880, named because it reportedly traveled 880 feet per second, was the fastest airliner of its time and broke numerous speed records including a Delta Chicago-Miami flight that reached 715 mph! In the background you can see the two rotundas. This postcard was published by the Delta Heritage Museum. 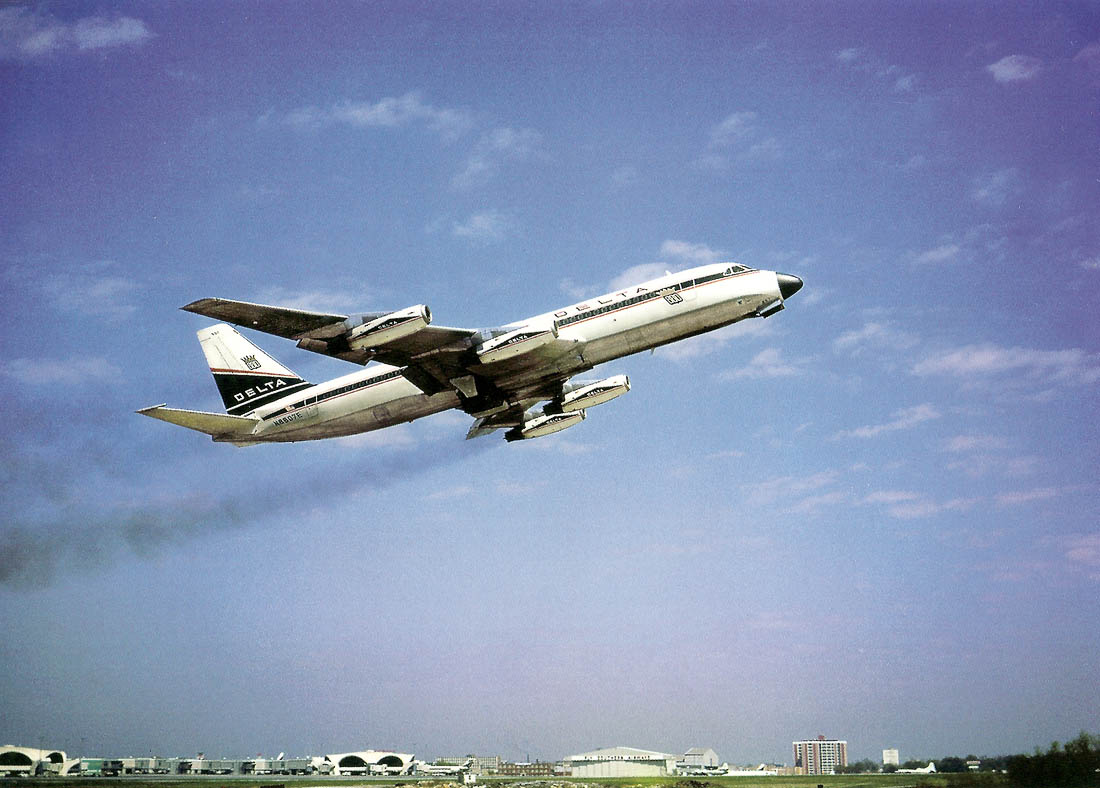 NEXT : ATLANTA AIRPORT AT NIGHT