JACKSONVILLE INTERNATIONAL AIRPORT IN THE 1980s

The previous page traced the history of Jacksonville International Airport from its construction in the 1960s up through the end of the 1970s. On this page we travel through the 1980s...

Jacksonville International Airport was just over 11 years old as the 1980s began. The 1970s had been a time of slow and steady growth but the volatile post-deregulation years of the early 80s saw a rapid succession of new airlines and the loss of several older carriers through mergers or bankruptcy. National Airlines was the first to go. The company that once dominated JAX was taken over by Pan Am on January 7, 1980 and all of its former routes at the airport were abandoned by late 1982.
The multi-million dollar International Arrivals Building was completed in summer 1980. On July 17 the new facility was visited by President Jimmy Carter and local dignitaries. Air Force One and a Pan Am 707 are pictured on the ramp. Photo from the Jacksonville International Airport flickr archives. 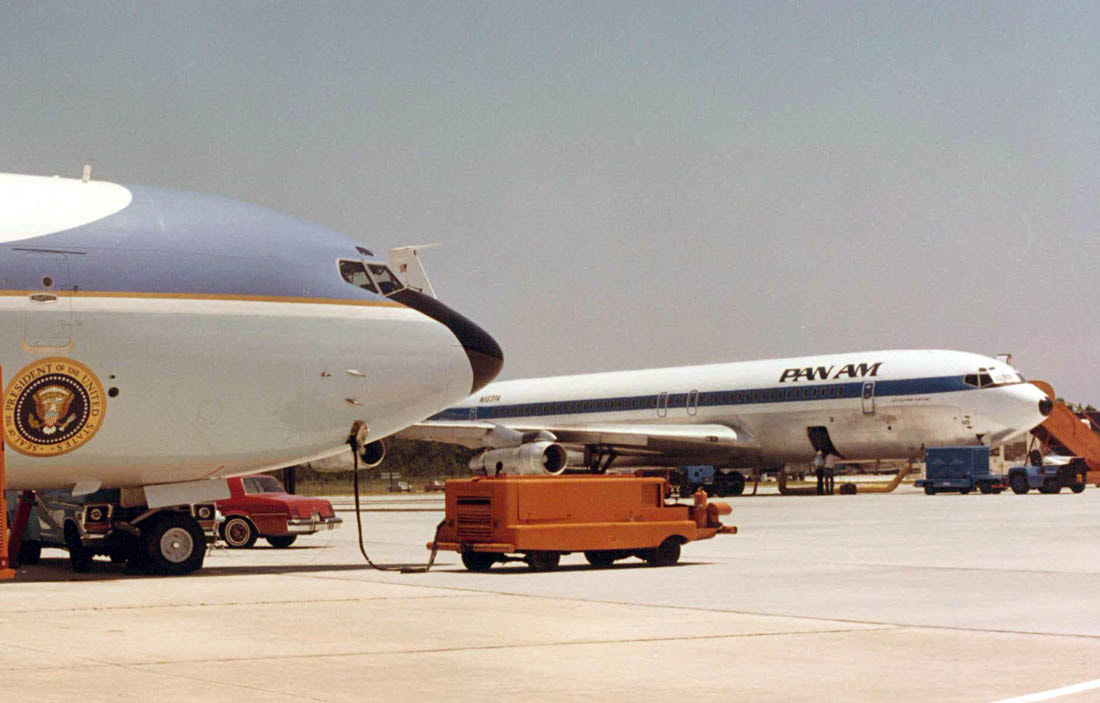 A wide view of Air Force One and a Pan Am 707 at the newly completed International Arrivals Building on July 17, 1980. Photo from the Jacksonville International Airport flickr archives. 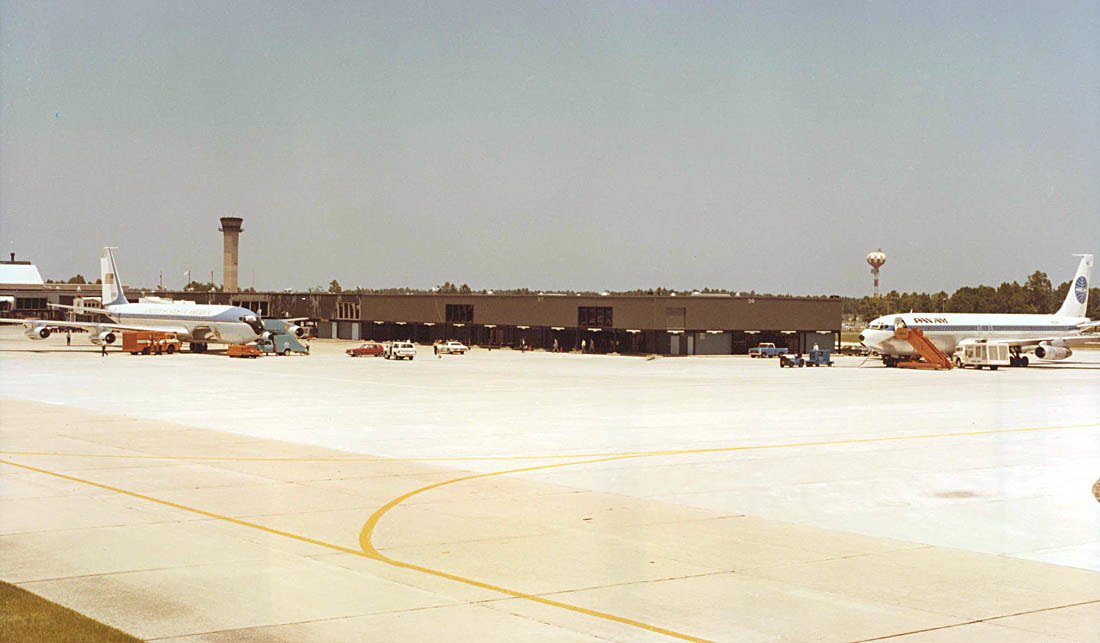 A collection of Jacksonville quick reference schedules from 1980. The Eastern timetable shows 19 departures a day: Atlanta(7), Charlotte(1), Chicago(1), Daytona Beach(6), New York Kennedy(2), and Washington National (2). Pan Am had reduced former National Airlines schedules to a mere 4 flights a day by July 1980: Houston(1), Miami(1), Norfolk(1), Washington National(1). Delta had 13 flights a day: Atlanta(7), Dallas / Ft. Worth(1), New York LaGuardia(2), Orlando(1), and West Palm Beach(2).
This terminal diagram is from a brochure about the Jacksonville International Airport printed in 1980. The complete brochure can be seen HERE. 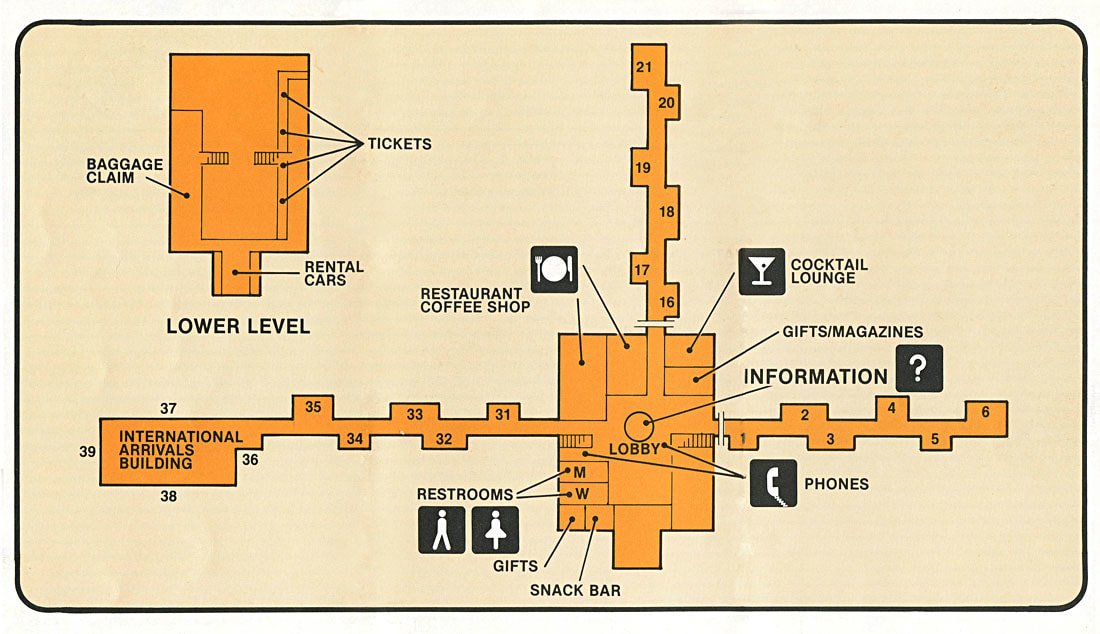 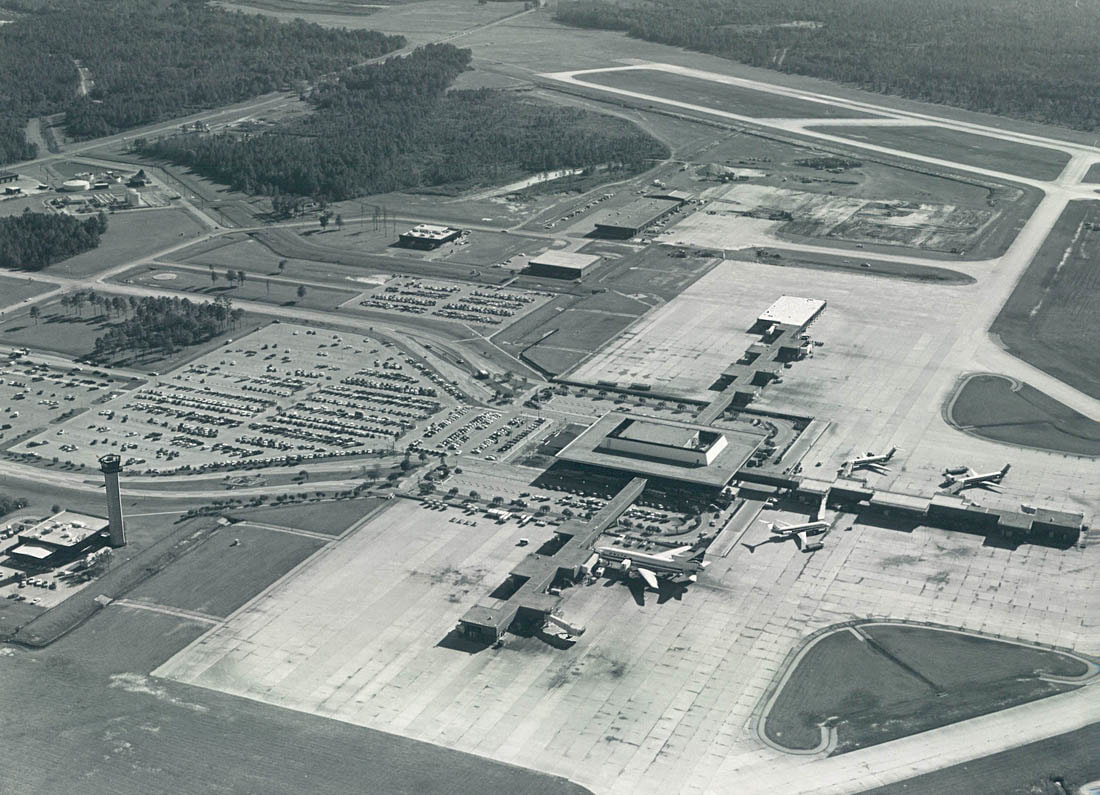 Here's a detail from the above photo. As a kid, I loved the way the Delta L-1011s towered over the parking lot, with the wing tips only about 50 feet from the road. 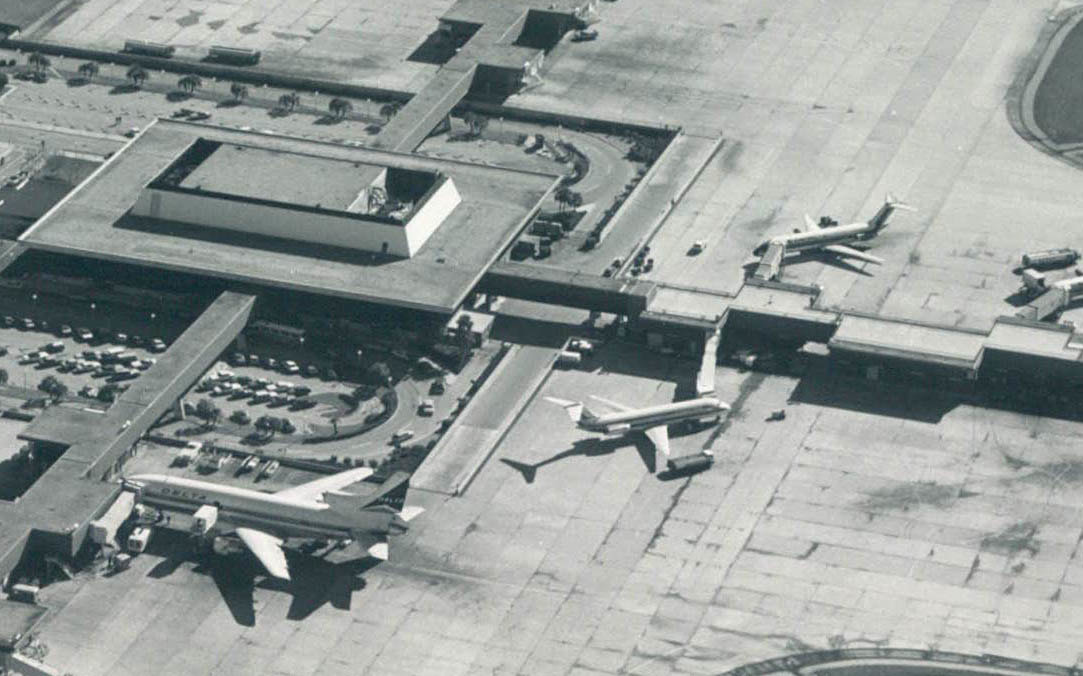 The early to mid 1980s saw numerous small commuter airlines come and go at JAX. Florida Commuter Airlines became Southern Airlines in 1981 and offered flights to Daytona and Tallahassee. Sunbird initiated service to JAX in the summer of 1981 with non-stops to Columbia, SC. Devoe Airlines flew routes from Jacksonville to Tallahassee and Orlando.
Republic Airlines was formed by the merger of Southern Airways and North Central Airlines in 1979. Southern had served Jacksonville since 1949. Photo from the AirNikon Collection, taken in March 1982, at which time Republic was flying between Jacksonville and Atlanta. 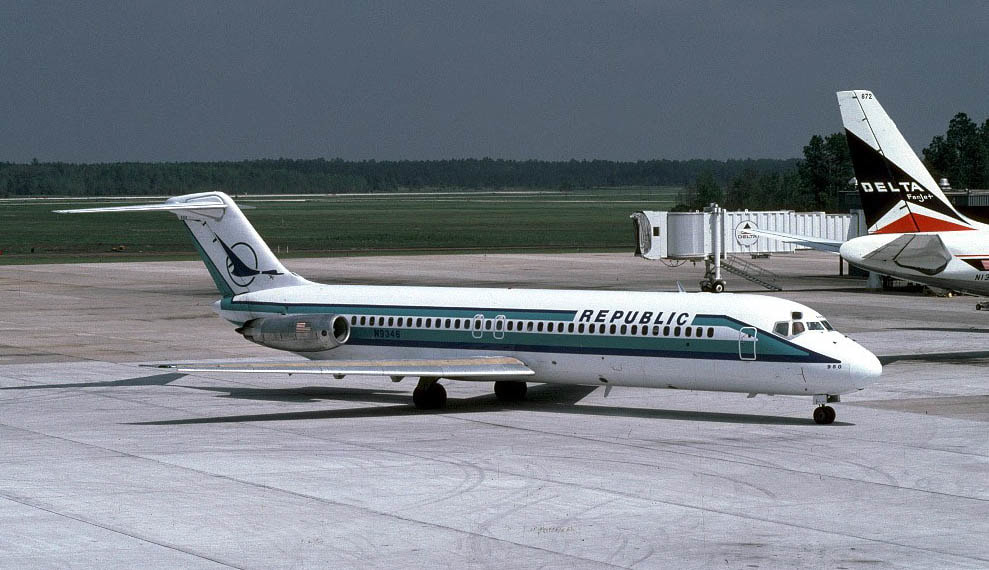 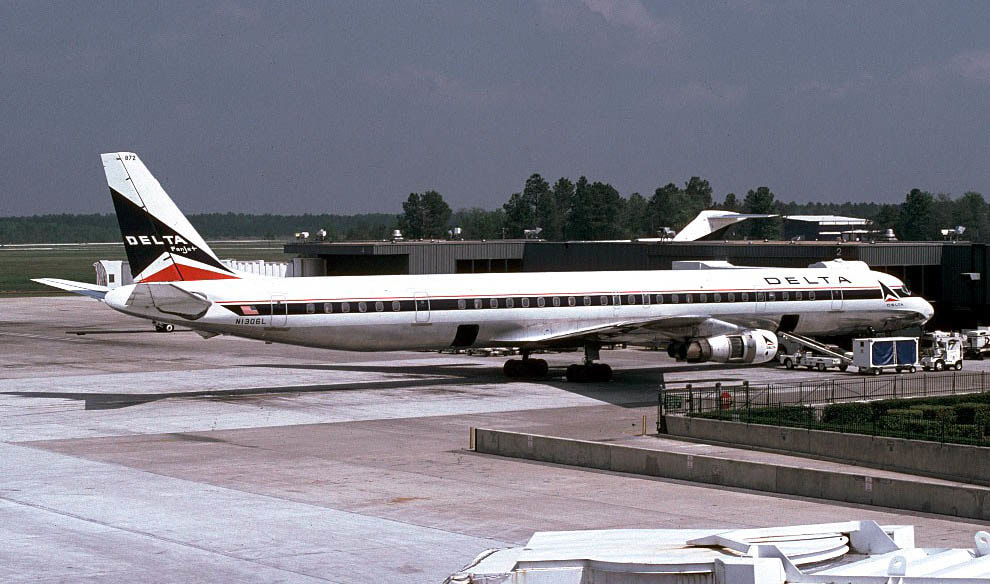 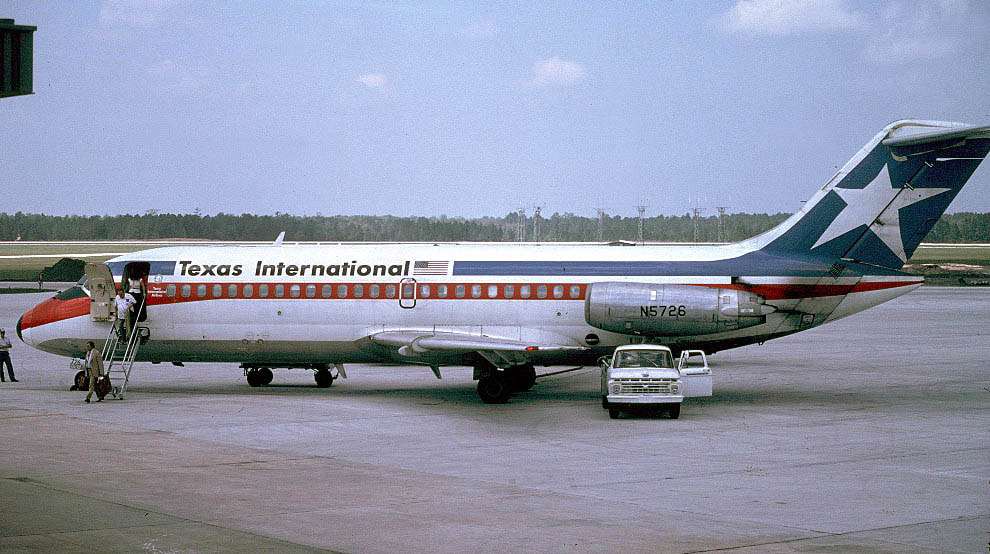 As Pan Am dropped routes to JAX, other airlines moved in to fill the gaps. In this February 1, 1982 quick reference schedule, Texas International was flying two daily non-stops to New Orleans with continuing service to Houston and Denver. On October 31, 1982 Texas International was merged into Continental Airlines which continued to fly two nonstop flights a day from JAX, one to New Orleans and one to Houston.
Eastern Air Lines 727-225 N8848E in the bare metal color scheme in March 1982. AirNikon Collection . 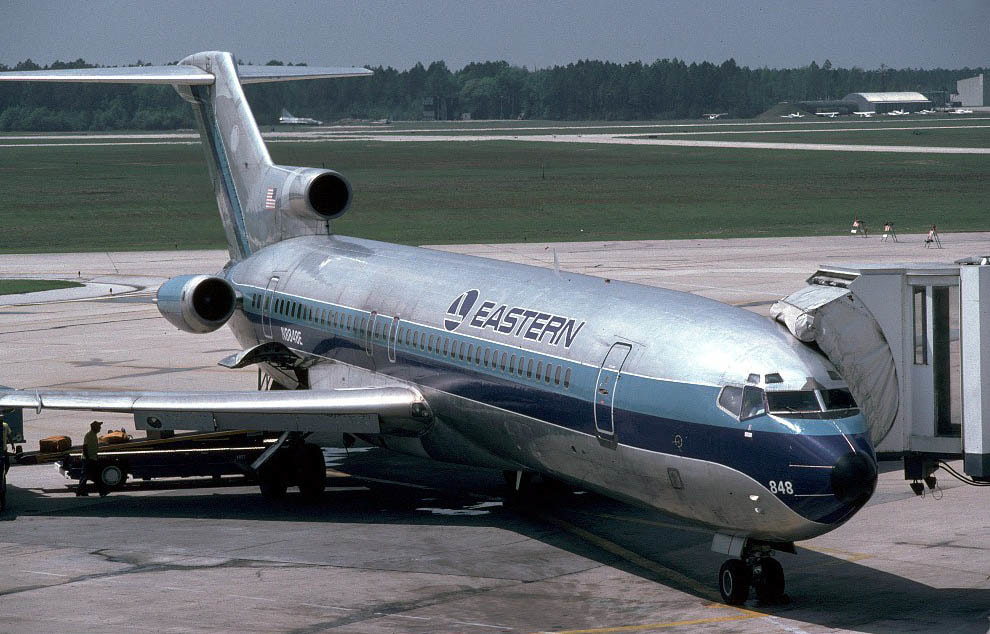 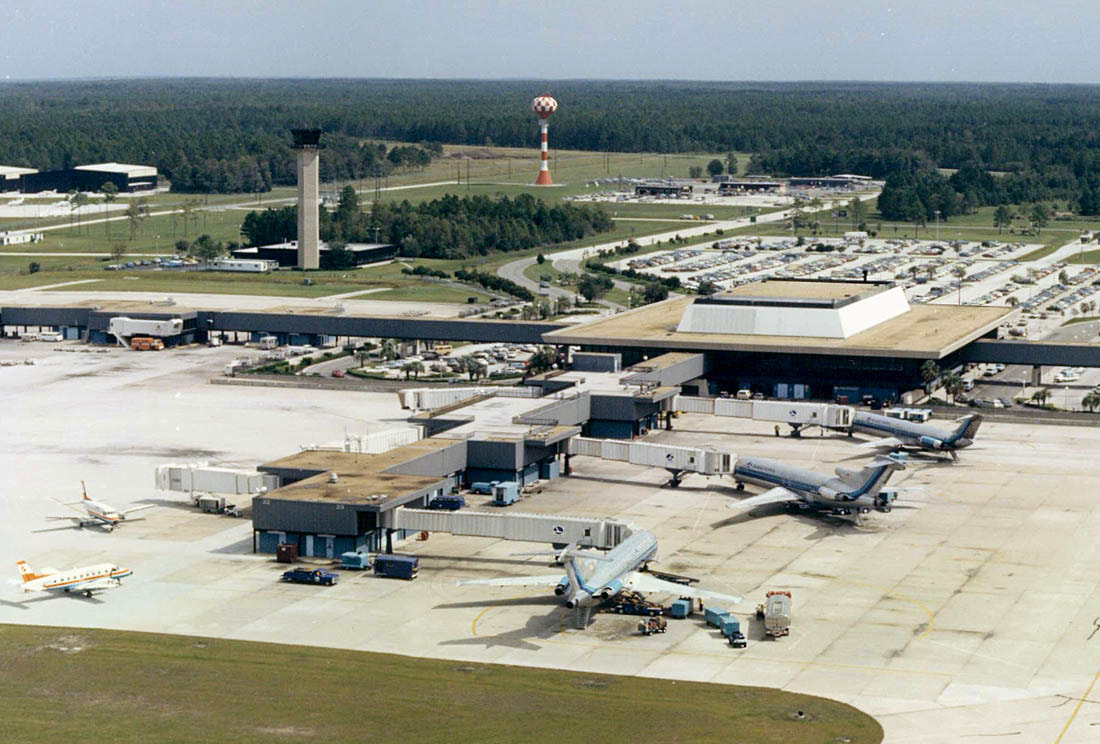 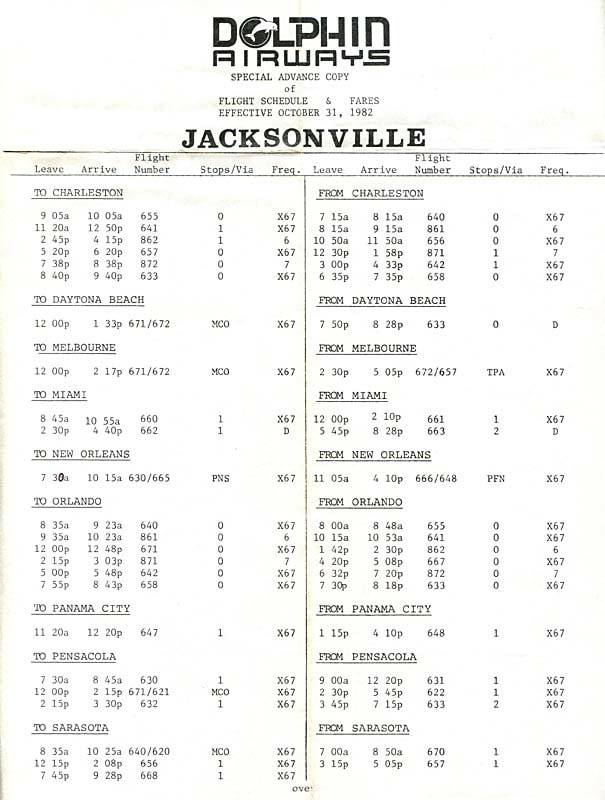 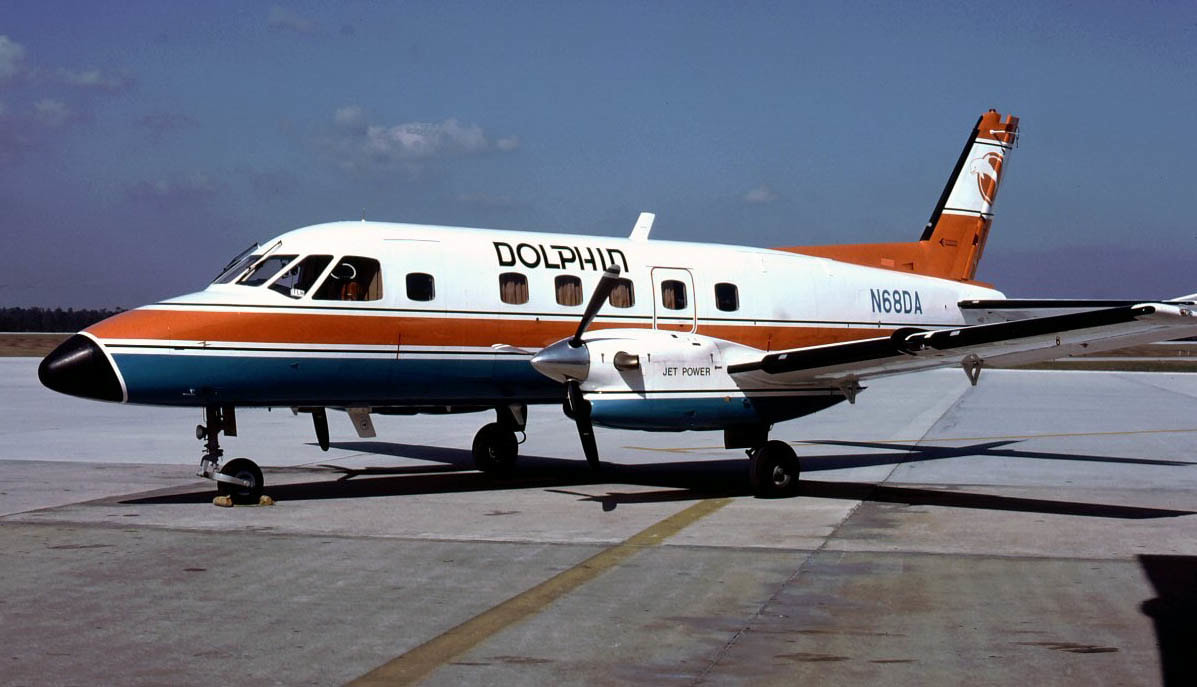 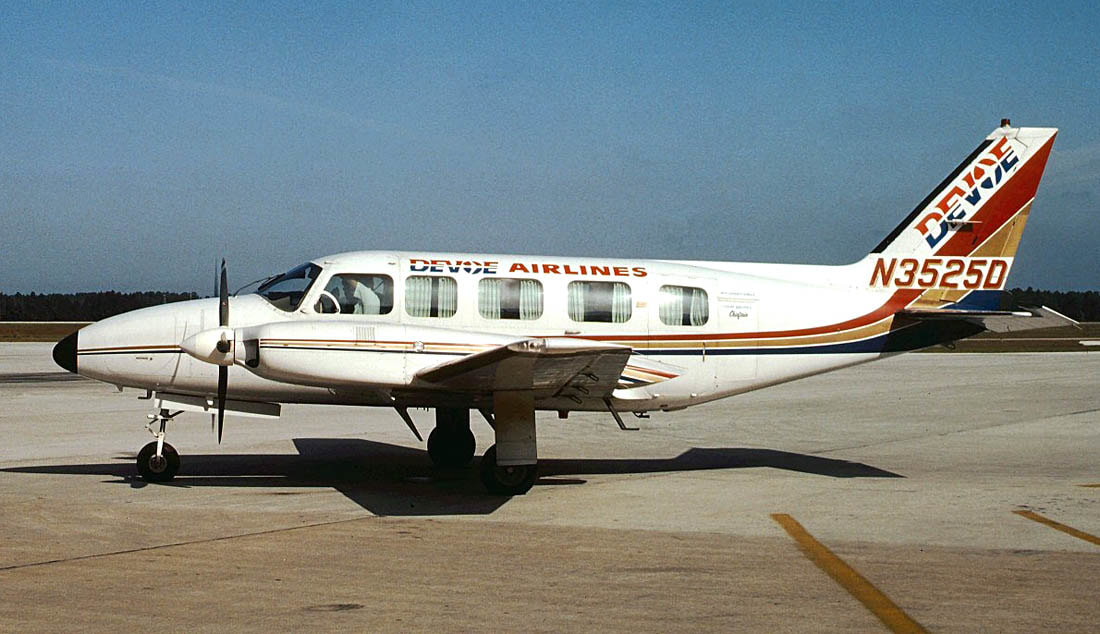 Piedmont Airlines added Jacksonville to their system in 1982 with nonstop flights to their Charlotte hub. Ozark began service to JAX in 1984 with two daily nonstops to Nashville, continuing on to their St. Louis base.
Circa 1983 view showing the reconstruction of the south ramp. It appears that the concourses are being repainted from the original dark brown to a lighter gray. Photo from the Jacksonville International Airport flickr archives. 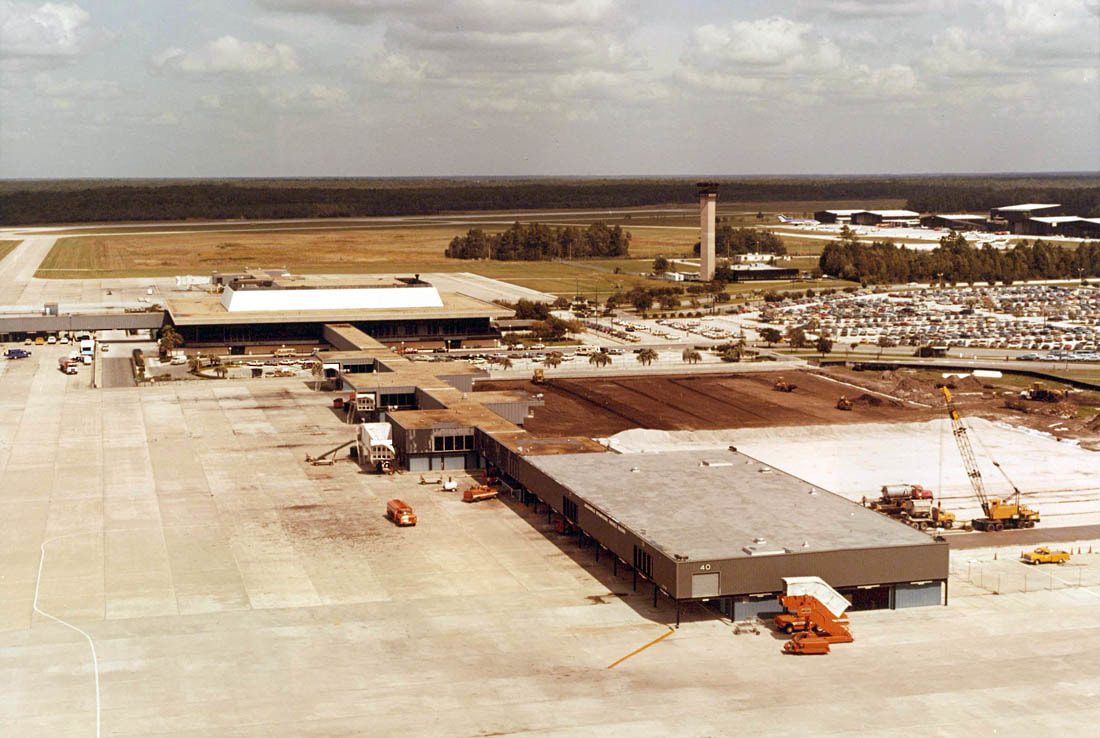 Continental's golden DC-9 N521TX in beautiful morning light, pictured at JAX in May 1983. This was a former Texas International plane. Photo by Ellis M. Chernoff . 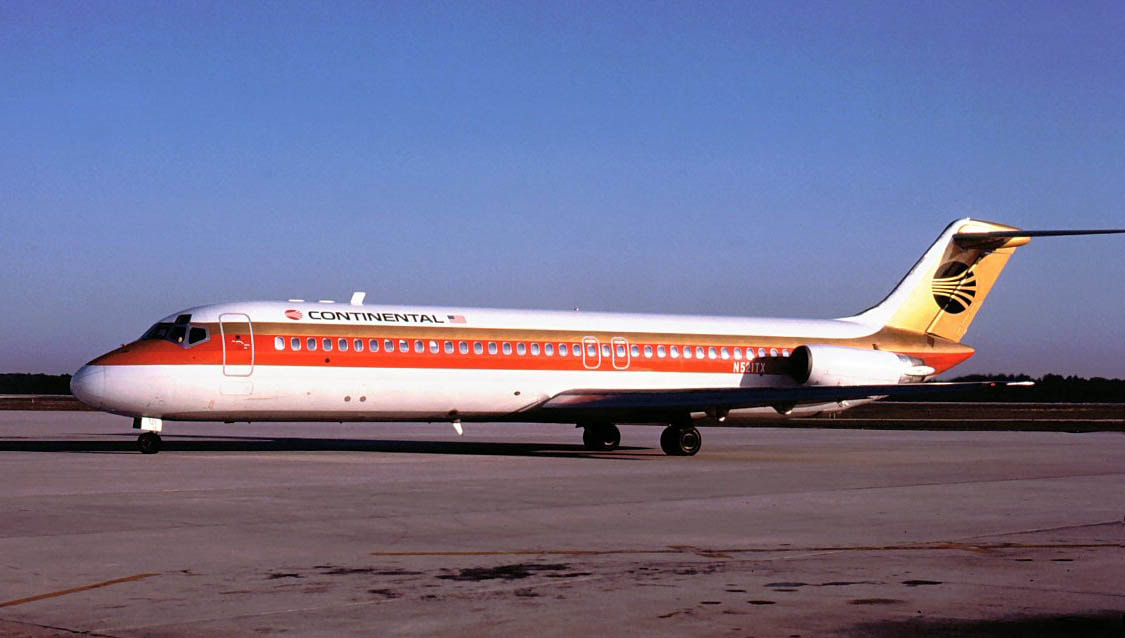 More commuter airlines in the mid 1980s: PBA began flying to Jacksonville on February 1, 1983 with 4 flights a day to Tampa and 3 to Tallahassee. ​Trans Air began service in 1984 with 2 daily round-trips to Orlando. Southern Express served JAX 5 times a day from Tampa in 1985. Other commuter airlines that served JAX in the mid to late 1980s include Air New Orleans and Comair.
After only three months at JAX, PBA had increased flight frequencies to 4 daily round-trips to Tallahassee and 10 round-trips to Tampa, flown with Embraer Bandeirantes and YS-11 turboprops. YS-11 N259P is shown at Jacksonville in May 1983. PBA would later add a Jacksonville - Ft. Lauderdale - Miami - Key West route, also flown with YS-11s. Photo by Ellis M. Chernoff . 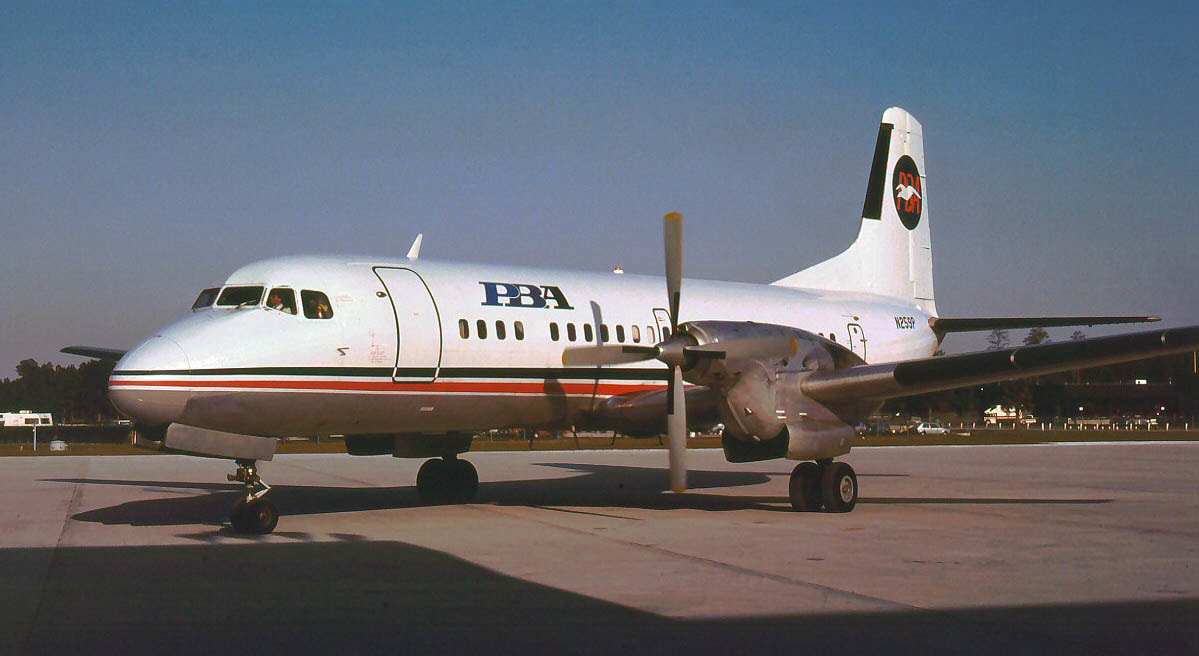 Low-cost, no-frills carrier People Express arrived in 1981 and quickly became one of the top airlines at Jacksonville. By 1983 they were surpassed only by Delta and Eastern in number of passengers boarded at JAX. N433BN is pictured in November 1983. Photo by Ellis M. Chernoff . 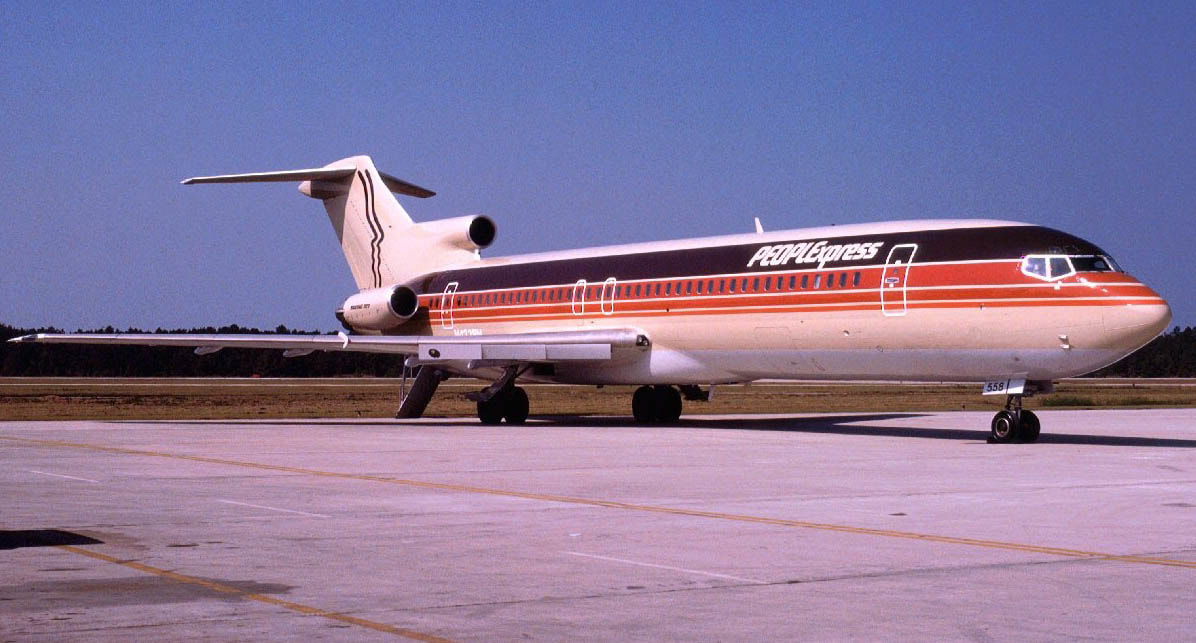 An Ozark  DC-9 taxis to the gate, circa 1984. Photo from the Petr Popelar collection via Airliners.net. 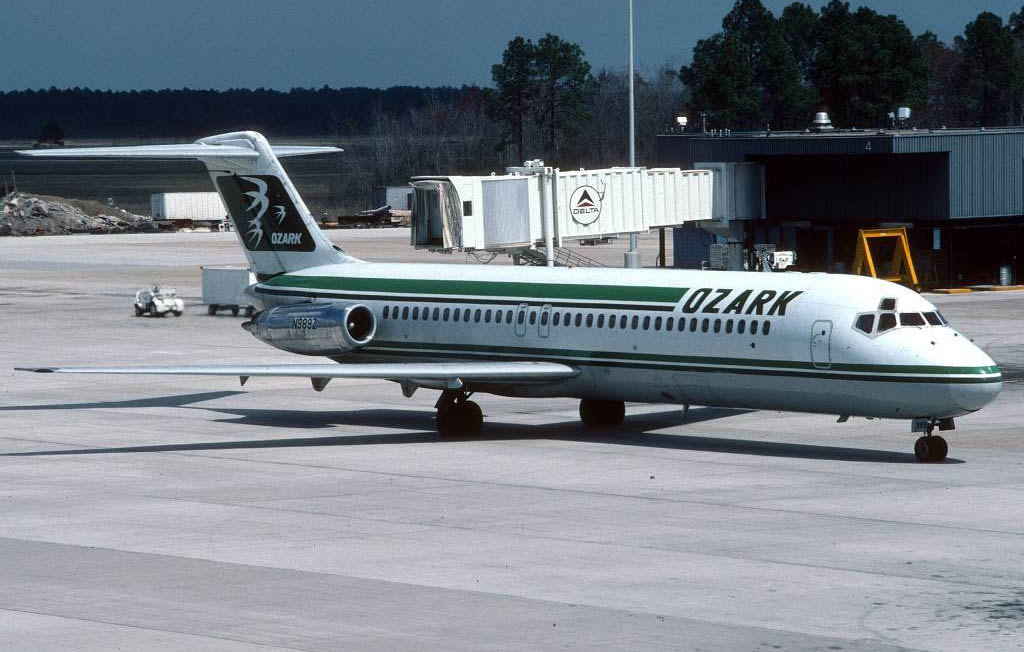 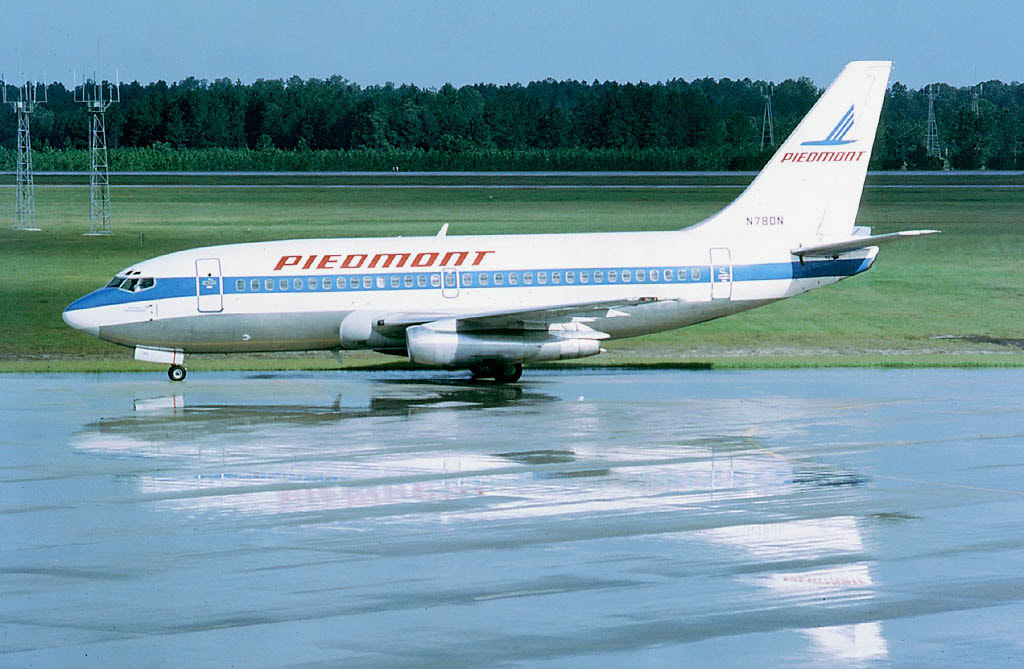 A fantastic aerial photo from October 4, 1984 showing a wide variety of airlines and aircraft at JAX. At far left, a People Express 727 heads out onto the taxiway. In the foreground a PBA Cessna 402 and Martin 404 are parked at the International Arrivals Building, which apparently doubled as a commuter airline terminal. Also seen at the south concourse are a TWA 727 and Piedmont 737. At the middle concourse, a pair of Eastern planes, a 757 and DC-9-50, share space with an American Airlines 727 and Ozark DC-9. A Delta 767 is seen at far right. Photo from the Jacksonville International Airport flickr archives. 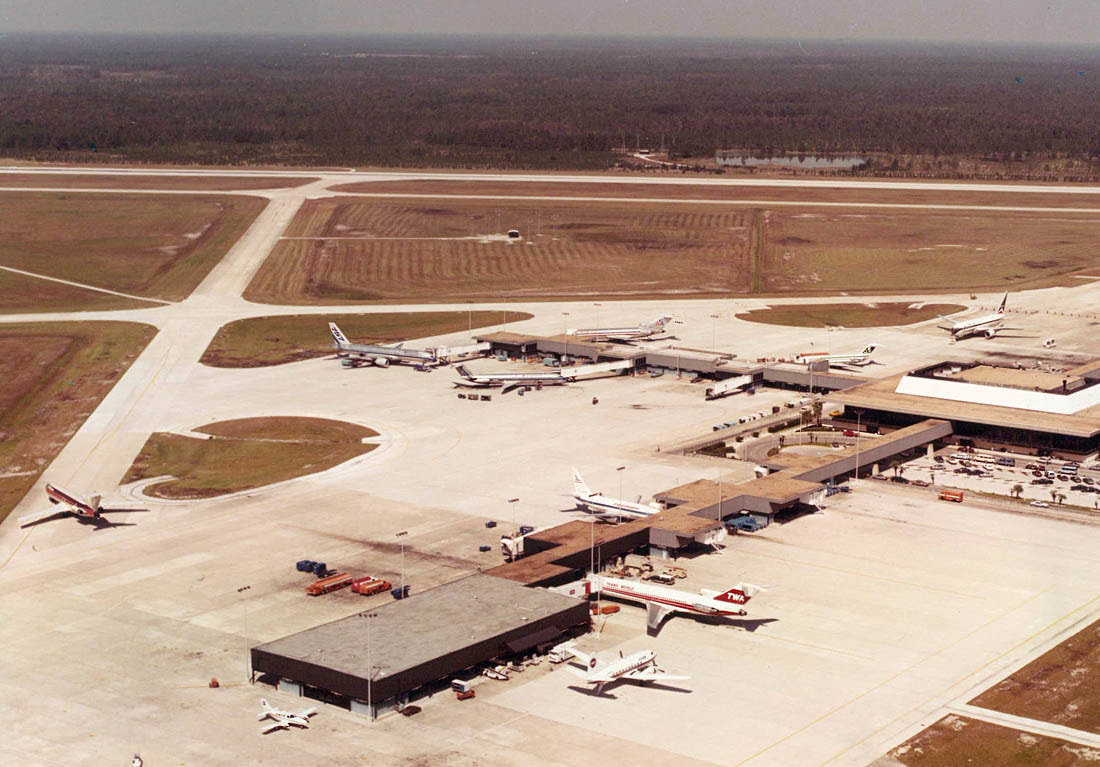 October 4, 1984 view showing the general aviation ramps north of the terminal. Of particular interest are the unidentified Vickers Viscount at bottom left and the DC-3 parked near it. Photo from the Jacksonville International Airport flickr archives. 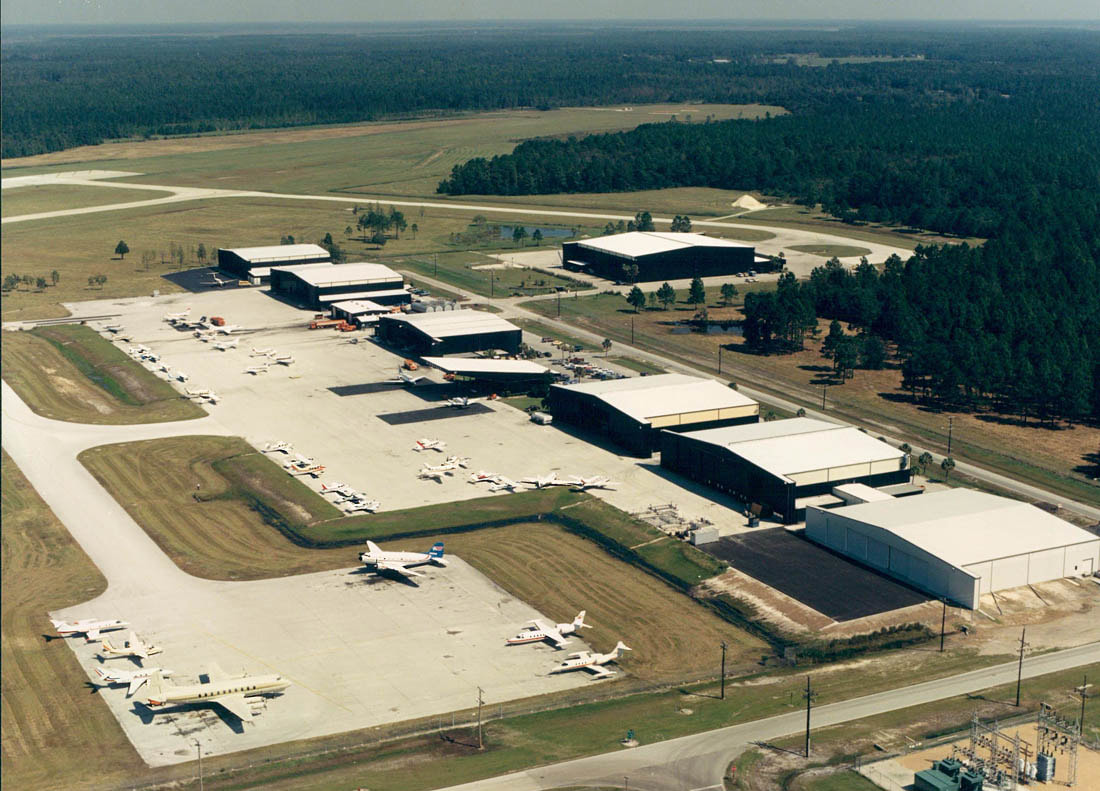 Here's a closer view of the DC-3 seen in the above photo. N8064A was owned by Amerijet International, a charter cargo company. December 4, 1984. Photo taken by Gerard Helmer 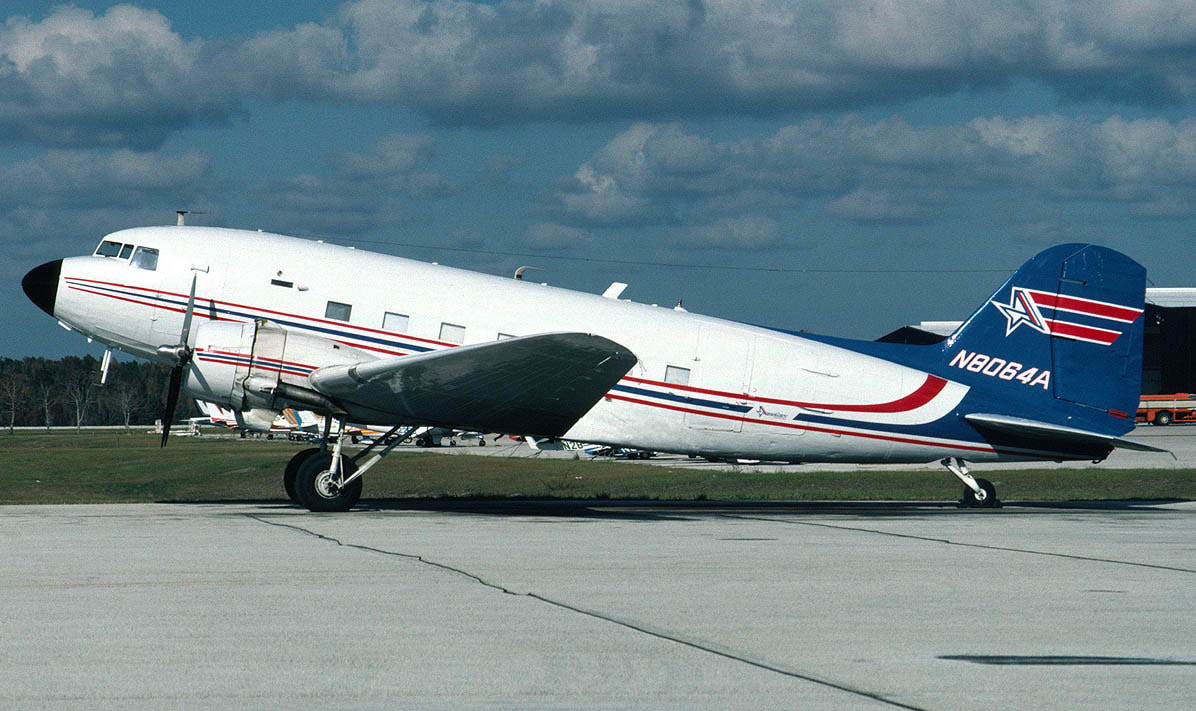 Circa 1986 curbside view of the check-in / passenger drop off on the north side of the terminal. Photo from the Jacksonville International Airport flickr archives. 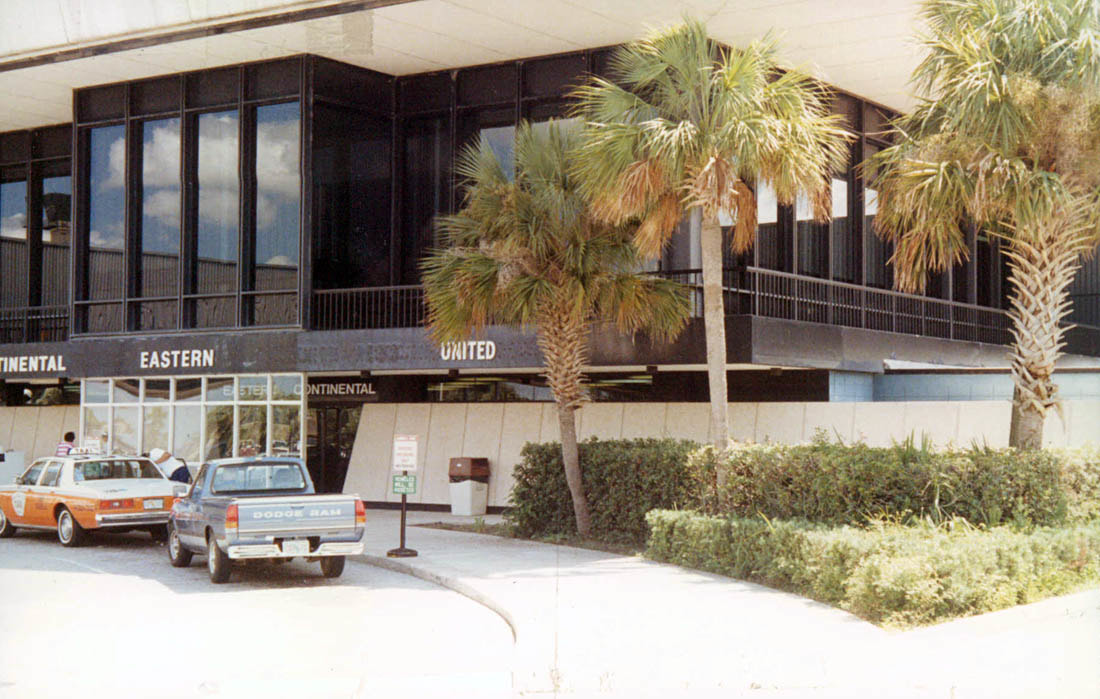 The airline signs from left to right in this photo are American, Ozark, TWA, Piedmont, Delta, Continental, and Eastern. Photo from the Jacksonville International Airport flickr archives. 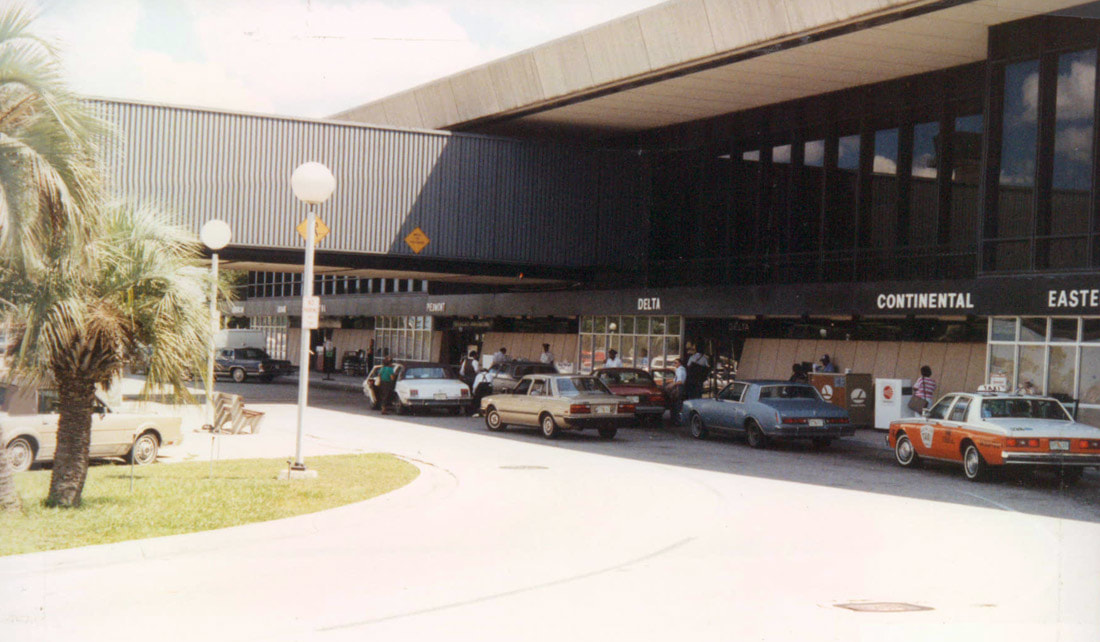 Passenger traffic at Jacksonville International increased approximately 43% during the 1980s and roughly doubled in the two decades since it opened in 1968. By the late 80s, a major terminal expansion was underway and included the extension of two concourses and the addition of a new ticketing and baggage claim building on the east side of the main terminal. This July 3, 1989 photo shows construction of the new passenger lobby and a circular addition to the middle concourse. The recent extension of the north concourse can be seen at right. 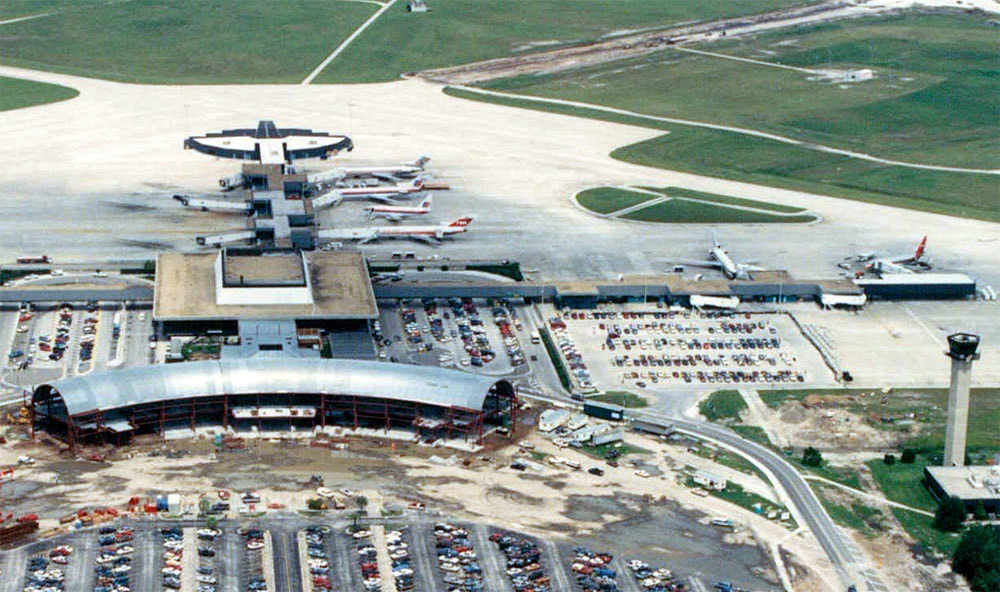 At the end of the 1980s, Jacksonville International was served by 11 airlines: American, Continental, Delta, Eastern, Midway, Pan Am, TWA, United, USAir and commuters Comair (operating as Delta Connection) and USAir Express. You can view detailed JAX flight schedules from December 1989 over at the amazing Departed Flights website. To see more airport histories from Florida and Georgia, click the link below.