Vero Monmouth was the short-lived sister company of New Jersey-based Monmouth Airlines. The airline began scheduled flights on January 13, 1973 when they took over Vero Beach routes abandoned by Eastern Air Lines when the major airline transitioned to pure-jet equipment that was too large for the relatively small Vero market. The Vero Monmouth fleet consisted of a single de Havilland DH-114 Heron, registered N6VM, 2 DC-3s, N2VM and N5250V, plus two Piper Aztecs.

This newspaper clip from the January 1, 1973 edition of Florida Today shows DC-3 N2VM being readied for the upcoming service. Note the unusual enlarged nose which housed radar equipment. 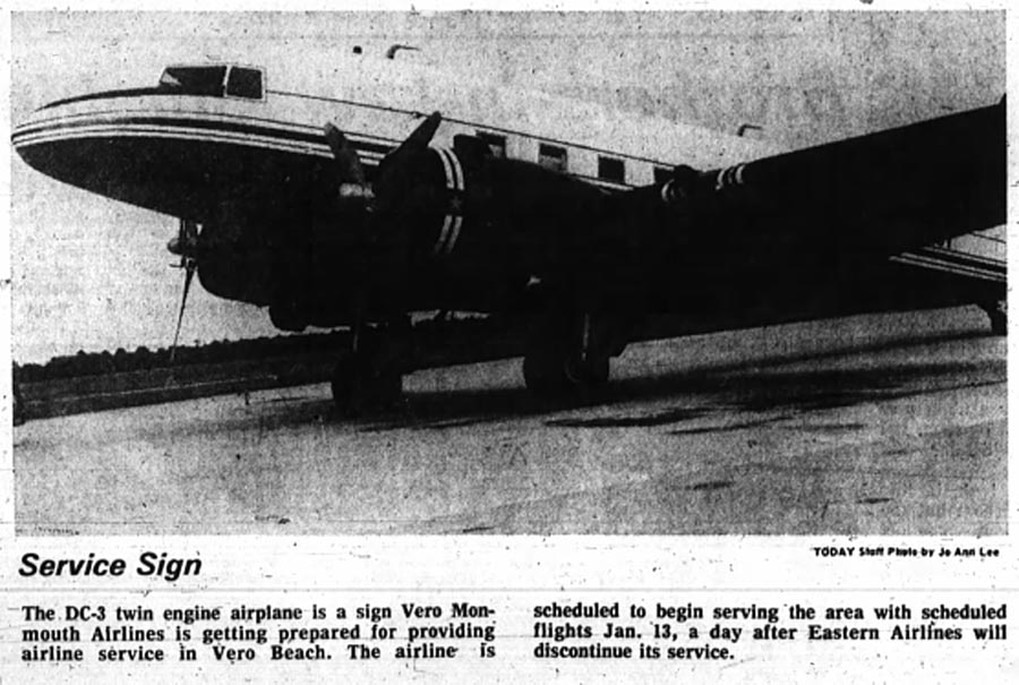 Douglas DC-3 N2VM (msn 13757), fitted with large panoramic windows and sporting a more conventional nose than in the previous photo, was built in 1942. A Martin 404 can be seen in the background. Photo by John Hevesi. 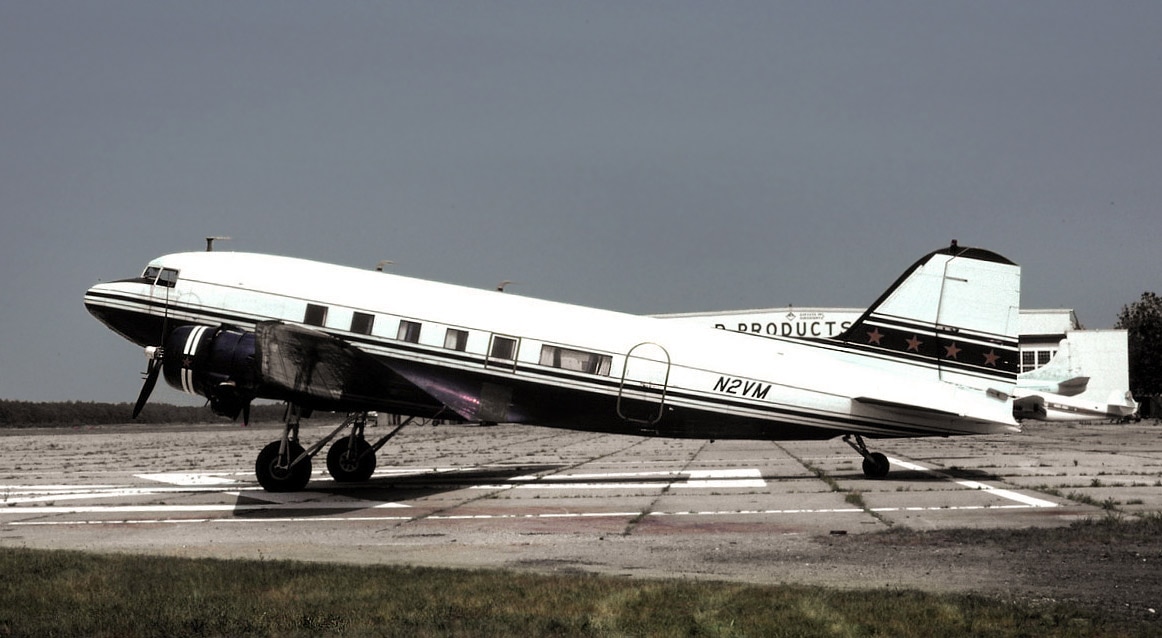 In 2016, I received a series of messages and lots of great info and stories from Charles Reese, Chief Flight Attendant for Monmouth Airlines in 1979/1980. Charles wrote, "N2VM had the ugliest paint scheme know to man, but a beautiful blue and white interior. It was later transferred to the northern operation (also owned by Ed Brown) from Vero Beach to Monmouth County Airport (Belmar NJ). I was their Chief Flight Attendant in 1979/1980 on this aircraft and Martin 404 N149S. I flew the Dalai Lama and (bigoted a**hole) Jerry Falwell in this aircraft. Lots of fun stories. DC-3 N5250V had no interior and was never put into service. Its only "claim to fame" was being used in a Dr. Pepper commercial."
This not-so-subtle reworking of Naples Airline's route map is taken from Vero Monmouth's Summer 1974 timetable. 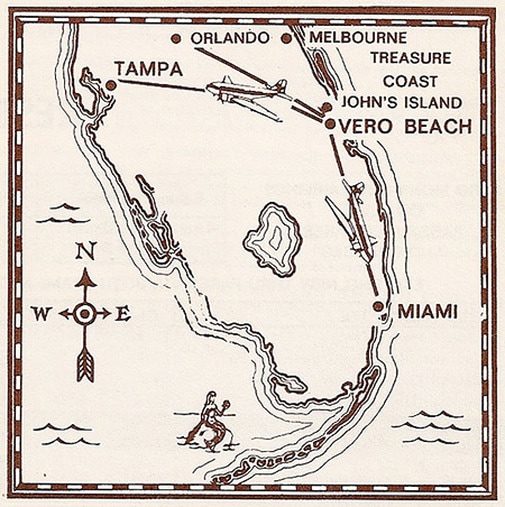 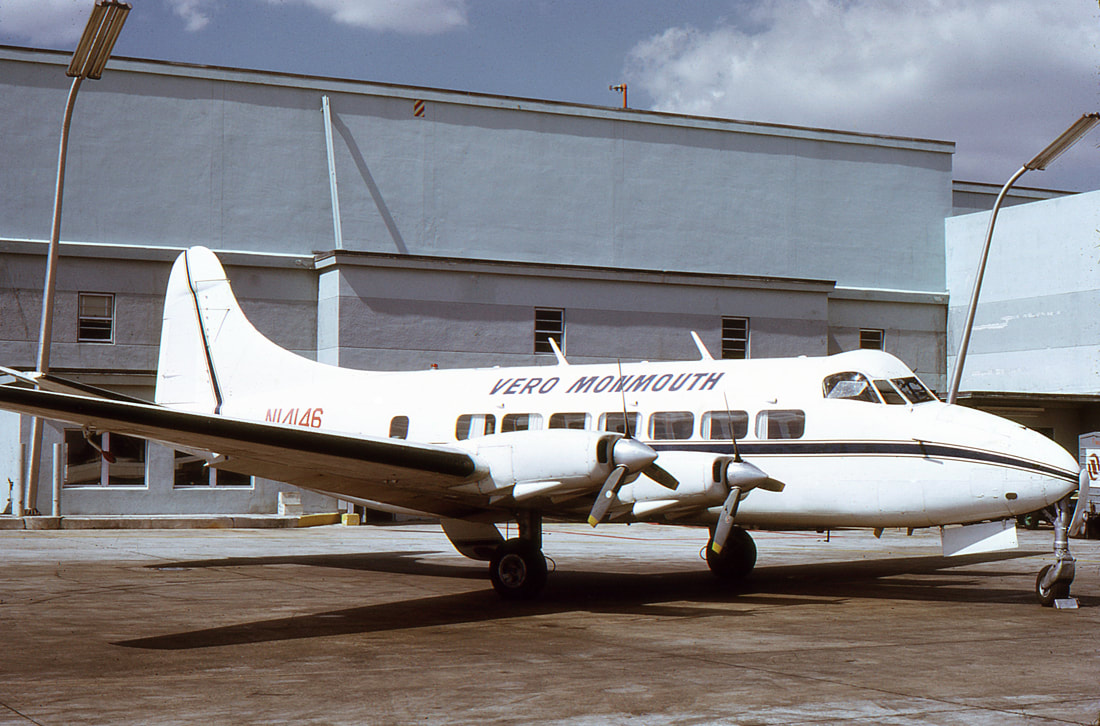 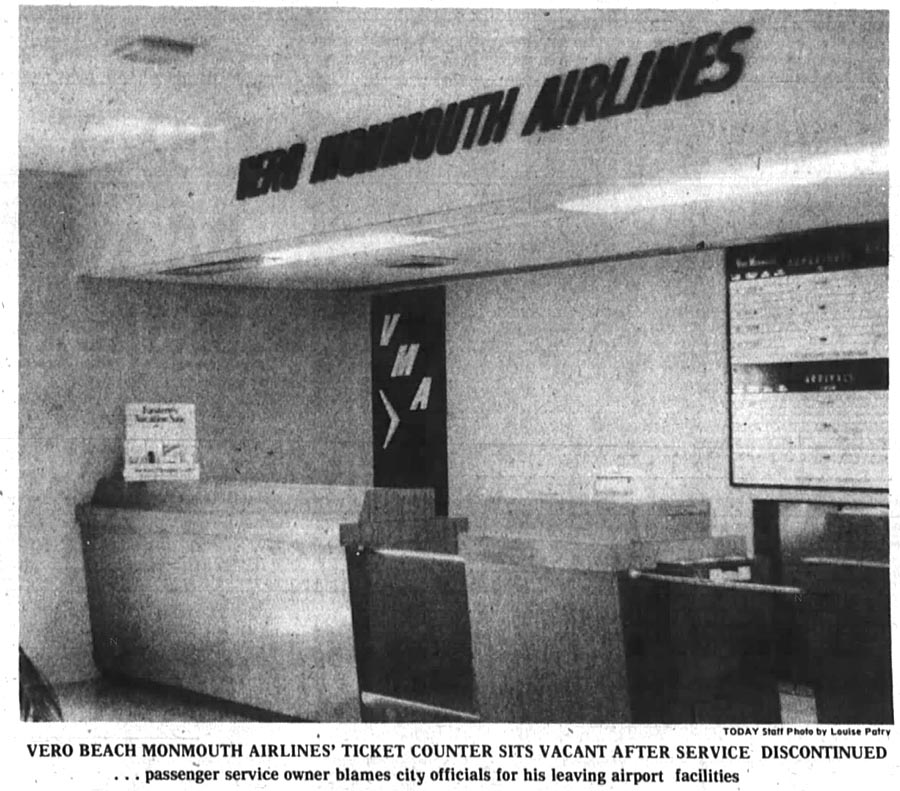 After the shutdown, Vero Monmouth continued as a charter carrier in Monmouth, NJ. Charles Reese, Chief Flight Attendant for the company during 1979-1980, explains the details:

"There were 2 separate airlines with 2 separate operating certificates. Vero Monmouth Airlines operated under Part 121 and owned 3 aircraft: DC-3 N2VM, N5250V and Martin 404 N149S (which joined the fleet in 1979). DC-3 N5250V had no interior and never flew. The Aztecs were operated by the flight school division by the late 1970s and the Heron was long gone. The other airline was Monmouth Airlines which operated on a Part 135 certificate with a single Beech 99 N7099N although it later (totally separate of VMA) gained a Part 121 certificate through the acquisition of Air South. Ed Brown owned the airport as well as both airlines and a Flight School, of which the flight school also operated charters for Monmouth Airlines with its Piper Aerostar and other aircraft. The Monmouth Airlines Part 135 certificate was sold to a company from Connecticut that operated smaller cruise ships (can't remember the name of the company) and its new President was Al Beiga (who went on to work with Allegheny Commuter contractor Crown Airways/Liberty Express). Chief Pilot and Director of Operations for the VMA (Part 121 operation) was Tim Chopp and I was the Chief Flight Attendant.

Incidently, although primarily a Part 121 Supplemental (charter) airline, Vero Monmouth Airlines (VMA) operated the Monday morning and Friday evening scheduled services for "sister" company Monmouth Airlines / Ocean Airways from Monmouth County Airport to Washington National (DCA) either nonstop or via ACY (Atlantic City-Pomona) with DC-3 N2VM or M-404 N149S. Some of the more unique charters were flying lunatic Bible-thumper Jerry Falwell from Lynchburg VA to LGA, the Dalai Lama from Monmouth County to LGA, shuttling the Yugoslav Olympic Team from JFK to Saranac Lake for the 1980 Winter Olympics, and operating under contract to the White House for Mrs. Joan Mondale (wife of the VP) between PHL and Saranac Lake.

DC-3 N2VM was sold to Eugene Plum III who owned two airlines (both shutdown for major safety violations) call Air Pennsylvania and Sun International, the later was based in the Caribbean and for which N2VM operated and crashed and was destroyed in the early 1980s. I trained their Flight Attendants on the DC-3 and was never paid (nor were the trainees). M-404 N149S went to the Reading Aviation Museum and was repainted into original Eastern "Silver Falcon" colors."
RELATED PAGE: History of Airline Service at Vero Beach