On the morning of August 5, 1949, scheduled airline passenger service at Athens, GA began when Southern Airways inaugurated flights between Atlanta and Charlotte with Athens as one of numerous stops along the way. The venerable Douglas DC-3 was used on all flights.

​This first flight cover, carried aboard the aircraft that morning, features a DC-3 following the route from Atlanta to Charlotte with stops at Athens, Greenwood, Greenville, Spartanburg, and Rock Hill. Courtesy of Edwin Bayles. 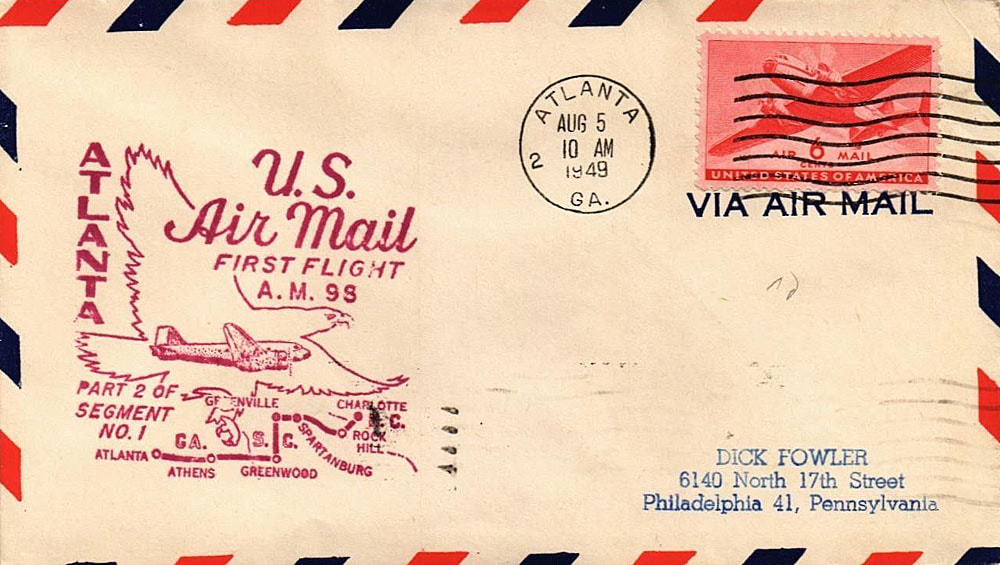 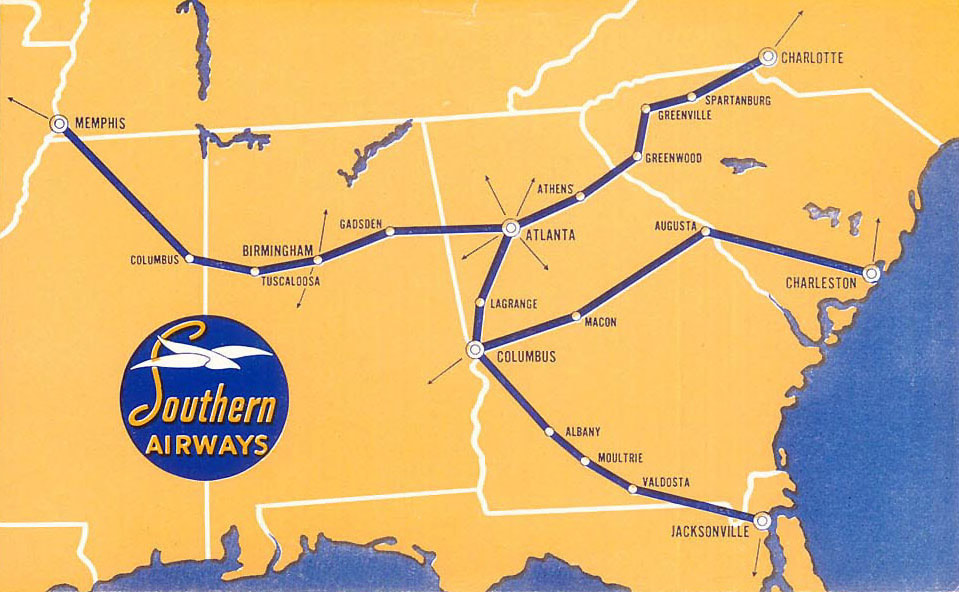 This excerpt from the July 1, 1950 timetable shows four daily arrivals and departures at Athens, two in each direction on the Atlanta - Charlotte route. Scheduled turnaround time at Athens was two minutes! Courtesy of Björn Larsson. 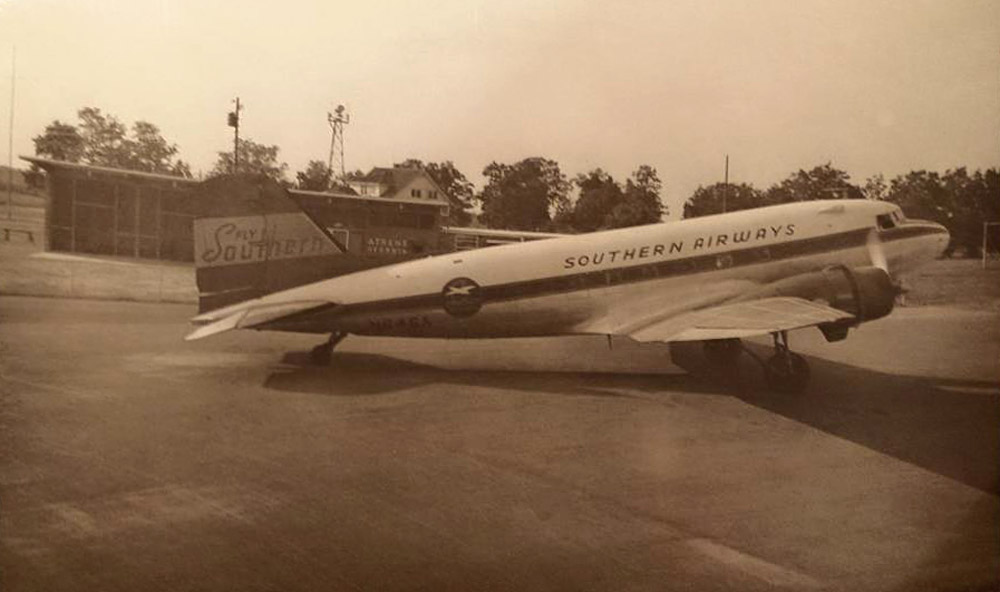 Southern Airways introduced 40-passenger Martin 404 service at Athens in the mid 1960s and continued to fly them to the city until 1977. Jeff Perkins collection. 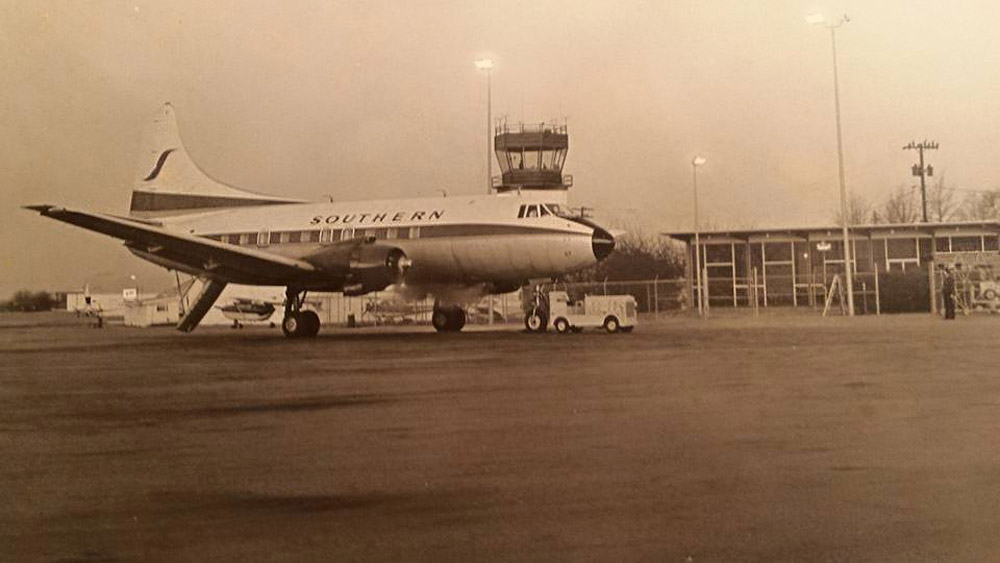 Southern Airways' June 1, 1966 timetable shows an average of five departures a day from Athens: three to Atlanta (the morning flights were flown with DC-3s and the afternoon and evening flights were operated with Martin 404s, denoted by the square next to the flight number), one daily Martin 404 flight to Greenville / Spartanburg, and one DC-3 flight (not shown here) to Anderson, SC continuing on to Greenwood, SC. Timetable image courtesy of Björn Larsson. 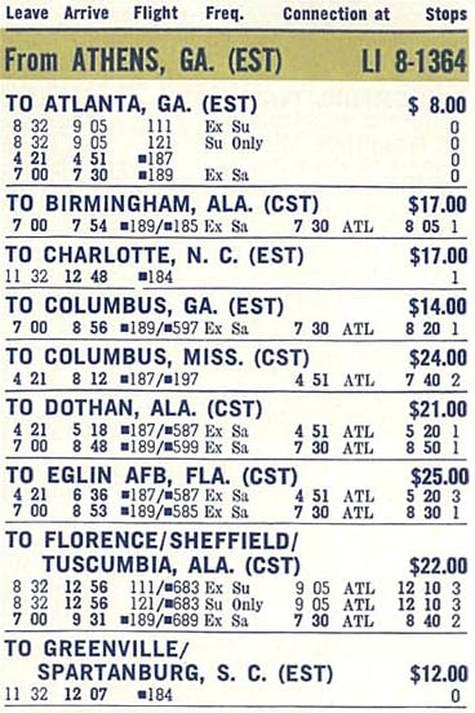 In this undated timetable circa 1968 - 1971, Cherokee Airways operated two round trips between Athens and Atlanta with stops in Jefferson, Winder and Gainesville, GA. 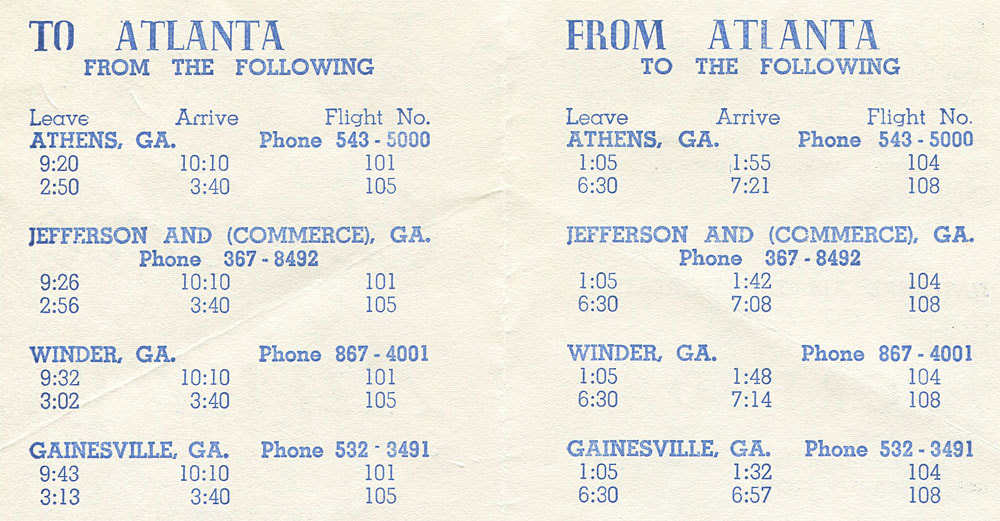 Atlanta-based commuter airline Air South served Athens between September 1969 and early 1970 as a stop between Atlanta and Greenville / Spartanburg. 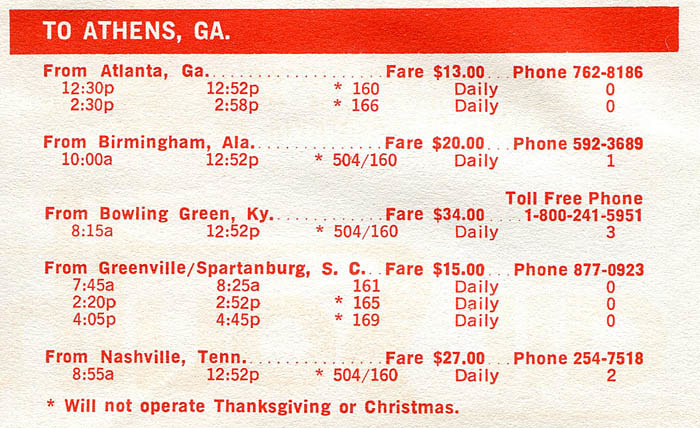 Southern Airways Martin 404 N258S at Athens in October 1973. Photographer William W. Sierra wrote "This was my last trip on a commercial piston driven aircraft. I clearly remember when the pilots stopped to check the magnetos on each engine. Do the old-timers remember this?" 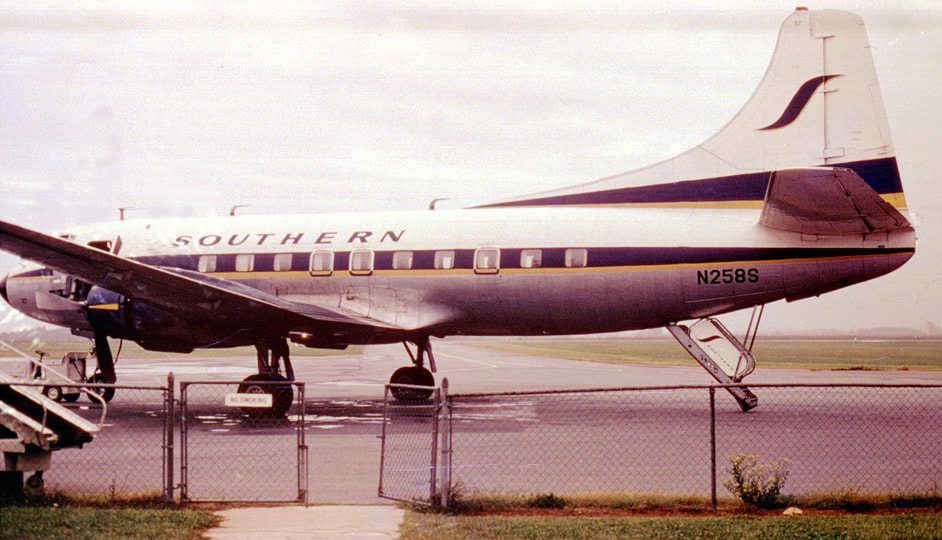 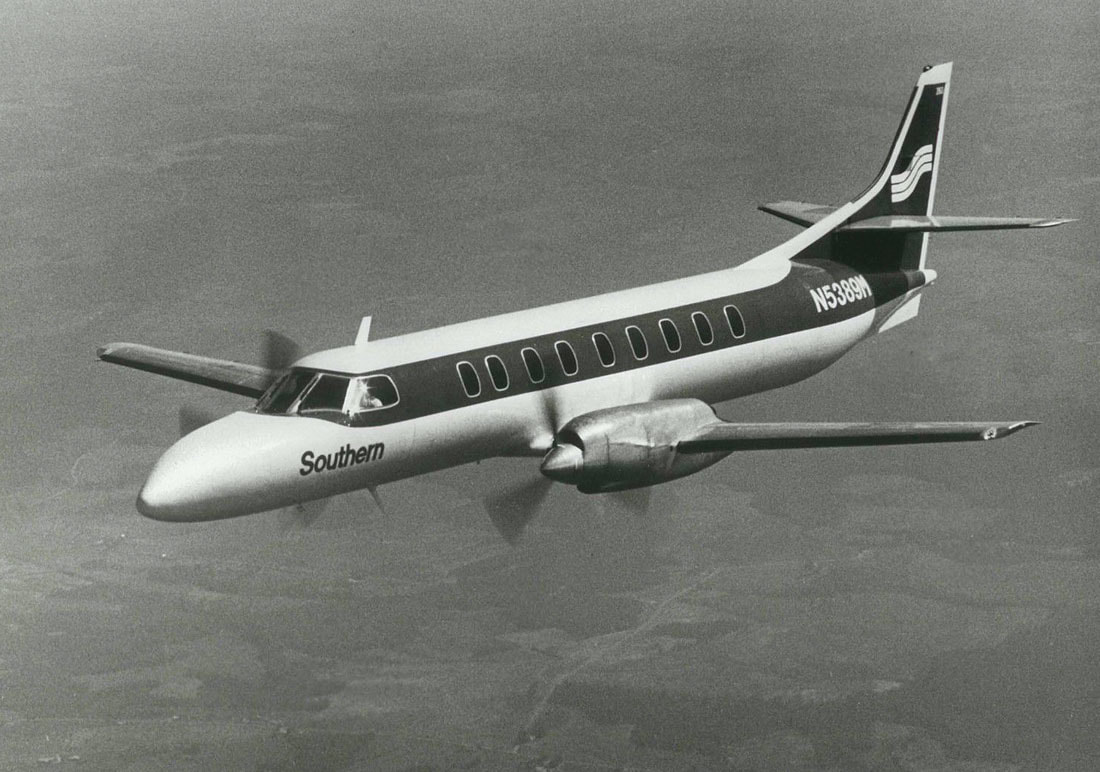 The introduction of the smaller, faster Metroliners allowed Southern to increase flight frequencies between Athens and Atlanta from two to five round-trips a day as seen in their July 1, 1978 timetable. 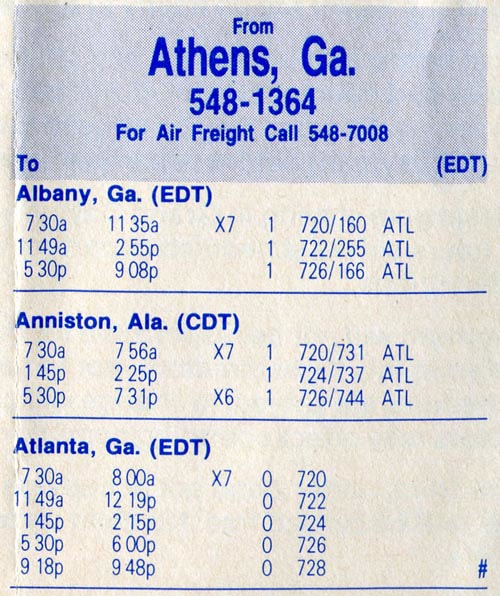 Unfortunately, the new Metroliners quickly became infamous for their poor performance, cramped cabins and unpredictable reliability. Republic Airlines, which was formed when Southern Airways merged with North Central on July 1, 1979, often had to resort to driving passengers to Atlanta in taxi cabs due to frequent mechanical issues. Athens was hit particularly hard by flight cancellations because it is within relatively short driving distance of ATL and shorter flights were often sidelined to keep flights to more distant cities operating. Grounded Metroliner flights became so frequent (over 30 percent) that the situation made the front page of the Atlanta Constitution on August 8, 1979. 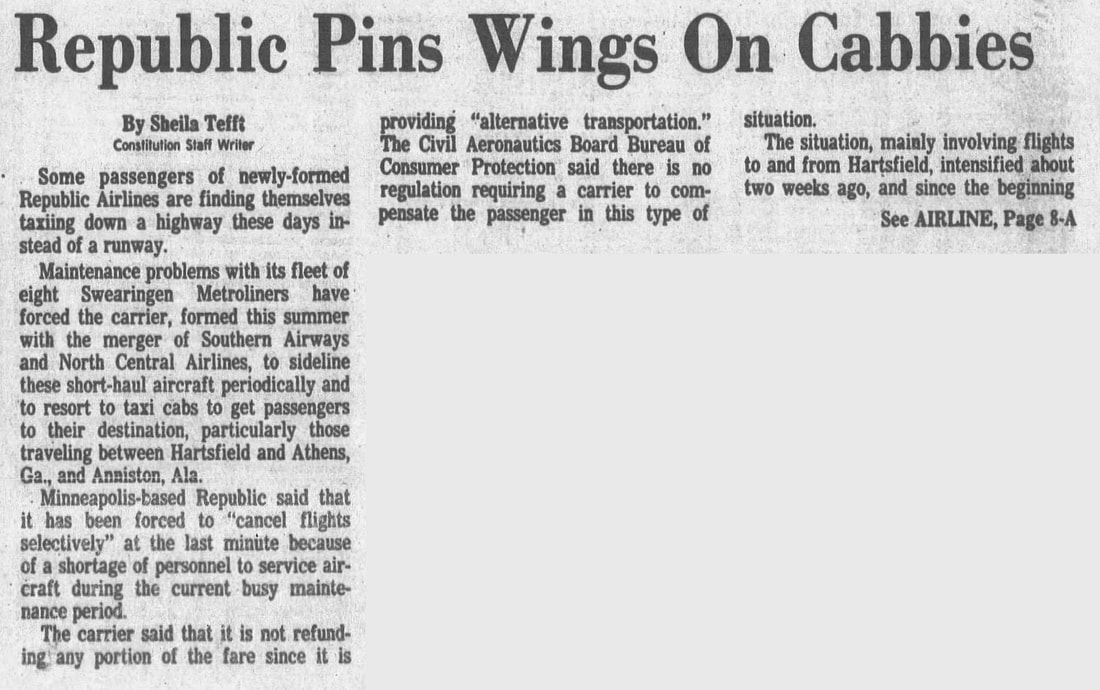 With complaints and bad publicity intensifying, Republic replaced the Metroliners with 48-passenger Convair 580 turboprops on all flights at Athens beginning on Monday, August 13, 1979. This was the largest aircraft type to serve Athens on regularly scheduled passenger flights. Below, N4811C is pictured at the gate in Atlanta in the early 1980s. This photo is from the collection of Flickr member EX/ZX. (If you have any photos of a Republic 580 at Athens, please contact me!) 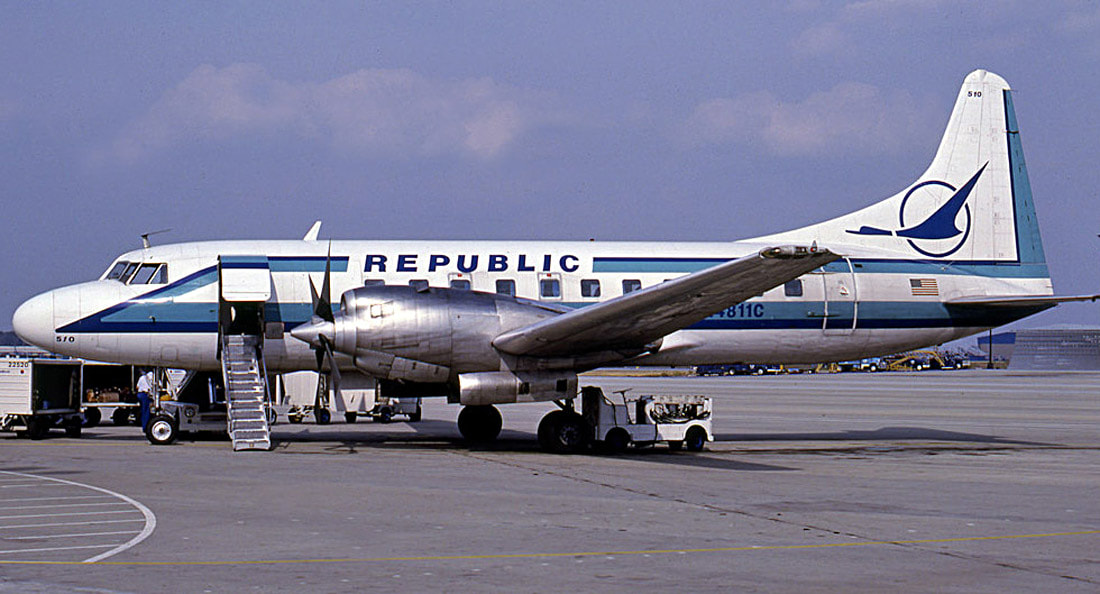 With the arrival of the large Convair 580s, service was reduced back to the two-flights-a-day level that Southern flew with the Martin 404s. This is from Republic's timetable effective September 5, 1980. 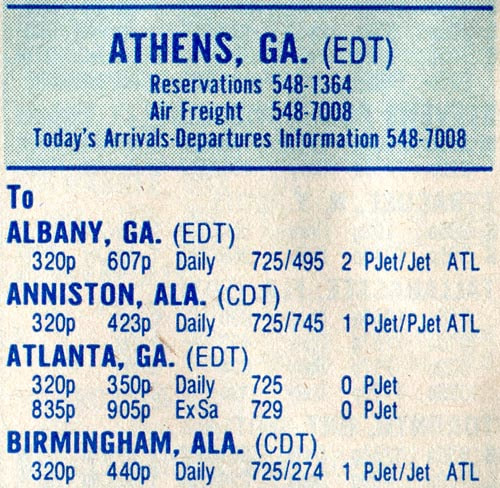 Atlantic Southeast Airlines began flying to Athens on September 1, 1980 with four weekday and two weekend round trips using 19-seat de Havilland Twin Otters. ASA, barely over a year old at the time, had already experienced great success with their new service in Columbus and Macon.
The November 15, 1980 issue of the Official Airline Guide shows six flights a day between Atlanta and Athens:. Republic operated two Convair 580 flights while ASA Twin Otters made 4 round trips on weekdays. 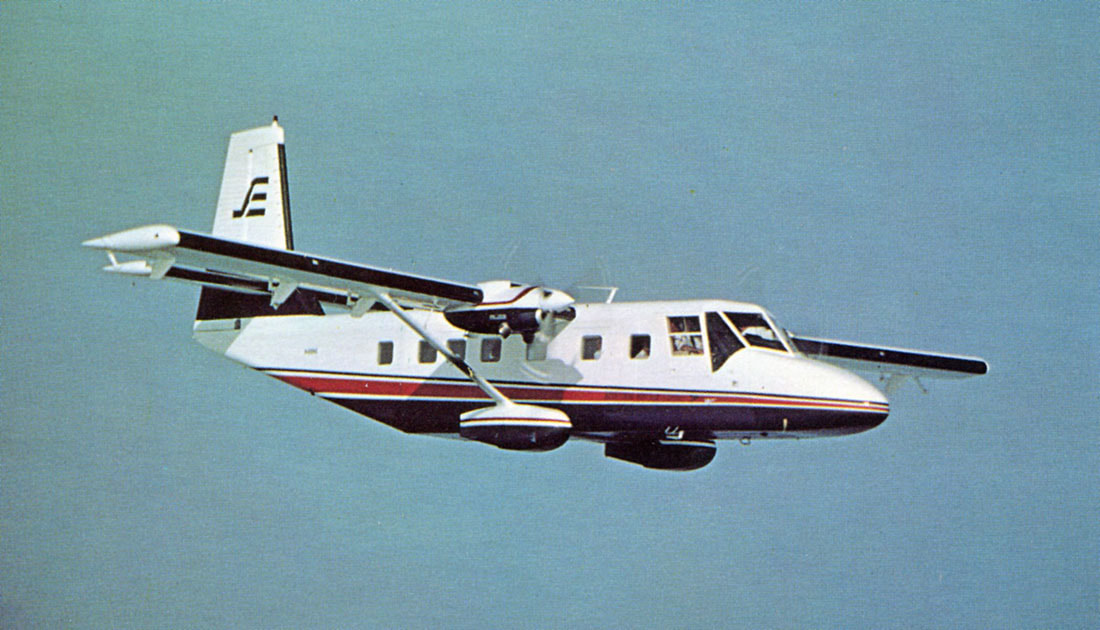 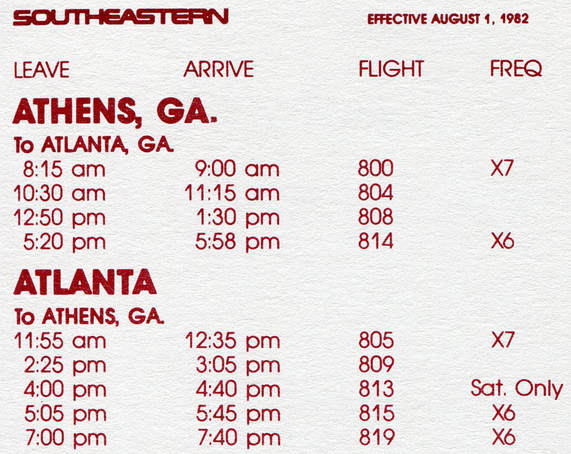 ASA absorbed Southeastern Airlines on April 1, 1983 and once again found itself serving the "Classic City". ASA's May 13, 1983 timetable shows four weekday round-trips flown with a combination of Embraer Bandeirantes and Twin Otters. ASA, operating as a Delta Connection carrier, continued to serve Athens into early 1985.

Sunbird Airlines inaugurated service to Athens from both Atlanta and Charlotte on November 1, 1984 using Beechcraft B99s.

Sunbird's November 1, 1984 timetable shows an average of three flights a day at Athens.

Sunbird Airlines became a "Piedmont Commuter" airline on May 1, 1985, with a primary focus on feeding traffic into Piedmont's Charlotte hub. 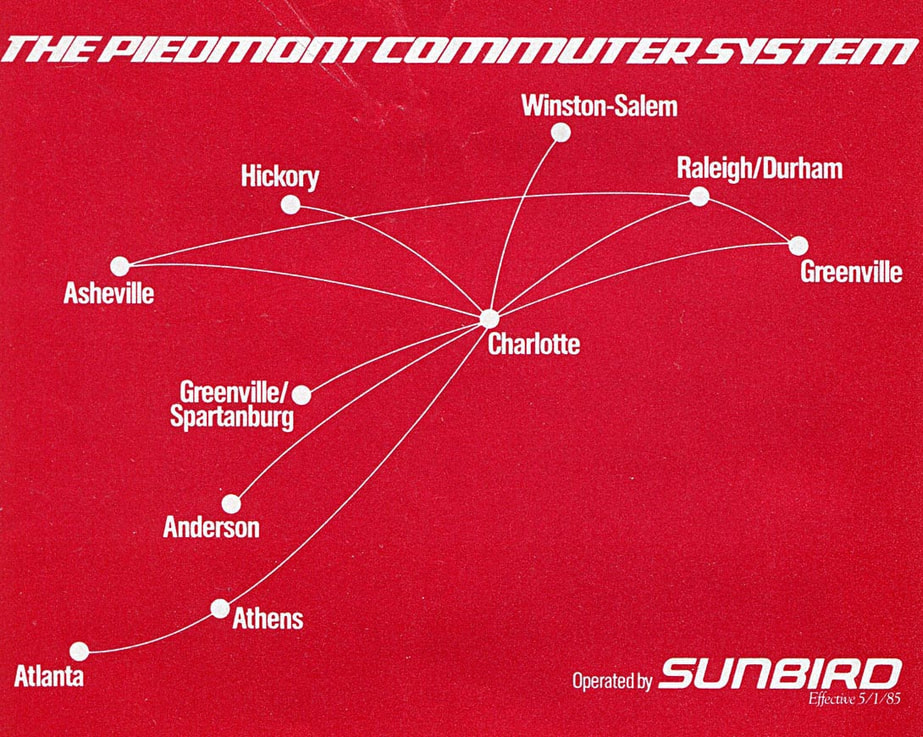 Piedmont's May 1, 1985 timetable shows six weekday departures from Athens, all operated by Sunbird. 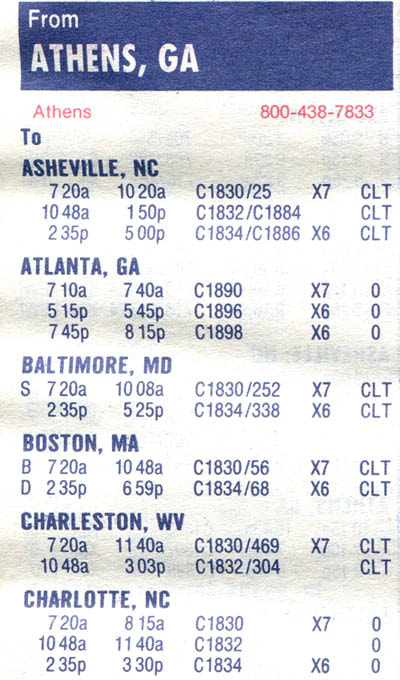 With the departure of ASA from Athens in 1985, Sunbird introduced the 30-passenger Shorts 330 on flights to Atlanta and Charlotte in addition to the Beech 99s. Sunbird's N332SB is pictured in full Piedmont Commuter colors in this postcard view. 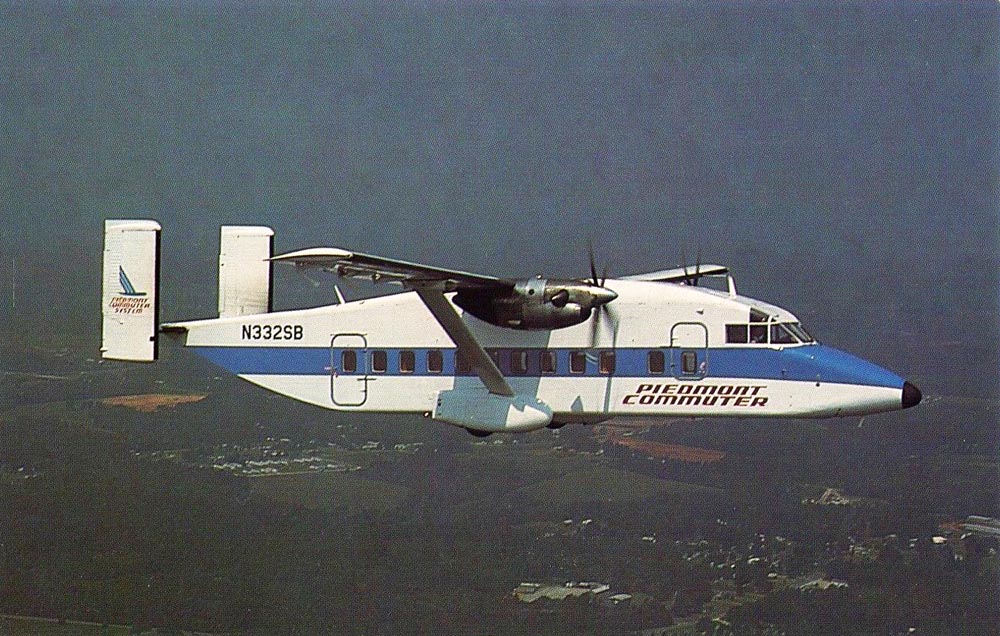 Sunbird became CCAir ( "CC" stood for Carolina Commuter) on January 1, 1986 and continued to focus on funneling traffic into Piedmont's Charlotte hub. This map is from Piedmont's March 2, 1989 timetable. 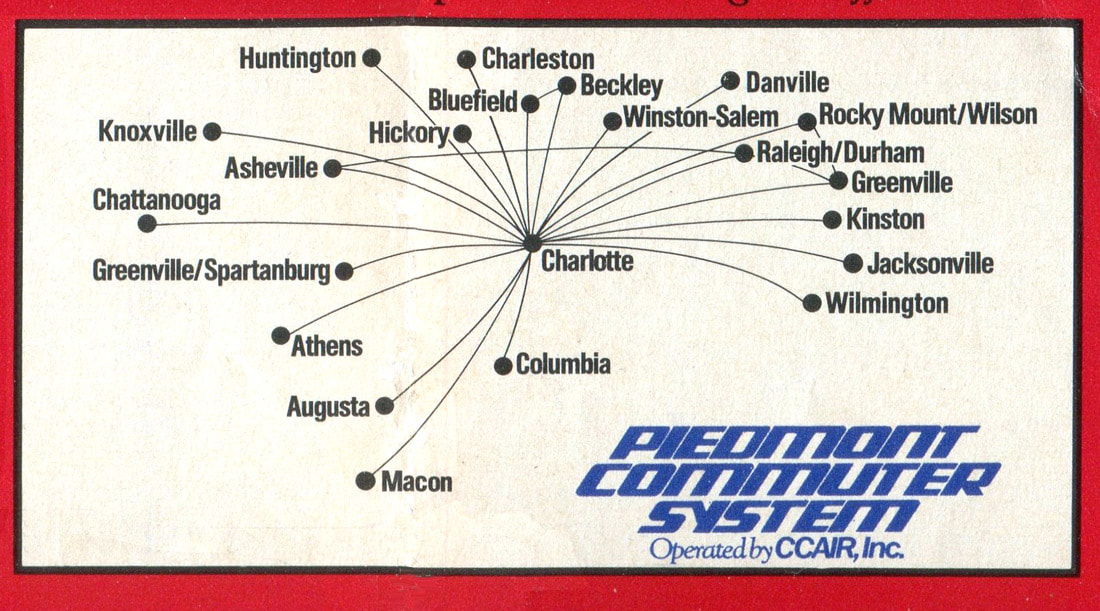 Piedmont's March 2, 1989 schedule shows as many as seven flights a day from Athens to Charlotte, NC flown with a combination of British Aerospace Jetsream 31s and Shorts 330s. CCAir carried a combined total of nearly 40,000 passengers to and from Athens that year. 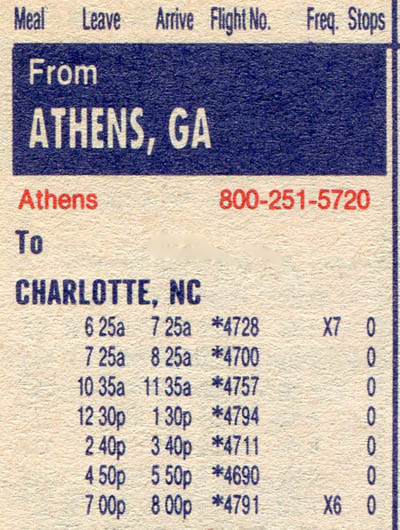 Piedmont was merged into USAir in August 1989. CCAir continued to provide commuter service to Athens through the 1990s.
Skybus Express briefly flew between Athens and Atlanta during 1991 using GAF Nomads. The service only lasted a few months. 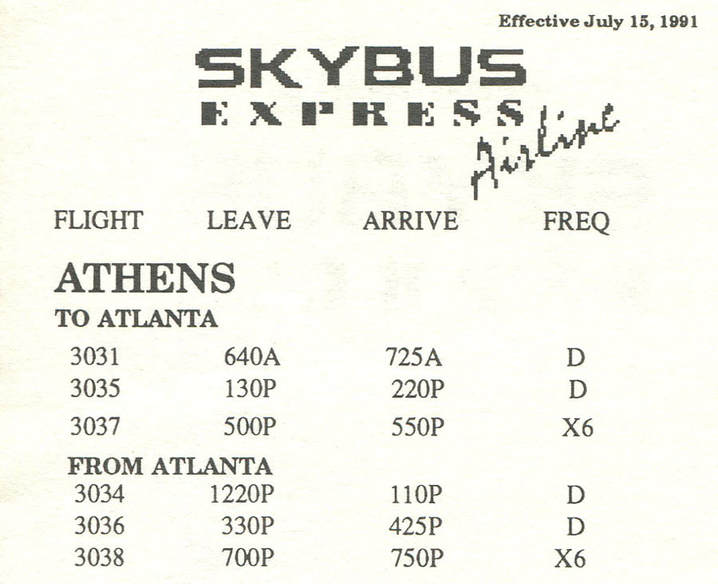 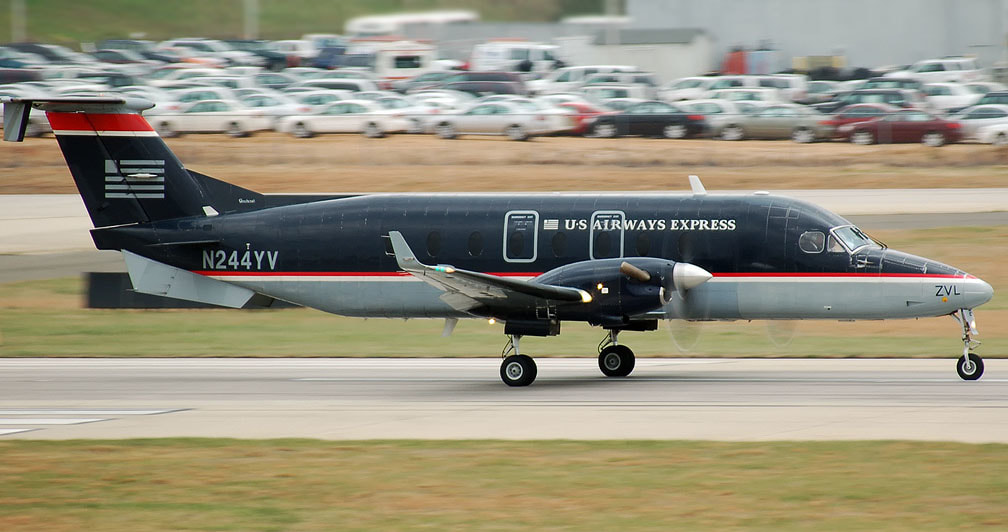 The March 15, 2006 schedule shows service reduced to two flights a day between Athens and Charlotte on weekdays.

Air Midwest, facing declining boardings and record high fuel costs, ended flights to Athens-Epps Airport on May 23, 2008. Since the flights were subsidized as part of the Essential Air Service program, which supports unprofitable air service for small and medium-size airports, the DOT began reviewing bids for a replacement airline. Three companies proposed flights between Athens and Atlanta: Pacific Wings, operating as Georgia Skies, Wings Air and Florida-based Vintage Props and Jets.
On May 29, the DOT announced that Georgia Skies had been chosen to provide subsidized Essential Air Service to Athens for a two-year period using 9-seat Cessna Caravans.
Despite their winning bid, Georgia Skies was unprepared to begin service for several months. A losing bidder, Lawrenceville, Georgia-based Wings Air began unsubsidized flights between Athens and Atlanta in June 2008 with one flight a day, four days a week. By September this had increased to three flights a day, four days a week with two flights on Saturdays. Wings Air argued that the EAS decision be reversed and that Georgia Skies should be denied subsidy because of their inability to fulfill their obligations. These complaints were to no avail. 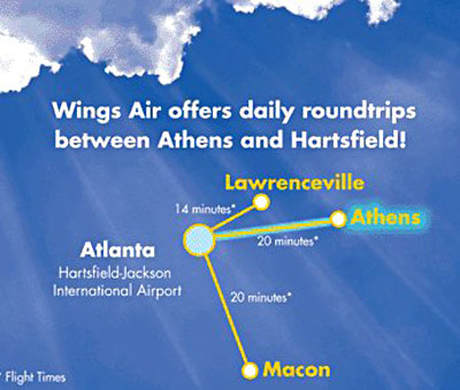 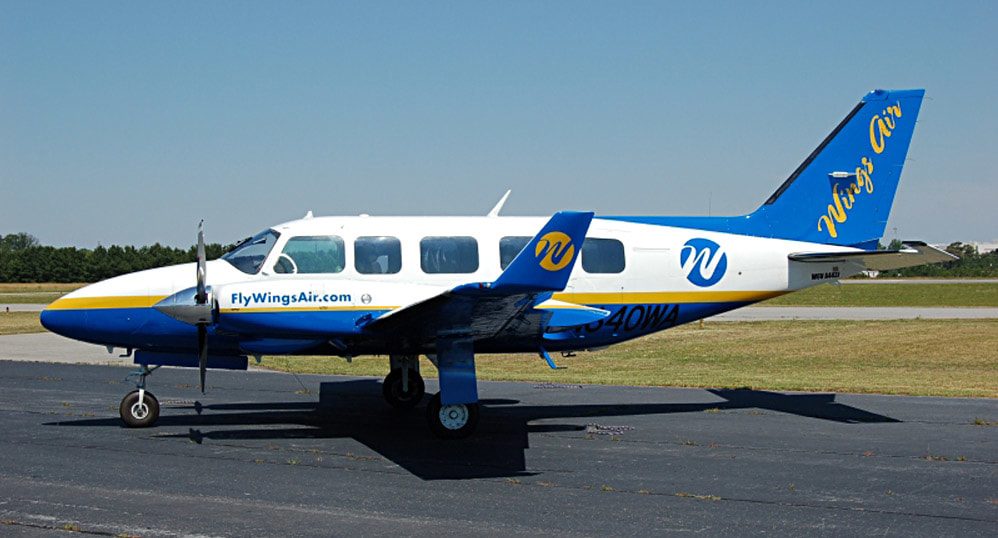 Georgia Skies finally inaugurated service to Athens on September 29, 2008. Their December 8, 2008 timetable shows as many as six departing flights a day.
Georgia Skies Cessna Caravan "EcoJet" N307PW on the ramp at Athens. This photo was part of an eye-opening Atlanta - Athens trip report posted on Airliners.net. 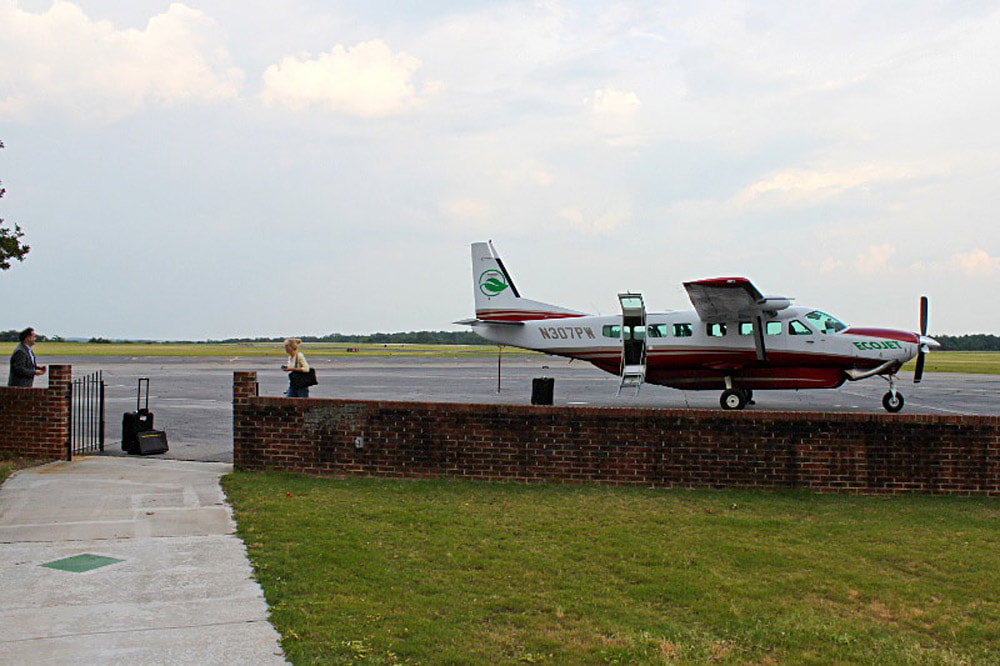 Georgia Skies' Athens service was plagued by problems from the very start. The airline was unable to secure a gate at Atlanta and was forced to park at a remote general aviation ramp on the north side of the airport, requiring shuttling the passengers by van to the aircraft. The airline also did not have TSA security screening at Athens, which meant that passengers had to re-check their bags and go through security upon arriving in Atlanta. Georgia Skies also faced harsh criticism from passengers, city and airport officials and frequent articles in the Athens Banner-Herald concerning their poor customer service, erratic flight cancellations and lack of professionalism. (The trip report mentioned previously makes the situation crystal clear.) In 2010, the airline was chosen for a second two-year contract. Traffic continued to plummet.

SeaPort Airlines replaced Georgia Skies as the EAS carrier at Athens on November 1, 2012 with non-stop service to Nashville, TN. 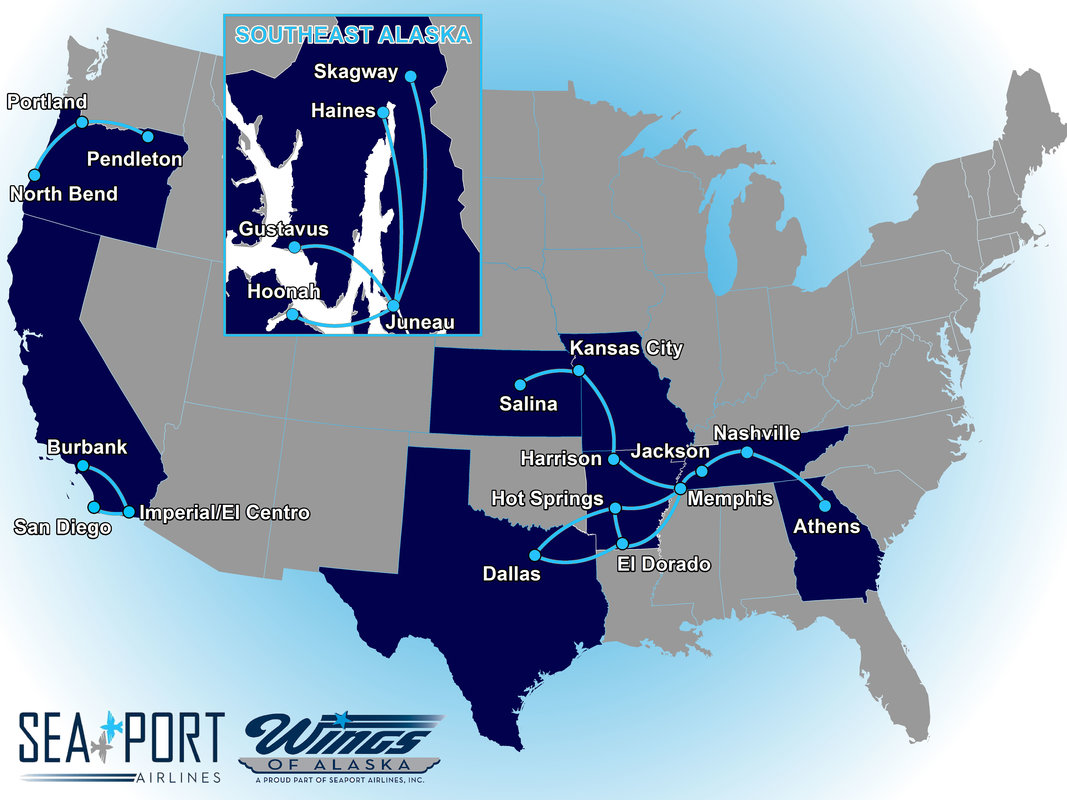 SeaPort's Athens - Nashville schedules effective November 1, 2012 show two flights a day during the week and a single round-trip on Saturdays and Sundays. 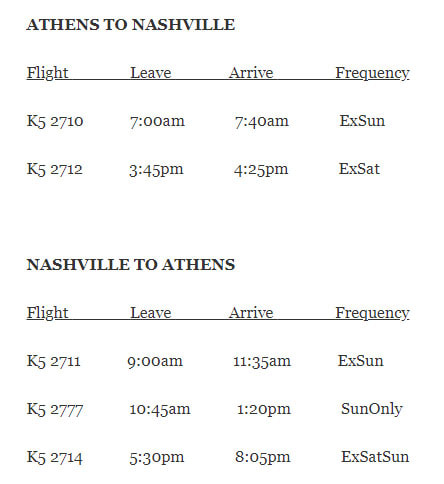 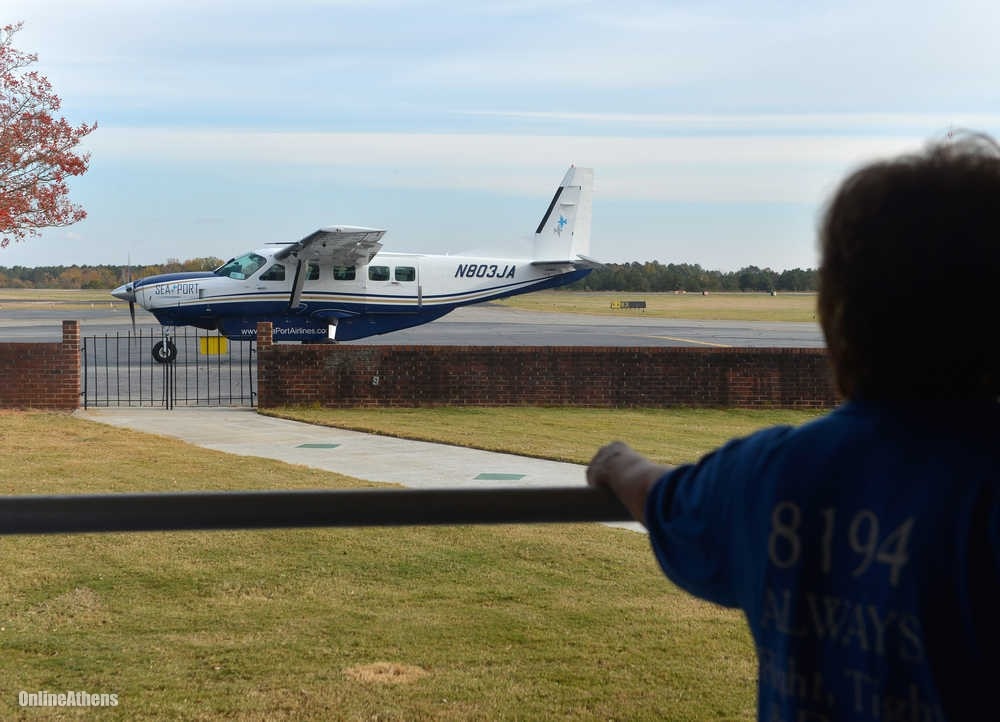 In March 2014 Seaport was operating only eight flights a week from AHN. On April 1, 2014 this was increased to two flights a day during the week and one flight a day on weekends. 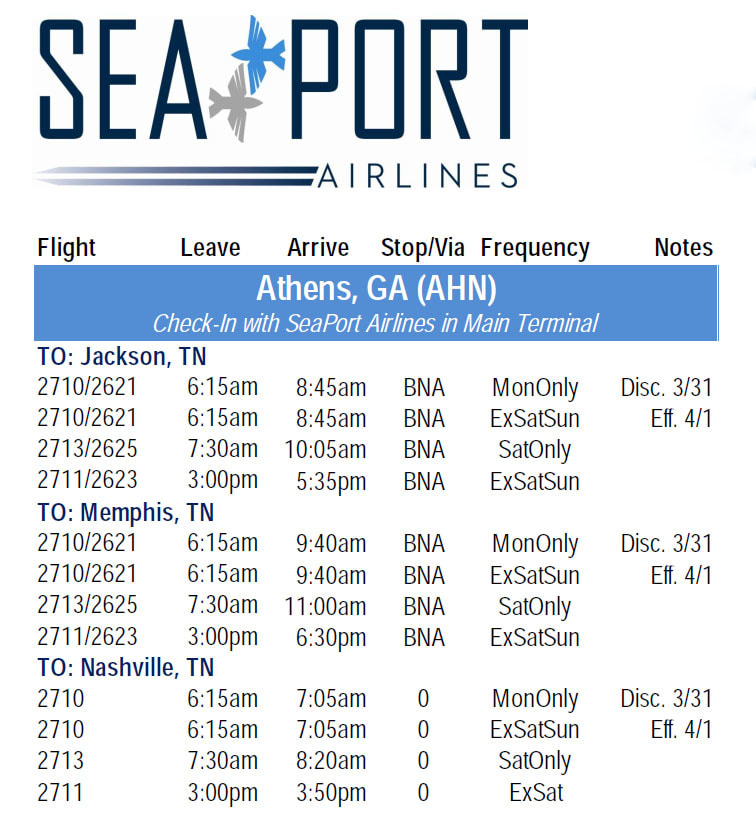 While traffic increased significantly after SeaPort's arrival in Athens, boardings were still below the 10 passengers per day minimum required to continue to qualify for Essential Air Service subsidies. The DOT announced that the $1.6 million annual subsidy would be discontinued at the end of Seaport's Athens contract and scheduled passenger came to an end on September 30, 2014.

It has now been over four years since Athens last saw scheduled passenger airline service. City officials have attempted to attract another air carrier such as American Eagle with financial incentives but without success so far. With ever increasing air traffic and delays at Atlanta, it seems pointless to try and continue single-engine Cessna flights into nearby connecting hub airports. Considering the massive student population at University of Georgia and Athens' proximity to Atlanta's eastern suburbs, the time could be right for low-fare regional jet service to the northeast or Florida, similar to what Contour Airlines has achieved at Macon, GA.